Hello friends,
After completing the 2600 mile Pacific Crest Trail in 2013, I decided to start a blog, to record my experiences as a long distance hiker, as well as make mention of some of my other adventures. As I write, I am completing my preparation to hike the Appalachian Trail beginning in the spring of 2015.

I began running rivers at age 14. My first trips were on the Colorado River, through Glen Canyon, now Lake Powell. The rivers were so fascinating for me, that after four years of college, I decided to make river running my life's profession. I quit school, incorporated a river company with the name of  World Wide River Expeditions, with operations centered in Moab, Utah and commenced an action packed, roller coaster ride of adventure that lasted well over 30 years. As a company, we added mountain bike tours to our offering of wilderness experiences. In 1988, I appropriated one of these bikes and rode it cross-country, from the Pacific to the Atlantic. This endeavor took four summers.

The bike ride was an incredible experience, a wonderful way to see rural America up close. If the Atlantic Ocean hadn't been there, I would have continued my ride on to England and Ireland; but the ocean was there and I could go no farther. In my mind, I thought to myself, Richard, you know how to row a boat, why don't you just build a row boat, and row it across the ocean and complete the bicycle journey. And so I did.

With the help of a yacht designer in London, England, who supplied me with plans for a boat, I spent three years in my workshop building a very high-tech, ocean going rowboat, and launched it off the coast of Portugal in the fall of 1998. 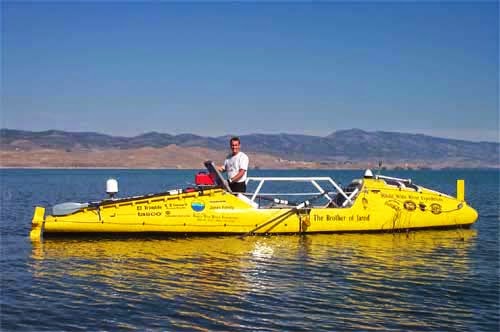 Hurricane storms were still battering the Portugal coast, making progress south towards the Canary Island precarious. I pulled the boat off the ocean and elected to try another time.

In the fall of 2000, I shipped the boat back across the Atlantic, this time to the Canary Islands. I launched from the Canaries and began a 4,000 mile journey across the ocean - with Miami, Florida being the destination. As fate would have it, I was shipwrecked on a little island in the Bahamas, only 400 miles from Miami, when the boat overturned and all the electrical equipment, equipment that was vital to the success of the journey, was destroyed. I was rescued from the island by a passing freighter.

In 2000, just before leaving for the ocean, I sold the river business to my Moab managers. After the ocean voyage, I opened an online store, along with a retail store, to sell outdoor camping and backpacking equipment. When my lovely wife Jodie was accepted as a doctoral candidate at the University of Utah, I shut down the stores and moved back to Salt Lake. Now I hike, and restore Model A Fords.


My hiking goal is to become a triple-crowner. I completed the Pacific Crest Trail in 2013 and this year, 2015 will give me the Appalachian Trail, and next summer, 2016 I'll start the Continental Divide Trail - New Mexico to Canada, only 3,000 miles. My ultimate hiking goal is to complete the 800 mile Hayduke Trail that traverses the Red Rock country and canyons of southern Utah and northern Arizona. I considered the Hayduke Trail to be the most brutal and hazardous trail to navigate.

As a side note, I like kittens and a peanut butter and apricot/pineapple jam sandwich is my favorite meal.

Email ThisBlogThis!Share to TwitterShare to FacebookShare to Pinterest
Labels: About Me
Newer Posts Older Posts Home
Subscribe to: Posts (Atom)