Where is Rabbit Stick now is a never ending question when following my blog. To facilitate this question, I have created this page, titled RABBIT TRACKS which is a link to a Google Map that will show my daily progress along the Appalachian Trail. At my wife's insistence, I carry with me a small tracking device called a SPOT. It gives her peace of mind as she can see where I am at all times. She would know if I tried to sneak off to Atlantic City for a day of sight seeing. 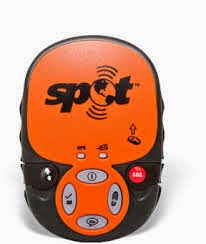 It is programmed to send a signal to an overhead satellite every ten minutes, with my GPS coordinates bundled with it. These coordinates are then displayed as a footprint on a the Google Map and throughout the day, as I travel, the footprint will progress up the trail. The SPOT tracking featured is turned on at the beginning of my hiking day, and turned off at night to conserve battery power. My wife can track me almost in real time. The SPOT operates on three Lithium AAA batteries and will last approximately four day. I carry spare batteries with me, and always receive a new batch when Jodie sends me a resupply package.

In addition to tracking my whereabouts, if I have an emergency, there are two help buttons I can activate. One is for friends and family only. If activated, it sends a message to family members that I need help but not the kind necessary to alert a full-blown search and rescue effort (SARS). The other help button is an emergency SOS alert. Once activated, this will notify the local sheriff's department, the ones most likely to initiate a SAR operation that I'm in dire straits and emergency help would be greatly appreciated. When the SAR team receives the alert, they will also have my GPS coordinates.

In 2013, when the Australian PCT hiker Muk Muk had an encounter with a cougar, after several hours of being stalked by the animal, (she was in her tent and the big cat wouldn't leave, he was playing with here), she activated her SPOT SOS button. A SAR helicopter eventually showed up, as did two SAR team personnel who hiked to her location.

The tracks on the Google map are only good for seven days, after which they are deleted as new tracks are formed. I hope you enjoy this feature of Rabbitstickchronicles.com.