I didn’t know if I had arrived at McDonald's before my friends or not, but as I exited Aloha’s car and shouldered my pack to enter the restaurant, Ken and Lois Cutler walked up behind me.  They had been sitting in their car in the parking lot, saw me get out of Aloha’s car, and recognized the North Face orange-colored, short-sleeve shirt I’d been wearing since day one.  We embraced, sort of.  I apologized to them for the way I smelled; it’s just something that went with the territory.

Hikers acquire a certain, unfamiliar aroma about them after being on the trail for a while; it’s called "ripeness."  Hikers get used to the smell, and are not offensive to one another, but it’s hard on others when they come into our presence.

We entered the restaurant and sought out an empty booth.  The place was packed with other hikers, all enjoying the cool, air-conditioned air, and slurping cold drinks and chocolate milk shakes.  It was noisy with chatter as the hikers conversed with one another.  It was apparent they were enjoying this brief respite from the severity and harshness of the trail.

Ken asked me if I’d like something to eat and drink, and I told him anything as long as it included a giant-size chocolate milk shake.  He left and made his way to the counter to place the order.  As I was sitting in the booth, looking around at the various hikers, most of whom I recognized by face and not by trail name, my eyes lit upon a somewhat familiar figure standing in the middle of the dining room.

To my astonishment, it was my wife, Jodie.  Stink or no stink, I rushed to embrace her.  It was a total surprise to see her; I had no idea she would be coming with the Cutlers.  We hadn’t even discussed the possibility in our phone conversations, but the Cutlers felt it was important for us to have the opportunity to visit with one another, so they convinced her to fly to San Diego and stay with them in their condo.

Stacked in front of me were the empty containers from Big Macs, cold drinks, chocolate shakes, and fries.  Undoubtedly, I had consumed a couple of thousand calories at this one sitting, and I enjoyed every bite; with the number of calories I burn each day, I can afford to eat like this.  However, I can only imagine what happens to people’s bodies who don’t exercise like hikers do, and who eat this much high-caloric food at one sitting.

In previous phone conversations with Jodie and the Cutlers, in answer to their question, “Are you having fun?” my response to them was in the form of an analogy that I called the Fun Meter.  I told them the negative side of the meter could be represented by a man digging a six-foot-deep sewer trench in the hot sun, while the positive side would look like the four of us enjoying a frosty mug of Hires Root Beer and a large order of fries at our favorite air-conditioned restaurant in Salt Lake City.  As we’re sitting in the booth and they’re watching me consume my Big Mac and fries and enjoying the cold chocolate shake with whipping cream on the top, I told them the Fun Meter has gone off the charts.

Seated across the aisle in another booth were Cookie and Nurse Betty, and across the floor, chatting with other hikers, was Peter Pan.  Cookie and Nurse Betty knew each other from work, and together they have been hiking with Peter Pan.  I introduced Jodie and the Cutlers to the three girls, and we all posed for pictures using each other’s camera.

Anytime hikers come to a place that has electricity, they’re on the alert to find outlets to recharge their electronic devices.  For some reason, this McDonald's, in addition to having outlets in the walls where one would normally expect to find them, also had outlets in the tiled ceiling.  Looking around the room, I could see several cell phones dangling from recharging cords plugged into ceiling outlets, like so many Christmas ornaments.
Jodie had reserved a room at a motel across the Interstate, which was a most welcome and refreshing break after days on the trail.  While I showered, she put my clothes and sleeping bag in the laundry.  I’ve never seen such black water go down a drain hole as what I observed in my shower stall.  Showered and clean-shaven – I chose not to grow a beard during the hike, the Cutlers, Jodie, and I ventured out to see the countryside. 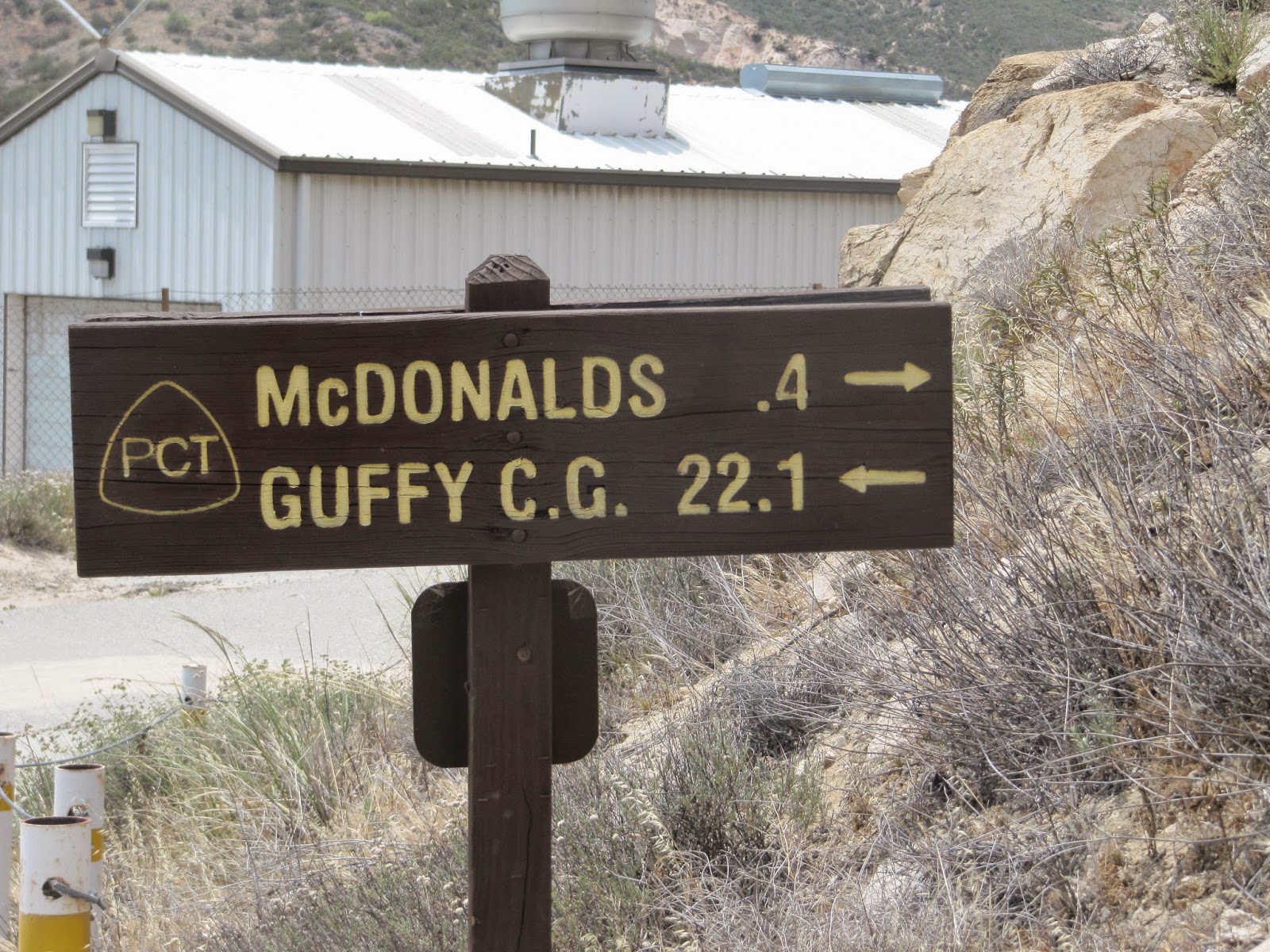 The trail ends at parking lot, with this sign to greet the weary hiker. 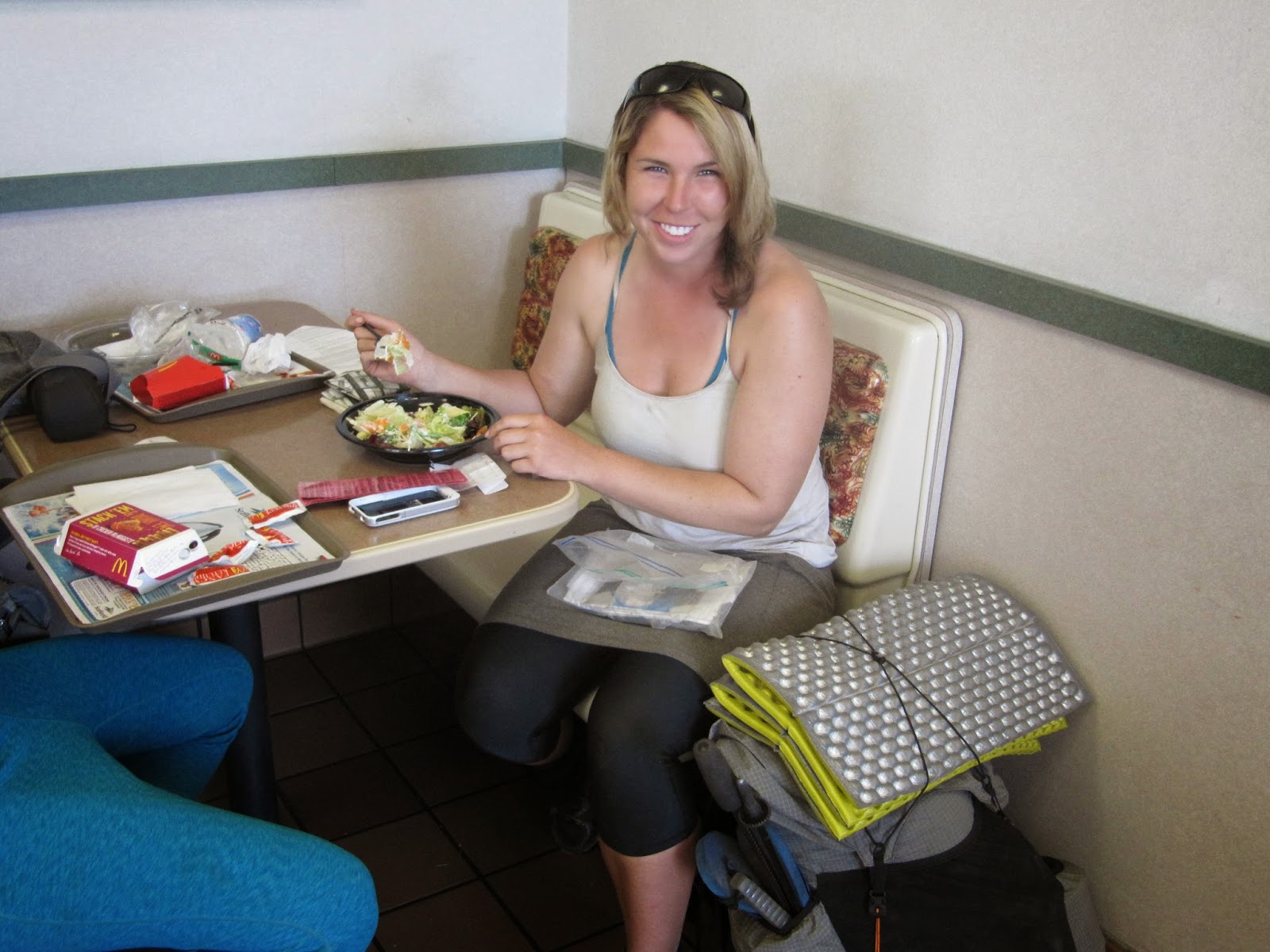 Jess, aka, Night Crawler is already in the restaurant, going to town on her 2nd helping. 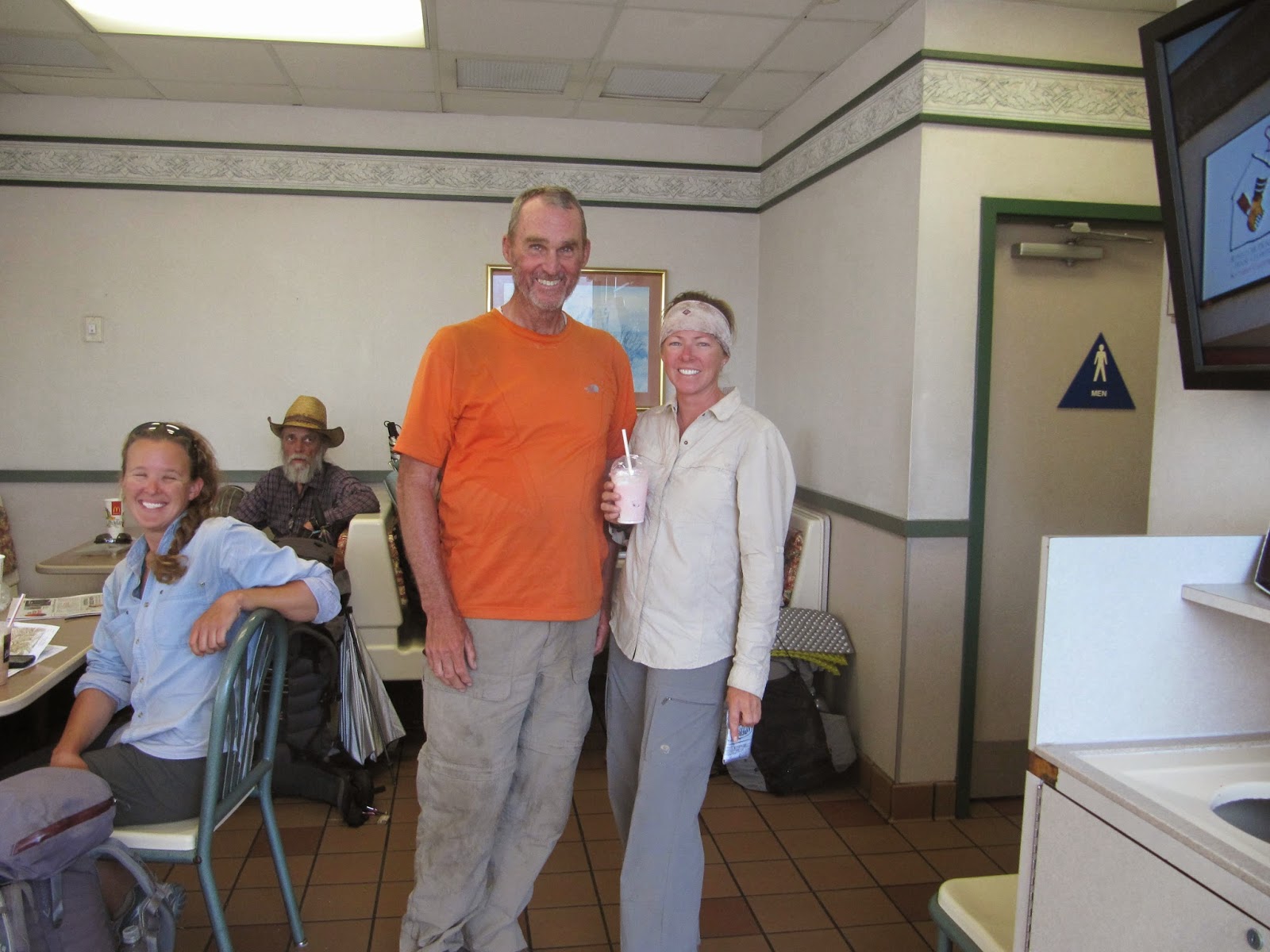 Cookie, myself and Peter Pan.I was intrigued with Perter Pan's pants, as they were made with Elastine. I would end up getting a pair just like them in Bend, Oregon, at the REI store. 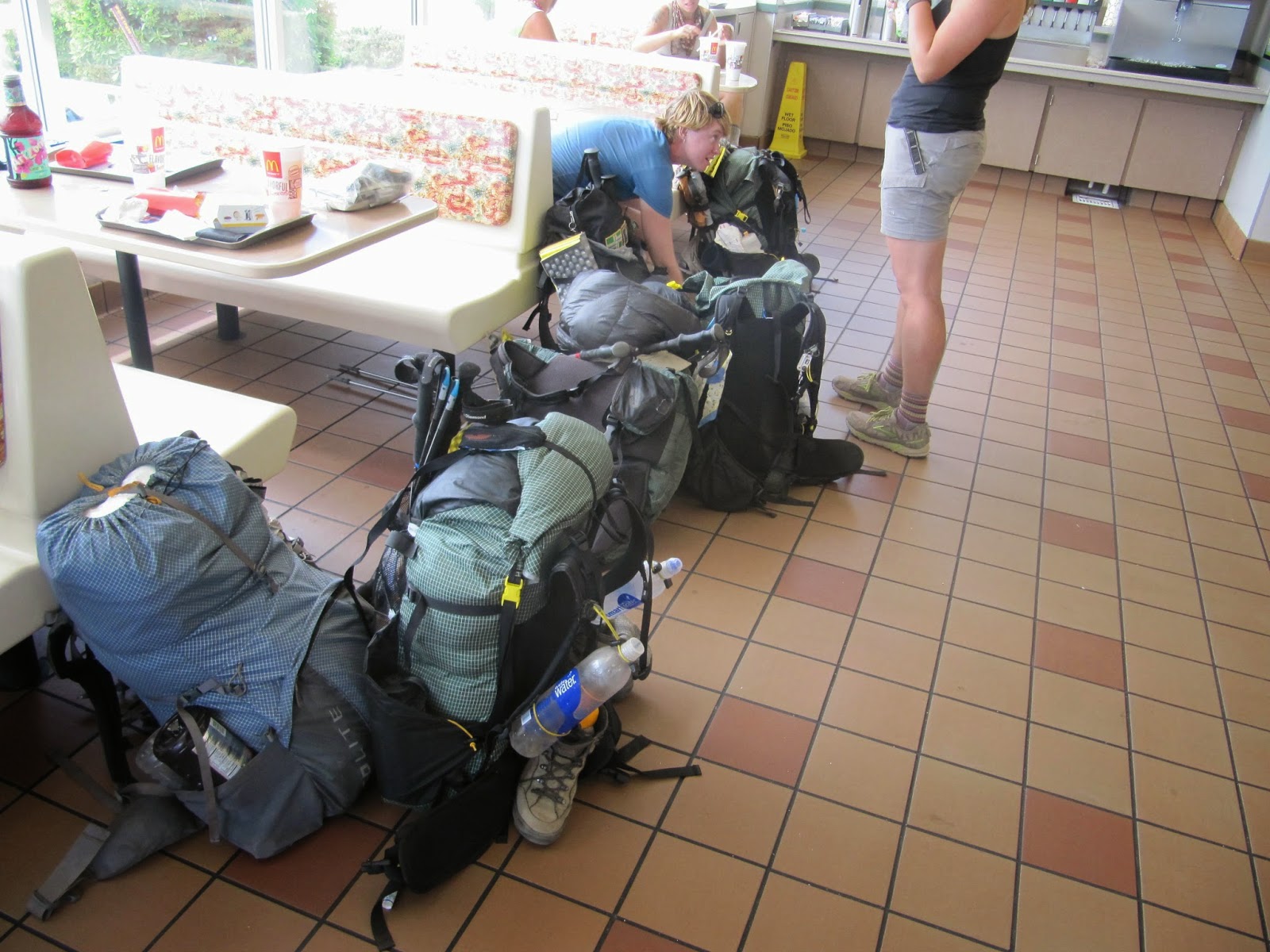 Hikers set their packs on the floor while they go stand in line. 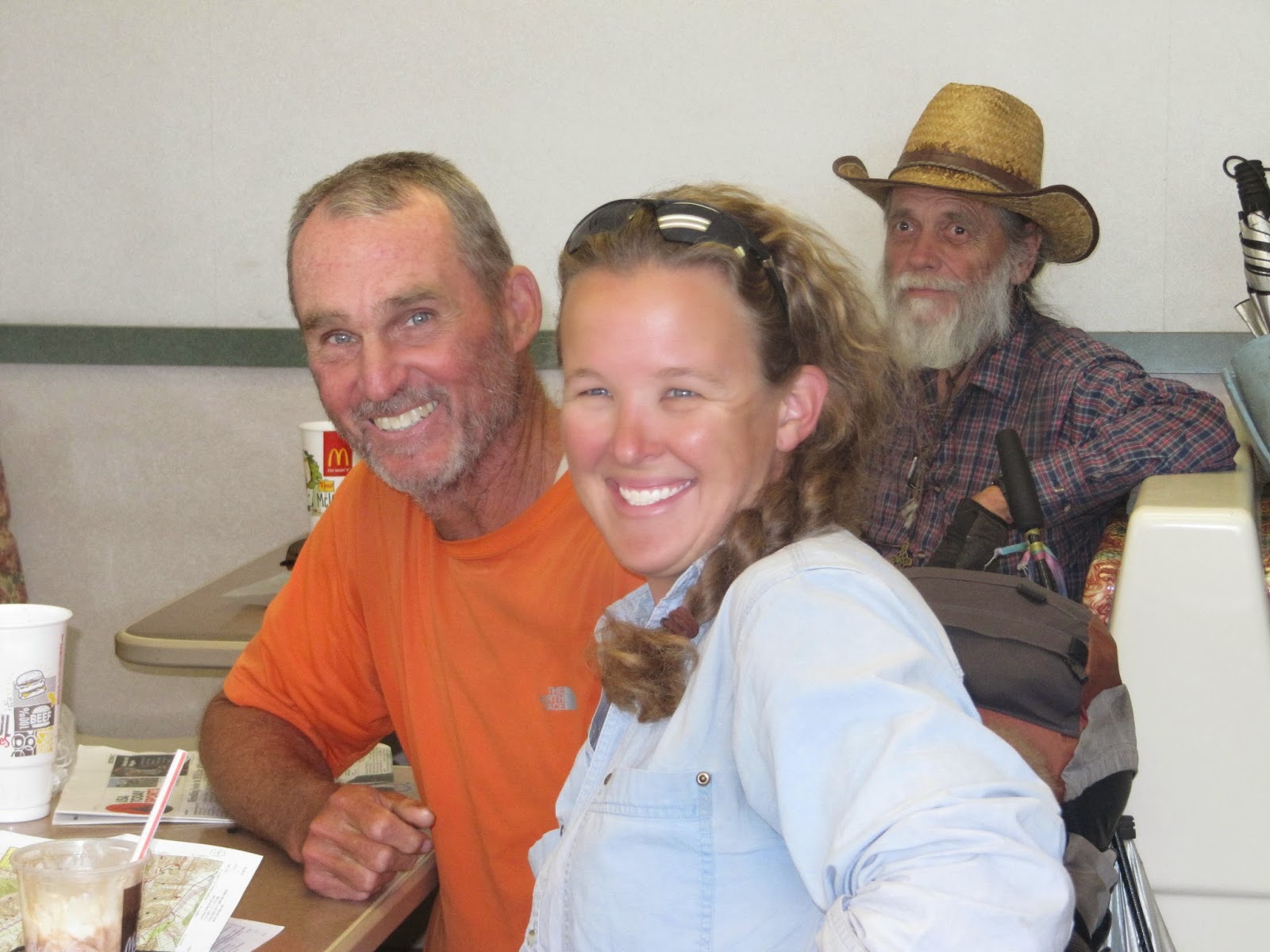 Myself, Cookie and a photo bomb in the background. 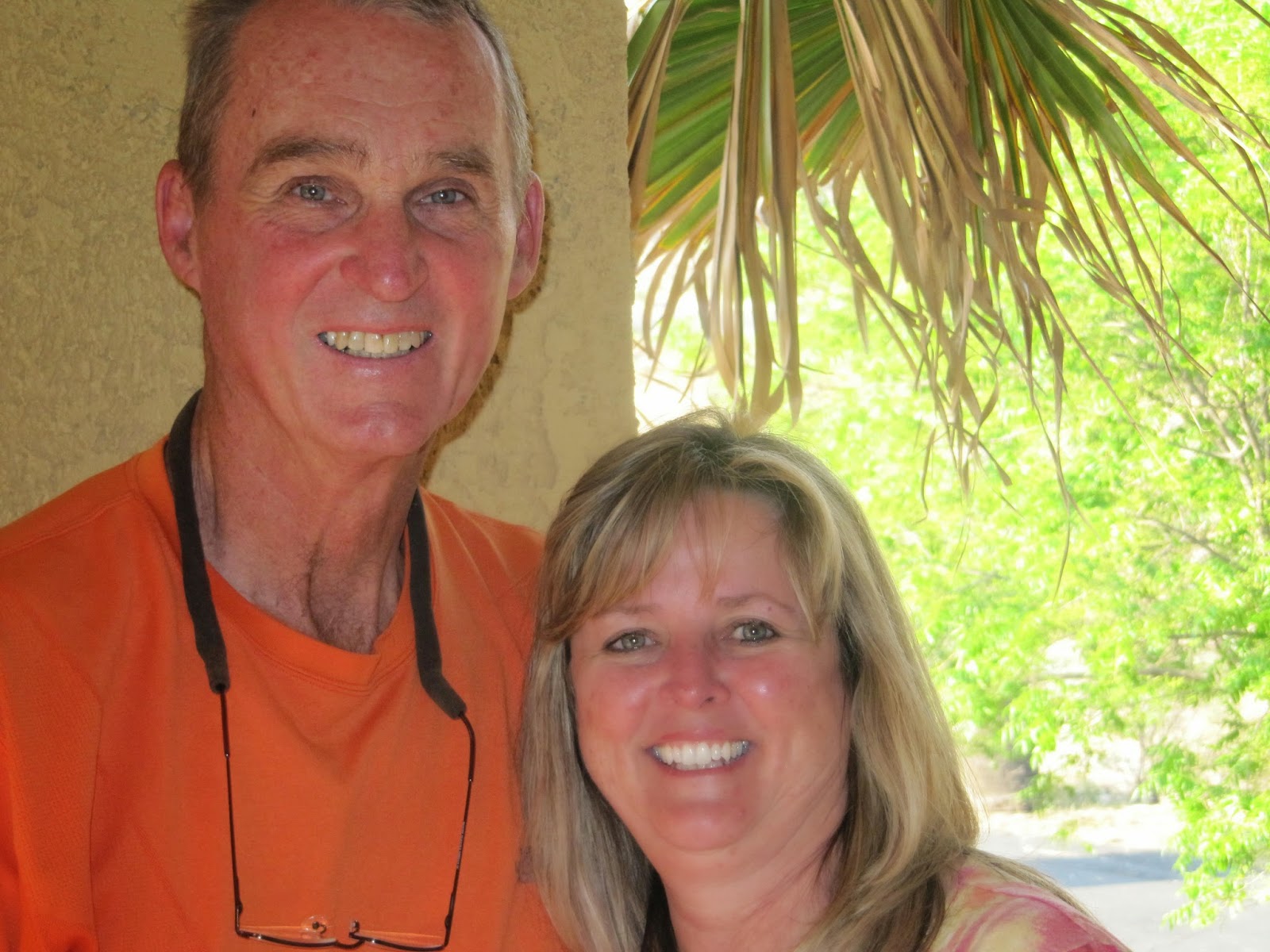 Showered, clean shaven, clothes washed, Jodie, and I and our friends the Cutlers are off to visit Wrightwood.