Between the trail and the hot springs, there was a small beach with a prominent sign that read, “No camping and no fires.”  In the immediate area there were a dozen hikers, most of who had already set up tents or sectioned off a camping site in preparation for spending the night.  As it was late in the afternoon, and there were no other camping places available (the hillsides being too steep), and because I was exhausted, I knew I wasn’t going to leave this place, with all due respect to the no-camping sign.  I scrounged around to find a flat place free of ants, and found one that many others had used before me.  When my bedroll was laid out and all my gear secured, I ate a couple of peanut butter and jam tortilla sandwiches and called it a night.
I left camp at four in the morning and followed the trail with the illumination of my headlamp.  I had to move slowly and cautiously as the trail was narrow and filled with rock and loose gravel.  One slip and I would be down the mountainside, as the sides of the mountain were steep and a fall would land me in the bottom of the canyon, hundreds of feet below.

Just before 5:00 a.m., it began to get light. After two miles, the trail crossed over Deep Creek on an arched bridge and continued downstream following an abandoned aqueduct buried underneath the trail.  After crossing the bridge, I stopped on the far side and watched a beaver slowly make its way up the placid waters of the slow-moving stream.  I would travel many miles today before those sleeping on the beach beside the creek and those camped back at the hot springs would catch up with me.

By 7:00 a.m. I had traveled four more miles and had arrived at the spillway of the Mojave River Forks Reservoir Dam.  The trail crossed the spillway, and then descended gradually to the sandy bottom of Deep Creek.  Eventually, the trail crossed the creek and followed an abandoned paved road, to an intersection with Highway 173.  At the intersection was a water cache, and there I met Atlas, a hiker I first met at Ziggy’s place, and who has hiked the trail before.  He said the last time he was through here, the lady who maintained the water cache had tables and chairs set up for the hikers and was serving banana splits.  How I would love to have gotten in on that bit of trail magic.
Atlas was a fast hiker, strong and sturdy with legs the size of tree trunks.  He moved on and I resumed my two-mile-per-hour pace.  Within the hour, I arrived at a second water cache, and again found Atlas who was resting in a chair that trail angels had provided along with their water cache.  With him was trail hiker Veggie, who I hadn’t seen since the first day at Lake Morena, and now I didn’t recognize him.  After reminding me who he was, the three of us sat awhile in the shade and visited.

The talk was simple, mostly making inquiry about the status of other hikers we had met along the trail.  Veggie indicated that his feet were hurting because of ill-fitting shoes, a common complaint heard often along the trail.  He was hoping to get relief with the purchase of a new pair.

For years, the mandatory hiking shoe was a heavy leather boot, with leather lacing wrapped around metal hooks securing the boot to the foot, which in turn was ensconced in a heavy wool sock.  This was the accepted and normal practice.  It was assumed that if you were carrying a heavy pack, you needed a sturdy boot to support the weight of the pack.  Until I started the PCT, lightweight leather boots were all I wore in the backcountry, and I never had an issue with them.
But somehow, somewhere, this all began to change and hikers started wearing regular tennis shoes, like the Converse All-Star basketball shoe.  Hikers found that they could hike just as well in lightweight footgear, without injury to their feet, and thus heavy leather boots were relegated to the piles of used and discarded camping gear.

I heard it said on the trail that the change from heavy boots to lightweight trail runners could be attributed to long-distance hiker Billy Goat.  As the story goes, he was on the trail wearing a pair of Red Wing boots that eventually needed some repair work.  Off to the factory he sent the boots for warranty repair, and when they weren’t returned in a timely fashion, he simply bought a pair of tennis shoes and continued his journey, and thus was born the lightweight hiking shoe revolution.

I started the trail with a hybrid shoe, a cross between a leather boot and trail hiking shoe.  The brand I chose was Keen and the model was the Voyageur.  I chose Keen because of the wide toe box which allowed ample wiggle room for my toes.  This one feature saved me untold misery from blisters because my toes weren’t scrunched together.  This feature, plus buying the shoes two sizes larger, produced the perfect shoe for my hiking experience.  Unfortunately, the shoes didn’t hold up.  They had a tendency to delaminate.  The soles would separate from the uppers.

Before the hike began, I purchased five pairs of these shoes in size 14, to ensure I would have sufficient footwear to last through the hike.  I returned four of the five pairs to REI because of laminating problems.  I finished the last eight hundred miles of the trail wearing Brooks Cascadia shoes, a shoe popular among hikers on the trail. 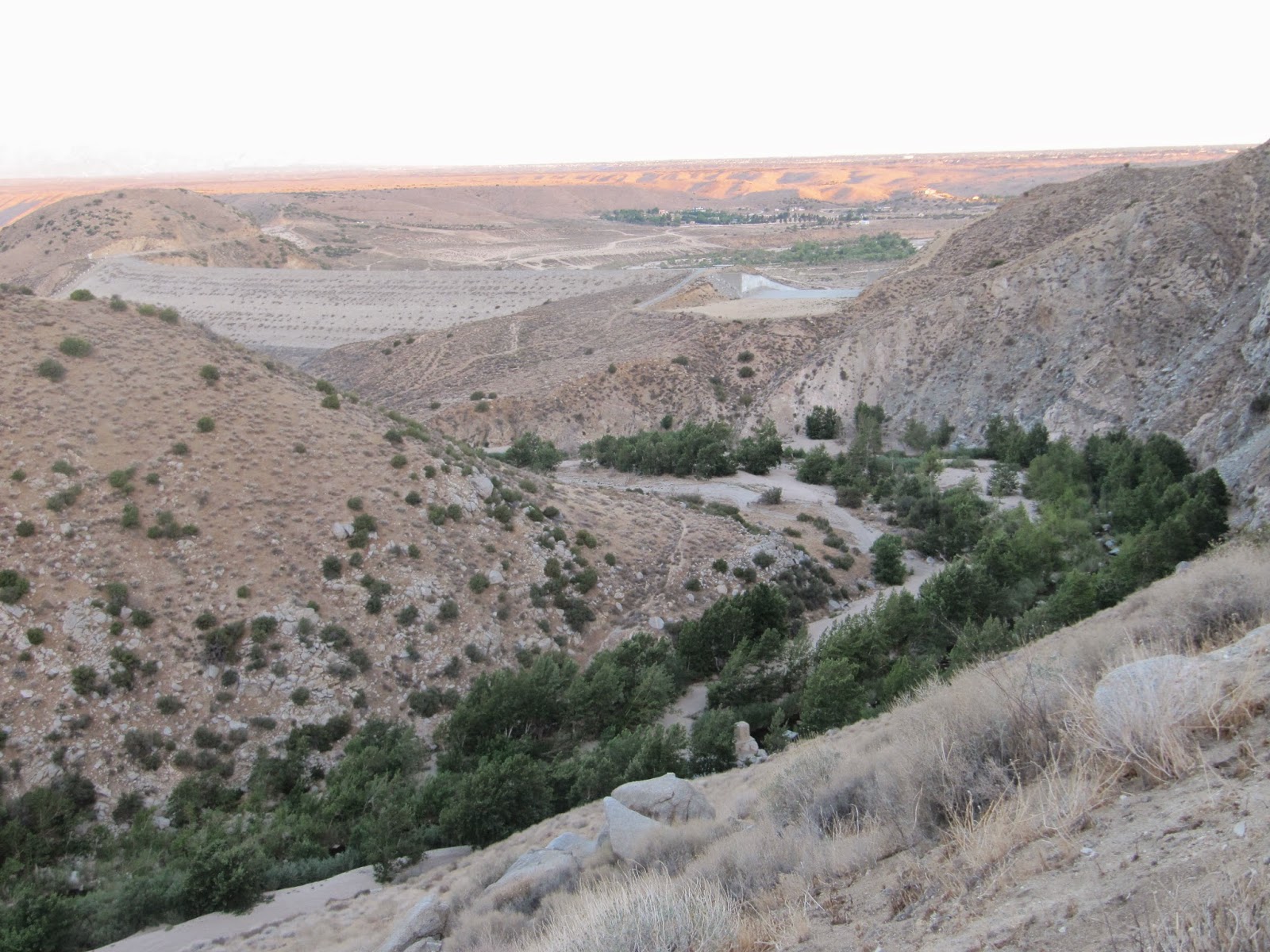 Lush vegetation along the banks of Deep Creek as it approaches the Mojave River Dam. 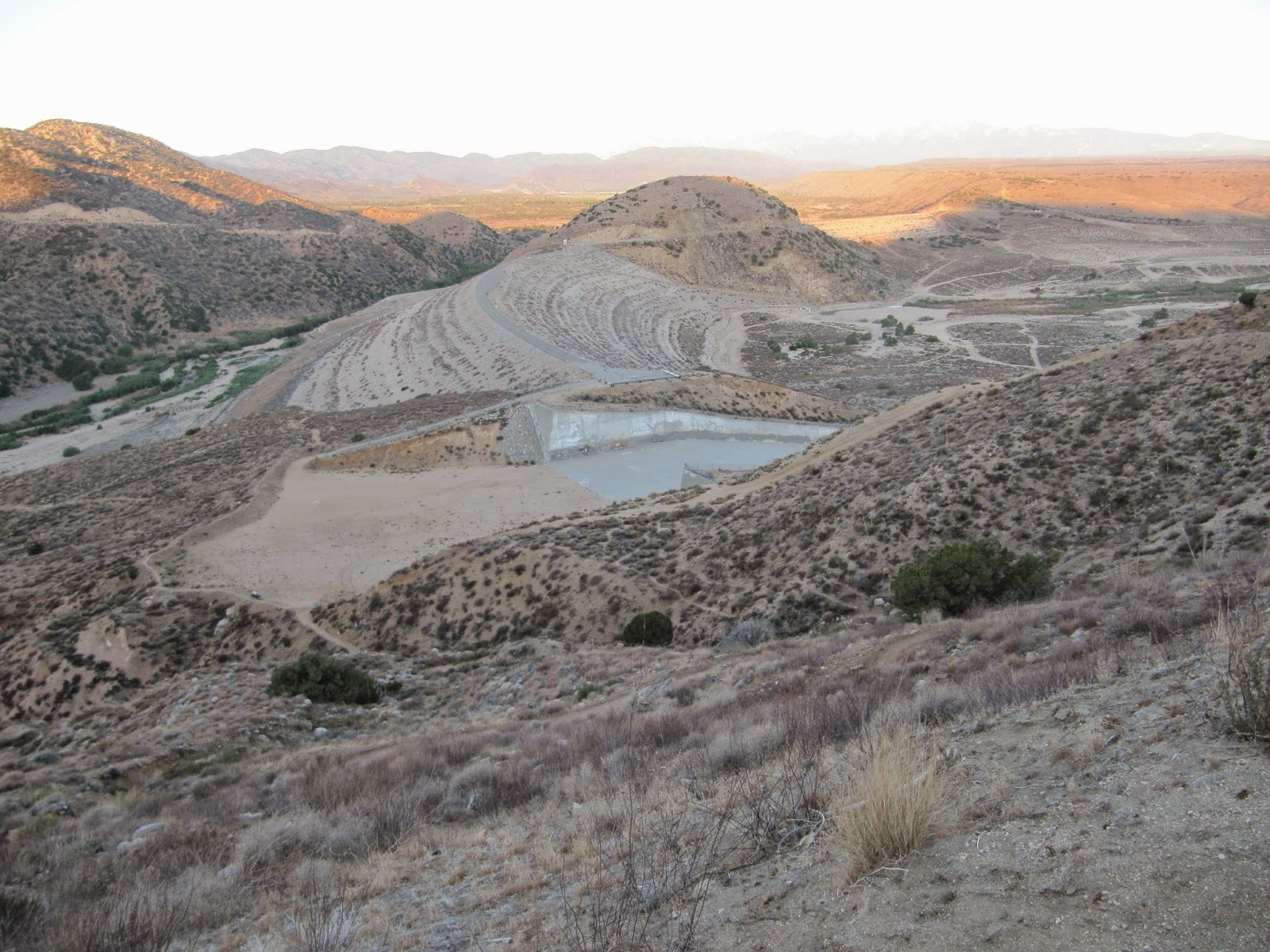 The trail crosses over the top of the dam and then continues to the green vegetation along the river.