Passing under the I-10 freeway, I encountered an array of dirt roads and dirt bike trails, all associated with the little town of West Palm Springs that one guidebook described as a slowly dying suburb.  Another guidebook - Yogi’s guidebook to trail towns, indicated that on the outskirts of town adjacent to the trail, was the trail angel home of Ziggy and the Bear, where one could resupply with water. (McDonnell)

I headed in that direction, and as I got closer to the home, I spotted little signs along the trail announcing the amenities to be found at Ziggy’s place.  I followed the signs and arrived at a home that sat behind, or maybe in front of, the town’s massive water tank.  I peeked over the back fence and saw a multitude of hikers milling around, engaged in various activities
.
The front gate had a sign attached to it with instructions on how to open and close the gate, with special emphasis on closing the gate so the wind wouldn’t tear it off its hinges.  After passing through and making sure the gate was closed, I moved around to the backyard and encountered something I never would have expected to experience.

Almost in unison, the other hikers welcomed me to Ziggy’s place.  I felt as though I were being hailed as a conquering hero.  They invited me to drop my pack and sit in one of the special chairs reserved for newly arrived hikers.  As I followed their instructions and eased into the soft, comfortable chair, the group of hikers let out a collective “Aaaaaah

A footbath of warm water and Epsom Salts was placed before me and I was instructed to take my shoes and socks off and soak my feet in the warm water.  Next, an attendant approached who introduced himself as Ranch Hand and handed me two towels, a small one to dry my feet, and a larger one to use in the shower.  He pointed to a small building and said I should put my name on the signup sheet, and when it was my turn, enter the building and enjoy a warm, refreshing shower.  He then proceeded to explain the protocols for staying at the trail angel’s home.

I was welcome to stay a day or two at the home, resting and preparing for the next section of trail that included a long three-thousand-foot climb from the desert floor to the pine forest of the San Bernardino Mountains.


In plastic totes on the table were cold drinks and fruit, and I was encouraged to partake as needed. Likewise, other totes were designated as hiker boxes, which were containers full of cast-off supplies that other hikers didn’t want.

These contained food items, medical supplies, even surplus clothing, and fuel canisters. He said there were several laptop computers for my use which would enable me to upload my journal notes and photos and/or send e-mail messages to friends and families.  Likewise, there were outlets for recharging batteries.  There was a laundry tub on the side of the house where I could rinse out my hiking clothes and hang them on the clothesline.

Around dinnertime, orders would be taken for a run to fast-food establishments in nearby communities, and a light meal of salad and drink would be furnished by the home’s hosts, followed by ice cream and toppings.
The backyard of Ziggy’s home had no grass, but was covered with cast-off carpets nailed to the hard-packed dirt, which in turn were covered with portable awnings that provided shade from the desert sun and occasional rain.  Ziggy’s place was also a drop-off point for hiker resupply boxes.

After showering and shaving, I changed into clean clothes, then found an open spot on the carpet to unload my pack and sort through my supplies.  I rummaged through the hiker boxes and found a few food items that appealed to me and placed them in my pack.  Around me other hikers were engaged in the same activities, while still others were curled up in their sleeping bags trying to catch a few Zs.  The two laptop computers were in use and a few hikers were just relaxing in the large, overstuffed chairs listening to music on their iPods.
There were about twenty hikers gathered in the backyard and I searched the crowd for familiar faces.  I recognized Matt, Rachel, and Robin from our encounter up on Fuller Ridge.  During the rest of the day, other hikers arrived and the hot topic of conversation was the severity of the storm up on Mount Jacinto.

Towards evening, a long, lanky hiker named Joe (trail name Lightning Rod) showed up in the backyard.  He said he had hiked from Fobes Pass to Ziggy’s place without stopping, a distance of approximately forty-four miles, because it was too cold up on top of the mountain to stop and camp, and by the time he hit the switchbacks on the downhill side of the mountain, he just kept going.

Only someone like Joe who, at twenty-one years of age and who still has nine lives, could crank out forty-four miles at one time.  I would meet Joe several more times on the trail and always enjoyed talking with him, even though it was always for a brief moment as he flashed by me.

Yogi’s guidebook only mentioned water and rest at Ziggy’s place, and here I was being treated to five-star services.  I was totally unprepared for what I was experiencing.  People just don’t go out of their way to provide strangers with the amenities that were being offered by Ziggy and the Bear, and yet this elderly couple has been providing this service for many years.  In fact, they were so into providing trail magic for the hiking community that they specifically purchased a home in West Palm Springs right next to the trail, and although hikers are expected to contribute a twenty-dollar donation for the cause, undoubtedly Pat and Paul Miller (Ziggy and the Bear’s real names) cover much of the expense for these services out of their own pocket.

Gratitude for their kindness and generosity doesn’t even begin to convey the feelings one has for these two outstanding and unselfish individuals.  They have set the bar high as examples of individuals who give charity, service, and brotherly love for no reason other than they can, expecting nothing in return.  They exemplify the story of the Good Samaritan, and as hikers, we love them for the tender mercies they showered upon all who came limping to their doorsteps, and there were many who came with pain.  They turned no one away, but offered solace, comfort, and the Balm of Gilead. Thank you, thank you, thank you, Pat and Paul.

I slept apart from the main body of hikers, as I knew I would be leaving early and didn’t want the rustling of plastic bags to disturb the sleep of others as I loaded my pack.

The next morning, when it was time to leave, and as I moved softly around the sleeping bodies, I noticed that the kitchen help had set the table with the makings of a fabulous continental breakfast.  I stopped long enough to partake of cereal, fruit, juice, and bagels, then moved quietly to the front gate, unlocked it, and slipped out into the cool morning air. 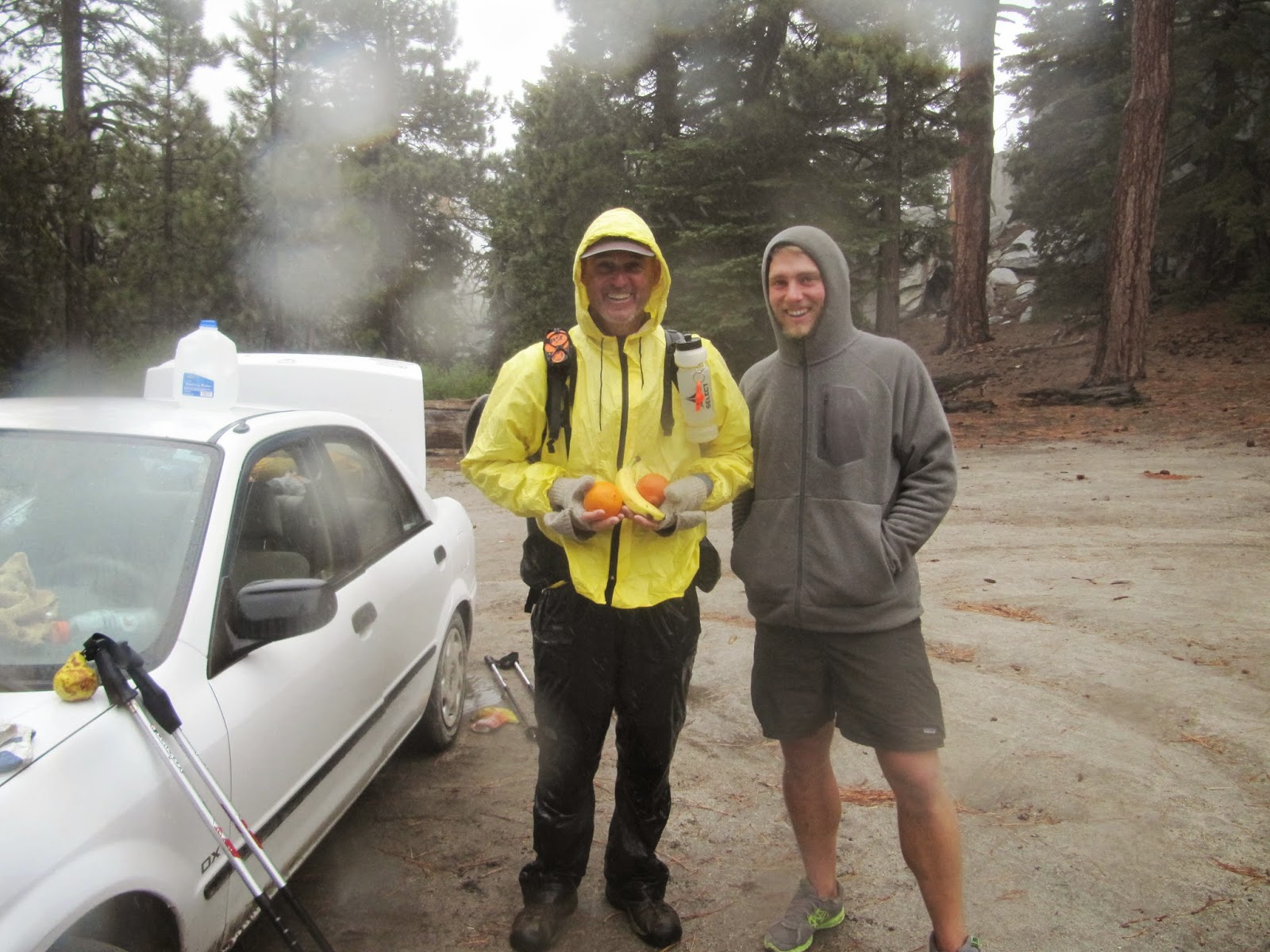 The young man I met on the trail who offered me all the food he had with him. 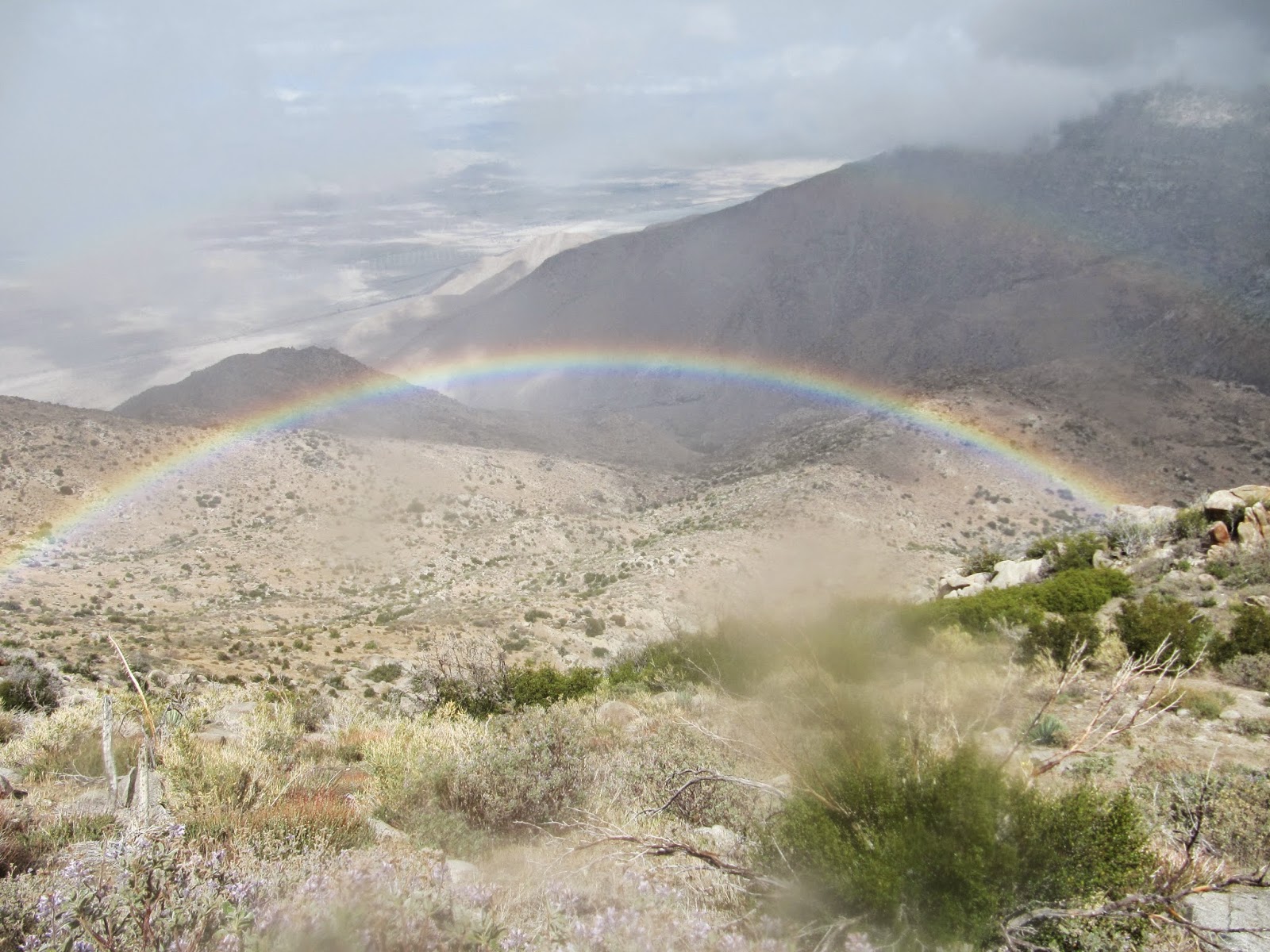 Coming down the north side of  San Jacinto Mt. and Fuller Ridge. The desert floor is way in the distance. 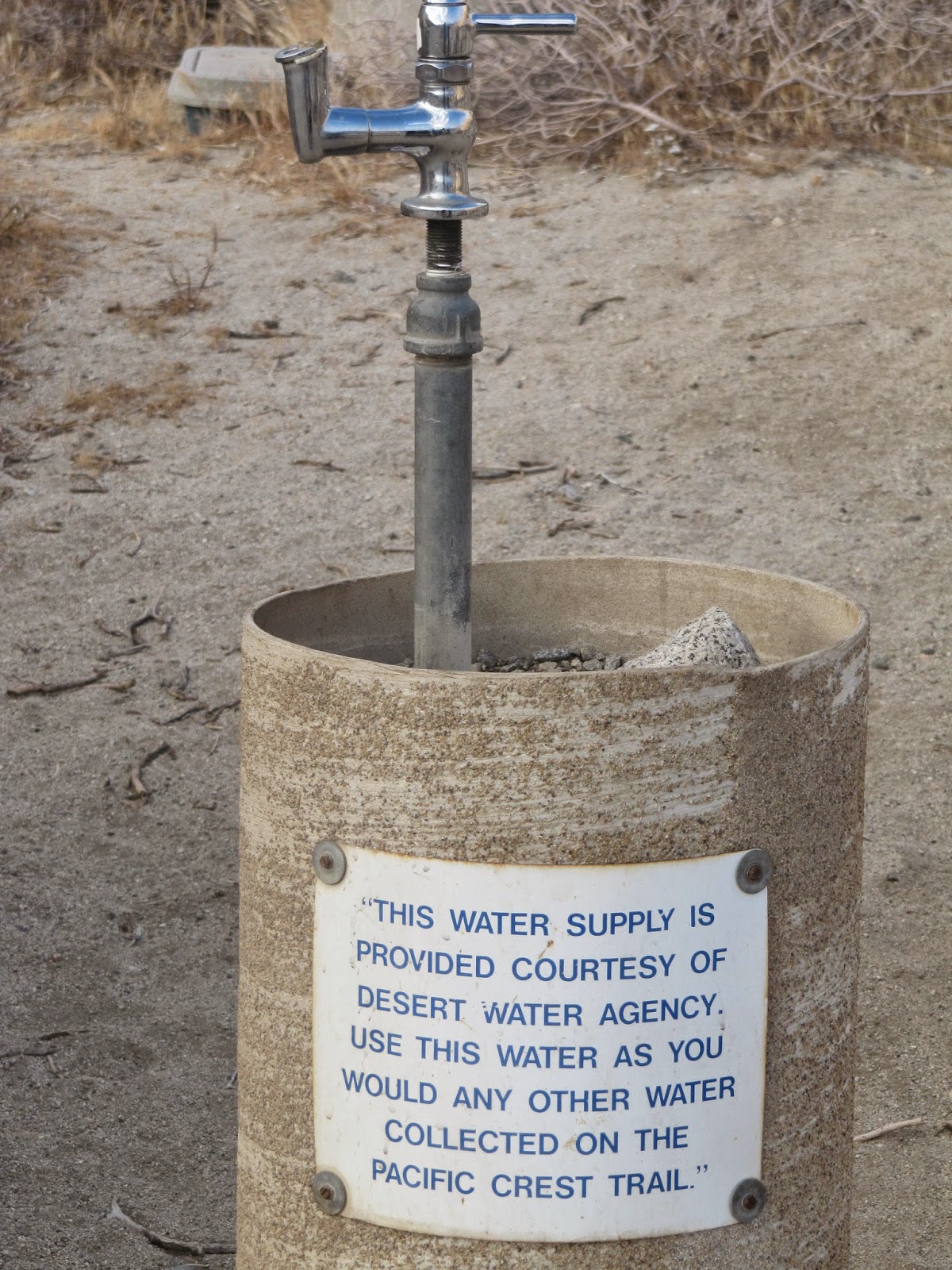 The famous water fountain in Snow Canyon. It taps into a 12" water line bring water to the town of Palm Spring. 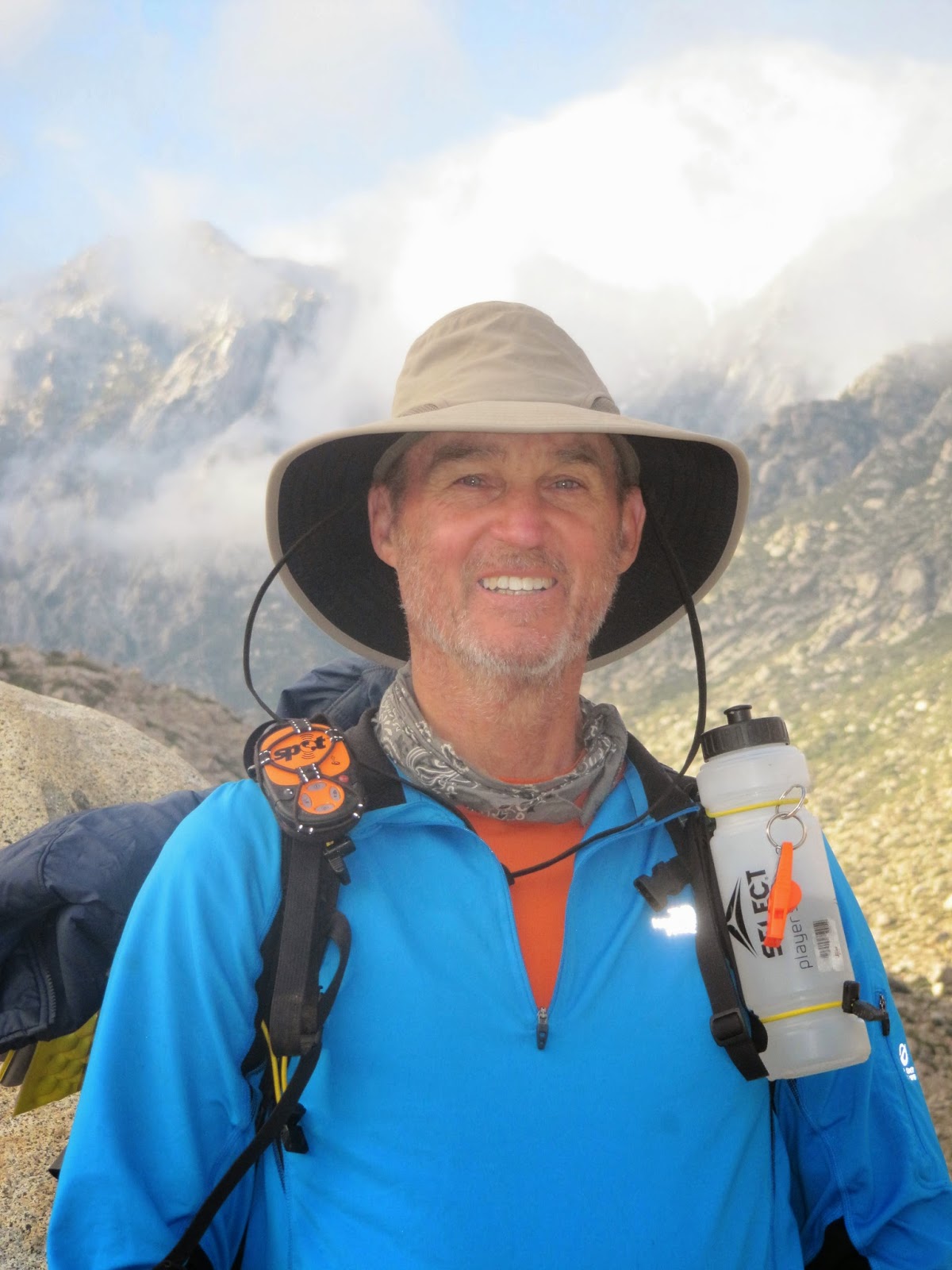 Very happy to be off the mountain. 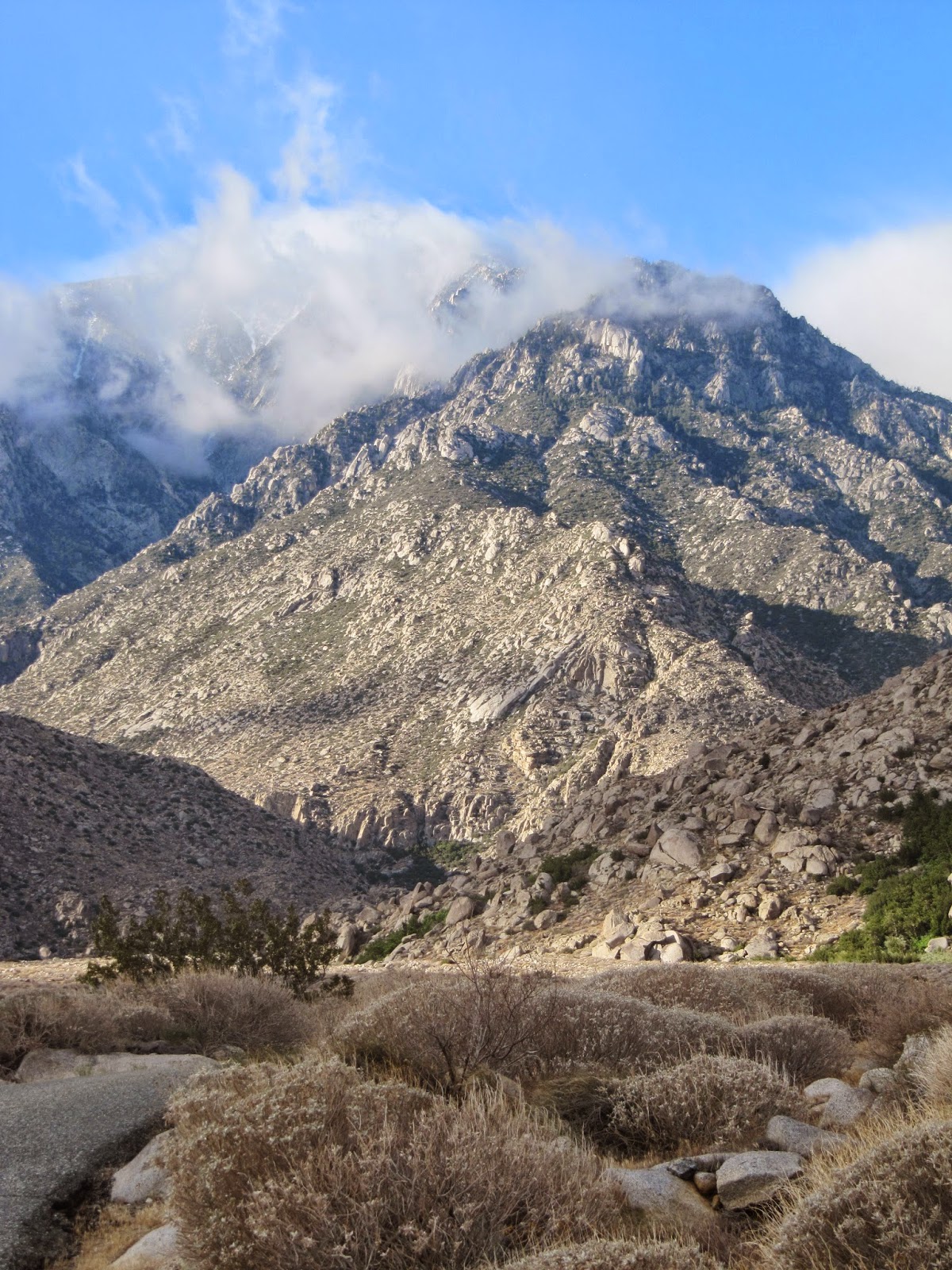 San Jacinto is one big mountain. The three day storm still rages on the summit. 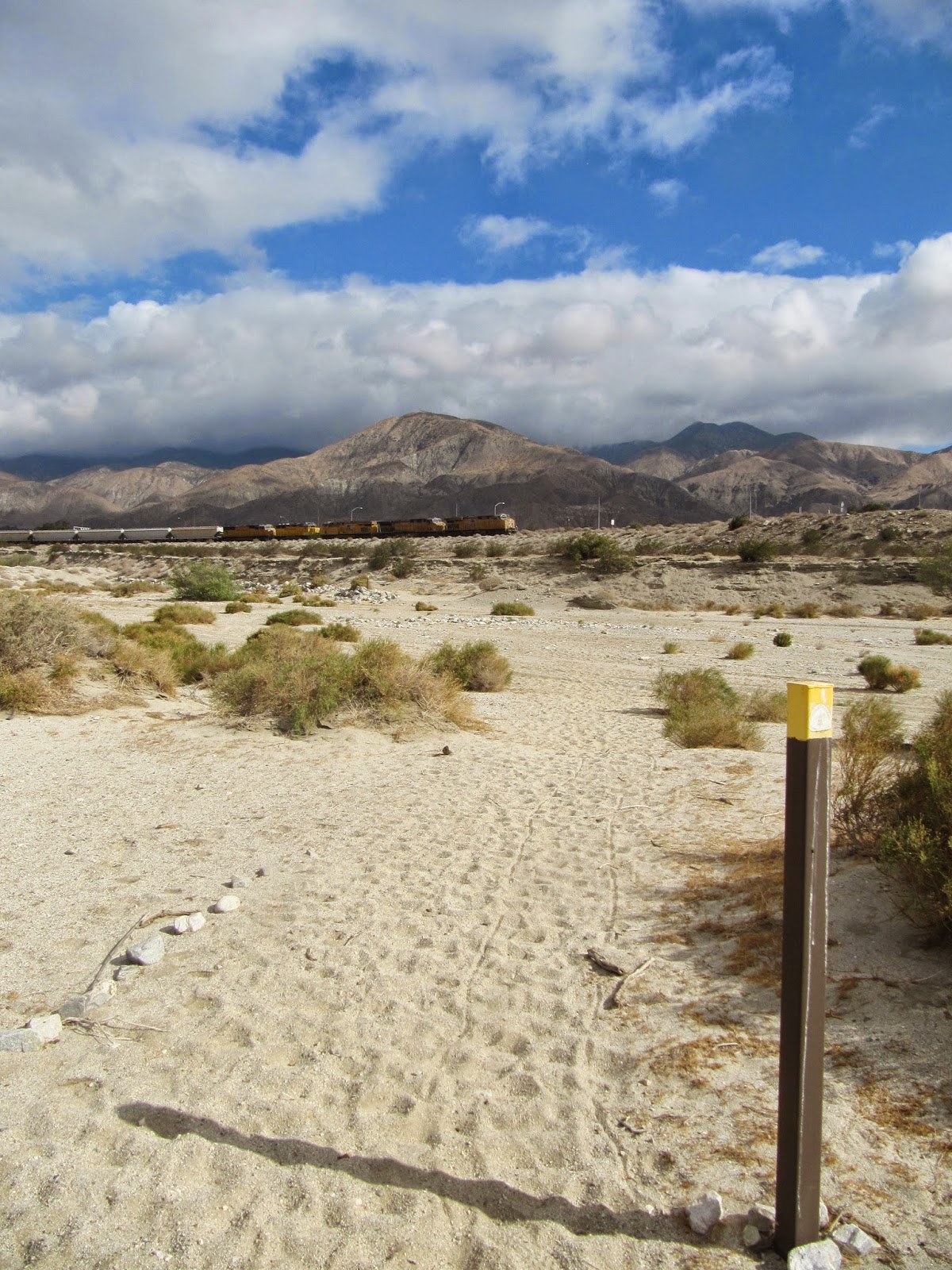 Now the trail heads out across the desert floor to I-10 and the mountains beyond. 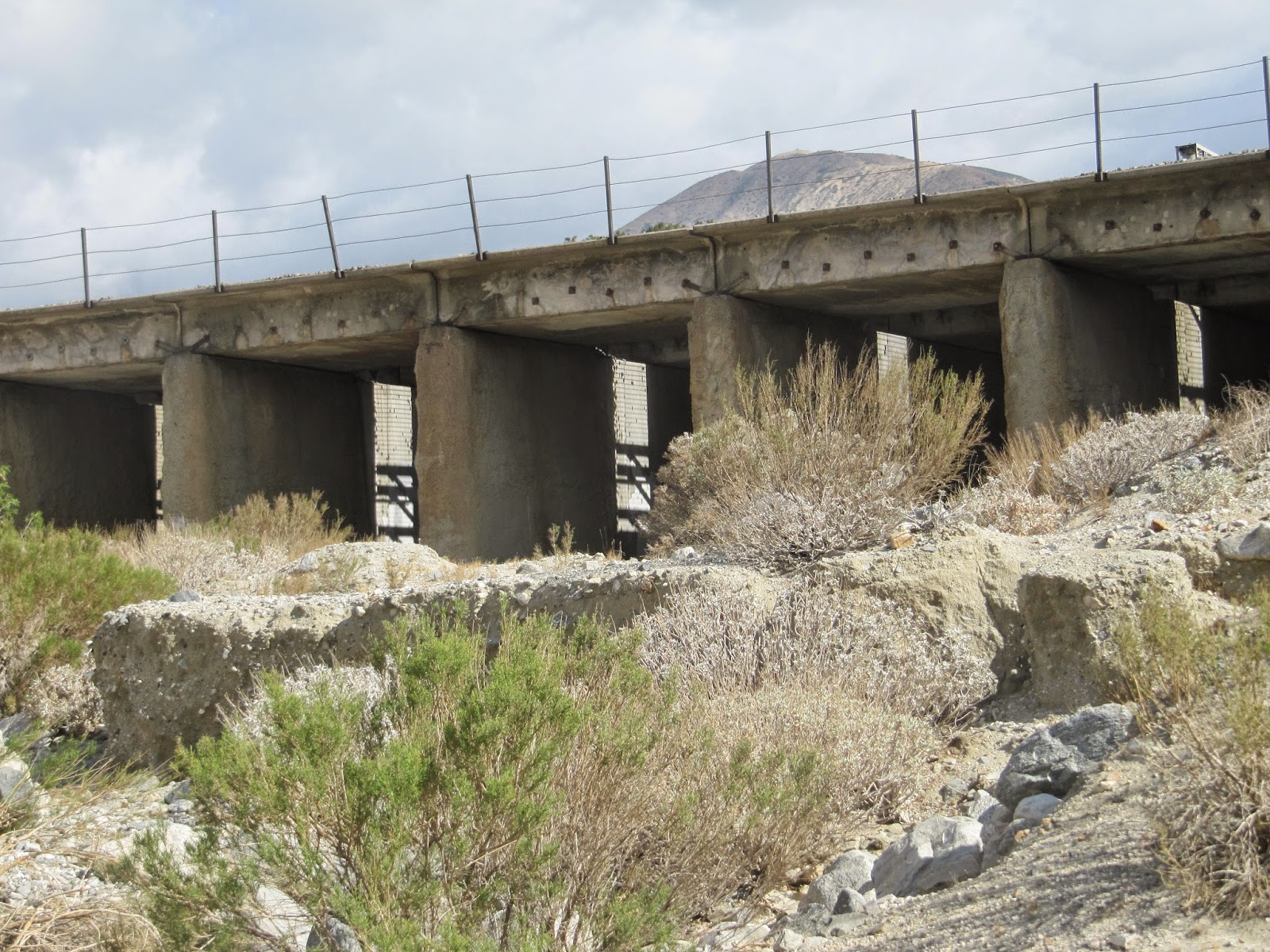 The trail trestles along side I-10. The trail goes underneath, and enters the little town of West Palm Springs. 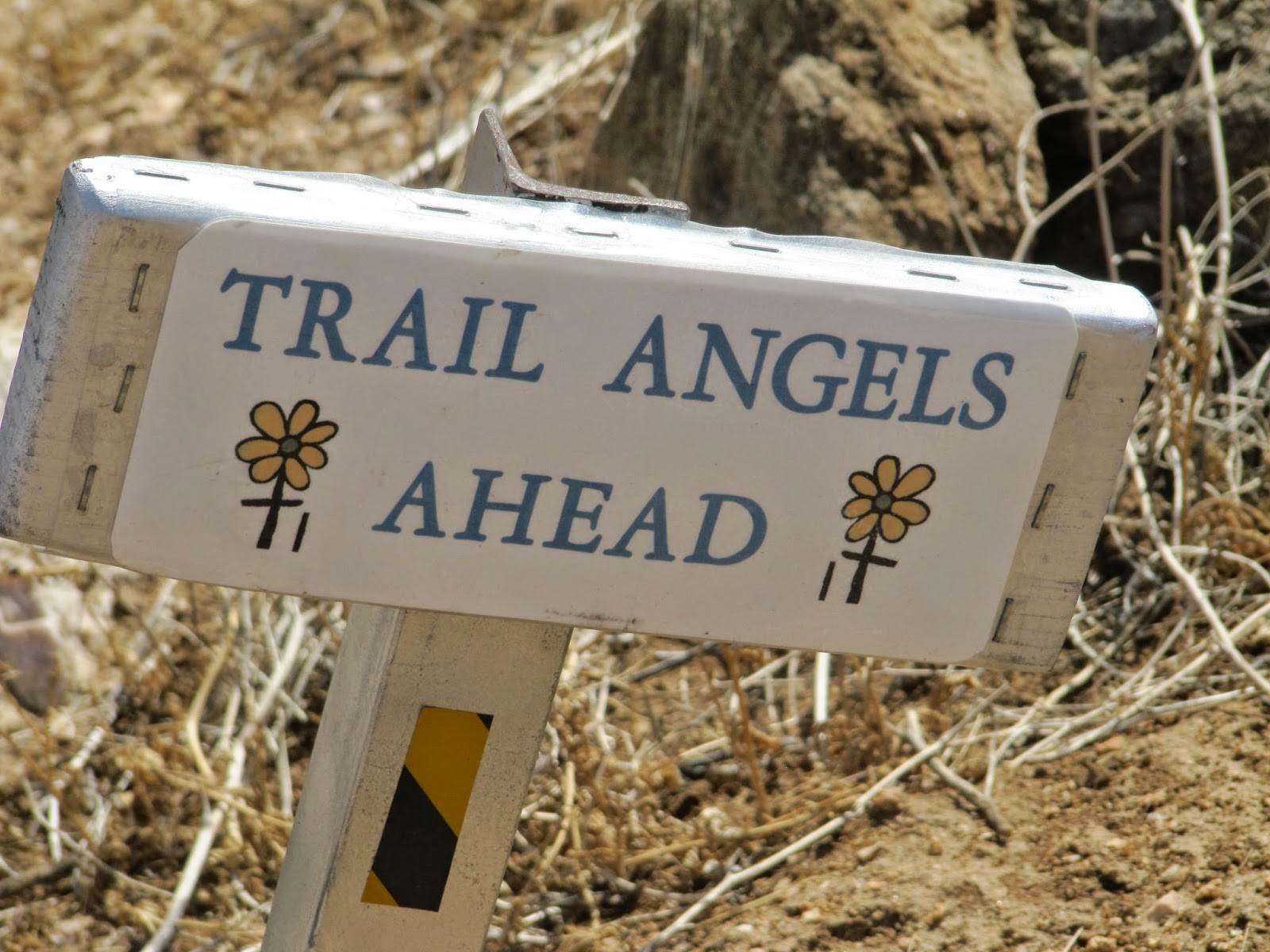 The first indication the trail angels Ziggy and the Bear are just ahead. 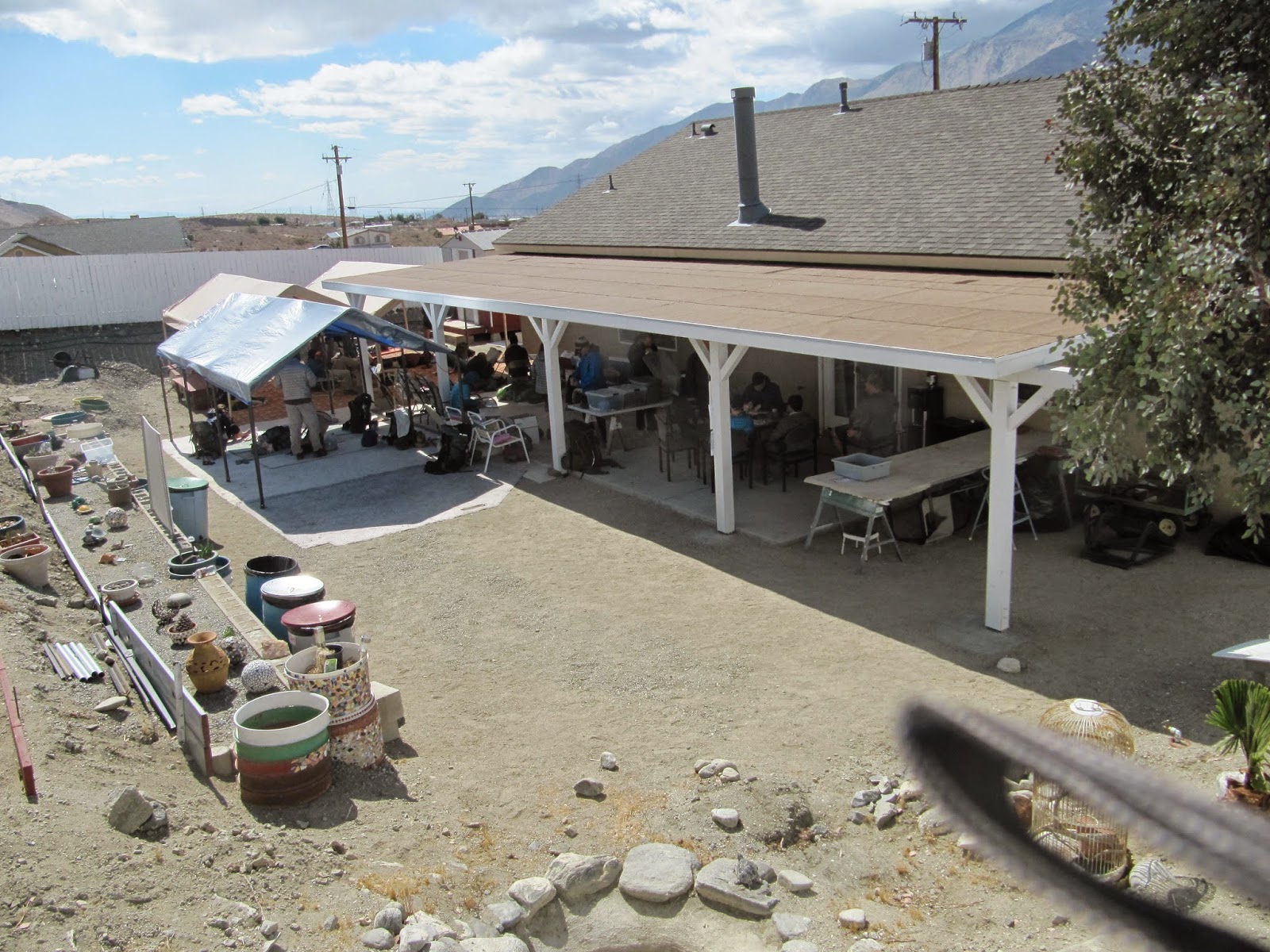 Looking over the back fence, this is the sight that greeted me. 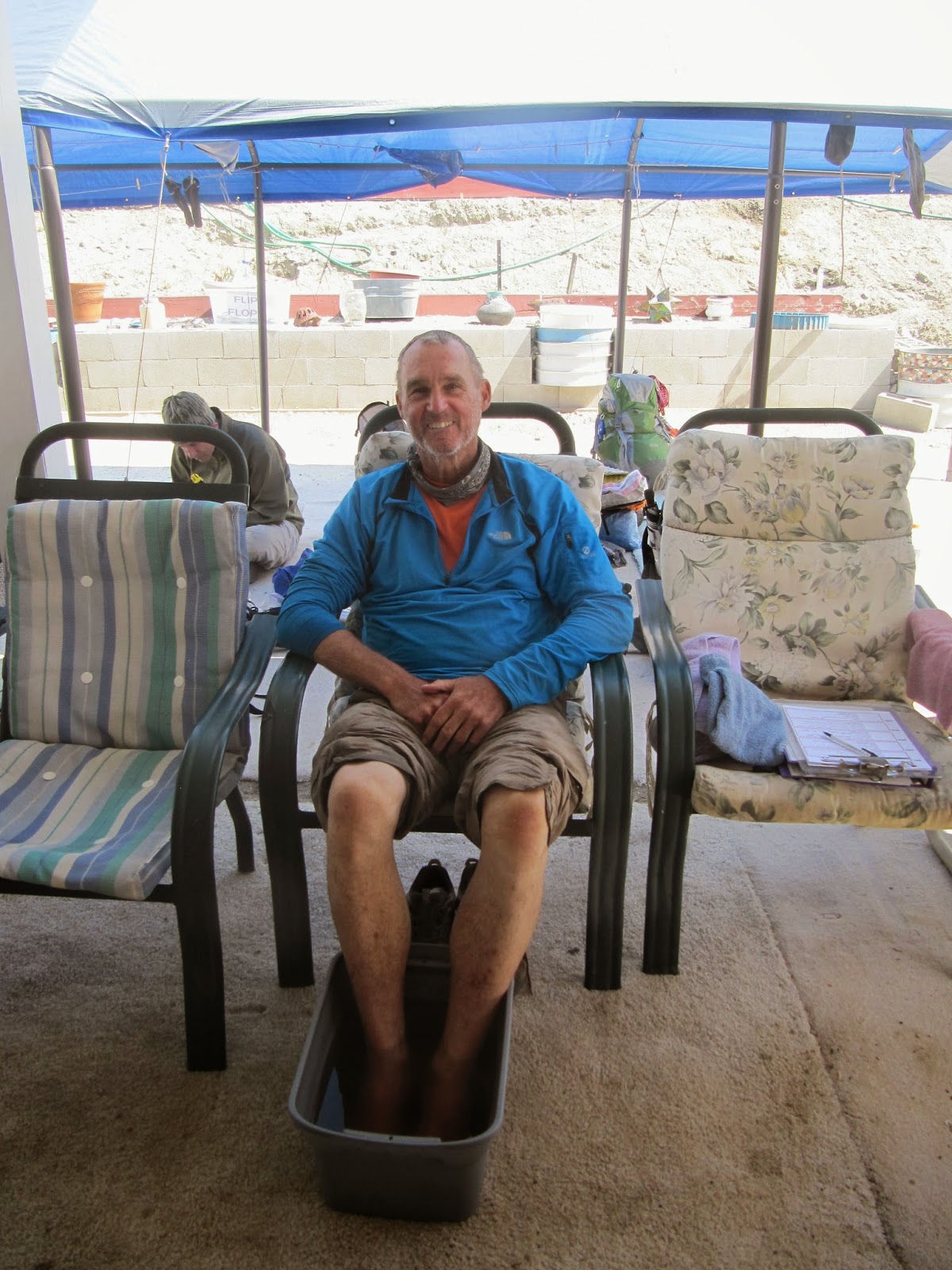 Upon entering the compound, I was immediately treated to a hot foot bath with Epson Salt. 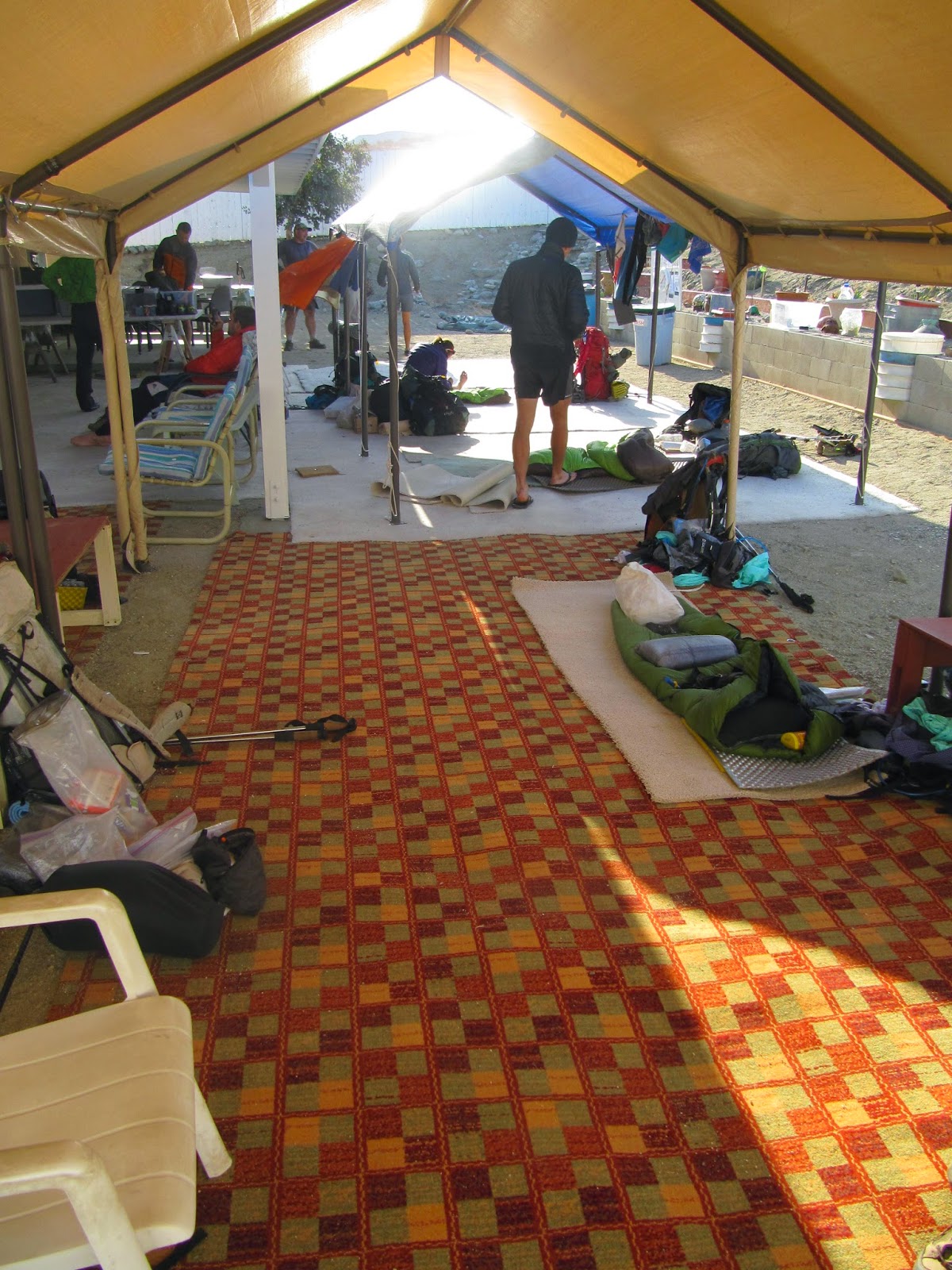 With no grass in the back yard, the dirt is covered with cast off carpet nailed to the hard-packed earth. 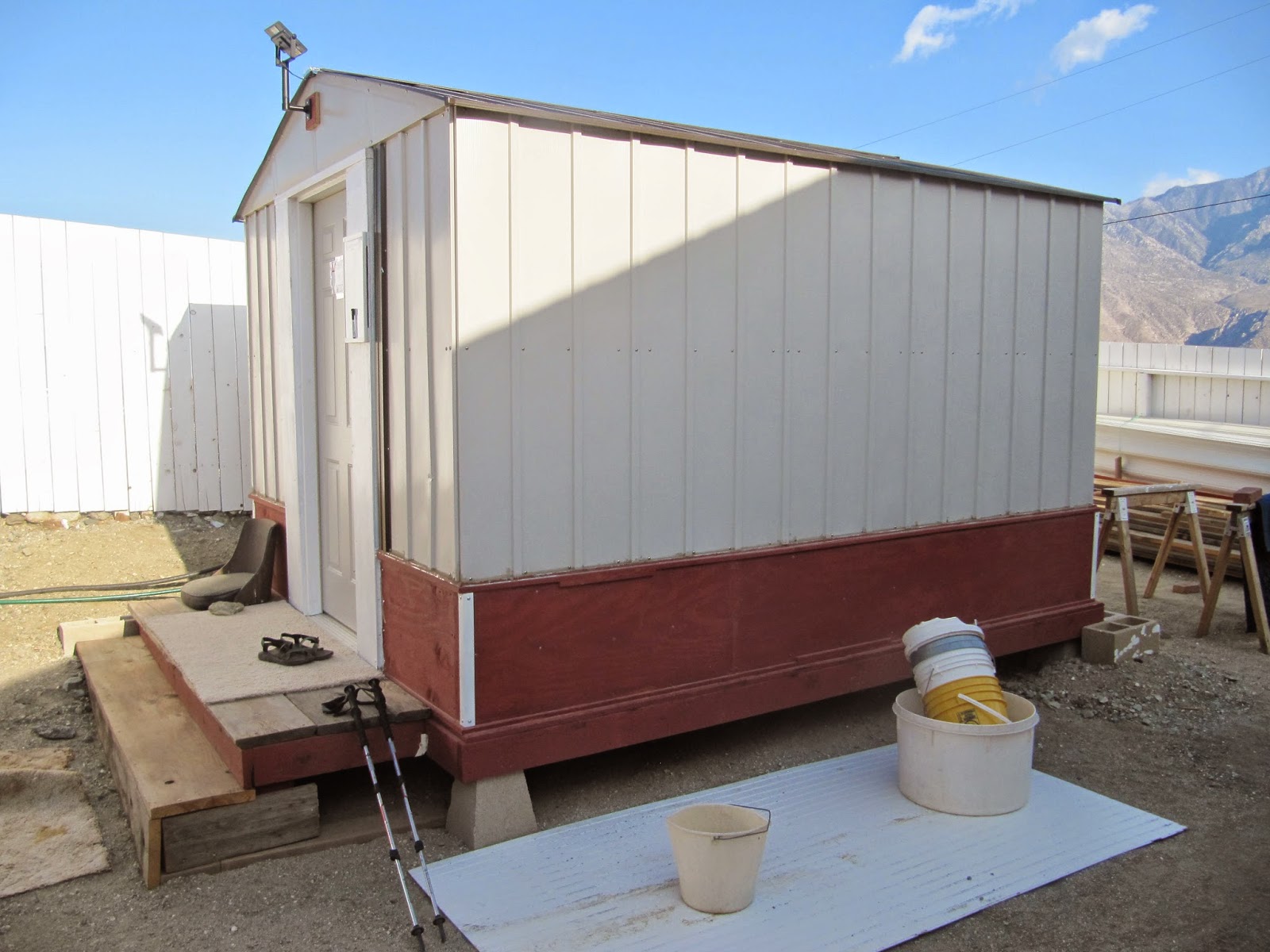 The shower facility. First time for a show since leaving Warner Hot Springs. 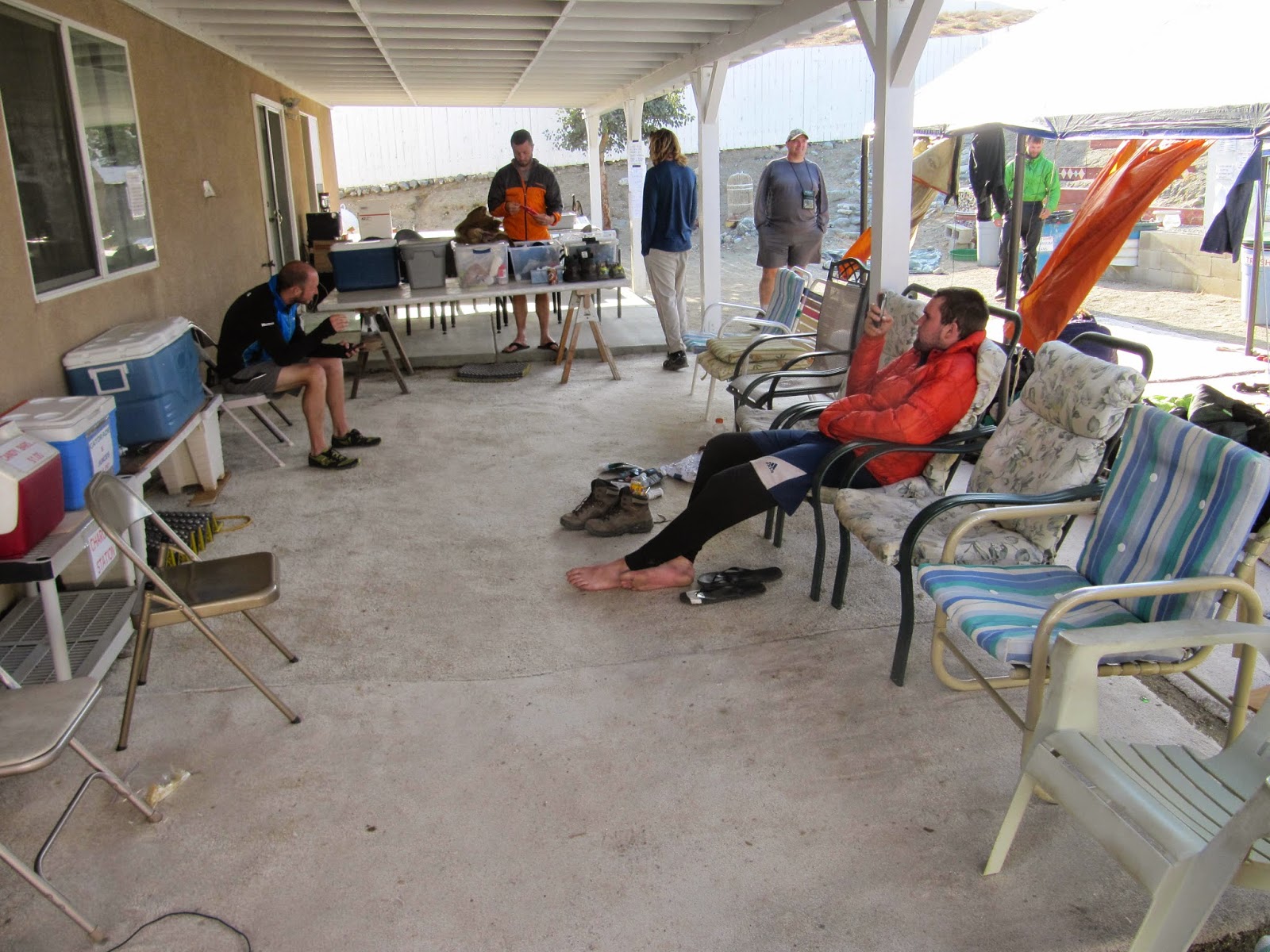 A wonderful place to relax and recuperate. 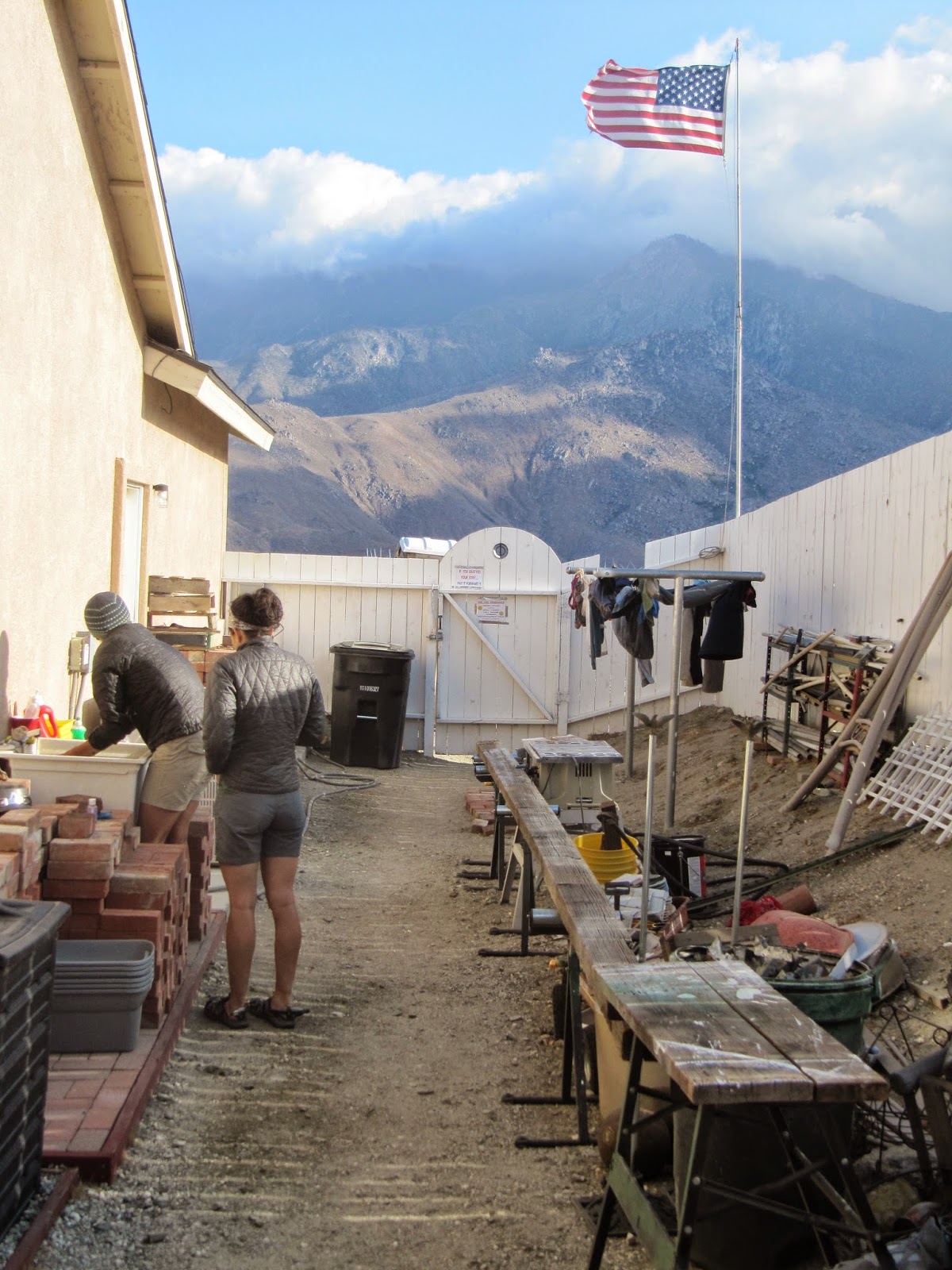 There is no washer or dryer, but hikers can rinse their clothes out in the sink and hang them on the clothes line. 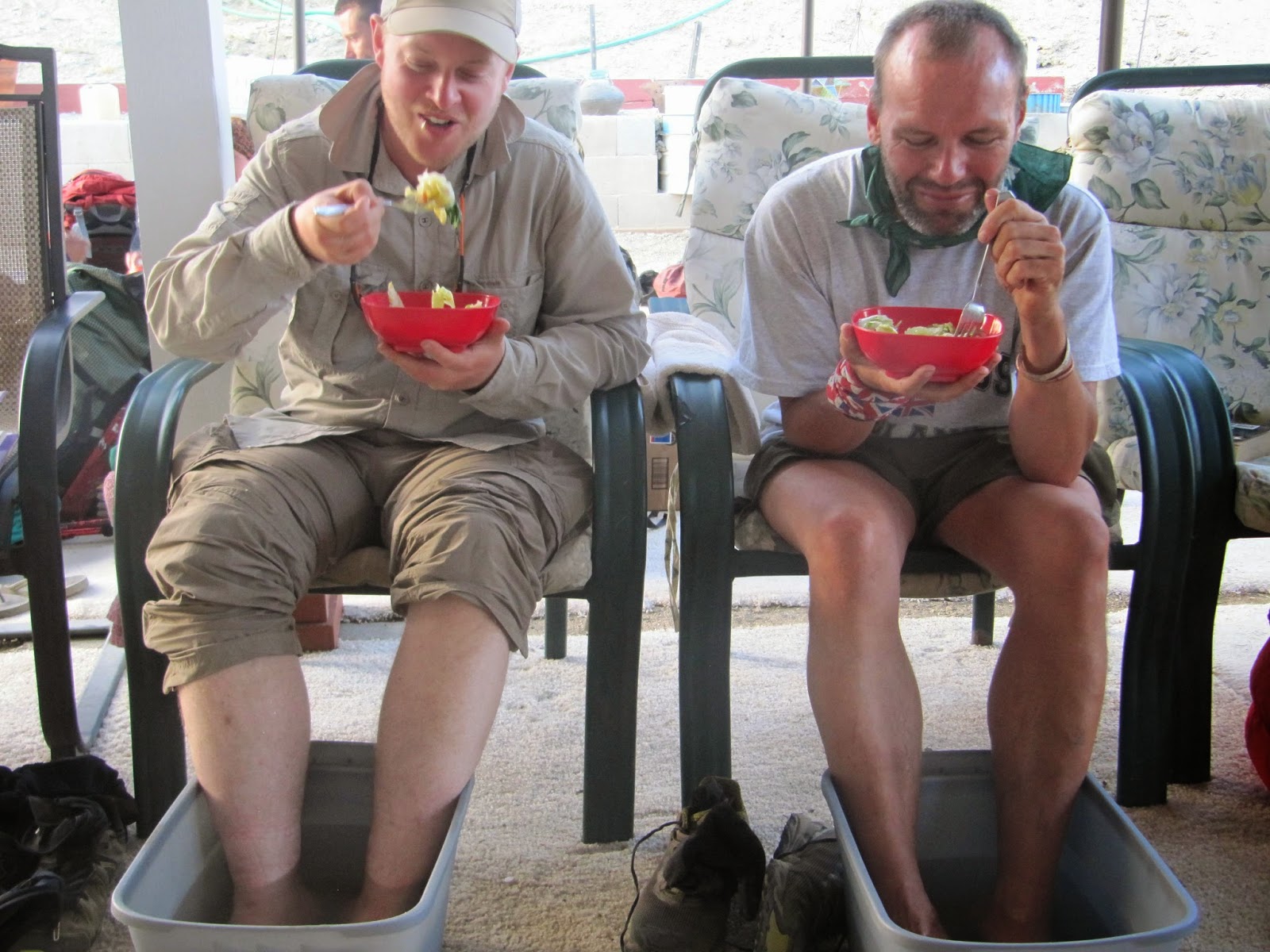 Two beat up hikers enjoying their foot bath and a bowl fruit, courtesy of Ziggy and the Bear.
Note: As of 2014, Ziggy and the Bear let it be know that they were going to have to shut down, as their expenses were too great, and hikers were not giving back their fare share. Suggested donation: $20.00. 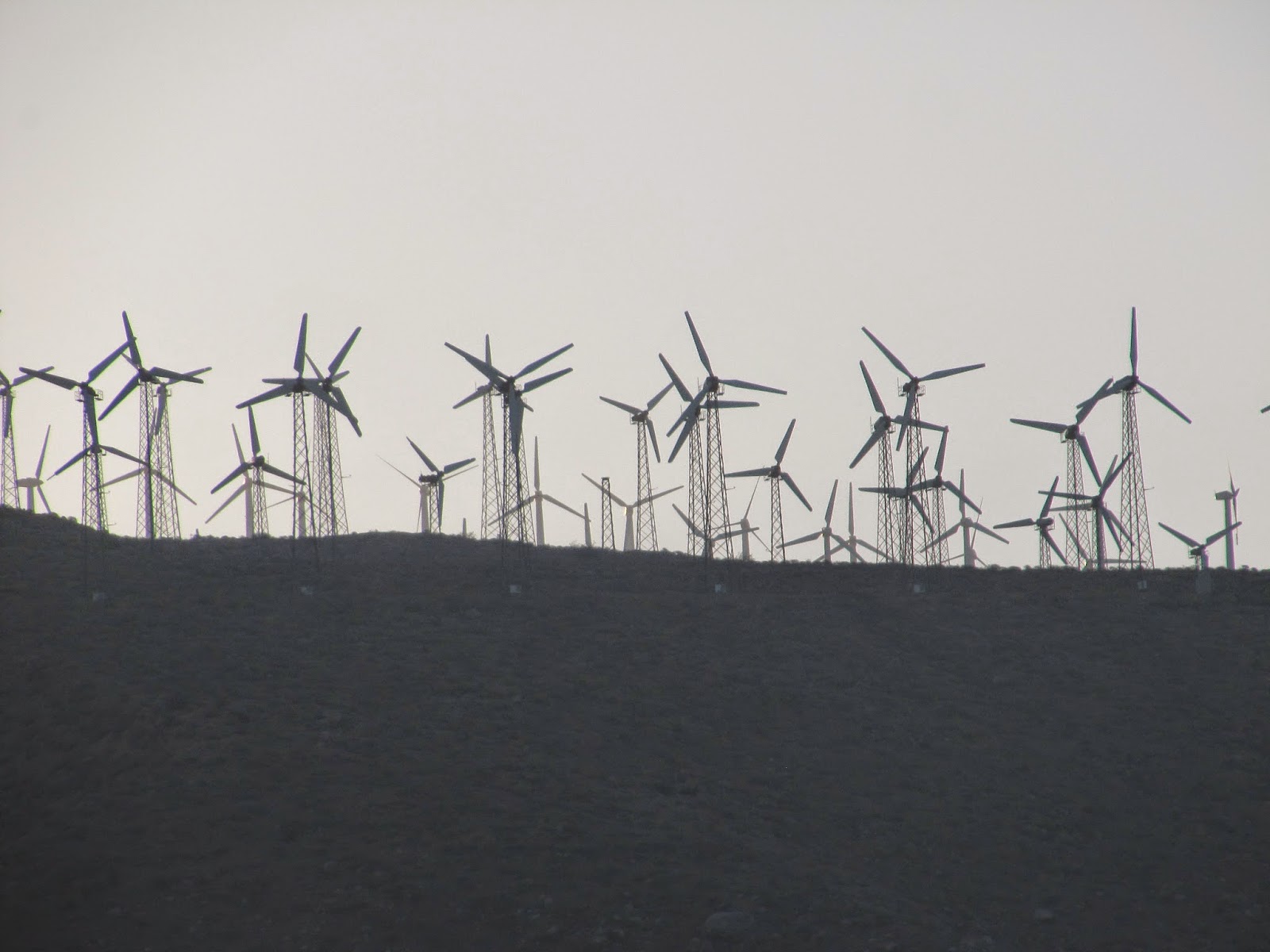 Upon leaving Ziggy's place, the hiker immediately ascends to the Mesa Wind Farm.