The Skywest plane from Salt Lake City, Utah, to San Diego, California, touched down on the tarmac at exactly 11:45 a.m., April 23, 2013.  I deplaned and entered the terminal where I followed the signs to the luggage carousel located on the lower level of the airport.  The carousel was moving when I arrived and luggage from the Skywest flight was being disgorged onto the moving conveyor, where eager passengers were grabbing the baggage they hoped belonged to them.

I waited off to one side of the throng of milling passengers, until I was sure my backpack was on the carousel, then gently elbowed my way to the front of the waiting travelers and snatched my pack as it came within grabbing distance.  To keep any loose straps, plastic buckles or pack fabric from being snagged in moving mechanical parts and damaged as the pack was being shuttled along various luggage conveyors, I placed the Ultralight backpack in a large plastic bag in Salt Lake City.  The ticket agent then attached the destination labels to the bag.  It was neat and slick and the pack arrived in San Diego without damage.

Disposing of the plastic bag in a garbage can adjacent to the exit door, I shouldered the backpack and walked outside, through the swinging doors to the sidewalk and street, where I hoped I would find the right bus that would shuttle me to downtown San Diego.

There are trail angels in San Diego, namely Scout and Frodo, who hiked the Pacific Crest Trail in 2007, who will meet a hiker at the airport and drive them to their home, where one can rest, recuperate, and if needed, be driven to local stores to purchase any last item that may have been forgotten.  These trail angels will feed you, let you overnight in their home, and the next day drive you fifty miles to the Pacific Crest Trailhead at Campo, California, all at no cost to the trail hiker.  As trail angels, Scout and Frodo are the first Good Samaritans and humanitarians PCT hikers will encounter as they begin their long trek northward towards Canada.

Although many PCT hikers use Scout and Frodo to get to Campo, I chose not to.  I wanted to experience the full flavor of travel as the locals experience it.  I wanted to mingle with the populace, observe them up close and from a distance, and to see and feel life as they lived it on a daily basis.
Campo lies fifty miles to the east of San Diego, and it took three transfers to arrive there. I first had to connect with bus number 992 that took me from the San Diego Airport to downtown San Diego.
From there I transferred to the Orange Line Trolley for a forty-five-minute ride to the El Cajon Transit Center.

I didn't know what to expect in terms of a trolley, as the only encounter I've ever had with one was the streetcar that runs up and down the hills in San Francisco, and on which tourists can hang tight to the grab rails as the noisy car clangs its way up the steep inclines.

To my delight, the San Diego trolleys were modern commuter trains.  San Diego has three trolley lines color-coded blue, green, and orange.  The Blue Line goes south to the Mexican border; the Green Line goes northeast as far as the town of Santee; and, the Orange Line travels east and terminates at the Transit Center in El Cajon.

The transit center is just that, a place to transfer from the commuter train to a flurry of buses that spread out in all directions, delivering commuters to their respective communities, businesses, and homes.

I had a two-and-a-half-hour wait until my bus arrived, after which it would depart the transit center at 3:04 p.m.  The center itself is a huge roundabout, with buses entering from the east, and then circling the concrete plaza until they locate their designated parking place.

Here, the bus drivers would park their buses and wait.  If they were early, some drivers would go for a smoke, use the restroom facilities, or get a bite to eat.  With a little over two hours until my bus arrived, I sat on a cement bench that followed the curve of the roundabout and observed the commuters as they arrived, or who, like me, were waiting for their bus.

A student in the back of the bus kept opening the window, which compromised the air conditioning, and the bus driver kept yelling at him to shut the window.  This scene played out several times until the student finally complied.  Within an hour, the bus pulled into the small, border town of Tecate, and all the passengers exited the bus.  This was their destination.

After a smoke break, the driver maneuvered his bus back onto Highway 94, with me being his only passenger.  Having no idea where to go once we arrived in Campo, I asked the bus driver to let me off at the intersecting road that would lead me to the PCT Southern Terminal adjacent to the Mexican border.  I wasn't the first PCT hiker he’d transported to Campo, and he knew exactly where to drop me off.

Campo is not a place you’d ever visit unless you had a specific reason to be traveling Highway 94 along the southern border of the U.S.  Settled in the mid-1860s, primarily with settlers from Texas, the town has seen its share of bandito problems beginning with Mexican horse thieves coming across the border to raid the town’s farms and ranches for livestock.  (Kimball)

The year 1916 saw the arrival of the San Diego/Arizona railway, but passenger service only lasted until 1951, and freight service was discontinued in 1983, after a brush fire burned two wooden trestles. (Drury)

Cavalry units arrived just prior to WWII to provide border security and establish Camp Lockett; (military museum.org) however, as the army became increasing mechanized, the cavalry units became obsolete and the camp was declared surplus property.  Currently, the buildings of former Camp Lockett house a juvenile ranch facility operated by San Diego County.  Besides the juvenile ranch, the town’s largest employer is Homeland Security, which operates a large compound for Border Patrol personnel.

Right on schedule, the bus, with its lone passenger, arrived in Campo at 5:00 p.m.  The driver opened the door, pointed at a street sign that read Forest Gate Road, and said to follow the road to the border.  As the bus pulled away and disappeared around a bend in the road, I surveyed my surroundings. 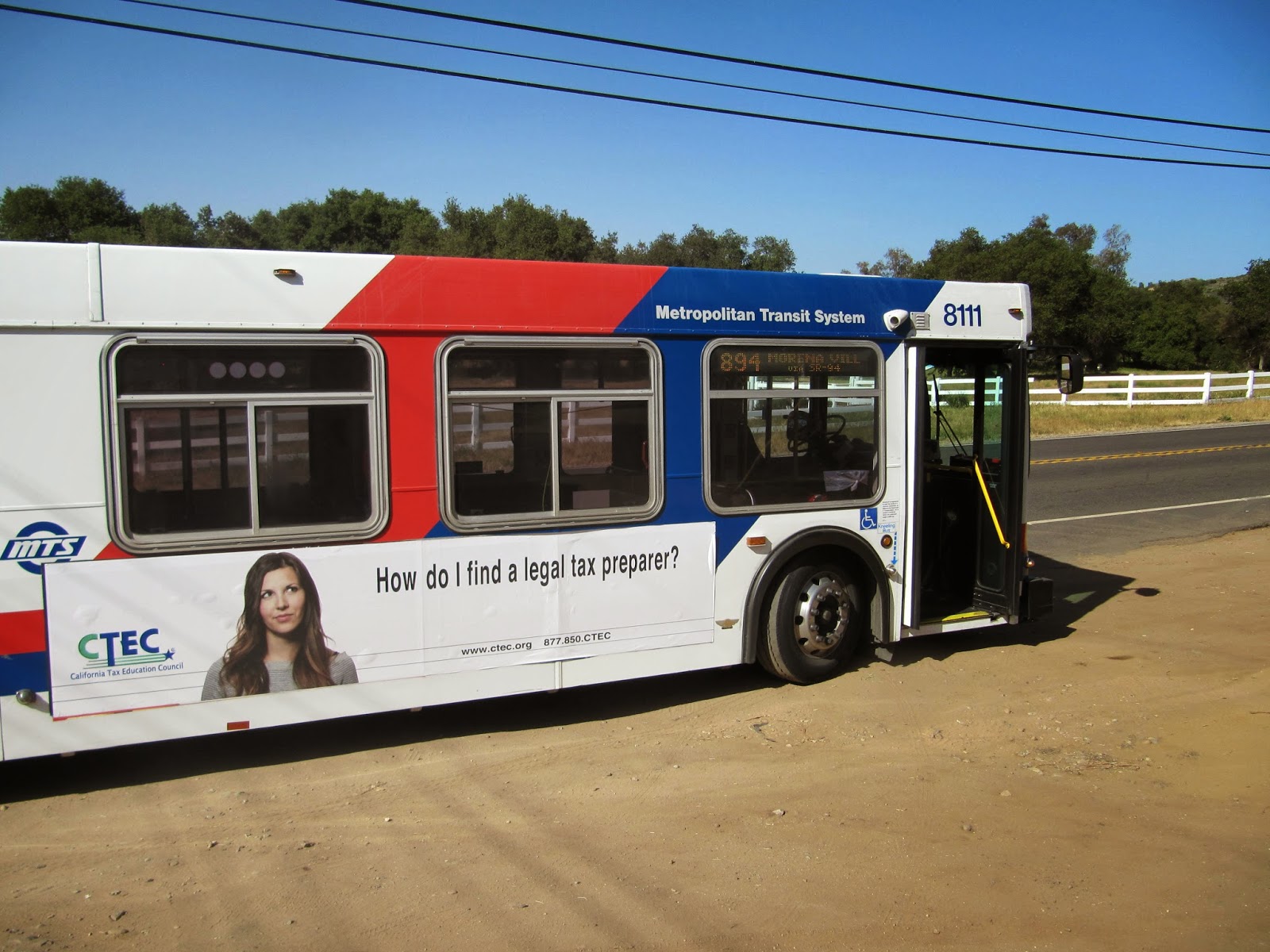 After a smoke break, the bus  driver headed for Campo
Posted by Richard Jones at Saturday, March 02, 2013