I was on the trail early this morning as I was anxious to make miles before the sun started to drain the energy from my body.  In doing so, I was immediately reminded of the Willie Nelson song, “On the road again, just can’t wait to get on the road again…”  The trail moved upward into the narrow gorge of Mission Canyon, crisscrossing the stream innumerable times.  At times, the climb was steep and I had to resort to counting units of eight steps to ensure that I made progress up the mountain.  I was alone on the trail, but I knew I could be passed at any time by hikers moving at a faster pace.

I no sooner had this thought when I heard noises behind me.  Turning around, I saw two creatures approaching me with a big dog on a leash.  From their appearance and dress I thought I was seeing characters from Lord of the Rings.  They looked like hikers, but I didn’t recognize them; I had never seen them before on the trail.  They were two young men with pronounced dark beards, dark, matted, dreadlock hair, dark hats and clothing, and carrying backpacks that seemed out of style and out of date for thru-hikers; and, as if to emphasize their vagabond appearance, they had an assortment of cooking pots and camping gear hanging from their packs.

Both were carrying miniature crossbows with sights, and one was carrying an instrument that resembled a guitar.  Instantly, I recognized that this little combo of three was the rambunctious hikers I heard the day before who had been singing, strumming, and barking under the cottonwood trees.  Everyone has a story, and I was anxious to hear theirs.

We chatted; they told me their names, but I neglected to write them down, so I don’t remember them.  They said they were brothers from Southern California and were intent on hiking the entire PCT.  They hadn’t done any hiking before; this was their first venture.  As for the miniature crossbows, they said it was their intention to forage for food along the way, to live off the land as much as possible.  I passed them later in the day as they were setting up camp. They said they liked to hike at night as it was easier on their dog.  After this encounter, I would never see them again.

As a side note, after finishing my hike, I saw a YouTube video of these two young men performing at Kennedy Meadows South.  They are very gifted musicians, and I should like to have heard their performance.  As always, things are never as they seem.

The trail continued its upward climb, and I continued counting to eight and resting often.  There is a heaviness deep in my lungs that just doesn’t allow me to suck in sufficient air to oxygenate the blood flowing throughout my body.  There’s no pain, just an irritation and I have to cajole my body to keep it moving, because it always wants to sit down and rest.  Eventually, the trail summits out at 8,750 feet, the highest point the trail will reach in the San Gorgonio Mountains.  From this vantage point, I can view the Mojave Desert off to the east, and a few miles farther up the trail, Lake Baldwin and Gold Mountain - geographical features associated with Big Bear Lake will come into view.

By 1:00 p.m. I was starting to drag; I was on autopilot as I moved along the trail.  Sometimes the trail was in the trees, and at other times it contoured around barren hillsides covered with a variety of bushes and shrubbery and it always traversed in and around gullies and ravines.  As I shuffled up the trail, my ears picked up on the sound of rubber tires on asphalt, and presently, I could see the movements of cars on Highway 38 below the trail.

Rounding the corner of yet another hill, and starting a gradual descent, I glanced ahead and saw people on the trail, and they were not moving. Coming closer, I saw what appeared to be trail magic, and indeed, it was.  It was Aloha, Toots Magoot's husband, who I met a few days before at Ziggy and the Bear’s hangout.
Aloha was not hiking the trail, but supporting his wife on her PCT hike.  There were many roads that came near or crisscrossed the PCT, and he would arrange to meet her and her friend, Tears for Beers, at these crossings or in trail towns such as Idyllwild or Big Bear Lake, and out of the goodness of his heart, provided trail magic for them and others moving along the trail.  On this occasion, he had set up four camp chairs, and lugged up the hill from his car parked alongside the road at Onyx Summit, several cases of bottled water, Gatorade, soda pop, and boxes of fruit, candy, chips, cookies, muffins, cupcakes, and a large bottle of Ibuprofen.

What a treat it was to sit and relax for a moment with a couple of cold Mountain Dews, a handful of potato chips, an orange, several cookies, and five pieces of Red Vine licorice.  Middle-age hikers Towers and Thirsty Boots are also enjoying the refreshments, and in between cupcakes and cold soda pops, they spread their tents out on the ground to dry them out following a rainstorm the previous night.

We were all glad to see one another, and the trail magic that Aloha had provided once again reaffirmed my conviction that all people are inherently good, that they care about others, and given the opportunity to give aid and assistance, will perform with amazing results.
Rejuvenated in body and spirit, I picked up my pack, swung it by one strap around my shoulder and onto my back, readjusted the hip belt strap, stuffed an orange into one pocket and a can of grape soda into another, waved good-bye to Aloha, and headed on up the trail
.
From Yogi’s guidebook and from reading hiker journals, I understood that at mile 250, I was going to see wild animals in cages.  I moved along and covered the miles as fast as I could, which interpreted, meant I walked slowly.  But, no matter, I always arrived at my intended destination.

Was I ever tempted to stop walking and just sit?  Of course, but there were consequences for doing so. After I finished my ocean row and arrived in Miami, Florida, via a shuttle flight from Nassau, I helped my friends from home load the rowboat onto a flatbed trailer for transportation back to Salt Lake City.  I then flew to New York City to appear on the Today Show and participate in an interview with Katie Couric.  At the last minute, Ann Curry was substituted for Katie to do the interview.  In the course of our conversation, as I was explaining to Ann some of the difficult times I had out on the ocean, i.e., loss of the rudder, nearly run over by ships, boat rolling over, she asked me,

“What was your motivation to keep rowing?”  I quickly replied, without even thinking, “To get home, as no one was going to come out there and row for me.”

It’s the same with hiking the PCT; my motivation to keep going is to get home, which means crossing the Canadian border, as there is no one who is going to come out and walk for me.

At mile 250, I crossed a dirt road that appeared to be the entrance to a ranch.  The entrance was flanked on either side by a tall pine tree with a sign that hung between them, which read Cienaga Creek Ranch.  Next door to this private ranch which had cabins for rent, was property belonging to Randy Miller, whose profession was training animals to perform in movies.  The following was taken from Mr. Miller's website - Predators in Action:

The PCT followed right beside Miller’s property, which was protected by a twelve-foot-high chain-link fence.  Beyond the fence were the enclosures which housed the animals.  The cages appeared to be fairly large allowing the animals freedom to roam, and from my vantage point outside the fence, I could see several large bears pacing back and forth within their housing. 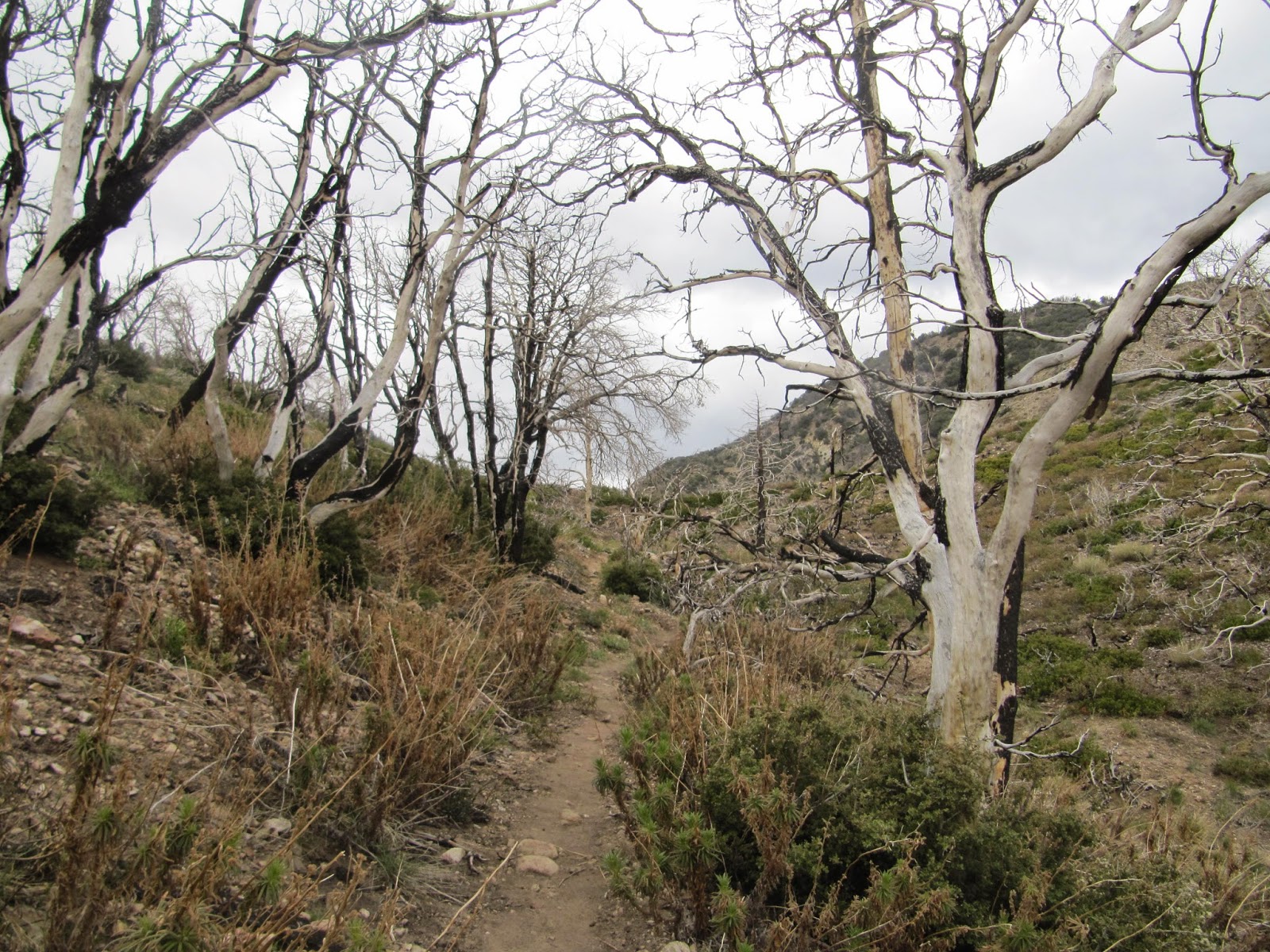 As with so much of Southern California, this section of the trail has been burned.

Blow downs are a constant problem along the trail. Volunteer maintenance crews will come in and clear away the debris. 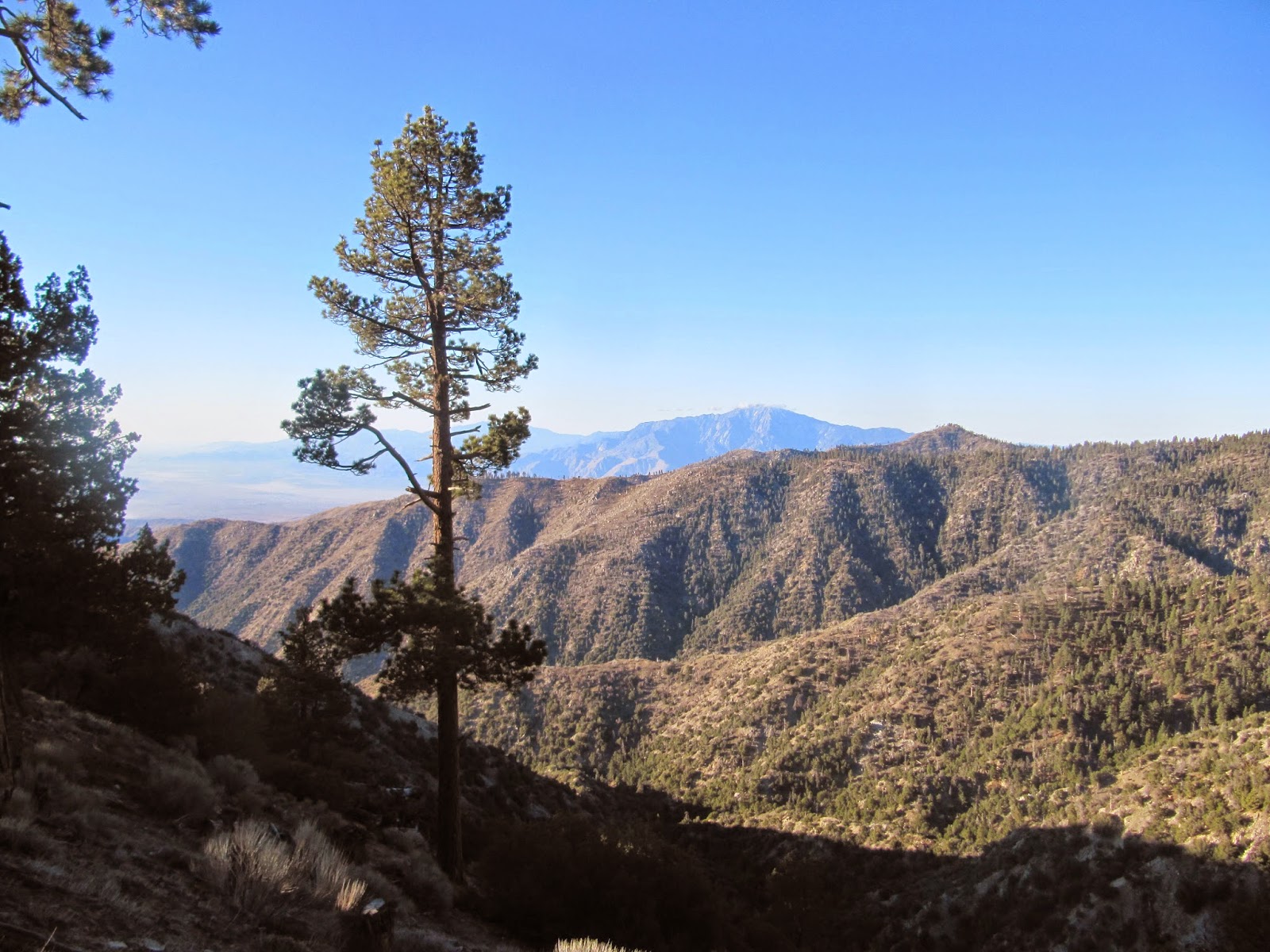 Walking the ridge line, looking north towards Big Bear Lake and my next resupply. 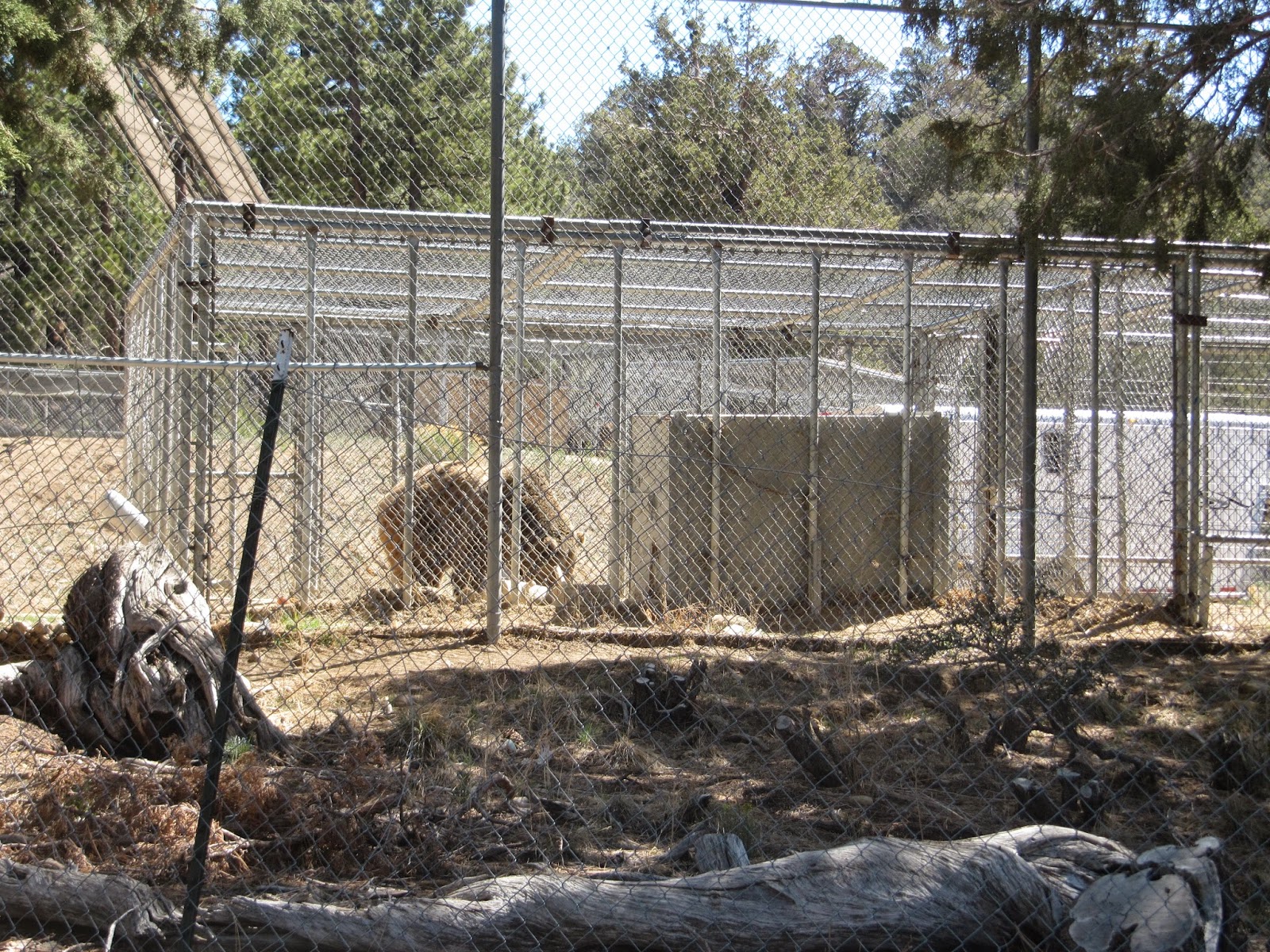 Coming around a corner of the trail, I found Aloha providing a wonderful bit of trail magic. 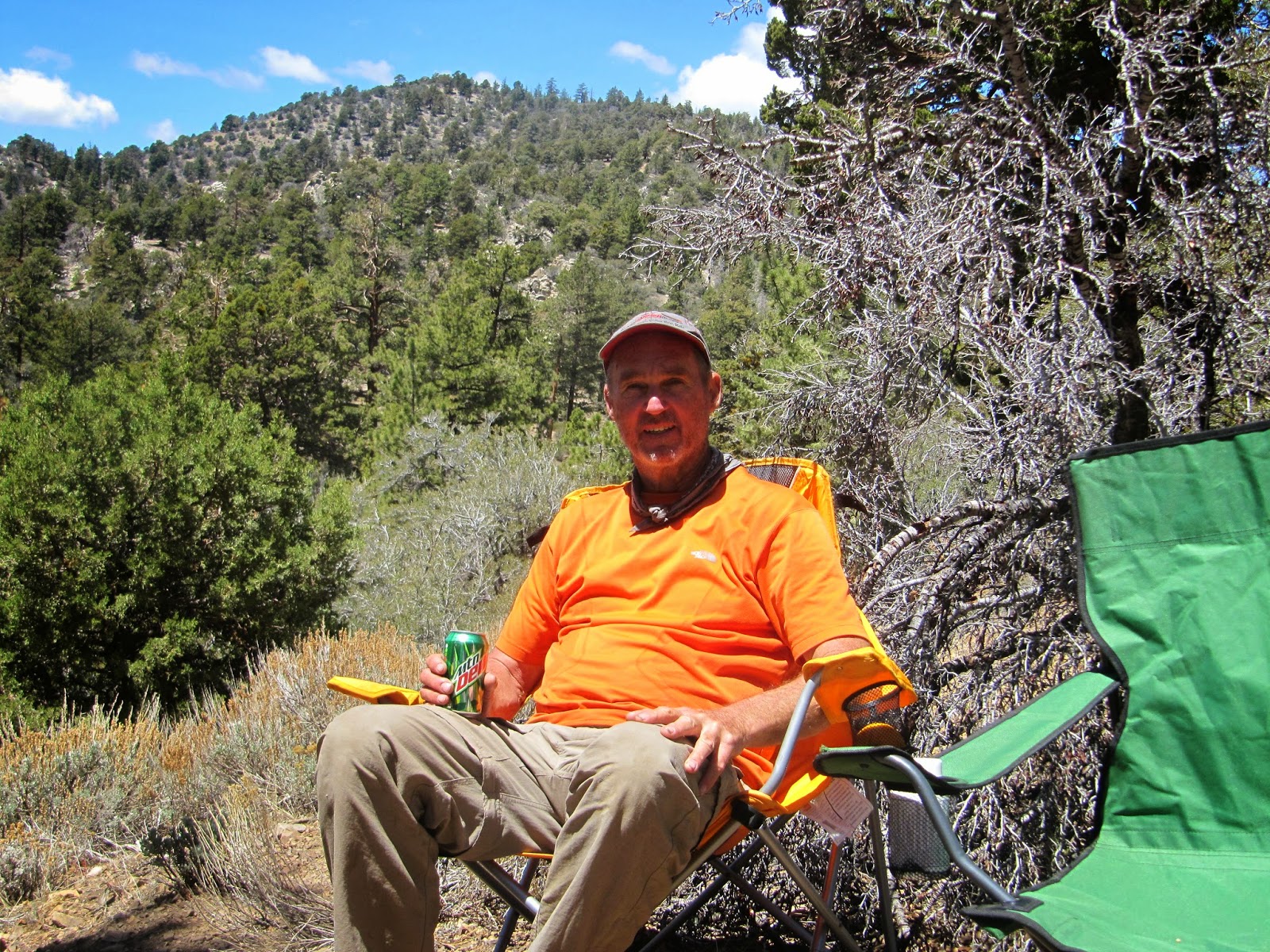 It was great to relax for a bit, have some cookies, a cold soda and a bag of chips. 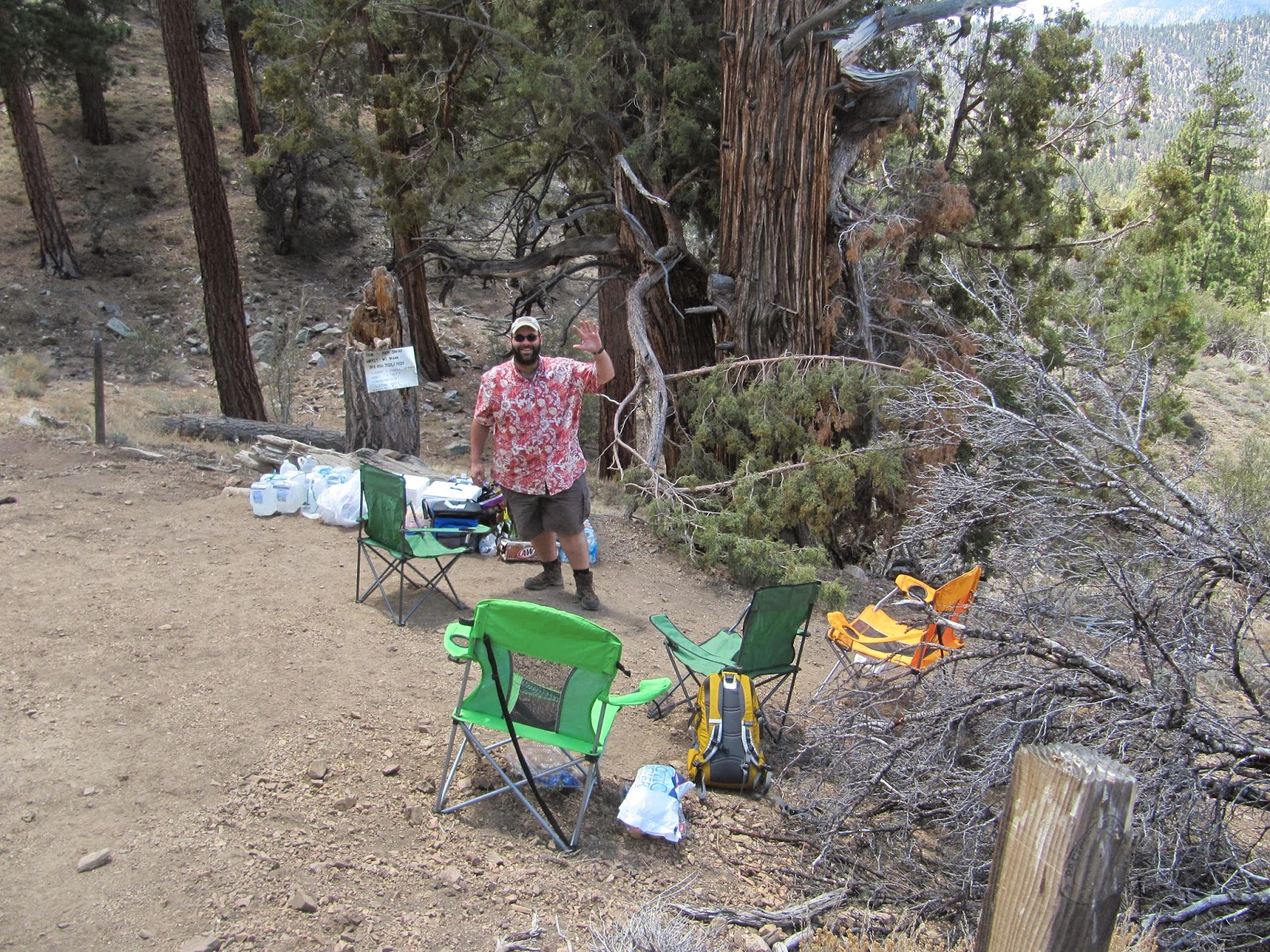 Back on the trail and saying good-by to Aloha. I would see him several more times before I crossed into Canada. 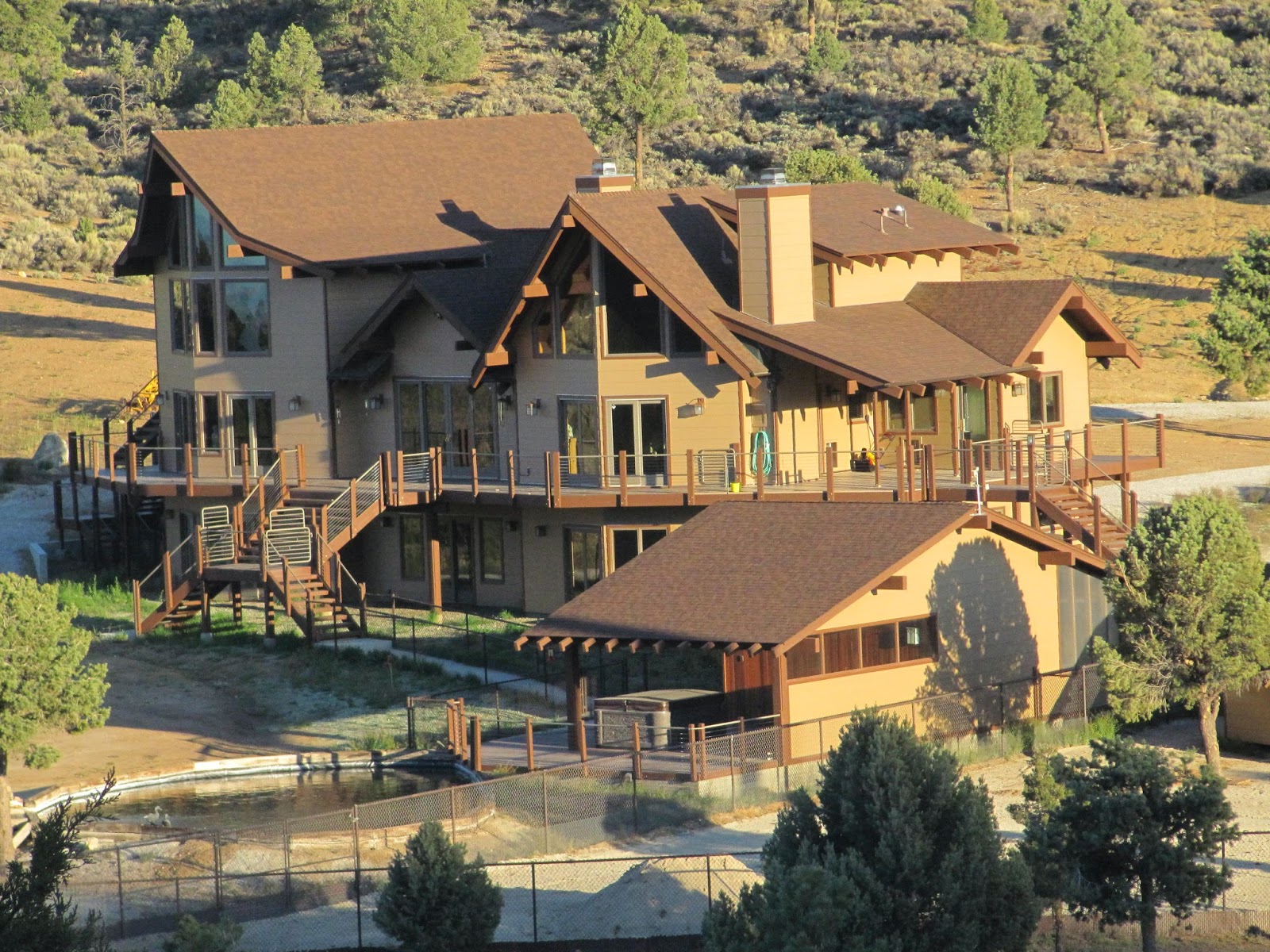 An exceptionally large house on the outskirts of Big Bear.