Part 13 - On to Whitewater Preserve

The lure of the Pacific Crest Trail is the never-ending parade of God’s majestic creations.  With every turn of the trail, a cornucopia of beauty is arrayed before the viewer’s eyes; it’s never the same, it’s always changing, even the rugged and seemingly barren desert and foothills of the terrain surrounding Ziggy and the Bear’s home.

The trail crossed dry streambeds and entered the mouth of Gold Canyon, an offshoot of the east-to-west trending San Andreas Fault.  A well-defined Jeep trail traversed the bottom of the canyon, but the trail contoured along its upper reaches, avoiding any conflict with maintenance vehicles that traveled the canyon road to service the massive wind turbines of the Mesa Wind Farm that overlooked Ziggy’s place.  Steadily upward the trail climbed, passing Teutang and Hatchery Canyons, and then descended to the Whitewater River, so named because of the flood waters that surge through the canyon during spring runoff.

The river at this time of the year can be crossed just by stepping on rocks.  A trail marker alerted hikers to the existence of the Whitewater Preserve downstream about a quarter mile.  It’s an oasis of trees and manicured lawns and the former site of the Whitewater Trout Farm, and formerly a place not terribly friendly to hikers seeking water and a resting spot.  However, all that changed with the purchase of the facilities by the Wildlands Conservancy, along with additional lands from the BLM.  The facilities are now open to the public, and camping was allowed.  On an impulse, I elected to walk to the ranch, to rest and have lunch, and I’m glad I did.

Surrounded by the realities of a harsh desert environment, the former trout farm was an oasis of sparkling pools laden with fish, lush vegetation, and giant cottonwood trees that gave shade to the wide expanse of the picnic area.  After eating my lunch, I decided to try and call my high school friend, Ken Cutler, on my satellite phone.  I knew he was going to be in Carlsbad, California, in a few days and I thought I would try to meet up with him somewhere along the trail, and have him bring me a battery charger for the phone as well as a spare battery.  I made contact with Ken and he agreed to bring the items.  Our meeting place was to be at the McDonald’s Restaurant in El Cajon Pass on I-15 – seven days and 120 miles away.

As I stood in the parking lot next to a trail leading into the picnic area, and while putting my satellite phone away, a male visitor standing next to me began making inappropriate comments about a female hiker he was watching doing yoga exercises on the picnic lawn.  In hindsight, I wished I had called him on his comments, but I didn’t; I just walked away.

Back on the trail, I continued walking up the Whitewater River.  I met a few hikers who were taking time to enjoy the cool water of the river.  One had shed all his clothes and was spread-eagle on the sand with only a small towel to cover his plumbing appendages.  The trail veered east, crossed over two ridges, and dropped into Mission Creek.  This creek and the trail beside it would climb nearly six thousand feet into the San Bernardino Mountains.

I hadn’t gone far up the Mission Creek trail when I heard dogs barking from a location under several lofty cottonwood trees, and then loud singing and the strumming of a guitar.  I figured it was just a bunch of rambunctious trail hikers taking a break and enjoying themselves.  I passed by without seeing who or what was making the commotion.

The uphill climbing was exhausting, and coupled with the heat of the sun, I elected to camp early and get some much-needed rest.  I located a flat spot just off the trail, laid out my bedroll, and then proceeded to unload my pack.  After only two and one-half weeks on the trail, I had developed a system for laying out my campsite that enabled me to find anything at a moment’s notice.  The first thing to go down was my ground cloth, followed by the Z-foam pad, and then my inflatable pad, followed by my GoLite down quilt enclosed in the ultralight TiGoat bivy sack
.
The bivy sack was not waterproof and I used it primarily to keep the sleeping bag clean and the bugs off my face.  I placed a white trash compactor bag next to my sleeping bag and arranged the contents of the backpack on it.  Some items like rain gear, satellite phone, and extra food remained in the backpack.  I placed my hat next to my head with my headlamp, cell phone, camera, and glasses inside it.  Shoes and socks were placed on the ground next to my feet.  A full water bottle lay next to my hat. Once I was on my air mattress and my shoes and socks were off, I never moved from my bed.

When everything was just the way I liked it and I was ready to fix my evening meal, which I always did while sitting on my sleeping bag, I noticed that there were ants all over the place.  I had placed my sleeping bag over the top of several anthills.  Dang, the little buggers were everywhere.  I put my shoes back on and searched the ground for a place that didn’t have the little pests.

Once located, I dragged my ground cloth with the bedroll on top of it to the new location and rearranged all the items around the bed.  In the midst of all this activity, Phatman Du came by.  He looked as tired and haggard as I felt.  I offered to share my space with him, but he elected to go on.  It was only 6:00 p.m. and it wouldn’t get dark until 9:00 p.m.  I couldn’t blame him for moving on and wanting to make a few more miles. 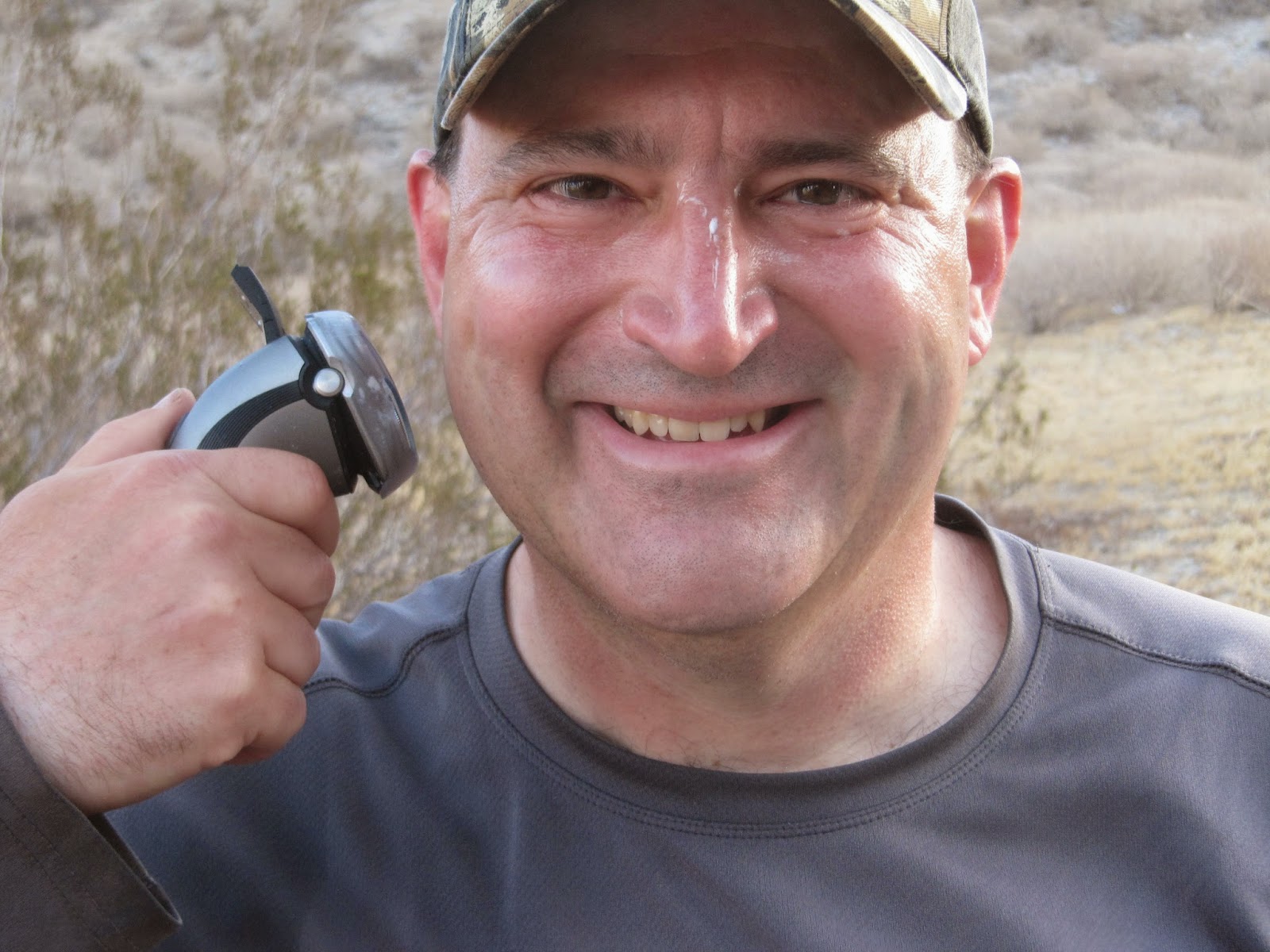 Atlas, who left Ziggy's place before I did, shows me how he stays clean shaven throughout the trip. 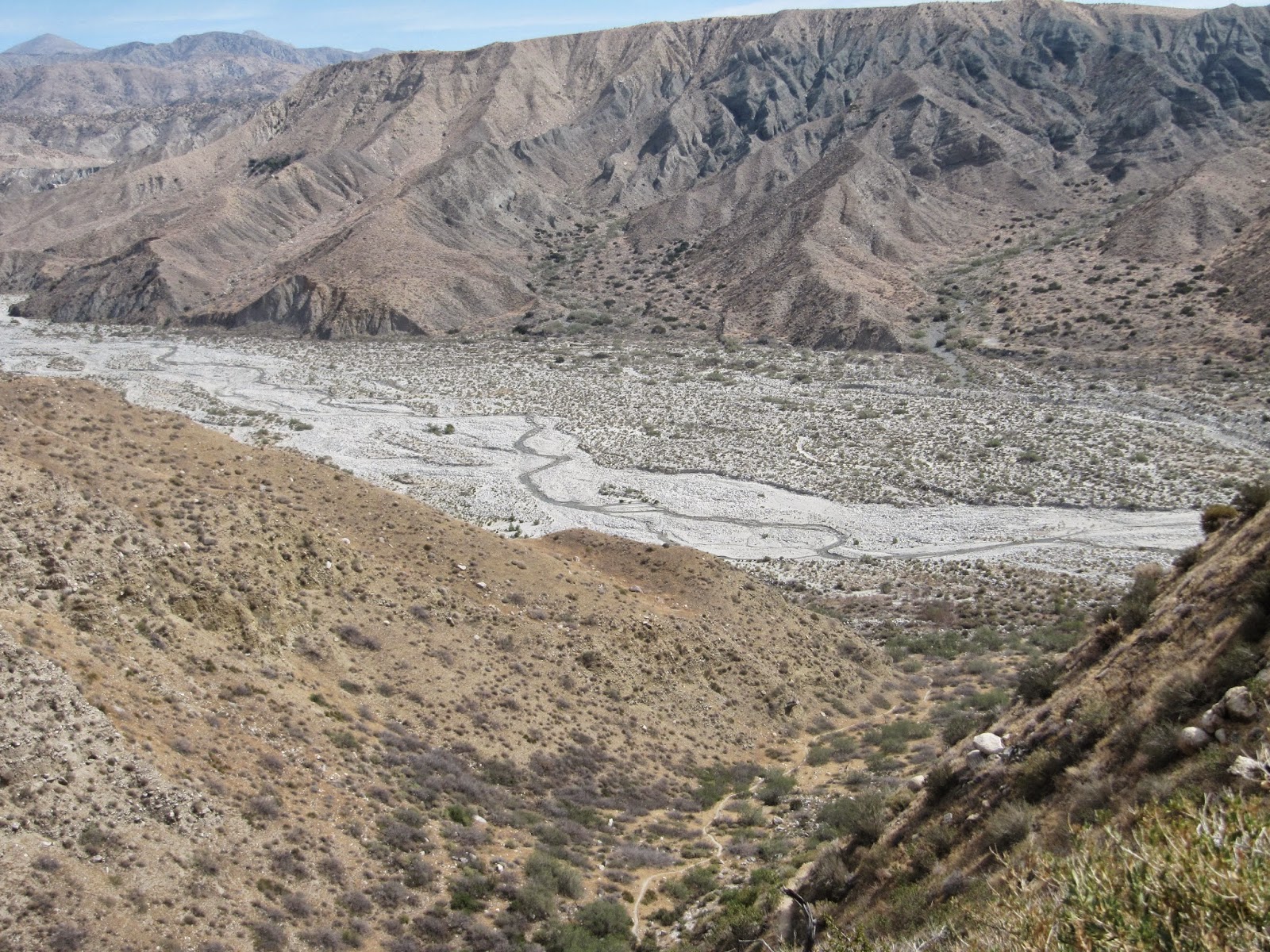 The Whilewater River flows out of the mountains, across the desert to the Whitewater Preserve. 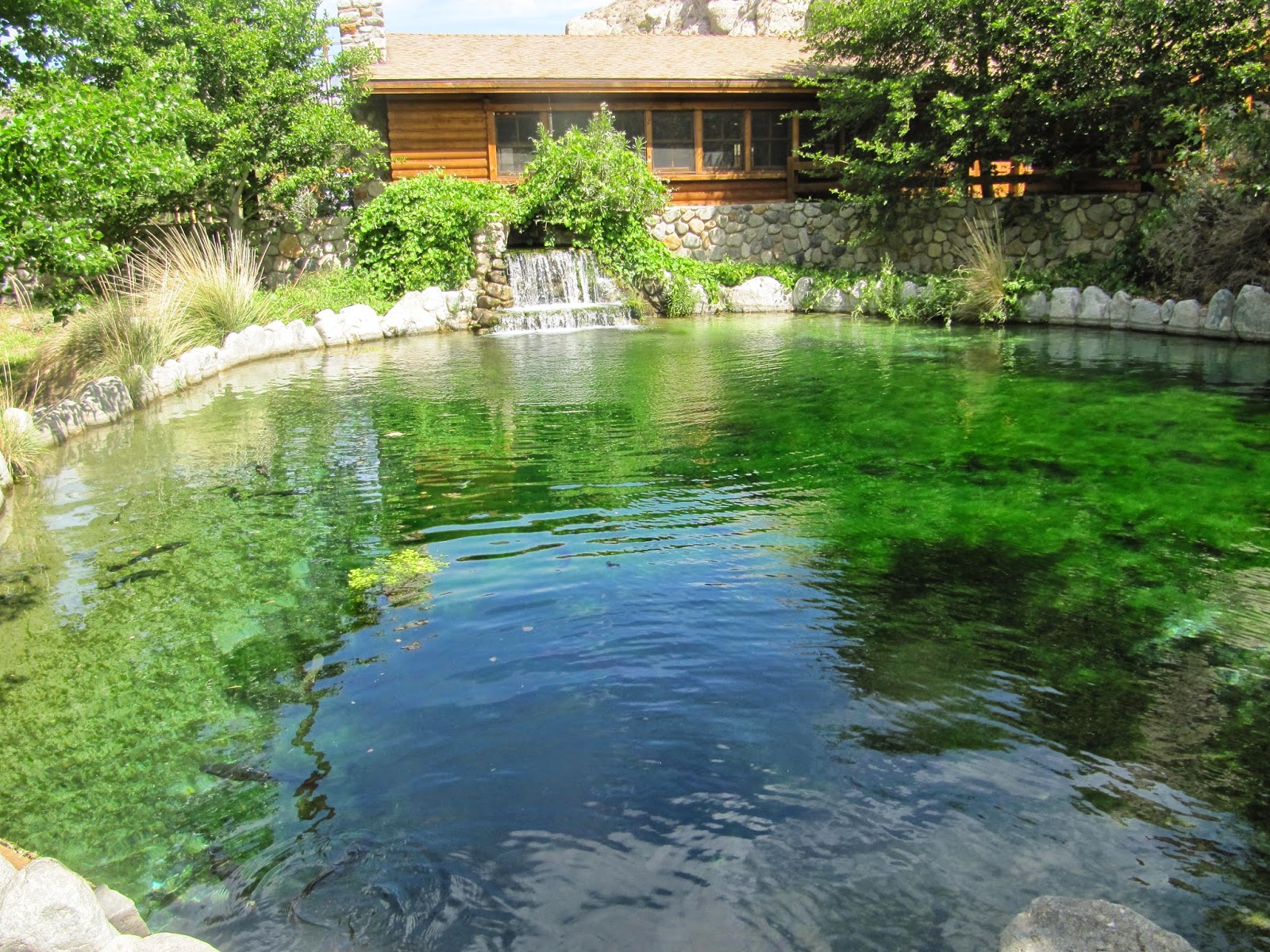 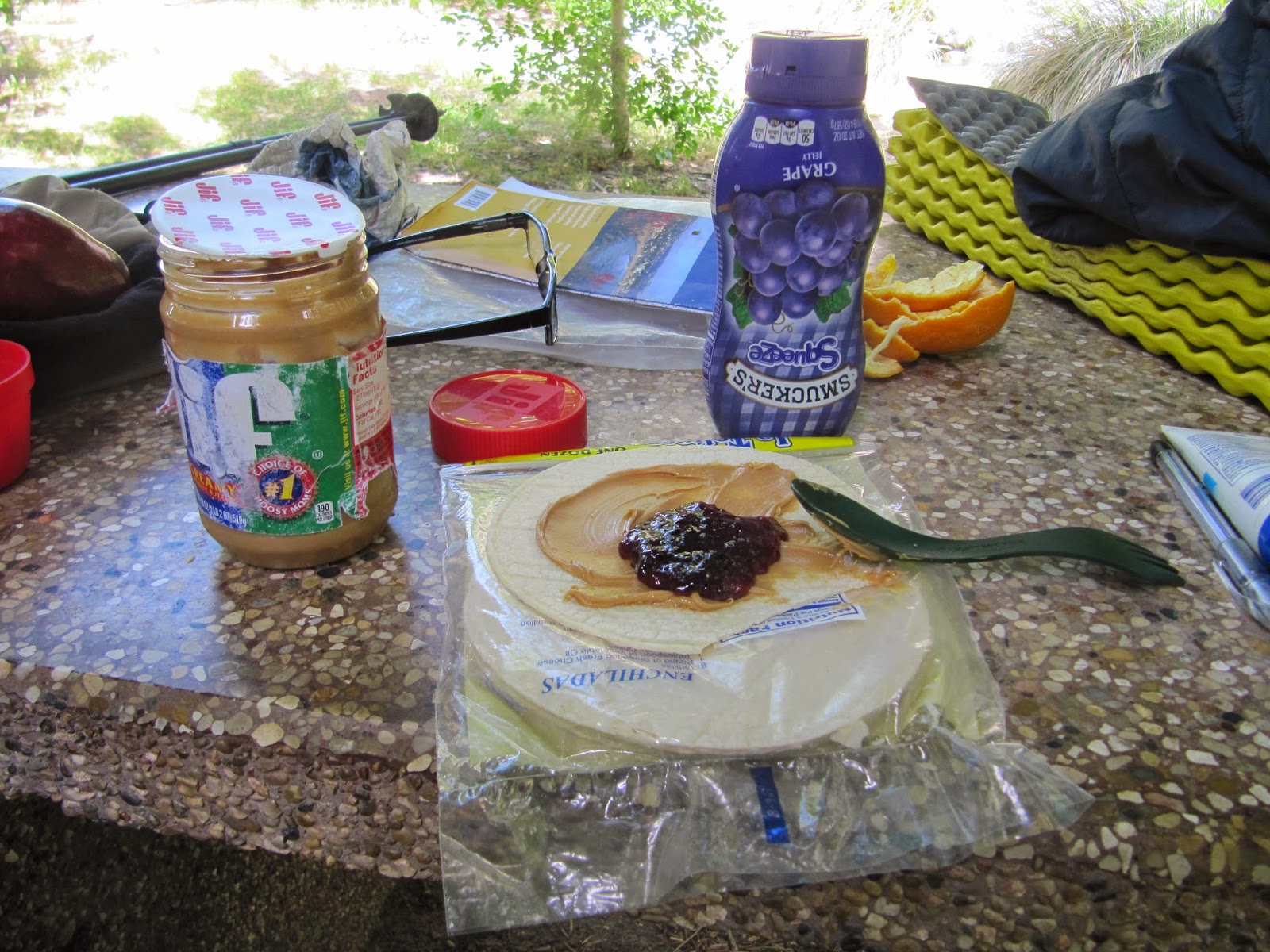 Under the shade of the Cottonwood trees, I enjoyed my usual lunch meal. 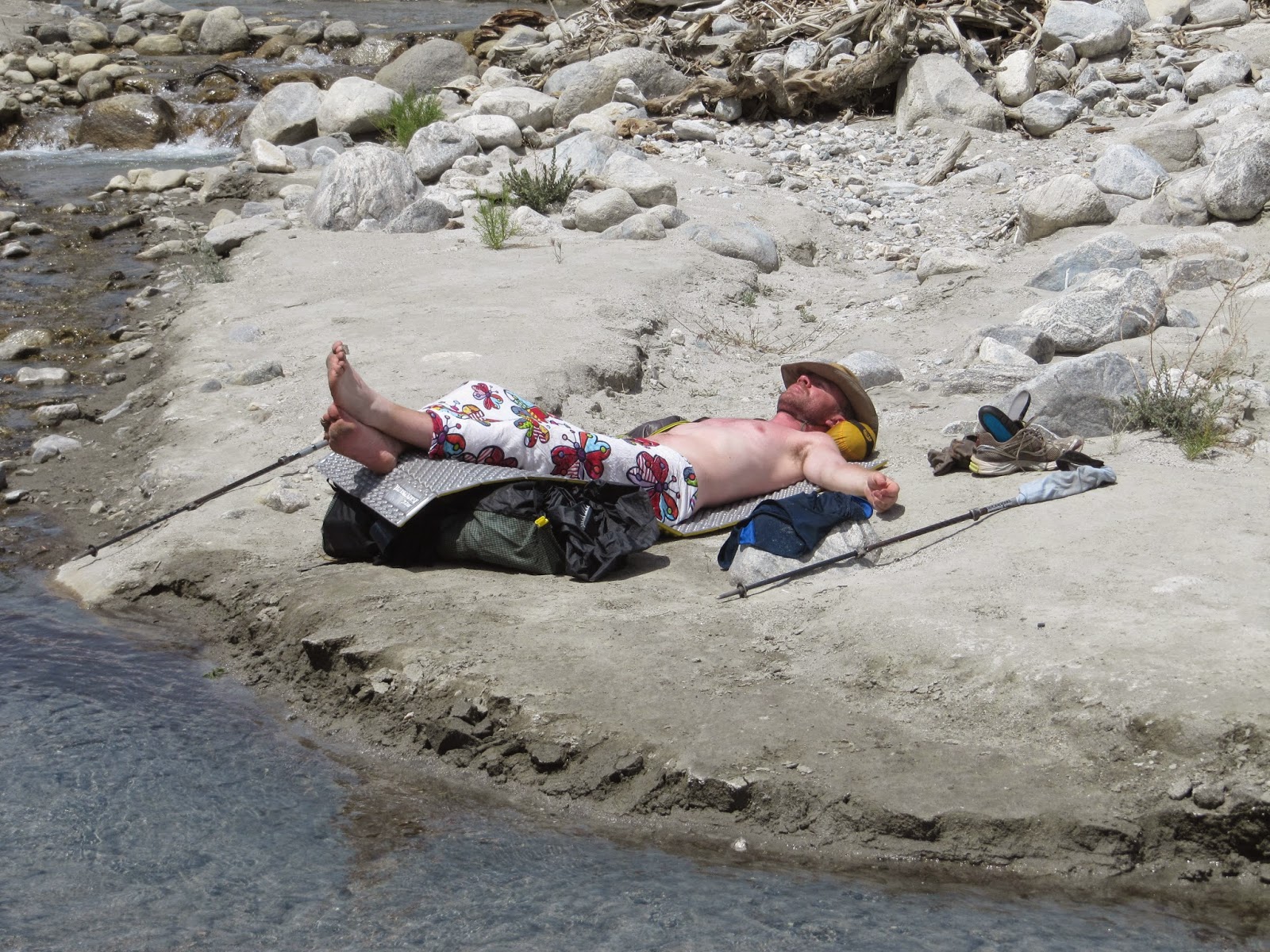 This hiker really knows how to enjoy his time on the trail. 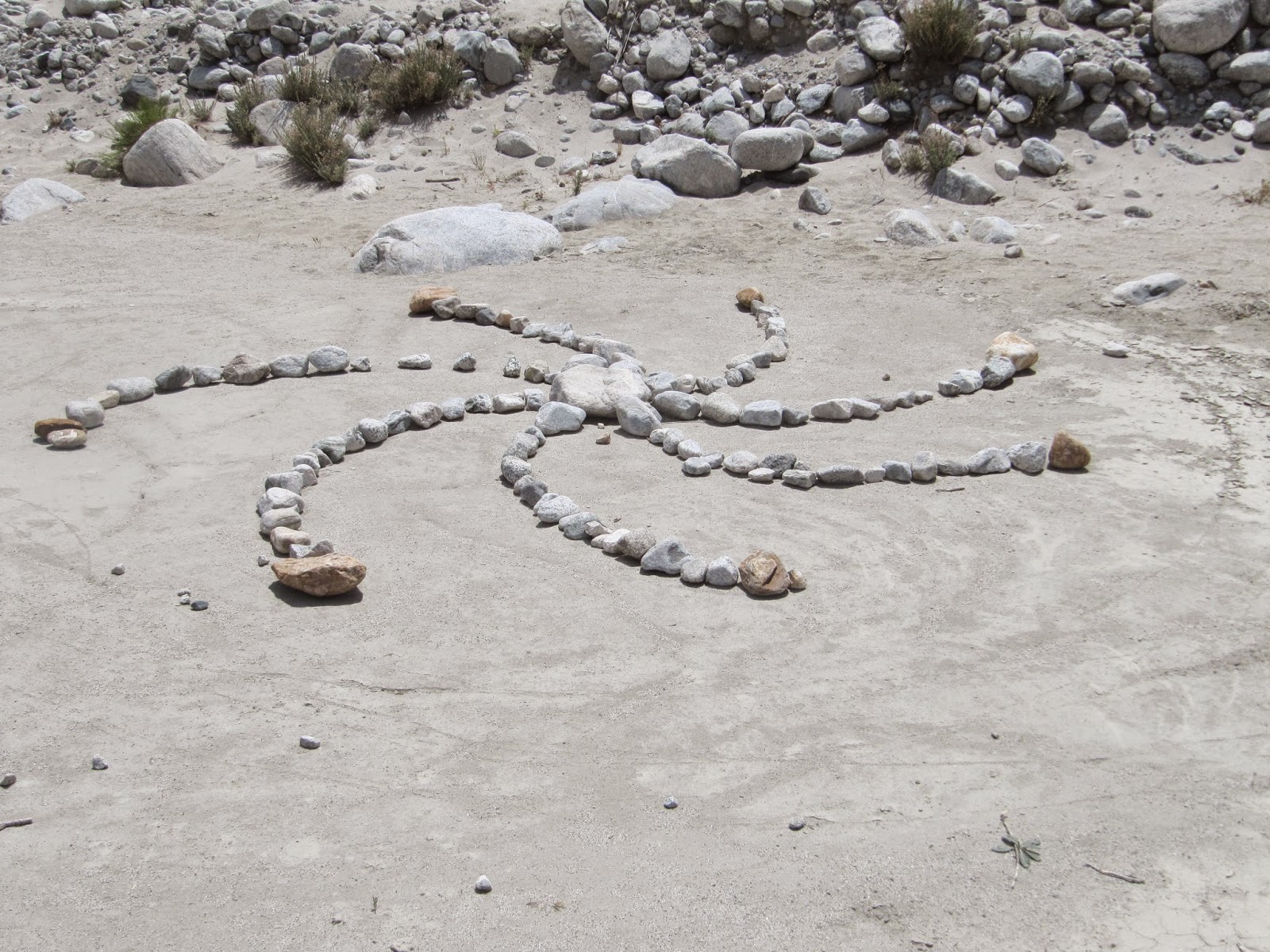 Rock art found on the banks of the Whitewater River. Springs floods undoubtedly will wash it away. 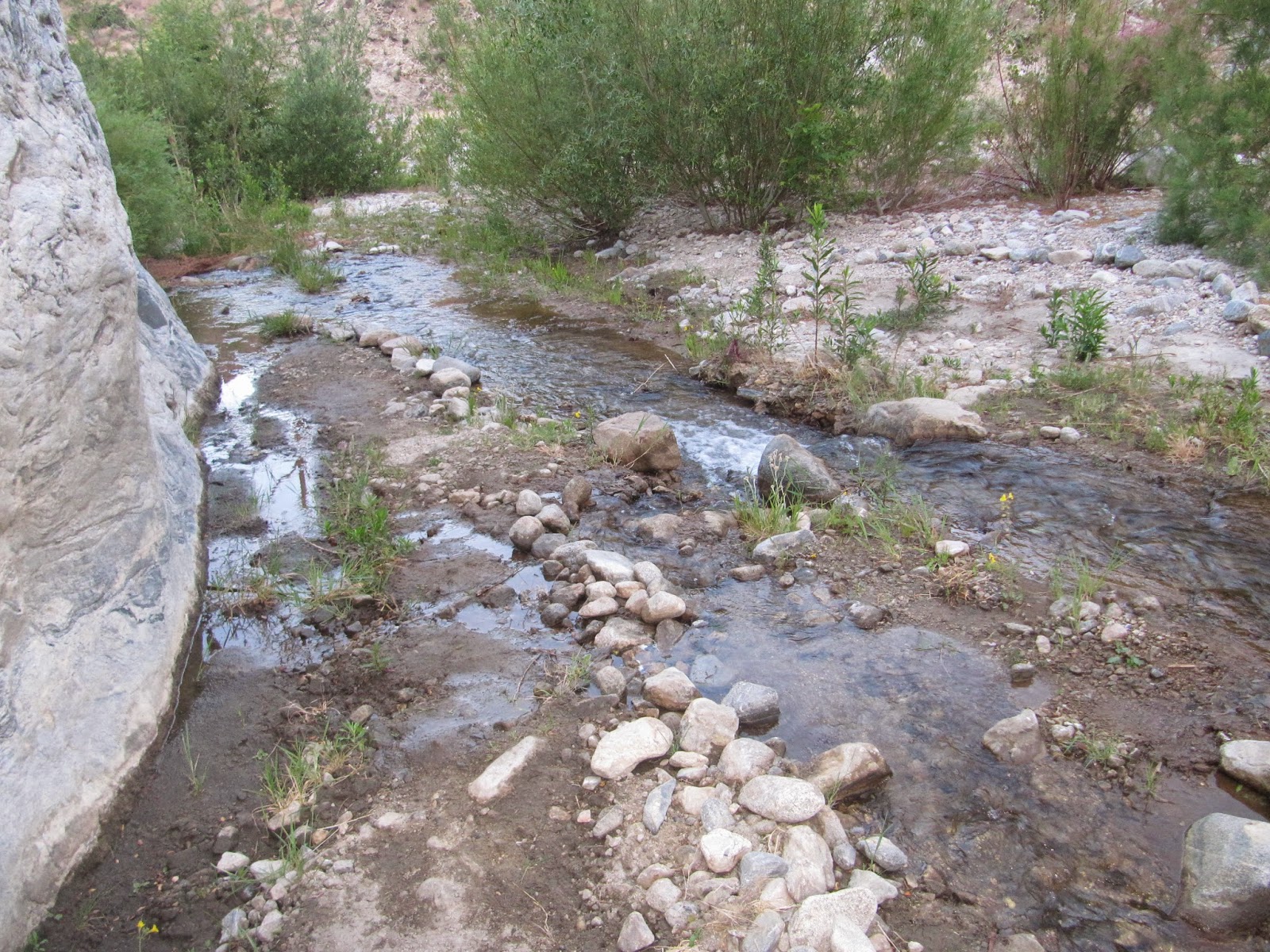 The trail, as it heads into the  mountains, crosses the river numerous times. Just count on getting your shoes wet. 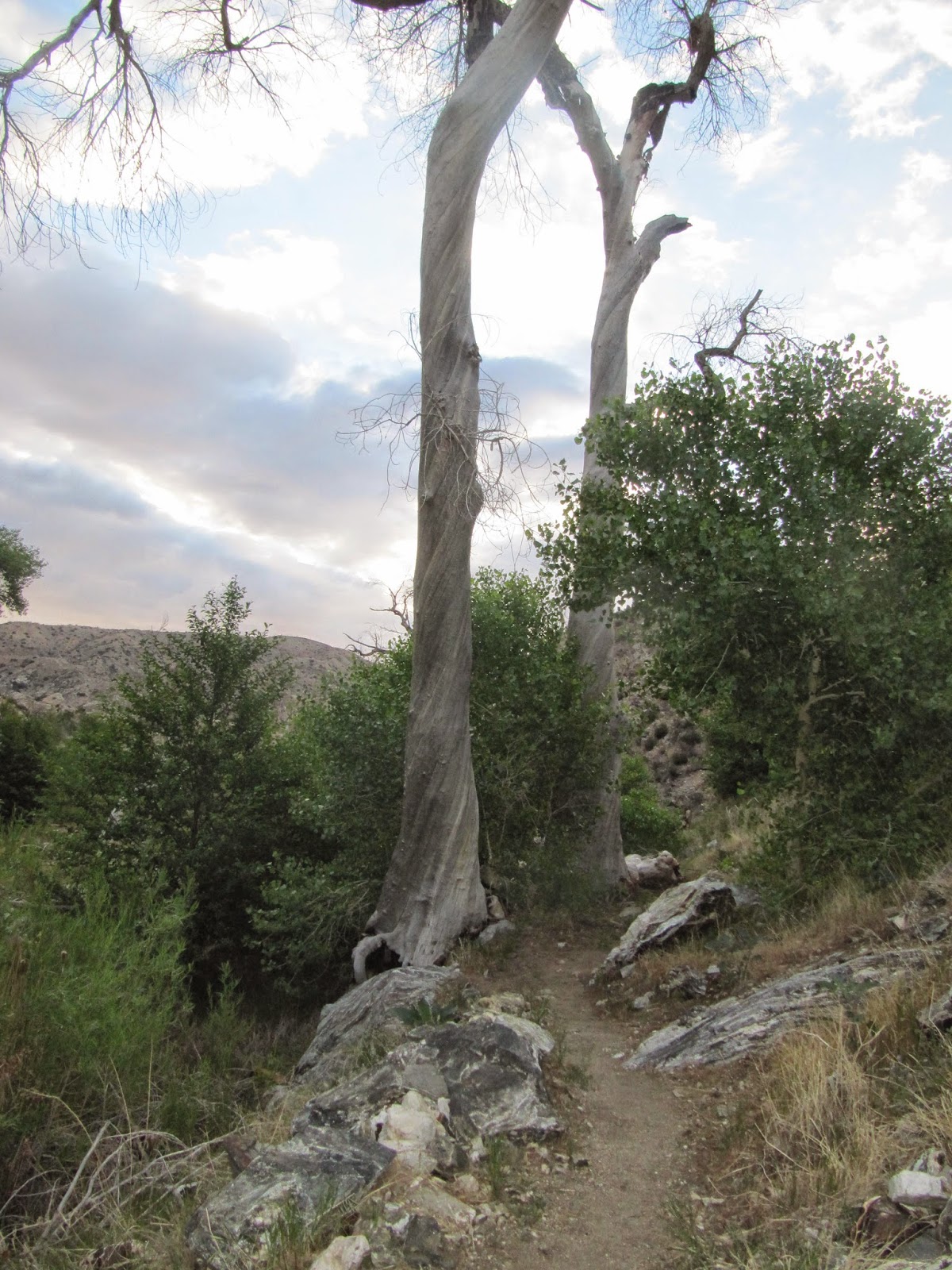 Out of the river and gaining altitude as the trail climbs higher into the San Bernardino mountains.
Posted by Richard Jones at Wednesday, March 13, 2013