The climb up the forty switchbacks was exhausting, and I really didn’t feel up to climbing any higher than was absolutely necessary, so I moved on.  The vistas from the top of the Baden-Powell ridge were stunning; to the south, I could view the canyons and rugged terrain of the Sheep Mountain Wilderness, and beyond that the Los Angeles Basin, while to the north, the desert communities of Pinion Hills and Phelan were visible.

Somewhere on the downhill side of the Baden-Powell Summit, I made camp for the evening.  As night came on, the lights of the desert communities to the north began to glow brighter and brighter, and while they looked like they were the lights of one continuous city, I knew that they were lights from communities and individual homes and ranches spread far apart.

My next water source was Little Jimmy Springs, and then the trail, after crossing Highway 2, would begin an eighteen-mile detour to protect an endangered frog species called the Yellow-legged frog.  I was concerned about finding the right trail for the detour, as my last resupply box did not have maps for this section of the trail and I no longer had my Garmin GPS unit with me.  I wasn’t using it and felt that it was just extra weight, and thus sent it home with my wife at our Cajon Pass rendezvous.
I obtained four liters of water at the spring, then uttered a silent prayer and asked my Heavenly Father to assist me in locating the right detour trail in case it wasn’t obvious to me.  A short distance from Little Jimmy Springs was Little Jimmy Campground, and as I passed through it, I noticed there were quite a number of hikers camped around the area.  Some were still in their tents and a half dozen or so were standing around a campfire.  Approaching from a side trail was a middle-aged hiker ready to leave camp and hit the trail.  In his hand he was carrying the same Garmin GPS as I used.  I knew instantly that my prayer had been answered
.
I introduced myself as Rabbit Stick and asked if I could walk with him for a while, at least until we got through the yellow-legged frog detour.  He was fine with that, but said he was a slow walker.  I told him I was too.  We walked together for several miles, crossed Highway 2 for the third time, found the detour trail, but elected not to follow it.

The hiker’s name was Lou the Lady Killer.  I was glad I was with him, as I would not have found the correct trail without maps or GPS, of which I had neither.  We hiked for another six miles until the trail again crossed Highway 2.  When it hit the road, the trail ended at a cliff across from the road and it wasn’t clear whether the trail went to the left or right.  Lou consulted his GPS and determined we should go left.  As we proceed left, coming down the trail from off the mountain was Jess, aka Night Crawler.

We invited her to join us on our walk.  We went about two miles, passed through several tunnels, and eventually came to a wide bend in the road.  Sitting at a roadside table were two elderly bicyclists.  We struck up a conversation with them.  One was eighty-three and the other was seventy-five, and both fit as a fiddle.  In the course of our conversation, they assured us we were heading in the wrong direction, and that if we kept going we would eventually end up back at Wrightwood. 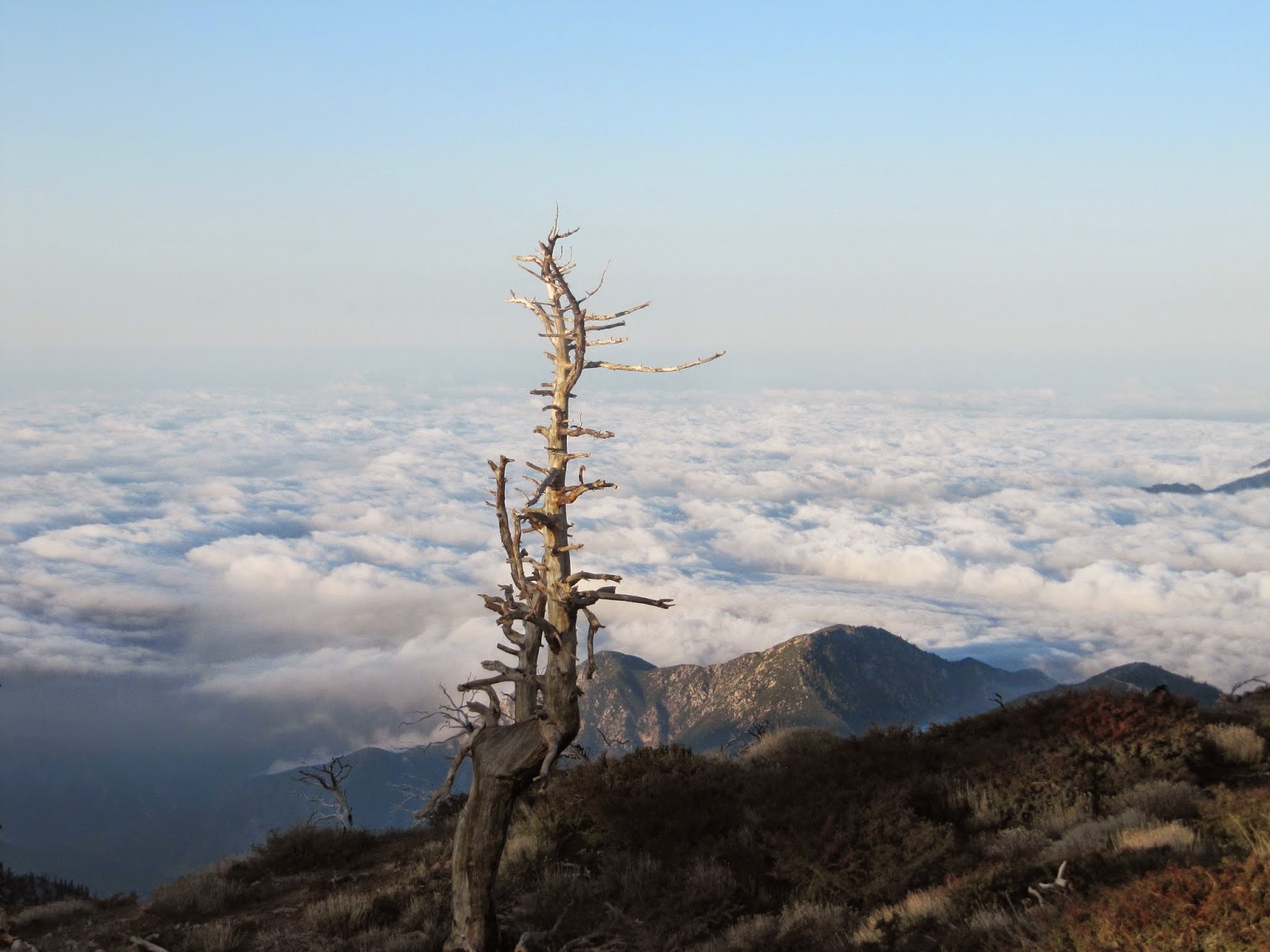 From the top of Mt Baden-Powell. Underneath those clouds, looking towards the west is the Los Angeles Basin. 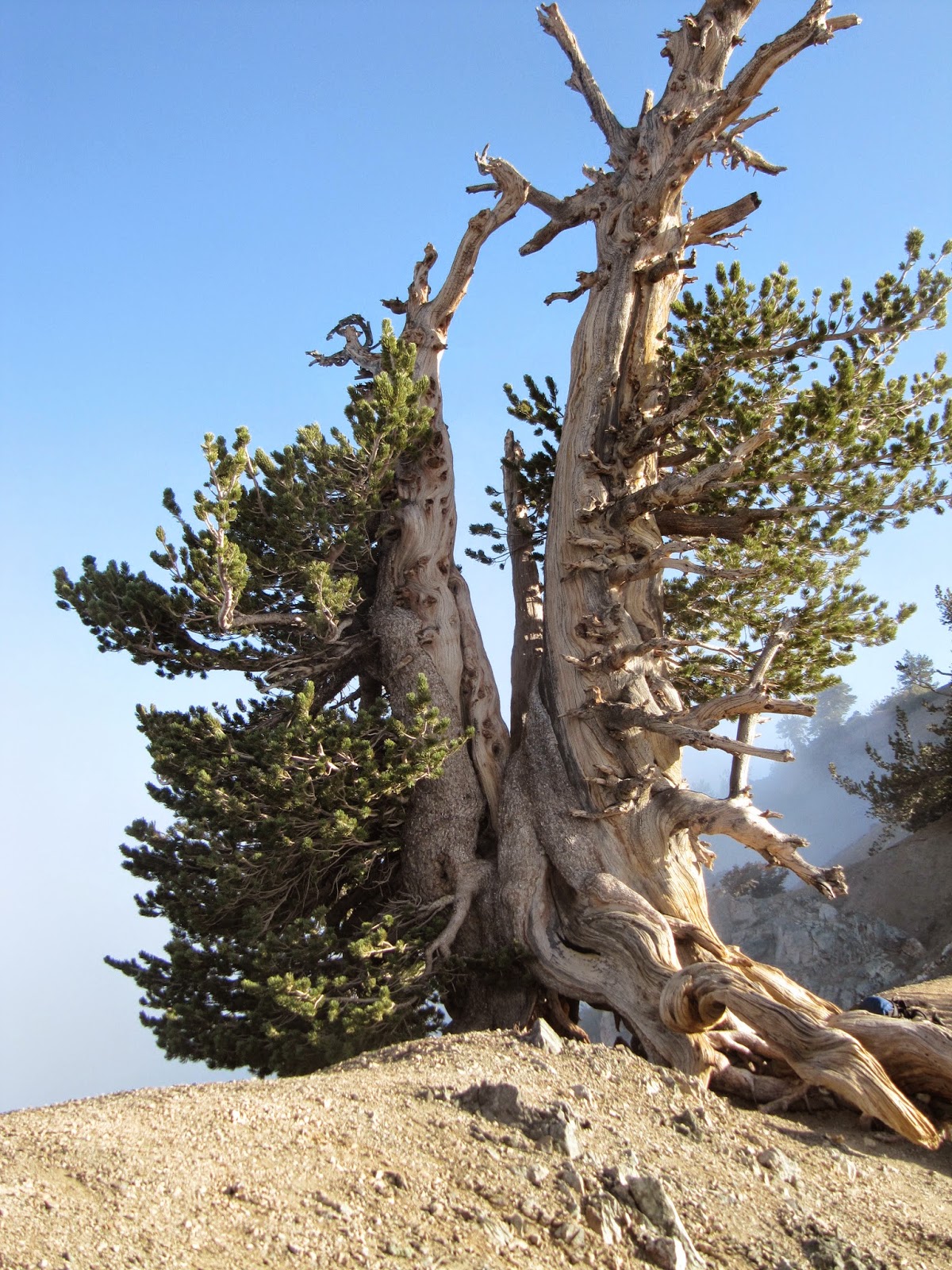 This tree lives right on the ridge line, at the top Baden-Powell. It is constantly buffeted by winds, and frequent storms, yet it survives. 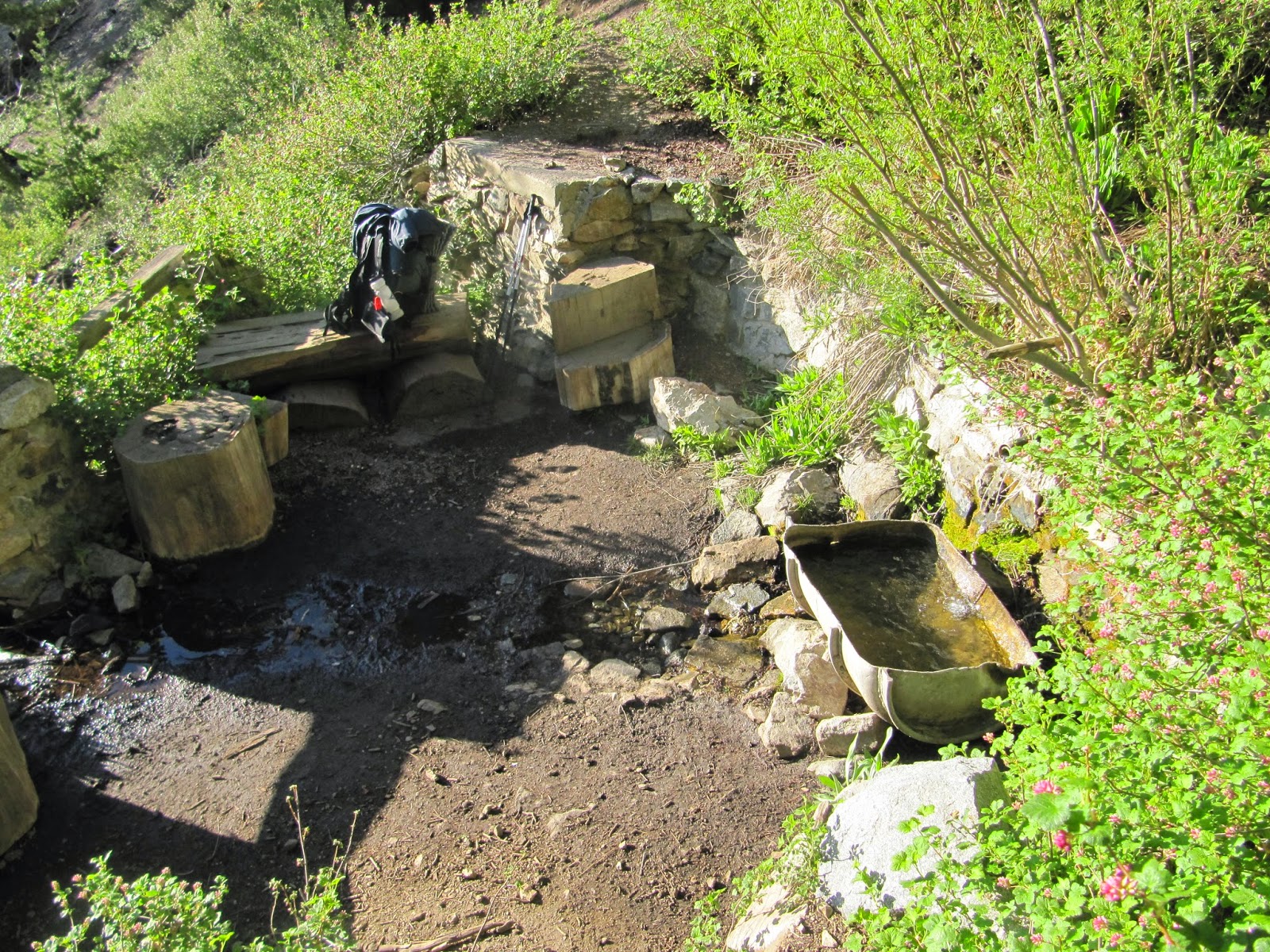 Little Jimmy Springs. It's been developed for a long time and the water is excellent. Lady Killer and Night Crawler heading down Highway 2 - in the wrong direction. 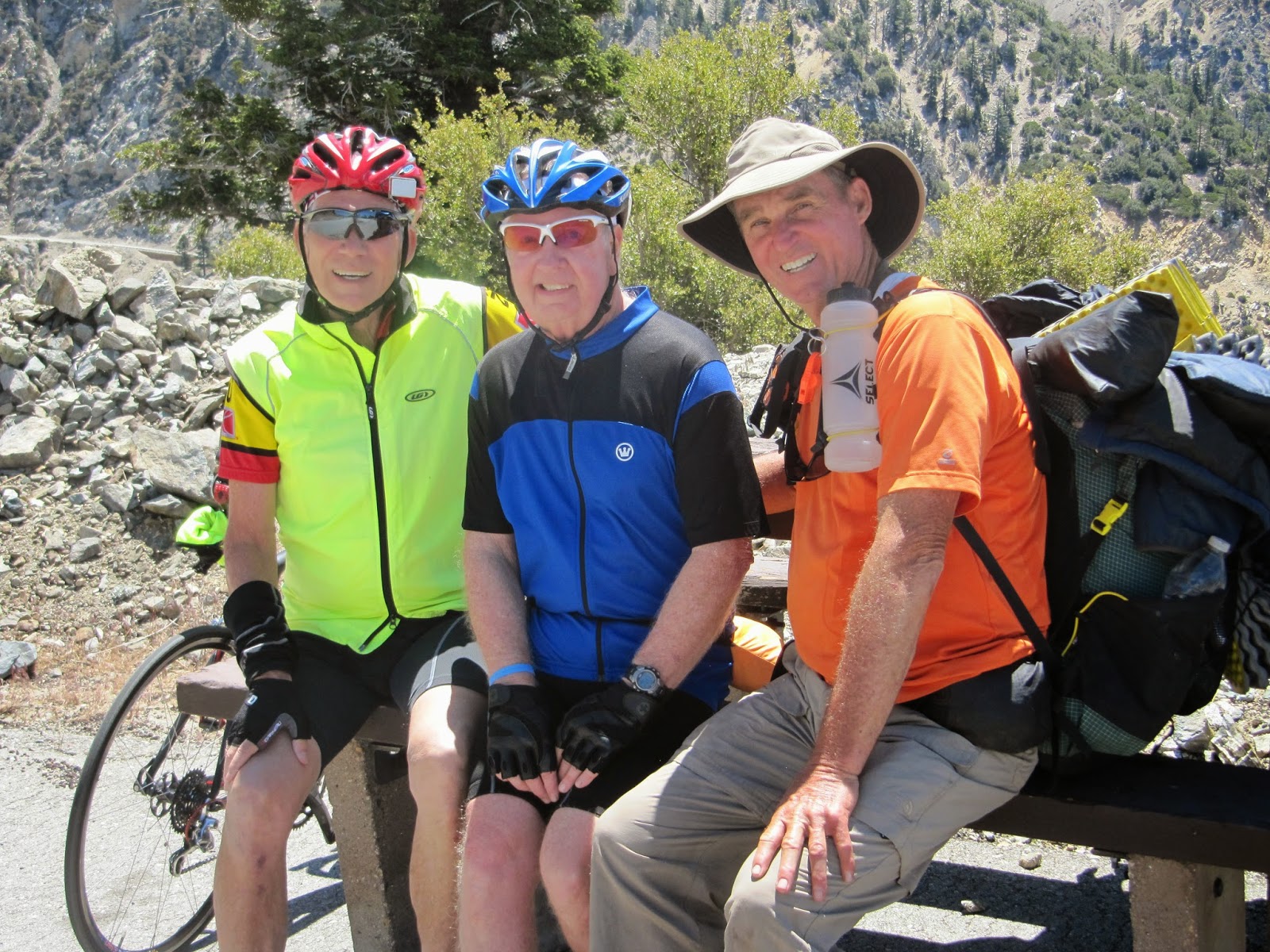 Thanks to these two gentlemen bicycle riders, 75 and 83 years old respectively, they informed us that if we stayed on this road, we would soon be back in Wrightwood. 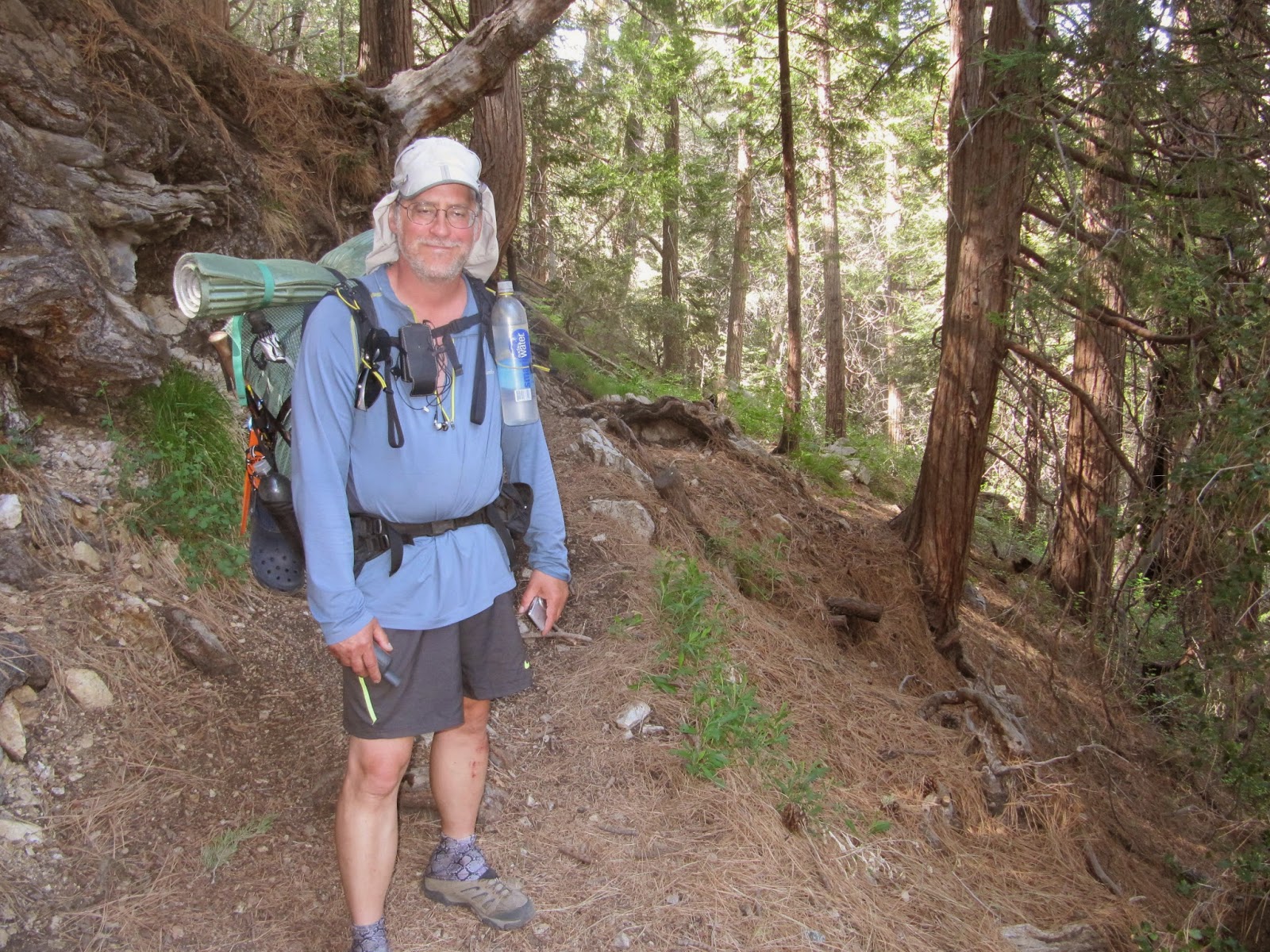 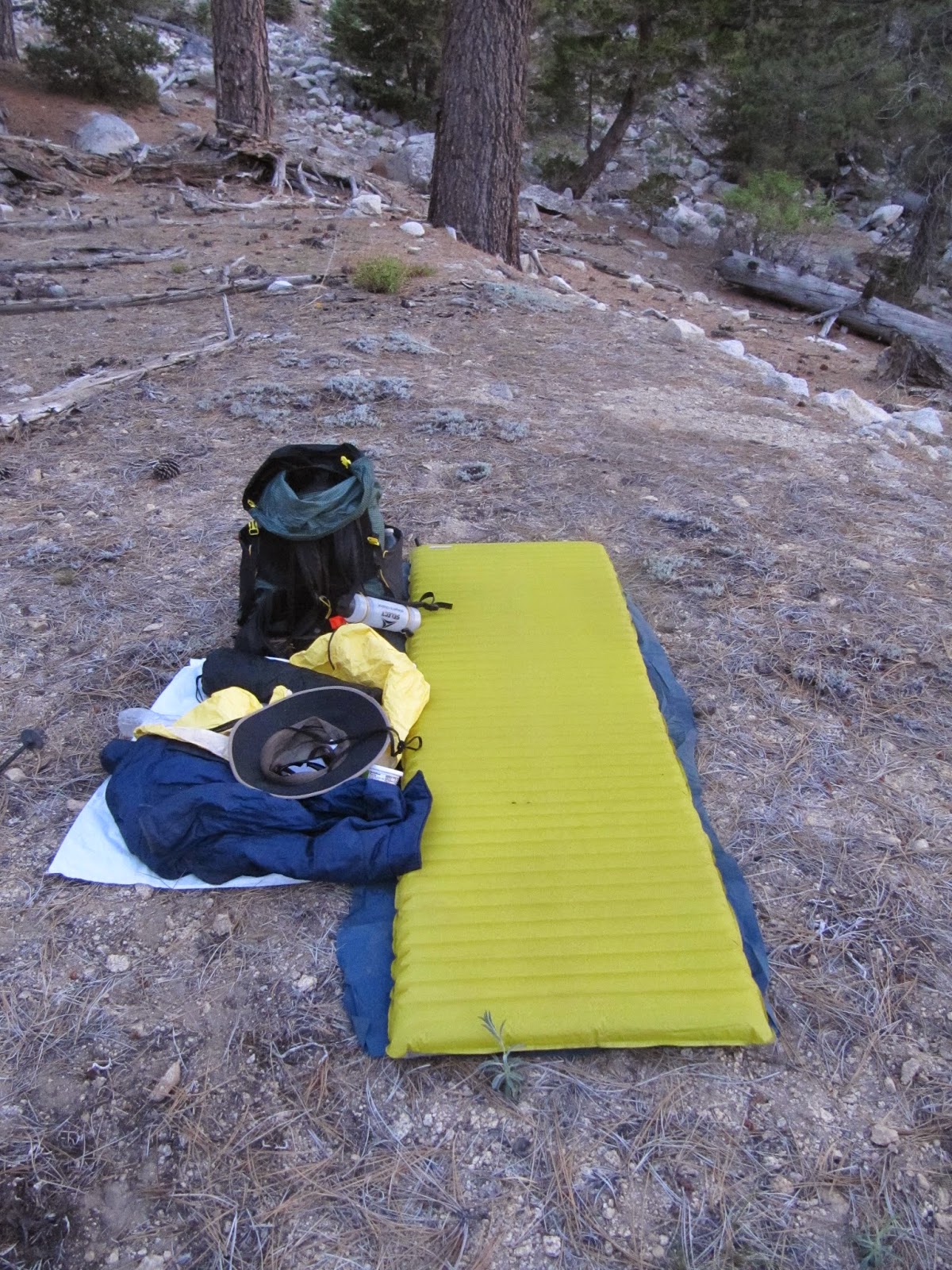