Across the street was the Campo Trading Post, a building built in 1918 by the Mountain Commercial Company.  I knew that if I lacked anything for the journey, there was a good possibility I could purchase it here.  Off to my left, as I looked towards the Mexican border, I saw a large sign that proclaimed the presence of the United States Border Patrol, a new facility built in 2008.

As I walked down the Forest Gate Road past the Border Patrol compound, I could see the old Camp Lockett buildings, now home to Rancho del Campo, a boys' ranch operated by San Diego County.

Continuing south, the pavement of Forest Gate Road soon turned to a dirt and gravel road, undulating through dry fields and ranch lands.  Within an hour, I was at the Southern Terminus of the Pacific Crest Trail.

The terminus itself is a grouping of five 12”x12” posts placed in the ground and painted battleship gray.  Each post has an inscription.  They read, “Southern Terminus Pacific Crest National Scenic Trail, Established by an act of Congress on October 2, 1968,” “Mexico to Canada – 2,627 miles,” “Elevation – 2,915 feet.”  The fourth and tallest post had a large PCT logo/insignia attached to its face, while the fifth post was blank.

Beyond the Terminus was the fence – the border fence, a fourteen-foot-high steel barrier designed and constructed for only one purpose – to prohibit unauthorized, undocumented, non-U.S. citizens from entering the United States of America.  At this particular locale, it stretched six miles to the east of Campo and six miles to the west, and was heavily patrolled by Border Patrol agents on four-wheelers who constantly scanned the dusty dirt of the graded road for footprints of illegals that had hoped the fence and were now headed north.

At night, these same Border Patrol agents employed night vision goggles to look for intruders.  By day and night, helicopters flew back and forth along the border scanning the terrain with heat-seeking devices that can hone in on the infrared heat of the human body as the intruder seeks to avoid detection by hiding in the dense foliage of the chaparral underbrush.  It’s tough to be an illegal these days.

It’s six in the evening, and I’m the only one at the Terminus.  I take a selfie with my cell phone, and then sign the trail register.  There were several entries for today’s date – April 23 – of hikers who had already signed in and moved on up the trail.  Two entries caught my attention, as they were signed with their trail names:  Cookie and Nurse Betty.

They were traveling together, and though only a few hours ahead of me, it would be nearly three hundred miles before I met them in person.  After my initial encounter with Nurse Betty, I wouldn't see her again for another twenty-three hundred miles. Cookie, on the other hand, was the one person, during the five-month journey, that I would consistently encounter as we leapfrogged along the trail.

Trail names are synonymous with nicknames, and are bestowed upon a hiker either because of a quirkiness of personality, or a circumstance observed by others.  Noah, for example, while standing in the dusty trail in Southern California, lamented that he hadn't seen any snakes, when at that moment, a large rattlesnake slithered past him and vanished into the undergrowth of the trail.  Those with him immediately dubbed him the Prophet.  Swiss Army acquired his name because of the numerous items he had hanging from his pack and shoulder straps.  Someone commented that he looked just like a Swiss Army Knife, and the name stuck.

As for myself, I took the name Rabbit Stick, after considering such names as I-70 and Tootsie Roll Papa.  Throughout the five-month journey, I constantly had to explain the meaning of my trail name. Rabbit Stick is the name of a wilderness program sponsored by the Boulder Outdoor Survival School, BOSS, located in Boulder, Utah. (Wescott)  It was also a tool used by the Anasazi Indians to throw at small game, much like a boomerang, except that a Rabbit Stick didn’t return to its owner.

It was time to get going; with a backward glance at the border fence, I shouldered my pack, took a swig of water from my shoulder-mounted water bottle, and took my first step towards Canada.  In a few weeks, I will celebrate my seventieth birthday on the trail.
Seventy years of age - how did I ever get here?  It was only yesterday that I graduated from high school, got married, and started my business.  Am I old?  I can't tell.  I don't feel old. If I were old, I wouldn't be attempting to walk 2,665 miles from to Canada?  Old people don’t do that.  None of my friends who are seventy would join me, so they must be old.  I take a senior discount at the movie theaters and restaurants, which places me in the senior category, but does that mean I'm old?  I feel eternally young, like I was when I was in my late twenties, early thirties; however, I recognize that I’m trapped inside a mortal body made of corruptible material that has a shelf life, and as I draw nearer to the expiration date of that shelf life, I can see that the seventy-year-old body is not like that of the thirty-year-old.  I operate with limitations.

Nevertheless, I know I’m young.  I can feel it, I can sense it; my intellect tells me I’m young.  When I look in the mirror, I try to find where the real me is located.  My body is not me; it’s only a representation of who I really am.  Me, as an identity, is not to the side of me, nor in front of me, nor behind me.  If, while looking in the mirror, I move my finger around the image in the mirror and try to point at where I am located, I always point to my head, actually to my brain.  Somewhere, deep in the recesses of my brain, is the intellect that is me and it resides in a spirit body that is eternally young.  When my physical body has reached its expiration date, I know that my intellect, which resides inside my spirit body, will separate from my earthly body and move on.  But that intellect and spiritual body are eternally young; therefore, I am young, regardless of the calendar years of my mortal body.

“Who am I," sings Jean Valjean with great emotion as he addresses his nemesis, Javert, in the musical Les Miserables.  At this point in my life, I, too, echo the same sentiments – Who am I?  I know where I've been and what I've accomplished, but in retrospect, my accomplishments were done as a much younger man.  I've never considered myself a senior, but maybe I am.  My hair is a little thinner these days, and it has a gray tint to it.  If I am a senior, is this the place for me to be?  Do I have what it takes to walk twenty miles a day, every day for five months, considering that I've never been much of a hiker?  Alone, in the wilderness, miles from civilization and help, if such is needed, is hardly the place to find out if I’m made of “the right stuff.” (Wolfe)

The accumulated elevation gain for the PCT is 498,418 feet, as calculated by Lon Cooper – trail name: Half Mile.  That, as pointed out by my friend and columnist, Lee Benson, for the Deseret News in Salt Lake City, is the equivalent of hiking from sea level to the top of Mount Everest an astounding seventeen times.  In my wildest dreams, I would never consider hiking to the top of Mount Everest – elevation 29,035 feet, even once, let alone repeating it sixteen times more.  And yet, I’m on the verge of doing just that.

At six feet four, 220 pounds, I'm in good health, with the exception of an AFib heart condition.  I’ve been active all my life, and have never been sidelined with a medical condition; however, AFib (Atrial fibrillation) may have set me back a little.  Atrial fibrillation is a condition where the heart either speeds up or beats in an erratic rhythm.  It’s not a fatal heart condition; one can live with it, but quality of life is significantly reduced, as the person is always fatigued and has little energy to be active.  Treatment for AFib is threefold:  medication to slow the heart rate, ablation, which is a surgical procedure, and Cardioversion, which uses electricity to stimulate a normal heart rhythm.

Cardioversion is less invasive.  In this procedure, a set of jumper cables are attached to a patient’s chest, with the other end attached to a giant truck battery.  The black (negative) cable is attached to the battery post.  Then the physician, who is watching a monitor, touches the red (positive) cable to the positive battery post at just the right moment in the cyclical rhythm of the heart.  The patient’s chest explodes upwards as the electrical current courses through the patient’s body.  Nurses and other attendants stand around the table to catch the body should it jump off the table.  Fortunately, the patient is sedated and has no idea what has just occurred to his body, and if all goes well, the heart stops and restarts itself in a normal rhythm.


In the years prior to hiking the Pacific Crest Trail, I’d had three ablations and five Cardioversion. There are side effects to ablation surgery, as I was to find out later, side effects that I don’t remember my cardiologist ever discussing with me.  Valves inside the heart chamber can be damaged, which leads to lung problems, which results in shortness of breath, lack of energy, and a persistent cough.

On the trail, I struggled up every foot of incline; I had to rest often, usually by bending over and resting my head on my trekking poles, or I would flop down in the dirt of the trail, and I coughed incessantly.  I suspect the valves in my heart have been damaged.

I have never sought out activities that were adventurous or dangerous just to add another notch to my belt for achieving a goal; rather, I have lived my life according to that in which I find an interest. Suffice it to say, my interests differed radically from those of my friends, associates, and family.  But, as I heard so often along the Pacific Crest Trail, HYOH, (Hike Your Own Hike), which translated means, I’ll hike the way I want to hike and you hike the way you want to hike.  Your way is not better than mine, so bug off. 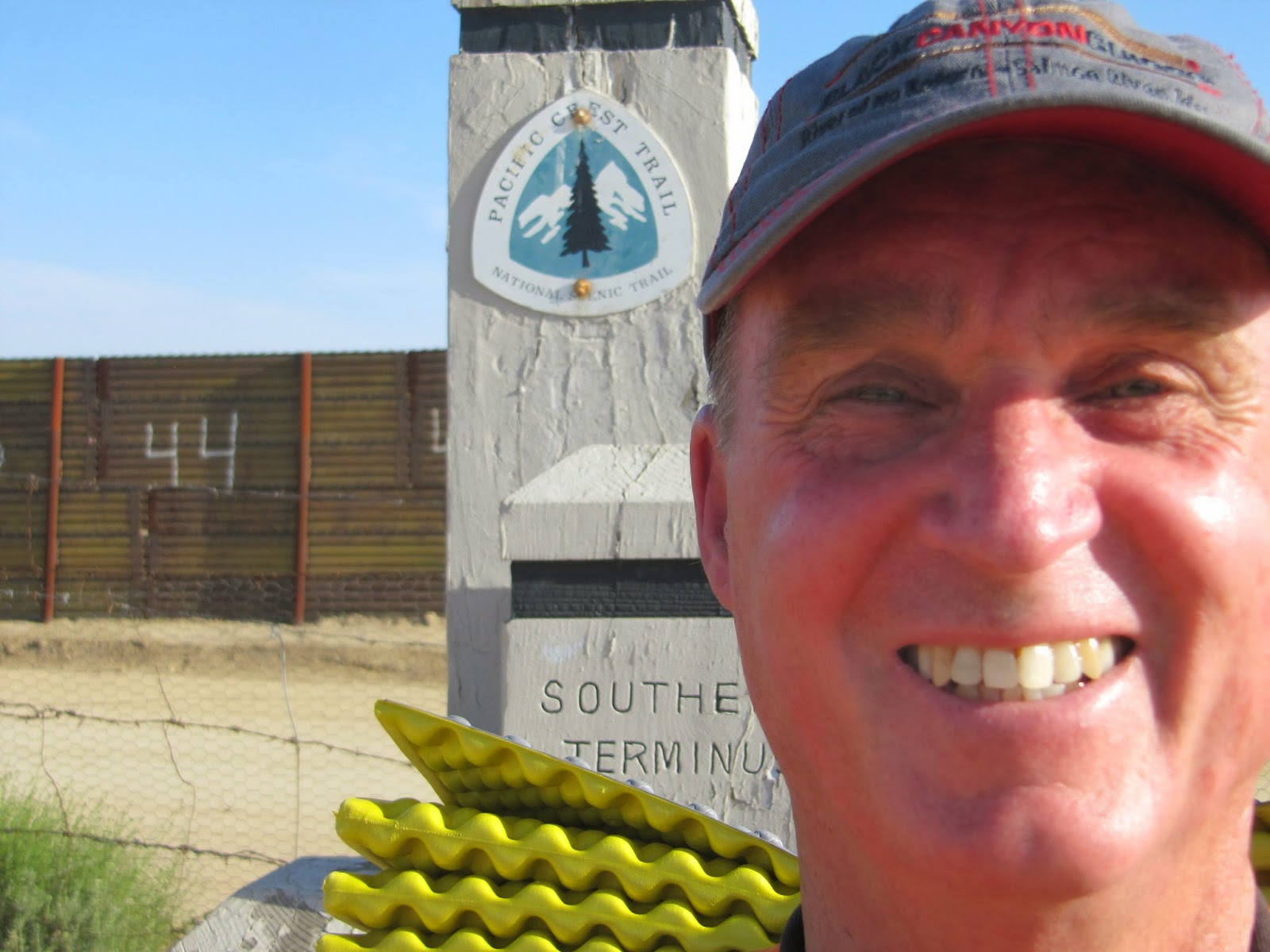 With no one else around, I had to take a selfie of myself to document that I had started the trail at the southern terminus.