Part 19 - Trolls Under the Bridge

The trail wound its way in and out of gullies and deep-cut ravines staying above Summit Valley, that showed on the maps to be a large backup reservoir for the Mojave River, should the river ever flood.  Presently, the valley supports cattle grazing and a few ranch houses.  The trail continued past the Oak Creek Dam, which impounded the warm waters of Silver Lake, which was part of the California Aqueduct System.

Approaching the dam, the trail crossed over a concrete bridge that spanned Oak Creek, and under the bridge, I found several hikers who had sought rest and shade from the afternoon sun.  I joined them, and took the time to have lunch
.
Under the bridge, sitting and resting like trolls, were Thirsty Boots, Kumquat, Tour Guide, Cookie, and Peter Pan.  There was not enough headroom to stand upright, so everyone had to hunch over to move about.  I had met the other hikers before, but Thirsty Boots was new to me.  He was a middle-age hiker – late fifties, and from other hikers I learned he had hiked the PCT at least twice before.  I liked him and wished I could have stayed up with him to visit and chat.

I had my usual sandwiches, coupled with a few cookies and dried fruit, while others pulled out their soda can stoves and heated water for Top Ramen.  Cookie and Peter Pan were waiting for their friend, Nurse Betty, to catch up with them.  In the distance, they can see her approaching the bridge, but she never dropped down the embankment to join them under the bridge. Apparently, she didn’t see us and proceeded across the bridge and up the trail
.
Leaving the shade of the bridge and moving forward, the trail was hot and dusty, with a lot of ups and downs and had someone asked me if I was having fun, I would have said, “No.”  It would have been like asking football players who do two-a-day practices in the hot sun if they were having fun.

I was approaching the I-15 freeway in Cajon Canyon and my planned rendezvous with my friends, the Cutlers, at the McDonald's Restaurant.  From high on the ridges, I could see the Interstate snaking its way west past Horse Thief Canyon, and then entering Cajon Pass which sat atop the San Andreas Fault.  There was a constant hum in the air from the sound of hundreds of rubber tires slapping the concrete pavement.  The trail dropped off the tortuous alluvial hills formed by sediment from the San Gabriel Mountains, and entered lovely Crowder Canyon dotted with willows and small pools of water.

These gravel hills, over which the trail now traversed and which were heavily incised and cut open, have an interesting bit of history that is worth recounting.  The hills are a matrix of sand, gravel, and small rocks of various diameters.  When a mountain begins to erode, the rubble that it sheds spreads out and becomes an alluvial fan at the base of the mountain and is sometimes referred to as foothills.  The source of the alluvial fan over which the trail crossed is the San Gabriel Mountains on the other side of Cajon Pass and I-15.  And while the source of the debris is the San Gabriels, the specific source lies farther to the west.  (Schaffer)

The I-15 Interstate, which connected Las Vegas, Victorville, San Bernardino, and Los Angeles, traveled down Cajon Canyon which was the precise location of the San Andreas Fault.  In times past, after the San Gabriels had shed a significant amount of depositional material, forming alluvium fans at their base, the fault line started to move.  This movement is easy to visualize if you place your hands/palms together, hold one hand still, and let the other hand slide back and forth across it.  The sliding hand represents a moving fault line.

When the San Andreas Fault line began to move, the land mass on the south side of Cajon Canyon containing part of the alluvial fan, was eventually displaced a few miles farther to the east.  Without a continuing source of material to replenish the displaced alluvial sediments, the once-gentle sloping alluvium fan has eroded into a series of razorback ridges.

After walking a mile in the narrow canyon, the canyon and the trail made a sudden turn, and bam; there I was watching eighteen-wheelers crawl along the freeway as they awaited their turn to enter the Cajon Truck Weigh Station.  At the bottom of Crowder Canyon was a small parking lot, and who should be parked there offering rides to McDonald's – trail magic himself – Aloha.  It was less than a quarter of a mile to the restaurant, but I accepted his offer of a ride. 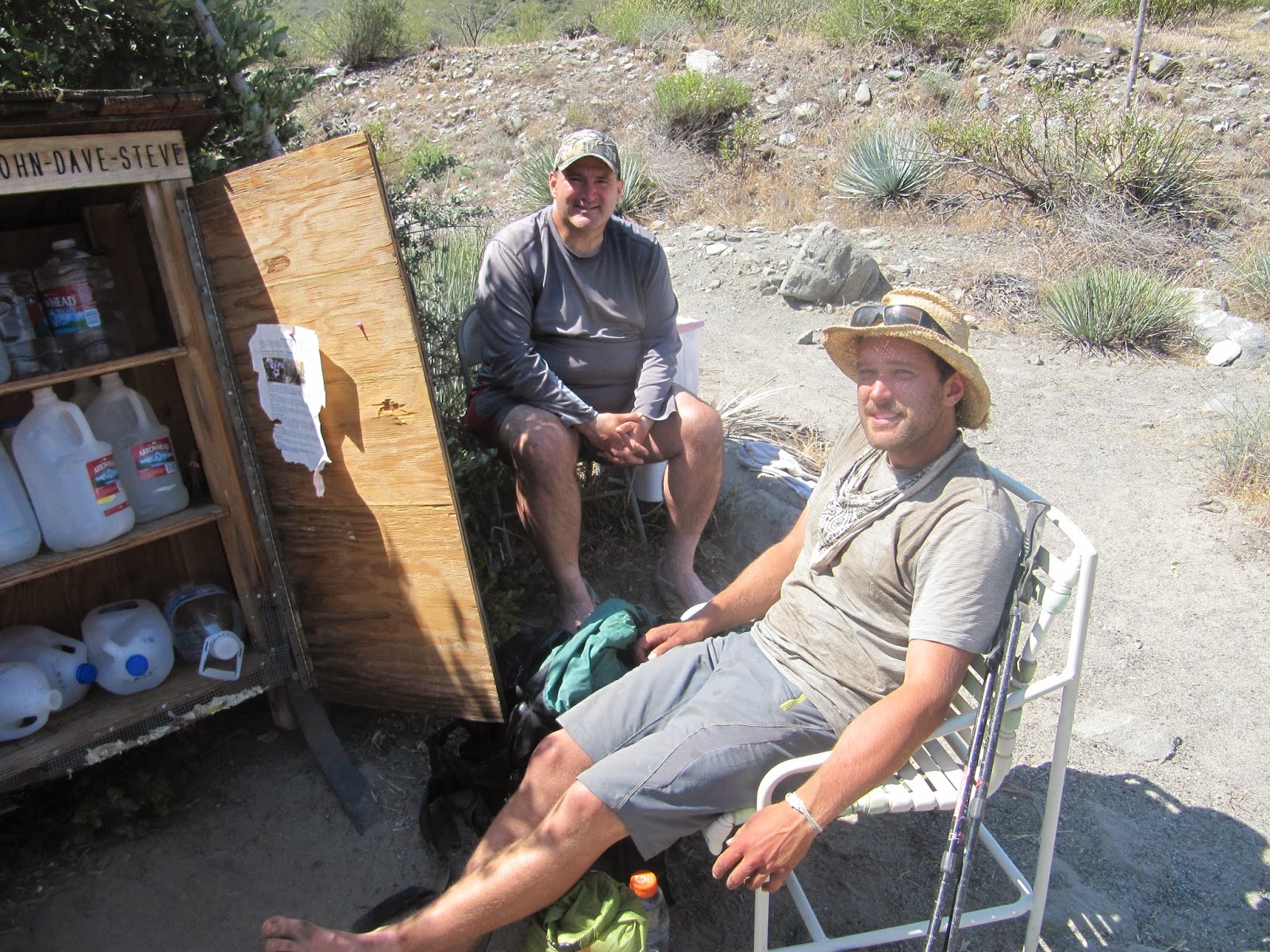 Atlas and Veggie resting for a bit at a water cache beyond Deep Creek. Veggie is determined to wear the same cotton T-shirt all the way to Canada. 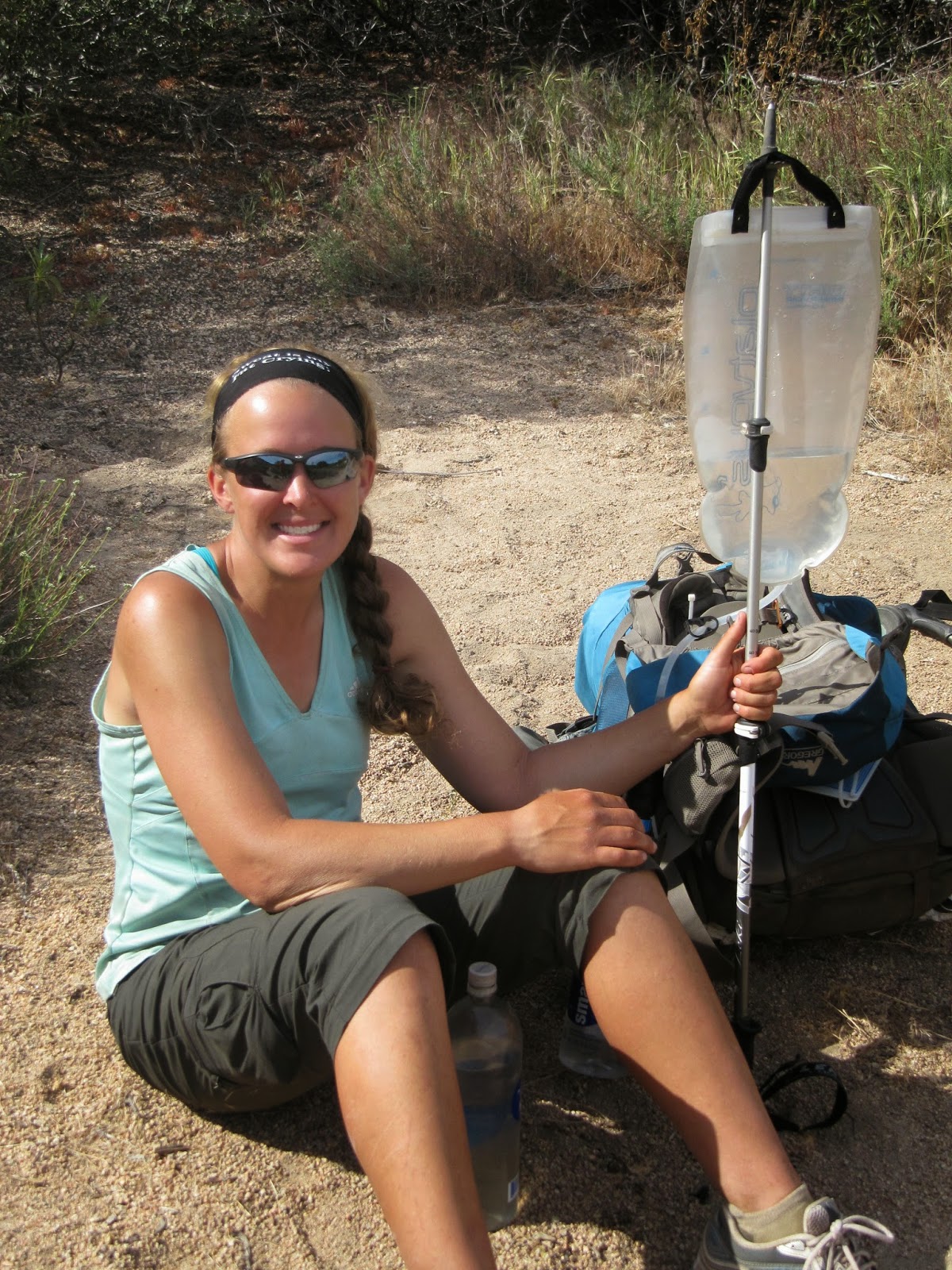 First time meeting Cookie. At the moment, she was hiking with Peter Pan and Nurse Betty. She's filtering water using a Sawyer filtering system. I grab my water, put a couple of drops of Bleach in the bottles and was on my way. 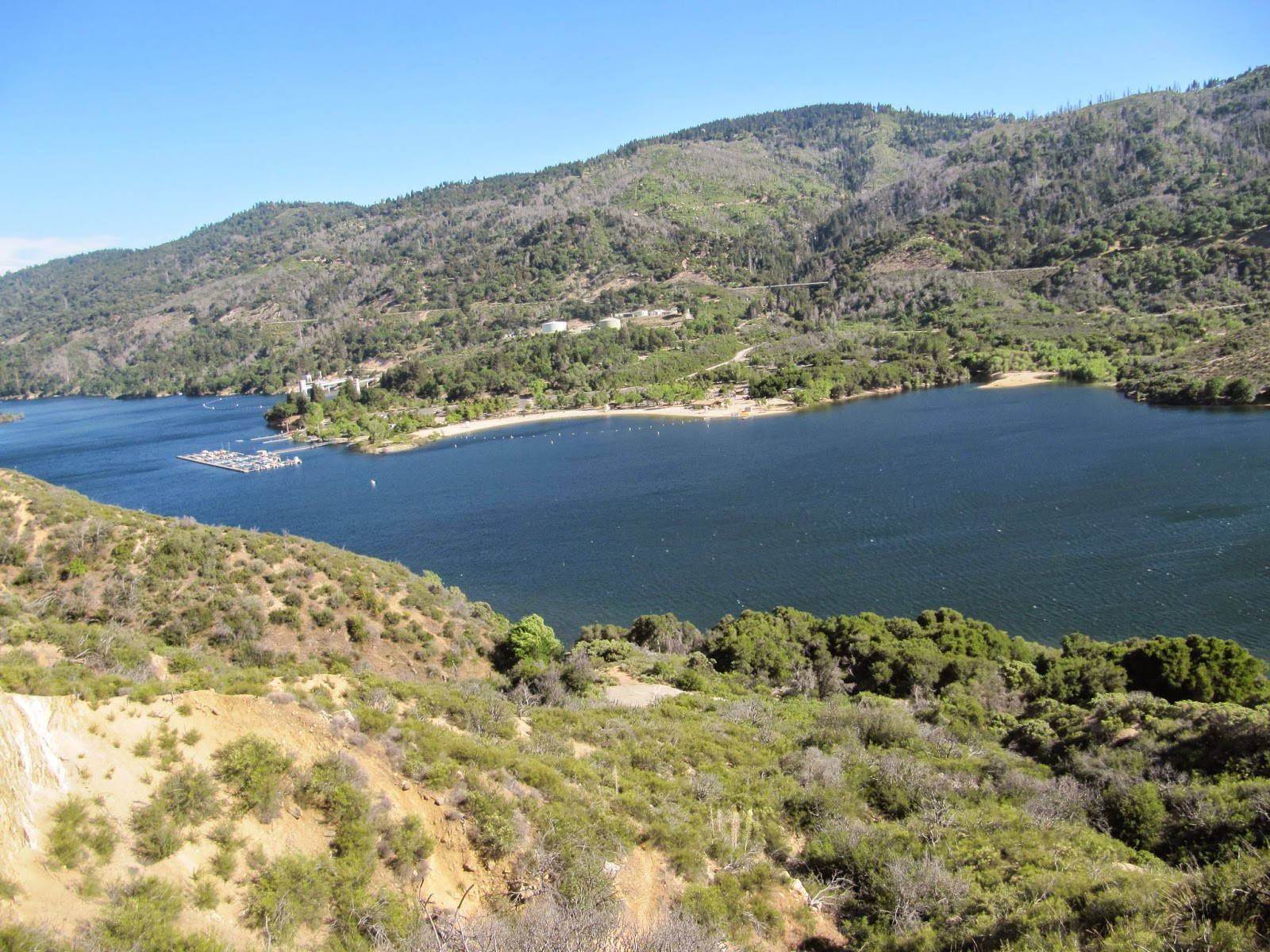 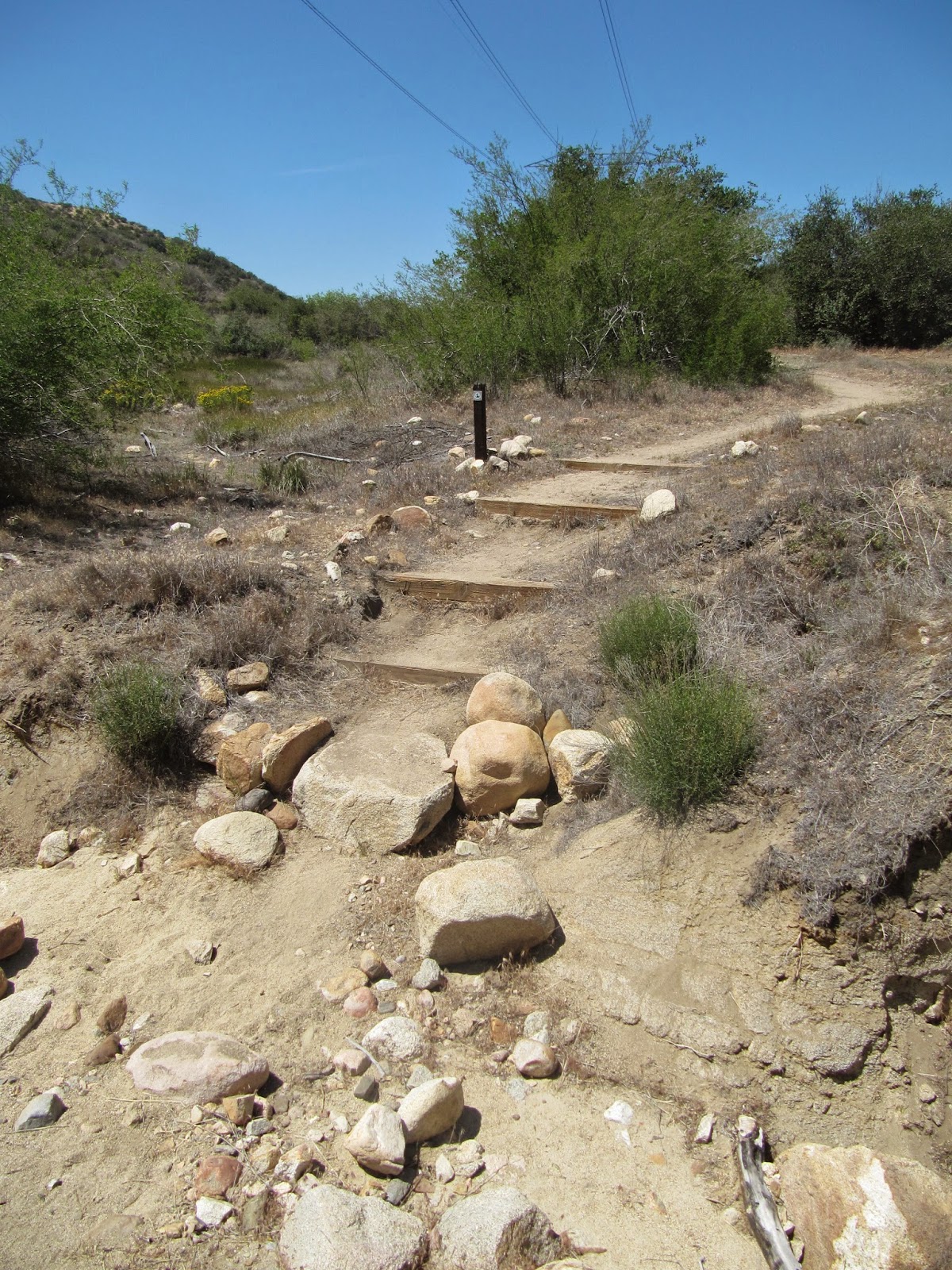 Part of the trail around the Oak Creek Reservoir. 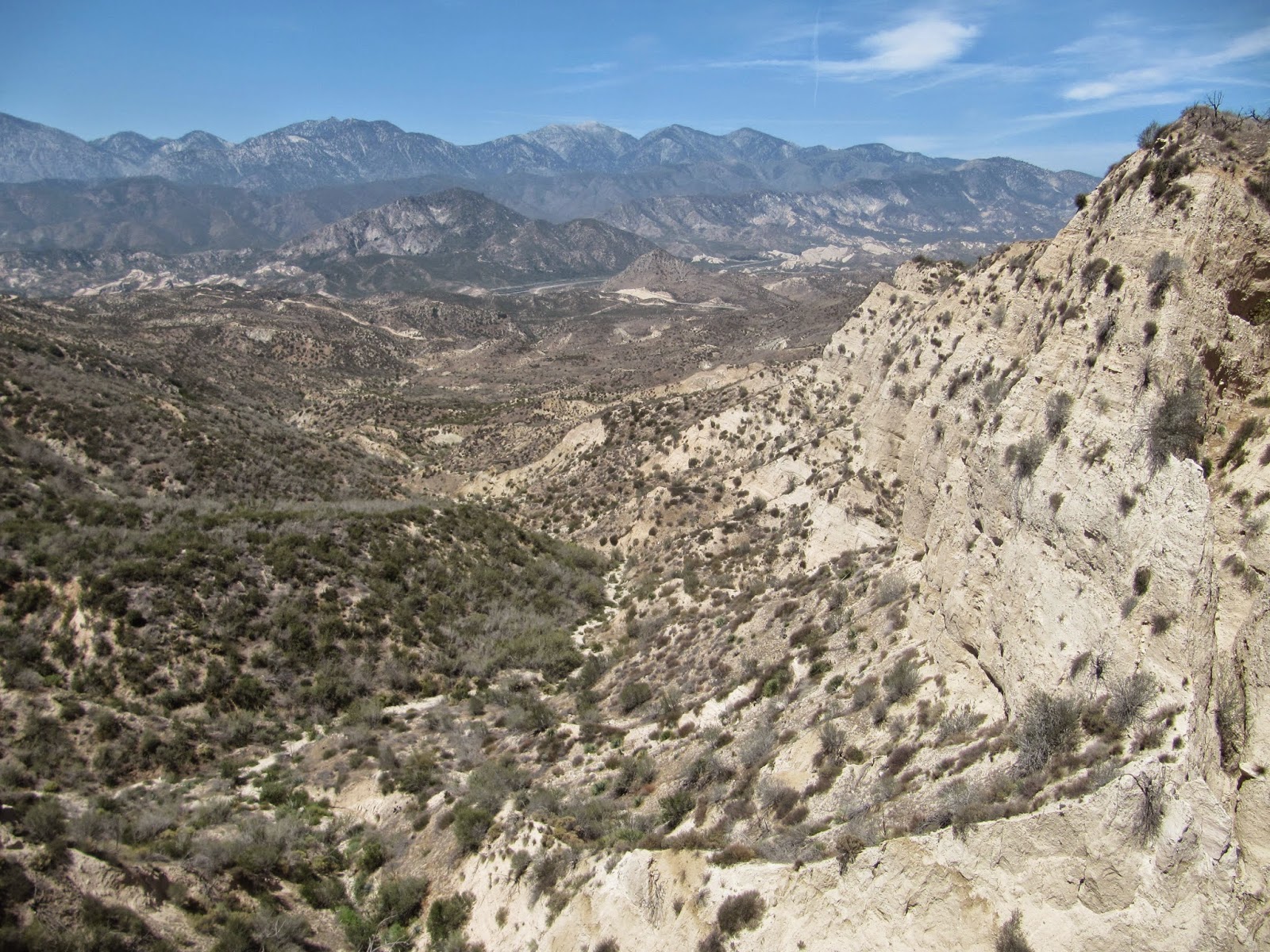 Heading north towards the San Gabriel Mountains, I-15 and McDonalds. 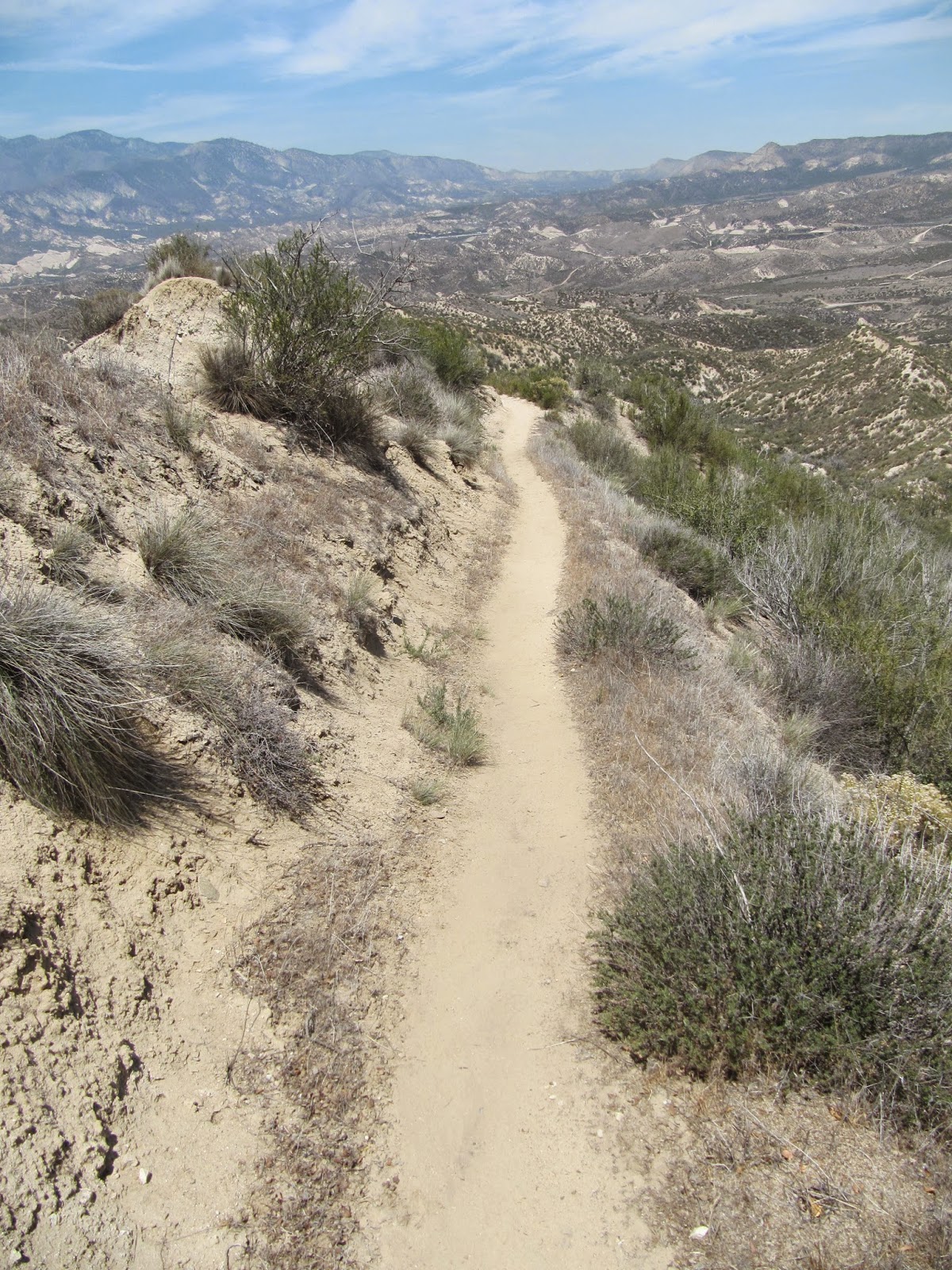 The trail through the desert is well worn, and at this point, it's all downhill to Interstate 15. 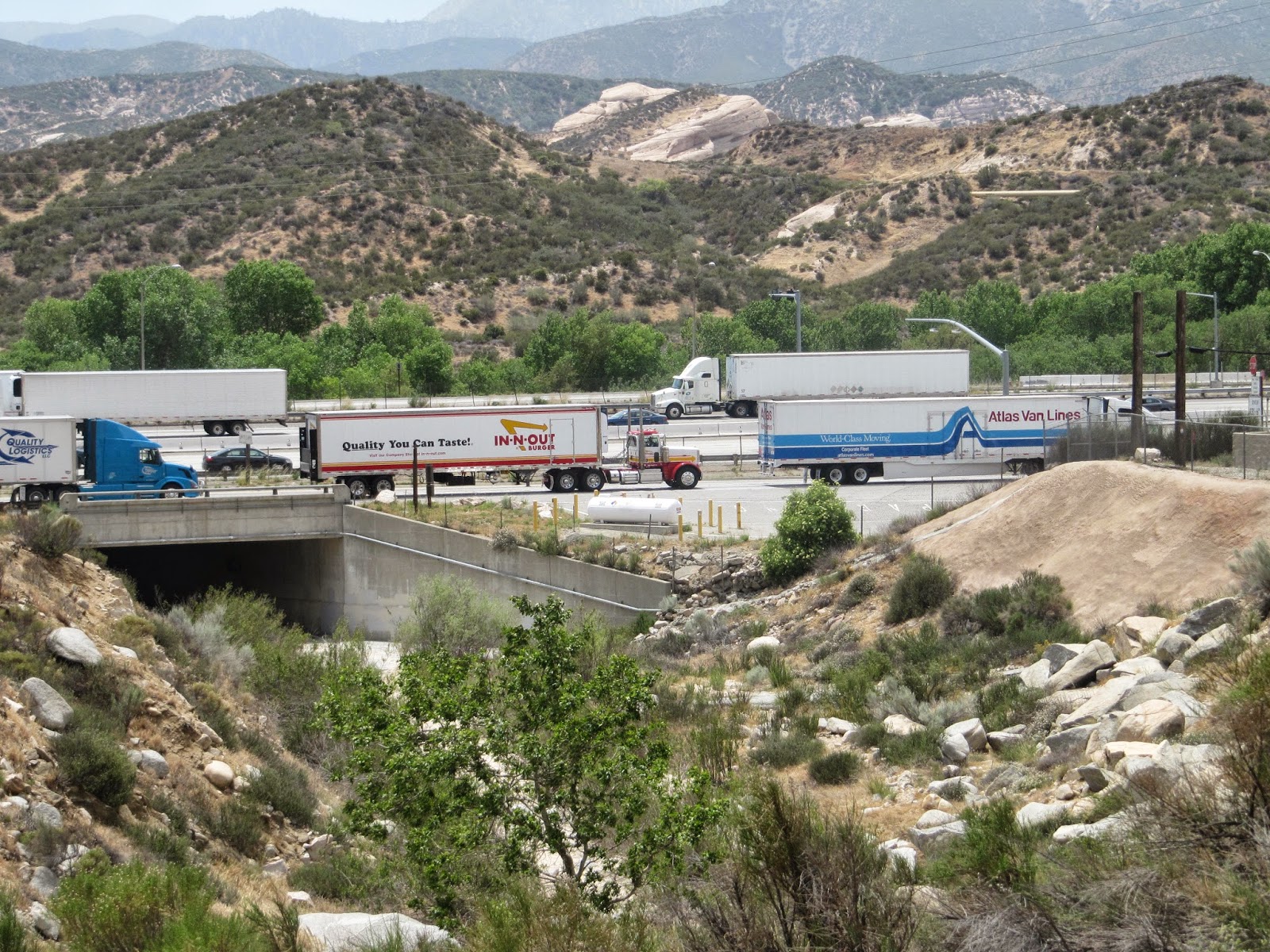 The hiker, who has been walking down a shady canyon, turns a corner and sees this: trucks lined up on I-15 waiting to go through the weigh station.