The bus was packed with hikers returning to the trail after spending a night in Stehekin, along with six tourists who were sightseeing.  I knew all the hikers and said “Hello” to each one as he/she filed off the bus.  As they were standing around, fiddling with their packs, getting ready to head up the trail, I proposed to them that we take some group pictures, as this would be the last time I will see any of them.  They agreed and I asked one of the tourists to take the pictures.  These resulting digital pictures are priceless, and are some of the best hiker photos I have of the entire trail.

The bus was ready to leave and I joined the tourists for the ride back into town.  One of the men, who was more talkative than the others, wanted to know if I was Rabbit Stick; when I answered, “Yes,” he extended his hand and said he was pleased to meet me, then turned to the others on the bus, and announced, “We found him.”

I was not sure of what to make of all this or what he was referring to, but then he added, “Your fame has preceded you.”  I was still baffled.

It turned out some of the other hikers on the bus had been talking about the seventy-year-old hiking the trail, who years earlier had rowed a boat across the Atlantic Ocean.  When they discovered this person was I, they wanted to talk, but I didn’t.  This type of conversation was always embarrassing, so I try to shut it down as quickly as possible.

En route to the small town of Stehekin and the boat landing at the upper end of Lake Chelan, about twelve miles away, the shuttle bus made the first of its four stops – the Stehekin Valley Ranch.  For hikers who desired to overnight in Stehekin, lodging can be expensive, but the Stehekin Valley Ranch generally has accommodations and was a delightful place to stay; subsequently, groups of hikers would often split the cost and share a room.  To my surprise, I found Brownie here.  He was among a number of guests getting on the bus for the ride to town.  He said he had spent the night here and was now taking the shuttle to the next stop – The Stehekin Valley Bakery, where he was going to hang out until the bus made the return trip at noon, when he would get back on and return to the trailhead.  I asked him how it was staying in the cabin with a bed, clean sheets, pillows, hot shower, and a dining hall with sumptuous meals provided; his basic response was, he didn’t want to torture me with the details.

The bus wound its way down the narrow valley, flanked on the right by the Stehekin River, and on the left by a high mountain, the tops of which could not be seen from the valley floor.  Scattered among the trees were cabins and homes, some of which were for permanent residents while others were intended for the thirty- to forty-thousand guests that visited Stehekin each summer.

The next stop was the Stehekin Bakery.  I didn’t know if it was because I had been on the trail for so long, that the mere thought of spending time in a bakery was so overwhelmingly appealing, or because the quality of the baked goods were heavenly beyond description; more than likely, it was both.

I had a hole burning in my pocket as I stepped off the bus.  I couldn’t wait to spend what cash I had left on whatever sweet, sticky items the bakery had in stock.  When it was my turn to stand in line, I simply couldn’t make up my mind what to order, when actually I wanted one of everything.  I think that was why Brownie had come back to the bakery.  I didn’t recognize a number of items, so I just started pointing, and telling the clerk I would take one of those, one of those, and one of those.  The items were expensive, as one would expect, inasmuch as all ingredients had to be brought in by boat, as there were no roads into Stehekin; however, the establishment could have charged a lot more for their pastry, and I would gladly have paid the price; I was ready for all things sweet.  I walked out with two sticky buns, a cinnamon roll, a couple of cookies, and a pint of milk.

Stehekin was an absolute place of beauty, serene and pristine and only wide enough to have one street going into town.  Actually, it was not even a town; it was just one large building at the end of the road – the North Cascade Lodge that began and ended at the waterfront where the boat dock was located.  The lodge hosted a restaurant, a small convenience store, and had a variety of room accommodations depending on the number of people in the party.  A hundred yards west of the lodge was the only other building in town – the post office, where hikers went to pick up their resupply packages.  There were not enough food supplies at the convenience store for hikers to resupply with, so everyone had a box waiting for them at the post office.

Across the street from the lodge entrance was the boat dock for boats and seaplanes, which was the only way to access this precious jewel of a community at the western end of fifty-mile-long Lake Chelan.  I was so impressed with the area that I would definitely return for a visit.

While packing the contents of my resupply box into my backpack, waiting for my sleeping bag to dry, and washing out my socks in the bathroom sink of the lodge’s public restroom, I missed the noon shuttle heading back to High Bridge and the start of the trail, but I did make the two o’clock shuttle, which again stopped at the bakery.  The shuttle driver didn’t stay long, but I rushed in quickly and made additional purchases; all total on my two visits to the bakery, I spent twenty-eight dollars, and would have spent more for later consumption on the trail, if I had had room in my backpack.

The bus was full as we departed from the boat dock adjacent to the lodge, but only four of us would be going all the way to High Bridge at the end of the road; the other passengers got off at the Stehekin Valley Ranch, where they had overnight accommodations.  Besides trail hiker Joker (not his real trail name), and myself, there were two brothers on the bus who were on a quest to hike to the top of nearby McGregor Mountain where their father, years before, had been employed as a fire watch lookout.

As the bus passed the post office in town, it slowed down a bit, as there was rock and rubble debris next to the road, and men with excavating equipment were standing off to one side of the road conferring with each other, and occasionally casting glances in our direction.  The object of their inquisitive eyes were the remains of a massive landslide that roared down a small creek several weeks ago (September 5, 2013), destroying a number of cars parked in a public parking lot and wreaking havoc with the only through street in town.  Park Service personnel, along with contracted workers, were still working at cleaning up the mess and extracting the vehicles still buried under the mud and rubble.  Just poking through the blackish mud and broken rocks were the remains of an ancient SUV, probably an early Dodge Caravan.

Before Joker set out on the trail, which continued its way up the mountain behind the restored Park Service horse corral, he took the buds from his iPod and inserted them into his ears.  It was the largest iPod I had ever seen and I was intrigued by it, but before I could ask questions, Joker started up the trail and was quickly out of sight.

It was late afternoon now, and I knew I would not be going far up the trail.  My maps indicated there were two camps to choose from – one in five miles and the other within eight miles.  I told myself I would make the decision of where to camp when I reached the first one, and could better gauge the time. 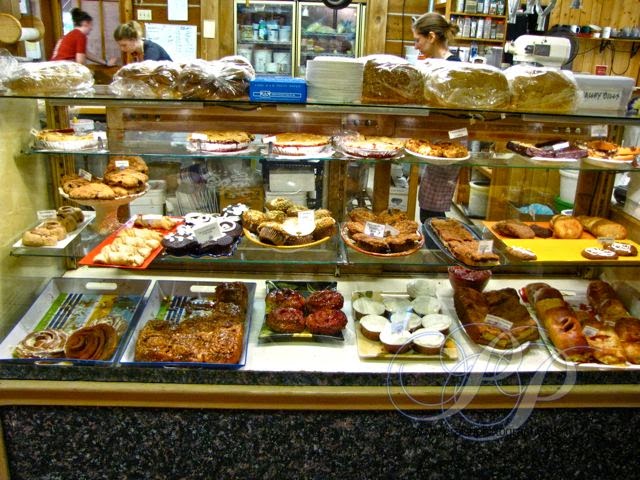 By the time a hiker, who has already hiked 2,500 miles reaches the Stehekin Bakery, all reasonable expectations of what he/she might find are completely blown out of proportion. The bakery becomes the holy shrine for which the long pilgrimage has been made. Had I had the money and the time to enjoy my purchases,  I would have bought one of each, and not faulted myself for my weakness. My rational would be that this was going to be a once in a life time experience and I wanted to make the most of it. 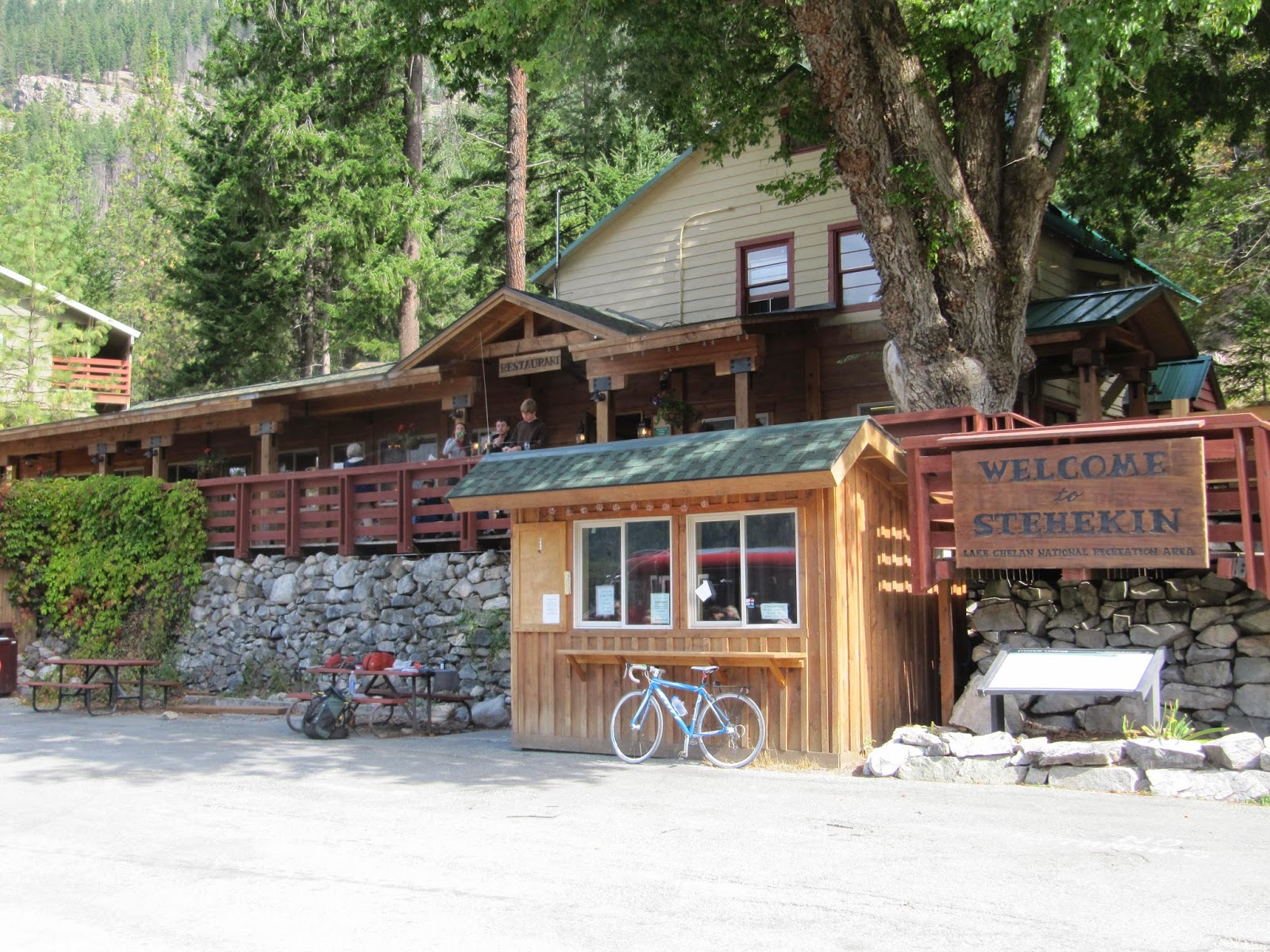 Behind me, as I take this photo is the boat dock and Lake Chelan. In the photo is the main building that constitutes Stehekin - The Stehekin Inn, cafe and store. 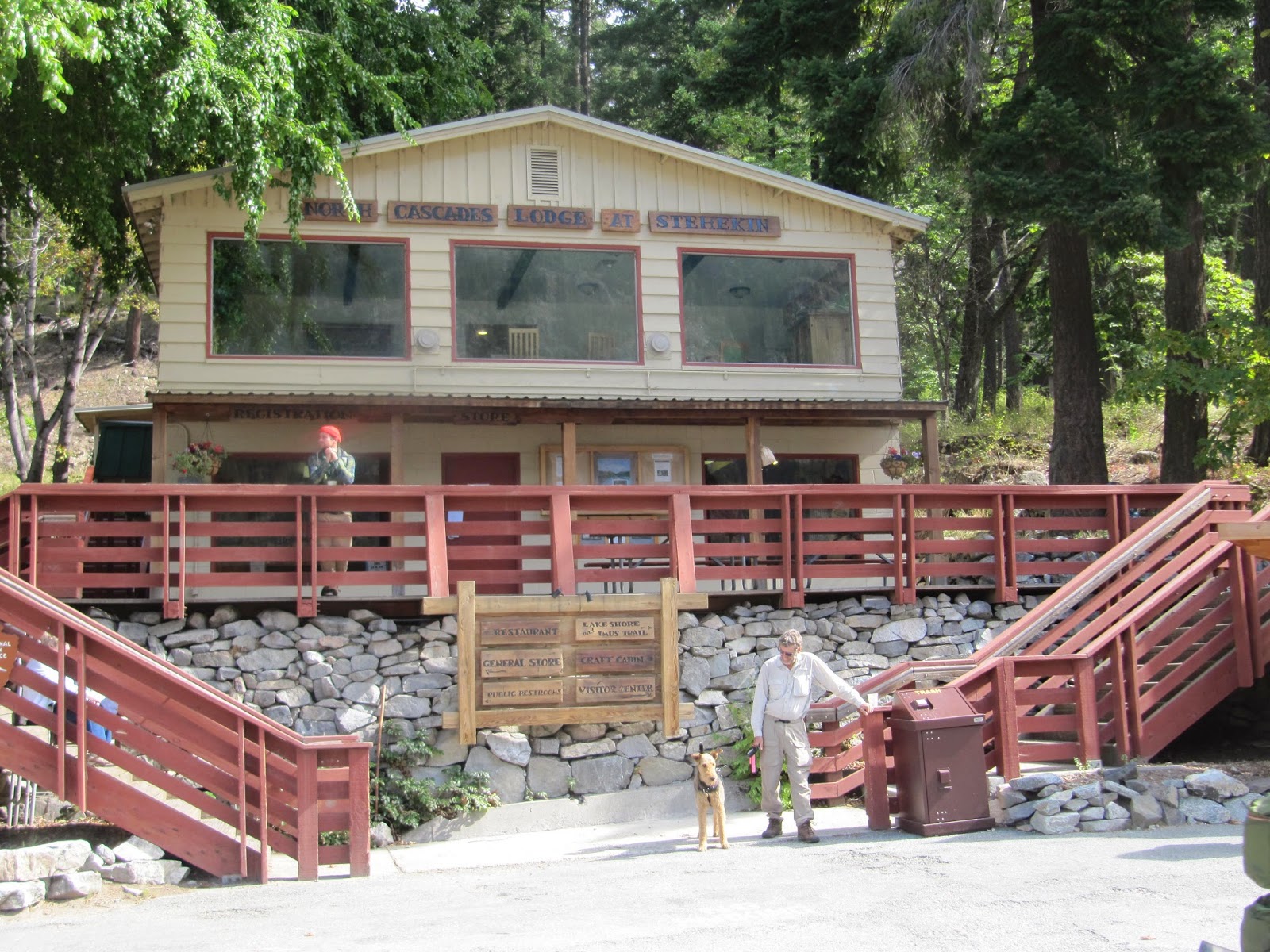 Another shot of the same building. 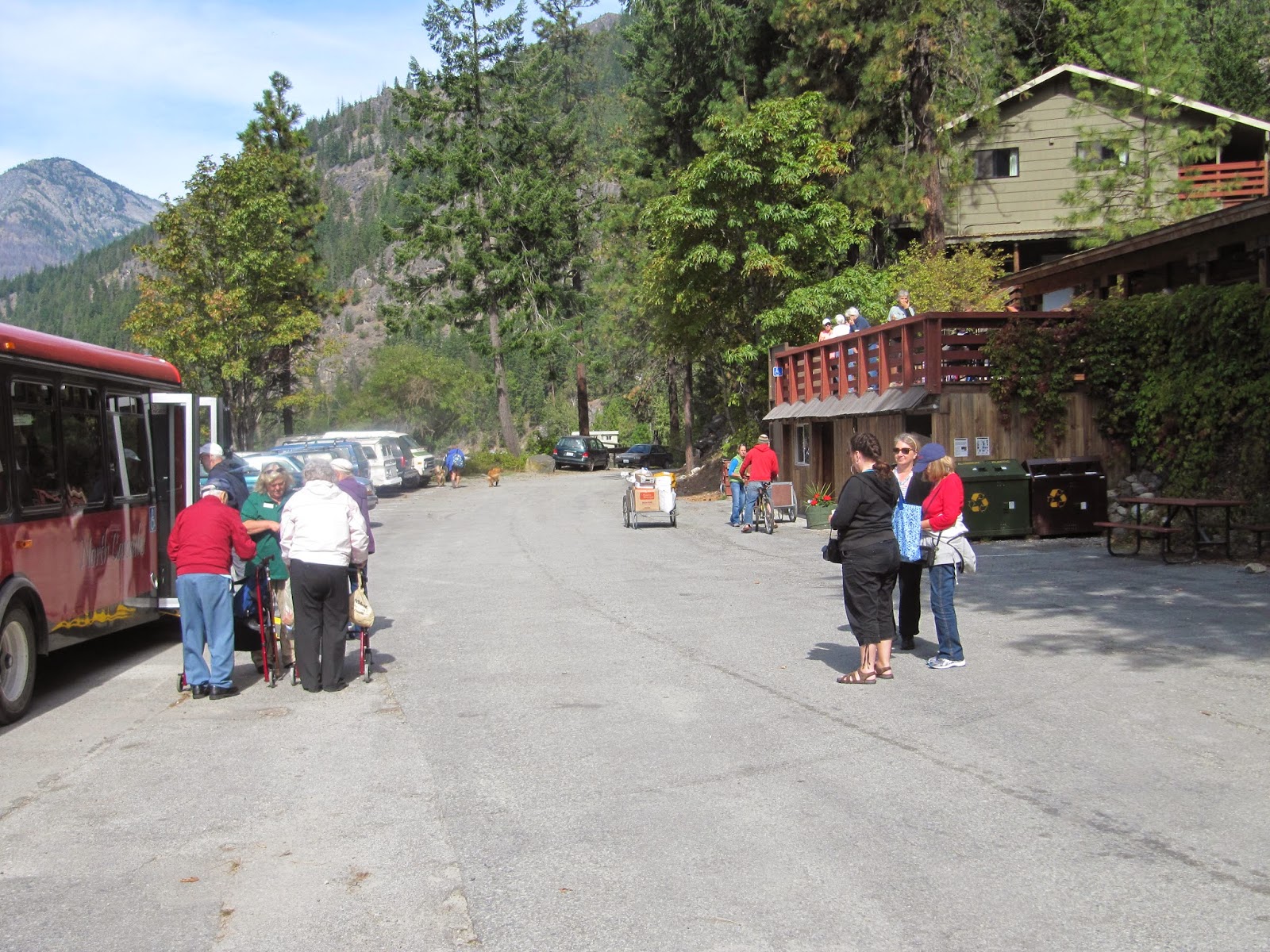 In Stehekin, there is only one major street and this is it. The NPS shuttle bus, seen here loading passengers, will shortly depart for the Stehekin Bakery and the High Bridge turn around.