Just beyond Lake Susan Jane, the trail swung to the west and came close to Cowboy Mountain.  I could see the top of the mountain less than a half mile away and was reminded of the events of that fateful Sunday afternoon that left many people in mourning for their fallen comrades.

Once over the summit, the trail made a series of switchbacks down the mountain to the main parking lot of the Stevens Pass Ski Resort; traffic from Highway 2 raced past the facilities of the resort, and on the other side of the highway was another large parking lot, with an overhead walkway that connected the two.

The only way to get to Baring and Dinsmore’s Hiker Haven was to hitchhike.  I crossed the walkway, descended the stairs, and stood beside the highway adjacent to the parking lot, stuck my thumb out, and waited patiently for a good-hearted Samaritan to feel sorry for me
.
Cars were scarce on the highway and what traffic there was came barreling up the summit at sixty-plus miles per hour, then quickly descended down the other side; stopping for a hitchhiker would interrupt their train of thought as well as the smooth flow of their vehicle. Nevertheless, as each car passed, I tried to gain eye contact with the driver to make him/her feel guilty as sin for leaving me stranded on the highway, as well as telepathically pleading my case to the driver as to why I should be picked up.  Eventually, an employee from Stevens Pass Resort, who drove across the highway from the other parking lot, pulled up in front of me and offered me a ride.

I told him that Baring was my ultimate destination, but that I would like to stop in Skykomish at the café, to partake of a meal, and of course, the all-important chocolate milk shake.  The young driver, who was in his midtwenties, said his girlfriend worked at the café, and he would introduce me to her.

Skykomish was only a block off the man highway, lying alongside the Skykomish River. We passed an old hotel that was being renovated; its origins dated back to the beginning of the town which was 1909, and from the looks of it, it must have been glorious in its heyday; now, it looked like a money pit.

Surprisingly, the main street looked new, as did many of the buildings on the street; there was a small park on the opposite side of Main Street that in turn faced a plethora of railroad tracks.  The town had the smell and look of a railroad town; in fact, the town owed its existence to the railroad, for it was here, beginning in the early nineteen hundreds that this wide spot in the canyon became a maintenance and fueling station for the Great Northern Railroad – known today as the Burlington Northern Santa Fe Railroad.  During the period from 1890 to1974 when maintenance was performed on the locomotives, invariably diesel fuel and other lubricant oils spilled onto the ground, and were never cleaned up.

Over time, this practice took its toll on the environment; the soil, as well as the groundwater, became contaminated.  The oil in the ground began migrating towards the river causing an environmental disaster.  In 2004, the railroad, along with the EPA, began a cleanup of the area surrounding the maintenance yard and the town itself, which resulted in a massive excavation of the soil from the rail yard and underneath the homes and businesses, all the way to the river’s edge.

Homes and businesses were lifted up and the contaminated soil underneath them removed and replaced with new soil.  In some cases, buildings were moved to new locations; all these efforts resulted in a rejuvenation of Main Street and the buildings fronting it. (BNSF)

We pulled up in front of the Cascadia Inn, a combination café and hotel that was a definite throwback to a time when frontier town motels were small, with small hallways and shared bathrooms.  The owner was friendly and attentive to the needs of the loyal clientele that stopped often at this quaint establishment that seemed to be more hostel than hotel.

Together, the driver and I entered the café, where he inquired about his girlfriend, however, she’s not there; it was her day off.  I thanked the driver for his generosity in giving me a ride, and bid him farewell.

Although other patrons came into the café, at the moment, I was the only one in the small dining room that at maximum could seat twenty-five people.  I ordered the house special, which was a large, juicy hamburger and the biggest chocolate milk shake the waitress could conjure up. While I waited, I browsed through a house copy of the town’s history and its association with the railroad.  Many of the accounts were written by residents or former residents who had gone to school in the town, and it was fascinating reading as the contributors recounted what it was like growing up in a small railroad town that was now more museum than thriving community. 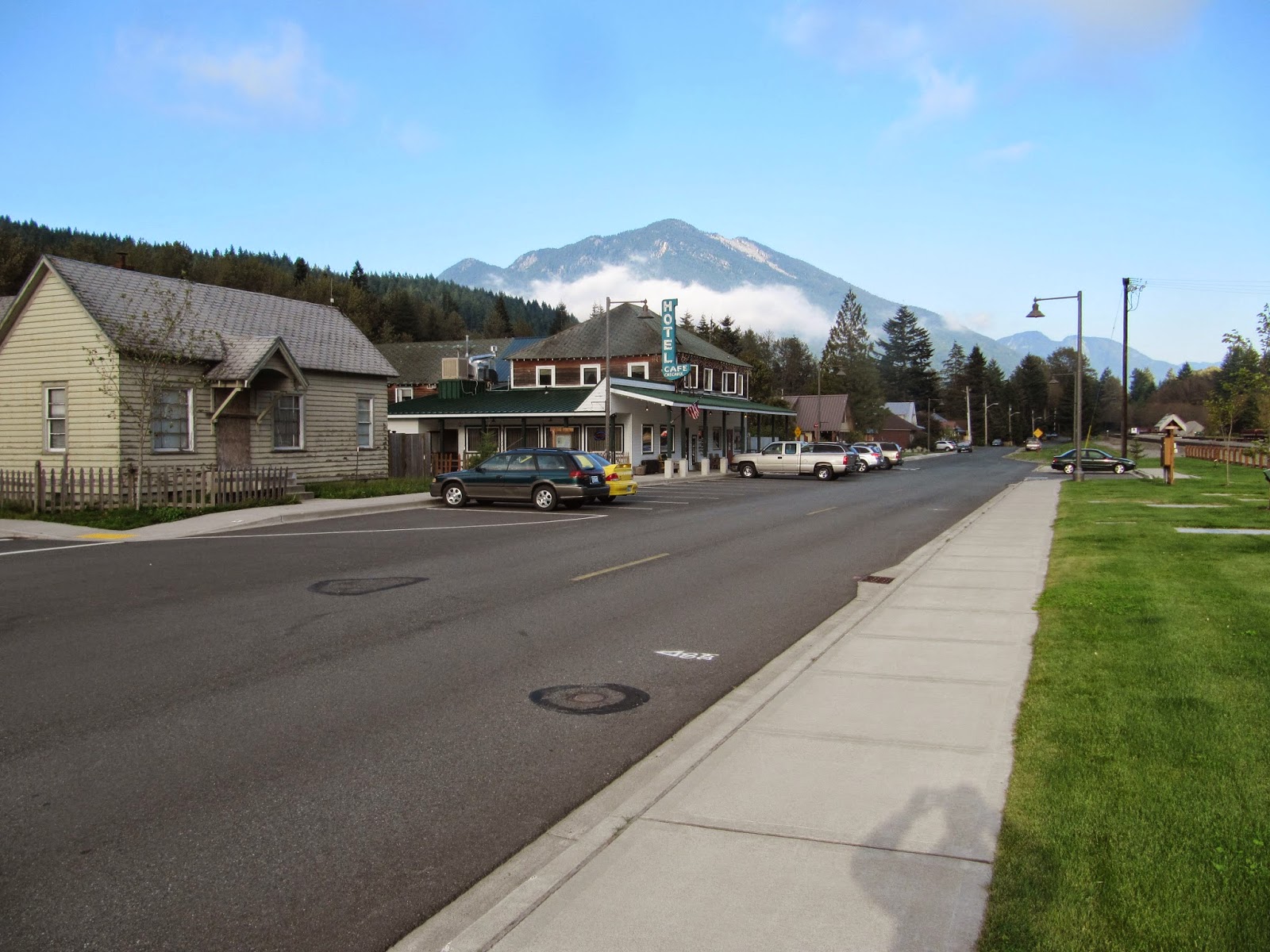 The main street in Skykomish. Because of the EPA cleanup, everything appears new. 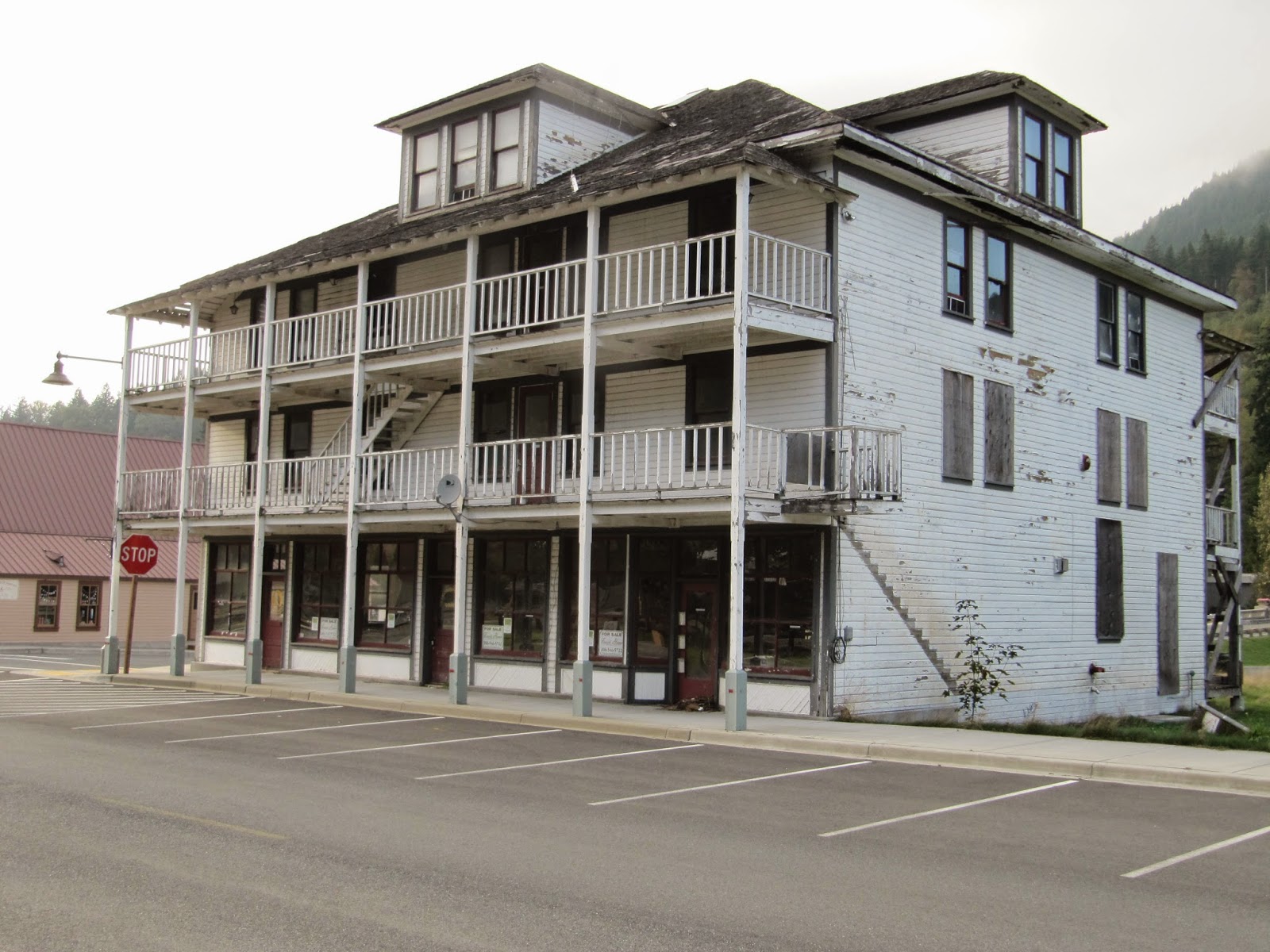 A turn of the century hotel. As I walked around the structure, it looks like it's in the process of being renovated.