Now came, what for me was the fitting climax to the end of a very long and adventurous trail, the climb up Woody Pass.  To my left was Powder Mountain, a massive black mountain with spiraling crags, and to my right was Three Fools Peak, equally menacing looking.  As I stood at the base of the pass at a trail junction with an older section of the PCT, feet frozen, hands stiff with cold, I hardly dared to think that the trail was actually going to switchback up this gnarly, steep incline.  OTC was way out in front of me, and if I hadn’t seen his footprints in the snow in front of me, I would have had a hard time knowing that the trail I was on was really the PCT.

The bleak mountains covered in snow and ice were intimidating and it was unsettling being out here all alone; I knew from reading the journals of other hikers who had passed this way, that many have experienced the same feelings
.
I began the climb, slowly placing one foot in front of the other, trying to follow OTC’s footprints in the snow; I counted to eight and started over again, and I kept doing this as it gave me visual confirmation that I was making progress up the pass.  Unbeknownst to me, this climb to the top of Woody Pass would be the last elevation climb I will make on the PCT (with the exception of a few additional feet leading to the Devil’s Staircase).  It would be the last of the 489,418 feet of elevation gain I will have accumulated on this five-month journey.

The higher I climbed, the deeper the snow became and when I finally reached the summit, dark, menacing clouds shrouded the pass; OTC's footprints all but disappeared in this swirling mixture of snow, fog, ice and sleet, and for a few moments, it became a guessing game as to the correct direction of travel.  As I moved forward, the swirling clouds begin to lift, and I could see that to my left, it was a virtual drop-off to the valley floor several thousand feet below.

Ahead was another small climb; the clouds moved back in, and I had absolutely no idea where I was, or where the trail was leading me. And then suddenly, there was OTC standing in the middle of the trail, tri-pod extended, and he was squinting through the viewfinder in an effort to compose just the right picture of the snow-covered mountains across the deep valley.  After he captured his picture, I told him that even if he didn’t have any Viking heritage in his ancestral line, he could certainly pass for one.  This made him chuckle and he said he agreed.

We were both on the downhill side of Woody Pass now, and in truth, it was downhill all the way to the Canadian border.  The snow was about a foot deep on the summit as we began our descent down the Devil’s Staircase, a descent of several hundred feet via switchbacks.  The descent was treacherous, as the rocks were snow and ice covered.  One slip, one fall, could do a lot of damage.

Standing on a ridge overlooking the land below us, Hopkins Lake sparkled like a diamond in a jeweled setting.  The lake, at the moment, was jade green in color, but the color periodically changed according to the fluctuating mood of the overcast sky; it was surrounded by a mantle of glistening white, dotted with green pine trees that had thrust their way skyward through the blanket of snow.  OTC lingered on the ridgeline to take a picture of the lake, and then said that we should camp in the trees at the water’s edge.

Cautiously, we made our way down the steep trail until we encountered the spur trail that headed off to the lake.  OTC led, and I followed.  From the crust on the snow, it didn’t look like there had been other hikers here in the last few days; I knew I wouldn’t have camped here if it hadn’t been for OTC’s suggestion to do so.

It was a good camp, and I was glad we stayed; we found flat ground under the trees that was free of snow and ice, and within a half hour, we had our tents set up.  OTC had a Jetboil stove, and had water boiling for his meal in just a few minutes.  He called to me, and asked if I would like some hot water for whatever I was cooking for the evening.  I got hot water for my Idahoan Instant Potatoes, as well as hot chocolate that Craig (OTC’s real name) provided.  I told him that this was the first hot chocolate I had had on the entire trail, and it never tasted better.

For my last night on the trail, I once again sleep in all my clothes, including my rain gear, and still, I spent the night rubbing arms, torso, and thighs trying to get warm enough to go back to sleep.
I wish I could say this was an emotional night for me, it being my last one on the trail, but it wasn’t; it was a lot like the last 150 nights, except that right now, I was just concerned about staying warm.

Tomorrow I would be with family and friends and two days hence, I would be home, catching up on five months' worth of honey do's.  I would pick up right where I left off last April; I know the garage needed a new roof; Jodie says the garbage disposal is making awful grinding noises, and as always, the infernal sprinkling system will need attention.
But there is something that is different now; something I didn’t experience during my five-month voyage across the Atlantic Ocean.  Now, I have a connection with every place I have visited on the trail, every hiker and trail angel that has crossed my path, every vista and horizon that came into view; and what’s more astonishing, I can associate feelings and emotions with each of these places, with each talented individual with an enduring trail name, and each event that makes up the totality of the hike along the Pacific Crest Trail.

I have almost total recall of every incident, every person encountered, every section of trail hiked, every storm weathered, and everything is imbued, surrounded and imbedded with an appropriate emotion, a feeling, a passion, or sensation, or a combination of all; the trail has become a perfect symphony of the things, places, and events encountered; it’s been a perfect blending of the great and spectacular scenes like Forester Pass, Goat Rocks, Glacier Peak, and North Cascade snowstorms, coupled with the smaller details like Third Gate water source, bear lockers at Crabtree Meadows, Tunnel waterfall, ants that rule the world, huckleberries, Andrea Dinsmore, Stehekin Bakery, and trail closures across federal land.  It’s like having a continuous telegraph wire that connects me with all of these places, beginning at the rusty barbed wire fence in Campo, and ending with a few wraps of wire around the base of Monument 78 at the Canadian border. (Gray, p.184)

At any time, at any place, under any circumstance, I can tap into one of these memories and be entertained for hours, which, undoubtedly, is what I’ll do during my twilight years.  If someone should see me on my porch in my rocking chair, staring into space at no place in particular, you can be rest assured I’m reliving the glory days of hiking the Pacific Crest Trail with friends with such funny-sounding names as OTC, Swiss Army, Prophet, Commando, Cookie, Peter Pan, and Nurse Betty. 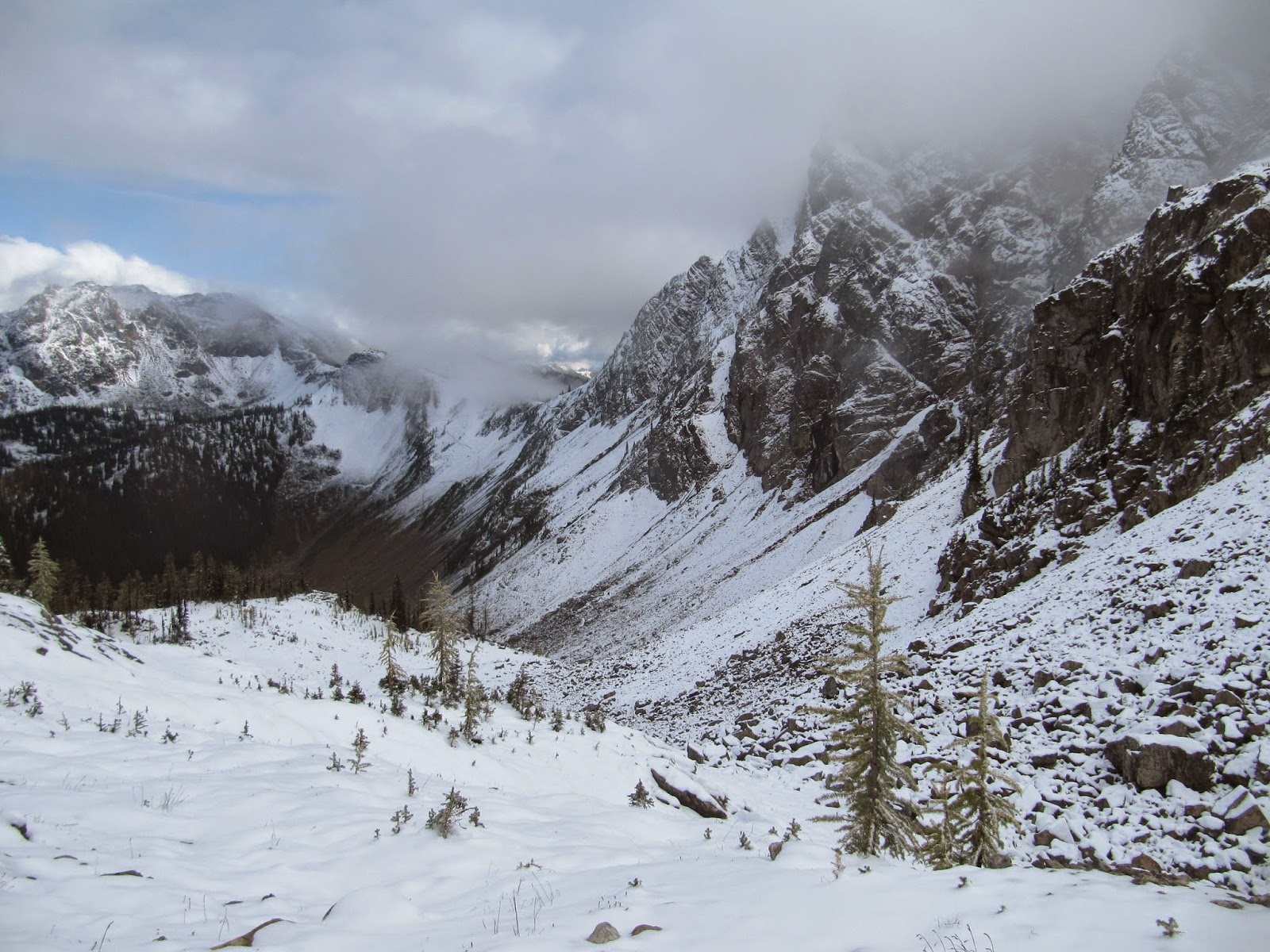 This is the reality of the North Cascade Mountains on September 24, 2013.  This is the reason I felt compelled to keep moving forward, rather than take time off in trail towns. Forty eight hours later, a massive winter storm coming off the Pacific Ocean dumped four plus feet of snow, over the entire mountain range, effectively shutting down the trail for the winter. There were many behind me who had to abandon their attempt to finish the trail this year. 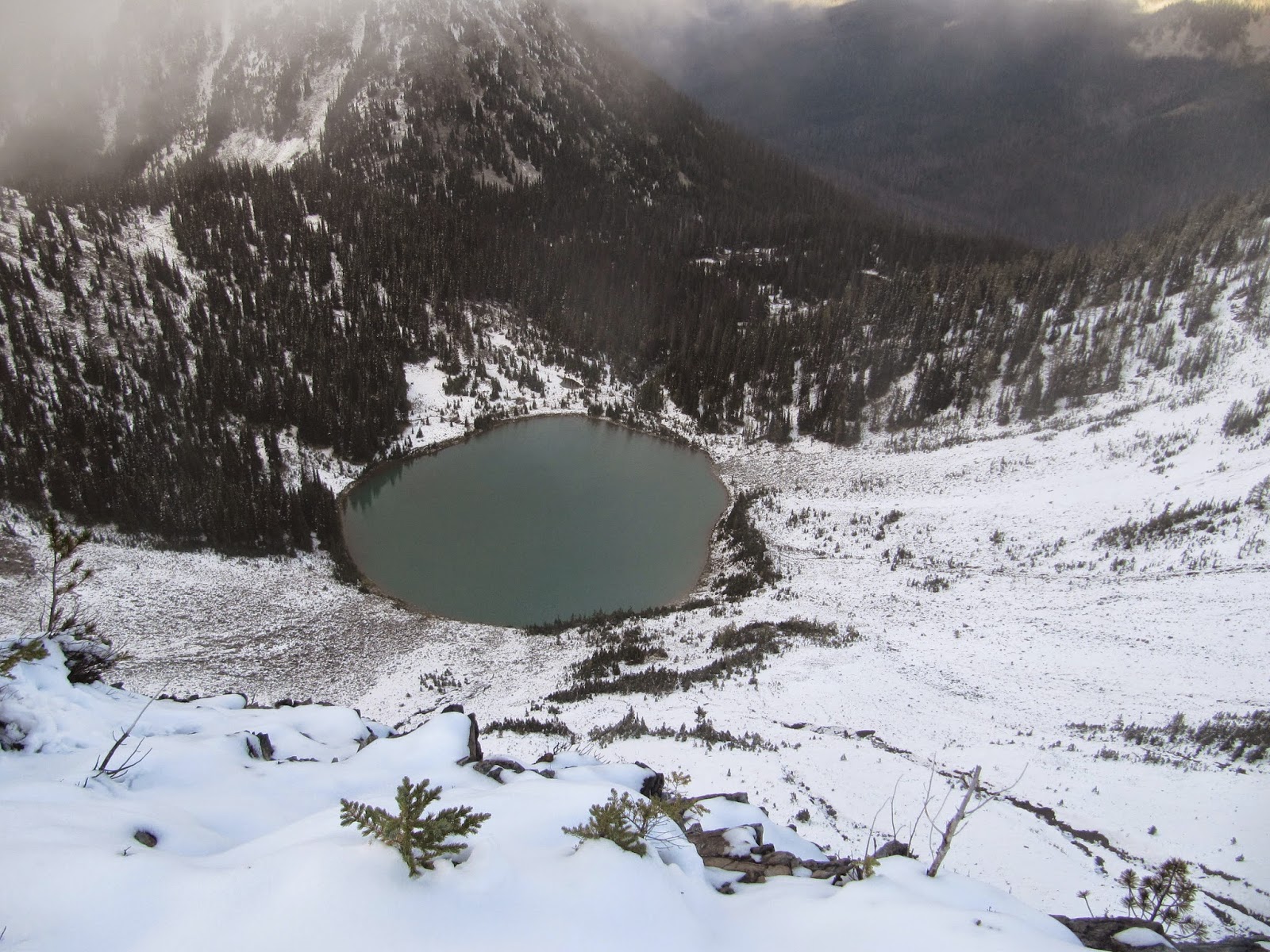 From our vantage point at the bottom of the Devil's Staircase, OTC and I looked down upon Hopkins Lake. OTC said we should camp there, and we did.