The couple who gave me the huckleberries said that Stehekin was over Red Pass and down the valley; could it really be that close?  Could it really be just over the hill?  I know I’m not pronouncing the name Stehekin correctly, as I’ve never heard the word before; I don’t know where to place the accent, but never mind, just thinking about the name brings excitement to my soul, for not only is it the location of my last resupply package, and not only is it situated just eighty miles from the Canadian border, but it’s also the home of the Stehekin Bakery.

In the trail journals of other hikers, I have read many glowing accounts of this little isolated town with its outstanding bakery that is worthy of superlative heaped upon superlative. For many reasons, I am overflowing with anxiousness to finally arrive in Stehekin.

It rained all night, so what else was new; I was awake early, and anxious to get on the trail.  I shook the tent vigorously in an effort to dislodge the drops of rain still adhering to the fabric of the tent, but to no avail.  Fog was still lingering in the low valleys, and a fine mist was falling from the grayish matter swirling above my head.  With stealth and deliberate movements, not wanting to disturb Hermes and Lotus, I struck my tent, rolled the soggy mess into a tube that resembled an elongated baguette, and stuffed it into its stuff sack.  Within a half hour, I was back on the trail, bundled in my rainsuit with my fleece hat pulled down low over my ears, and the hood and visor of my rain jacket pulled up over my hat.

The trail to Red Pass, though long, proceeded upwards at a gentle slope.  Off to my left, far down in the valley flowed the North Fork of the Sauk River, and I could see several horses moving about and a wrangler chasing after them.  It might be that it was still hunting season.

The trail was wet; the vegetation was wet; my shoes were sopping wet; and the trail was muddy, but eventually, I topped out at Red Pass.  And now I was looking at the heart of Glacier Peak Wilderness.  It would take a real wordsmith to describe the grandeur of the spectacular beauty that was to be found on the downhill side of Red Pass.

Mount Baker was off to my left, while on the right, somewhat hidden from view because of the cloud cover, was massive Glacier Peak; as I circumnavigated around it, I could see the glaciers flanking its sides like pearls on a necklace – White Chuck Glacier, Kennedy Glacier, and Scimitar Glacier. Snowmelt cascaded down the mountain to form multiple streamlets that eventually flowed together to become streams and creeks large enough to be named on Forest Service maps, i.e., Sitkum, Glacier, Kennedy, Pumice, etc.

From personal correspondence with I’m Fine, who lives in Pennsylvania, I gathered sufficient information from him that allowed me to pinpoint, on topographical maps, the exact location of his winter ordeal here on the west face of Glacier Peak.

After crossing Kennedy Creek, the trail climbed in switchbacks up to Kennedy Ridge, and to this point, even in deep snow I’m Fine was able to make out the trail by the faint indent in the fresh powder. He postholed up the ridge to Glacier Creek where he made his fatal mistake.

The trail crossed the creek, but being dark and buried in snow, he didn’t notice this detail, and instead of turning left to cross the creek, he continued straight ahead, climbing up the ravine, down which flowed Glacier Creek.  He camped for the night, hoping to find the trail in the morning.

At a point where it was no longer feasible to continue up the ravine, I’m Fine turned right in an effort to go back down the mountain to connect with the ridge he had walked up the day before.  As he descended, the slopes become steeper and steeper until they become drop-offs into a streambed.  Unbeknownst to him at the time, he had worked his way back down to Kennedy Creek, where he elected to spend the next nine days, hoping for a rescue.

Two miles beyond Glacier Creek, I made camp at the only flat spot around for miles.  It was an established campsite, large enough for three tents on the flat ground.  Along the way, I leapfrogged with Goodall and Blur and arrived at the campsite first.

It had been raining all day, and I was soaked and miserable; my shoes and socks had not been dry all day.  I desperately wanted to get into my tent, and just go to sleep.  As I was setting up my tent, Goodall and Blur came into camp and they debated whether to stay or move on to another camp two miles up the trail.  I told them I would scoot my tent over so that they could put both of their tents up.  I did, and they decided to stay.  Goodall is small and petite and looked like a drowned rat; she was exhausted and I could tell she didn’t really want to spend another hour walking in the rain, even though her friend Blur was willing to hike to the next camp.

Within minutes, I had my tent up and was situated inside of it.  I wish I could say I was warm, but everything I owned was wet, or at least quite damp.  After fixing a bite to eat, I crawled into my damp sleeping bag fully clothed, including my rainsuit.  I had a pair of dirty, dry socks that I put on in hopes of getting some relief from my frozen toes.  I slept, but only fitfully; many times, during the night, the cold woke me up and I had to rub my chest, arms, and legs to get them warm enough to fall back to sleep.  Sometime in the middle of the night, I felt hungry, and rather than ignore the discomfort, I searched around for my food bag and extracted a peanut butter cup; then using just my finger, I scooped the contents into my mouth.  Seriously, nothing tasted better at one o’clock in the morning.

A light drizzle was still falling when I awoke this morning and began preparing for the day.  When I went to bed last night, there were only three tents; now there were six.  The other hikers came in late, and with nowhere else to go, they took what space was left and pitched their tents on sloping ground.
This was a camping site where the Forest Service had installed a pit toilet; I decided to use it this morning.  It was situated away from camp and when I found it, there was a note attached to the wooden lid that read:

“Wasp nest inside toilet - got stung.”

Being somewhat of an urgent situation, I cautiously lifted the lid of the toilet to check for flying buzz bombs; seeing none, I decided to chance it and considered myself lucky to have walked away without any wounds.

Thirty-foot-wide Kennedy Creek, which I passed a few miles back, has an on-again, off-again bridge that spanned its turbulent, glacier-fed waters.  Today, the bridge was there, or most of it; both ends of the bridge were intact, but the middle had collapsed and the cold water of the creek was flowing over it.  The bridge at this location has a tendency to be wiped out by avalanches.  I doubt that it will be here after this hiking season, for either spring runoff or another avalanche will surely wipe it out, and without the bridge, a crossing at this location will be treacherous.

Clouds are low on the mountains this morning, obscuring much of the glaciers around Glacier Peak, but the scenery below the glaciers was as spectacular as ever.  The trail climbed to Fire Creek Pass and onto Mica Lake, so named because of the tiny flecks of mica found in the andersite rock that reflected the sunlight. 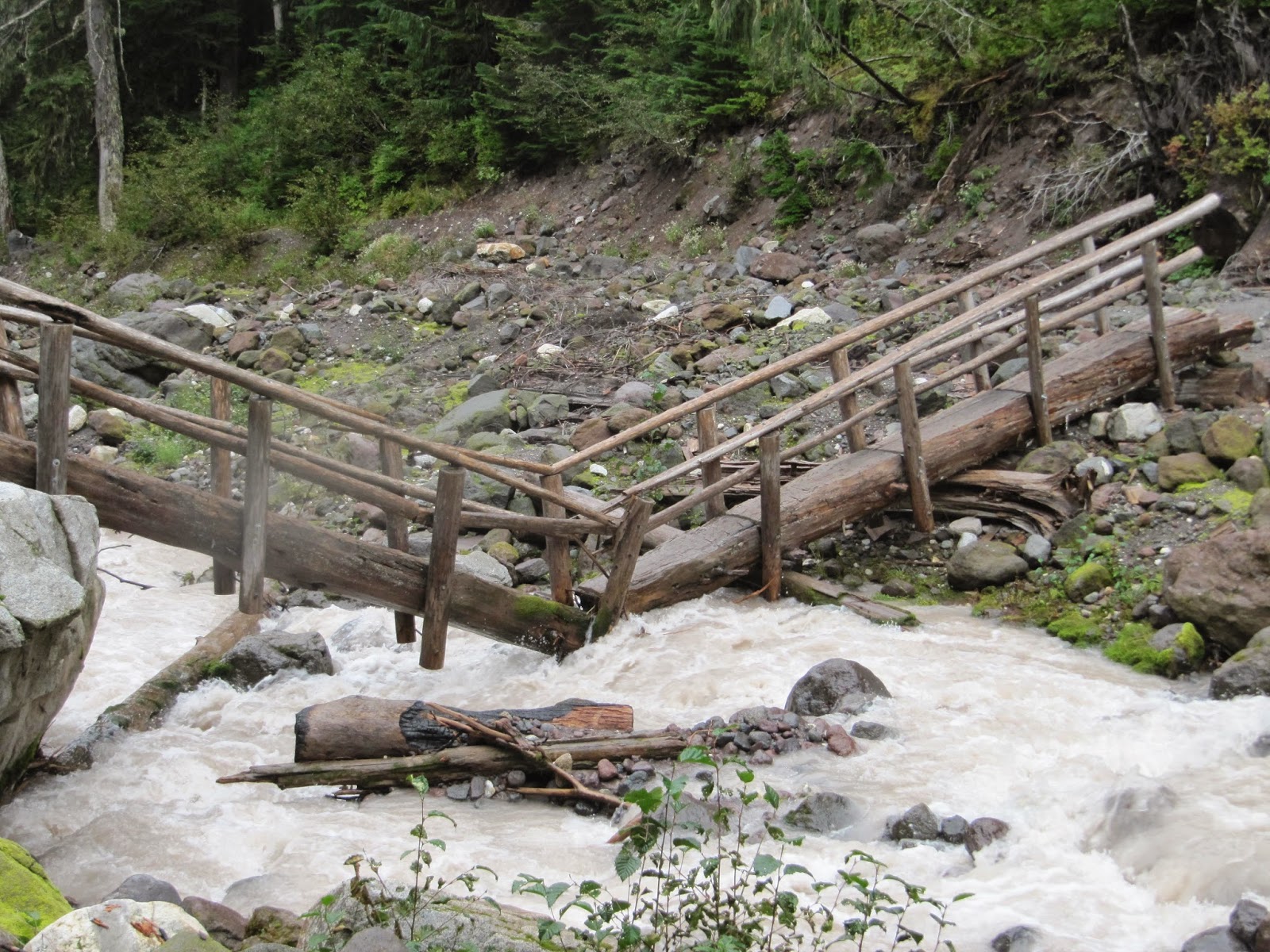 The bridge over Kennedy Creek. It's only a matter of time before a high spring run-off completely destroys it.