The warmth and tenderness and genuine compassion Beth extended to me were soothing and comforting.  I thanked her and her husband again and again for the kindness and generosity, and then they left.

As I walked back to the outhouse with my precious cargo, I passed the back of a parked SUV and caught a glimpse of myself in the reflection of the back window.  The trail had taken its toll on my physique; I saw that I was gaunt and scrawny, and where once I stood ramrod straight, I was now stooped shoulder, like a slouch.

I pulled away from the reflection and told myself that what I just saw was only temporary.  Better times would come once I began eating vegetables again and no longer walked with a heavy pack on my shoulders.  I sat down on the hard, cold cement pad, and carefully unwrapped the first sandwich; it was a beef and cheese combination, with lettuce and tomato and all the trimmings inside a stomach-filling small loaf of bread. I knew I should go slowly in eating the sandwich, but this was the first real food I had had in a long, long time, and I showed it no mercy; in seconds, it was gone.  I so needed this bit of comfort food at this time in the trek.  I had plenty to eat, and I wasn’t going to starve, but eating this sandwich was as much physiologically beneficial as it was physically beneficial.  I saved the other sandwich for later in the day.

With no one else around, I packed up, bid farewell to the cement outhouse that once again has provided refuge for a bedraggled hiker, and set out in the direction of the trail, which was down the road a hundred paces.

I learned that Hart’s Pass existed as a result of mining activity around the turn of the twentieth century, and as I climbed the trail towards Slate Pass, I could see the scars on the mountain from past mining activity.  During the time of the gold rush, there were two boomtowns established in the vicinity of the road that traversed the mountain, and off to my right, I could see Slate Peak that currently had a Forest Service fire lookout tower perched atop of it. (Lester)

During the Cold War of the 1950s, the U.S. Air Force took possession of the land, blasted forty feet off the peak in preparation for the installation of a permanent radar station to track incoming Russian missiles or aircraft; however, the site was declared obsolete before construction commenced.  The Forest Service took possession of the land once again, erected a fire lookout station on the peak, this time on stilts, to the same elevation of the peak before the forty feet were removed. (Slate)

The rain and snow had eased off a bit, but it was still cold; my climb was continuing to take me higher into the mountains; Buffalo Pass, followed by Windy Pass, were the next two landmarks on the trail that I needed to ascend to.  The climb was demanding, and although I was still practicing "pressure breathing," I did have to rest periodically.  At one such rest period, I turned around in the trail to gaze down the valley I had just walked up, only to see a very strange creature approaching me. I knew it was a hiker, but it was a strange-looking one.  Despite the cold, the hiker was wearing only shorts; his head was covered with the rain hood of his jacket that was pulled tight around his head, so that only his face was showing, and even then, not much could be seen, for the whole face was covered by the bushiest beard I had yet seen on the trail. As the hiker approached, I called out,

The hiker floored me when he replied that his name was OTC.  My gosh!  OTC and I hadn’t seen each other in over two thousand miles – a lifetime ago, back in the Sierras.  I didn’t think OTC recognized me either, but we embraced like long-lost friends.  I was so happy to have someone else on the trail with me, as I had considerable consternation about traveling these last few miles alone, as the trail continued to climb ever higher into the mountains, and the snow level continued to drop.

It was a real blessing to have OTC with me, as he had hiked the trail fourteen years ago, and was still somewhat familiar with it.  We hiked together for just a few minutes, and then he gradually pulled away from me, as his long legs propelled him up the trail.  I couldn’t keep up with him, but I could catch up with him, as he stopped often to take pictures of the gorgeous scenery.

We hiked another two miles when OTC informed me that there was a campsite ahead just below Tamarack Peak and we ought to take advantage of it, for there was nothing else available for miles.  Without OTC as a companion, I would not have recognized the small patch of trees as a campsite, for it was off the trail a short way, and instead would have continued tramping through the snow, until finally it would be too late to find a campsite, as the trail for miles traversed across the steep slopes of the snow-covered mountains.

It snowed a little last night, but as OTC and I were sheltered under the trees, we were spared the worst of the storm.  I left an hour or so before him as he was still cooking breakfast when I departed.  Leaving camp, I walked the spur trail back to the main trail, and began making new tracks in the freshly fallen snow.

The terrain was obscenely steep; the snow in places was now more than a foot deep.  The swirling black clouds that hide the peaks and obscured the trail continue to roll across the mountains and the trail washouts that were just ten miles ahead; all these combined together were going to make today one of the toughest days in the 2,665 miles of the trail.  Was I nervous?  Definitely, but without OTC’s companionship, I would be more than a little fearful.

The mountains here in the North Cascades in winter are black, menacing, and unforgiving to the strangers who enter into their domain.  The snow that is white, fresh, and innocent looking, does nothing to soften the harshness of the intimidating crags and pinnacles. The mountains are Lords over all, and they know it.  The hiker treads with caution and vigilance, knowing that he/she is a barely tolerated outsider and that the mountain will extract its full measure of justice for any carelessness on the part of the visitor who begrudgingly is allowed to pass.

After four miles OTC caught up with me, as I knew he would, and together, we pressed on.  I had to be extremely careful where I placed my feet, as the trail was covered in snow and ice and one misstep would send me careening a thousand feet or more down the steep mountain.

Another three miles of hiking brought us to the first of several menacing washouts that Nurse Betty had warned me about.  Since the washouts happened on August 11, 2013, there hadn’t been enough hikers pass this way to formalize a route through the washouts.  Every hiker was responsible for finding their own way through.

What was dangerous about the washouts was that all the rocks were loose.  Each step down to the bottom of the gulley, as well as each step up the other side, had to be carefully planned and tested to ensure that the loose rubble and large boulders were not dislodged, causing a landslide with the hiker ending up at the bottom of the rock pile.

OTC went first and disappeared into the washout, which appeared to be fifteen feet deep and twenty-five feet across.  He had difficulty with his route, so when it was my turn, I tried a different way; in the end, they were all equally dangerous.  It took us a good thirty minutes to carefully climb in and out of the four largest washouts before we could continue up the trail. OTC stayed with me to ensure that I made it through safely.

This experience was nerve-racking, and injury was just a loose boulder away.  The trail maintenance crews will really have their hands full when they try to reroute the trail through this unstable mess. 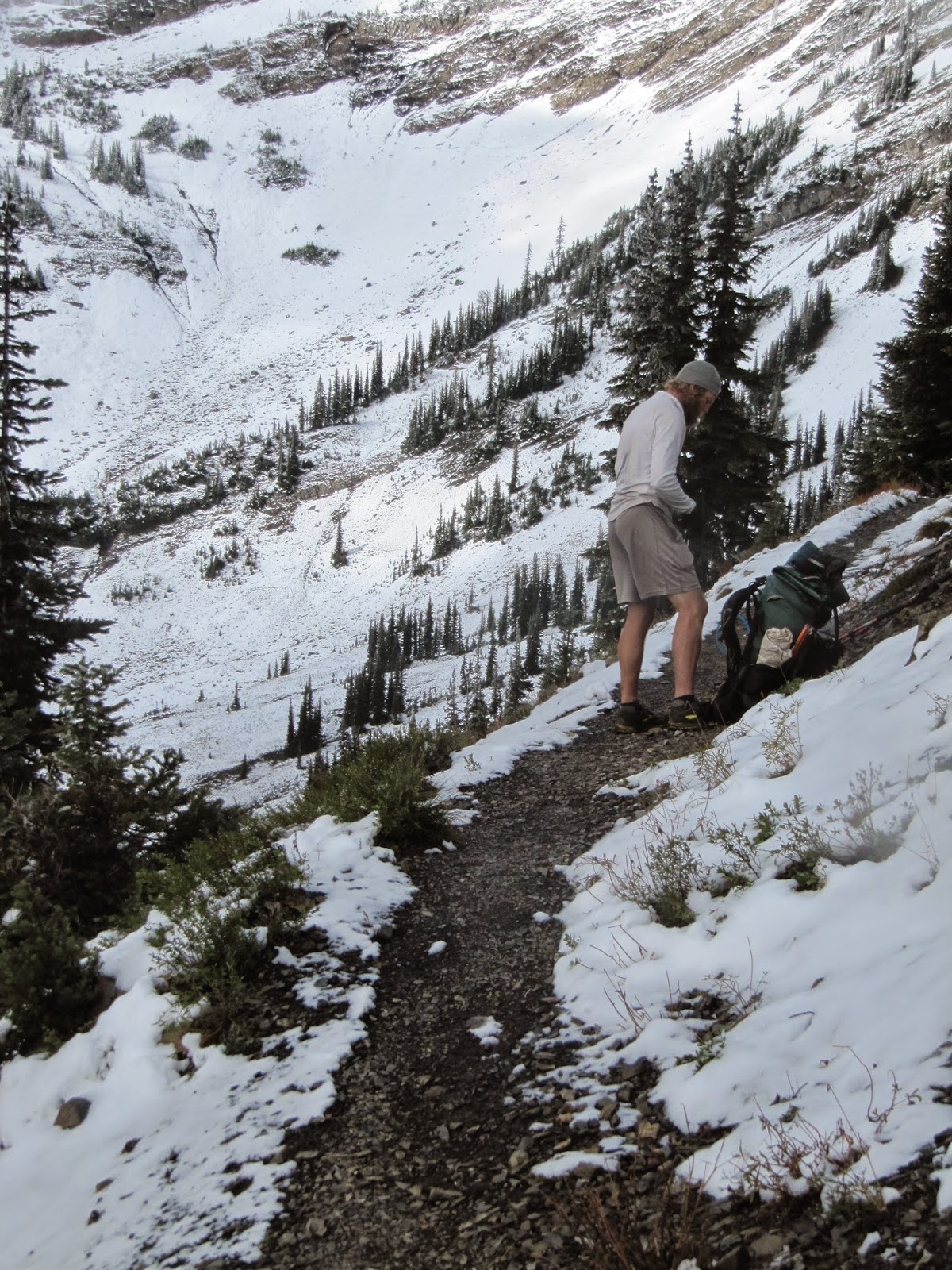 It's hard to  see OTC as he blends in so well with the background. I couldn't keep up with him, but I could catch up to him whenever he stopped to compose a picture, which was often. 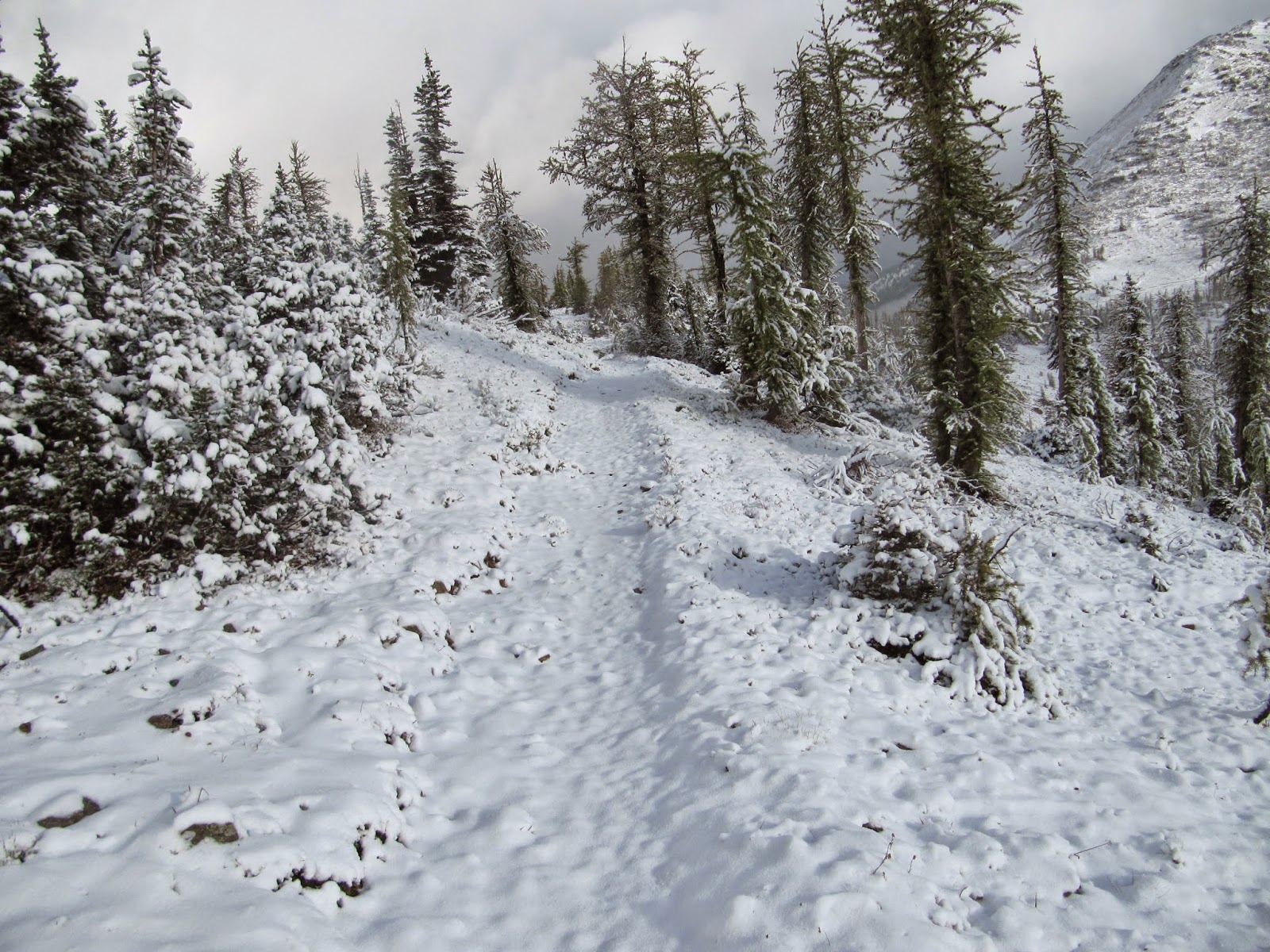 The snow got deeper the higher OTC and I climbed. 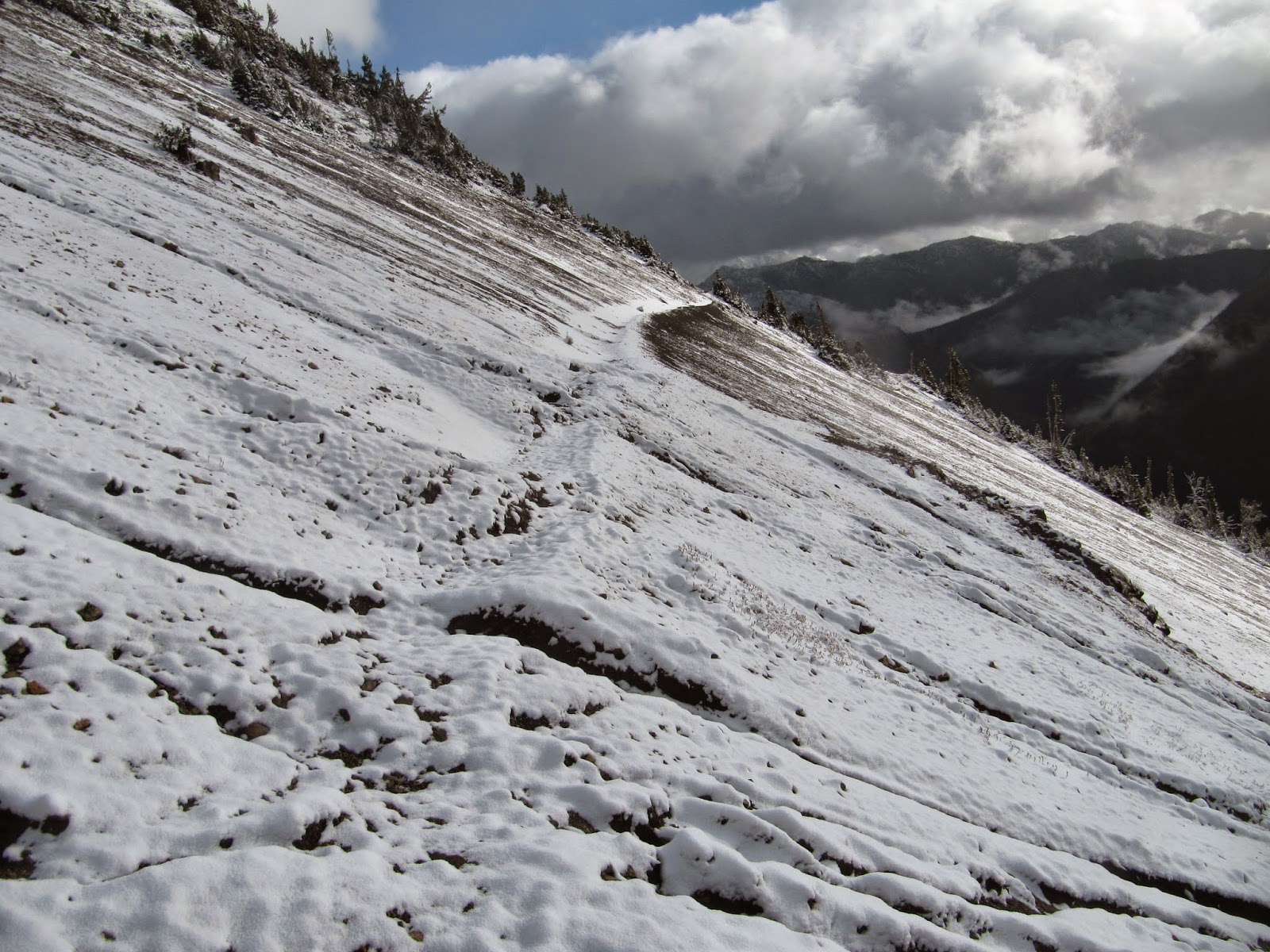 It's not a lot of snow now, but the weather is about to shut down the entire North Cascade Mountain Range. 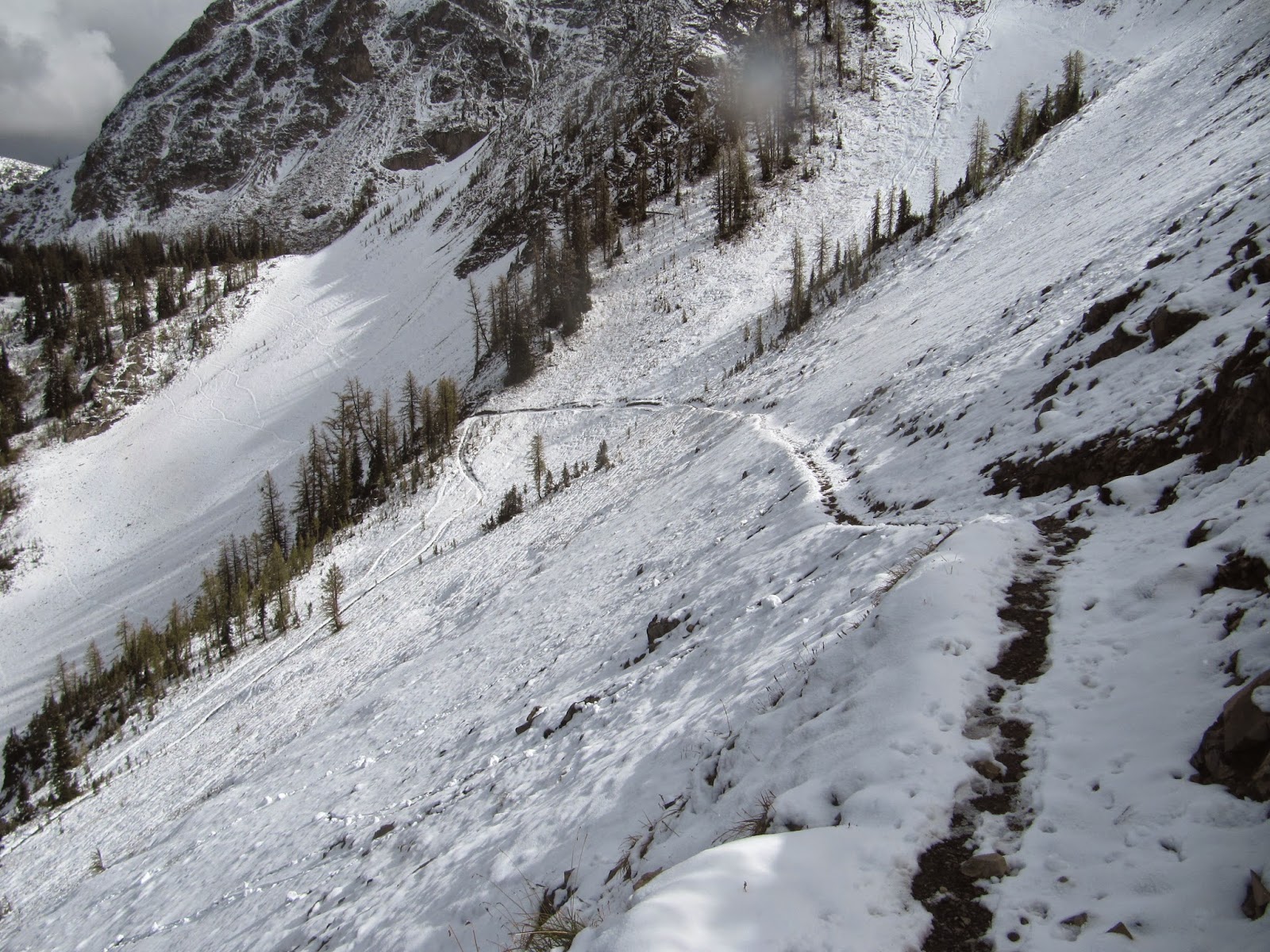 Coming over the pass, it was a long traverse down to the bottom of the valley and then the trail started up again. 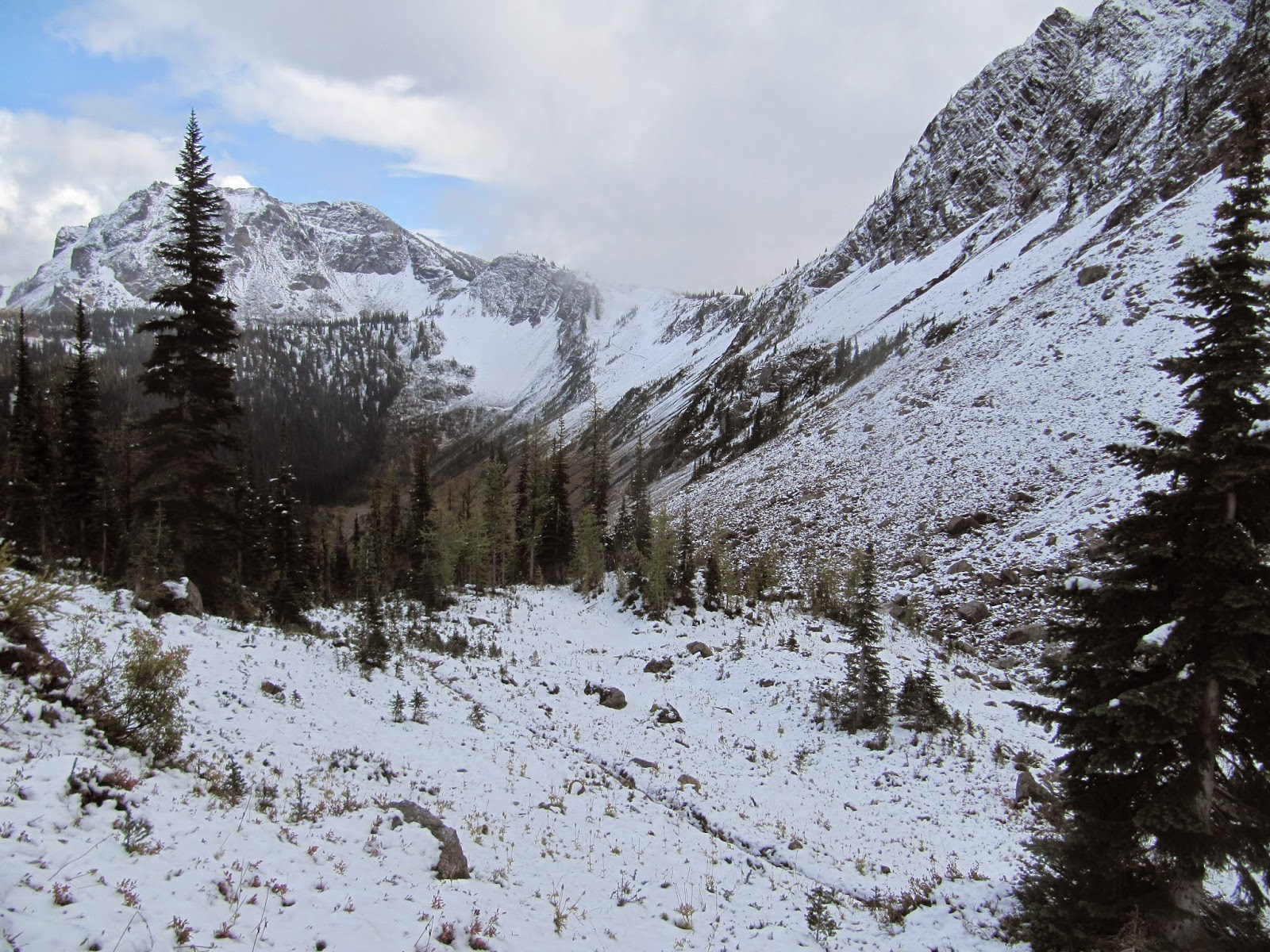 The trail has come over the pass in the middle of the photo. I'm now about to ascend Woody Pass, the last pass, on the PCT before descending to the US/Canadian border.
Posted by Richard Jones at Sunday, September 22, 2013