At the whaling station, Shackleton sent a boat to the south shore of the island to pick up the three remaining men.

Shackleton made three attempts to rescue the remaining men of his crew from Elephant Island, but was foiled each time by ice that blocked the approach to the island.  After four and a half months, the fourth rescue attempt was successful and all twenty-two men who had been left on the island, with nothing to eat but penguins, were rescued with no loss of life.  (Alexander)

For aspiring PCT hikers, I recommend conducting a mental inventory of personal strengths and weaknesses, using Shackleton’s character traits as a benchmark for comparison.  This will give the hiker a real life assessment of his or her capacity for enduring hardship, pain, loneliness, harsh environments, injuries, depression, etc.

Although the incidents that Shackleton experienced will not be the same for a PCT hiker, there are numerous mental and physical similarities that potential PCT hikers should possess before ever considering setting foot on the trail.  Among other traits, Shackleton possessed mental sharpness, ability to recover quickly from setbacks, and an indomitable spirit; he had the tenacity to stay focused on the goal, knew the big picture, but did not ignore the details, and was able to remain calm under pressure.

After reading this brief sketch of Shackleton’s exploits and daring rescue against such improbable odds, if you, as an aspiring PCT hiker, feel in your heart that what he and his crew endured would have been too much for you, you might want to consider a different adventure, something less grueling than hiking the PCT, for it's more than likely you’re setting yourself up for failure.

Like Ernest Shackleton and Roald Amundsen, Robert Perry and Robert Scott – all great polar explorers, the key word for Pacific Crest Trail hikers is endure, and not just with stoicism or emotional indifference, but “Endure it well.” (D&C 121)

From the parking lot trailhead, the trail climbed steadily upwards, paralleling Highway 2 for several miles before turning west.  In quick succession, fast-moving hikers Dinner Time, Tea Time, Kidney, and Hooligan passed me, but, to my satisfaction, I passed many slower day hikers.

Several miles of northward travel brought me to beautiful Lake Valhalla situated at the base of dark-gray Lichtenberg Mountain; then another quarter mile of hiking gave me my first view of distant ten-thousand-foot Glacier Peak, the regal monarch of the Northern Cascades Mountains.

Glasses Lake, Grizzly Peak, and Wenatchee Pass provided great photo opportunities, but the most scenic was Pear Lake, which like Lake Valhalla, was located at the base of a towering cliff.  Needing water, I slipped off my backpack and walked down to the lake carrying only my Camelbak reservoir and plastic water bottles.  The former PCT followed this path to the lake, but in the 1980s, the trail was rerouted to bypass the lake.

At the lake shore, I found two day hikers camped in a lovely camping site.  Fly fishing poles lay on the ground beside their tent, and in the tent someone was still asleep.  The second member of the party was busy picking huckleberries which he said would be used to make huckleberry pancakes.  I would love to have Yogied an invite to stay for breakfast and taste those pancakes, but the karma wasn’t right. 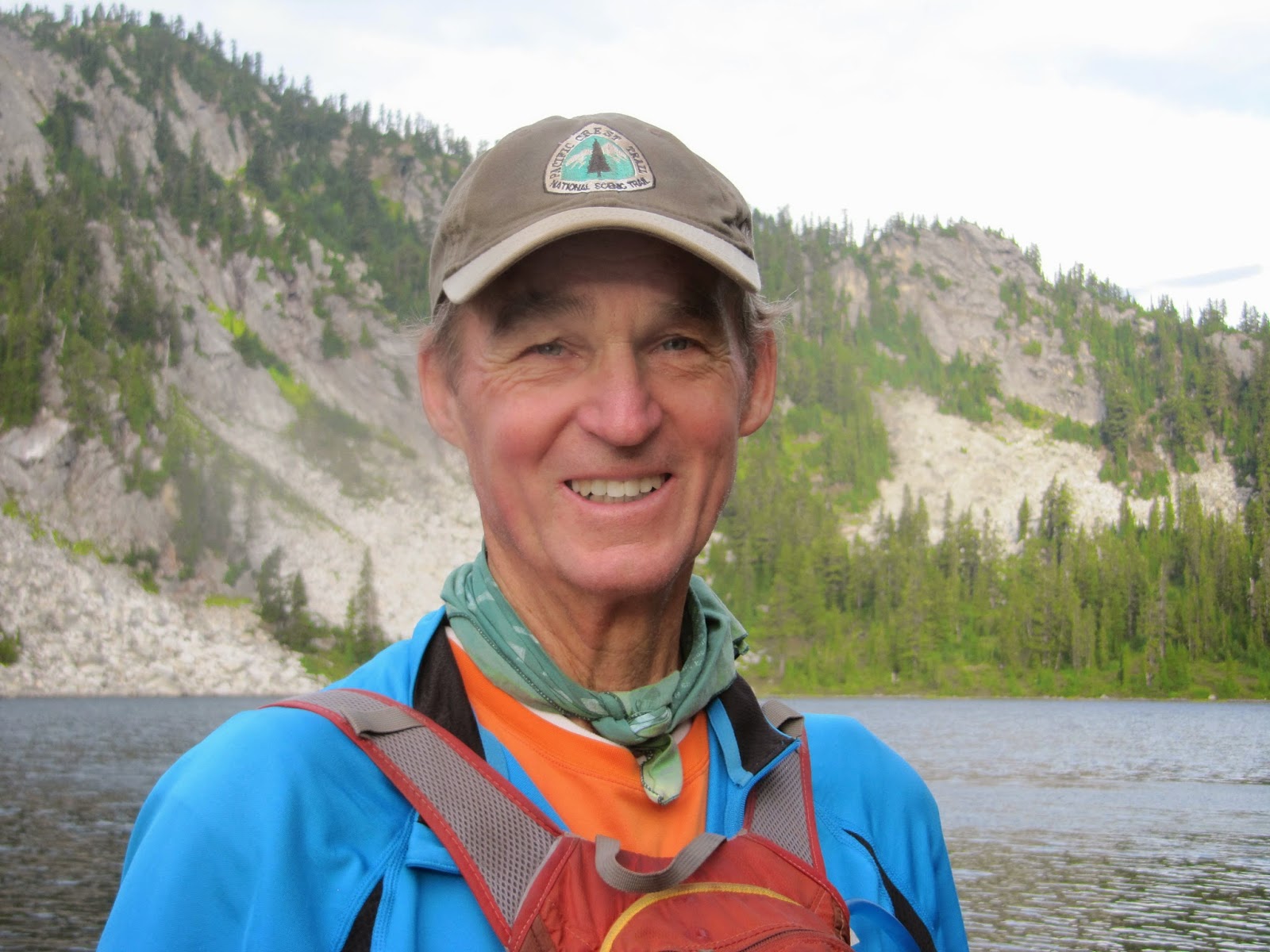 I met Jack Rabbit at Pear Lake. We traded cameras and took photos of each other. While Jack Rabbit continued to cook his breakfast, I headed back up the trail.