In the early afternoon, I passed Delmar Mountain and continued moving west.  Periodically when the vistas would open up, I was able to catch a glimpse of the blue waters of man-made Big Bear Lake, so named because of the numerous grizzly bears that used to inhabit the area as late as the 1850s.

In the late afternoon, I found myself in the wide canyon bottom of Holcomb Creek and Little Bear Springs Campground.  I considered the campground as a possible camping site, but then noticed the numerous trashed trails associated with motorized dirt bikes, and decided this might not be a good place to camp for the evening.  I moved on and found a much nicer camping spot a mile downstream.

By 4:00 a.m., I was fully awake, and trying to sleep any longer was fruitless.  It took me a half hour to break camp and get moving, but I wasn’t sure of where to find the trail, as it was down in the willows somewhere.  At 4:30 in the morning, it was still plenty dark.  I put my Mountain Hardware fleece hat on that had a headlamp sewn into it and started searching for the trail.  I found it down by the creek and began moving cautiously through the willows along the water’s edge to a point where the creek went under a dirt road, and I had to climb up the embankment to the road, where I promptly lost the trail in the dark.  I walked up and down the dirt road, which was called Coxey Road, looking for a PCT marker that would identify the trail, but no luck.

Where Holcomb Creek goes underneath the road, another dirt road with a closed gate across it intersected with Coxey Road.  In the dark, I ventured down this road looking for the trail, but discovered that the road started to disappear under water that was being backed up by beaver dams on Holcomb Creek.  So, I backtracked I stood by the metal posts of the closed gate and decided to wait until daylight to look for the trail again; so much for getting on the trail early.

With nothing to do while I waited, with my headlamp, I began to survey the surrounding area; the beam wasn’t bright and it didn’t penetrate very far into the darkness, so I looked down at my feet and then at the gate post I was leaning against, and then it almost jumped out and bit me.  It was the triangle logo of the PCT that I had been searching for.  I was leaning against it.  The trail passed right by the gate and several yards above the dirt road that was being inundated by the beavers.

Unfortunately, this was one of the drawbacks of hiking at night; you sometimes miss important trail junctions, and this wouldn’t be the last time this would happen.

It was pleasant walking in the early morning hours before the sun came up.  I was headed down Holcomb Canyon and along the stream bearing the same name.  The willows and the cottonwood trees that lined the stream banks provided a measure of shade in this otherwise barren landscape.  Above the green corridor of the stream, the hillsides were dry and waterless, and made even more parched and desolate by a raging wildfire, called the Willow Fire that swept through the area in August 1999.  It blackened the hillsides of this portion of Holcomb Canyon, and then raged down Deep Creek to the Mojave River Forks Reservoir Dam, some thirty miles distant.  (Willow)

Within a few miles the trail and the stream parted ways, with the stream moving northwest, while the trail continued due west to intersect with Deep Creek at a bridge crossing a few miles distance.  At the bridge, there was a trail heading south to Lake Arrowhead, and if I had been short on supplies, I could have followed the trail/road to the communities lining the shoreline of Lake Arrowhead.

One would need a thesaurus to fully understand the superlatives former hikers have used to describe the beauty and magnetism of Deep Creek, with its alluring pools of green water that constantly beckoned to the hikers to forget the hike and stay awhile and swim.

But, it could not be, for although the trail and stream at the bridge crossing started out at about the same elevation, due to the massive boulders that lined the banks of the stream, it was not possible for the trail to follow alongside of it.  So, the trail climbed and after reaching an elevation several hundred feet above the creek, it leveled off and was content to follow the contours of the mountain, traipsing in and out of every gully and ravine, never again coming close to the refreshing pools and small falls until it crossed the small creeklet of warm water at the hot springs.

It was late in the evening as I descended the dusty trail leading to one of the most famous and memorable trailside stops on the entire Pacific Crest Trail – the Deep Creek Hot Springs.  A fissure deep within the earth allowed hot water to flow from rocks adjacent to the trail and into the cool waters of Deep Creek.  Over time, visitors to the area had dammed up this water, forming pools, similar to natural spas.

The hot springs just happen to occur at a wide bend in the stream forming a natural pool suitable for diving and swimming.  The springs were remote and isolated to anyone other than trail hikers, and it took real dedication and determination to reach this area from the back roads on the high desert plateau above.

Nevertheless, on any given day of the week, there were people enjoying the warm waters of the springs.  And, of course, following a long tradition at the springs, clothes were optional, which helped to make a visit to the springs so memorable.

There were a number of hikers already at the springs when I arrived.  Some had been there most of the day and were preparing to move on up the trail.  As soon as I arrived, several of these departing hikers quickly informed me which sections of the pools were for soaking with clothes on, and which sections were for au naturel bathing.

My feet were killing me, so I removed my shoes and socks and limped across the sand to one of the smaller hot tub pools and placed my feet in the soothing water.  Ah, it felt so good, I stayed for an hour.  I was seated next to a young girl named Jess, age twenty-one, who was also soaking her feet.  She had been having some real feet problems due to the shoes she was wearing.  I would meet her several more times up the trail as she continued to battle with ill-fitting shoes.  When I first met her, she didn’t have a trail name, and eventually I would lose track of her, but from other hikers I learned that she acquired the trail name of Night Crawler for her propensity of hiking at night.

It’s not often one sees a completely naked human body in the flesh, but here at the hot springs, hikers and visitors alike cast aside their inhibitions and mingled freely with one another while sitting and swimming in the buff.  I have to say I saw more flab, more wide rear ends, and more sagging flesh than I had ever seen in my entire life.  So, yes, the hot springs were a memorable place to visit. 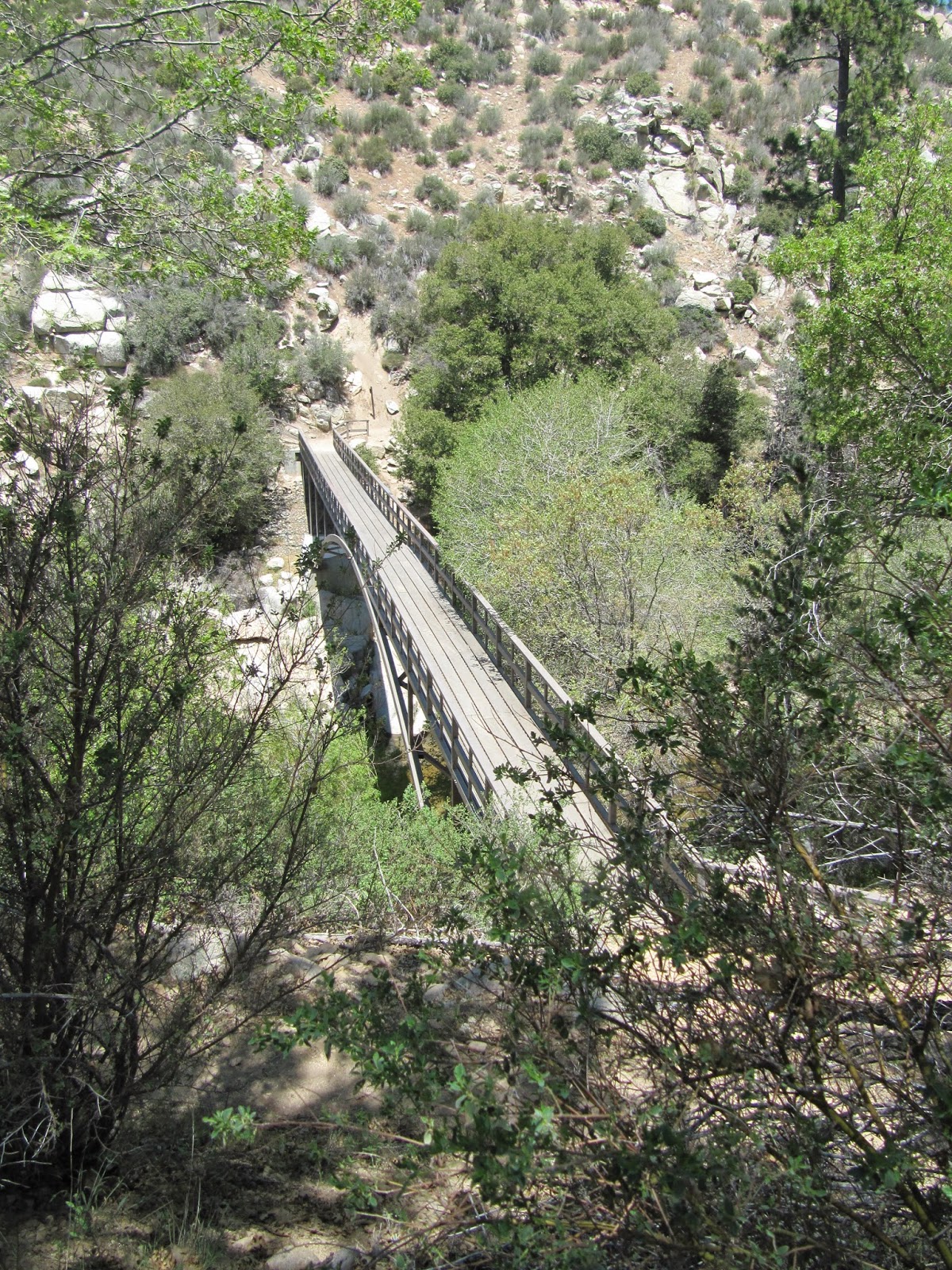 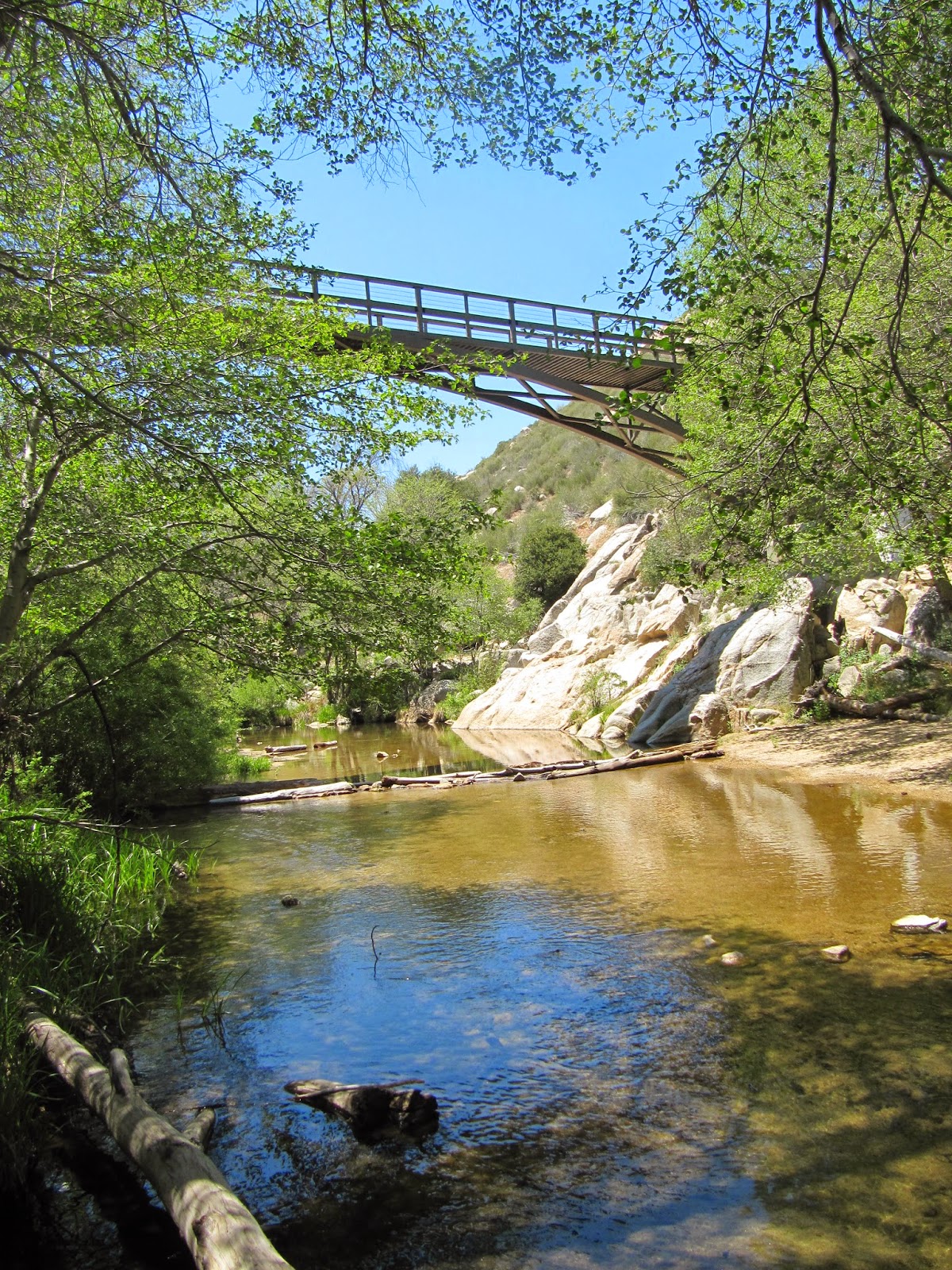 The bridge over Deep Creek from water's edge. 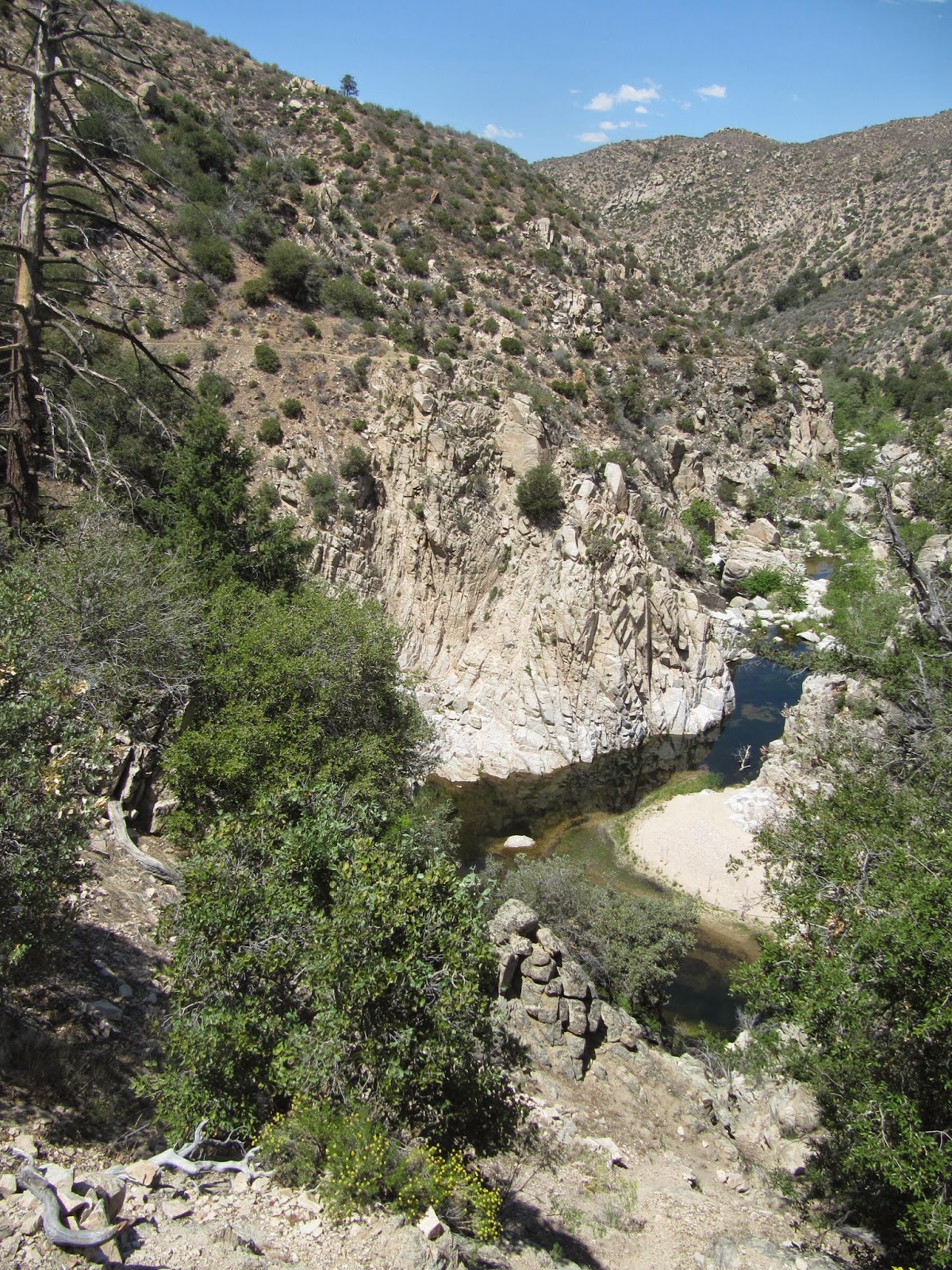 The trail had to stay high on the cliffs, thus missing a plethora of inviting swimming holes. 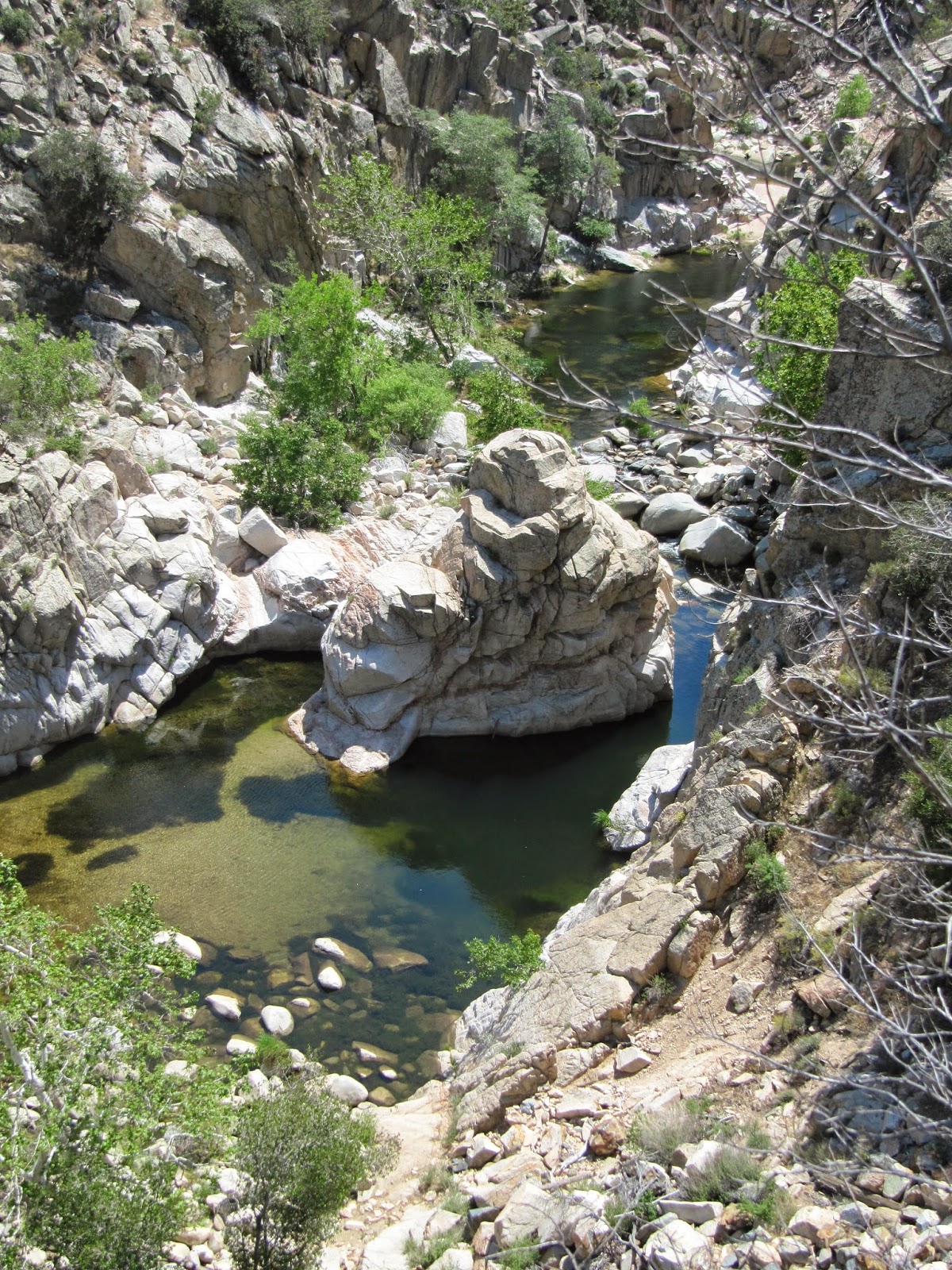 One of many enticing swimming holes that one could not get to.