Lady Killer consulted his GPS, and this time zoomed out a bit further so that the screen showed a wider area of terrain.  It confirmed that we were indeed headed in the wrong direction, so we did a five-mile round-trip for nothing.  By the time we got back to the point where we had made the wrong turn, Night Crawler was lagging far behind; we could see she was limping.  We waited for her and she told us she was having considerable trouble with her shoes.  We continued on, and again Night Crawler lagged far behind.  Eventually, we came to Eagles Roost Campground where Lady Killer and I waited for her.
She was crying and obviously in a great deal of pain.  We had her sit on a picnic table and remove her shoes and socks so we could have a look at her feet.  They were horrible.  She had large blisters on her big toe and between her toes as well as on her heels.  She had some bandages and tape on her sores, but they weren’t doing much good.  We washed and cleaned her feet, and then I reapplied tape and 2nd Skin adhesive pads to the blisters.

The problem was with her shoes; they were too narrow in the toe box causing her toes to rub together forming blisters.  Jess said she was to receive new shoes in a few days.  We told her we would walk with her to the next campground, but she said she would be fine and told us to go on, which we did.

Lady Killer and I walked together until 8:00 p.m., at which time I decided to retire for the day.  Lady Killer continued on.  By 4:30 a.m. the next morning, I was on the trail and found Lady Killer, who had camped only a half mile from me, still in his tent.  He told me he didn’t usually rise until seven in the morning.  I learned later that Night Crawler had passed both of us during the night.
While we were helping her the day before, she mentioned she was meeting her aunt and uncle at a road crossing off Highway 2 at 9:00 a.m., which was this morning.  Her meeting was to have breakfast with her relatives and to receive a new pair of shoes.

I would say that Night Crawler is typical of the female hikers on the trail – tough, resilient, determined, and focused.  They set a goal and do not veer from it, despite the hardships, severity, and harshness of the trail.  They don’t complain or whimper when times are tough, when things don’t work out as planned.  They’re very flexible - jumping to plan B or C should plan A fall through.  Yes, they cry, they get scared, and they have the same hiker aroma as their male counterparts, but they chalk it all up to experience and keep moving forward.  Quitting is not a part of their game plan; they have come to realize early on that just because the trail is steep, their pack is heavy, the sun is brutally hot and it’s a long way to the next water source – all these were no excuse for quitting.

Water is my most pressing need for the day, and I located it early in the morning at a Boy Scout campground called Camp Glenwood.  The water was from a water tap located in the campground.  A sign next to the tap said the water was not potable, so I took the time to treat it with household bleach I carry with me for this purpose.

A few hundred yards from where I was standing, I could see smoke rising from a campfire and a hiker named Dusty getting his gear ready for the day’s hike.

The four liters of water I had with me would get me to the next reliable water source at the Forest Service Mill Creek Summit Ranger Station, located at yet another crossing of Highway 2.  I hadn’t kept track of the number of times the trail crossed back and forth across this highway, but it had to be close to ten.

The trail at this point is still high in the mountains; to the north, I could look down on the Mojave Desert and vaguely see the outlines of streets associated with the city of Lancaster and Palm Dale.  And because the trail is nearing the desert, the vegetation covering the mountains was beginning to reflect a landscape that doesn’t receive a lot of water.  Nevertheless, there were still shaded valleys that had a thriving population of live oaks and big-cone spruce trees, and in and around these scattered oases of green were Forest Service campgrounds and springs.

A long way before arriving at the Forest Service fire station, there was a detour aptly named the Burn Station Detour, which required about five miles of roadwalking.  Because of a massive fire in 2009 that destroyed the vegetation along the trail, the trail had become unstable as a result of subsequent rains that washed parts of the trail down the mountainside.  (Sahagun)

For many miles, the trail/road descended through a landscape devoid of vegetation, with only the charred remains of once-mighty oak and large-cone pine trees dotting the mountains like fallen warriors after an epic battle.  Nothing was spared as the Station Fire devoured everything in its path.  Believed to have been started by arson(s), the fire quickly got out of control and became one of Southern California’s most expensive and wide-ranging fires.

It threatened the Mount Wilson Observatory and numerous communication towers located on top of the mountain, but were miraculously spared as the fire roared by on both sides of Mount Wilson.

Tragedy struck the firefighters when two of their members were killed when their fire truck careened off a cliff as they were speeding down the mountain trying to elude the flames that were rapidly overtaking them.  (Alexandra)

From the Forest Service dirt road overlooking the Mill Creek Summit Fire Station, I could see dirt trails departing the road and moving directly towards the fire station.  When I finally reached the trails, I too left the road and followed them to the fire station which appeared to be brand-new.  Perhaps the old one was destroyed in the 2009 fire, however, I never thought to ask.

When the new station was built, the planners might have had the welfare of PCT hikers in mind, for there was a nice cement patio with a wooden lattice covering which provided a modicum of shade situated behind the station.  In this area, there were two water spigots and several wooden picnic-style tables for hikers to use. 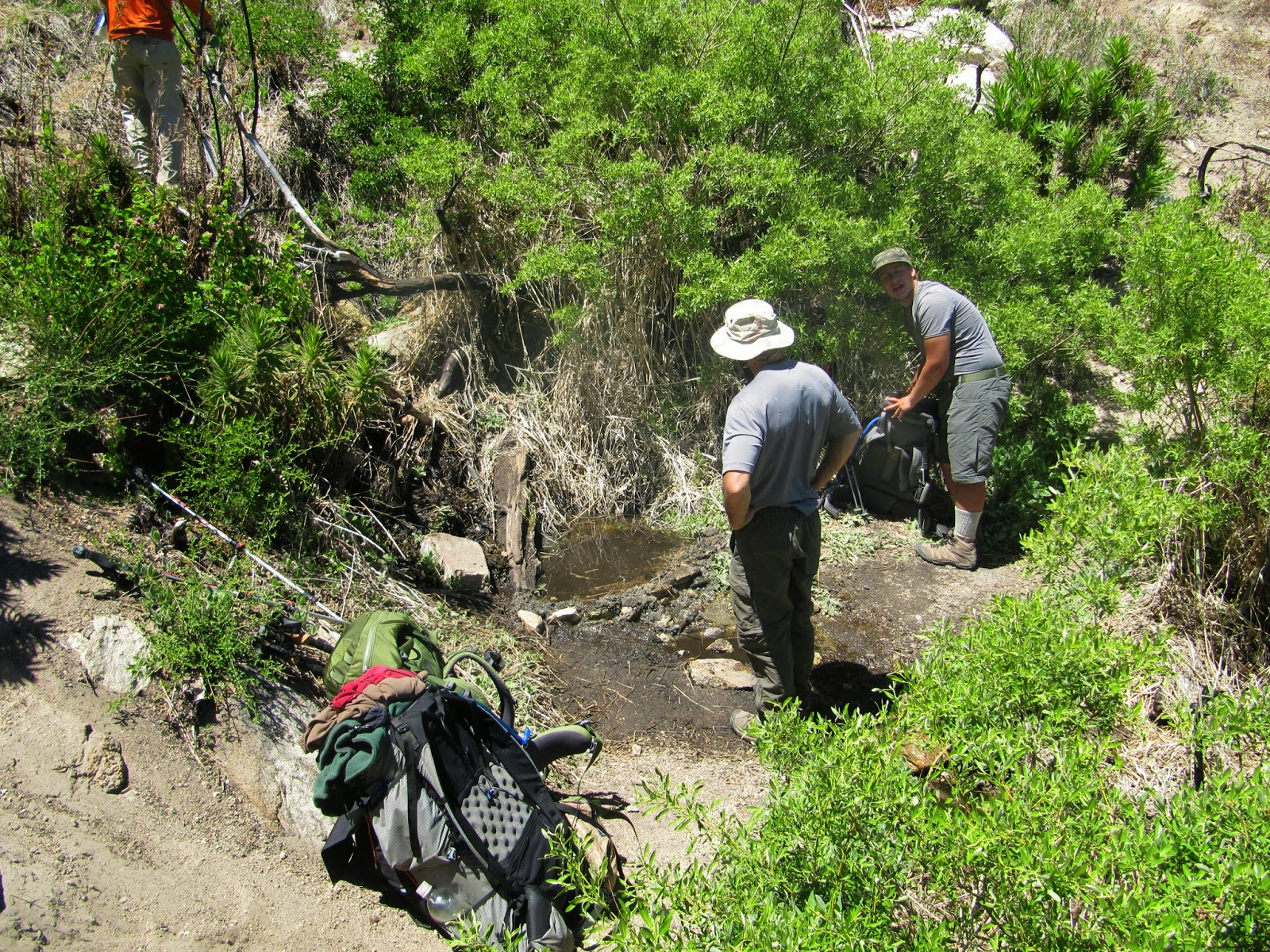 Two hikers debating whether to take water from this meager source. Because I always carry extra water with me, I was able to bypass this muddy pool. 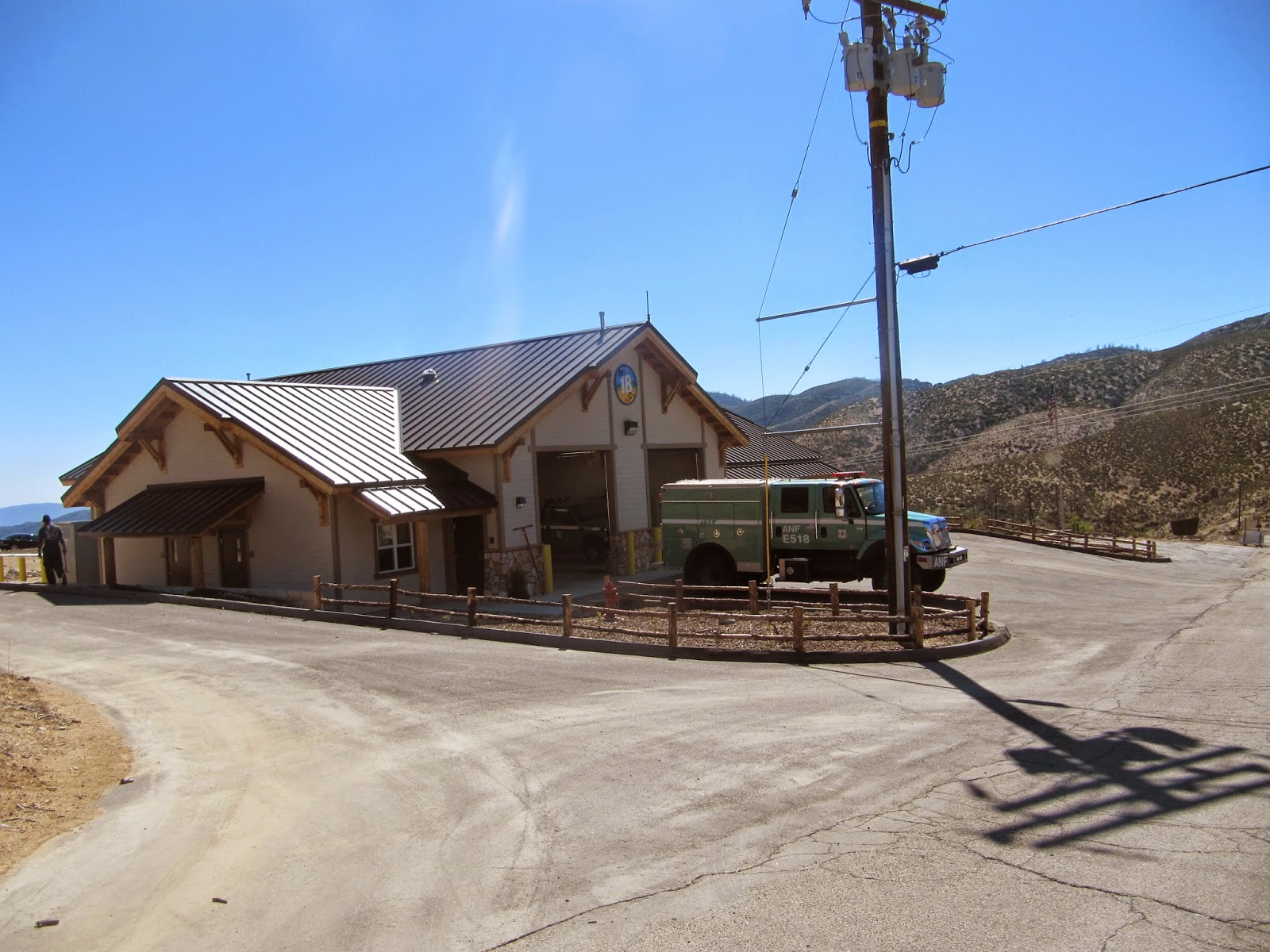 The Millcreek Fire Station. I didn't think to ask, but this station may be new. The older station having been burned in the Station Fire burn. 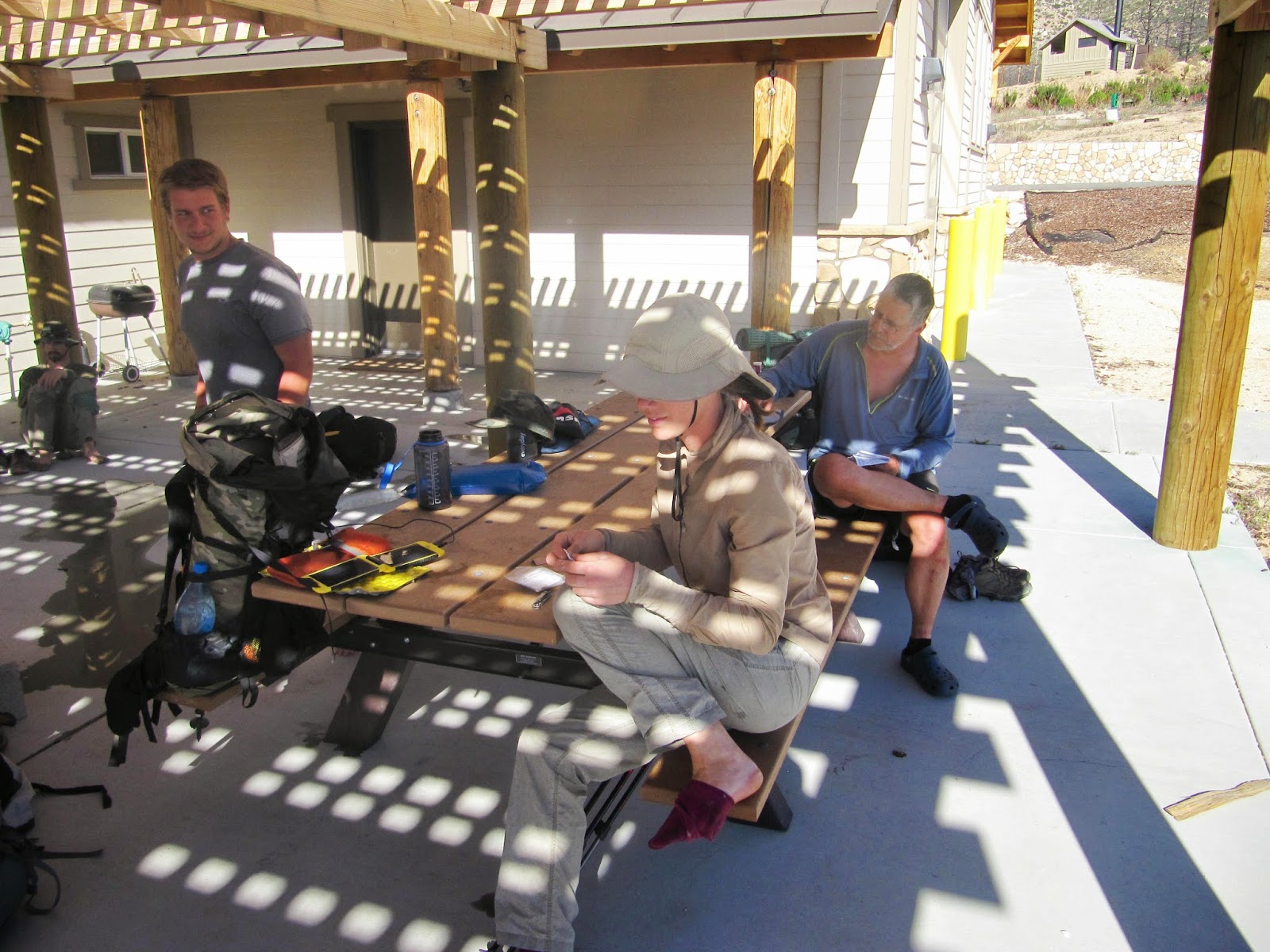 On the back side of the fire station is a patio with tables where hikers can rest a bit and obtain water. 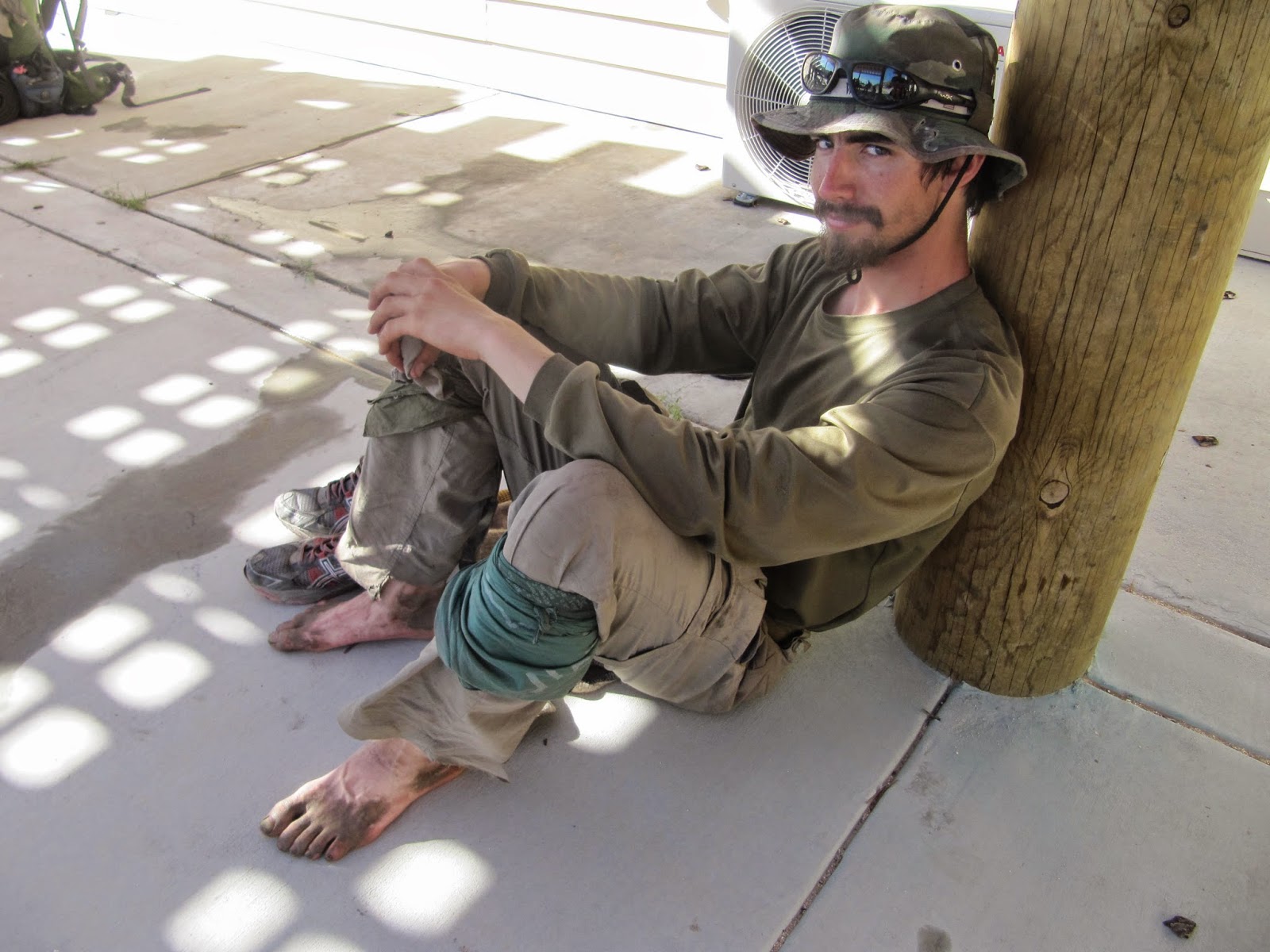 A very tired hiker, taking advantage of the shade, cool cement and water. 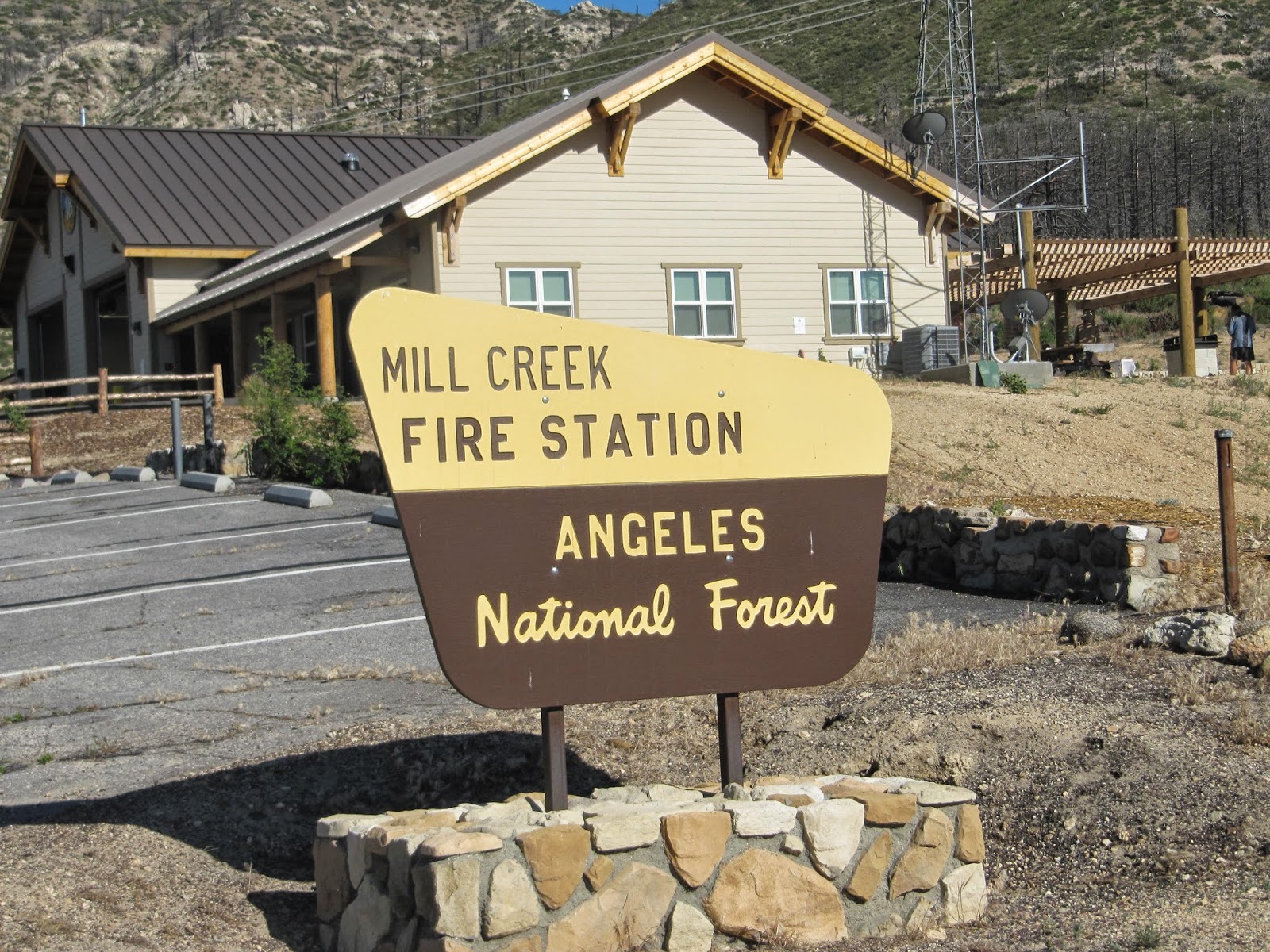 There was only a female captain and two grunts at the station when I arrived. The three were trying to fix a leak in the main water system. 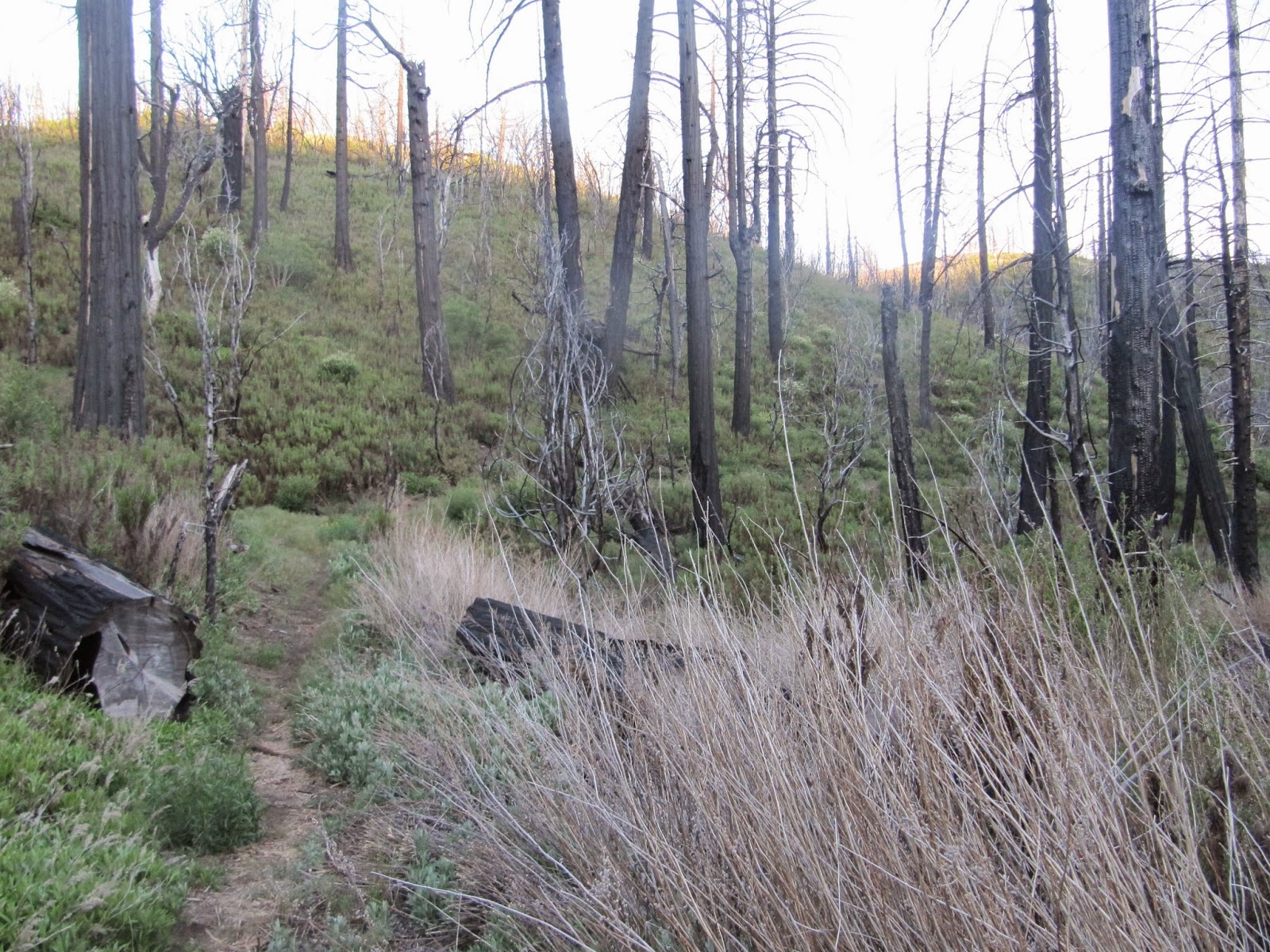 The result of the 2009 Station Burn fire. 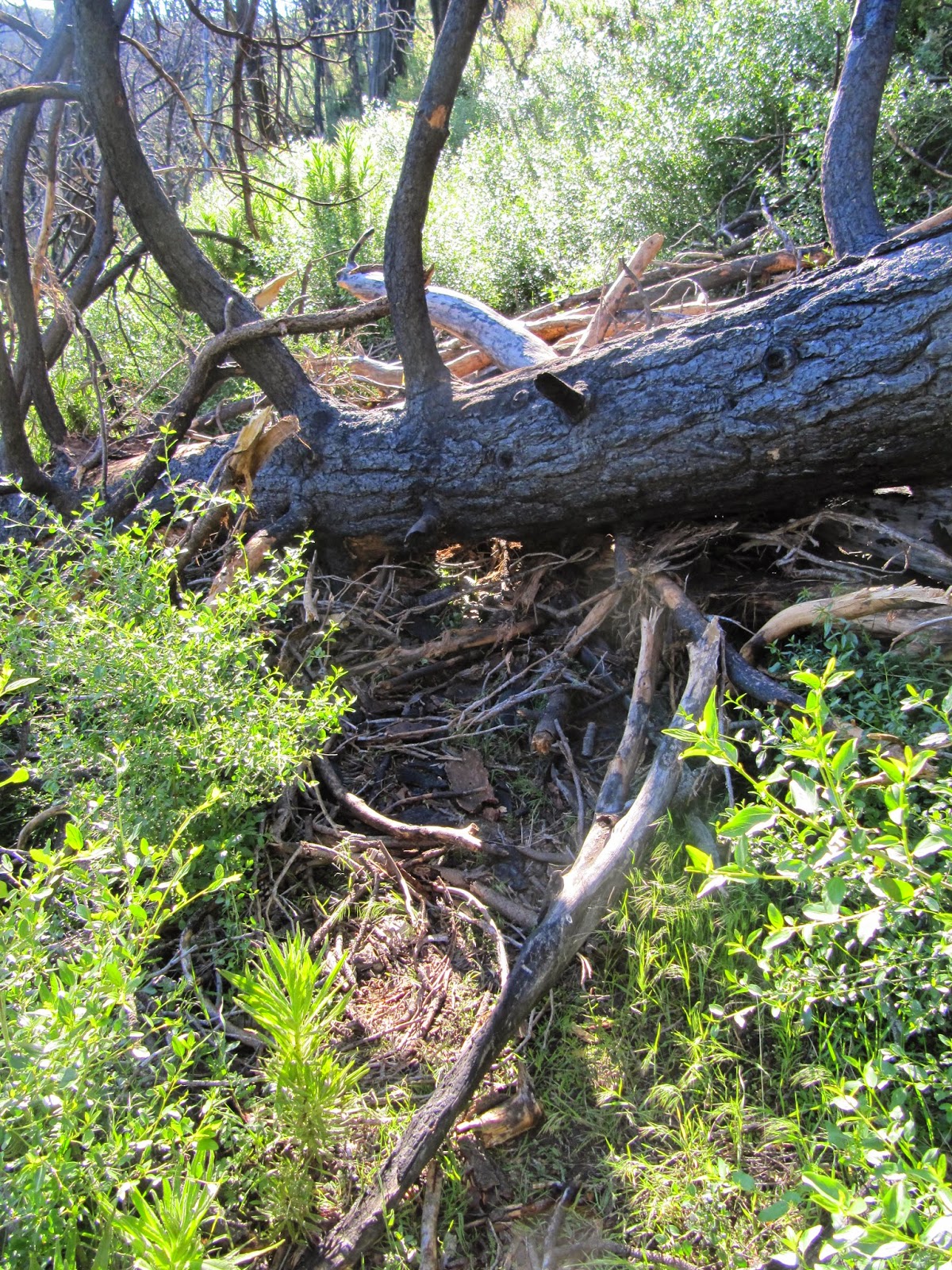 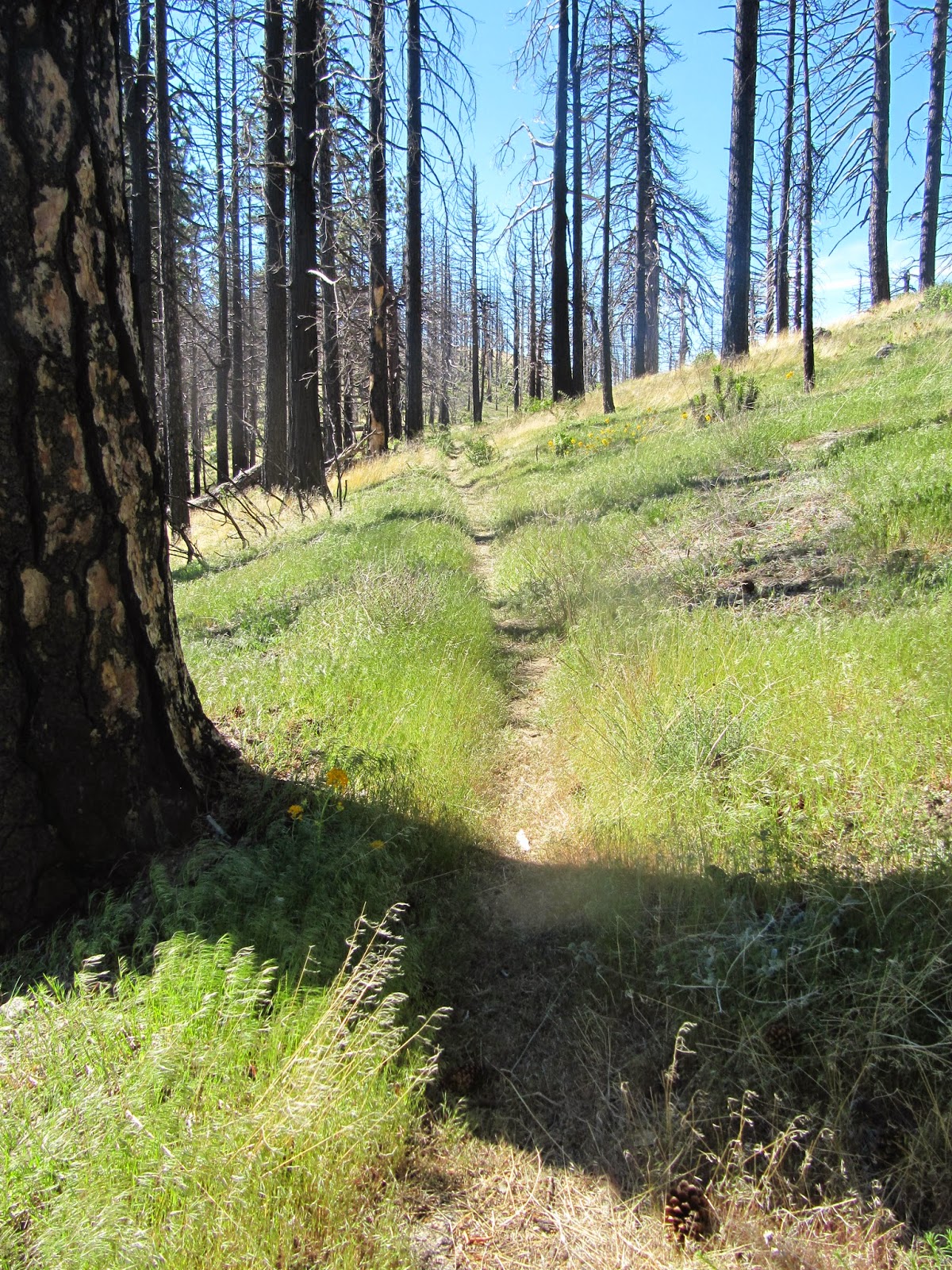 Fire decimates everything, but in 100 years, there will be a whole new forest here.