Every step brought me closer to the gray wall of impenetrable granite until finally I stood at the base of the barricade.  It reminded me of the Stone Mountain fortress of the dwarfs from the movie The Hobbit.  Far above, I could see a small speck crossing the avalanche snow chute in the notch leading to the pass over Forester.  I watched with bated breath, praying that the speck wouldn’t slip and tumble down the chute to the rocks below.  I recognized the speck as Runs-with-Elk.  She crossed the slippery snow chute with ease and disappeared into the rocks.
Now it was my turn to ascend the rocky trail that culminated at the pass just beyond the avalanche snow chute that was visible to my eyes.  Now that I was on the mountain trail, I could see that the trail builders used dynamite in large quantities to create a passageway up the face of the vertical cliff.  After the granite had been blasted apart, the fragments of loose rock were carefully stacked to form a staircase of switchbacks that gradually ascended the rock face.  The trail was wide, as it was built to accommodate horses and pack animals, and I felt no need to hug the cliff walls.

Up and up I climbed, stopping often to rest.  The thin air didn’t help my oxygen intake and probably contributed to my need to go slow and rest often.  Coming up the last switchback, I could see the avalanche snow chute in front of me.  From far below, it looked as though the trail might actually climb up the chute, as opposed to crossing over it.

I stood at the edge of the chute; it contained the only snow encountered thus far.  It looked to be about fifty feet wide, and to move across it, all I had to do was plant my feet in the footsteps of those who had gone before.  But one misstep, one off-balanced move, and I would be sliding, out of control, down the snow chute to the jagged rocks hundreds of feet below.  This was the moment and the reason for the ice axe, but I had none; I had only my trekking poles for balance.

With trepidation, I stepped off of the bare rock trail and onto the snow and ice-covered path leading across the snow chute.  I carefully placed each shoe in the foot-deep hole in front of me.  I felt like I was walking on top of a railroad track, trying hard to balance myself and not fall off.

I concentrated only on making the next step, never pausing to look down the chute, for fear of losing my balance.  Halfway across, however, I planted my trekking poles firmly in the snow, one on each side of my body, and took a breather; only then did I take a moment to glance around at my surroundings.

My position was precarious, but the scenery was stunning, and I was elated that I had made it this far; only a few more steps and I would be on terra firma.  My pace was slow; it had to be.  Every step had to be precise and solid before I attempted another one; a misstep now would be catastrophic.  Finally, the last step was made, and I was once again standing on solid rock that was free of snow and ice.  Two more small switchbacks and I was standing on top of Forester Pass, the highest elevation on the PCT at 13,200 feet.

Those who passed me earlier in the day had moved on.  Only Lightning Rod was at the summit and I found him stretched out on the ground sleeping under the shade of his GoLite silver-coated umbrella.  He stirred when I approached and said he was waiting for his father and his father’s friend who had been hiking with him for several days.

The two of us decided this was a good place to have lunch, and I celebrate with two peanut butter and grape jam sandwiches on tortilla shells and a handful of frosted animal cookies.  Before long, we were joined by Shark Bite and Faucet and Lightning Rod’s father and friend.  We all rejoiced at having reached this major milestone in the long PCT journey, and we joked about the fact that it was all downhill now to the Canadian border.

From the top of the pass, the view northward was looking down into Kings Canyon.  Its U-shaped bowl gave testament of the glacial forces that carved the canyon eons ago.  The north face of Forester Pass, even in mid-June, was still buried under several feet of snow.  The trail was not obvious and the first hikers who came through several weeks ago blazed their own trail down the slope until they were out of the snow.

Those who came after followed in their tracks, and I did likewise.  In the hot sun, the snow was melting fast, forming small rivulets that flowed along the surface of the trail when it was exposed, making the trail muddy and wet.  The rivulets combined and formed small streams that emptied into a lake just below the snow line. The hike up to Forester Pass was grueling, making the descent all that much sweeter. 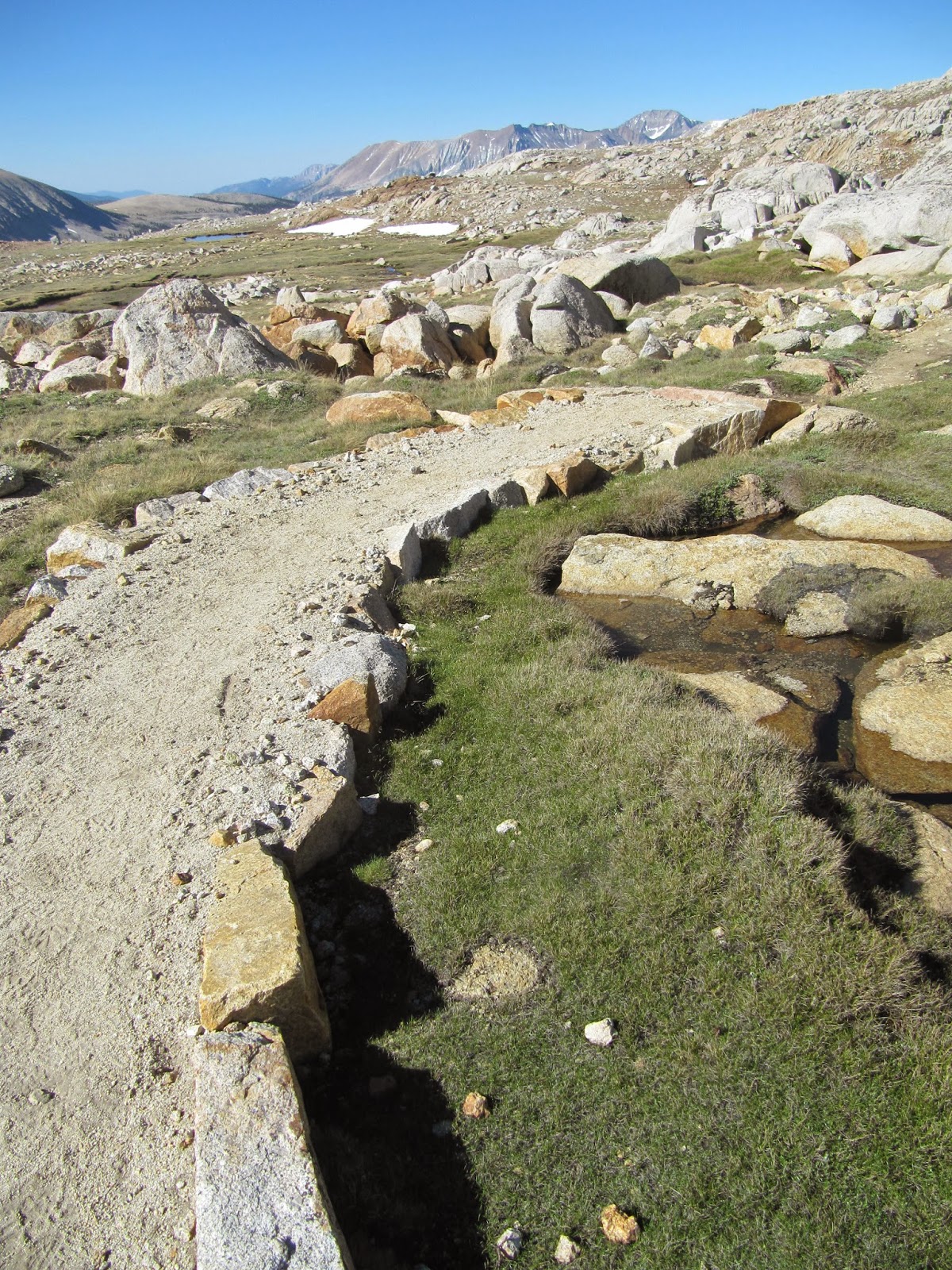 The trail through this area was mushy. 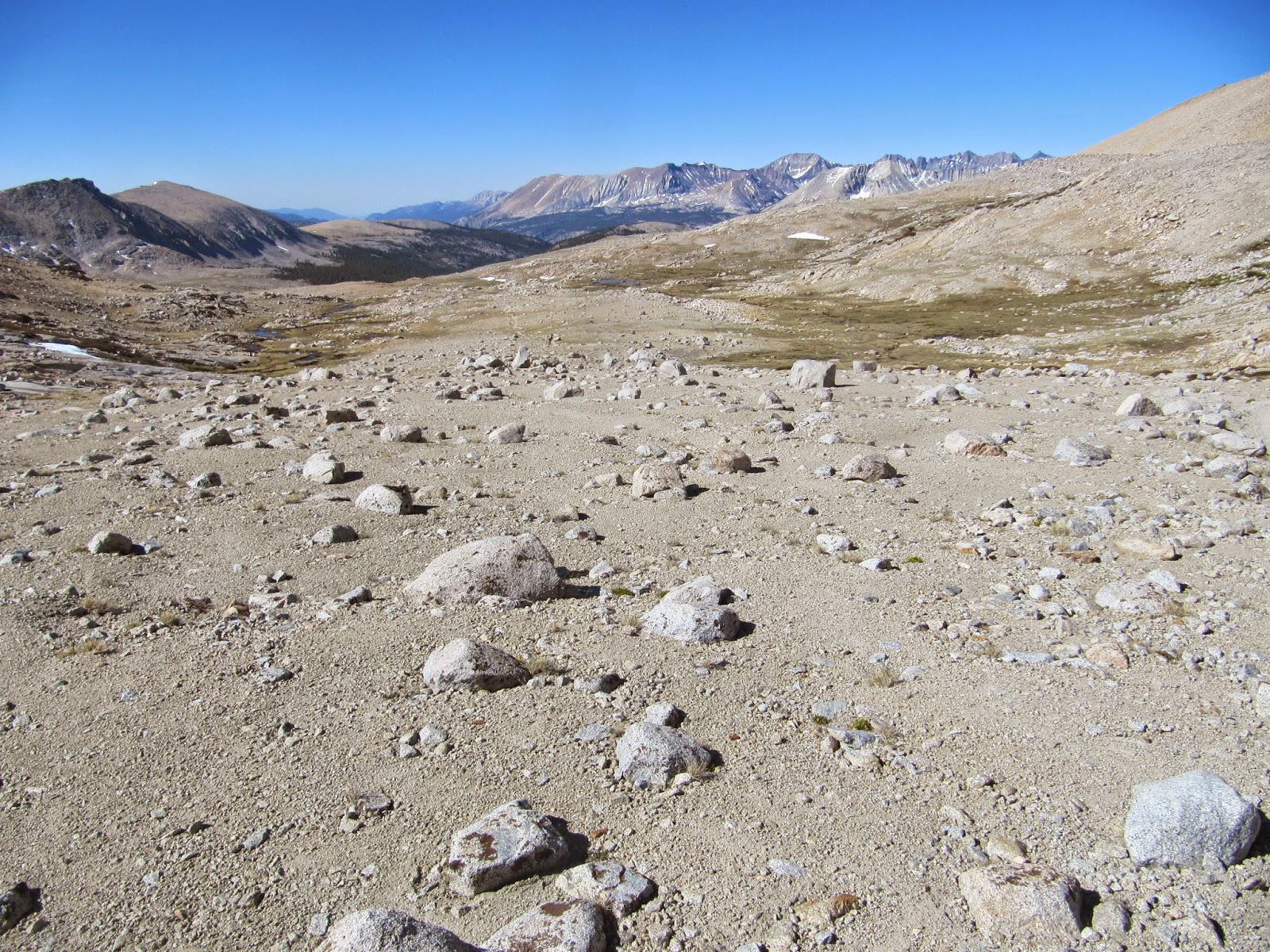 Above treeline, the approach to Forrester Pass is strewn with barren rock. The pass is somewhere in that Granite wall in the far distance. 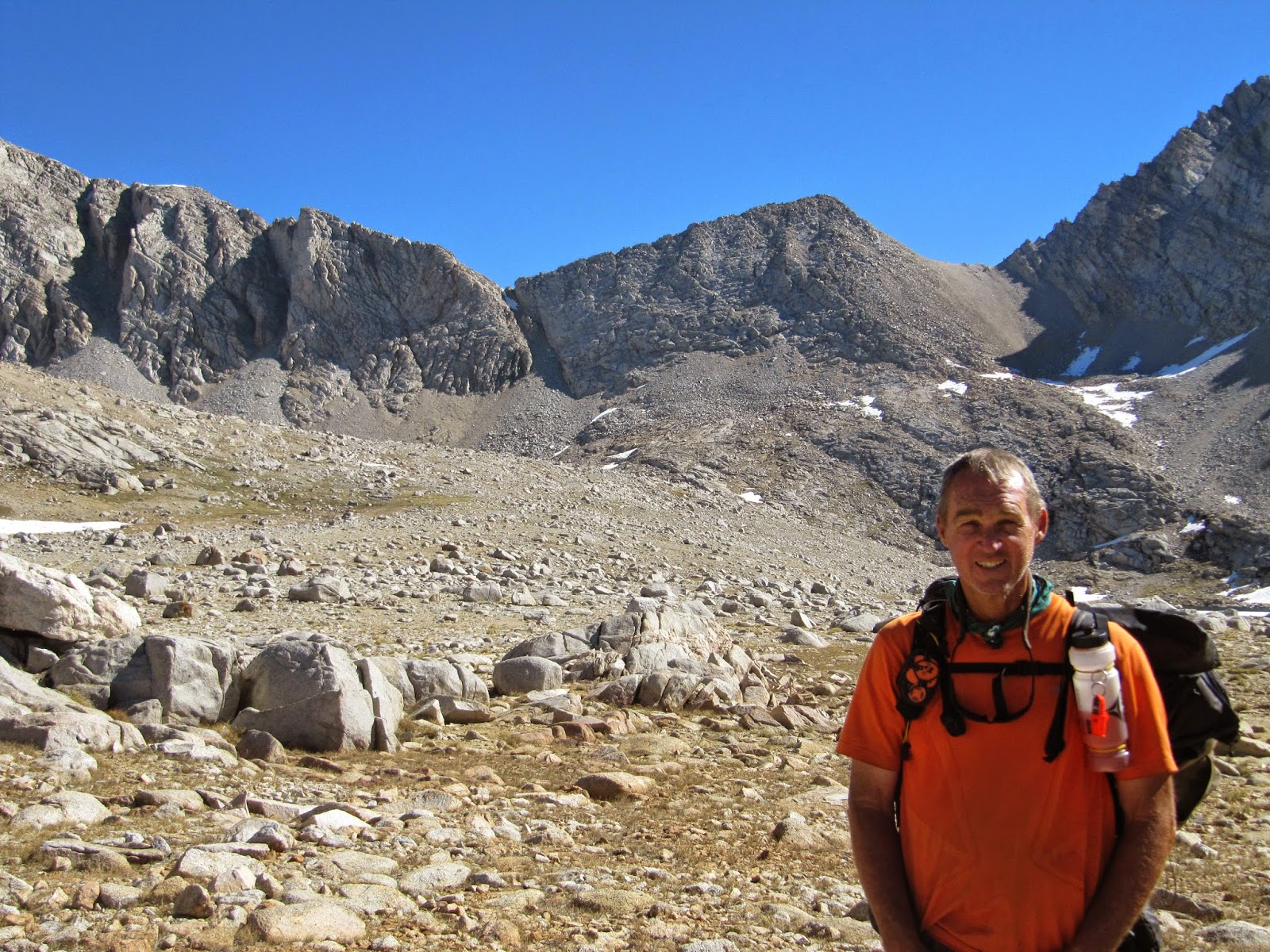 Now that I'm closer to the Granite wall, Forrester Pass, which is in the notch in the center of the picture comes into better focus. 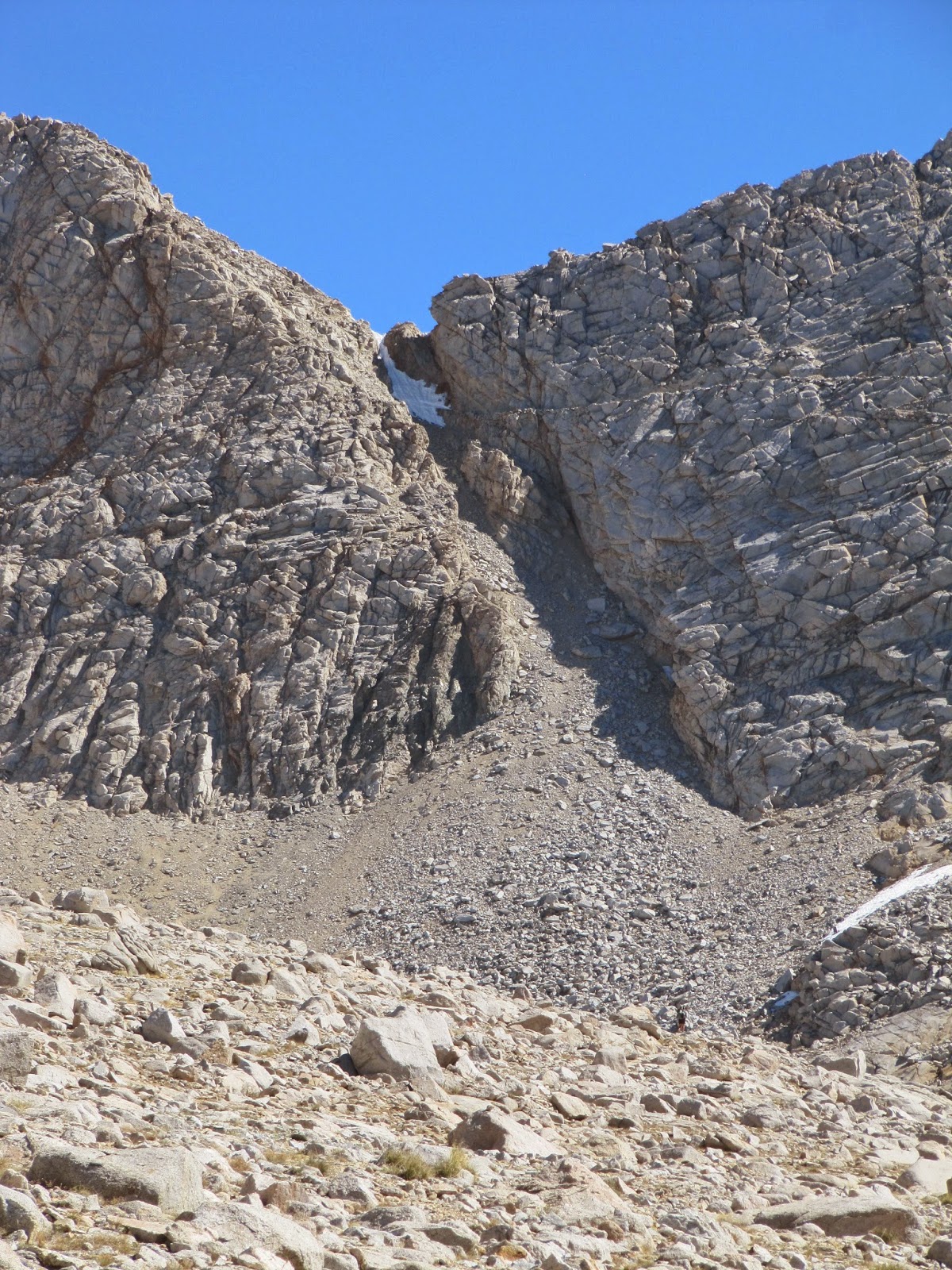 The trail crosses the patch of snow at the top of the chute. 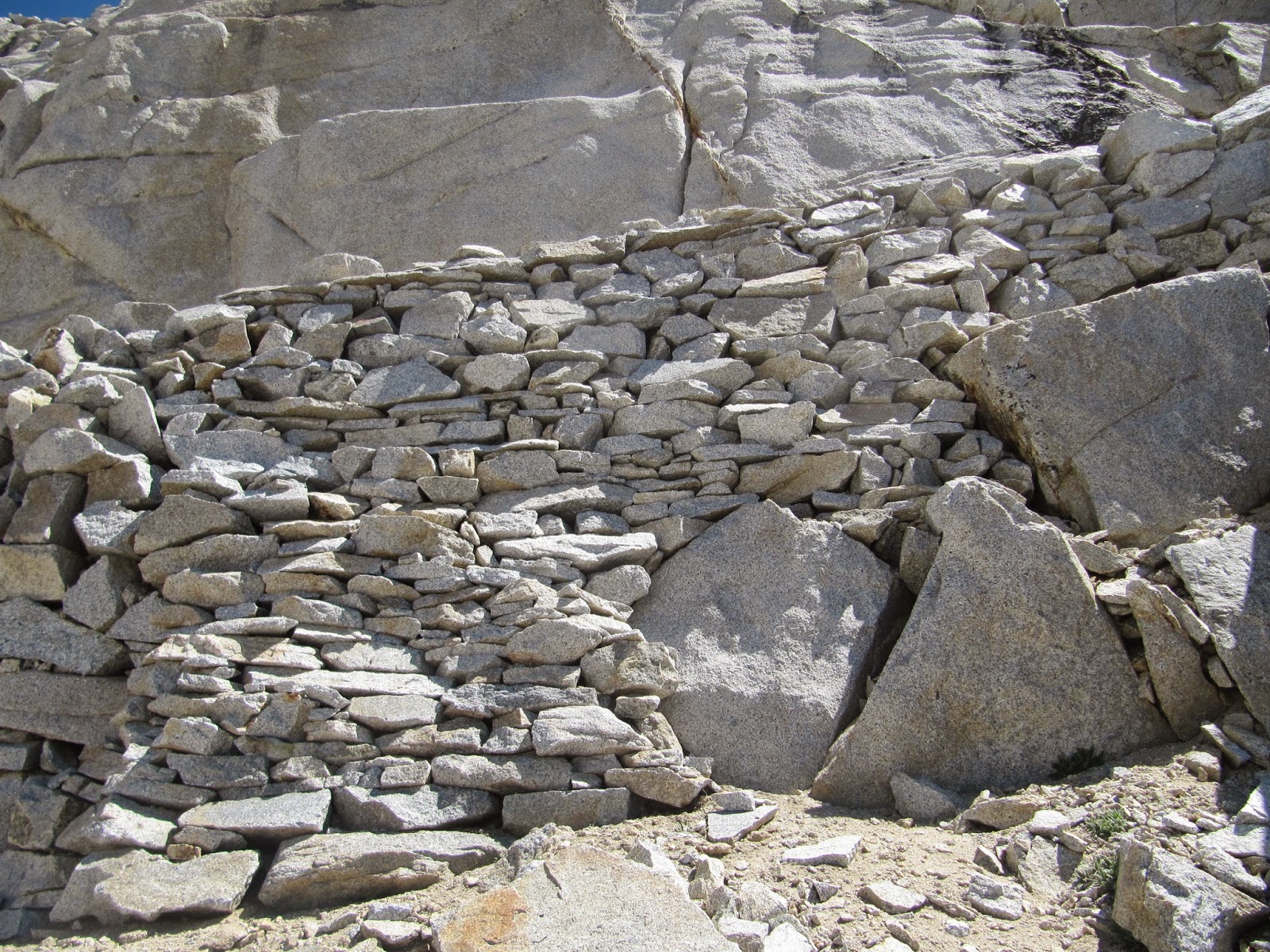 The trail up and over Forrester Pass is well defined. 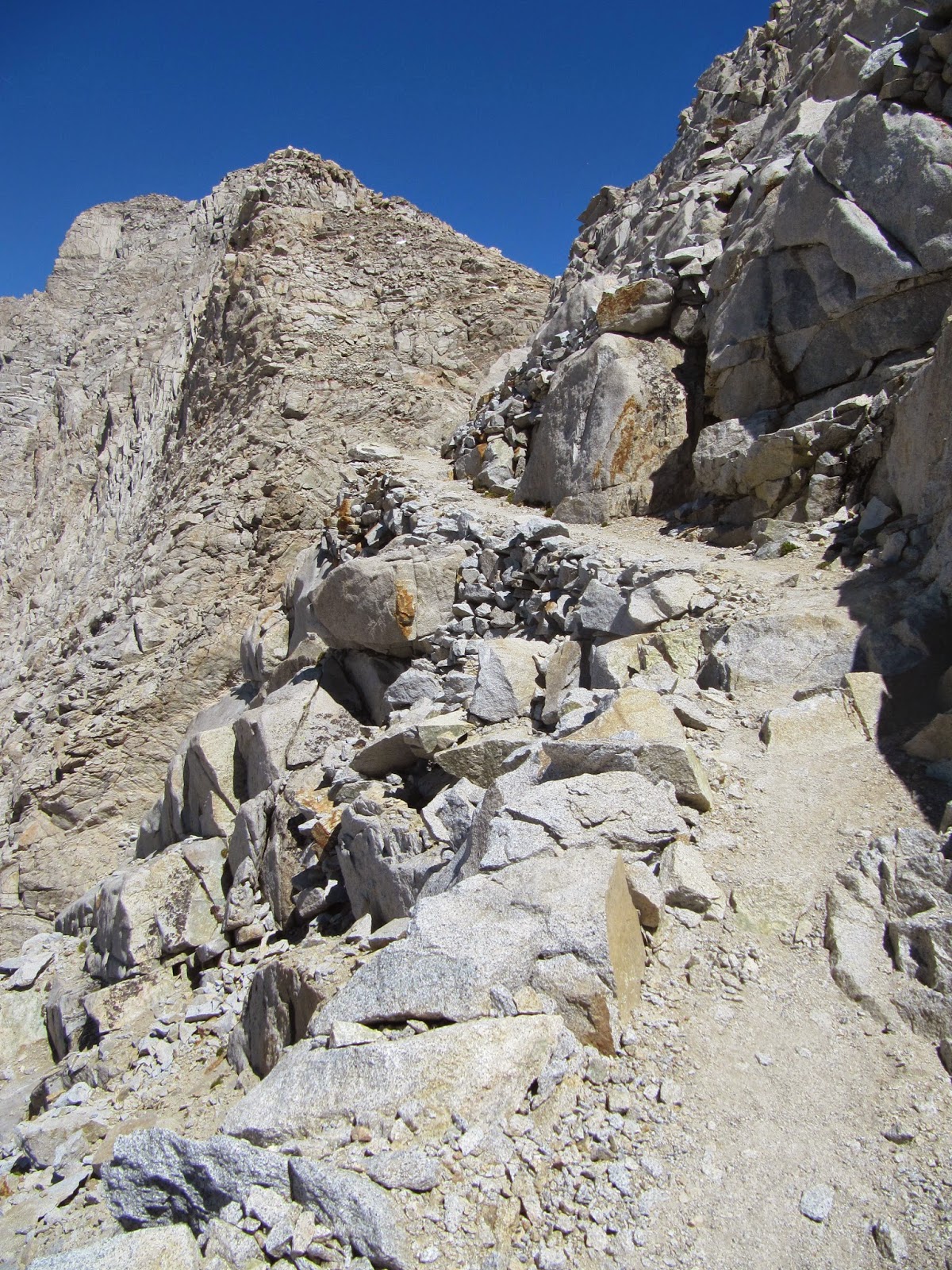 When this section of trail was constructed, it was built wide enough to accommodate pack animals. 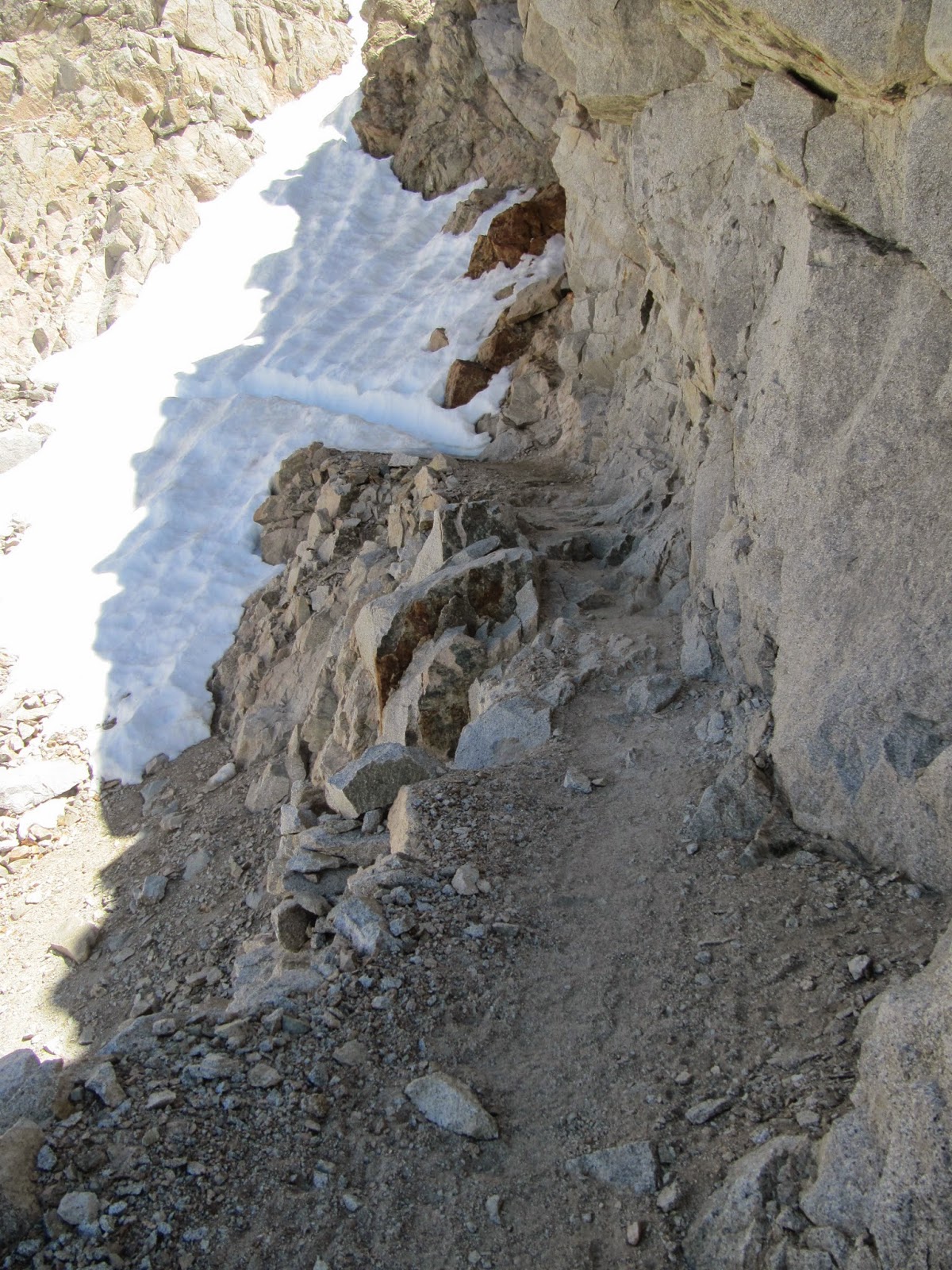 The snow chute with the trail crossing over it. 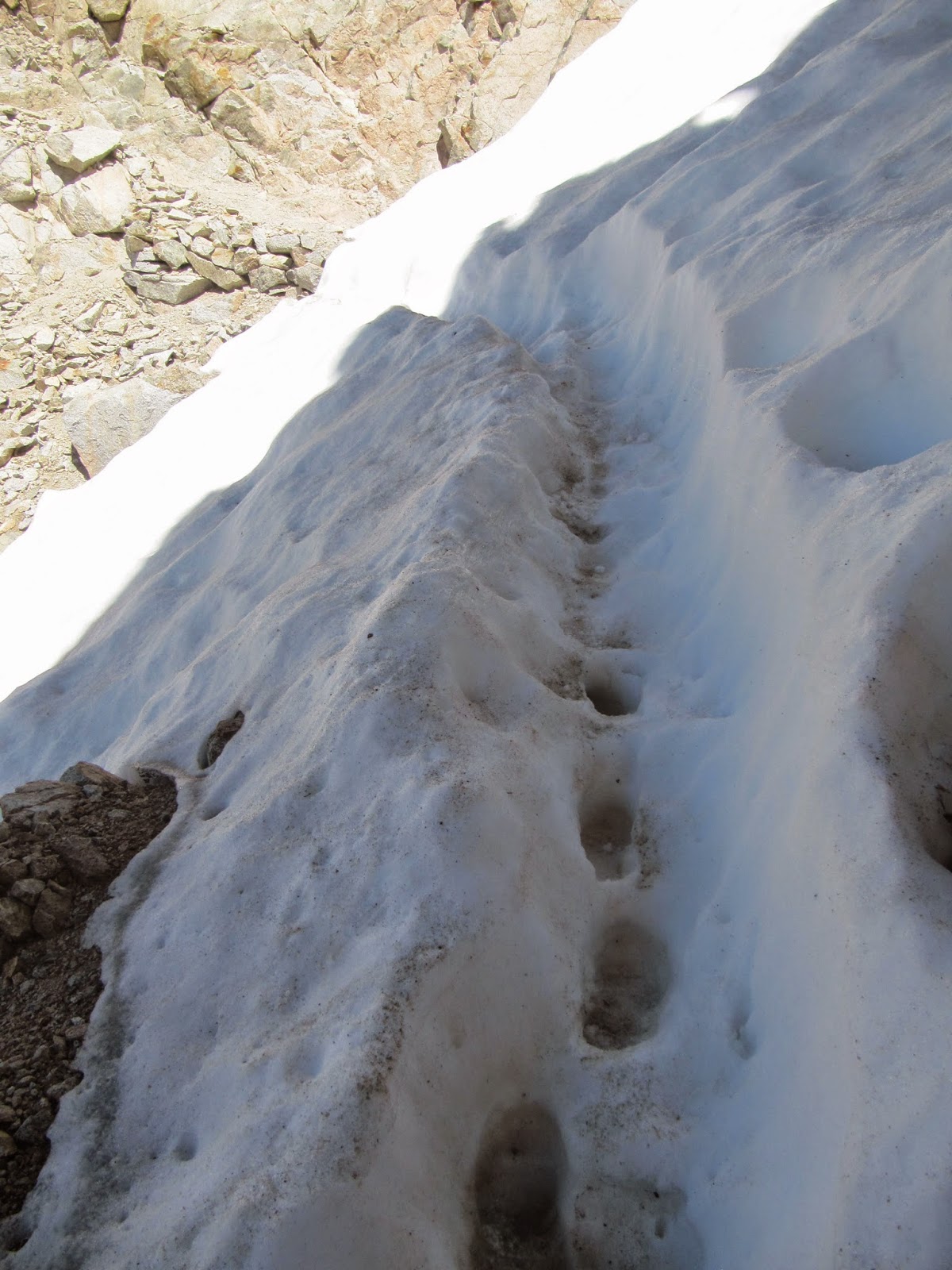 Just place your feet in the steps of those who have gone before; don't look down, and you'll cross safely. 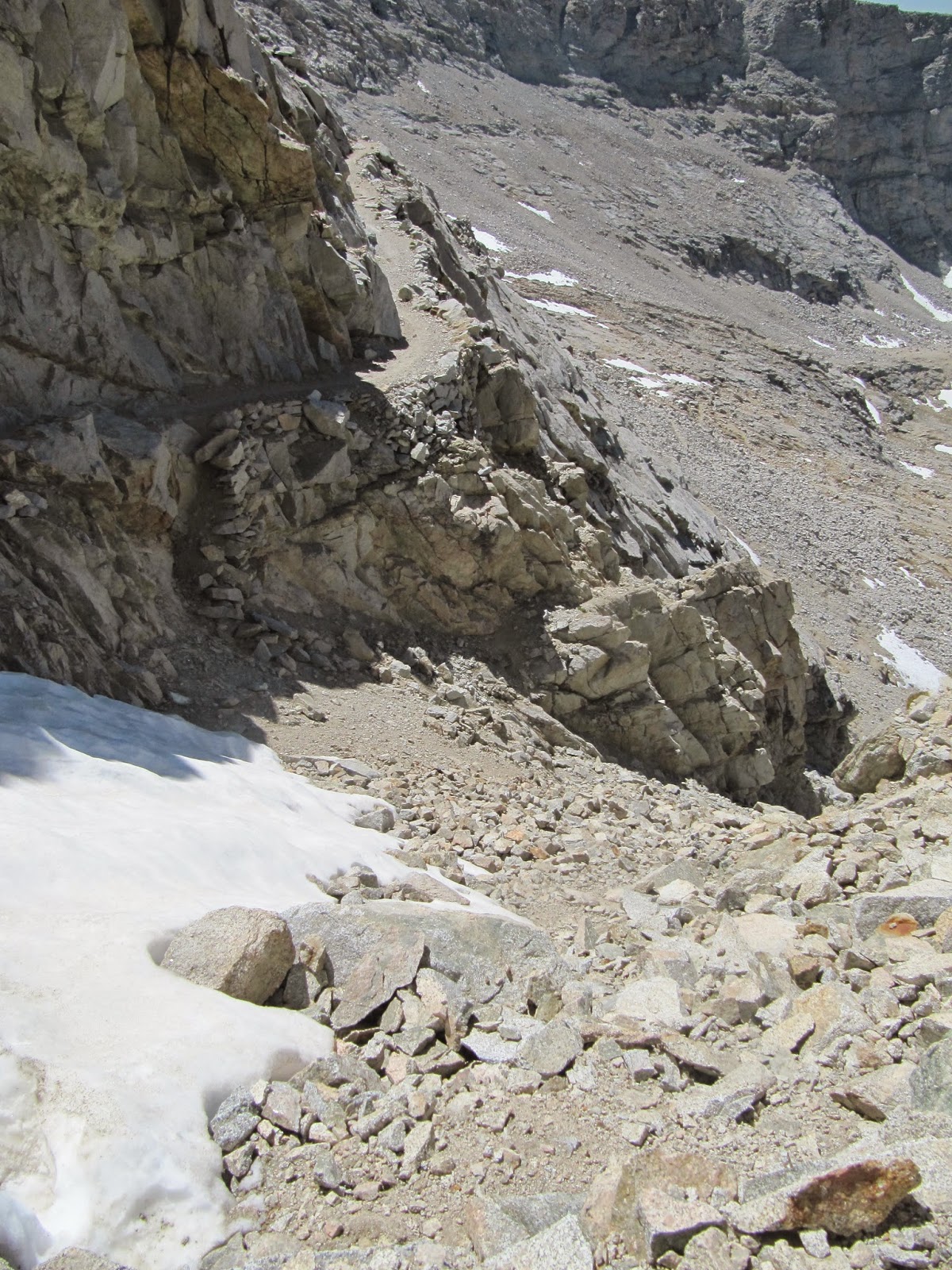 A slip on the ice or snow will send a hiker careening down this chute. In heavy snow years, when the trail is buried under several feet of snow, hikers have been known to climb straight up this chute to summit the pass. 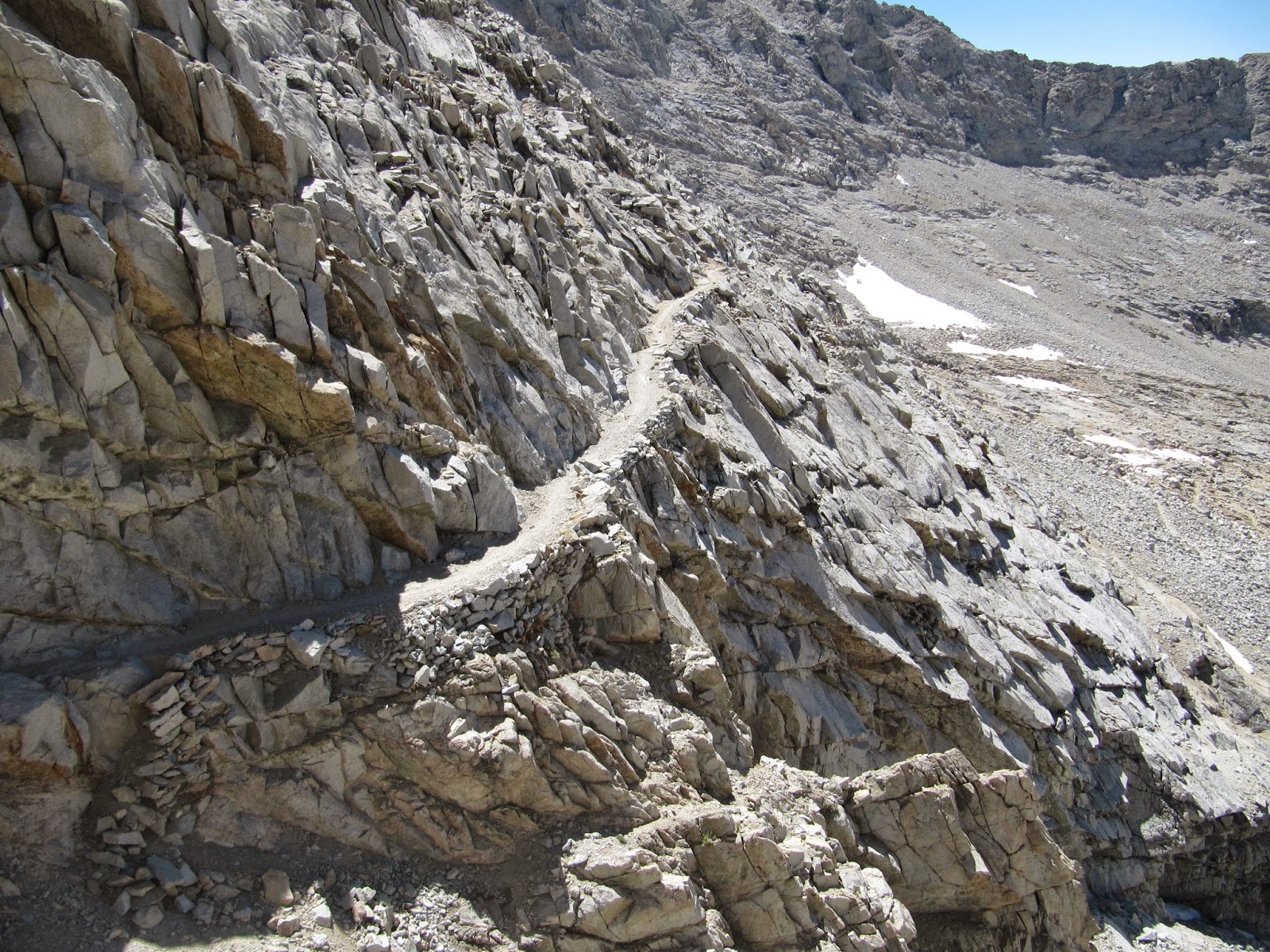 A look back down the well defined trail leading up to Forrester Pass. 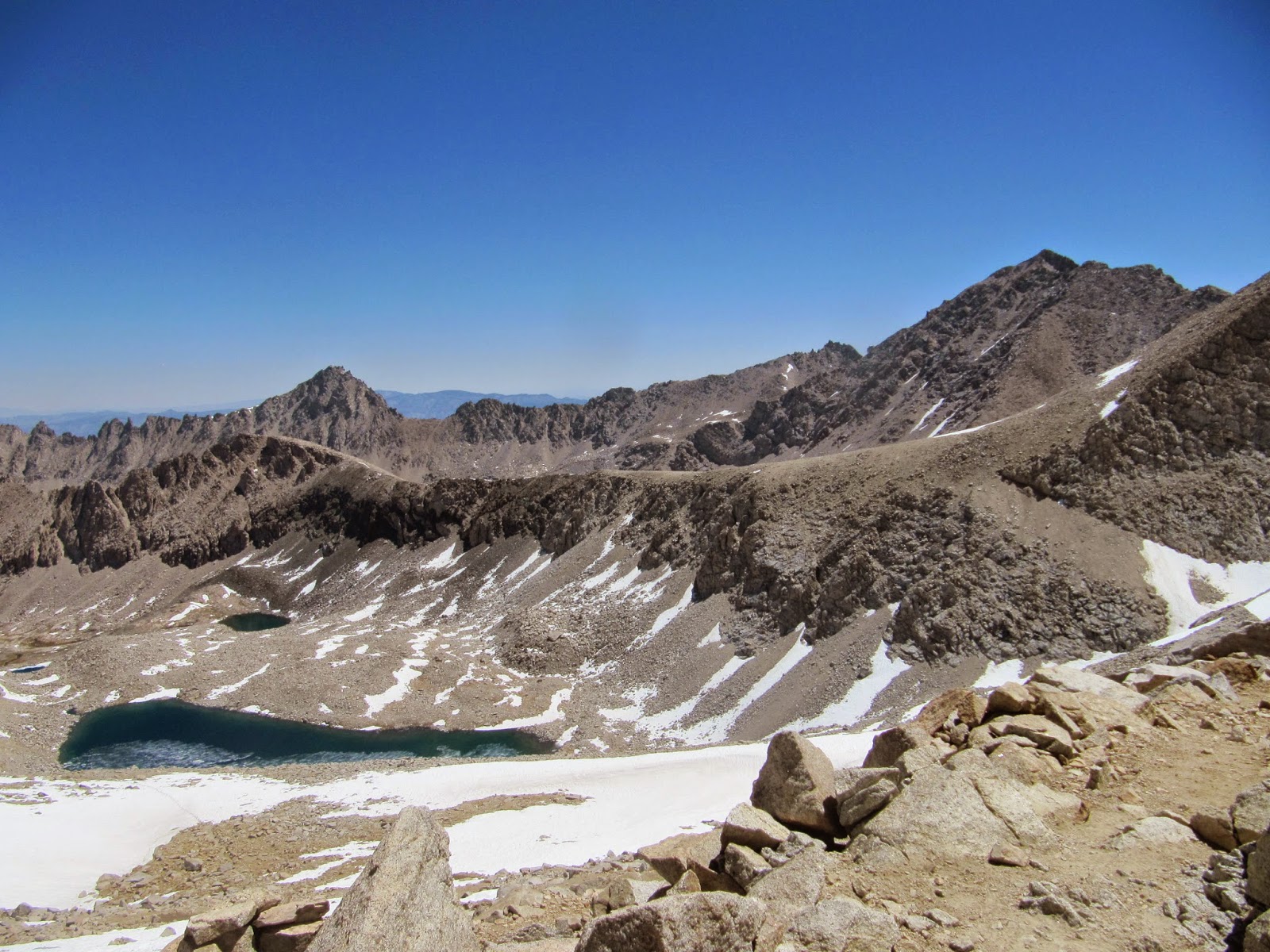 This is the view down the other side of the pass. This is the beginning of King's Canyon. 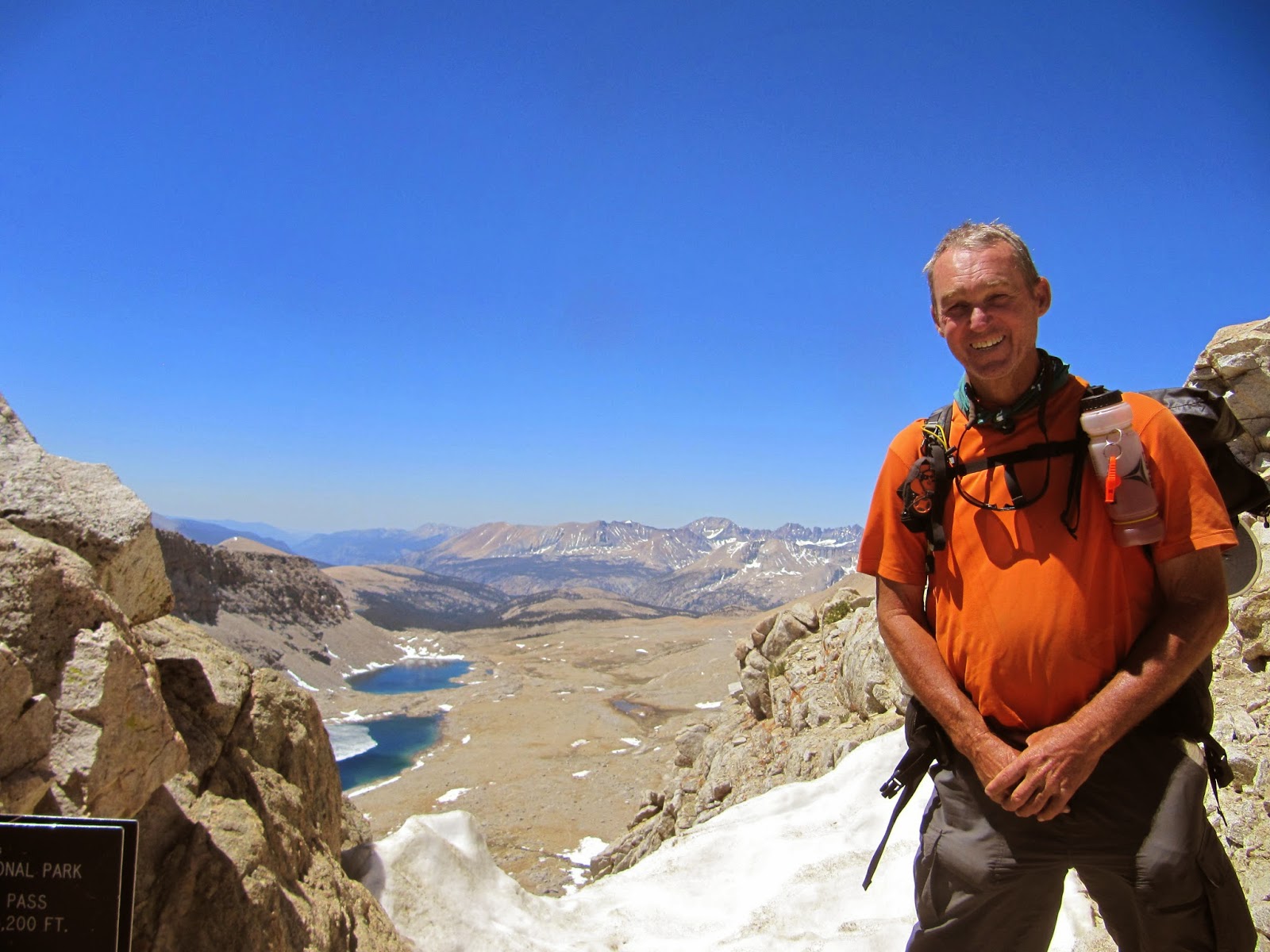 The climb was strenuous and I had to stop often, but I did make the summit by noon, and I celebrated with two peanut butter and jam sandwiches. 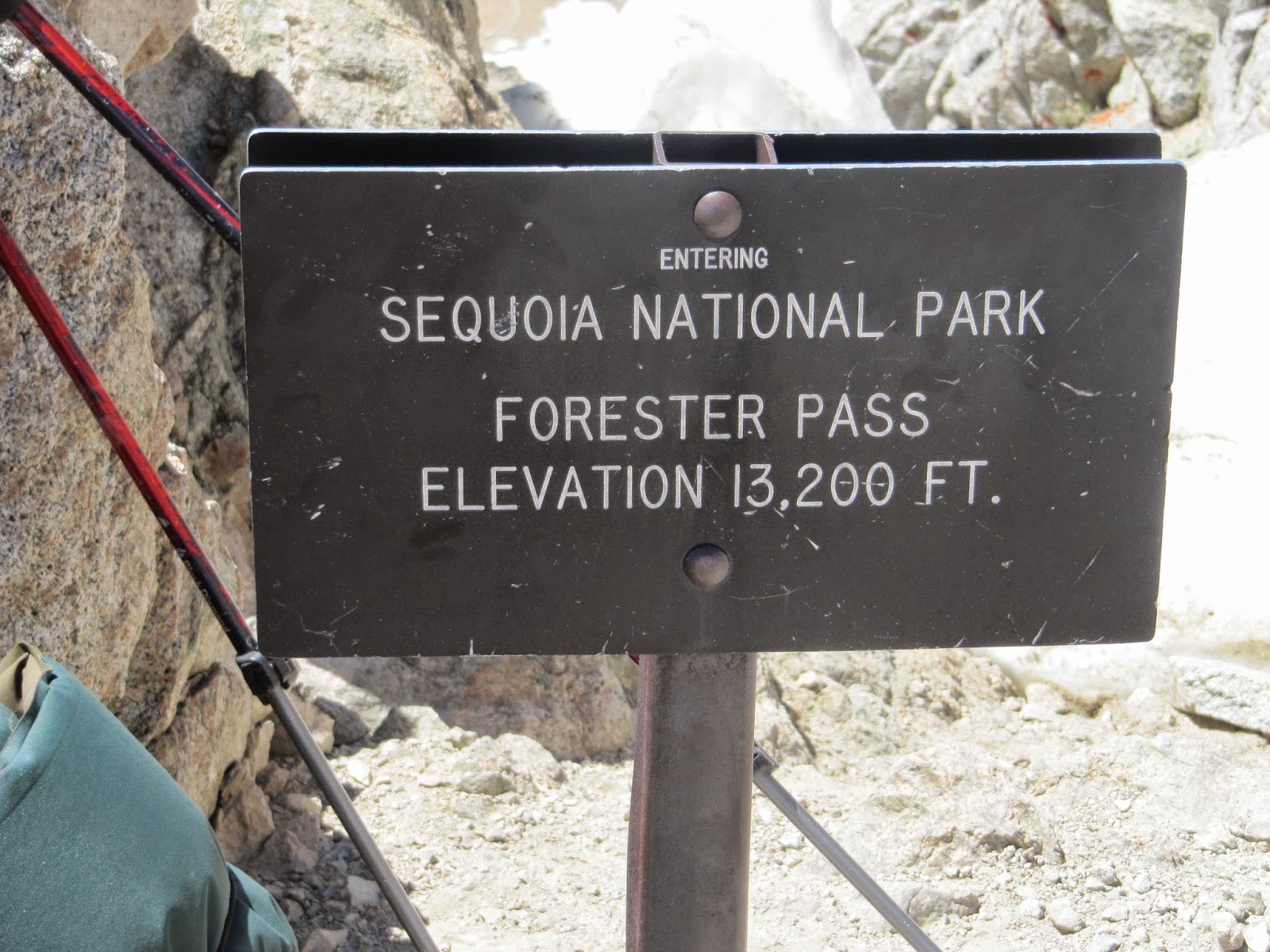 Technically, from this point forward, it's all down hill to Canada.