My journey from today’s camp to Sonora Pass would descend twelve hundred feet in elevation, which was a welcomed relief from the constant uphill grind of the last few days, but of greater interest was that the geology of the landscape was changing dramatically.  I actually passed a point where the granite structure of the Sierras disappeared into the ground, or appeared depending on the direction of travel, and were superseded by rock formations that were volcanic in nature.  The transition was so stark that I had to stop and take several photos of the two geological formations abutting up against one another.  Whereas before, the footpath had been littered with chunks of granite stone, now I was walking on volcanic tuff.  I think it’s safe to say that at this point, the Sierras had come to an end.

At three in the afternoon, I connected with Highway 108, but just before crossing the highway, I found a handwritten note laying in the trail that said, "Trail Magic, straight ahead in parking lot."  I didn’t waste any time hustling across the highway and making my way up to the trailhead parking lot where I found a virtual luncheon buffet laid out on tables, and a dozen or more hikers sprawled on the ground, or resting on their Z-foam pads, eating food, drinking a beer, or just relaxing in the warm sun.

I recognized most of the hikers by sight and even remembered their trail names.  It appeared there were two different groups of trail angels who have set up camp here to provide trail magic food for tired and hungry hikers.  I unbuckled my pack and leaned it against a tree, then went to inspect what was left of the luncheon buffet.  There was plenty to choose from and I loaded my paper plate with a wide assortment of salads, meats, cheeses and fresh fruits, and stuffed a couple of soda pops in my pockets before returning to the picnic tables.

The big topic of discussion among the hikers was how everyone had fared during the massive storm we just lived through.  From the conversations, I learned that the hiker Bipolar had become so hypothermic that other hikers had to help him down the trail to the pass, stand out in the highway to flag down a car, and virtually demanded that the driver take him to a hospital, or at least a motel in Bridgeport where he could get warm, and have a chance to raise his body temperature.

In talking to Bipolar later on, he said that the driver had taken him to a motel, where he checked in; he then filled the tub with hot water and spent the entire night in the tub trying to get warm.  No doubt about it, it had been a serious storm, and I was very grateful that I had my air mattress to lay on, which kept me elevated above the water in my tent.

Just before leaving the parking lot to hitch into Kennedy Meadows North, a bright green, vintage VW bus pulled into the parking lot.  I later learned that the older couple in the bus was WeeBee’s parents – whose trail names are Kermit and June Bug.  They also had come to provide trail magic and were giving support to their daughter, WeeBee.  I would meet them four more times along the trail, all the way to Washington as they continued to provide trail magic to hikers, and each time, it was like meeting old friends.

My assessment of the section I had just hiked through – Tuolumne Meadows to Sonora Pass, was that it was one of the most scenic and picturesque segments of the Pacific Crest Trail I had yet encountered.  If I were asked to suggest an area of the trail to hike for a week, without hesitation, I would recommend this seventy-five-mile section of the trail.

An hour later, I was standing beside the road trying to hitch a ride into Kennedy Meadows North.  On the other side of the road, Biers, Ranch, Pia and her friend, Tea Bag, were trying to hitch a ride in the opposite direction, towards Bridgeport, some thirty miles to the east. After a long wait, I succeed in catching a ride, and the driver delivered me to the doorsteps of the lodge/convenience store.  Kumquat and Tour Guide were there also, and together the three of us sorted through our resupply boxes on the back porch of the lodge.

Kennedy Meadows is summer grazing land for cattle, and this was the time of year when the cattle were being trucked in to the summer range; subsequently, there were a lot of cowboys in and around the lodge.  They were decked out in their working clothes – boots, spurs, long-sleeve shirts, big, big hats, and for those who were old enough, long moustaches, curled up at the ends.  It was delightful to watch the really young boys – ages twelve or younger, strut across the open grounds surrounding the lodge in their boots and hats, trying hard to imitate their fathers or older brothers.

Kumquat, Tour Guide, and I had dinner together – standard hiker fare – fries, hamburgers and milk shake, and then headed up the road back towards the highway to find a place among the pine trees to set up camp.  I camped away from the other two, as I knew I would be on the road early. 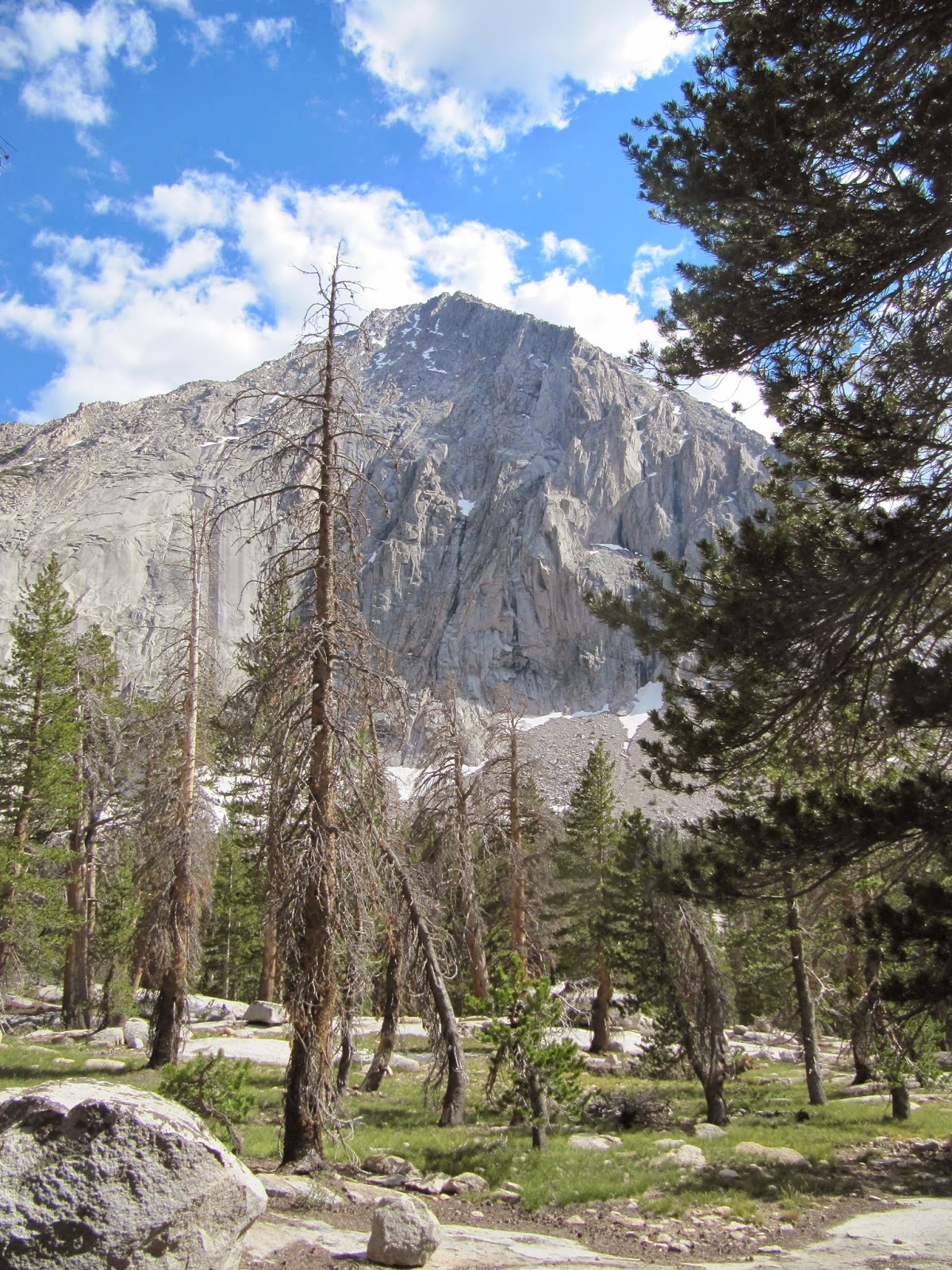 The grandeur of the Sierras.