During the night, water leaked into my tent, but using my neckerchief, I’m able to sop it up and wring the water out of the neckerchief on the outside of the tent.  Having an inflated air mattress to sleep on elevated me just enough to keep my sleeping bag from soaking up the water, which would have been disastrous.  I wouldn’t have been able to stay dry and would have suffered from hypothermia.

Around 10:00 a.m., I peered out of my tent just as four hikers were passing by.  They were decked out in rain jackets and had rain covers over their packs.  I felt a little guilty being in my tent, but dang it, it was still raining and somewhat cold outside.  I determined to stay in my tent and sleeping bag until at least 1:00 p.m. and then take my chances.

It was one in the afternoon and I had been in my tent for twenty-four hours straight.  I determine to leave – rain or no rain.  I slipped on my rain pants and wet North Face jacket, laced up my soggy wet shoes, and popped out of the tent.  What rain was still falling was mostly drip from the trees I was standing under.  As quick as I could, I stuffed my belongings into my pack, rolled up my wet tent and stuffed it in its stuff sack and strapped it on top of my pack, and headed up the trail.

For the most part, it had stopped raining, just as Russ had said it would, and yes, overhead, blue sky was starting to appear.  Within a mile, I passed the four hikers huddled in their tents who had passed by my me at ten this morning; I guess they figured it wasn’t worth the effort to try and make miles in the rain.

Kumquat and Tour Guide were also camped nearby.  They each had their own one-person tent, but during the night, Tour Guide’s tent became flooded with water, soaking his sleeping bag, so he crawled in with Kumquat.  Two people in a one-person tent, plus backpacks, was more than just a little crowded.  The two of them had been in the tent since three this morning.  I bid them a hearty farewell and moved on
.
The trail followed the west bank of Falls Creek, which was flowing at least three times its size from the previous day.  I knew there were stream crossings behind me, but I didn’t know what lay ahead.  I just hope I wouldn’t have to cross the raging stream that was roaring down the canyon, off to my right.  Water was flowing everywhere; even the trail itself had become a mini-stream, funneling water from the flat meadows to roaring Falls Creek.

I passed Pia, who was still in her tent, and shortly thereafter, I was passed by Yashinka who had been leapfrogging the trail with me since Kennedy Meadows.  Knowing that he was camped across the stream from where I spent the night, I asked him how it was to cross the stream in flood stage.  He said it was over waist-deep, hard to cross, and very treacherous.

The climb continued upward until Dorothy Lake came into view, and as I was standing beside it I turned around and looked back down the valley at the massive gray clouds that were still being pushed up the valley and over the mountaintops on either side of the valley, where they dissipated.  The storm was over with, but it had been a good one.

Ahead of me was a summit called the Sierra Crest, which was located at 10,640 feet, still a major climb of approximately fifteen hundred feet.  Beyond Dorothy Lake, the trail crossed Cascade Creek and then followed the West Fork of West Walker River.  With the thirty-plus hours of rain the landscape has just endured, the West Walker River was bulging at its banks and the trail, according to my maps, had to cross over it.  Fortunately, there was a steel bridge over the gorge that contained the river, and I passed over without incident and moved on to Walker Meadows.

The long valley that I had been climbing up all afternoon now culminated in the fifteen-hundred-foot climb along an exposed alpine traverse that was part Jeep road and part horse trail. Standing at the base of the climb, I could see it is a long, long traverse that eventually went up and over the Sierra Crest, and all of it was above tree line.  I began the climb; the going was slow; I moved along counting units of eight steps, and made progress up the slope.  Halfway across the traverse, I looked back and saw other hikers just beginning the climb.  My honest hope at that moment was that I would be able to make it to the top and start down the other side before they caught up with me.  I did so, and throughout the rest of the day, I saw no other hikers.

I hiked until 8:30 p.m. and then camped for the night at mile 1,003.  I was pleased with my progress; I had only 1,660 miles left to walk until I reached the Canadian border.  As I contemplated my progress thus far, I found it hard to fathom that it was possible to hike such a long distance.

My feet hurt, but not from blisters; just the constant pounding of walking seventeen to twenty miles a day.  What really hurt was my back, specifically the muscles on either side of my spine.  I had to assume the pain was the result of an ill-fitting backpack, for I found myself constantly adjusting the straps to either lift the pack higher up on my back, or lower it in an effort to gain relief from the pain.  A particular adjustment would give me relief on one side of my back for a few miles, and then the pain would start in again.  I was taking a lot of Ibuprofen and Advil, which only brought relief for a little while.

I didn’t think it would rain last night, and it didn’t, but I put my tent up anyway to get some relief from the mosquitoes.  I was only thirteen miles from Sonora Pass and Highway 108 that lead west to Kennedy Meadows North and my next resupply box.  The day was not total sunshine; storm clouds still lingered, but the three-day storm just endured had spent its fury and milder conditions now prevailed. 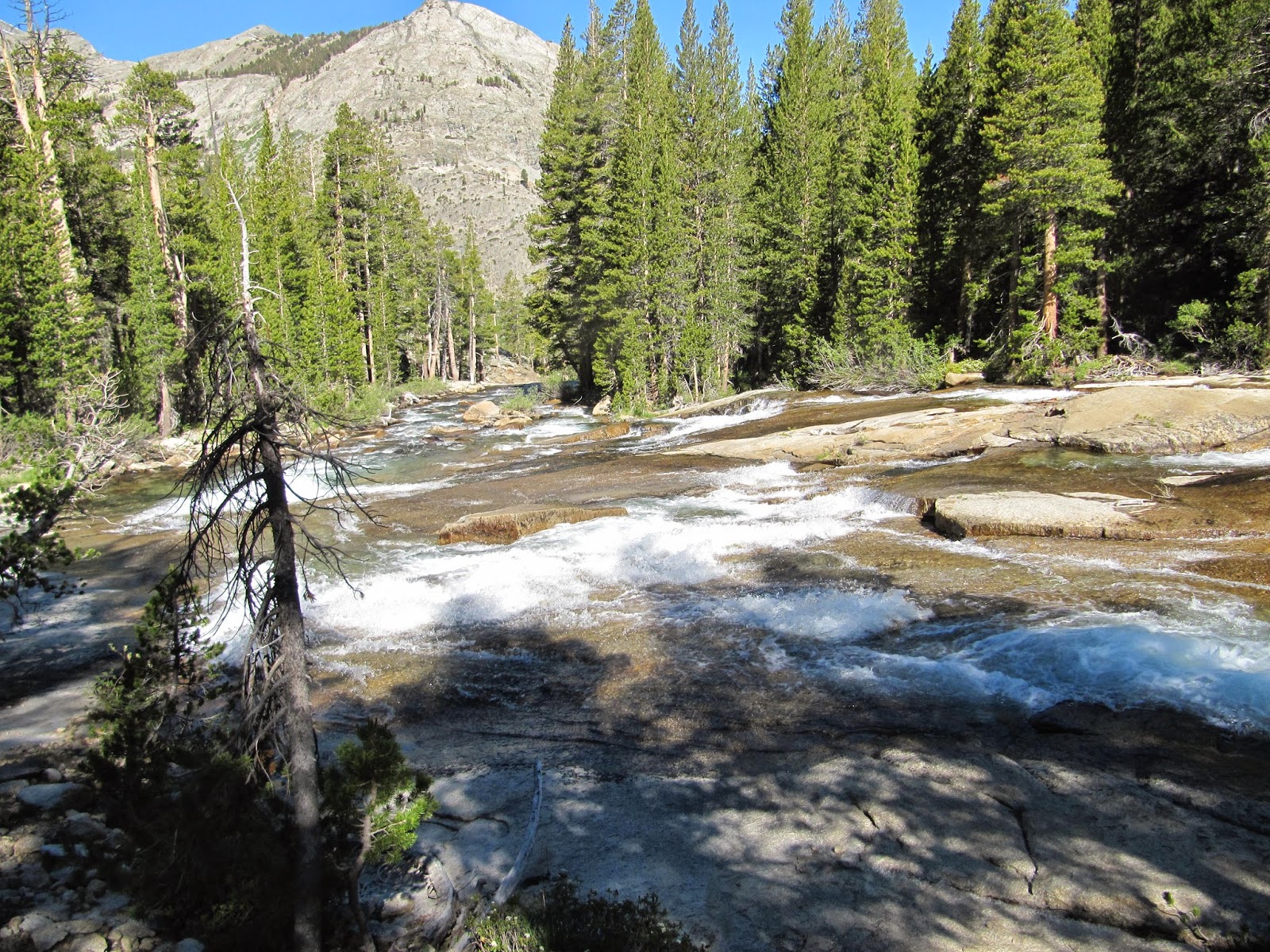