Part 62 - Wide meadows of the Kern

It was déjà vu as I walked along the paved road towards the Kennedy Meadows Campground and beyond to the bridge that crossed over the Kern River.  This was as far as I ventured last year when I set out to walk to I-80 over Donner Pass – 450 miles distance.  A year had passed and I had walked seven hundred miles getting to this point; was I any better prepared now than I was last year?

Certainly my legs were stronger, and they would carry me anywhere I wanted to go, but the pack was just as heavy, and I still had to stop and rest, but maybe not as often as last August.  All told, I’d like to think that I was in better shape and in better condition than during last year’s attempt.

The trail followed alongside the Kern River, and numerous campsites and swimming holes abounded.  It was way tempting to want to stop and play in the water, but Canada called.  Eventually the river turned to the right and headed through meadowlands, only to reappear six miles later, where a steel-arched bridge spanned the shallow waters of the river.  In the summer, the Kern was slow moving and shallow and a bridge would normally not be necessary, but that would all change when the snow melted and the river became a raging torrent, making a crossing extremely difficult and dangerous.  The Forest Service built this bridge in 1986.

Sitting on the grass next to the river, was Bree and her sister, Jessica, the two sisters from Montana who had their resupply packages pilfered.  As it was lunchtime, I asked if I might join them, to which they readily agree.  In conversation, they acknowledged that the contents of their resupply packages were looted, and although an inconvenience, they said they were still able to find resupplies at both trail towns Lone Pine and Ridgecrest
.
My lunch this day would be a prepackaged tuna fish sandwich mix, spread on a ten-inch tortilla shell, plus a handful of Mother’s brand animal cookies, and some Frito-Lay chips.  After washing my legs and feet in the river, I pushed on, saying good-bye to the girls.  They were resting in the grass, cooking their meal, and reading from tablets.  In a few miles, they will pass me, so they can afford to relax.

This section of the PCT was noted for its wide-open spaces created by numerous meadowlands.  Before the day was over with, I would pass Beck, Clover, Brush and Monache Meadows, with Monache Meadows being the largest meadow in the Sierras.  The trail hugged the hillsides to the east, giving me an expansive view of the meadowlands to the west.  I saw structures that appeared to be cabins with corrals and multiple four-wheel-drive roads that crisscrossed the meadows.

The guidebook said that Jeeps first entered these meadowlands in 1949, but that horse and buggy carriages were here long before that.  (Schifrin, pg. 277) The most prominent peak in the vicinity of the trail and meadows was Olancha Peak that I encountered at about mile 720.  The peak is 12,123 feet, and for young bucks that are peak bagging, it’s only a 1,550-foot climb to the top.

My goal for the next few days of hiking was Crabtree Meadows – the gateway to Mount Whitney, the highest peak in the lower forty-eight states, with a height of 14,491 feet.  I had sufficient food in my bear vault for seven days of travel, which would get me to my next resupply point at Independence, California – eighty-five miles distance.  And although I had the food to go longer, I hoped to be in Independence in five days, which meant I needed to average seventeen miles per day. 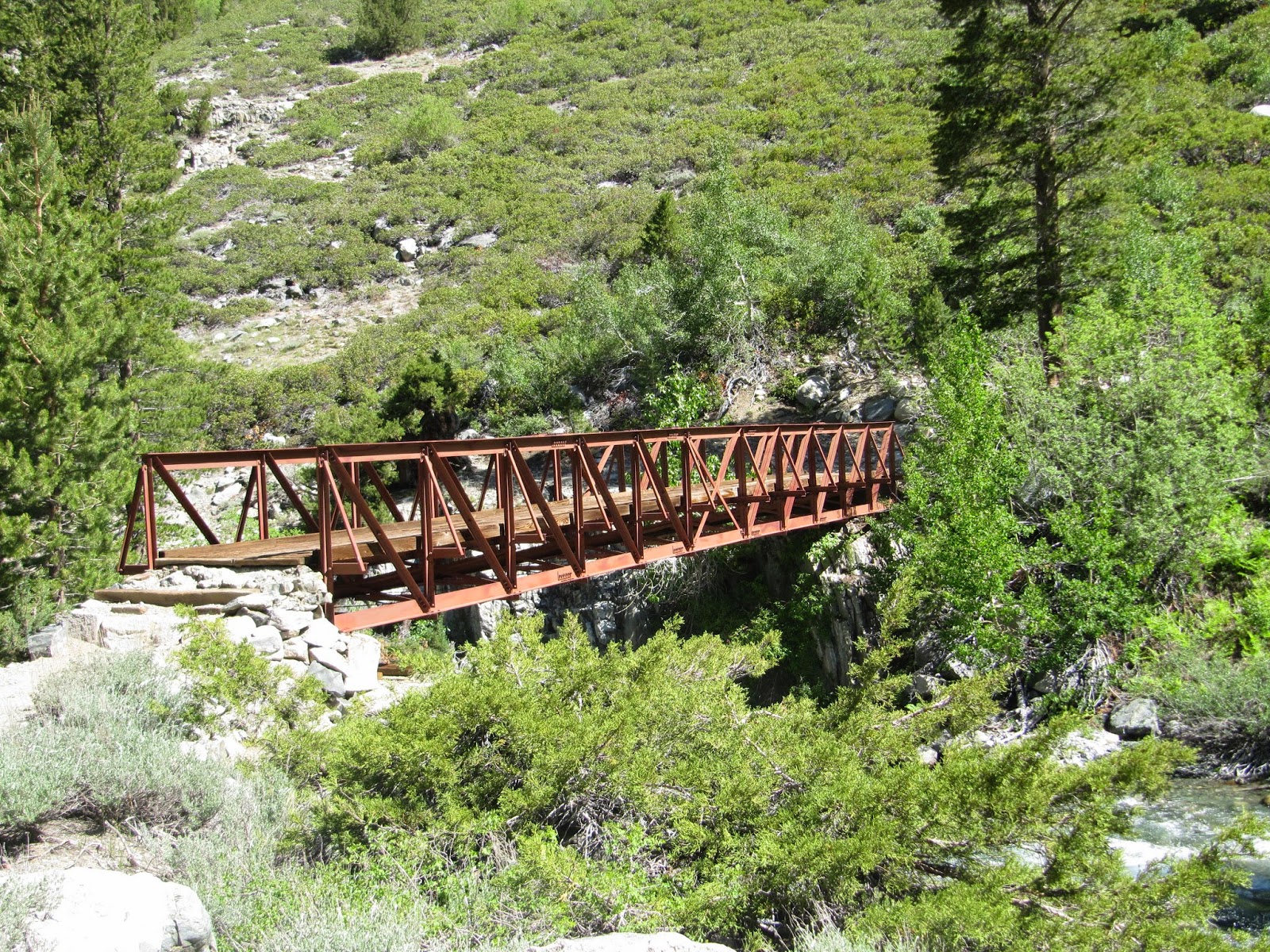 The first bridge over the Kern river after leaving Kennedy Meadows. This is as far as I hiked on my pre-trip in 2012.