River running had its trying moments; ocean rowing had it terrifying moments; I almost lost my son to an auto-bicycle accident on our bike ride across America.  Today, my nemesis was Forester Pass.  I could not see it from my campsite; it was still some seven miles distance, but its reputation as the most challenging High Sierra Pass to summit had intimidated my thinking for over two years.
The approach to it was several miles long, and when covered in two to three feet of snow, it was impossible to find and follow the actual trail; and, if the snow were soft, then that meant miles of postholing.  (Translated:  Punching through the snow to various depths with one’s legs, sometimes waist deep.)  Crampons for the boots and an ice axe for self-arrest in the event of a fall on the icy slopes were recommended safety items for this ascent.  I had crampons in my pack, but left the ice axe home.

I left camp early this morning and made a safe crossing over Tyndall Creek, another treacherous stream crossing when the water was high.  As I climbed higher, the trail skirted around moraines of rock and dirt, leftover remnants of the Wright Creek glacier that gouged out the U-shaped valley which I was ascending.  A few hundred feet higher I reached the top of the Bighorn Plateau and the beginning of a two-thousand-foot climb to Forester Pass.

The view from the plateau was stunning.  To the north, at the far end of the basin, numerous peaks jutted up from the valley floor, looking like the jagged, steel teeth protruding from a hiker’s crampon.  They formed a solid wall of gray-granite rock, capped with snow that glistens in the morning sun.  The wall appeared to be impenetrable; indeed, what were the trail builders thinking when they routed the John Muir Trail into this region of the Sierras; how did they hope to scale it?

By 10:00 a.m. I had covered four miles and only had another three to go to reach the summit.  From my vantage point on the trail, I could see the notch, like a gun-sight in the granite wall, over which the trail passed.  I was too far away to see how the trail was carved into the side of the granite mountain, but I was mesmerized by the mere fact that it was.  I stopped for a mid-morning snack, and was passed by a young female hiker.

I’d not met her before; she was fast and steady and moved on without stopping for conversation.  I would meet her often on the trail and she went by the trail name of Runs-with-Elk.  An hour later, Bree and Jessica passed me, followed in quick succession by Kumquat, Tour Guide, and Lightning Rod.

It was a gorgeous day for hiking - blue sky, no clouds, and temperatures in the seventies.  The U-shaped valley I was walking through was dotted with several rockbound lakes; their outlet waters flowed from one to another until they formed a roaring stream that surged down the mountainside to the Kern River somewhere off in the distance.  At eleven thousand feet and climbing, I was above tree line, but here and there were patches of foxtail pines, most twisted into grotesque shapes by the mountain winds.

At a turn in the trail, I came upon a hiker who was totally absorbed in composing a picture of a small lake using the granite walls of Forester Pass as a backdrop.  It was a beautiful scene, and I stopped to take a photo of the same elements.  I offered to take a picture of the hiker using his camera and he accepted the offer.  He introduced himself as Daniel Craig with the trail name of OTC.  He said he was given that name by other hikers to distinguish him from the film actor by the same name that played James Bond in 007 movies (OTC = Oh That Craig).

OTC said that he hiked the trail in 1994 – seventeen years ago, during which he took a lot of digital photos that he later posted to his personal website.  He said he has come back to update many of those photos.  He had the original images loaded into a digital camera and when he came to a site that approximated the image taken in ’94, he brought it up on the digital camera to compare with the scenery in front of him.  He said that at times he had to walk around, holding the camera in front of him to find the exact spot where the original picture was taken, and when he got as close as he could to what he thought was the original, he snapped another photo using a higher-quality digital camera.

He informed me that he was the author of the website PCT Planner, a website that helps PCT hikers plan their resupply drops.  I told him I used his site extensively in planning my trip, and that it was a pleasure to meet him.  Unbeknownst to me at the time, OTC would play a vital role in my experience on the trail during the last few miles of the journey before crossing into Canada. 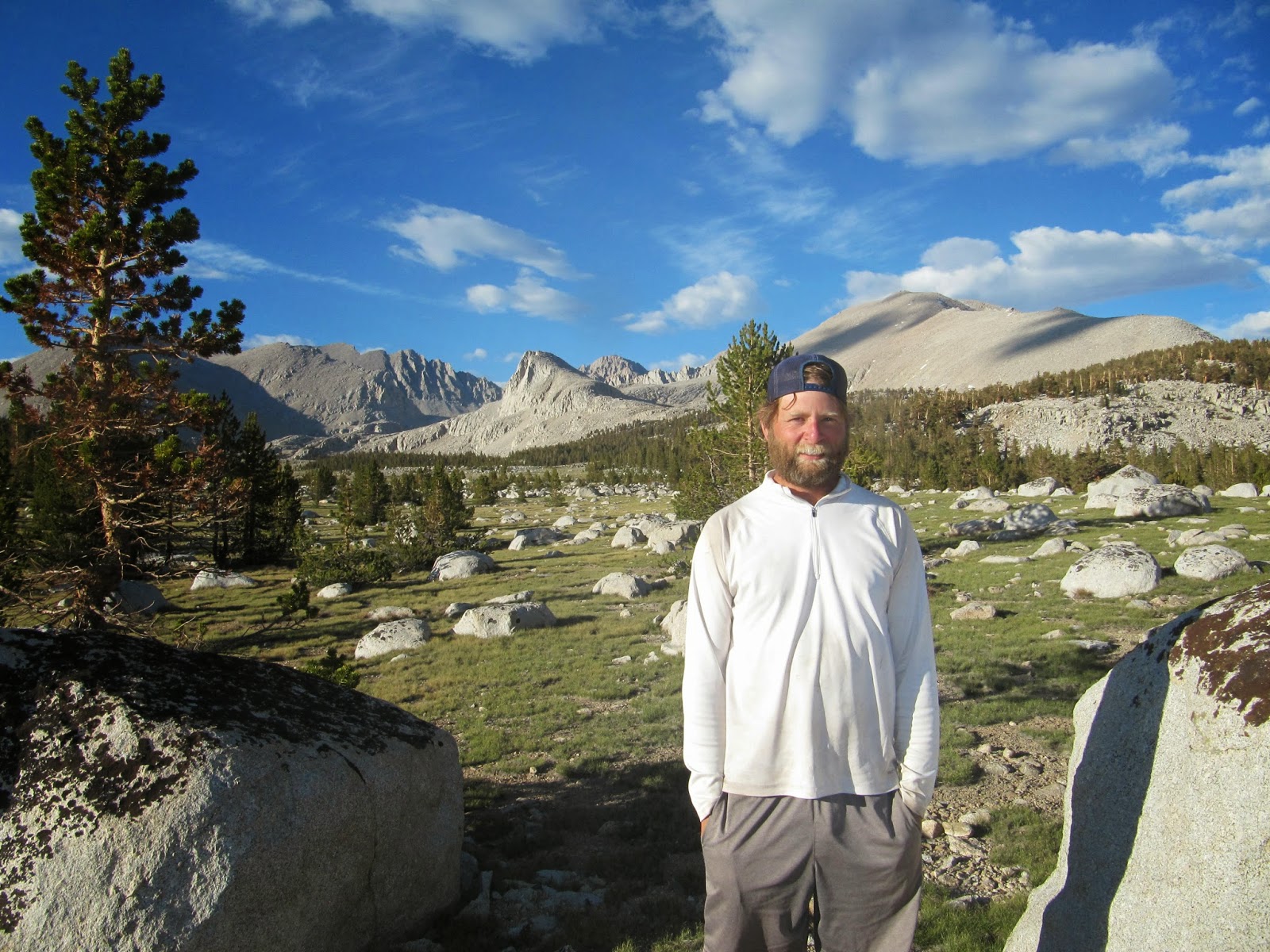 My first meeting with OTC. We would walk together for the last three days of the journey through the snowy North Cascade Mountains, just hours before the trail was shut down by heavy winter snows. 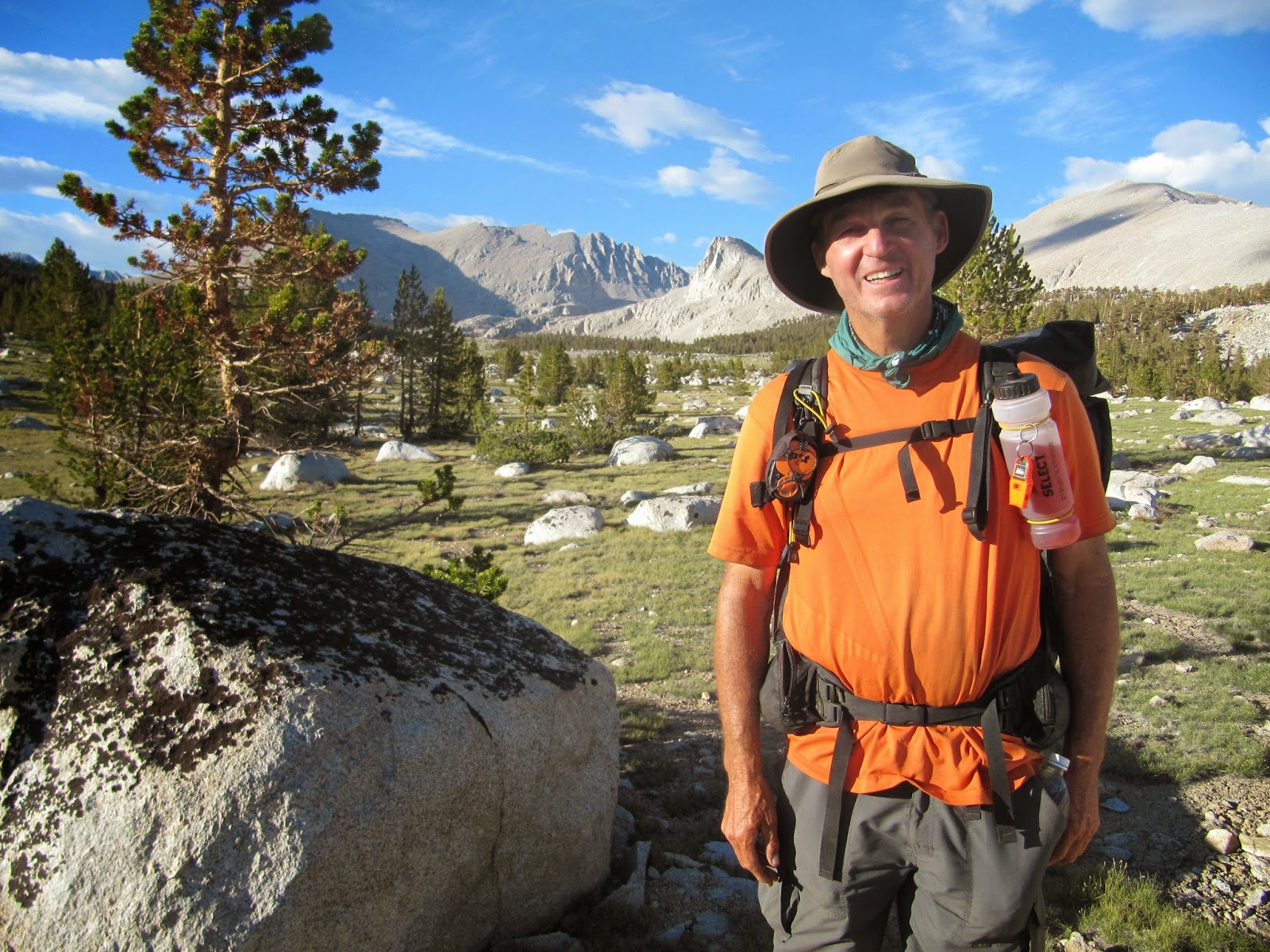 At this point, on the approach to Forrester Pass, I'm still below treeline. The pass is in the notch to the left of my hat.