Section L – Donner Summit to Sierra City – distance thirty-nine miles, was the shortest section along the PCT.  A determined hiker could go the distance in one day, but most allocate two days for the journey.  My goal for today was twenty miles, with anticipation of pulling into Sierra City sometime late tomorrow afternoon.  From Donner Summit the trail climbed to Castle Pass, and shortly thereafter passed the Peter Grubb Hut, located in Round Valley, a cabin built by the Sierra Club in 1938 for public use.

It was built by friends and family of Peter, who was an avid Sierra Club member and who had just graduated from Galileo High School in San Francisco, California.  He was on a bicycle tour in Italy with a friend, Bill Burd, when he died at age eighteen.

Crest ridges, steep volcanic gullies, slippery squishy clay, marshy meadows, and hordes of mosquitoes dominate the trail leading to Jackson Meadows Reservoir.  I was able to hike twenty-two miles today and made camp in a grove of mountain hemlocks.

The trail passed close to Jackson Meadows Reservoir and it was tempting to take a few moments and swim in the warm waters, but I didn’t.  I still had seventeen miles to travel today to get to Highway 49 and then walk or hitch a ride into Sierra City.  The pain in my back muscles is now almost unbearable.  I had to stop often to shift the weight of the pack in an effort to find even a modicum of relief, and whatever respite I found was only temporary; nevertheless, I kept shifting the weight and moved on.

My daughter, Allison, is a nurse in Utah; using my cell phone, I put a call through to her and asked if there was any over-the-counter pain medication stronger than Aleve or Ibuprofen that I could purchase.  She said there wasn’t, so I resigned myself to living with the pain.

From the reservoir, it was all downhill to the highway and a bridge that crossed over the North Yuba River.  Just before the bridge crossing, I saw another hiker cross the bridge, then pass to the other side of Highway 49, where he positioned himself to hitch a ride into Sierra City.  I joined him beside the edge of the road; it was Fun Size, the happy-go-lucky hiker from Portland, Oregon, who has a girlfriend that he misses dearly.

Traffic was sparse and after fifteen minutes of waiting, I elected to begin walking the mile and a half into town.  I told Fun Size that if he scored a ride, maybe he would be willing to ask the driver to stop and pick me up also. Two hundred yards down the road, a car passed me going in the opposite direction.  It stopped, turned around, and pulled up alongside of me.  The young lady driver asked if she could give me a ride into town.  I readily accepted.

From where Fun Size was standing beside the road, he could see that I had snagged a ride.  I asked the young lady that inasmuch as she was willing to give me a ride, would she also be willing to turn around and drive the short distance to where Fun Size was standing, and give him a ride also.  She readily agreed, and in minutes, both Fun Size and I were on our way to Sierra City.  The driver’s name was Ziggy and she said she had hiked the trail last year and was just paying forward all the kindness she had received on the trail.

Ziggy stopped in front of the Red Moose Inn and the two of us got out of the car.  We thanked her profusely for her kindness and generosity, and stepped onto the wooden porch adjacent to the entrance of the inn.  There were half a dozen hikers sitting in chairs on the porch, eating food or sorting through their resupply boxes.

The Red Moose Inn was a combination restaurant/motel that catered to the hiking crowd. Several years ago, the owners elected to begin receiving hiker resupply packages, as well as allowing the hikers to camp on the lawn in their backyard.  They also had restrooms and showers for use, as well as outlets for charging electronic devices, and a computer with Internet connection for checking e-mails and uploading trail journals and images.  I retrieved the resupply box that I left here several days ago, and returned to the wooden porch to sort through it.  I located an empty table and lay my supplies on top of it.

While sorting through my box, I prepared a packet of Idahoan Instant Potatoes and had that as my evening meal, along with cookies and a peanut butter and jam sandwich.  Even though there was a restaurant just a few feet away where I could have ordered a tasty meal, I didn’t want to spend the money.

I discovered long ago that I don’t live to eat; rather, I eat to live and quality of food is not that important to me.  At home, when my wife asks me what I’d like to have for dinner, I remind her that anything above a peanut butter and jam sandwich is fine with me. Kellogg’s Raisin Bran is great for breakfast, and if I had to subsist on Top Ramen and Idahoan Instant Potatoes for dinner, I wouldn’t be put out.  My wife likes to remind me that I’m a cheap date. 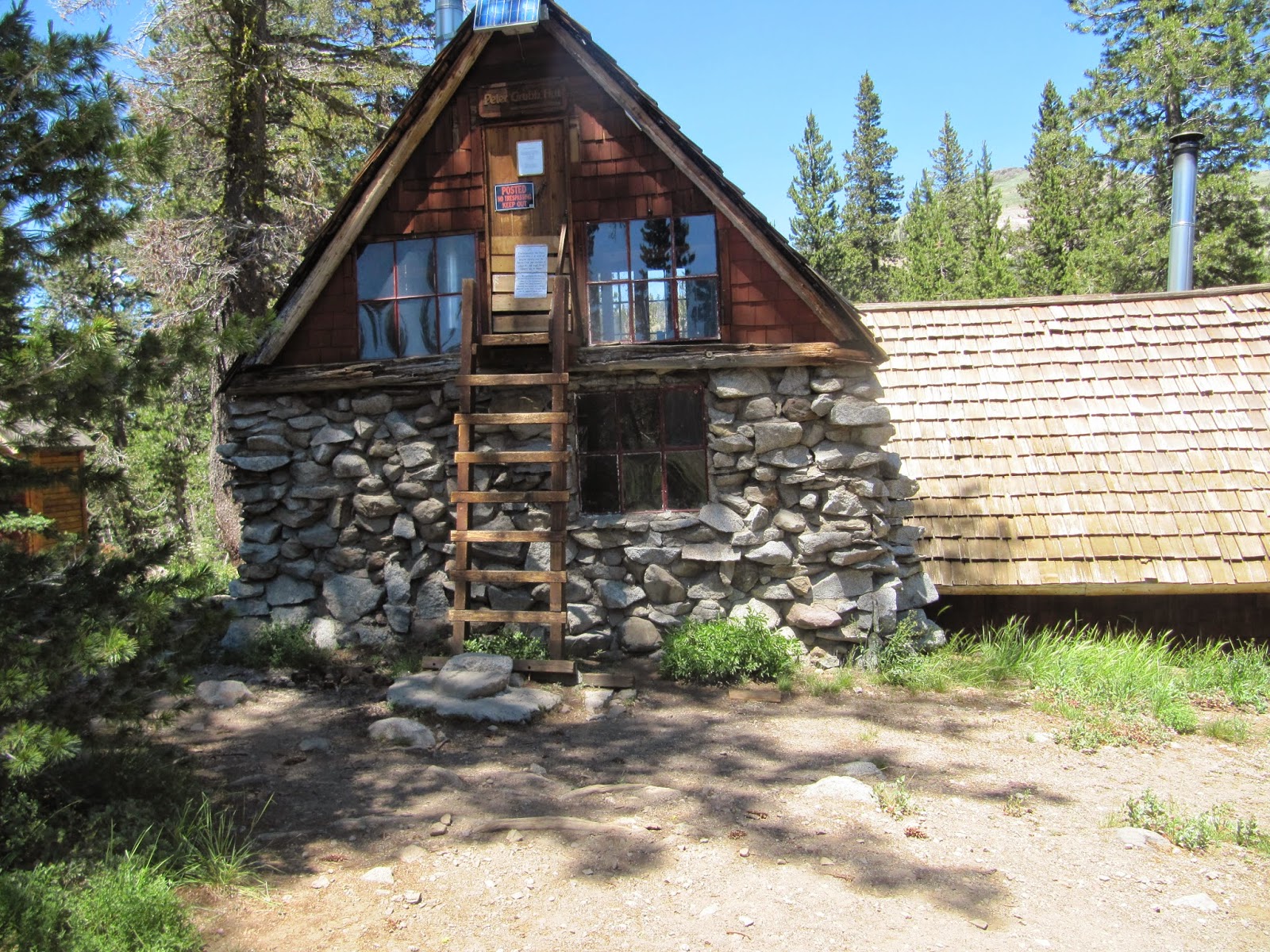 The Peter Grubb cabin. It's just off the trail, not hard to find. The ladder to the door shows how high the snow can get during the winter months.
Posted by Richard Jones at Thursday, May 30, 2013