Part 76 - Horses and the Lone Ranger

I’m only eight miles from Red’s Meadow Resort and Pack Station, and I’m excited to get there, for I understand there is a café there, which means real food and possibly a chocolate milk shake.  Eight miles means four hours of walking, and by 10:30 a.m., I enter the confines of the resort.  I encounter first a corral of mules that give off the same smell as horses, which for some reason, is quite repugnant to me.

As a boy, I liked horses; I always wanted to be a cowboy, and loved to ride the merry-go-rounds that featured wooden horses.  The Lone Ranger was my hero, even though he was sponsored by General Mills Cheerios, and I was a Kellogg’s Raisin Bran fan.  In a coloring contest, I once won a complete Lone Ranger outfit, and wore it until it was reduced to rags, but as I grew older, my experiences with horses was negative, and I simply wrote them out of my life.  I gave up wanting to be a cowboy, and instead settled on being a cartoon animator.

Next was the tack room, from which emanated the smell of saddles, bridles, and horse blankets, and last, the bunkhouse which the wranglers called home and which also smelled like mules.  The trail widened to the width of a road, and I think I missed the sign that said, "PCT - turn here," and instead continued on the road until I was standing in the midst of tourist cabins around which were parked pickup trucks and large SUVs.  I continued on the road, and finally I was standing beside the split-rail fence that surrounded the Red’s Meadow Resort Café
.
There were a dozen packs sitting on the ground outside the café.  I placed my pack next to them and entered the café. It was noisy with chatter from the happy hikers sitting at the counter and tables enjoying their breakfast omelets, with side orders of pancakes, bacon and scrambled eggs.  The aroma of freshly brewed coffee filtered through the air.

The hikers were fully engaged with the contents of their breakfast and hardly noticed me as I searched for an empty seat.  I spied OTC sitting at the counter with an empty seat next to him, so I slid in beside him.  The waitress handed me a menu, but I didn’t bother to look at it; I just told her I would have the same as OTC, plus a side order of pancakes with lots of butter and syrup.

Most of the hikers were headed into Mammoth Lakes for a day of R&R and to catch up with their resupply boxes.  Normally, a shuttle bus would make the twenty-mile round-trip between Mammoth Lakes and Red’s Meadow several times a day to bring tourists to see the attractions at Rainbow Falls and the Devil’s Postpile, but it hadn’t started operations yet, so for hikers to get to Mammoth Lakes, they had to be resourceful, which meant asking tourists for a ride into town.

Just below the café and store was a parking lot where tourists could park their cars while they visited the falls.  After breakfast, I too went there to wait for sightseers returning from their visits to the scenic attractions.  It takes a certain amount of courage to walk up to a complete stranger, knowing you smell worse than a horse, and ask if they were going back to Mammoth Lakes, would they be willing to give you a ride.  I made about ten requests and was rebuffed each time, but it didn’t faze me, for I knew if I didn’t keep asking, I would never get into town.

At the far end of the parking lot was a large group of kayakers getting their gear ready for a descent down the Middle Fork San Joaquin River.  This section of the river was reputed to be one of the toughest and most scenic kayak runs in the U.S.  I saw that the group had two vehicles between them, which meant two shuttle drivers.

After the kayakers left, I approached one of the drivers and pleaded my case for a ride into Mammoth Lakes.  With some hesitation, the young shuttle driver agreed, and in moments, we were flying down the mountain road.  The driver’s name was Zak, and he said he worked for a rafting company somewhere farther down in the valley, and this was his first shuttle for which he was being paid $200.  He knew nothing about the PCT and asked me lots of questions about the trail, to which I’m more than happy to answer.  In a half hour, we were in town and he let me out at the Motel 6 where I had a resupply package waiting for me. 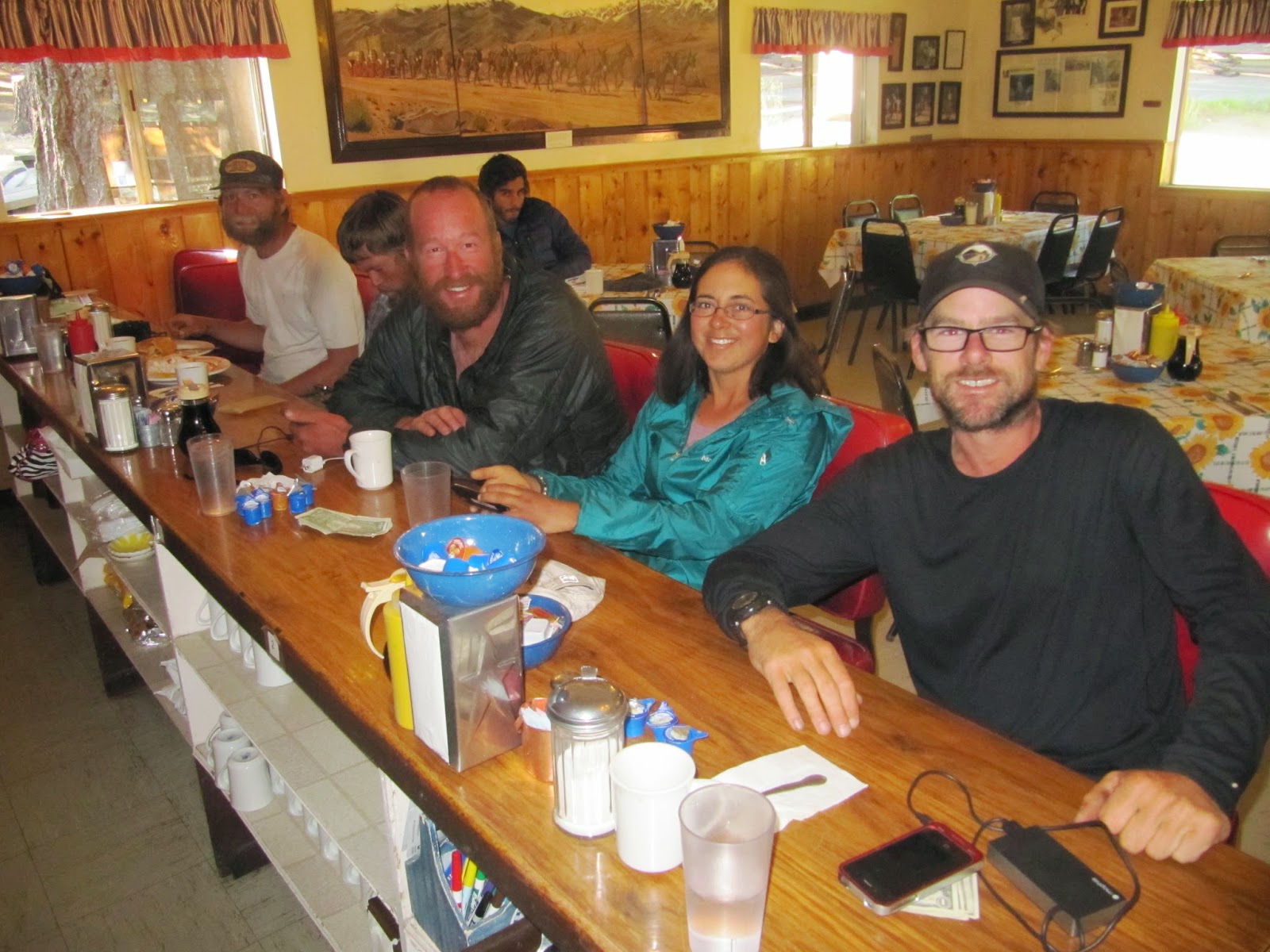 The gang I've been hiking with for several day are seated in the cafe at Red's Meadow Resort ready for breakfast. L to R: OCT, Spoonman, Skinny D and B-Rad. 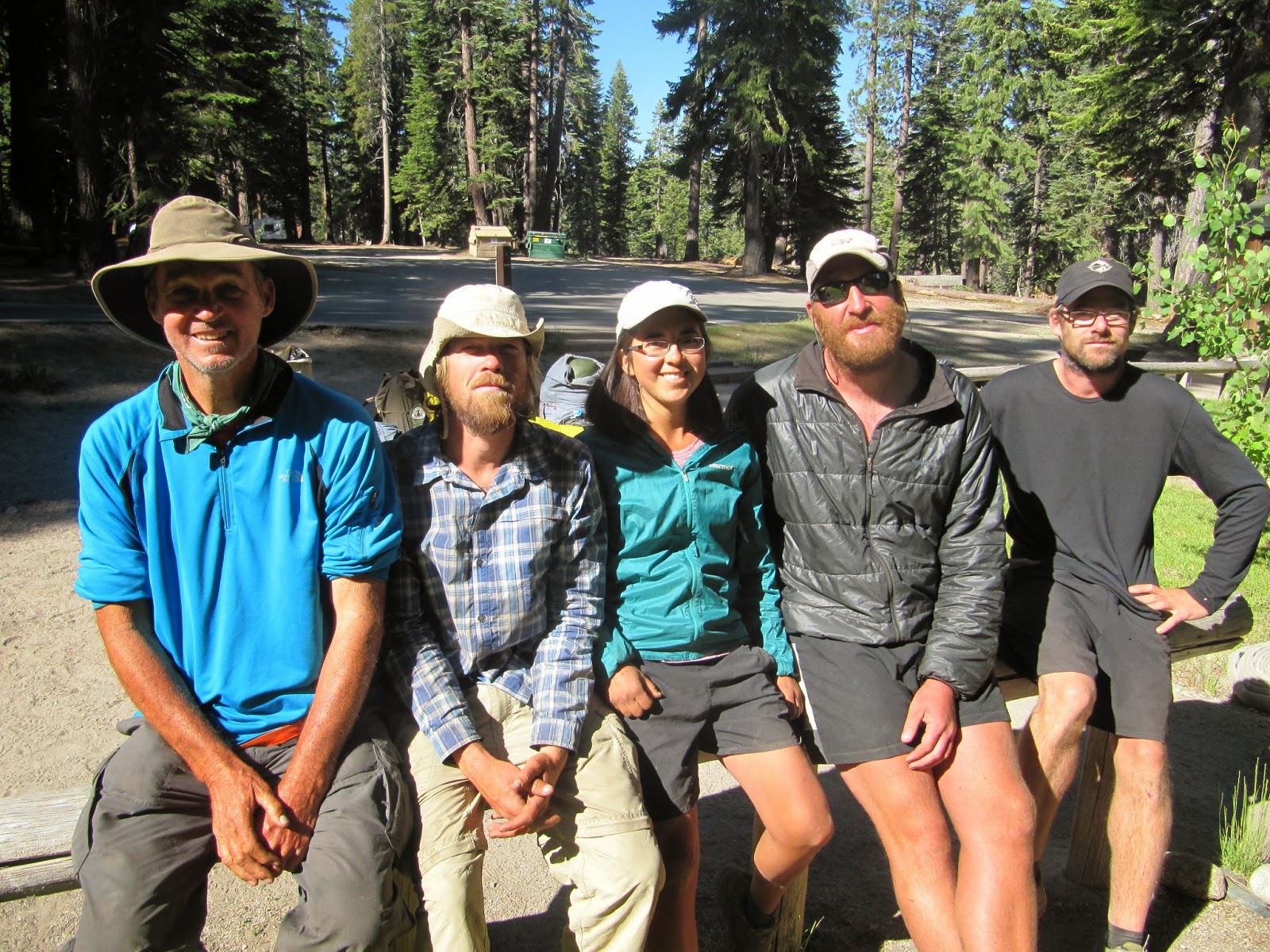 After breakfast, we all poised for group phots; after today, we never saw one another again. L to R: Rabbitstick, Butters, Skinny D, Spoonman and B-Rad. 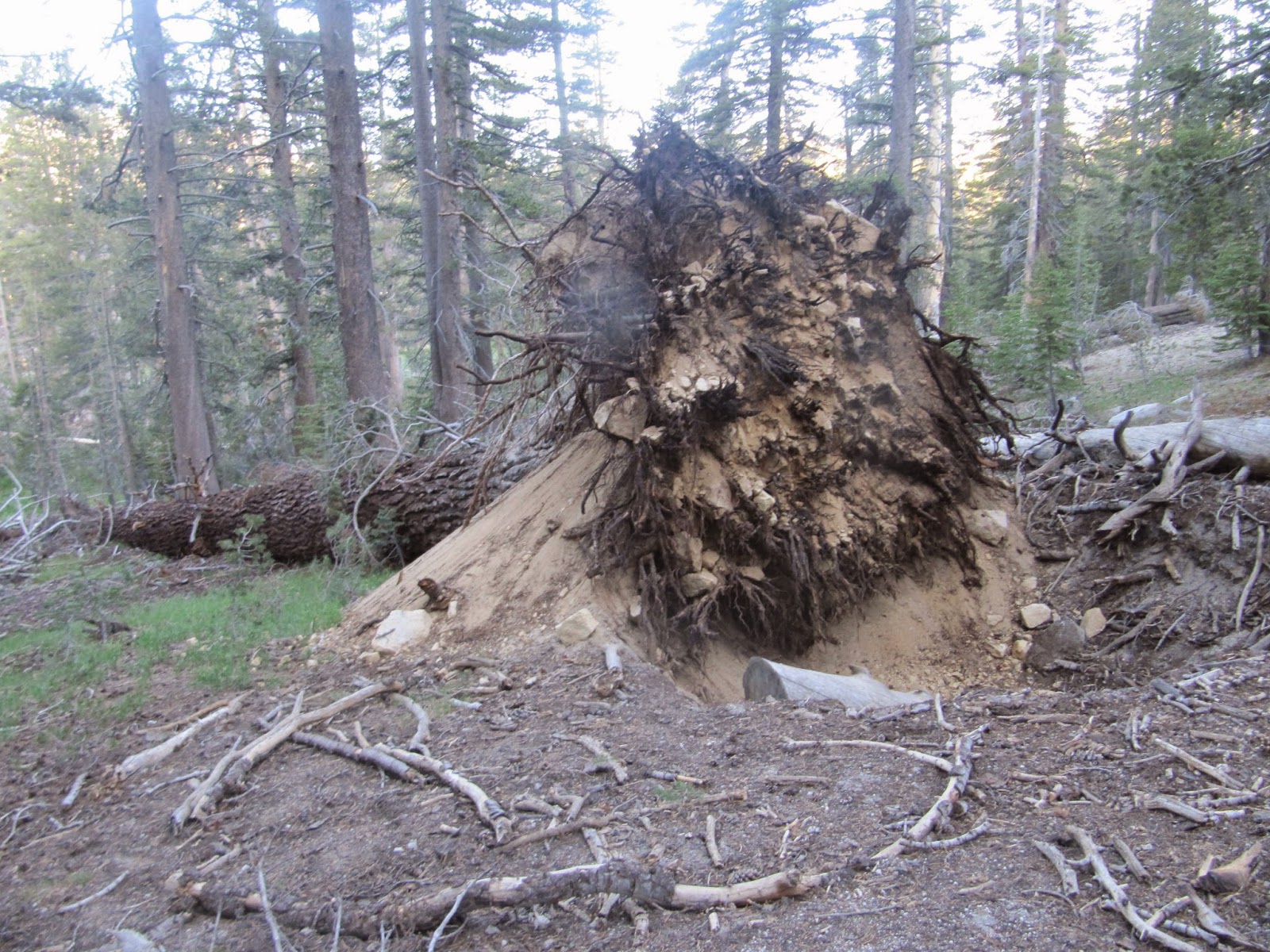 In late 2012, a freak wind shear sliced through this section of the forest around Red's Meadow and toppled thousands of trees. The first hikers through in 2013 almost could not negotiate the twisted tangle of downed trees. It took them hours to make any progress forward. By the time I arrived, much of the debris had been cleaned up, but the maintenance crews were still working in the area. 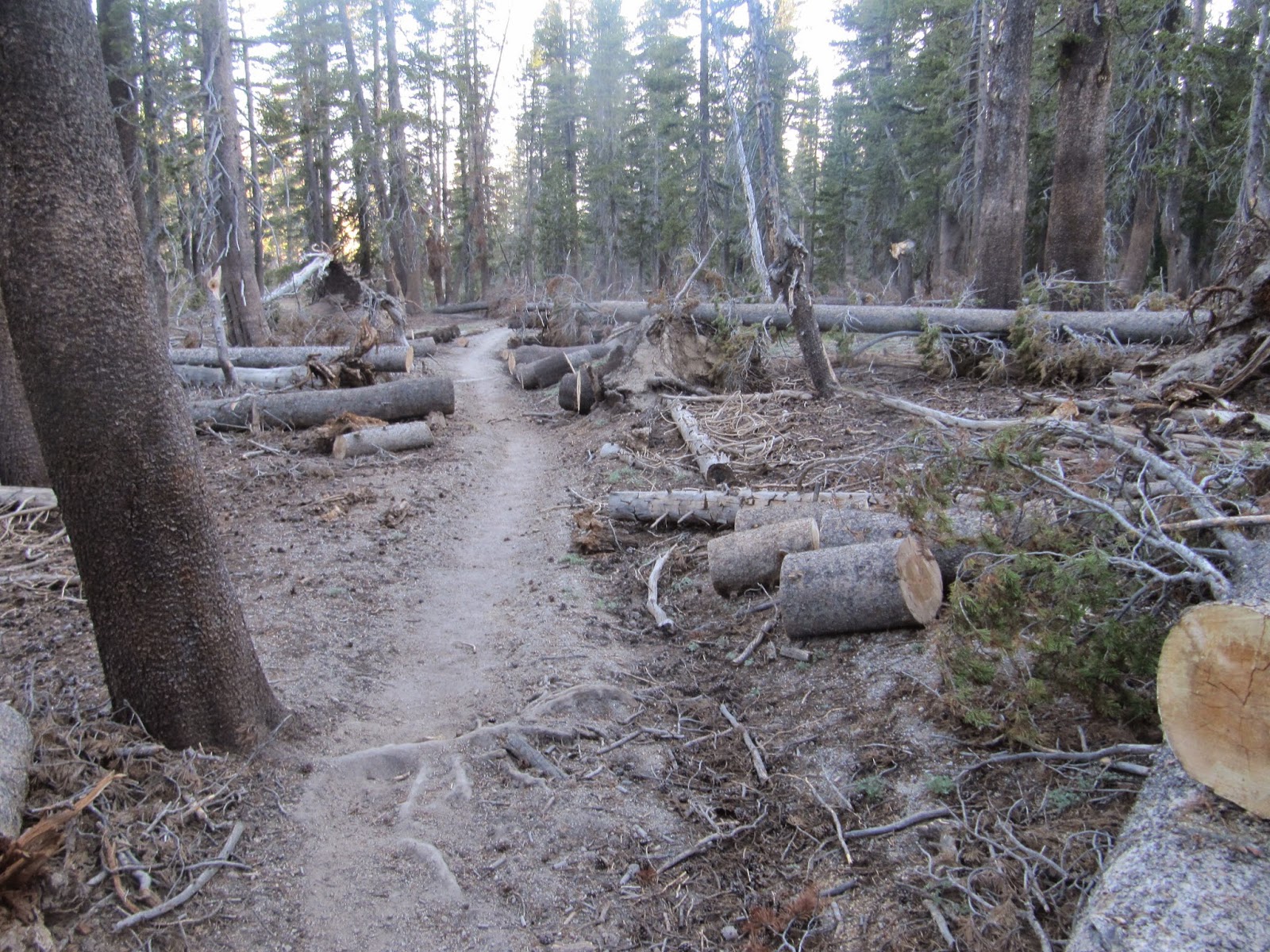 Many sections of the trail took on the look and feel of battleground that had been hit wth high explosive bombs. 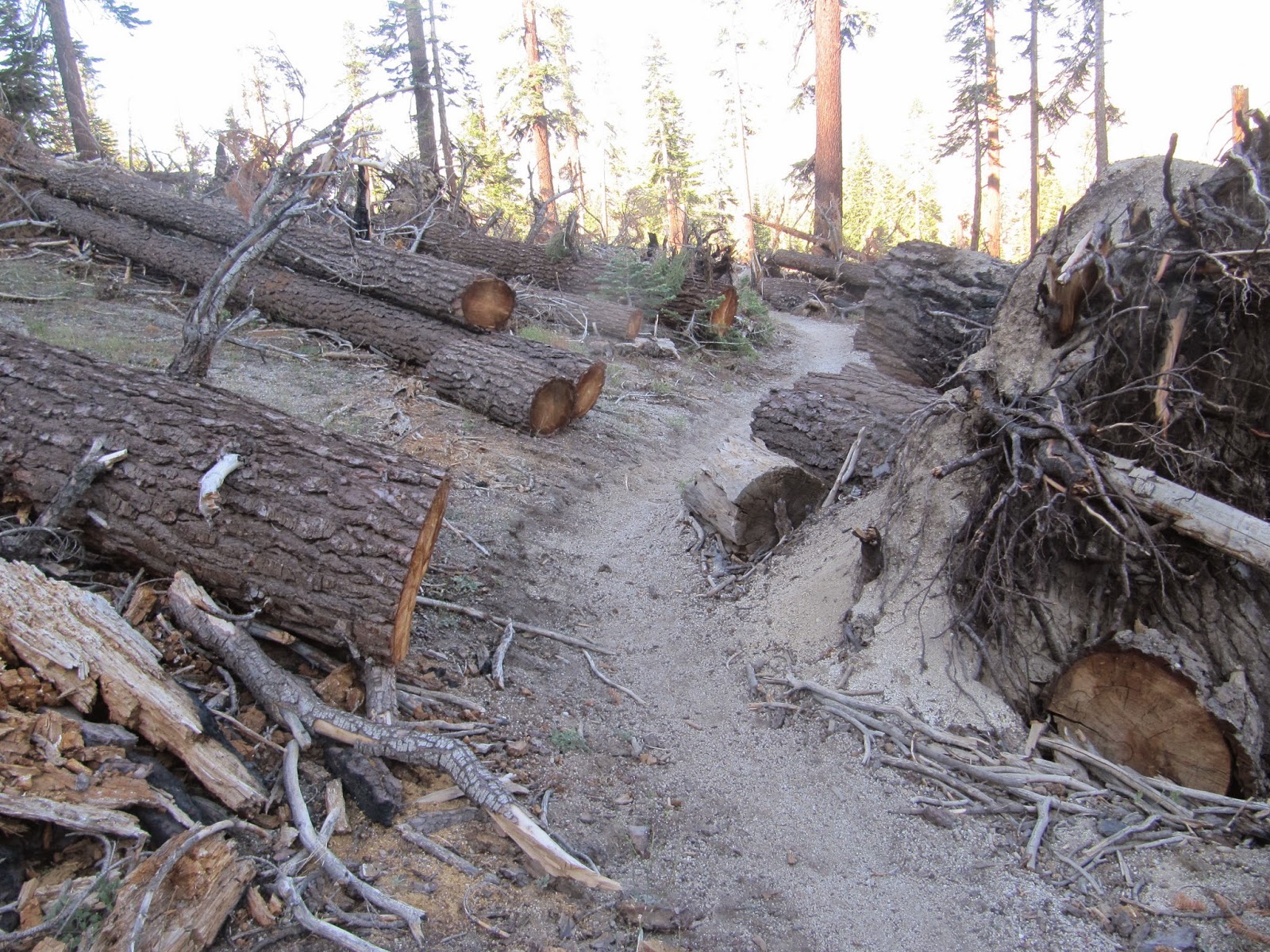 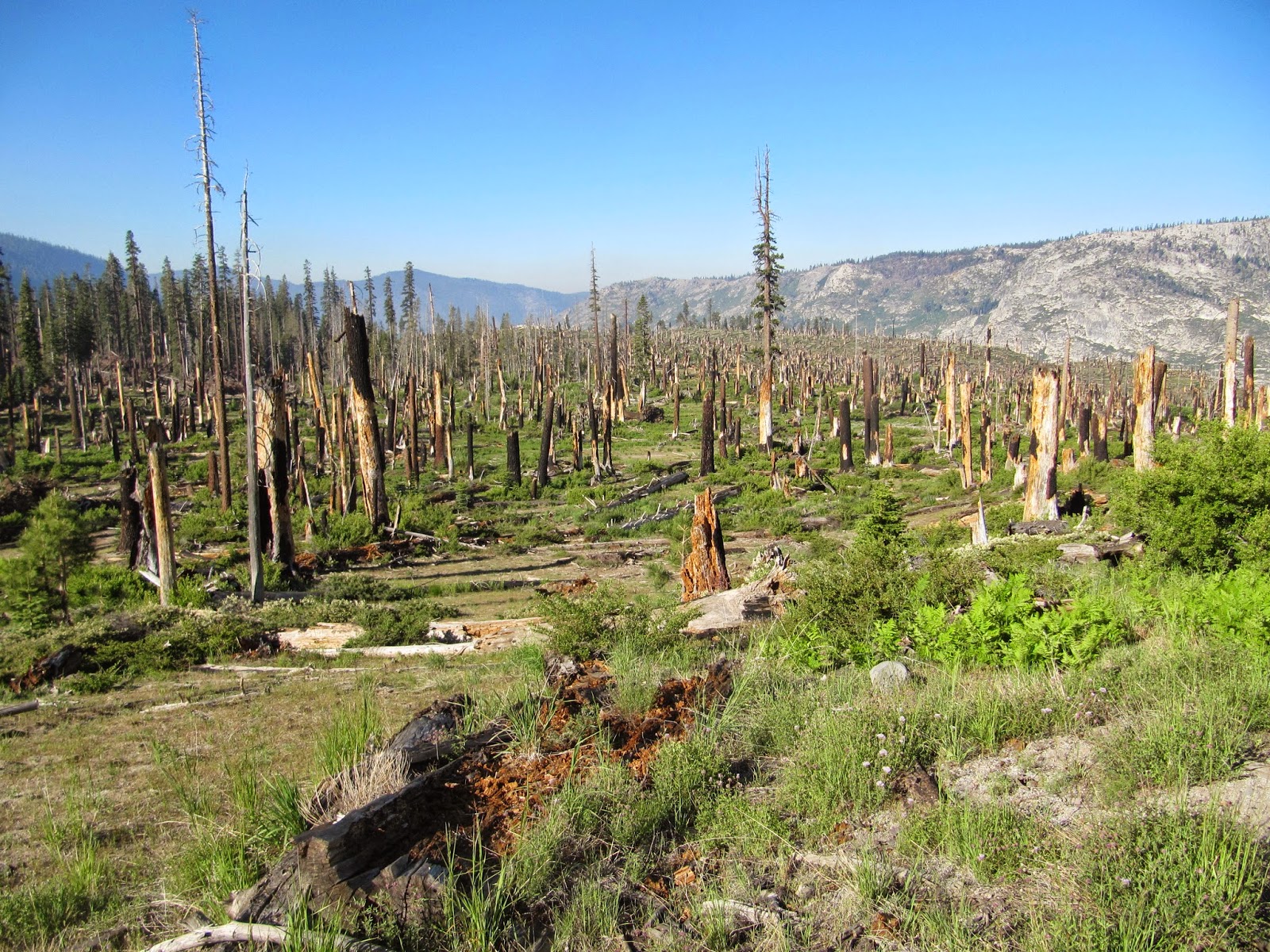 It's a sad sight to see a forest looking like this. This is on the approach to Red's Meadow. 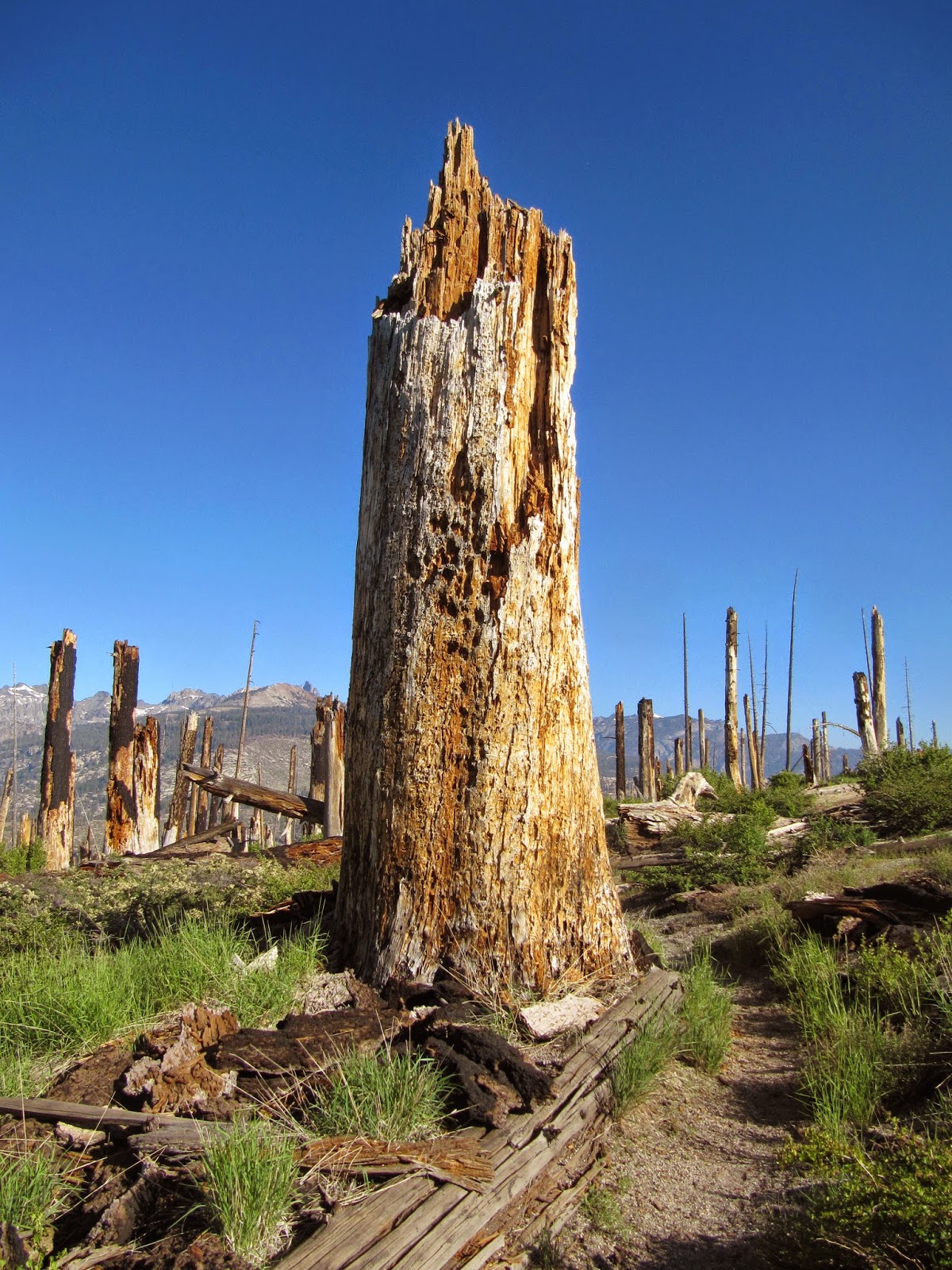 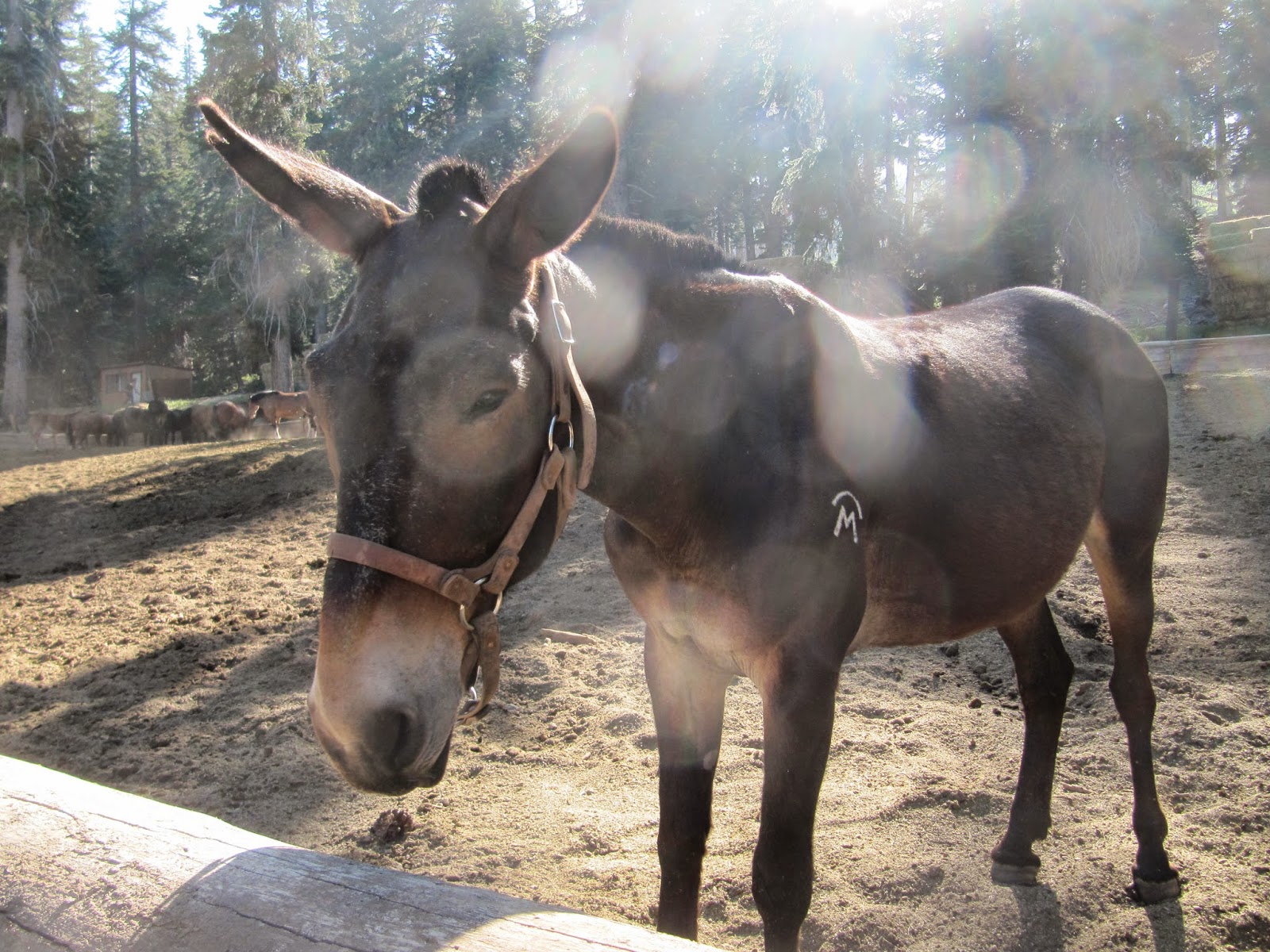 The smell of mules and horses tells you you've arrived at Red's Meadow Resort and Pack Station. 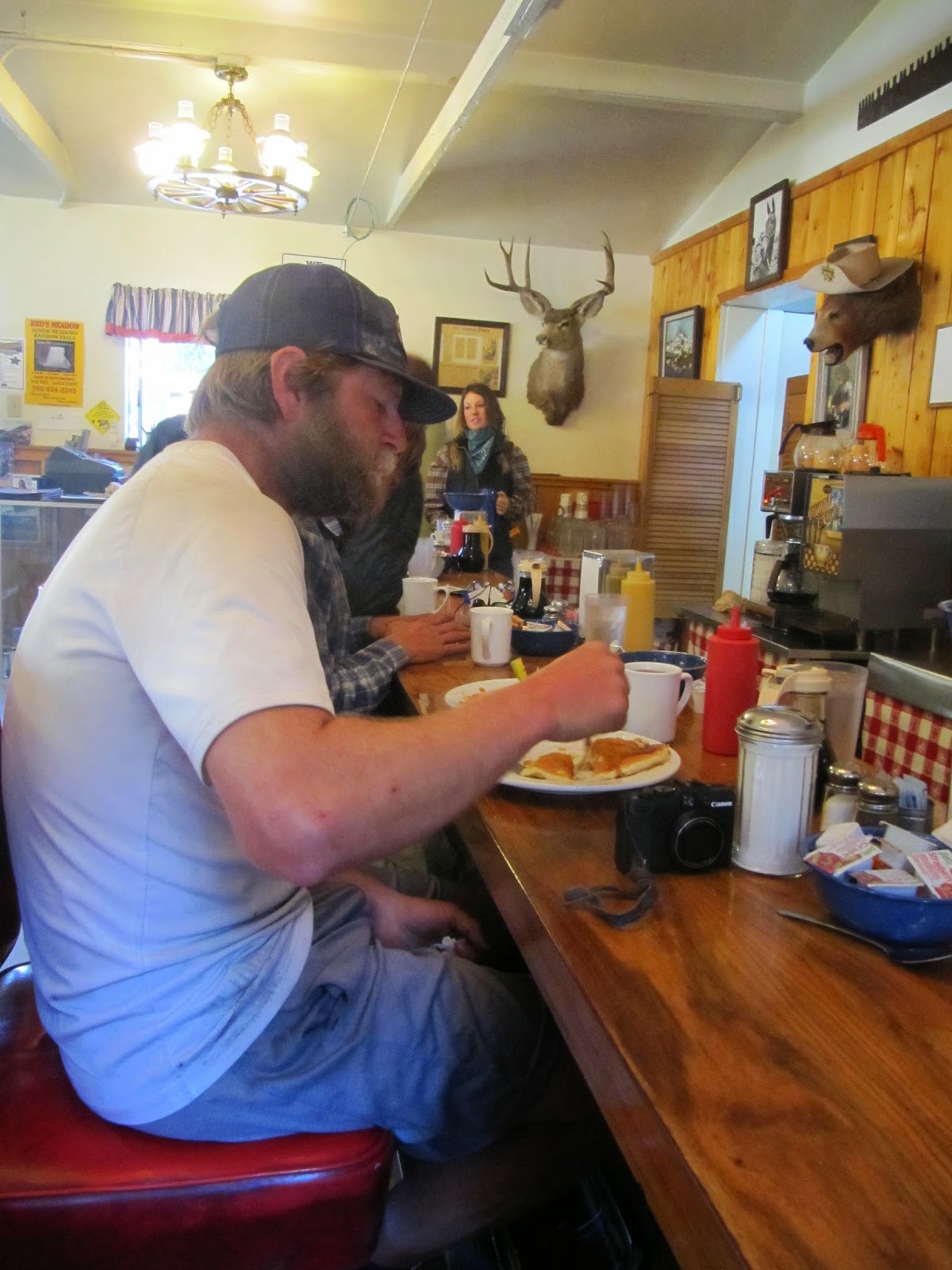 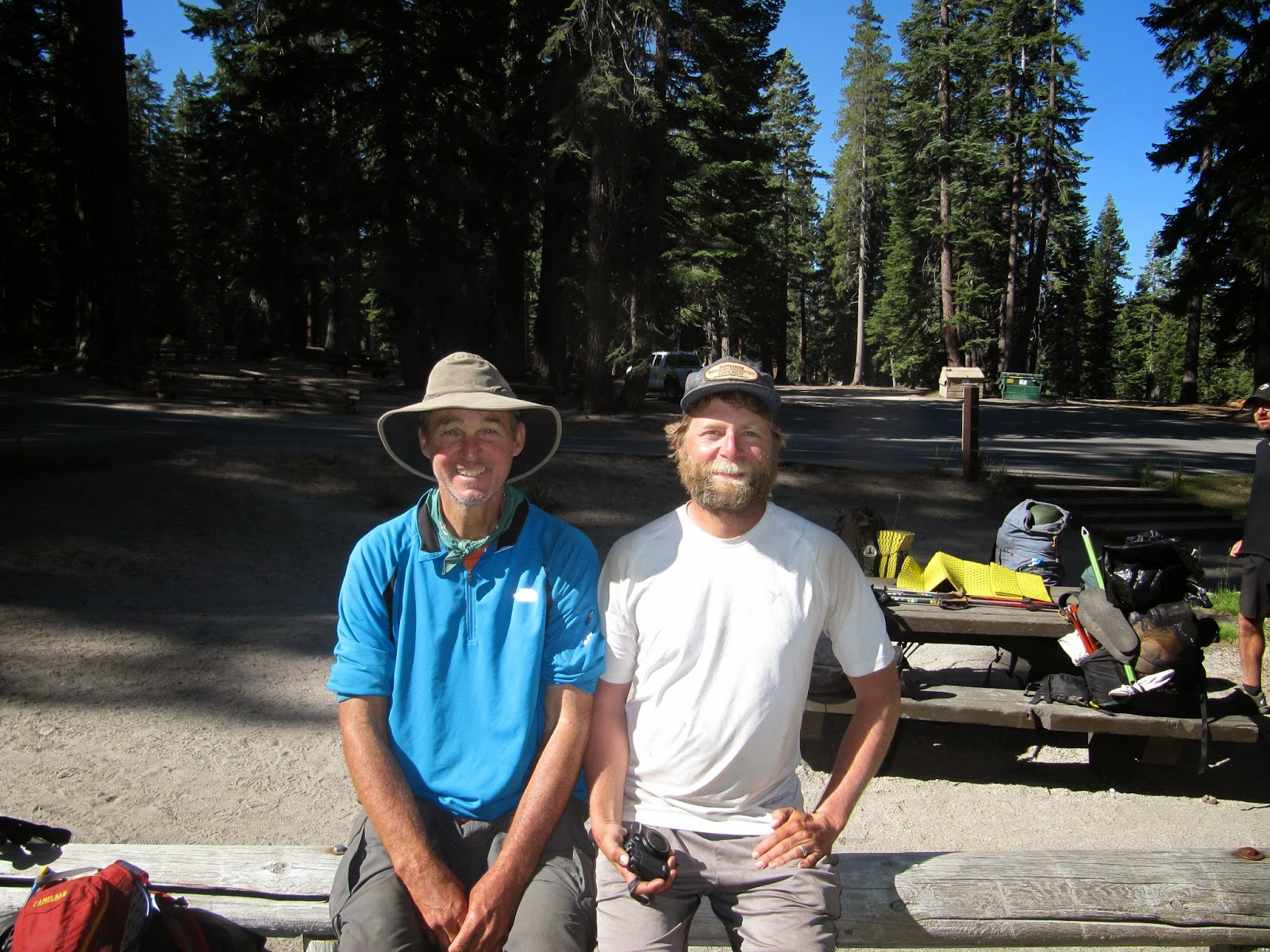 OTC and myself outside the Red's Meadow Cafe.