The storm wasn’t too bad last night, but it did put down a layer of snow at the higher elevations.  At dawn, after eating a quick snack, I continued my ascent up the Kearsarge Pass Trail.  After a few hours of hiking, I crossed back over the summit and descend to the junction with the Pacific Crest Trail.

Back on the trail, I began a fifteen-hundred-foot climb stretched out over three miles to summit the second of the Sierra Passes – Glen Pass.  The trail to the pass was shrouded in a dozen shades of gray granite stone; much of it shattered when the trail builders blasted the rock and then stacked the broken pieces to form a staircase with irregular steps that are both too high and too far apart to attempt anything resembling normal stair climbing.

From the 11,978-foot summit, it was easy to locate the prominent geographical features in the basin below, which consisted of two large lakes; the maps identify as Rae Lakes.  I camped for the night at the edge of lower Rae Lake and the next day summated Pinchot Pass named after Gifford Pinchot, the first chief of the U.S. Forest Service.

The next pass was Mather Pass, situated at 12, 096 feet, and for me, it was a brutal climb.  The switchbacks were steep and seemed to be never-ending.  The trail builders had their work cut out for them when they built this section of the trail.  As always, to make it to the top, I pushed myself by counting units of eight steps, for I knew that if I was moving, I was making progress.

And at the beginning of each new switchback, I repeatedly told myself how much I loved switchbacks, because that meant I was gaining in elevation, and at some point, there would be no more switchbacks and I would have reached the summit.  Stupid as it may sound, this formula worked for me every time.  With today’s time on the trail, I met WeeBee, Siesta, Delaware Dave, Butters, B-Rad, Skinny D, and Spoonman.  I met them because they all passed me.

Just before making the summit at Mather Pass, I paused to rest at one of the last switchbacks.  While sitting on a rock eating a snack, a southbound hiker appeared on the trail above, and in a few strides he was standing beside me.  He stopped to rest and introduced himself as Bipolar.  He was a little younger than I am and said he was flip-flopping this section of the trail, meaning he hitchhiked north to Mammoth Lakes and was now hiking south to Independence, after which he would return to Mammoth Lakes and continue hiking north.

Without any probing from me concerning his life’s story, he volunteered that he worked as a male nurse at a prison facility in Portage, Wisconsin, where he came in contact with the notorious serial killer, Jeffery Dahmer.  He said that Dahmer had been convicted of murdering and dismembering seventeen victims in a killing spree that spanned thirteen years from 1978 to1991, and because Wisconsin had no death penalty, he was sentenced to fifteen consecutive life sentences.

Bipolar said that Dahmer, in conversation, was a nice guy, but he confided to Bipolar that he should never be set free, for he knew in his heart, that he would revert back to his old ways.  Bipolar concluded his story by telling how Dahmer had been killed by fellow inmate, Christopher Scaver, with several blows to the head using a free weight (bar to which weighted discs are attached) as a weapon.

It was a little bit more information than I needed, but the story, nevertheless, was interesting.  Bipolar left and I continued on to the summit where I found B-Rad, Butters, Skinny D ,and Spoonman sprawled out on the ground resting from their just-completed climb.  I joined them for lunch and then pushed on immediately afterwards.  It was a downhill descent for several thousand feet, and I wanted to take advantage of the daylight and make as much mileage as possible.

If there had been sufficient snow on the north side of Mather Pass, it would only have taken a matter of a few minutes to glissade to the valley below, but there wasn’t, so it took a half hour to follow the switchbacks to Palisade Lakes nestled below the pinnacles of the fourteen-thousand-foot Palisade range.  Below the lakes the trail dropped a thousand feet over a rock cliff called the Golden Staircase, a series of switchbacks that ended up paralleling Palisade Creek at the bottom of the basin.  The route turned up LeConte Canyon and passed Helen Lake, named after one of John Muir’s daughters.  On the other side of Muir Pass was Wanda Lake, named after another of Muir’s daughters.

Trying to follow the trail around Helen Lake became a little iffy as the trail was covered with water from the outflow of the lake, and there were still huge snowbanks that had virtually obliterated the trail.  When the trail disappeared, I searched for cairns, piles of rocks left by other hikers to indicate where the trail should be.  Several times the trail totally vanished in the water and I misjudged where it should reappear on the other side; I was not lost, I just didn’t know where the official trail was located.  Through persistence, I was able to keep track of the trail as it wound its way to the base of Muir Pass. 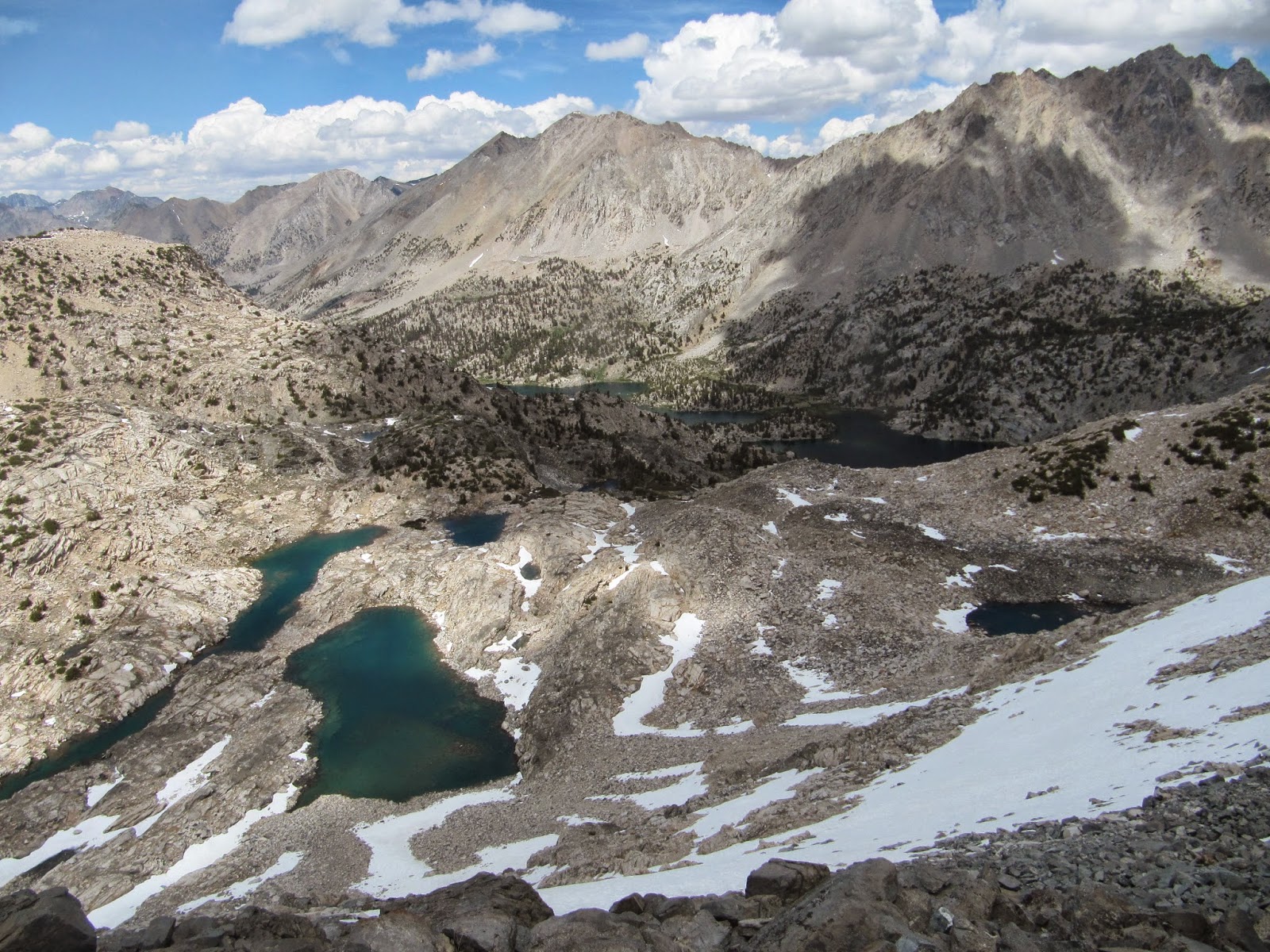 Down in King's Canyon, the landscape is dotted with small lakes. 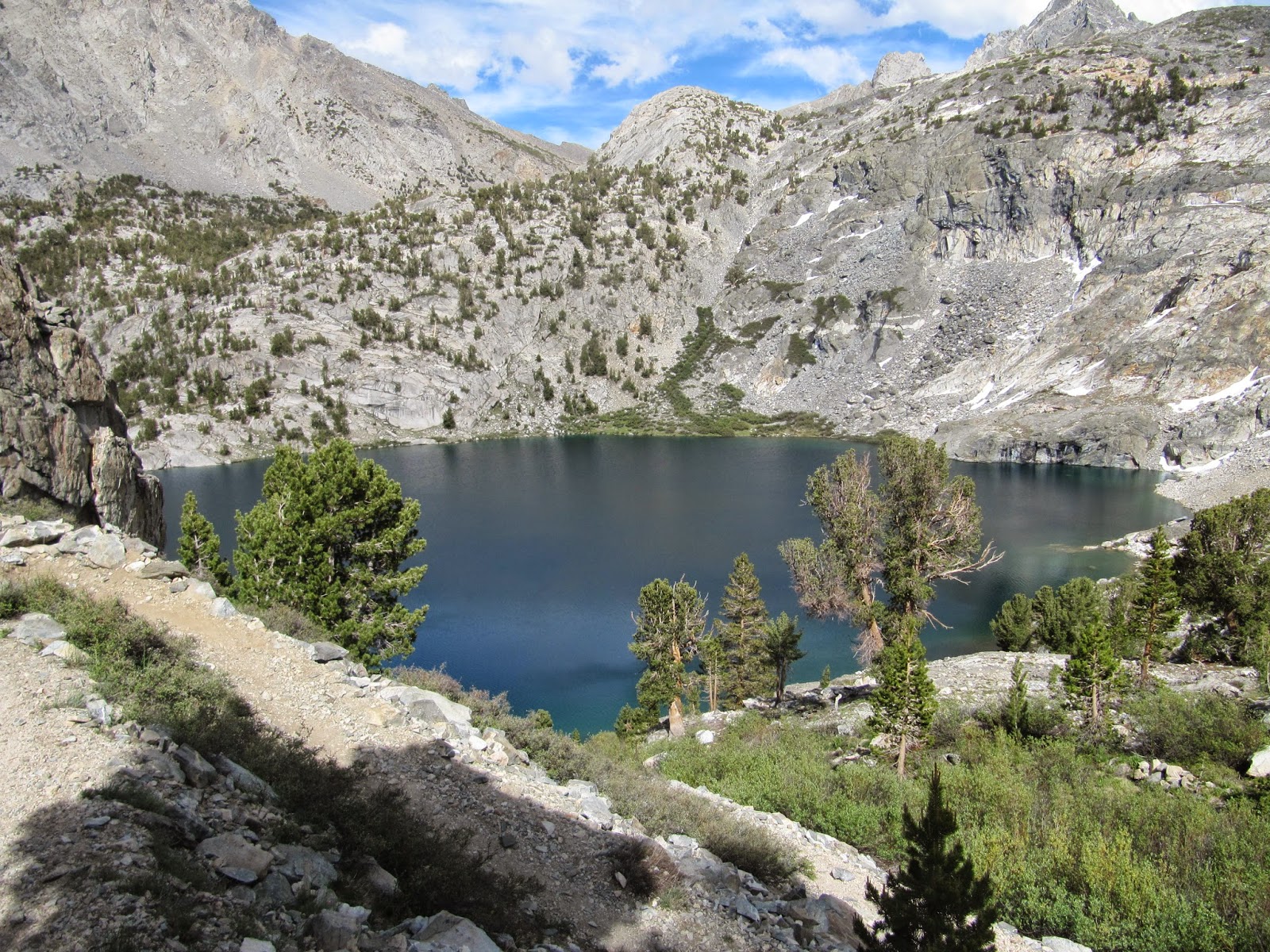 Many of these lakes are planted with fish, making them favorite destinations for hikers coming into the Sierras. 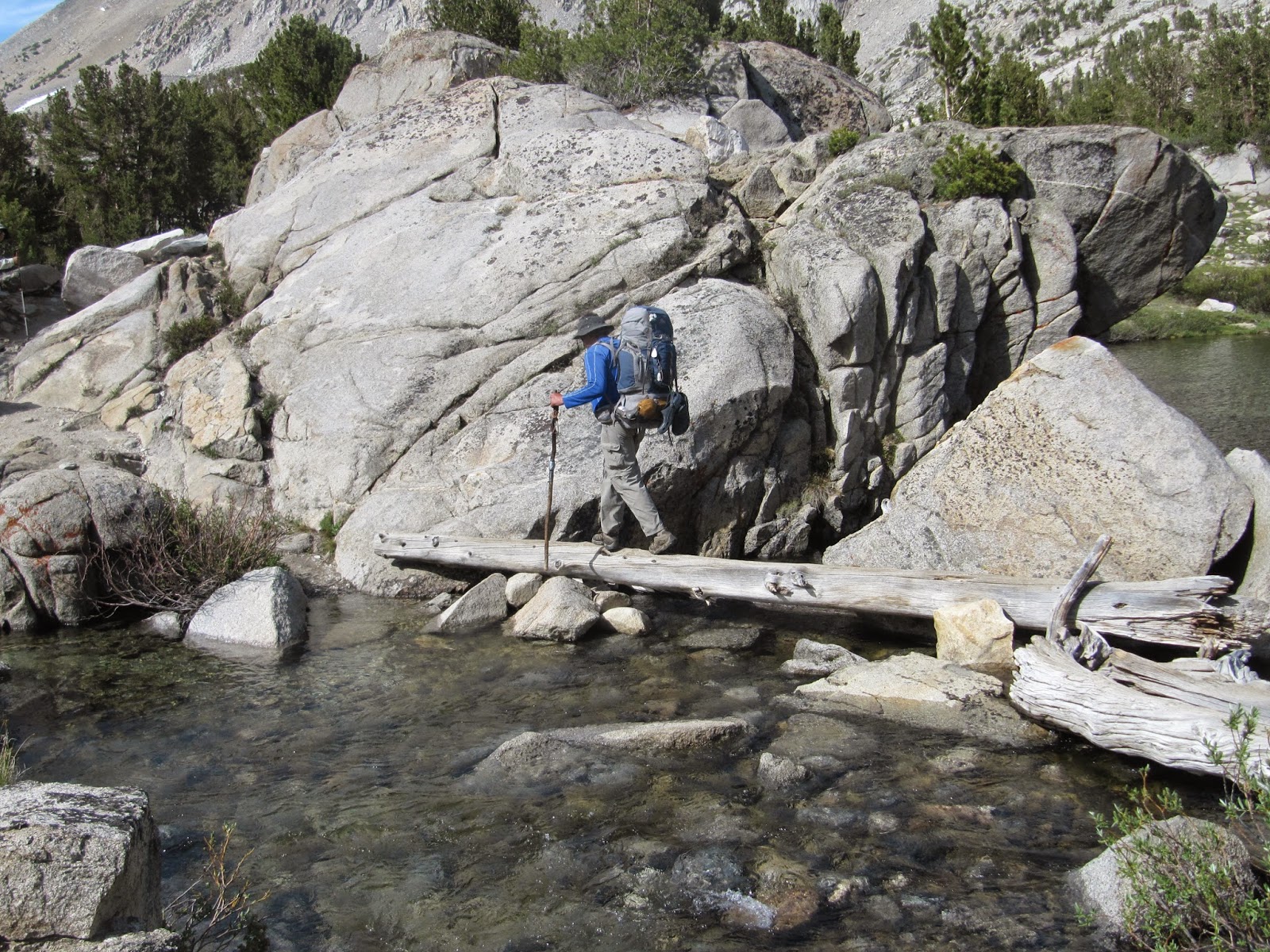 Yet another improvised bridge across a small stream. Anything to keep the shoes dry. 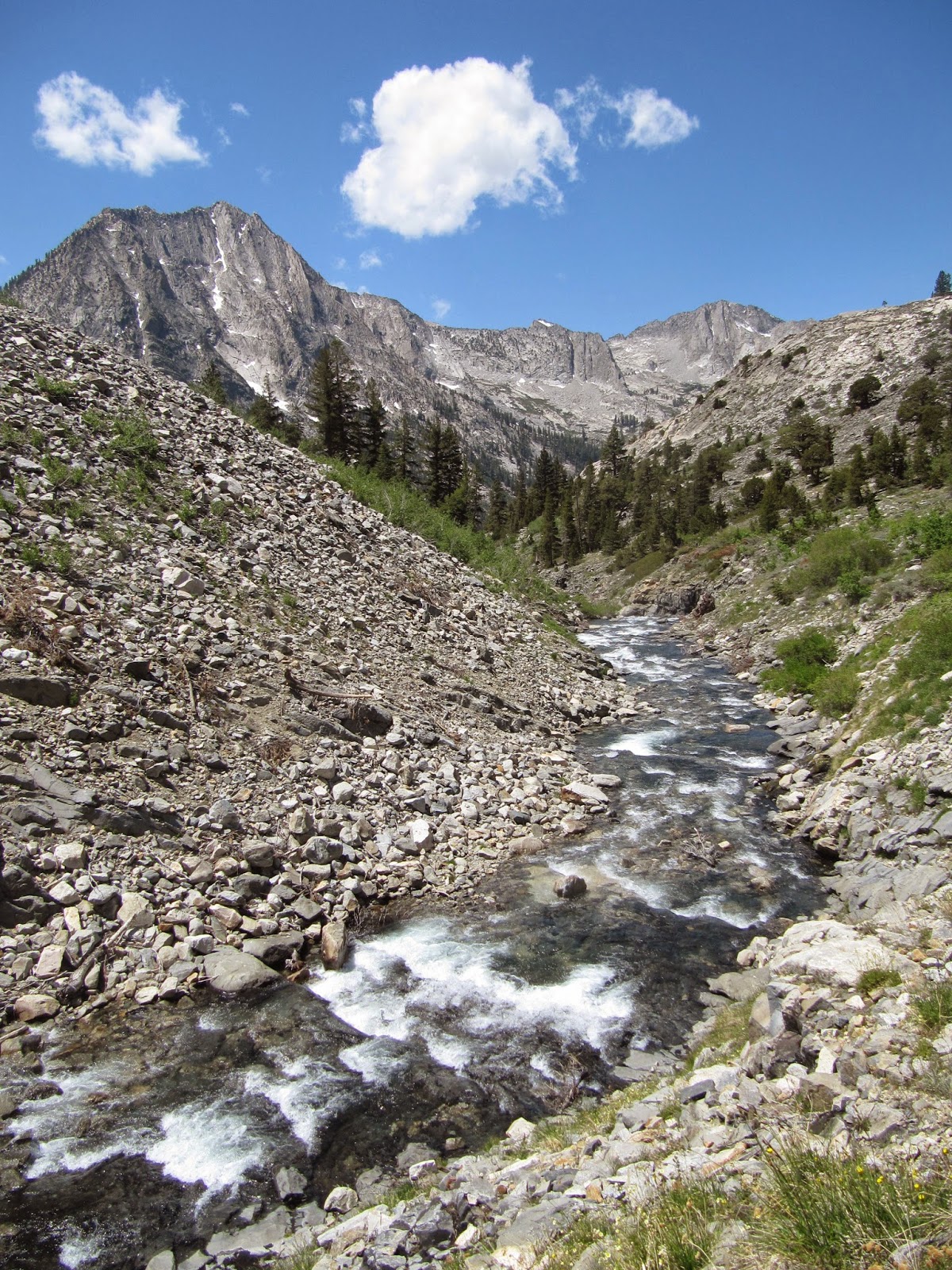 The farther down the canon I walk, the larger the rivers become. 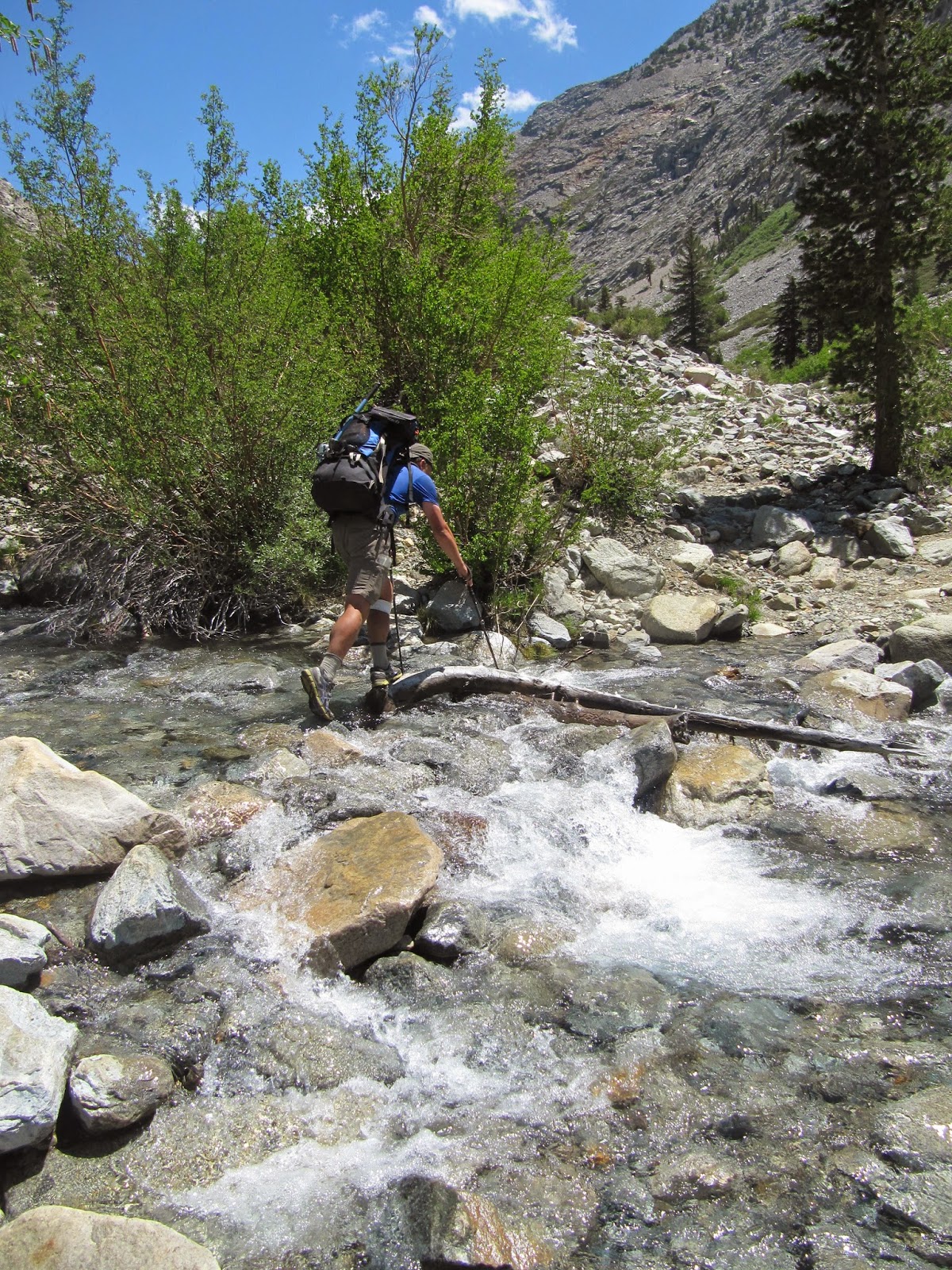 This was a relatively easy stream crossing. 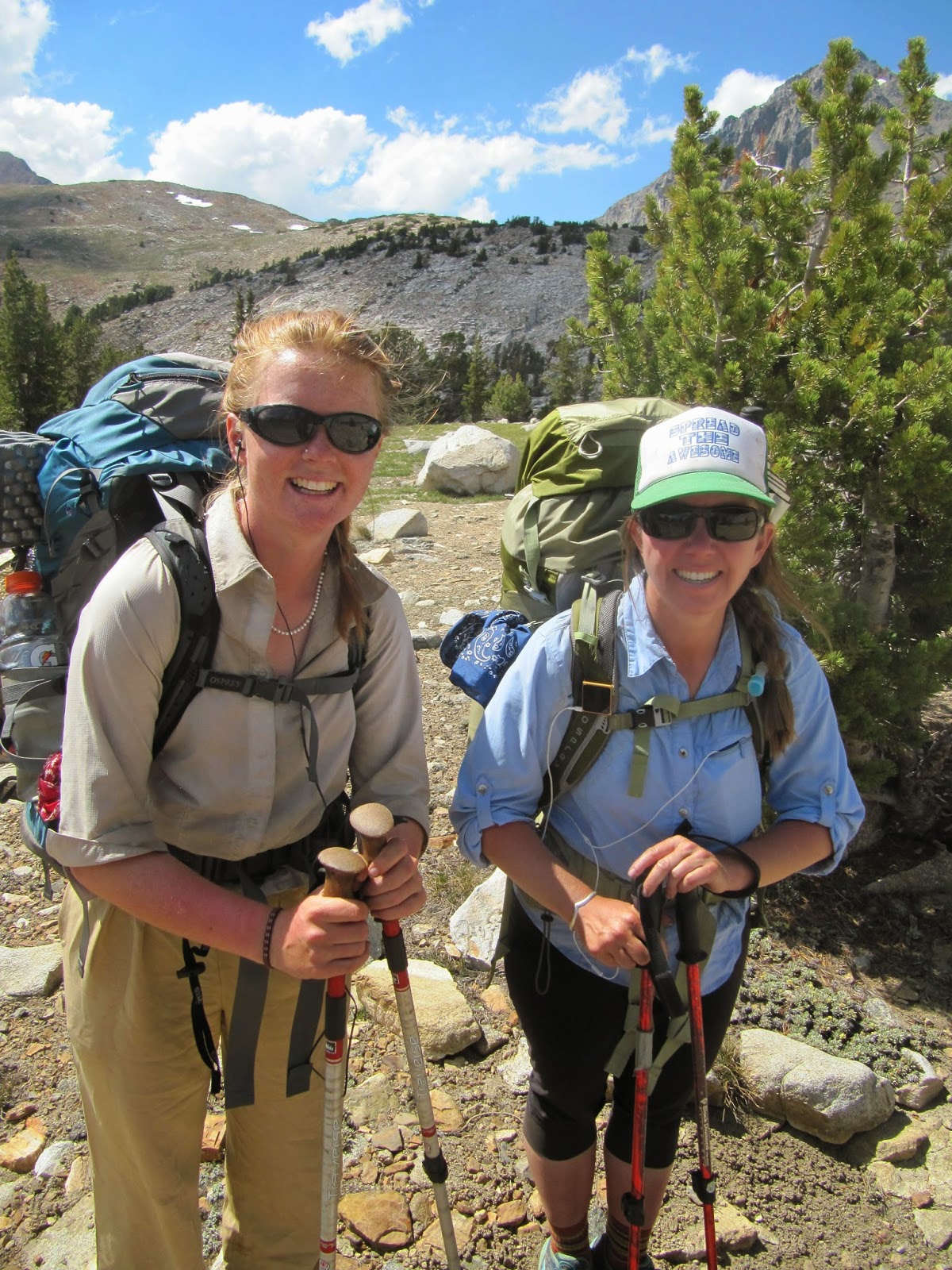 Female hikers Siesta and Weebee. In 2013, there were a large number of female hikers, and their number will continue to grow. Yes, unless you don't mind getting your shoes wet, this is the only way across this stream. 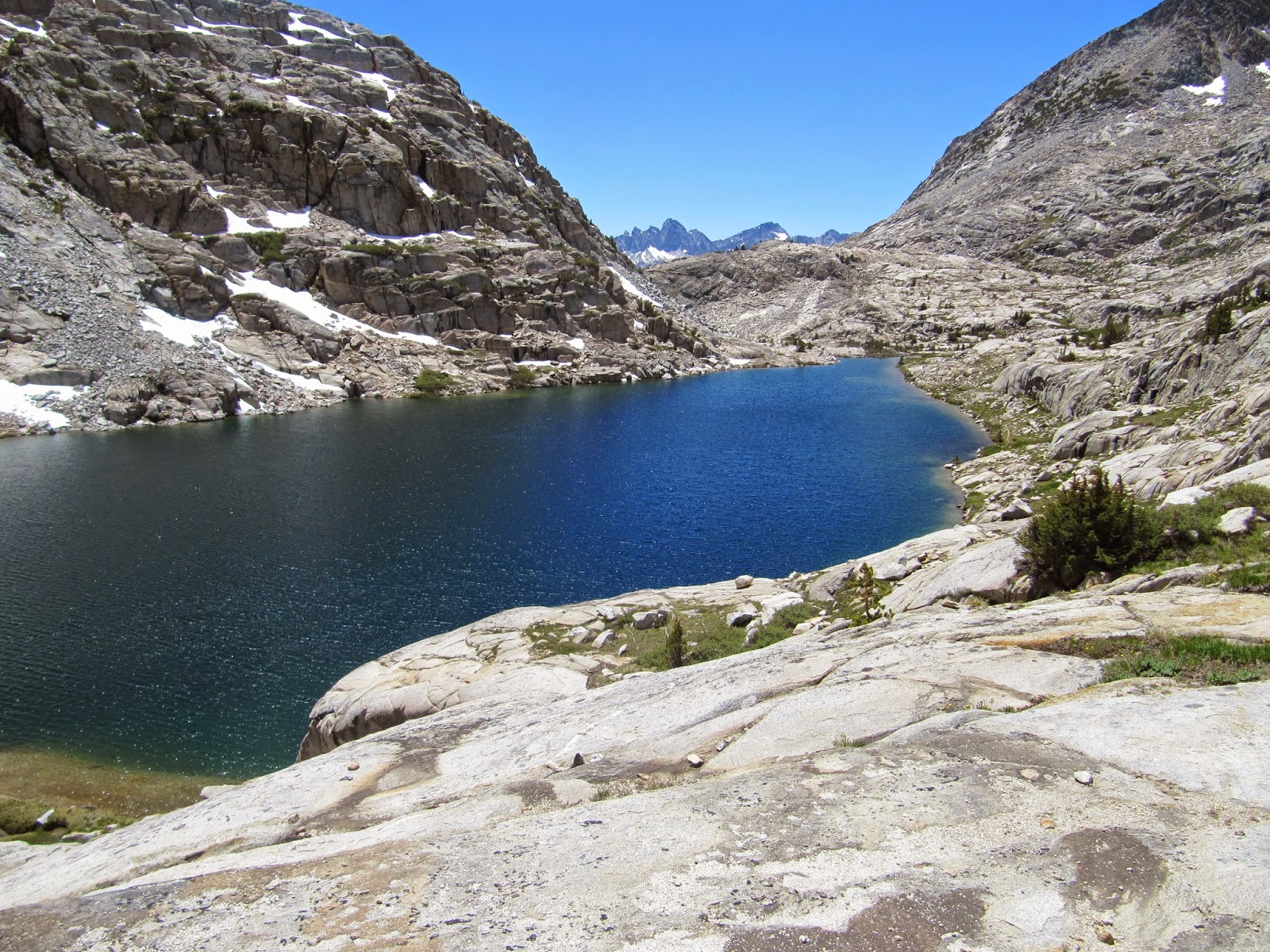 The trail follows along the right side of the sparkling blue lake. 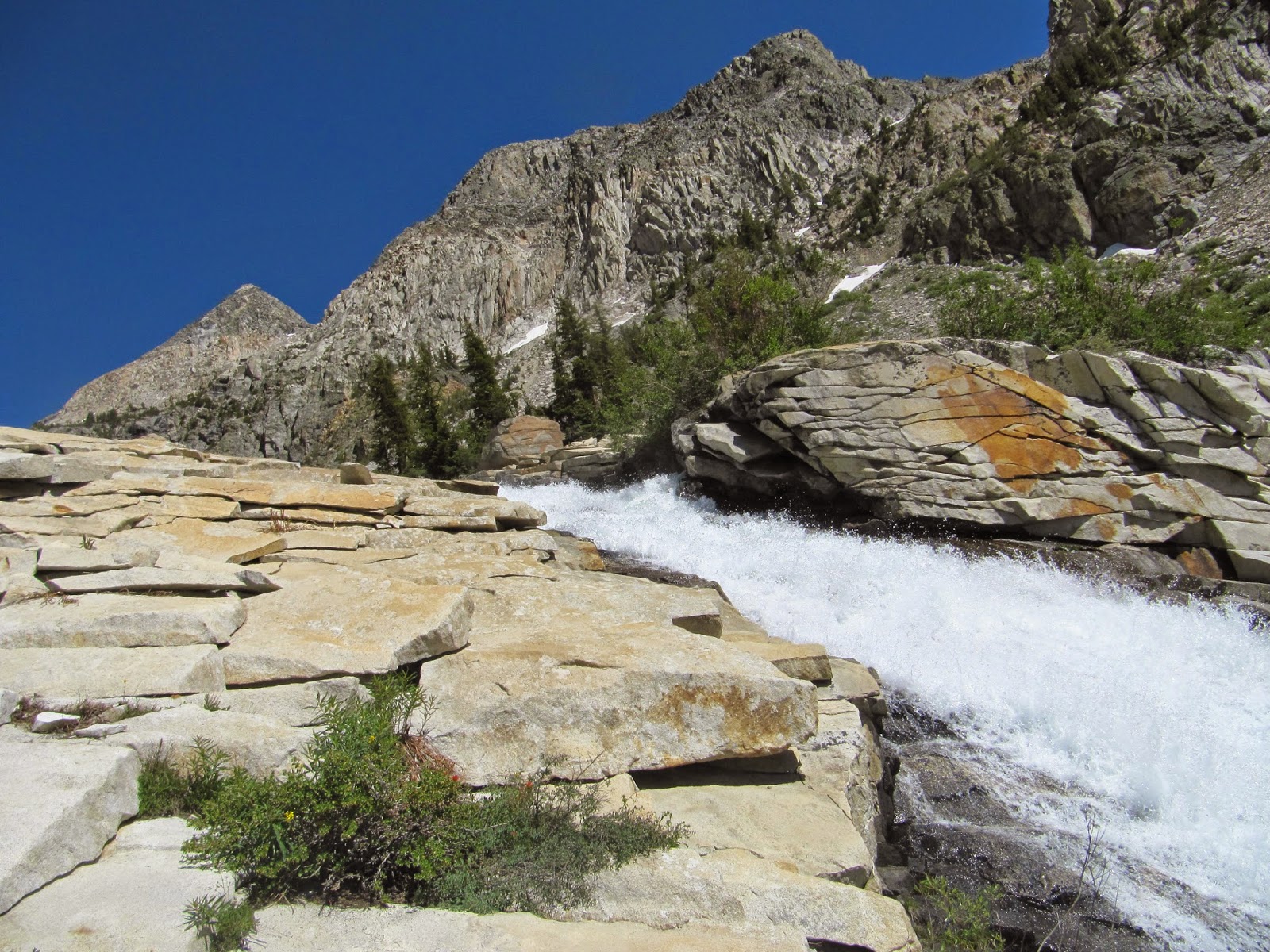 Water rushes everywhere.This water will eventually find its way to the cities and farms along coastal California.