The base was covered with snow, some piled quite high as a result of mini-avalanches.  Without knowing exactly where the trail was, I could only follow the tracks of others who have gone before me.  Inasmuch as I saw no frozen bodies strewn about, I had to conclude that the previous hikers made it up and over the pass, and so I pressed onward.

I had wanted to start the climb up Muir Pass early this morning when the snow would still be hard, for as the day wore on and the sun climbed higher in the sky, the snow would become softer, causing a hiker to sink into the snow.  I reached the base of the pass about noon; the snow was slushy but still has some firmness to it.

I began to climb; I went slow and placed my shoes in the tracks of others.  At times, I sank up to my knees in the snow and hit the jagged rocks lurking just below the surface.  It was painful.  I counted units of eight steps and forced myself to go to sixteen before stopping to rest.  The progress was pitifully slow, but I continued upward.  Just before reaching the summit, I saw the rounded stone dome of the hut erected to the memory of John Muir.

With a mighty effort, I slogged through the snow to reach the dry ground that surrounded the hut.  For a moment, I just stood in front of the stone hut; I was feeling dazed, elated, exhausted, and triumphant.  And now, I needed a peanut butter and grape jam sandwich to celebrate.

There were two other hikers at the hut, one by the trail name of Twice from Anchorage, Alaska, and the other was a section hiker, whose name I didn’t write down.  I placed my pack on the ground beside the hut and spread my belongings on a white trash compactor plastic bag in preparation to making a meal.

It was then that I notice him; I had read about him, but didn’t think that he actually existed; after all, the summit is just forty-five feet shy of twelve thousand feet, and there’s nothing to eat up here.  How did he survive in the off-season?  Out of the corner of my eye, I saw him watching me, getting ready to make his move, should I leave my pack unattended.

It was the resident marmot, fat and roly-poly.  He scurried across the rocks, popping in and out of crevices, always watching my moves.  Just to be sociable, I tossed him a chunk of bread; he obviously had the hikers dialed in.

I checked out the insides of the stone hut, and noted that it would be a remarkable place to be in the event a winter storm moved into the area.  A plaque on the inside of the building noted that the structure was constructed in 1931 by members of the Sierra Club in memory of John Muir and as a respite for hikers.

From this vantage point in 1895, Theodore S. Solomons, a charter member of the Sierra Club, photographer, surveyor and mapmaker, named four of the prominent peaks around Muir Pass after the four major proponents of the theory of evolution – Charles Darwin, Thomas Huxley, Herbert Spencer, and Alfred Wallace.  Solomons was also given credit for surveying and laying out much of the route that would become known as the John Muir Trail.

The terrain around Muir Pass was above tree line and resembled a moonscape, and it continued in this mode for the next four miles after dropping off the summit.  The trail leading off the summit was lost beneath a two-foot layer of snow, resulting in multiple paths as individual hikers searched for the best route down to Wanda Lake.  The trail extended down into Evolution Basin, filled with giant boulders and small lakes and continued dropping in elevation until it reached Evolution Valley, where it flattened out and followed along Evolution Creek as it meandered through the valley.

In high water, this valley contained one of the most treacherous and dangerous river crossings on the entire PCT, and although this was a low-snow year and the stream crossings thus far had not been hair-raising, I was still quite anticipatory about what I would find at the crossing.  I didn’t have long to wait; as I walked through a meadow beside the stream, I saw a sign, etched in metal, that said, in effect,

"If Evolution Creek was running high, take this path through the meadow and cross the stream at this point."  I passed on and within a half mile come to the stream crossing itself.

The stream where the PCT crossed it was quite wide, and on this day was less than knee-deep.  However, high-water marks around trees lining both sides of the creek indicated that the stream could be as much as six to seven feet deep in a heavy runoff.  In a couple of days, at Tuolumne Meadows, I would meet a former thru-hiker/trail angel named Thumper who operated Trailwiki.org.

As I and other hikers were enjoying hot dogs and drinks provided by Thumper and his wife, Stumbling Goat, he told us about his PCT hike in 2011 – a heavy-snow year, and how he had to cross the stream using his air mattress.  He said that after inflating it, he balanced his pack on top of it and paddled across.

Leaving the meadows of Evolution behind, the trail dropped a thousand feet to the San Joaquin River valley floor and followed it to its intersection with Piute Creek, where a footbridge provided safe passage across the roiling waters.  A side trail off to the left leads down to the Muir Trail Ranch, but I follow the trail north, up several switchbacks to Sallie Keyes Lakes and Selden Pass.  On the north side of Selden Pass, the trail follows Bear Creek, which is another creek with a fearsome reputation for crossing. It’s wide like Evolution Creek, but swifter and with a rocky streambed.  To make a safe crossing, a hiker needs to face upstream and cross sideways, leaning into the current.

Trekking poles help to balance and one should have at least three points of contact with the streambed before advancing sideways.  High-water years will find the stream at waist-deep or higher and sometimes a backcountry ranger will string a rope between trees on opposite sides of the banks for hikers to hold on to.  On this day, the stream was less than knee-deep, and I counted my blessings.

I push on to Silver Lake Pass but can’t reach it by nightfall and have to make camp in a meadow, which turned out to be a big mistake.  Meadows generally mean moisture, mosquitoes and condensation, and I lucked out on three accounts.  I went for the meadow which was just a hundred feet off the side of the trail, as it was the only flat place around, but the mosquitoes ate me alive before I was able to put up my tent.

With the tent up, I pulled my heavy pack inside and quickly zipped the bug netting shut, but there were still a ton of the flying bombers inside the tent.  I inflated my air mattress, lay on it, and began swatting at the flying pests.  Before long, the bottom of the tent was littered with the tiny carcasses of Messerschmitt mosquitoes.  That night, the temperature dropped and the moisture that rose from the meadow condensed in a sheet of ice on the outside of the tent.  The next morning, I waited for the sun to come up and melt the ice before I tried striking the tent and stuffing it in its stuff sack. 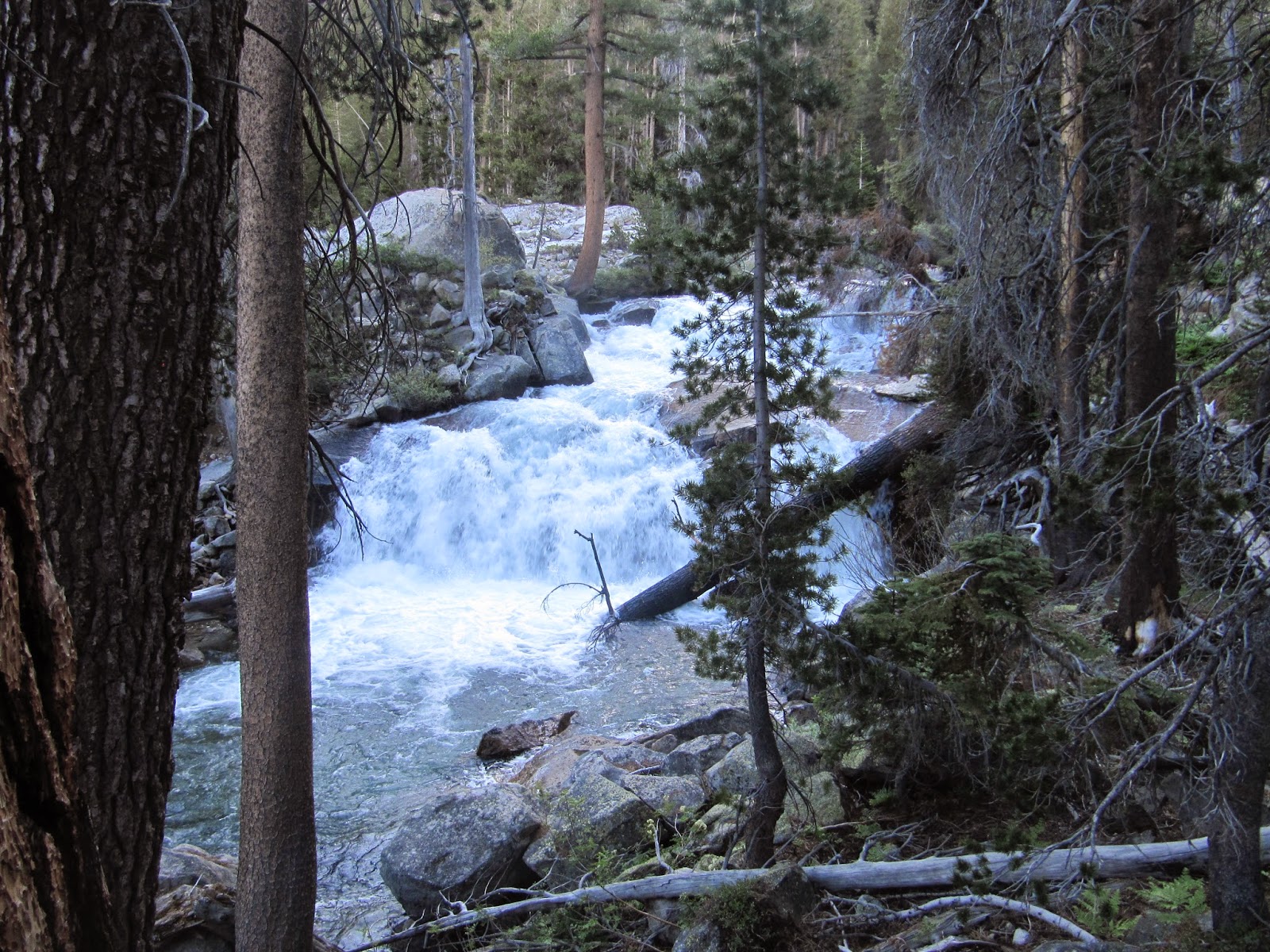 This is what makes a trip through the Sierras so fun; just watching the sheer volume of water cascading down the mountains. 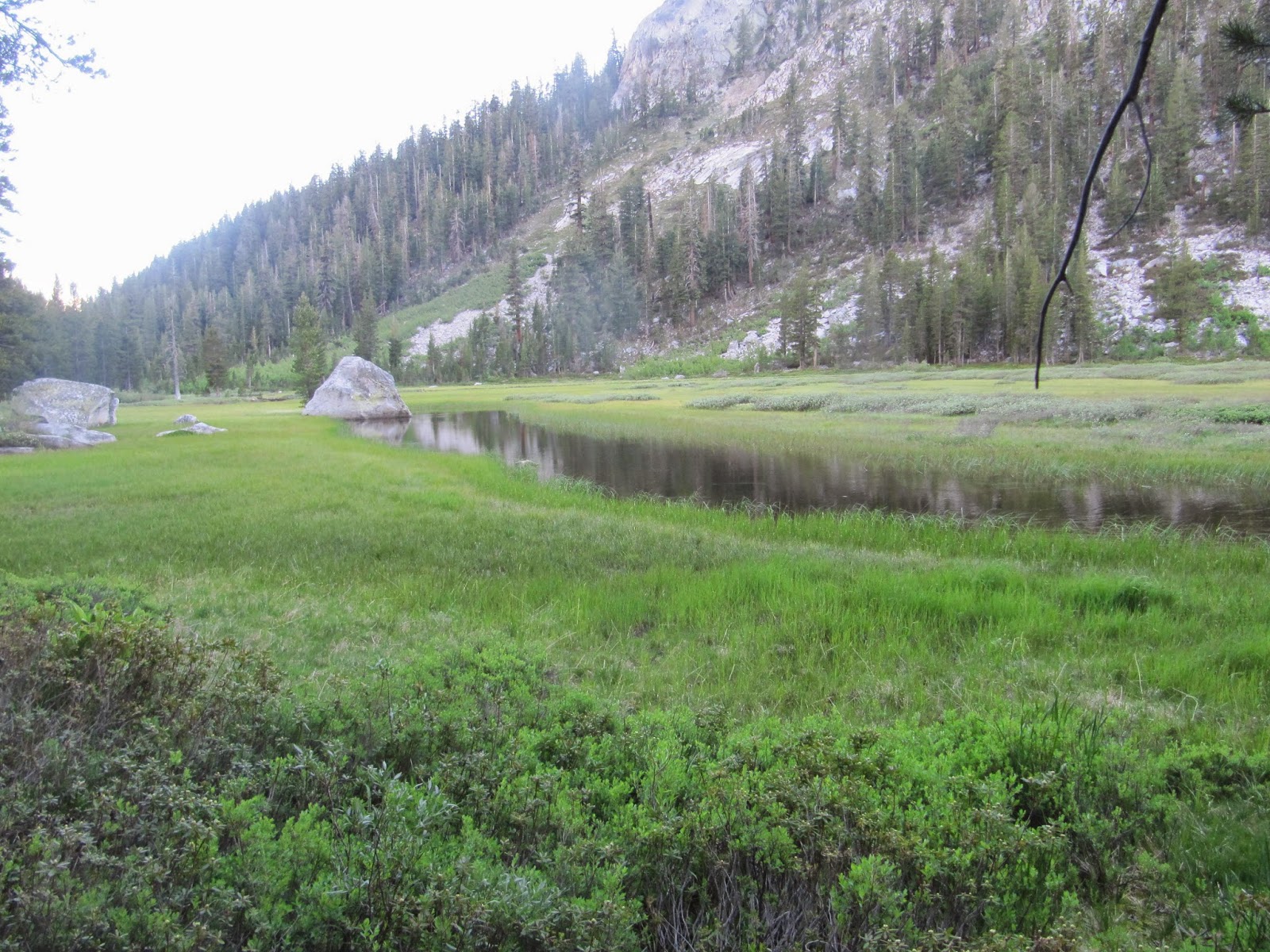 From Muir Pass, the trail dropped in elevation until eventually I was in Evolution Basin. 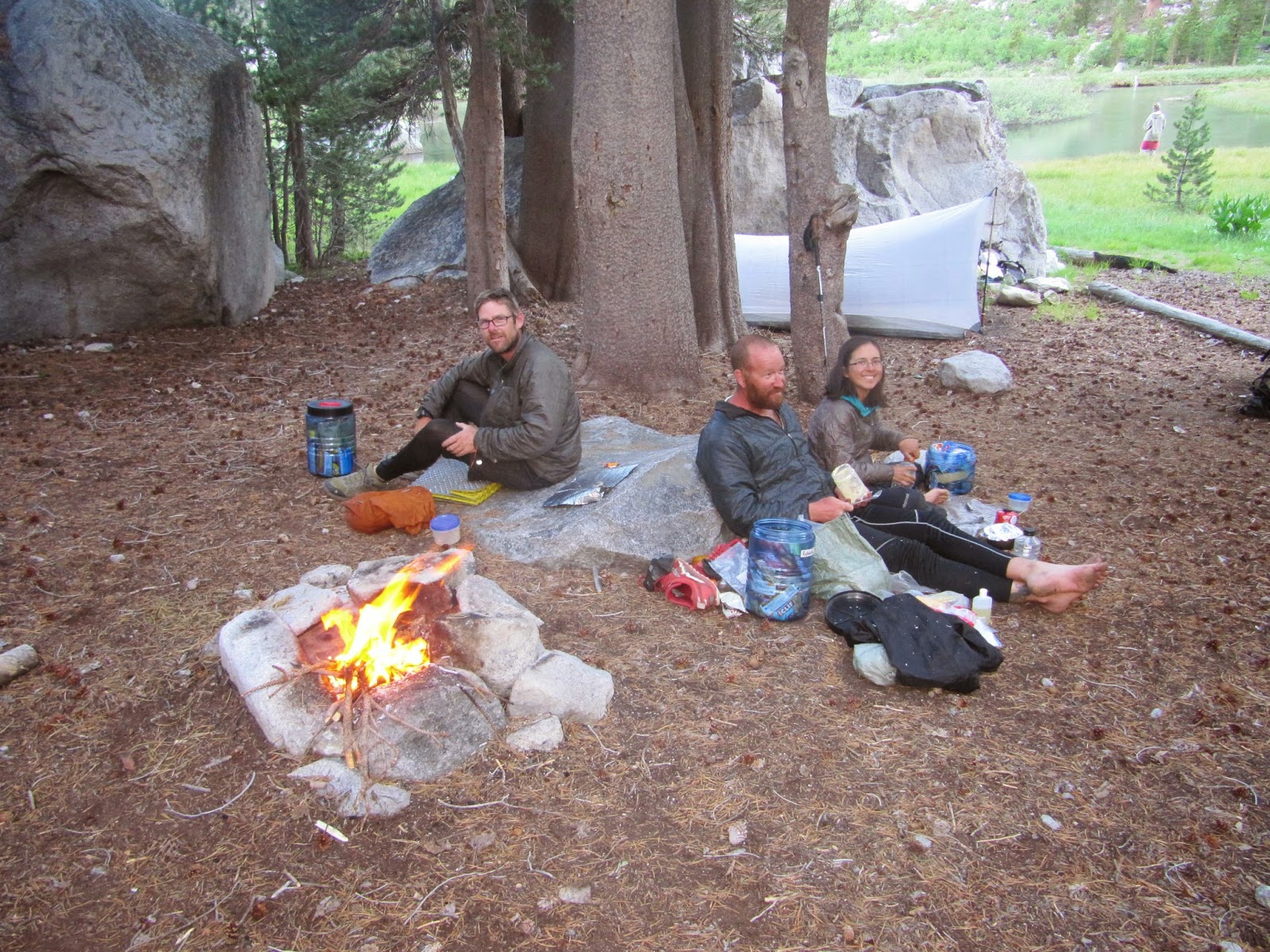 B-Rad, Spoonman and Skinny D have stopped for the night and are camped by the meadows in Evolution Basin. 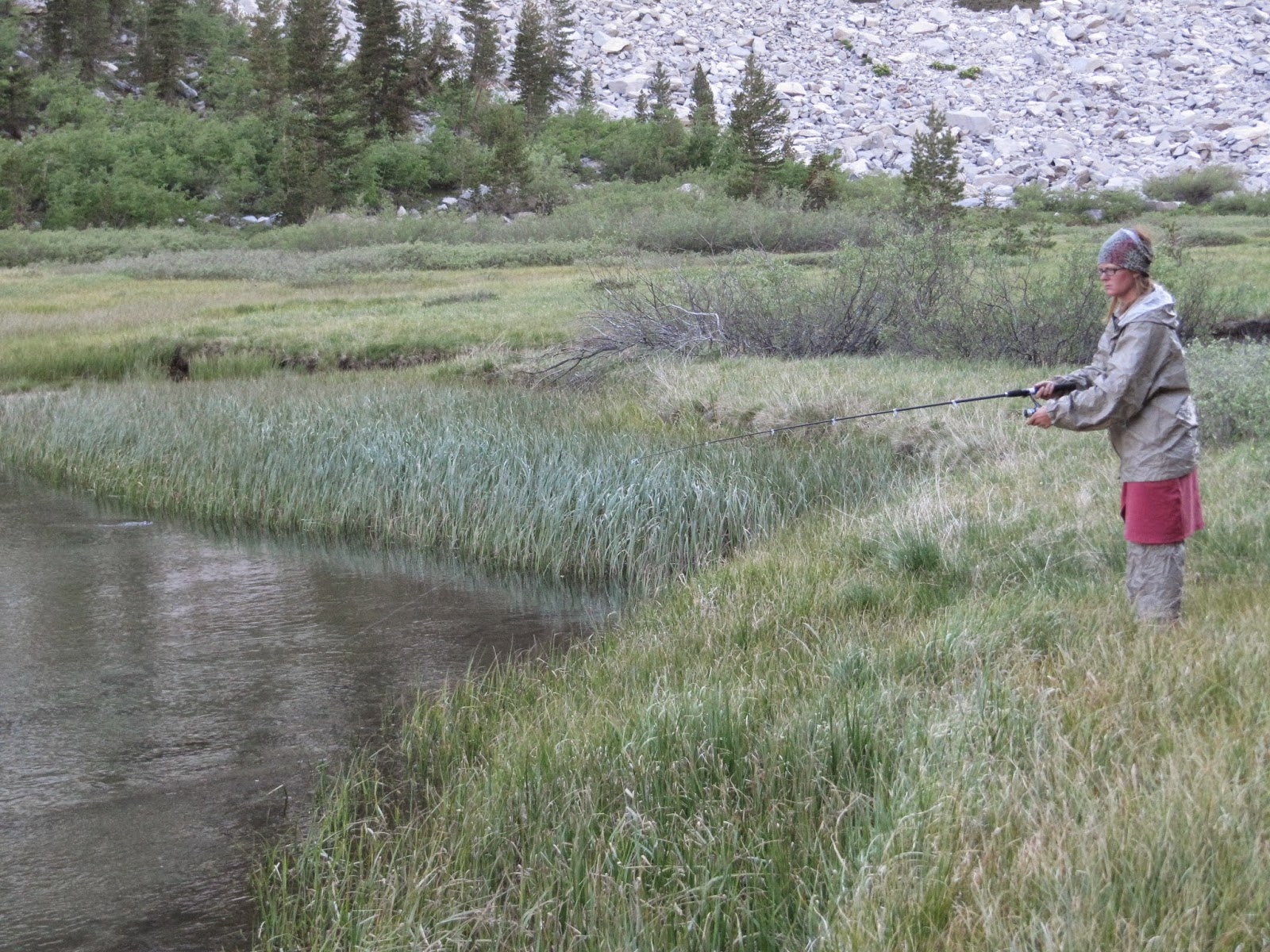 Siesta came prepared to fish. The fish in the stream were less than 10". 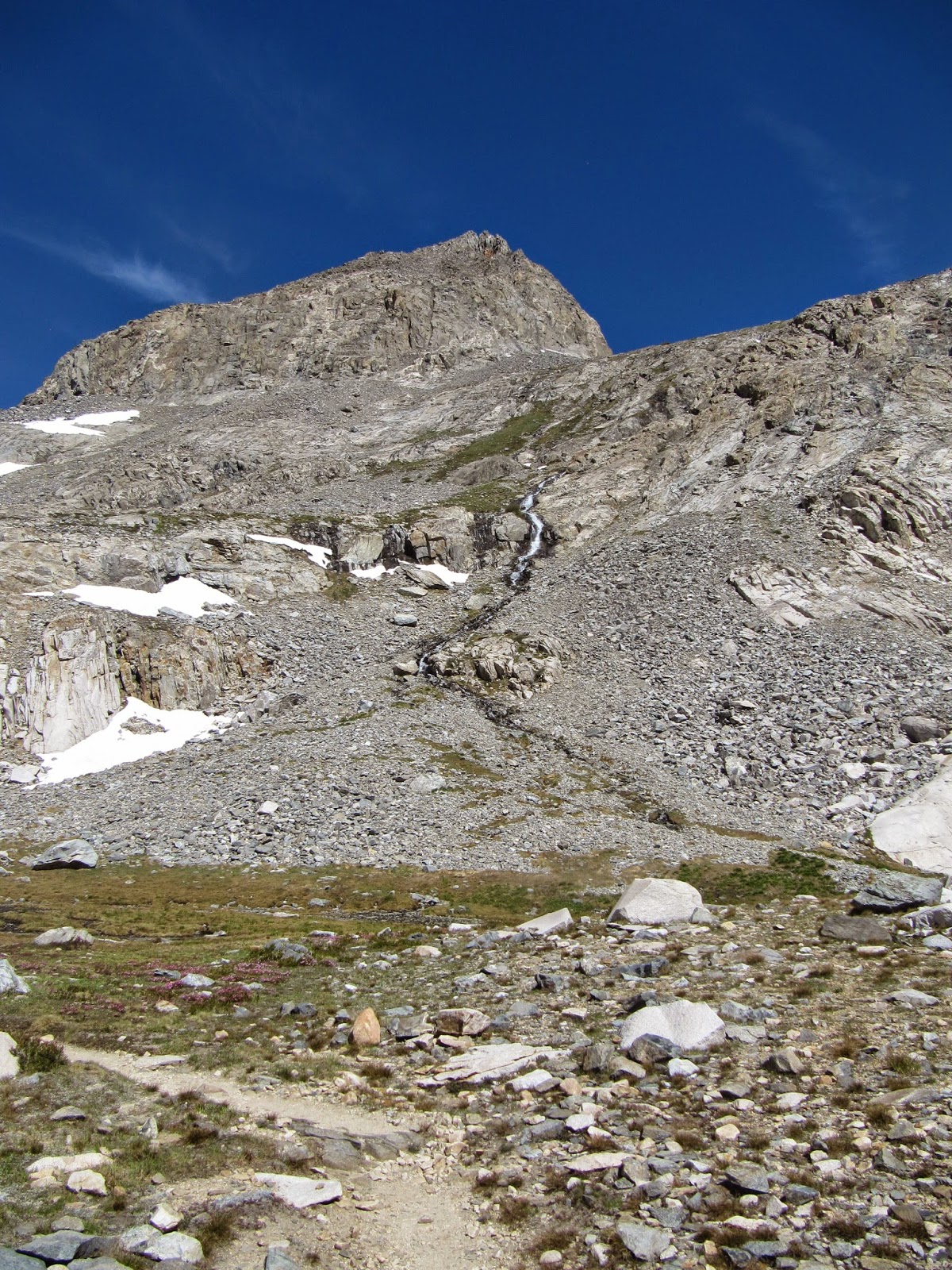 I hiked over so many passes in just a few days, that two years later, I can't put the terrain with the name of the pass. 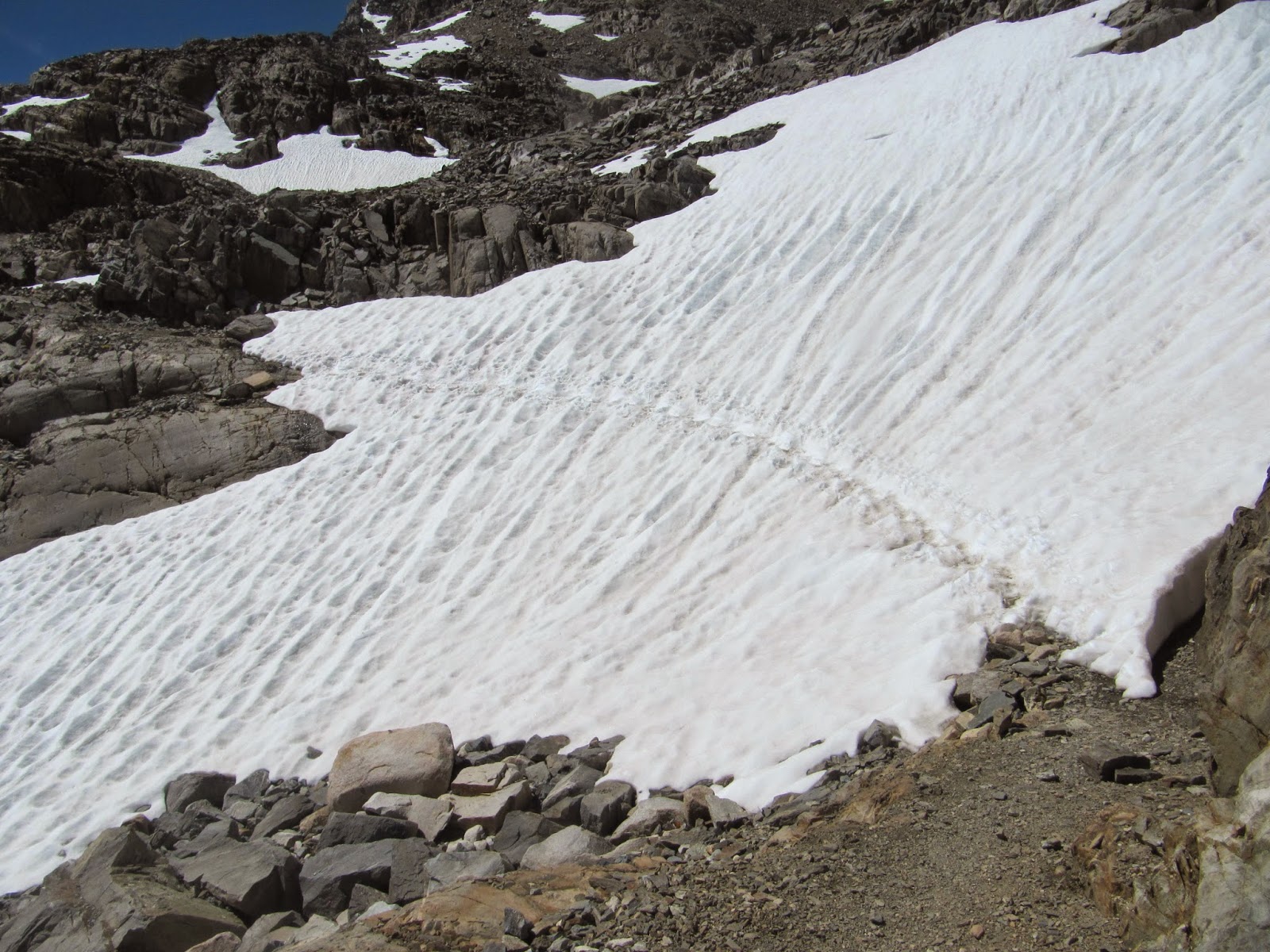 Ascending this pass meant crossing over a snow field. 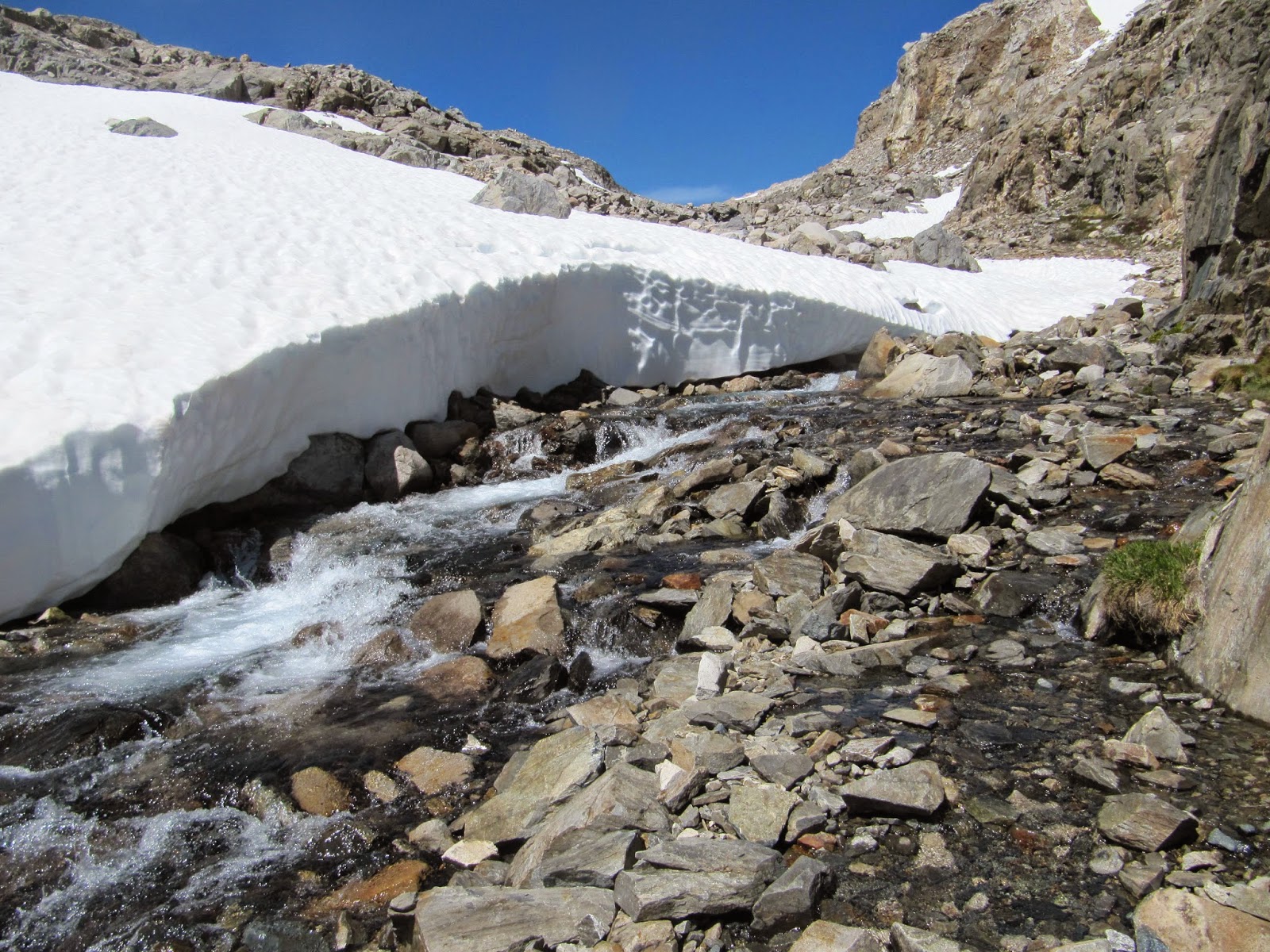 There was so much water flowing over the trail that I temporarily lost it. 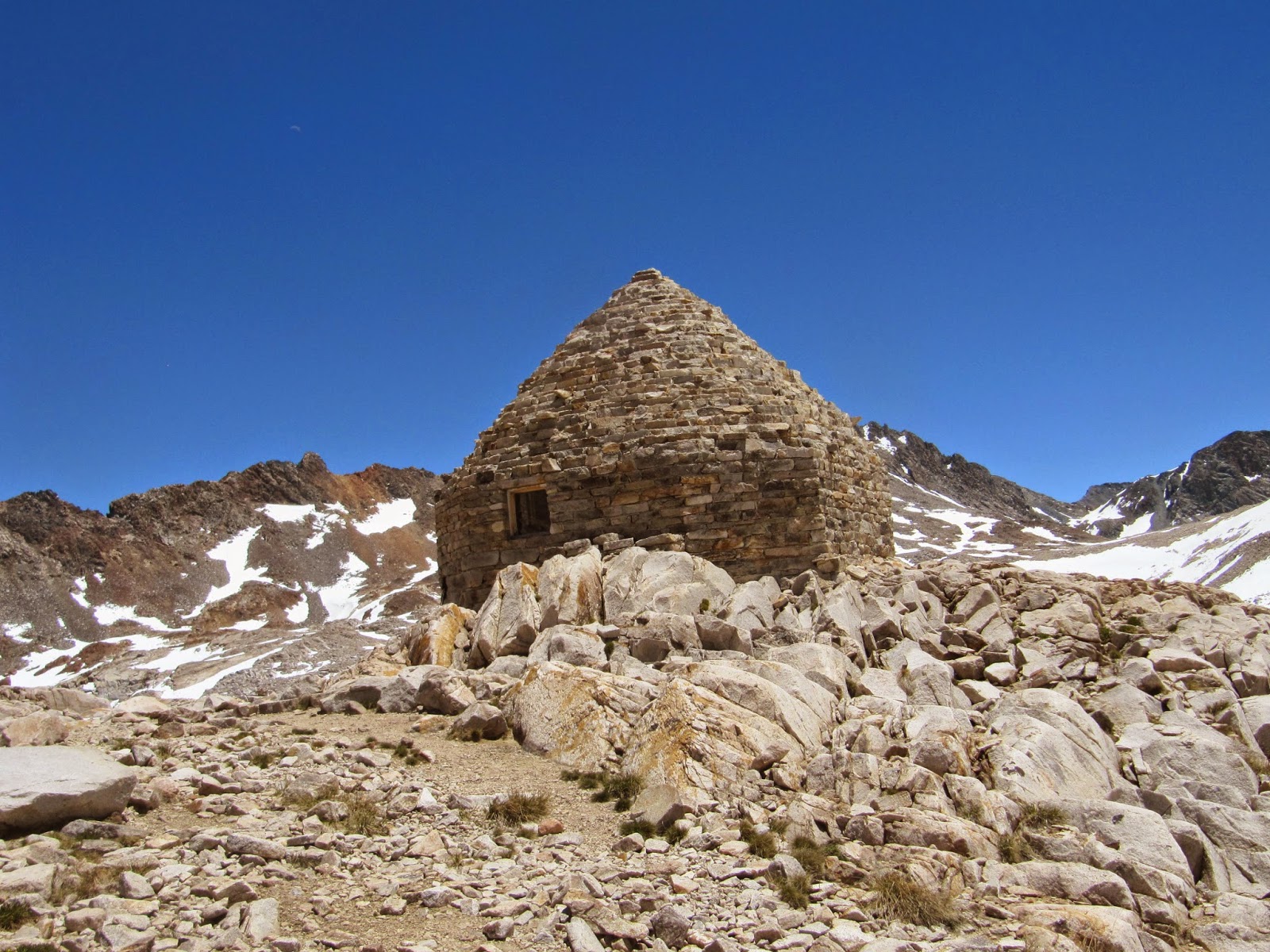 Muir hut would be a welcome sight in the mist of raging whiteout here on the summit. 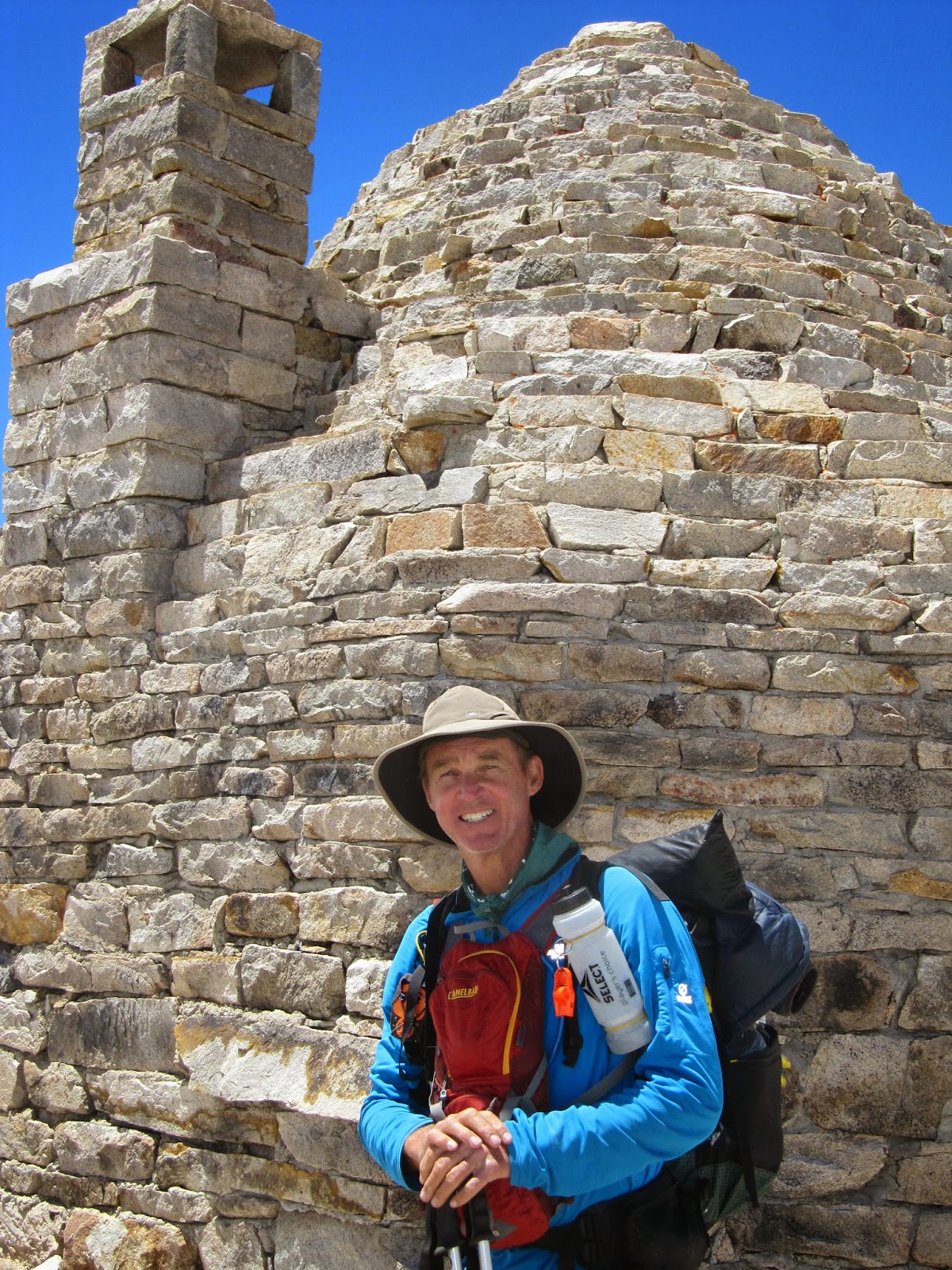 I had to have the obligatory photo of myself next to Muir's hut. 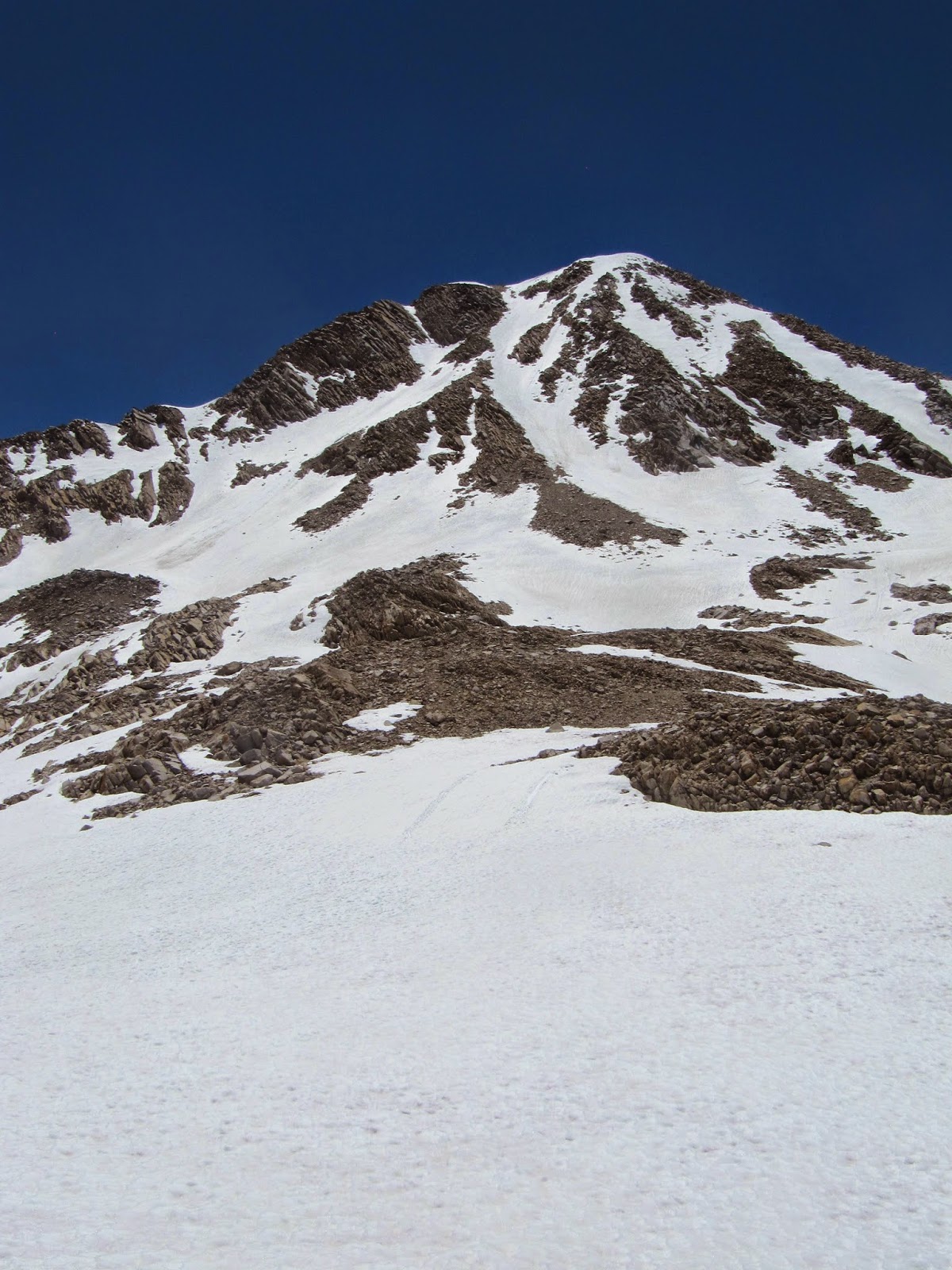 Just one of the many snow covered mountains along the Muir trail, which overlaps the PCT. 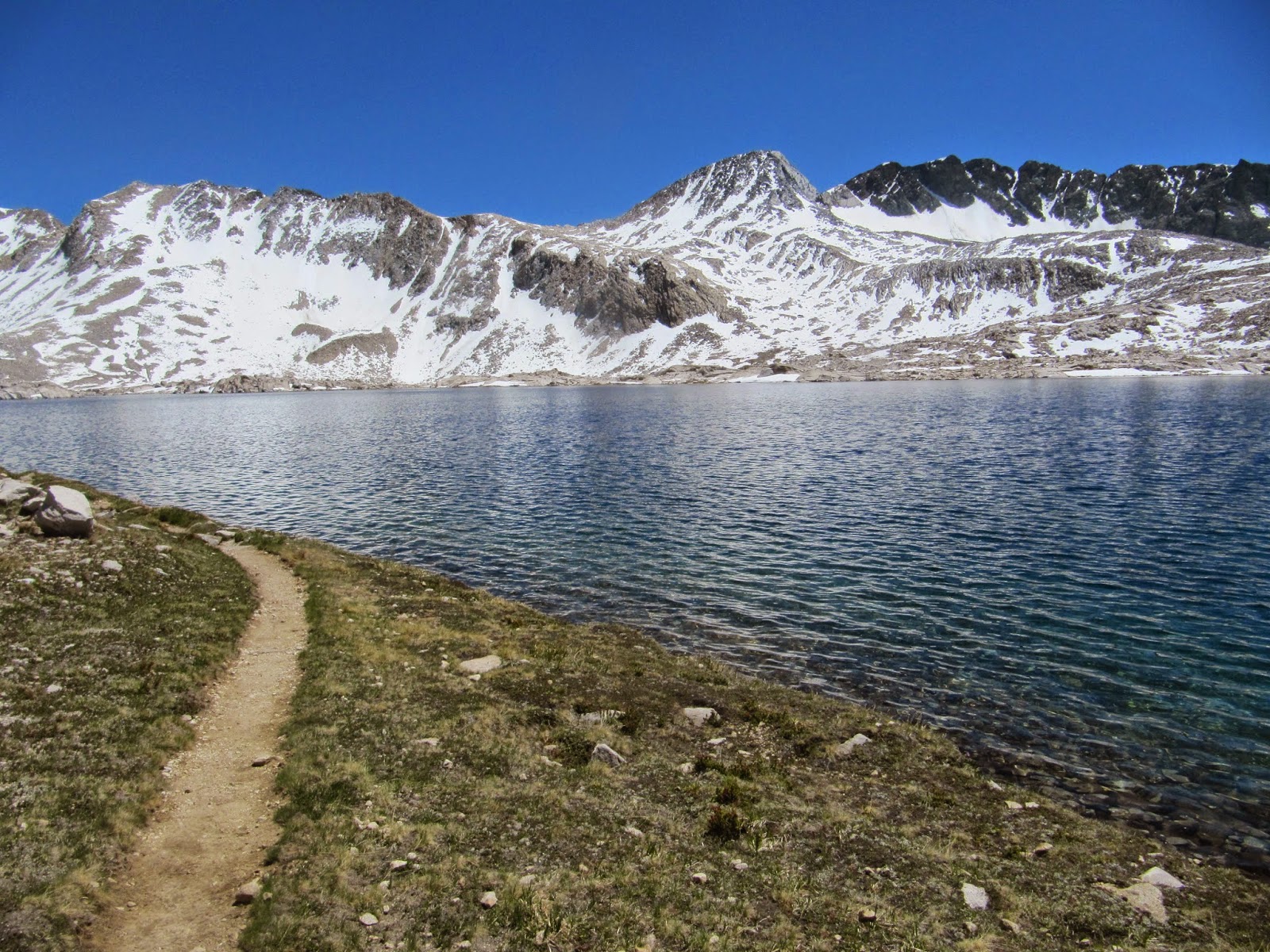 I believe this is Helen Lake on the path leading up to Muir Pass. Helen was one of John Muir's daughters. 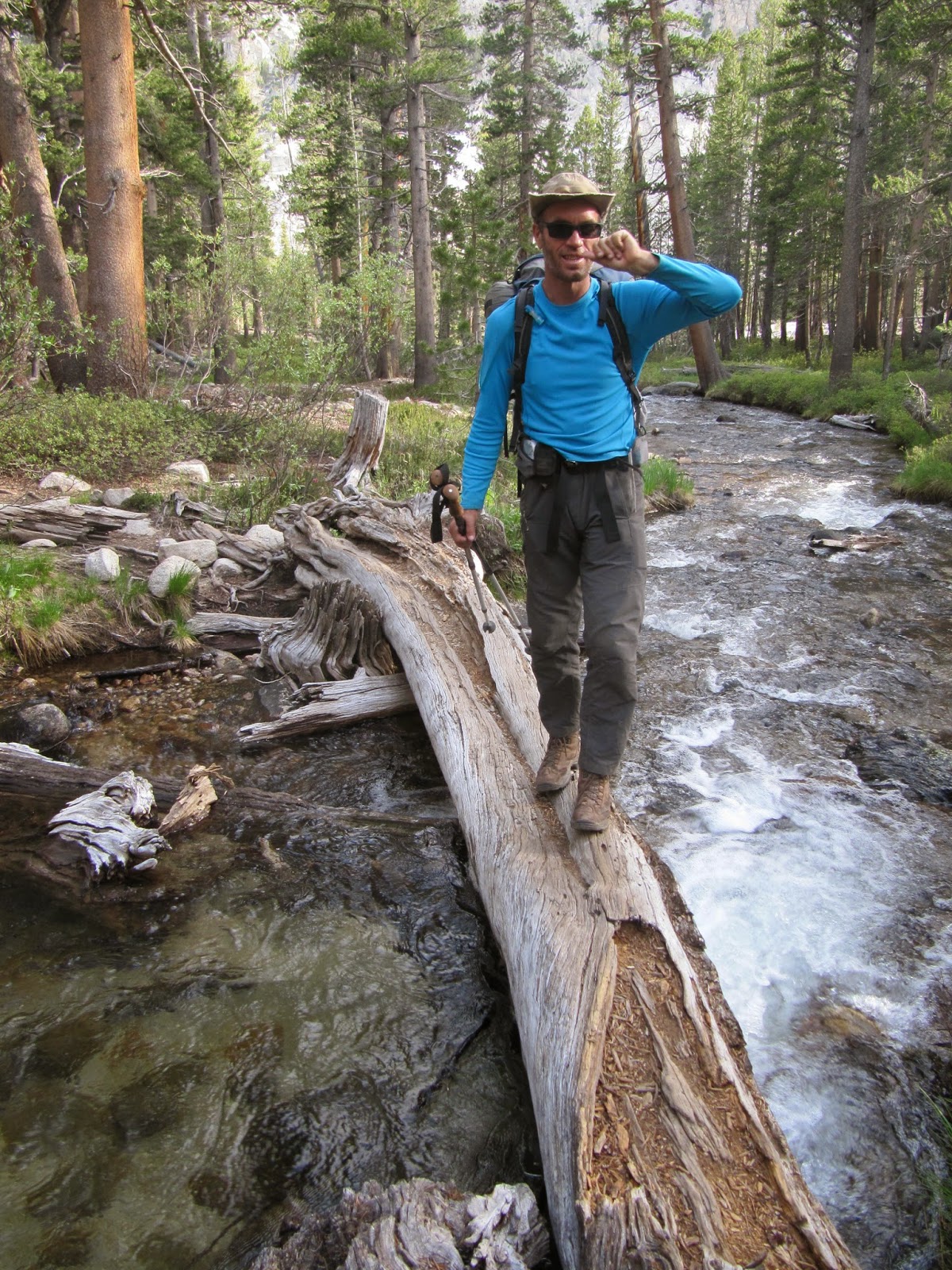 Doing a balancing act while crossing this stream. 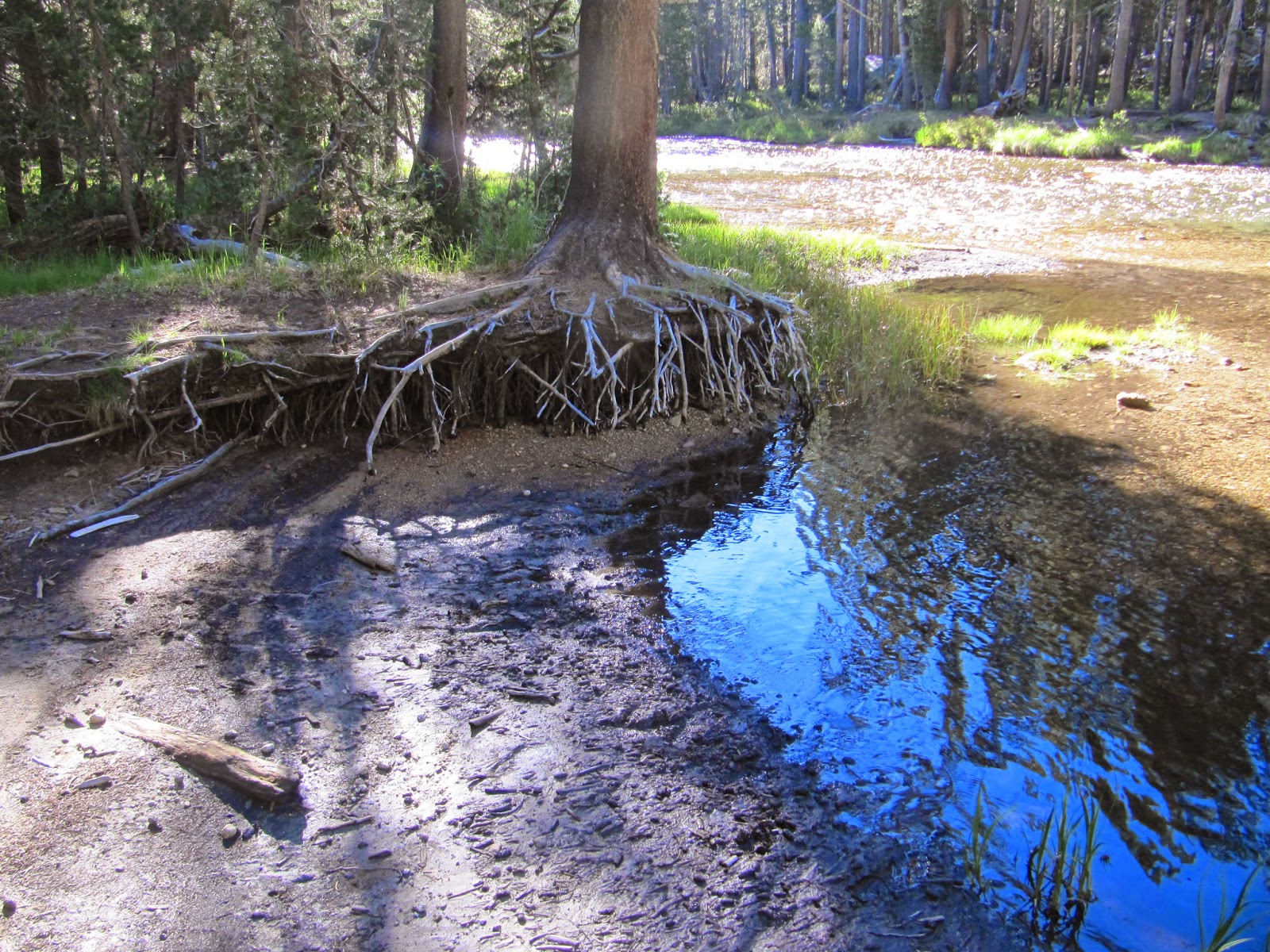 This is the notorious Evolution Creek, that causes so much anxiety when the water is high, as it would be if it were flowing above the roots of this tree. Today, it was only knee deep. 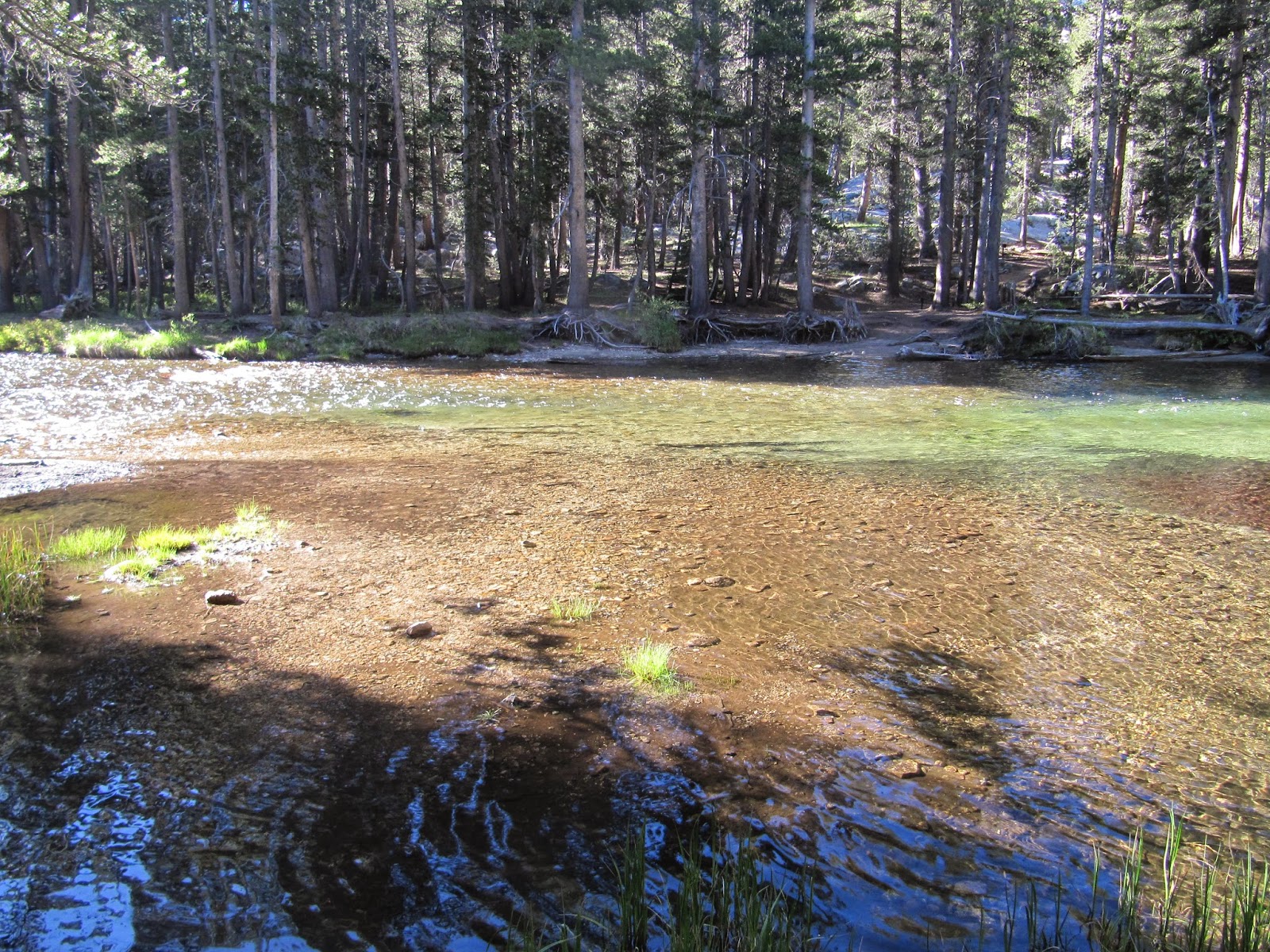 Evolution Creek is wide, making for a treacherous crossing when the water is in high run off mode. 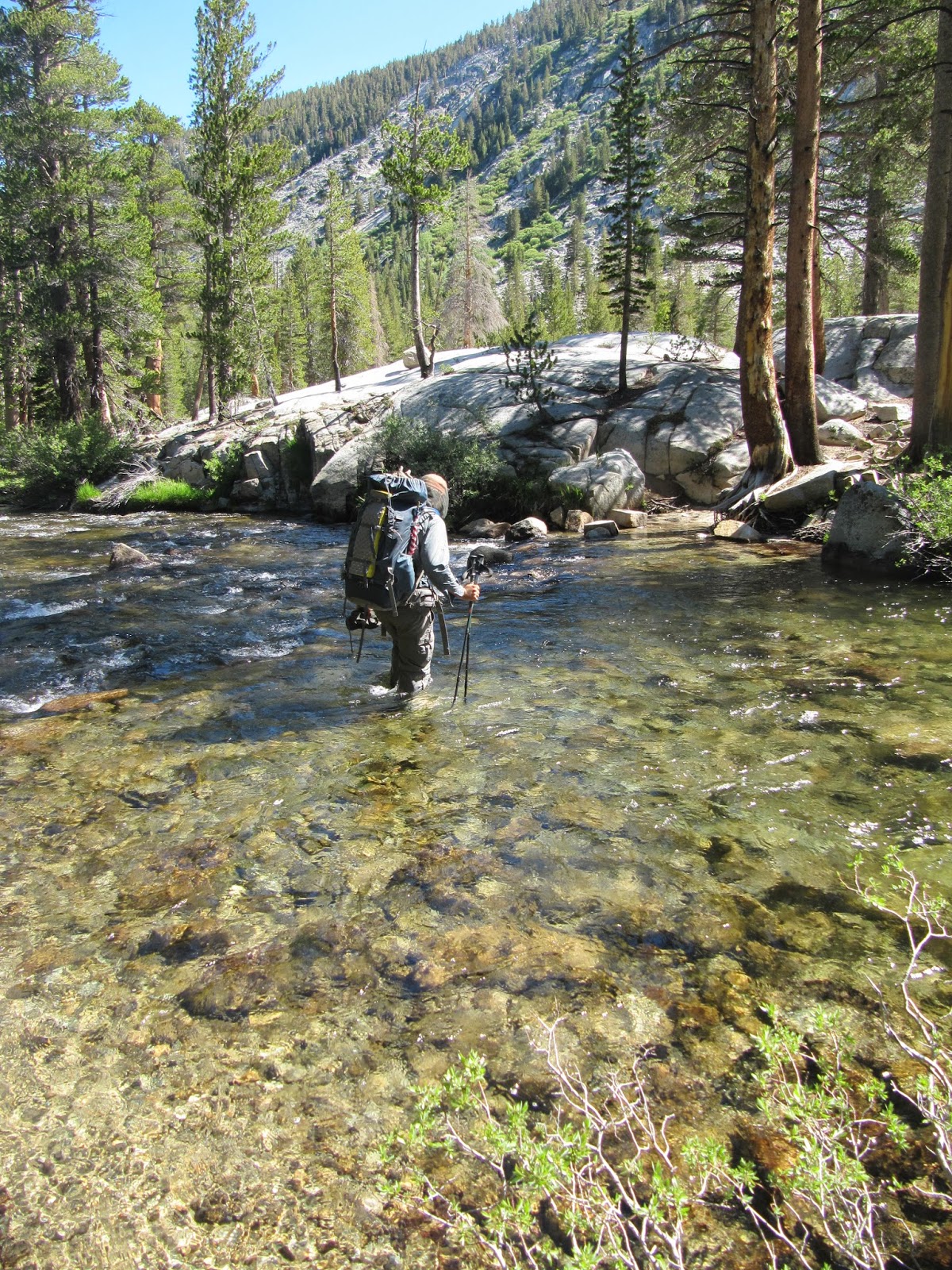 I believe this is the Bear Creek crossing, and on this day,it was no more than knee deep. 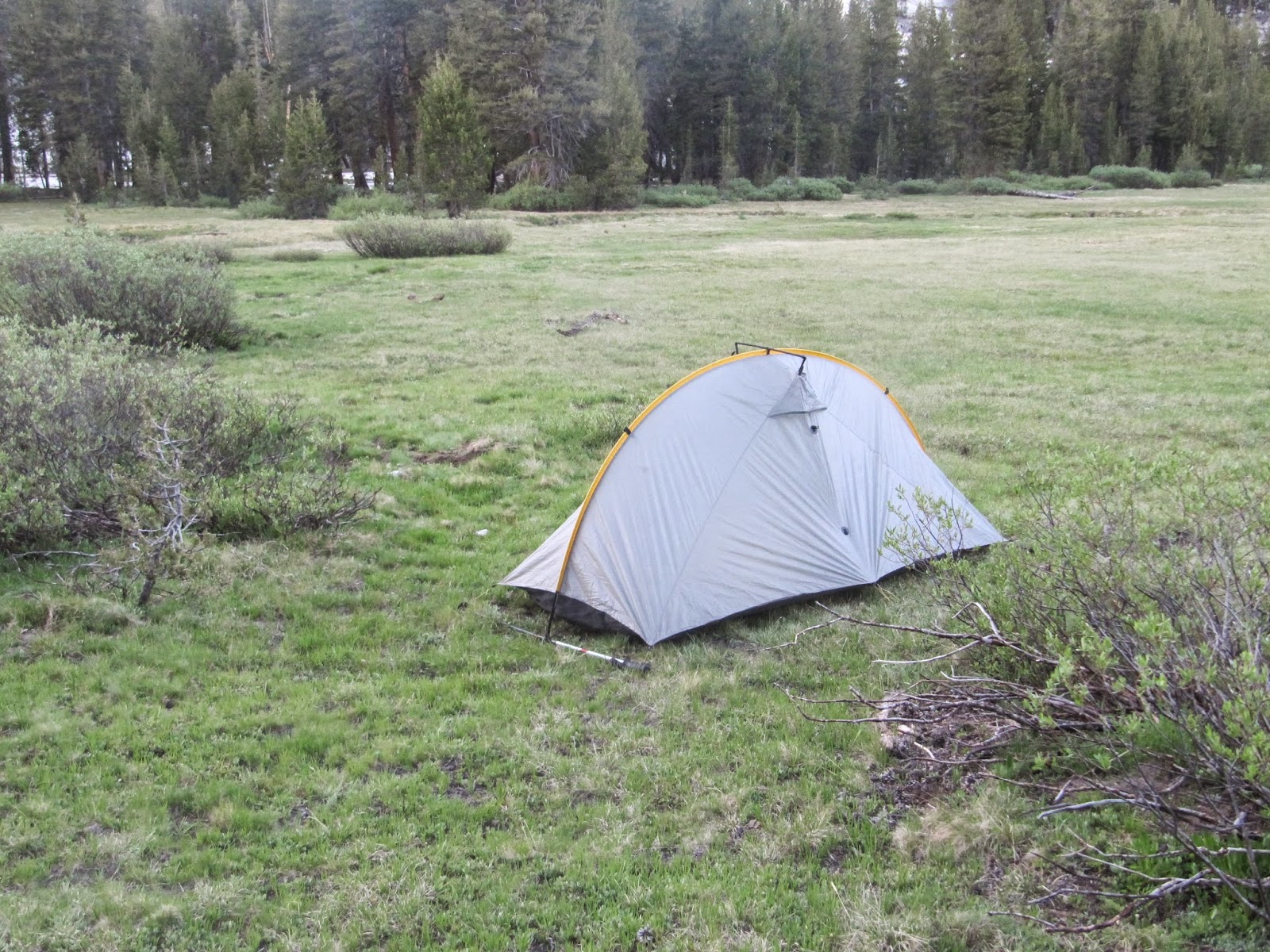 The meadow was the only flat place I could find to erect my tent. But it meant hordes of mosquitoes, moisture and icy condensation on the inside walls of the tent. 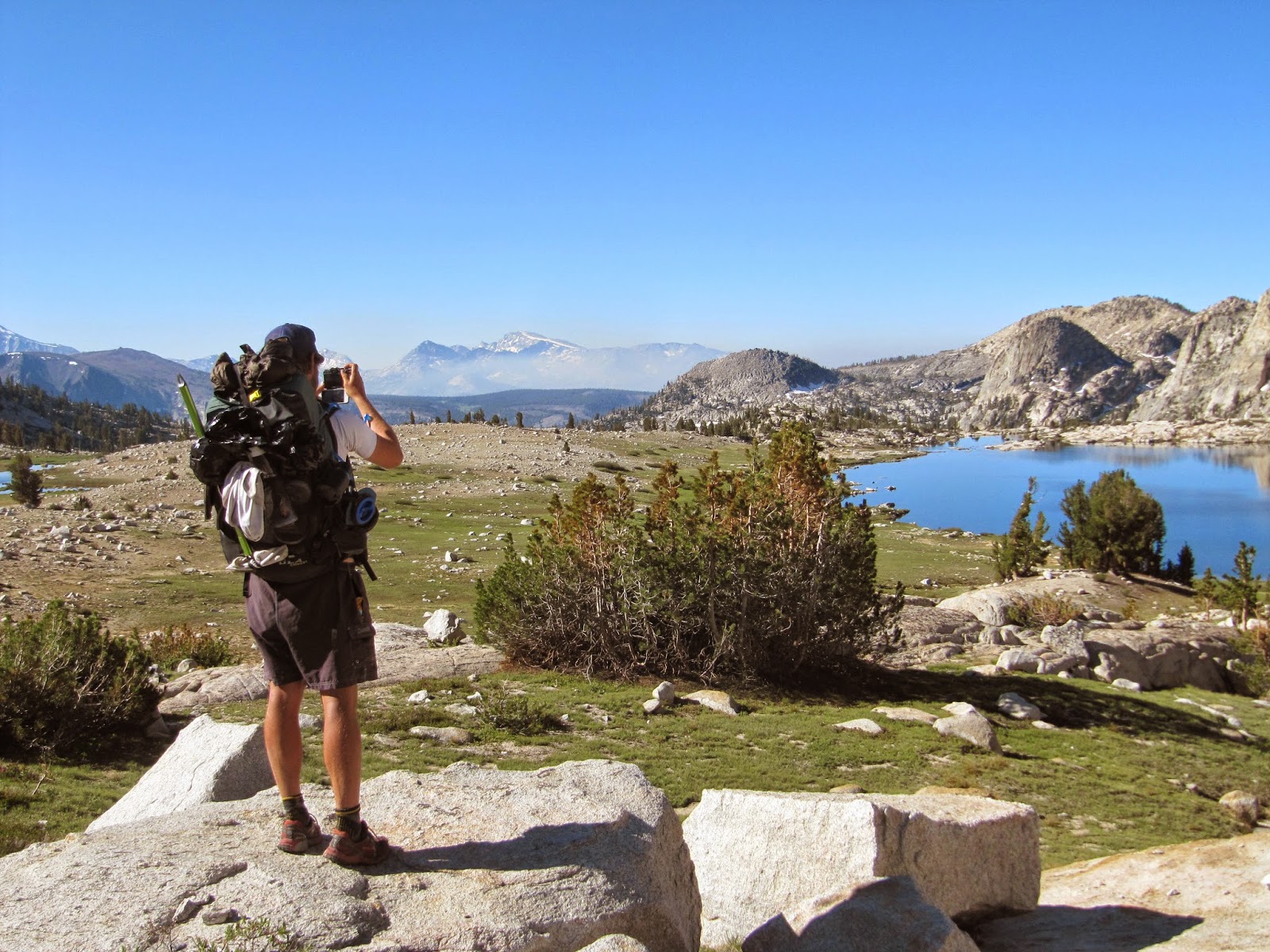 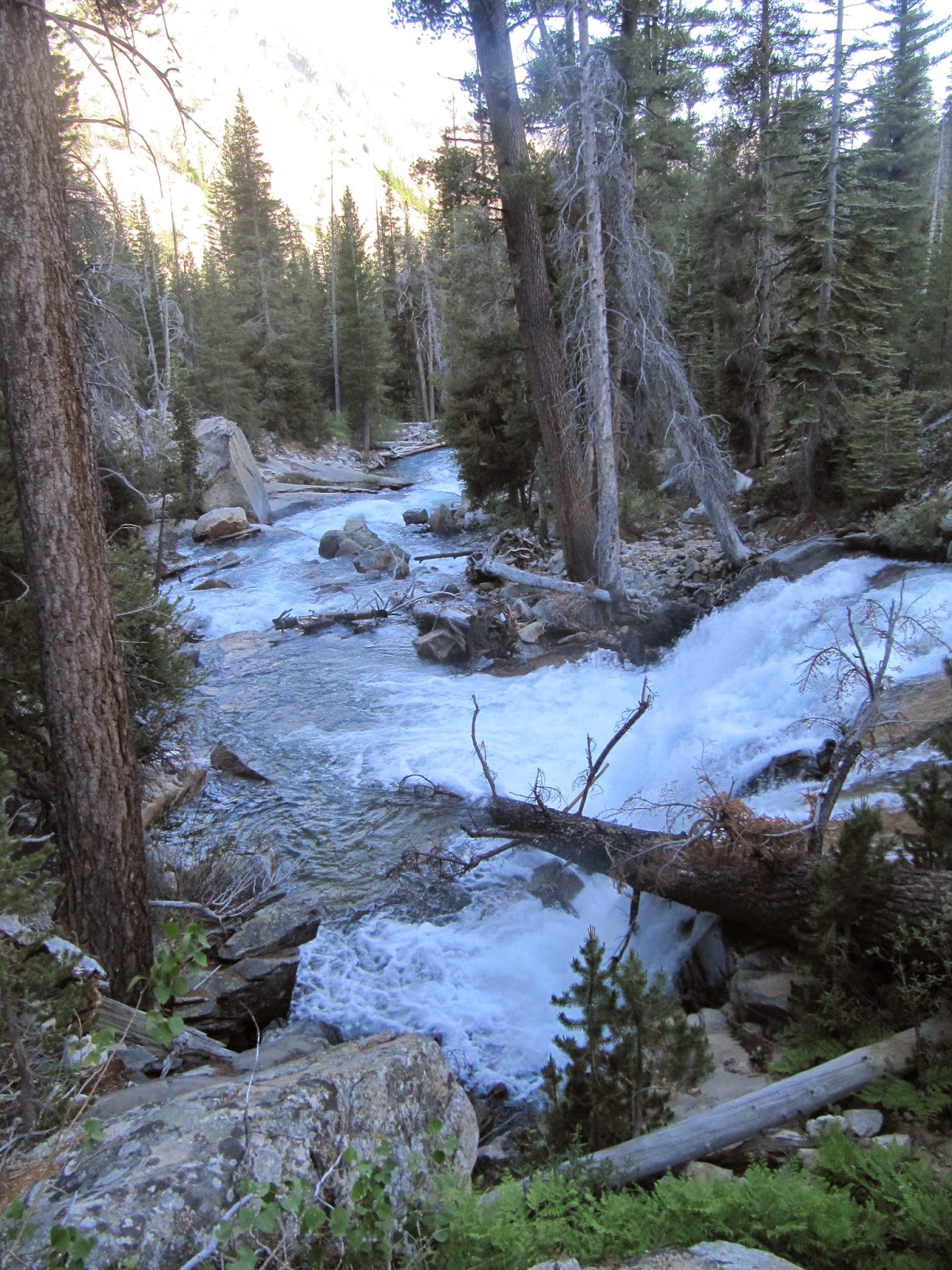 Two large streams coming together to form an even larger one.