Jodie had rented a cabin in Truckee, and after visiting the grocery store in town, we proceeded to our little cabin in the woods.  We would spend two full days at the cabin, where I would rest and enjoy the companionship of friends and family.

Both Ken and I were high school buddies, graduating in 1961, the same year the Berlin Wall went up, and both of us turned seventy this year.  To celebrate, Jodie brought a three-quart ice-cream maker and made fresh peach and pineapple ice cream, along with a scrumptious chocolate cake whose secret ingredients include baking soda and plain yogurt.

The next day being the Fourth of July, we decided to take a road trip and visit the old mining town of Virginia City.  But first, we needed to pay a visit to the REI in Reno so I could purchase a new pair of pants.  The trail was hard on pant fabric and I had already worn out two pairs of pants and now needed a third pair.

Back at the McDonald's in El Cajon in Southern California, I had noticed that Nurse Betty was wearing pants made with Spandex stretch fabric, and when questioned about the pants she said that the fabric held up quite well; in fact, in hindsight, Nurse Betty wore the same pair of pants for the entire length of the trip.  So, that’s the kind of pant I went looking for, and REI had what I needed. The pant was an REI brand, manufactured with stretch fabric and I wore it for the next sixteen hundred miles.  I still have the pants, and continue to wear them when I hike.

Virginia City was just down the road a piece from Reno, and we arrived just in time to see the Fourth of July parade.  Virginia City was a tourist town and we enjoyed playing the part of tourists, walking in and out of frontier-style stores selling everything from antiques to new Stetson hats.
Lake Tahoe was the big attraction for this area, so we took the long way back to Reno via the drive around the south end of Lake Tahoe.

I had been carrying my bear vault for 450 miles, ever since I left Kennedy Meadows South.  Now that Jodie was here, I will give it to her to take back home.  I spent the evening sorting through the resupply box Jodie brought with her, but was unable to finish the job; it would have to wait for tomorrow evening to be finalized.

On this second day of R&R, we decided to take another road trip and visit the next two towns along the trail that will be resupply points for me. Rather than mail the packages from Salt Lake to these trail towns, Jodie brought the boxes with her, and we’re going to leave them with the appropriate people in these towns who accept trail packages.

The next two towns are Sierra City and Belden, both with a long history of gold mining.  In Sierra City, I left the resupply box with the proprietors of the Red Moose Inn, and in Belden, the package was left with Brenda Braaten of Little Haven.

Today, July 6, it was back to the trail.  I had a wonderful two days of rest; my clothes are washed, including my sleeping bag and backpack, so the final embrace with my wife was a little easier on her.  For a few days I won’t smell like hiker trash.  They returned me to the parking lot at Old Highway 40, and at eight in the morning, we parted ways; Jodie and the Cutlers were heading back to Salt Lake City, and I was on my way to Sierra City.  I’ve been on the trail for two and a half months and have traveled 1,155 miles.

Across Old Highway 40, the trail had been blasted out of solid bedrock in order to climb in elevation.  Along the way, several small lakes were encountered, two of which – Lake Azalea and Lake Flora, were on private land and were sources of domestic water supplies.  Within five miles, the trail passed under Interstate I-80 and continued north, past the Donner Summit Roadside Rest Area. 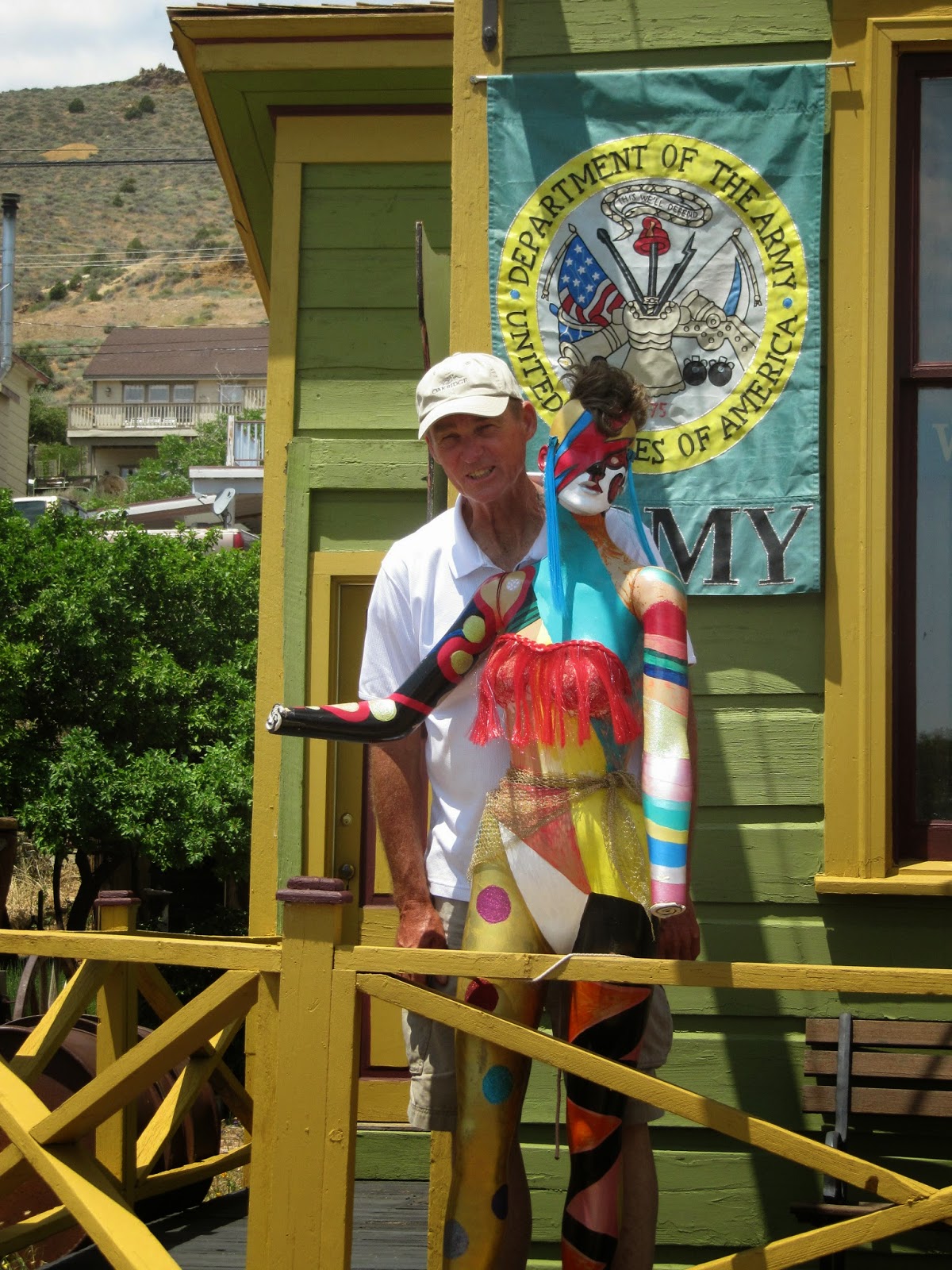 Taking a couple of zero days in Truckee, and being the 4th of July, we drove over to Virginia City and arrived just in time to take in the parade. Virginia City is strictly a tourist town, so one does the tourist thing when visiting. 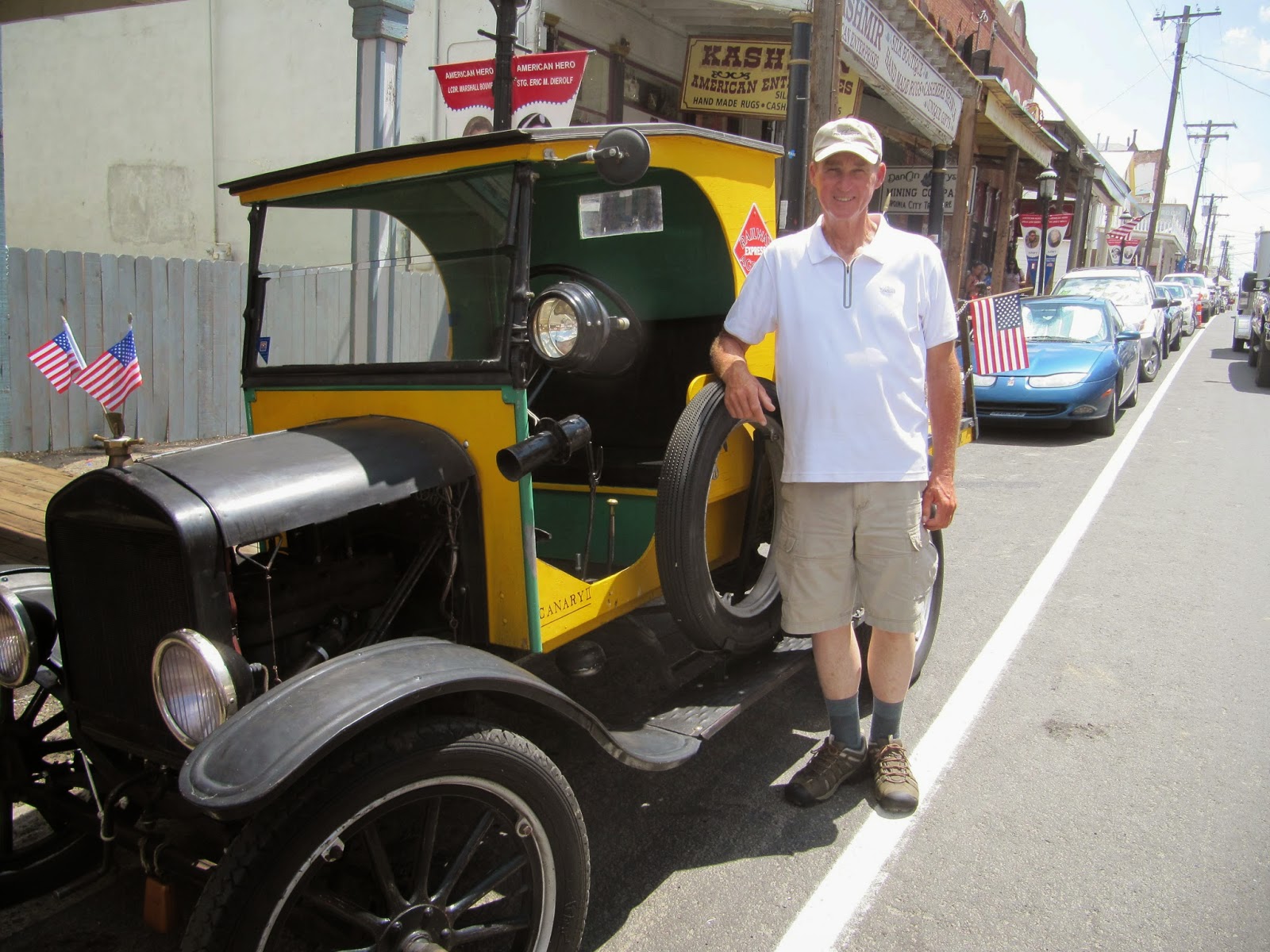 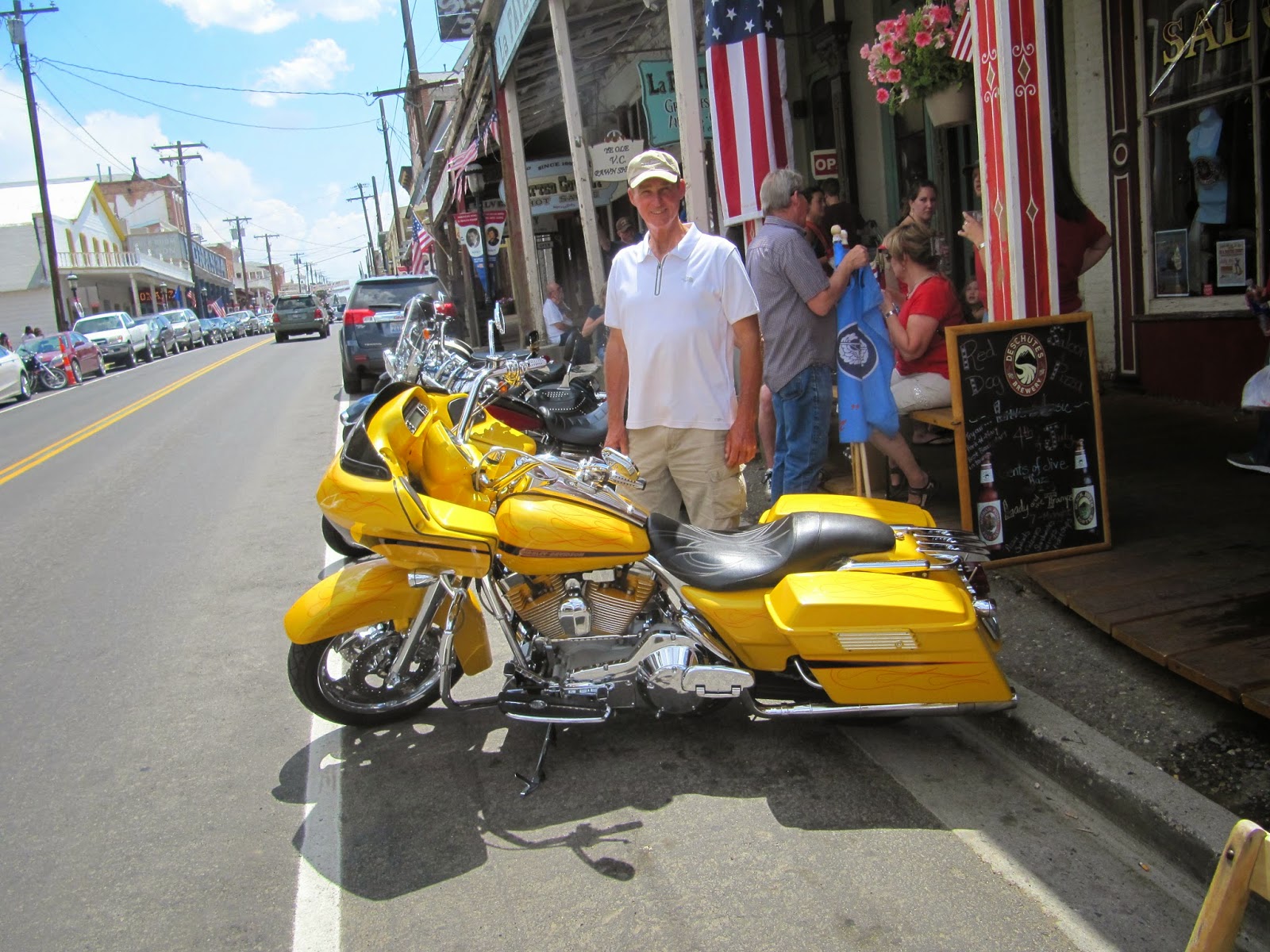 Next time I visit California, I want it to be on one of these large Honda touring bikes. 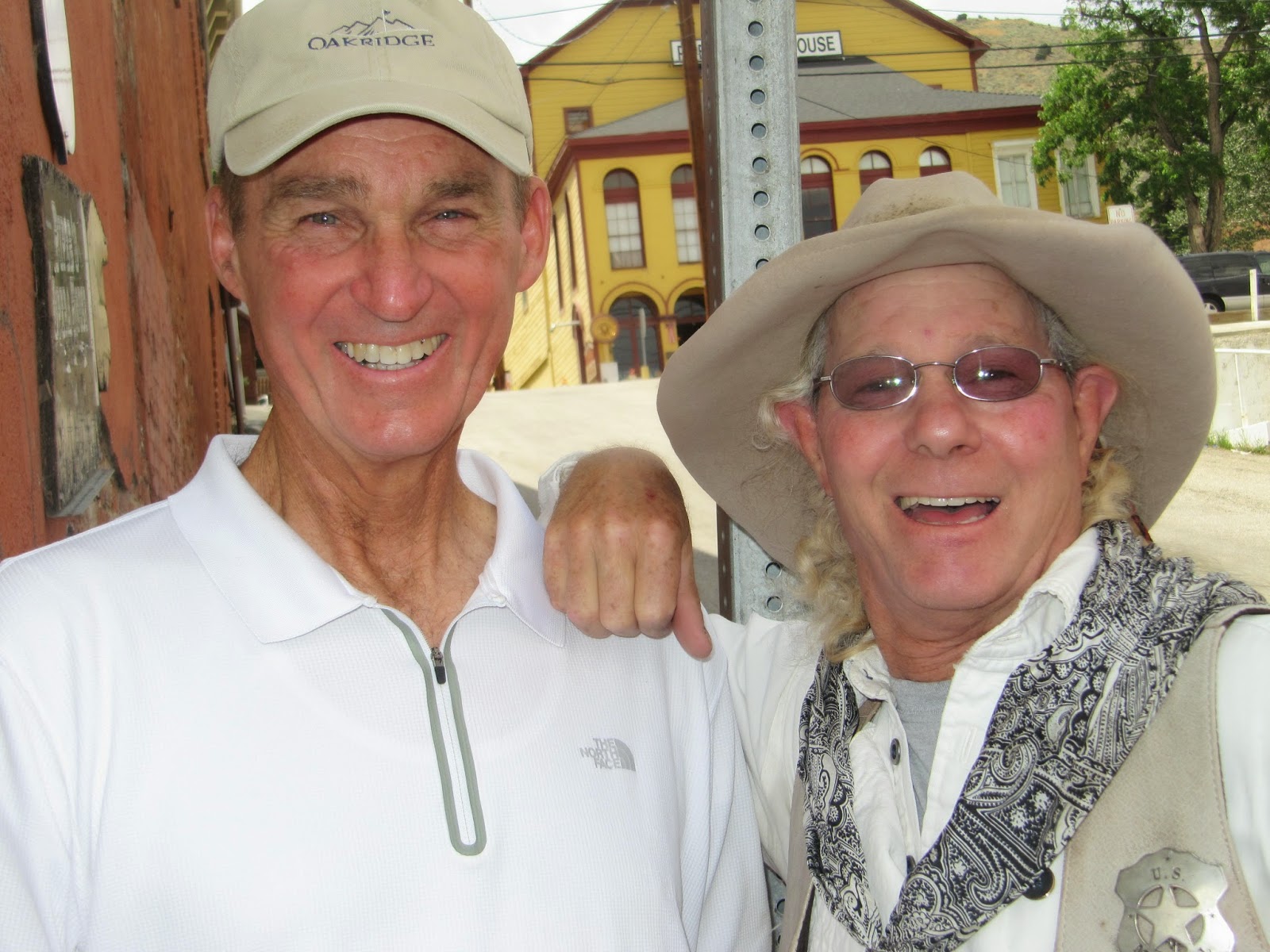 The sheriff insisted I have my picture taken with him. 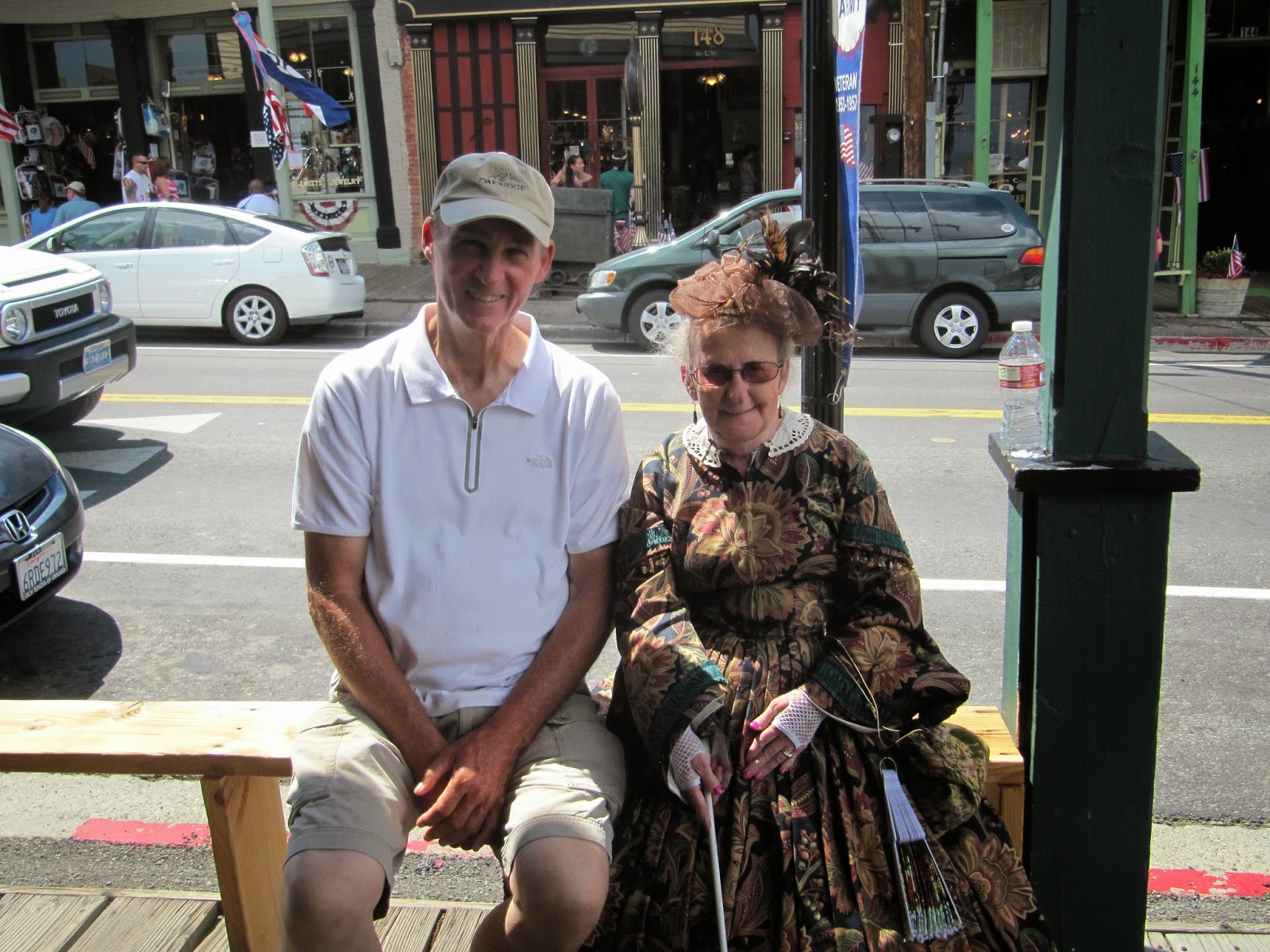 And of course, this little lady, a resident of the town, who always dressed in style for these parada days, also insisted that I have my picture taken with her. 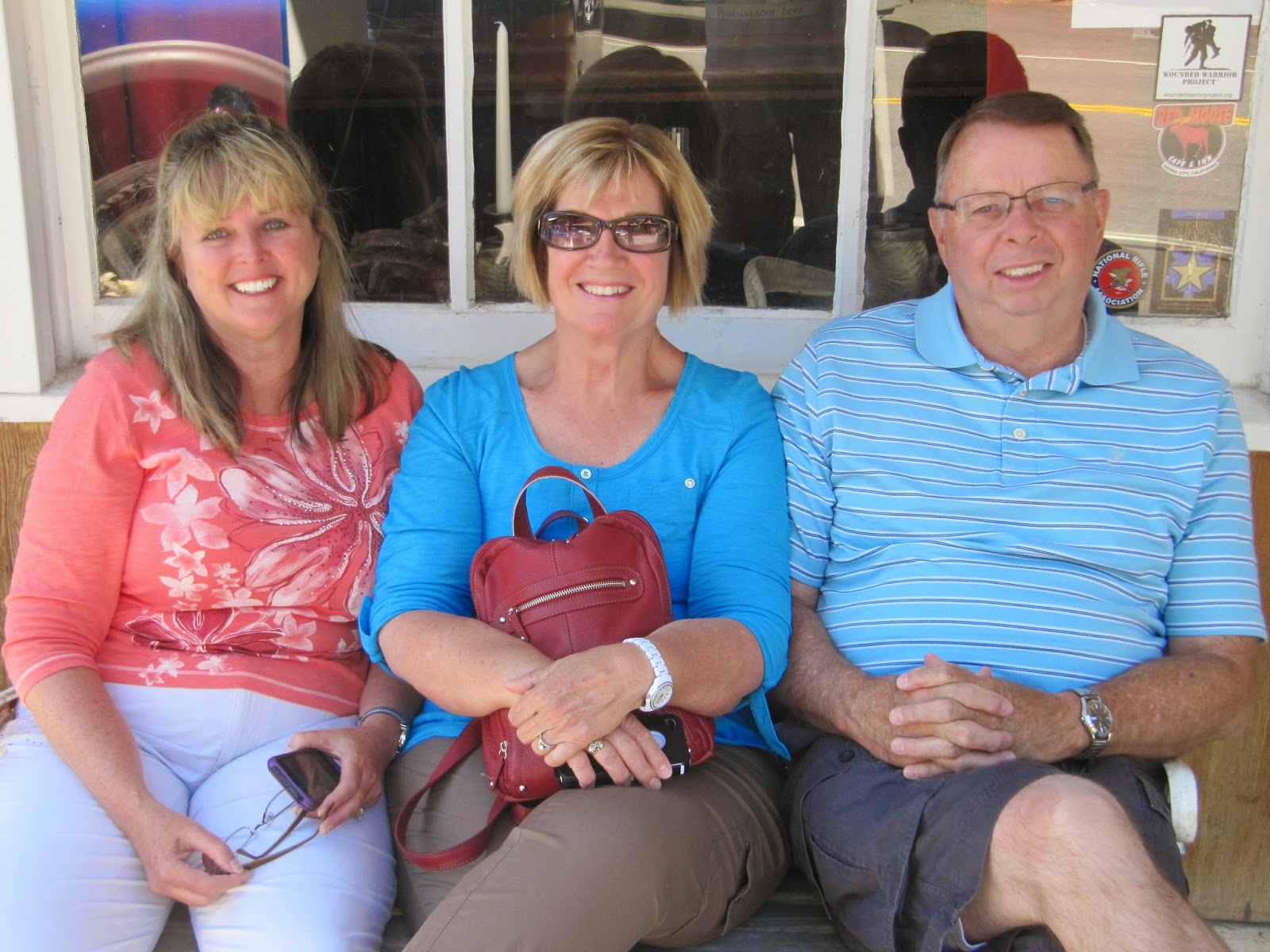 My wife Jodie and friends Ken and Lois Cutler sitting on the porch of the Red Moose Inn in Sierra City. 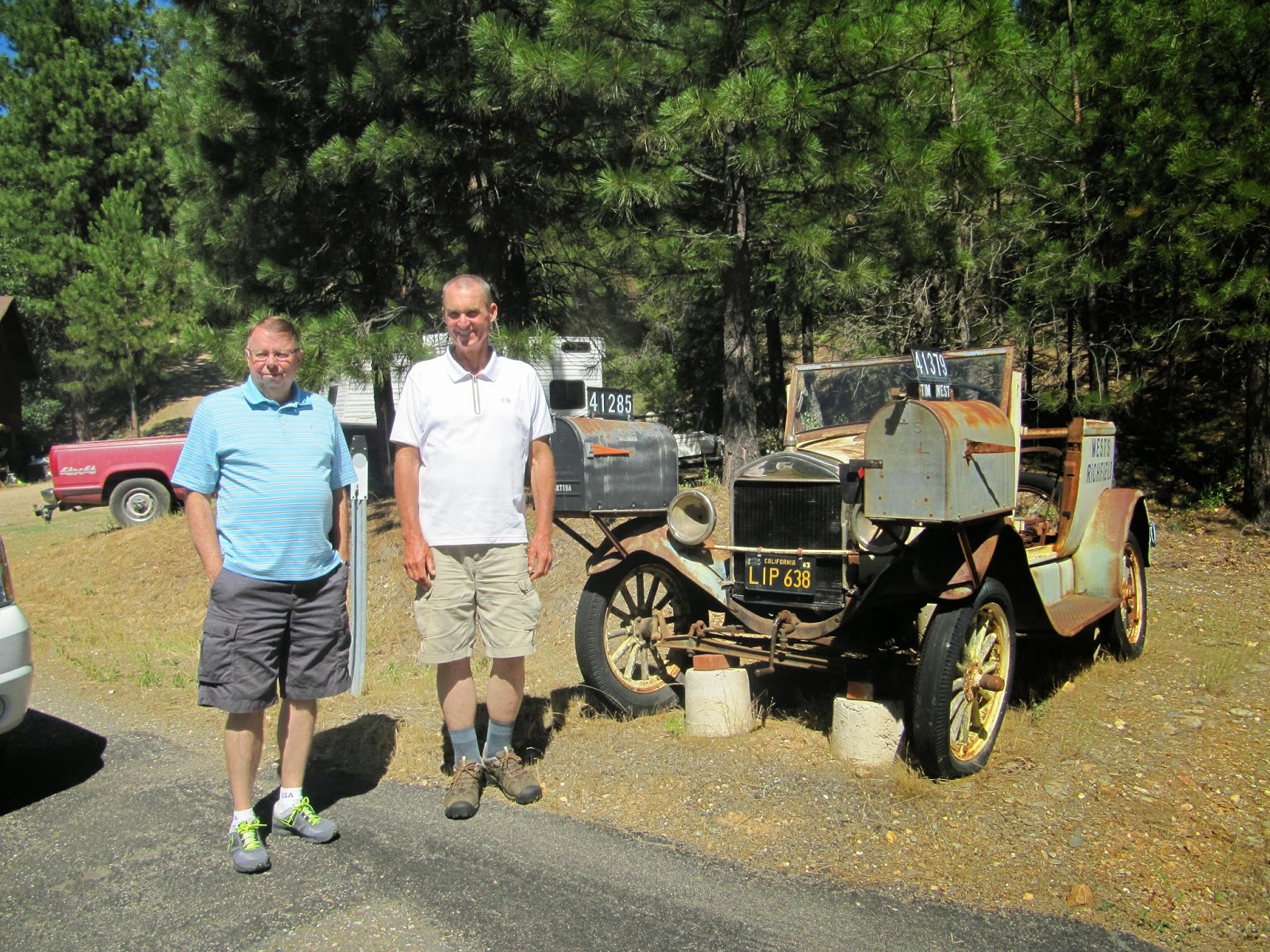 Driving between Sierra City and Belden, we found this vintage Model A Ford Phaeton being used as a stand for the mailbox. Definitely not the highest and best use of such an historical artifact.