“They’re mostly in their late teens or early twenties,” Rick answered.  “Some are high school dropouts, others are working during summer vacation from college, and some are just footless right now.  The corps is a good place for a guy to do some hard work, earn a little money, and sort out his thoughts and his objectives.”

“As for myself, I’m working for college credit.  This assignment is part of a director-leadership course for a bachelor’s degree in the field of parks and recreation.  It’s also great practical experience.” (Gray)

Past Gold Lake, the tread on the trail began to change from dry sand and pine needles to volcanic debris, and if the hiker was conscious of this change, he/she will begin to notice a sharp change in the geology of the land, as volcanic ash, fossilized mudflows, and volcanic breccia begin to dominate the landscape.

After climbing a few switchbacks, the trail approached the base of a steep, vertical cliff known as Gibraltar, which the Pacific Crest Trail guidebook identified as “layer upon layer of volcanic mudflows.”  A few miles farther on, I passed Stafford Mountain and Mount Etna, two volcanic plugs, thought to be the remnants of one large, massive volcano.

Plugs form when the lava chamber beneath a volcano begins to empty and can no longer sustain the volume of material being exploded out the top of the volcano.  The molten lava inside the throat of the volcano cools and hardens, forming a plug.  Because the plug was harder than the surrounding rock, over time, erosion would strip away the softer rock of the volcano, leaving only the plug.

Some of the most notable volcanic plugs that can be seen from a passenger vehicle are the plugs on the Navajo reservation, adjacent to Highway 163, between Monument Valley and Kayenta, Arizona.

After walking along the crest of numerous ridges, all exposed to the sun, and skirting around and sometime through logged areas called clear-cuts, the trail began a long descent to the Middle Fork of the Feather River.  The river was crossed via a massive arch bridge, the highest bridge on the Pacific Crest Trail.  The waters flowing beneath the bridge offered numerous swimming holes with slippery slides formed from water-polished slabs of smooth granite.

Working my way down to the edge of the river, I encountered several fly fishermen who had hiked many miles to get to this spot.  It was a beautiful location, and even if the fishing wasn’t good, just the hike into the river would be worth the effort.

I found Yashinka having lunch, so I joined him.  He said that Prophet left just a short time earlier. While preparing my lunch, I took the time to wash my feet and socks, and I was amazed at how thick the dust and grime can be after only a few hours’ walk.  The water felt good on the hot, dry skin, and I didn’t rush lunch, but like all good things, it came to an end, and I packed up and headed up the trail to the bridge.  Yashinka left before me and I wouldn’t see him for many more days.

Now began a long, hot climb up twenty-seven hundred feet of elevation that stretched over seven miles and culminated at a rock formation called Lookout Rock that offered wide, expansive views of the terrain ahead.  Much of the land that I could see from Lookout Rock had been logged, and may still be an active logging site, even though I saw no logging trucks.

The trail passed many such areas that showed the result of what these tracked vehicles do to the ground and surrounding terrain.  When I first saw what I considered to be damage to the landscape, I was indignant at the abuse the land and vegetation had to endure, but as I thought about it further, I realized that track vehicles act much the same way as a rototiller does in a garden; it churns up the ground, making it ready for planting, and although it looks horrible in the beginning, with time, the garden and the logged terrain will benefit from the soil disturbance.

I made my way across the tops of the mountains, following the trail that stayed on the ridgeline, until I reached a point where the trail began a gradual descent to the North Fork of the Feather River and the small community of Belden, almost four thousand feet below.  It was disheartening to have to make this four-thousand-foot descent to the river, because that meant that the following day, there would be a four-thousand-foot climb up the other side of the mountain
.
As I begin the descent, Commando came alongside of me; we stopped and chatted for a second about the climb out of the canyon.  From our vantage point, we could see the entire face of the mountain on the other side of the Feather River gorge and speculated where the trail might go.  Off to our left, we could see a trail that started at Highway 70, the major highway that ran through the gorge, and then through a long series of switchbacks walked straight up the side of the mountain.  We both felt it would be nice if that were the trail as we could complete at least half of the steep climb in one fell swoop, rather than stretching it out for miles. 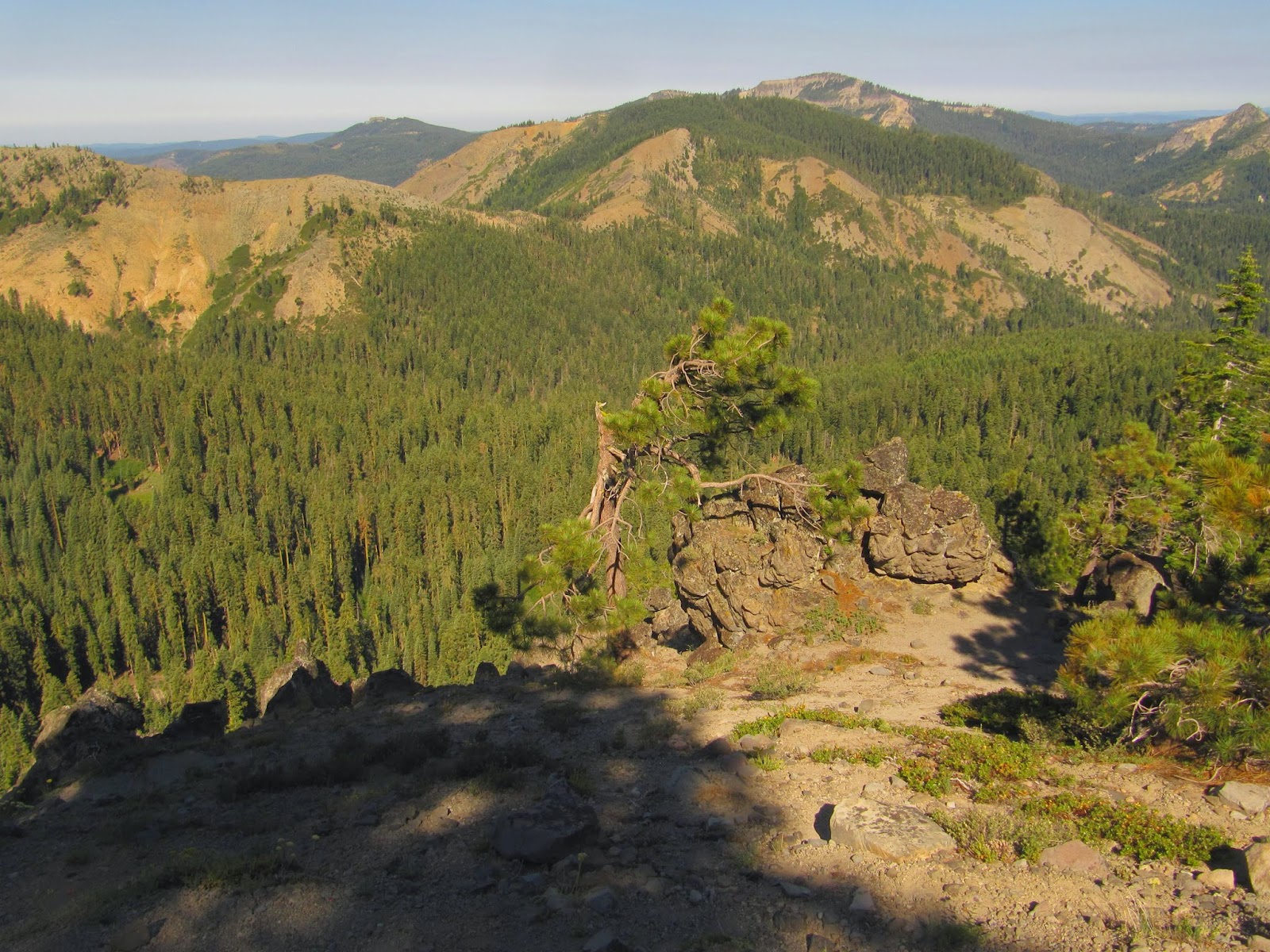 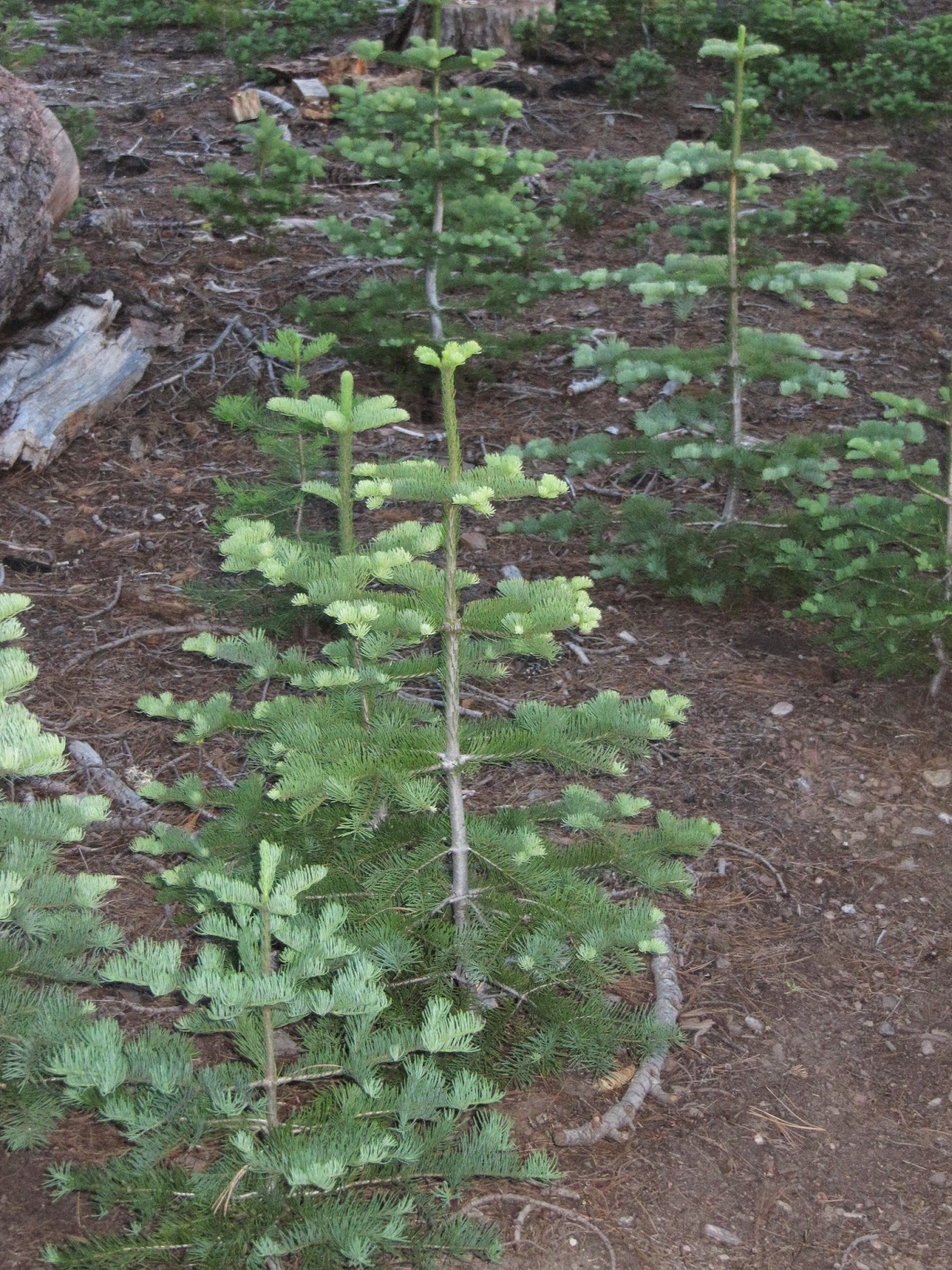 Along side the trail, I found a whole patch of perfectly formed Christmas trees. 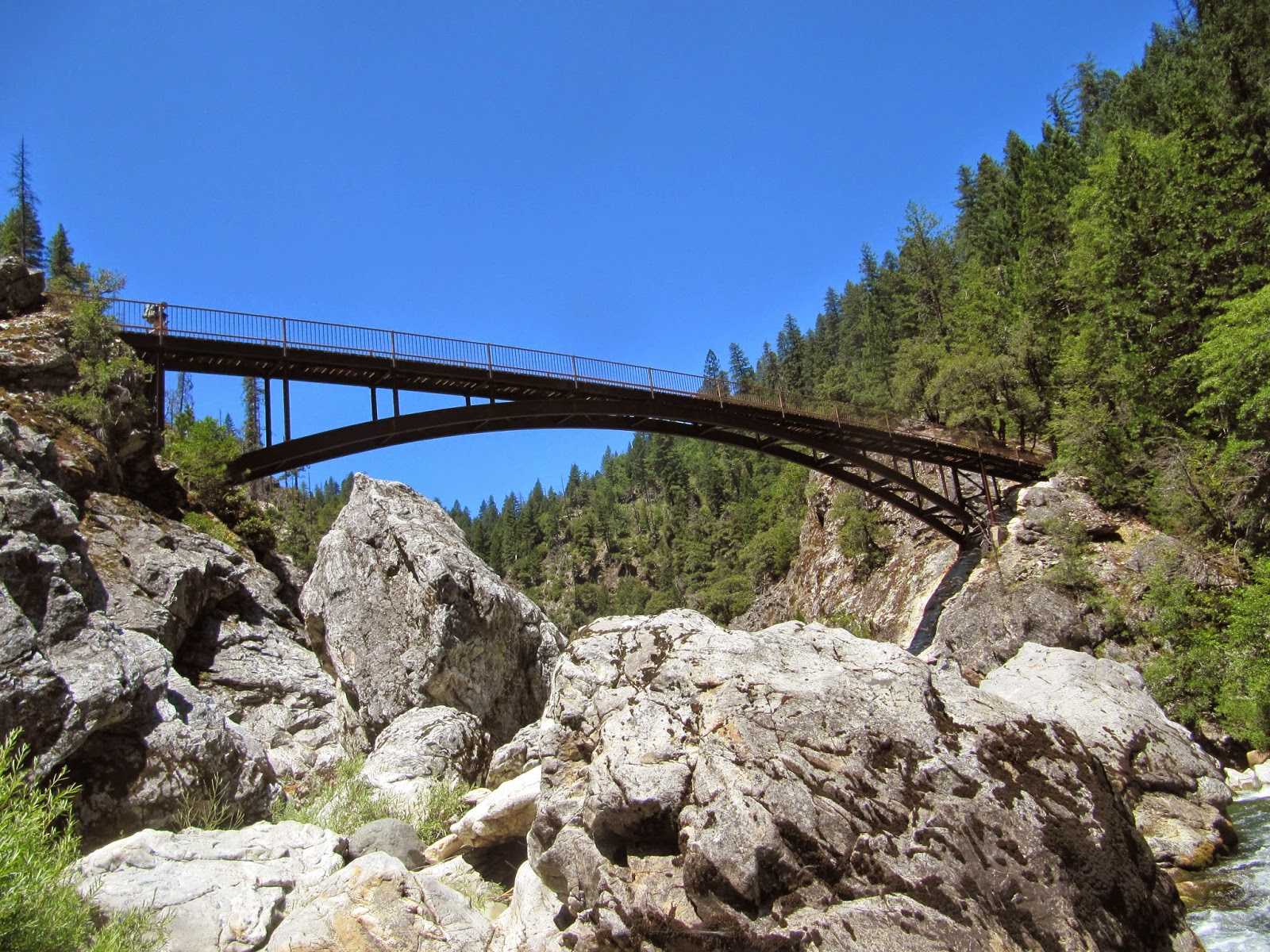 After a long descent, I came to the Feather River. This is the graceful bridge that spans the river gorge. 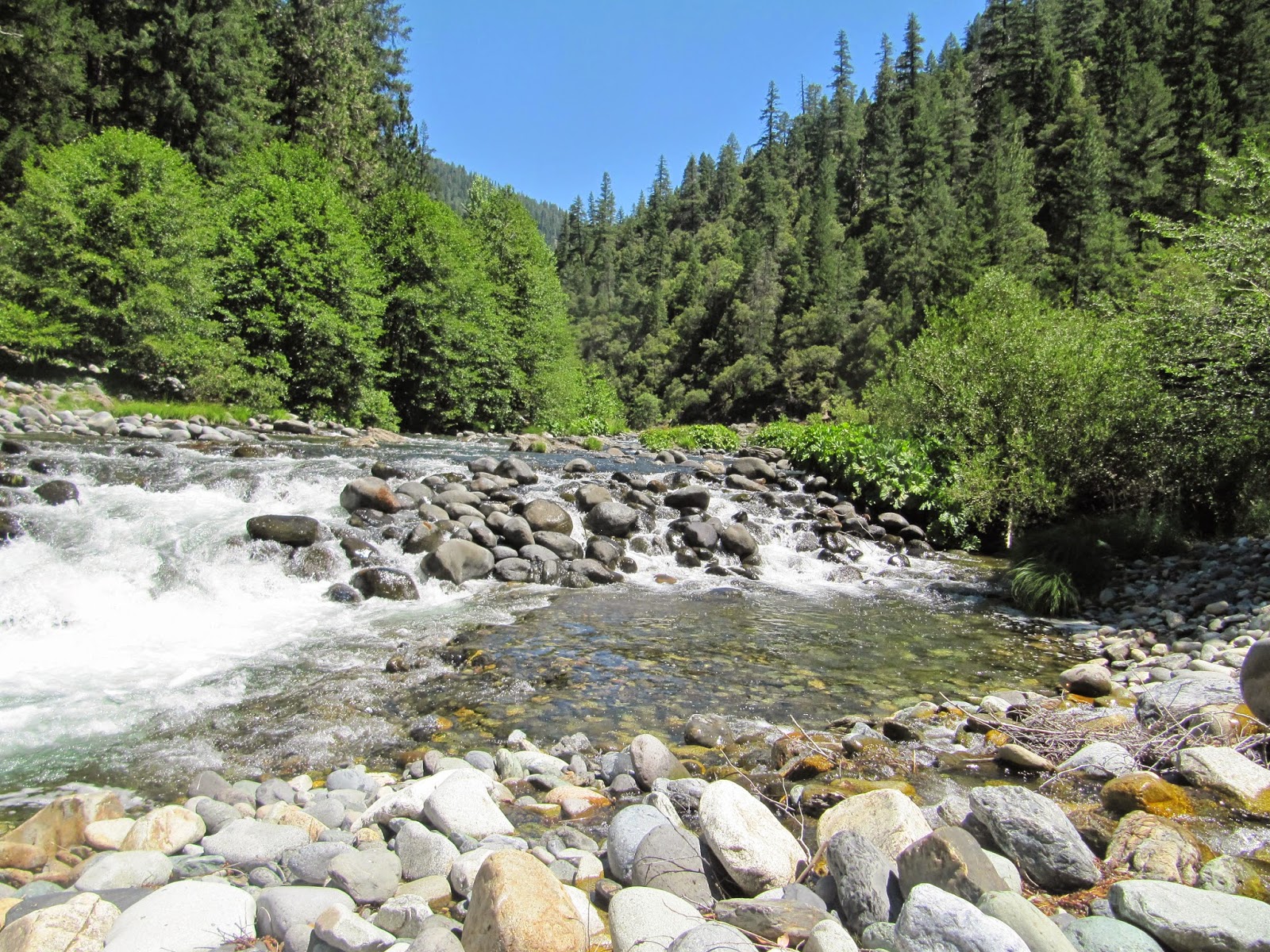 The Feather River looking upstream from my lunch spot. Somewhere in the picture is a fisherman. 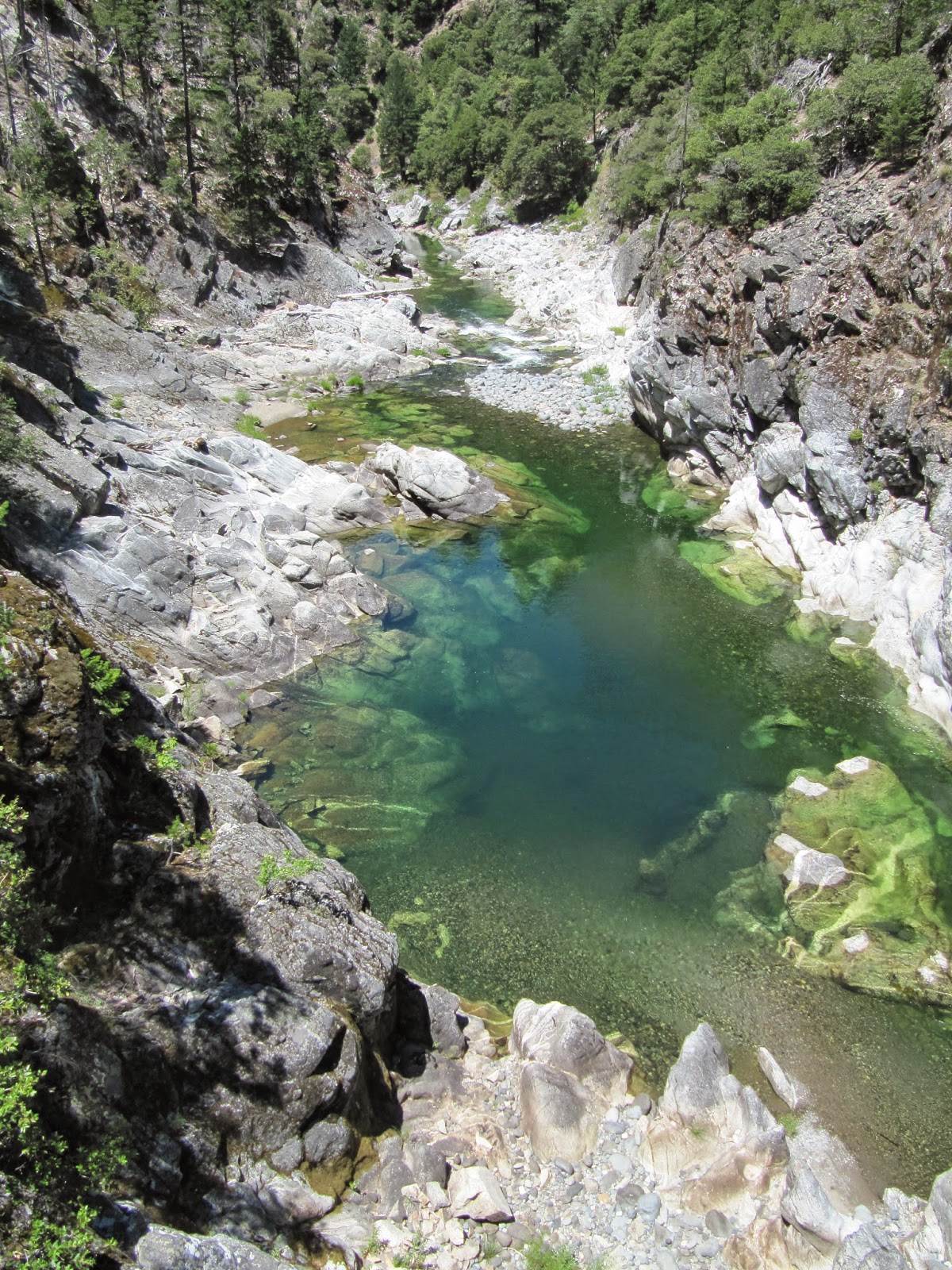 Looking down on the Feather River from the bridge. 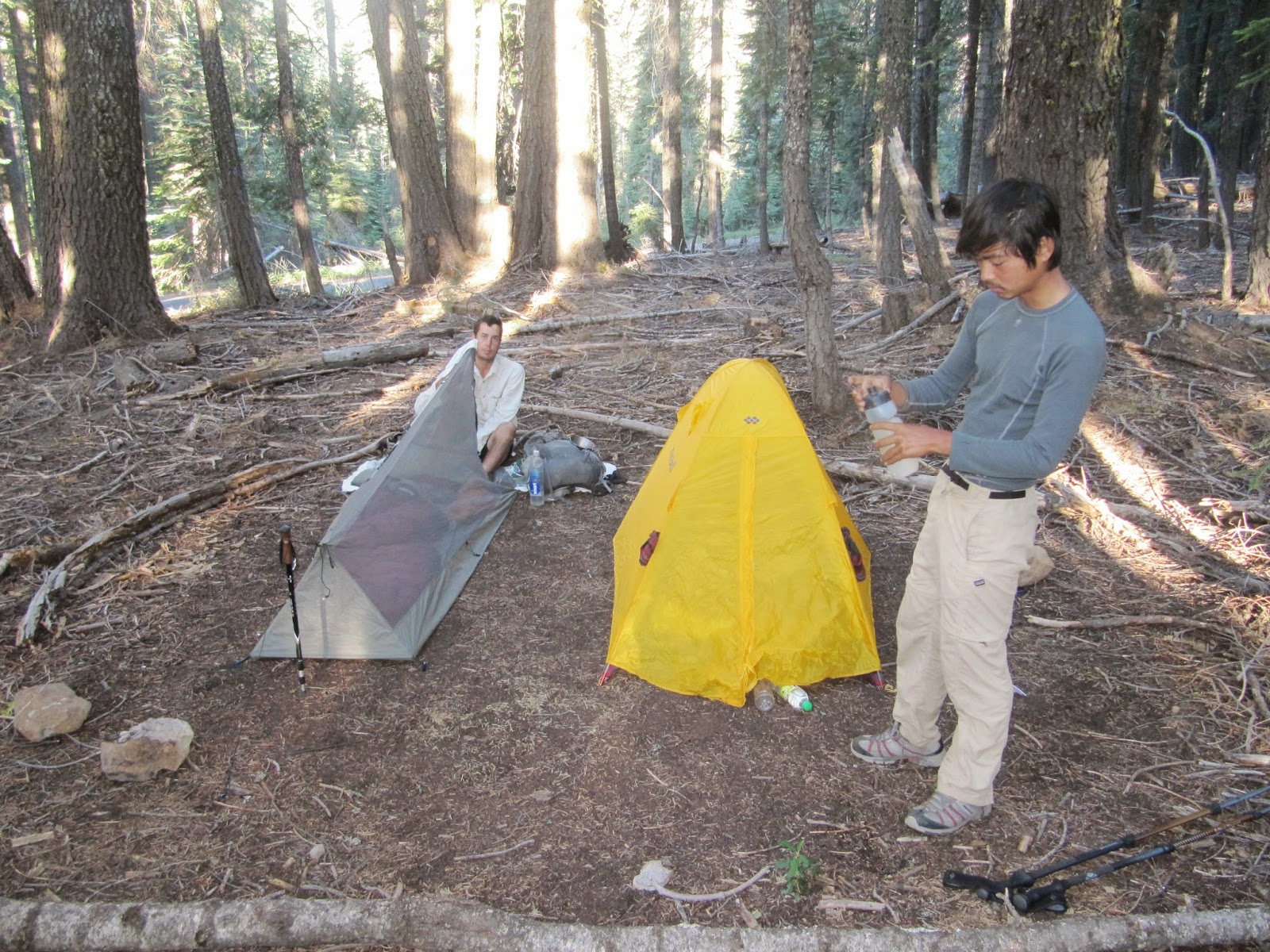 On the morning of the second day heading for Belden, I passed Prophet and Yashinka just settling in for the evening.
Posted by Richard Jones at Monday, June 10, 2013