It’s a fact of life on the trail; what goes up, has to go down.  By midmorning I was starting the descent off the rim.  The tread started out as a dusty Jeep road, then quickly dissolved to volcanic debris, then turned back to a dirt and dust trail.

On the horizon was water, and lots of it.  Crystal Lake and Baum Lake came into view and together they formed the Crystal Lake Hatchery.  Drinking water was available at the hatchery, but not needing any, I passed on by.  My goal for the day was to get into the town of Burney Falls where I had a resupply package waiting for me, including a new pair of Keen Voyageur shoes.

The Keen shoes I’ve been wearing I received from my wife at Donner Summit; they only have 250 miles on the tread, but the soles were separating from the uppers, and I couldn’t chance putting more miles on them before replacing them.  Fortunately, REI has an excellent return policy, and on my return home I’ll take the malfunctioning shoes back to them for a full refund.

I arrived at Highway 299, the road leading to Burney Falls, at noon.  I crossed the highway and stepped back into the woods, where I proceed to clean up a bit; I took a sponge bath, brush my teeth, and put on some deodorant, then stepped back out onto the pavement to solicit a ride into town.

In three and a half minutes flat, I had a ride.  Coming up the hill, on the opposite side of the highway, I watched an SUV pass me, slow down, flip a U-turn and pull alongside of me.  Inside the car was a mother with two little girls in the back seat.  After all this time on the trail, I still find it incredibly hard to understand why a female, and this time one with two small children, would intentionally interrupt her schedule, as well as alter her direction of travel to purposely turn her car around, pull up in front of me and offer me, a total stranger, a ride into town eight miles away.  I could see a crusty old construction worker with a beat-up pickup doing such, but a mother with two small kids… I have to admit, I said a prayer before going out on to the highway to hitch a ride, and like so many times before, my prayer was immediately answered.  Coincidence?  probably not.

Seated in the car beside the two small girls heading into town, I asked the driver the same question I’d asked so many other female drivers - why she interrupted her direction of travel, flipped a U-turn, and drove over to where I’m standing to offer me a ride, and her answer was the same as the others; she said she just felt impressed to do so.

She said she was a nurse who worked in another town, and was headed to work when she saw me standing there.  From my pack and trekking poles, she said she knew I was a PCT hiker, and that it was okay for her to offer me a ride. The awesomeness of charity and gratitude is what the trail is teaching me.

My host/driver stopped in front of the post office and let me out.  I thanked her for her graciousness, and said “Good-bye” to her and the two small children, then walked over to the post office.  My package hadn’t arrived yet; it was still at the post office in Redding, but the postmaster assured me it would be at his place in the morning, and he would see that it was put on a special-delivery truck headed to the post office at Burney Falls State Park.

“It will be there by ten o’clock in the morning,” he assured me.

I walked next door to the Subway shop, bought and consumed a foot-long sandwich and drink, then wandered on down to the Safeway store to see what other delights would entice money out of my wallet.  On the sidewalk in front of the store, I found, Pia, Cowgirl, Charlie, and Sherpa C eating lunch and packing supplies into their packs, as well as recharging cell phones.  These kids were eating green salads with avocados, tomatoes, cucumbers, etc., --  healthy stuff, which is what I probably should have been eating, but when I came out of the store, I had a half-gallon of milk, two packages of cookies, and a pint of Ben and Jerry’s Ice Cream.  To each his own.

In a garbage can next to the ice machine, I found a large piece of cardboard and made a sign that said "Pacific Crest Trail – Just 8 Miles, Please," then back out onto the highway I went. Within ten minutes, I had two drivers vying to give me a ride.  Just as the first truck stopped, another vehicle with a middle-aged couple in it stopped in the opposite lane to offer me a ride; I said, “Thanks,” but indicated that I would go with the pickup truck that had just stopped 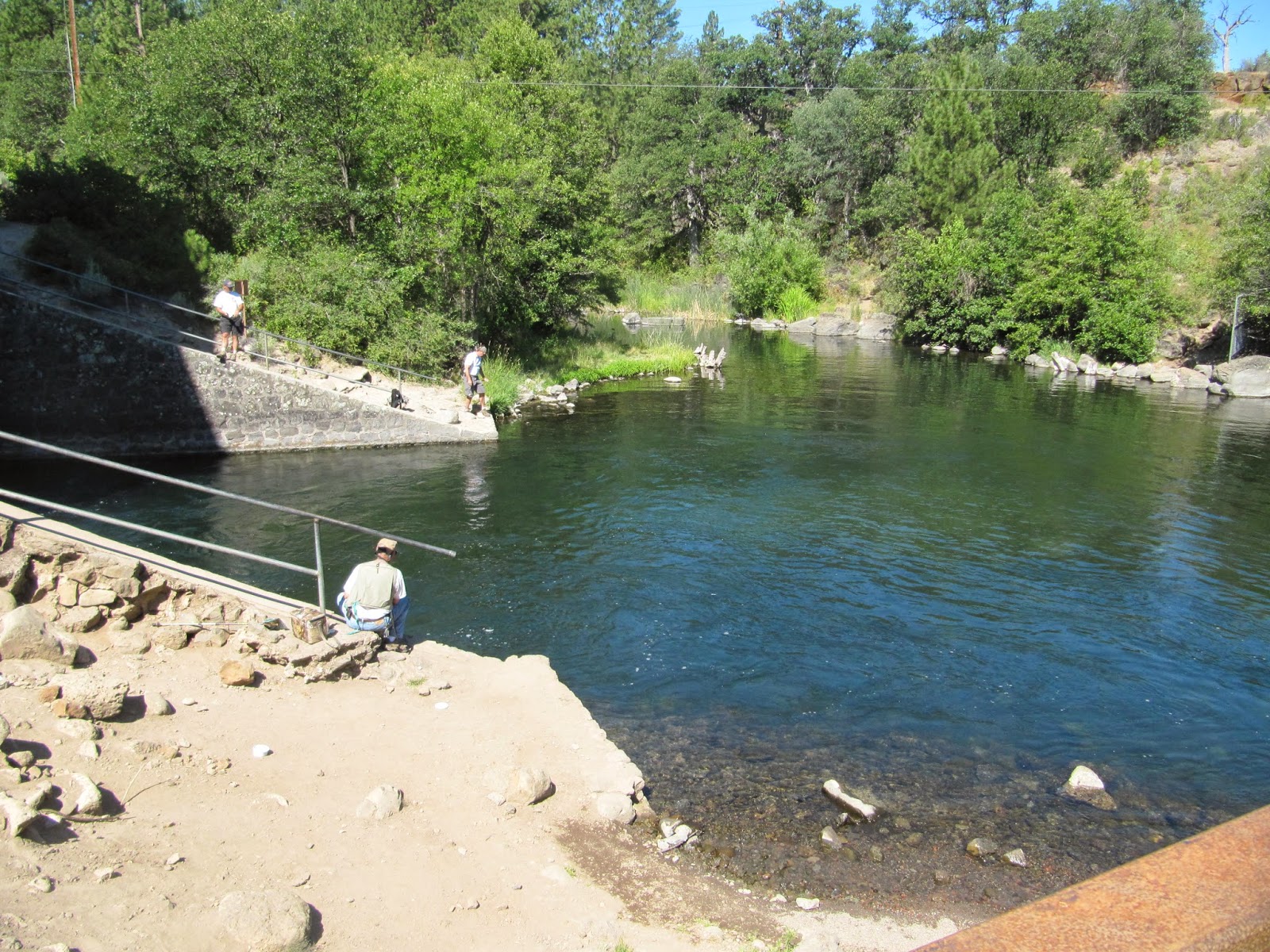 Water for the Crystal Lake Hatchery. 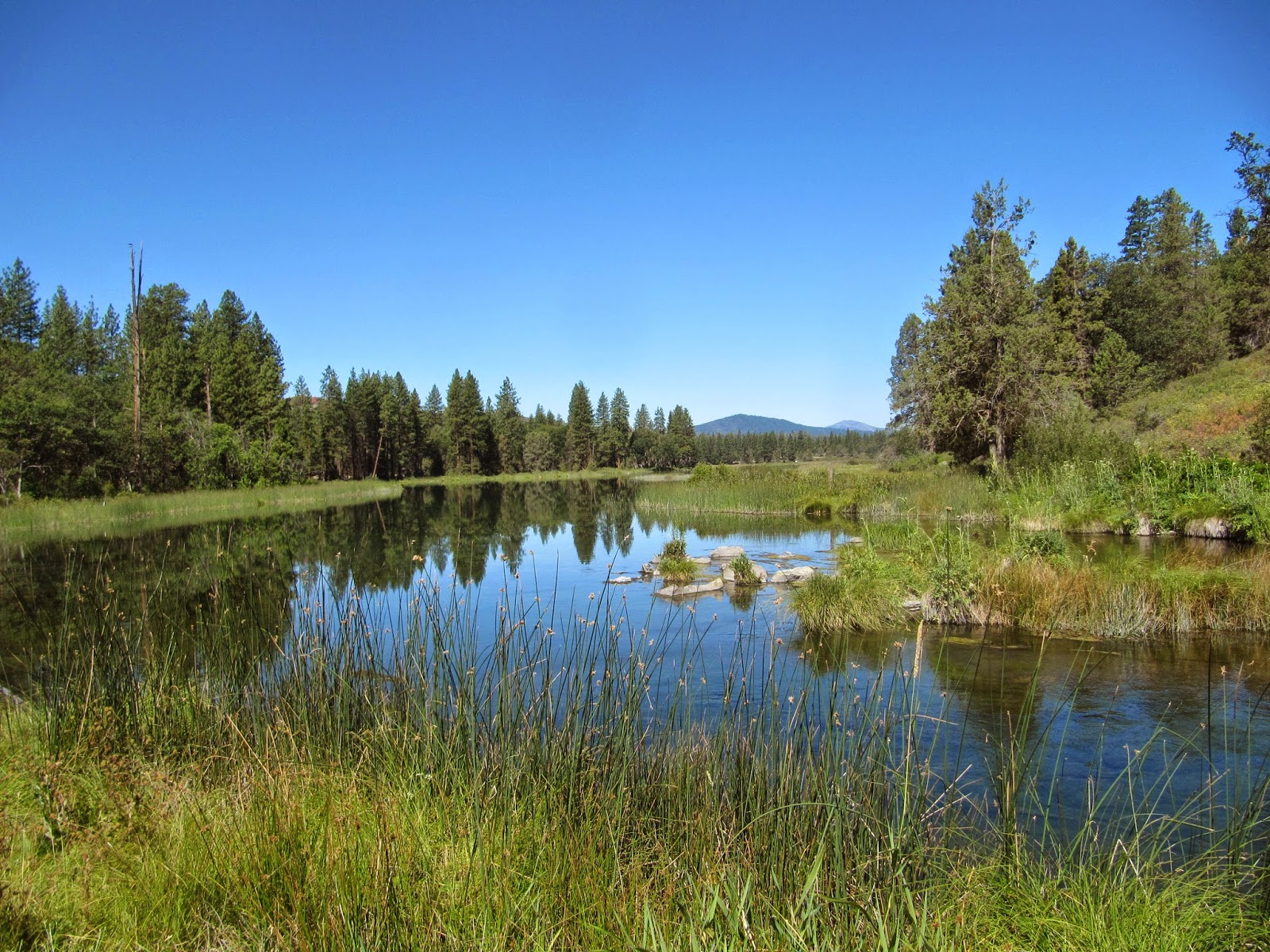 Baum Lake and Crystal Lake seem to be interconnected. The primary water source for these lakes are springs that gush forth thousands of gallons of water a day. 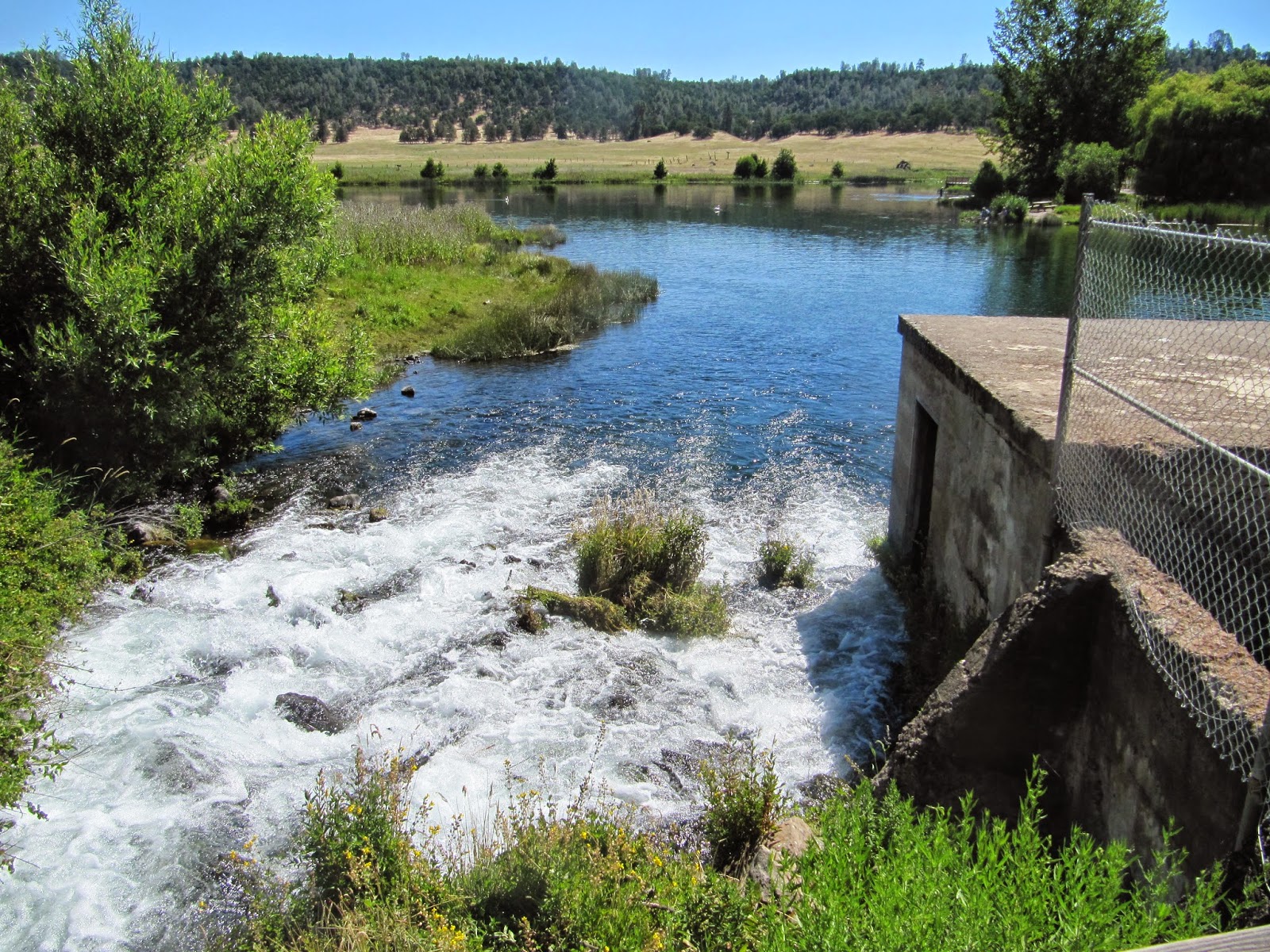 Water from the lakes moving on down the river towards Burney Falls. 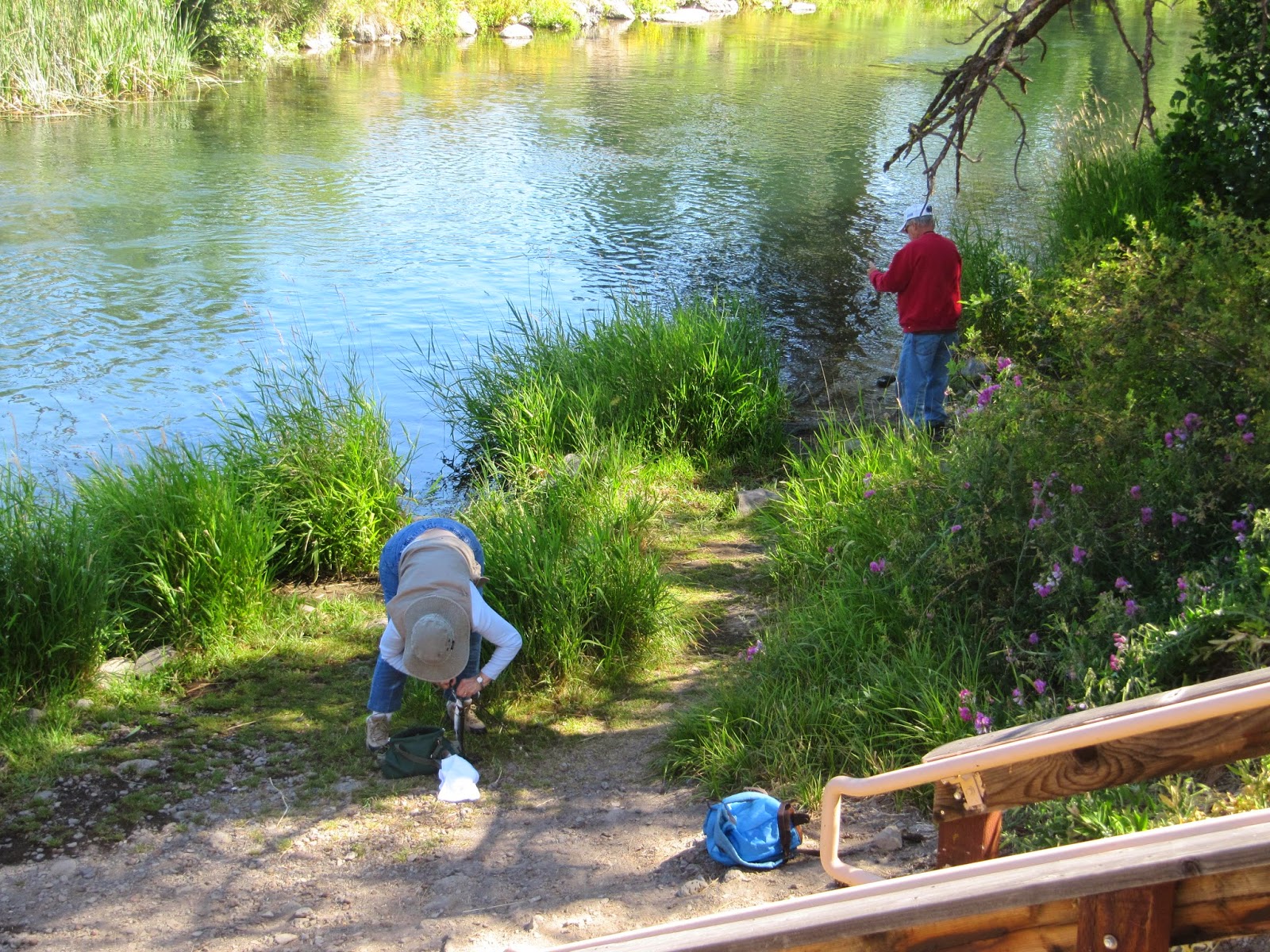 Crystal Lake Hatchery is obviously a great place to fish. 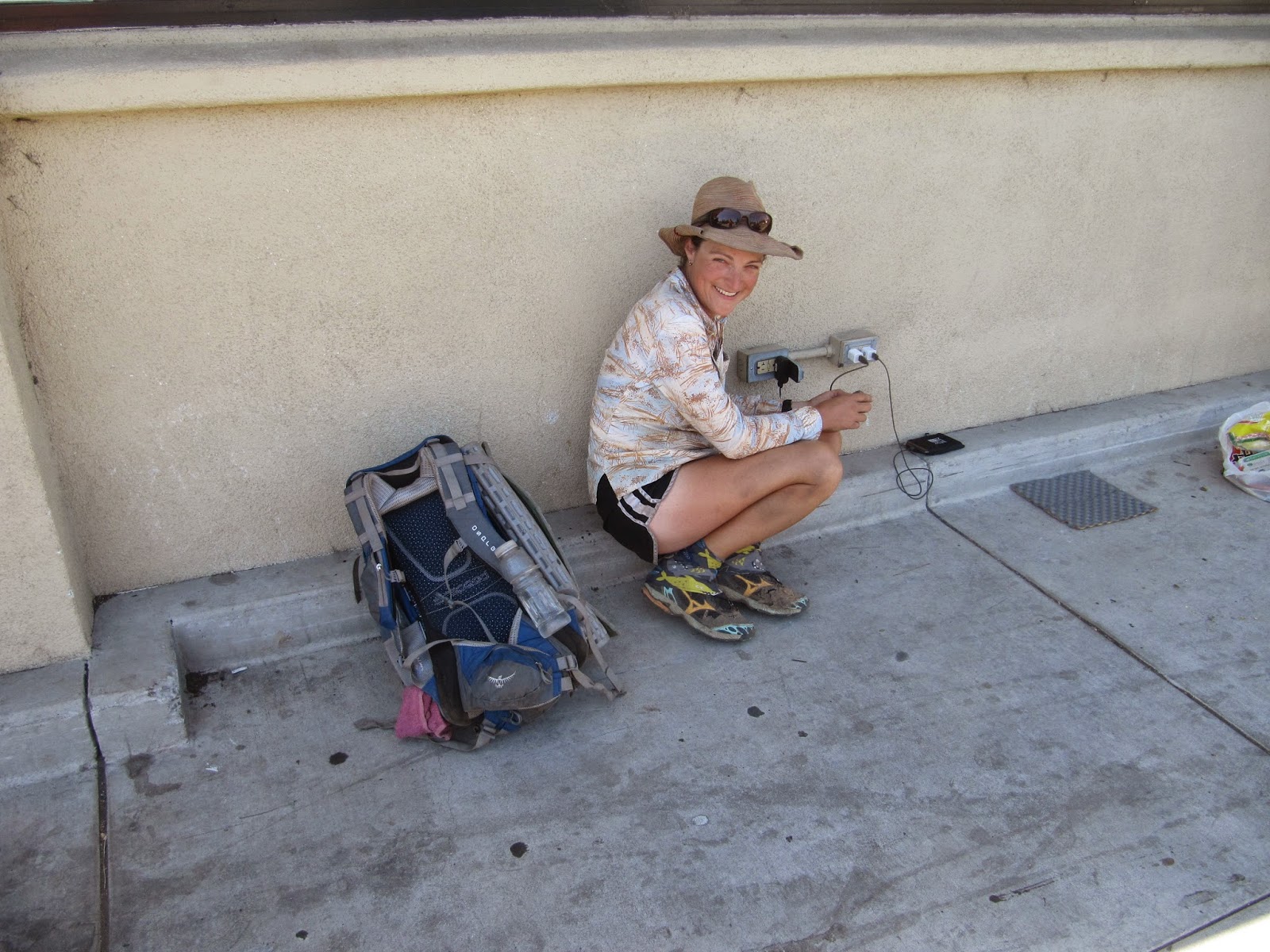 At the Safeway store in Burney Falls, I found Clair recharging her phone. 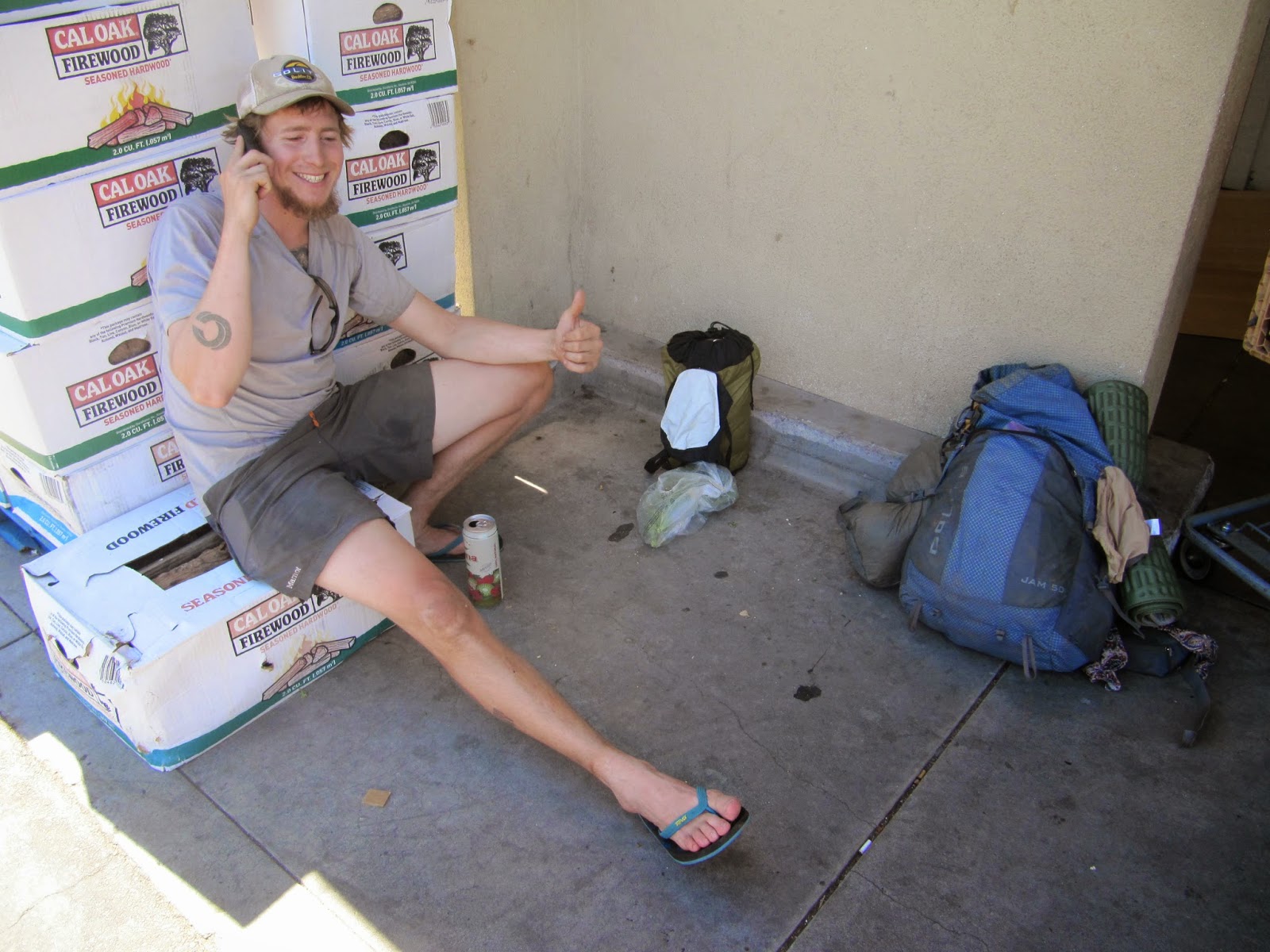 Sherpa C was also at the Safeway store. 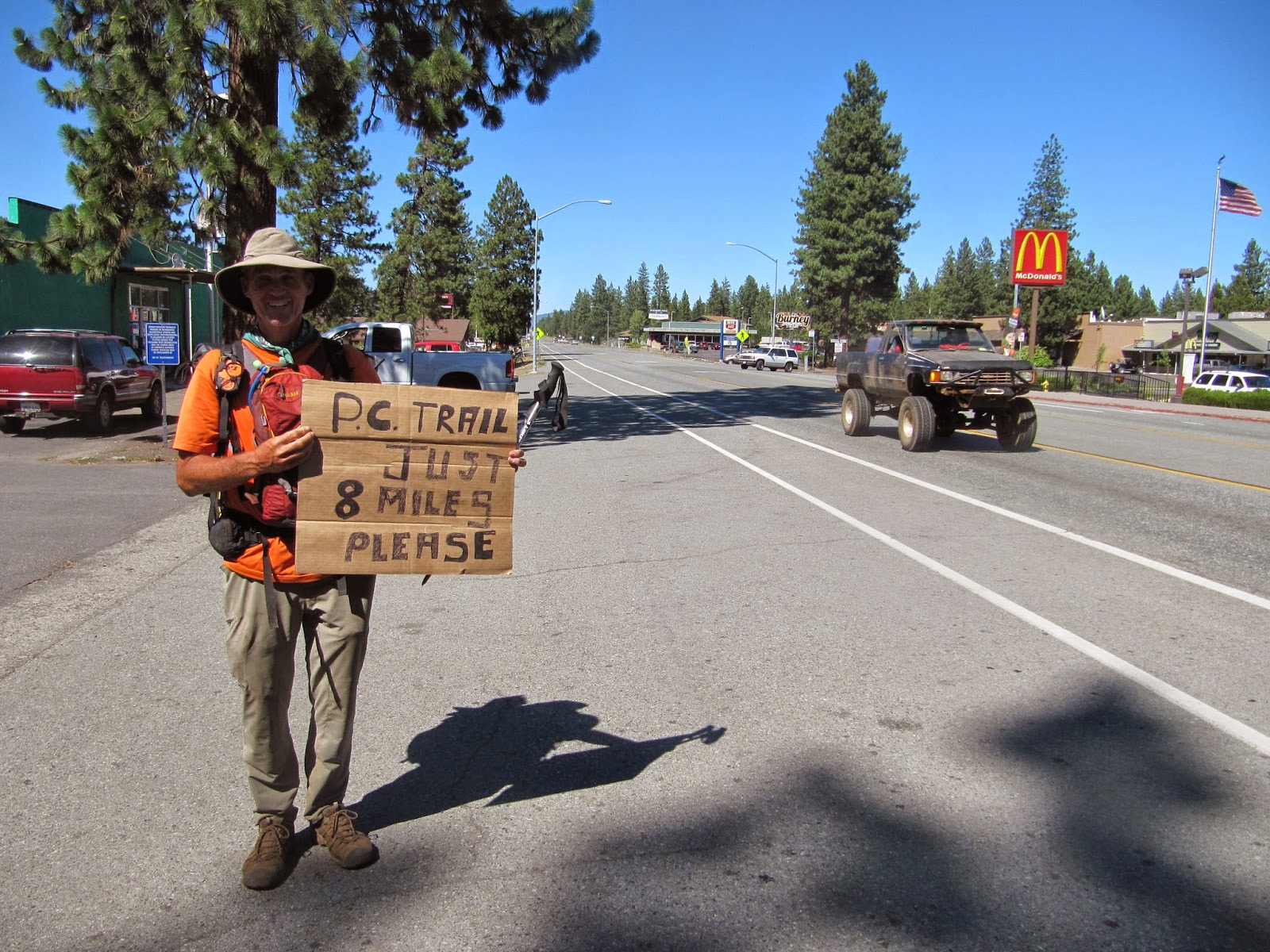 Now that I've finished my business in Burney Falls, it's time to get back on the trail.