After the trails were reconnected, it passed close by a small resort town called Old Station, just before ascending the volcanic ridge leading to Hat Creek Rim.  There was a post office in Old Station, and many hikers would leave the trail and walk the short distance to the resort, which fronts onto Highway 89 leading north to Burney Falls, California.

I had no resupply package waiting for me in Old Station, but it was common knowledge on the trail that the small restaurant in the convenience store had great tacos and chocolate shakes, and just the thought of those two items was like a powerful magnet that drew hikers off the trail, just as turkey vultures are drawn to road kill.  (It may not be a good analogy, but you get the point.)  I turned off the trail and walked past several campsites that were filled with pickup trucks and horse trailers.  It looked like there was going to be a trail ride tomorrow
.
The convenience store/restaurant was on the verge of closing for the evening, but I slipped in and quickly placed my order for tacos and chocolate shake, then sat at a table with Forget-me-not and E-Path and passed the time in pleasant conversation.  Forget-me-not said her trail name was in remembrance of her mother who passed away recently.

She said she and her husband were staying the night in the motel, and offered to let me take a shower in their room.  I thanked her, but told her I would take a rain check on the offer.  There was only one counter helper taking and making orders, and by the time my order was ready, the store was ready to close, so I took my precious goodies to the picnic table in front of the store and ate them there. While I was eating, I recharged my cell phone battery at an outlet on the wall of the building.

The Pie was Atrocious, but the Café Still Rated High on My List

On the portion of the bike across America ride that traveled through the states of Colorado, Kansas, and part of Missouri, a distance of about a thousand miles, I invited my sixteen-year-old-son, Scott, to join with me.  He, too, was riding an eighteen-gear, Specialized Rock Hopper Mountain Bike, so we were both slow.

The first town just beyond the Kansas-Missouri border was called Golden City.  My son and I spent the night on the outskirts of town, and in the morning peddled into the city in anticipation of getting something to eat at any café that might be open.  The first place we came to was called Cooky’s Café.  We arrived a few minutes before they were to open, so we parked our bikes against the side of the building and sat on the street curb to wait.

Somehow, somewhere, Scott cut his index finger; nothing serious, but it was bleeding. While we’re sitting on the curb, with Scott holding his finger, a lady came out of the front door of the café and approached us.  I was struck by her beauty and the finery of her clothing and around her neck was a gorgeous string of white pearls.  She looked to be Vietnamese.  She came to let us know that the café was now open, but upon seeing the blood on Scott’s finger, she offered to get him a Band-Aid.  With his finger bandaged, we were escorted into the café and took seats at a table.

I took the woman to be the owner of the café, as opposed to being hired help.  She had grace and dignity, and with the elegant way she was dressed, including the string of pearls, I just didn’t see her as an hourly wage waitress depending upon tips to make ends meet.  She brought us our menus, and after placing our orders she informed us that it was her, or the café’s policy, to offer a free piece of pie to the bicyclists who stopped to eat.  Both Scott and I were elated at the offer.  That’s what called, in the business world, adding value to the base cost of the product.

With the meal finished, the kindly woman came to take our order for the pie; Scott chose chocolate and I opted for banana cream.  She left and quickly returned with our choices.

I am a big fan of pie in any flavor, and when traveling, will go out of my way to sample the local variety.  Over the years, I have had some great pies, and some really nasty tasting ones. After taking one bite of the delicious-looking dessert placed before me, I have to say, in all honesty, and Scott agreed with me, the pies, were the absolute, worst pies we had ever tasted.  They must have been made with Vietnamese ingredients.

We sampled each other’s pie and concluded they were both unappetizing, but out of consideration for the graciousness of our hostess we ate them anyway, as we didn’t want to offend our hostess or fault her for her generosity.

Back on the road, we continued riding until almost noon, when we saw a bicyclist approaching from the opposite direction.  Just like PCT hikers who often stop to chat when meeting other hikers on the trail, we stopped right in the middle of the road to visit with our new acquaintance.  We both shared stories about what to expect going in opposite directions.

The solo rider told us to be sure and stop at a café called the Old Hat, for the owners loved the cross-country bicyclists and had a special on lemonade.  The first mug, he said, was fifty cents, and all refills thereafter were free.  In like manner, we told the solo cyclist that by all means, he had to stop at Cooky’s Café and have a meal there.

We didn’t tell him about the pie; we felt it best that he experience it on his own; likewise, we didn’t want to prejudice him against not eating at the café.

As Scott and I continued riding east, we were attentive in proclaiming to westbound cyclists the qualities of the Old Hat Café and Cooky’s Café.  From us, these two establishments received the best advertising one could ask for – word-of-mouth; unsolicited product endorsement, a positive review, and all because of the no-cost value each owner added to their base product.  People love it when they think they’re getting something free or value they didn’t expect.  There’s a great lesson to be learned here - you can’t put a price on word-of-mouth-advertising. 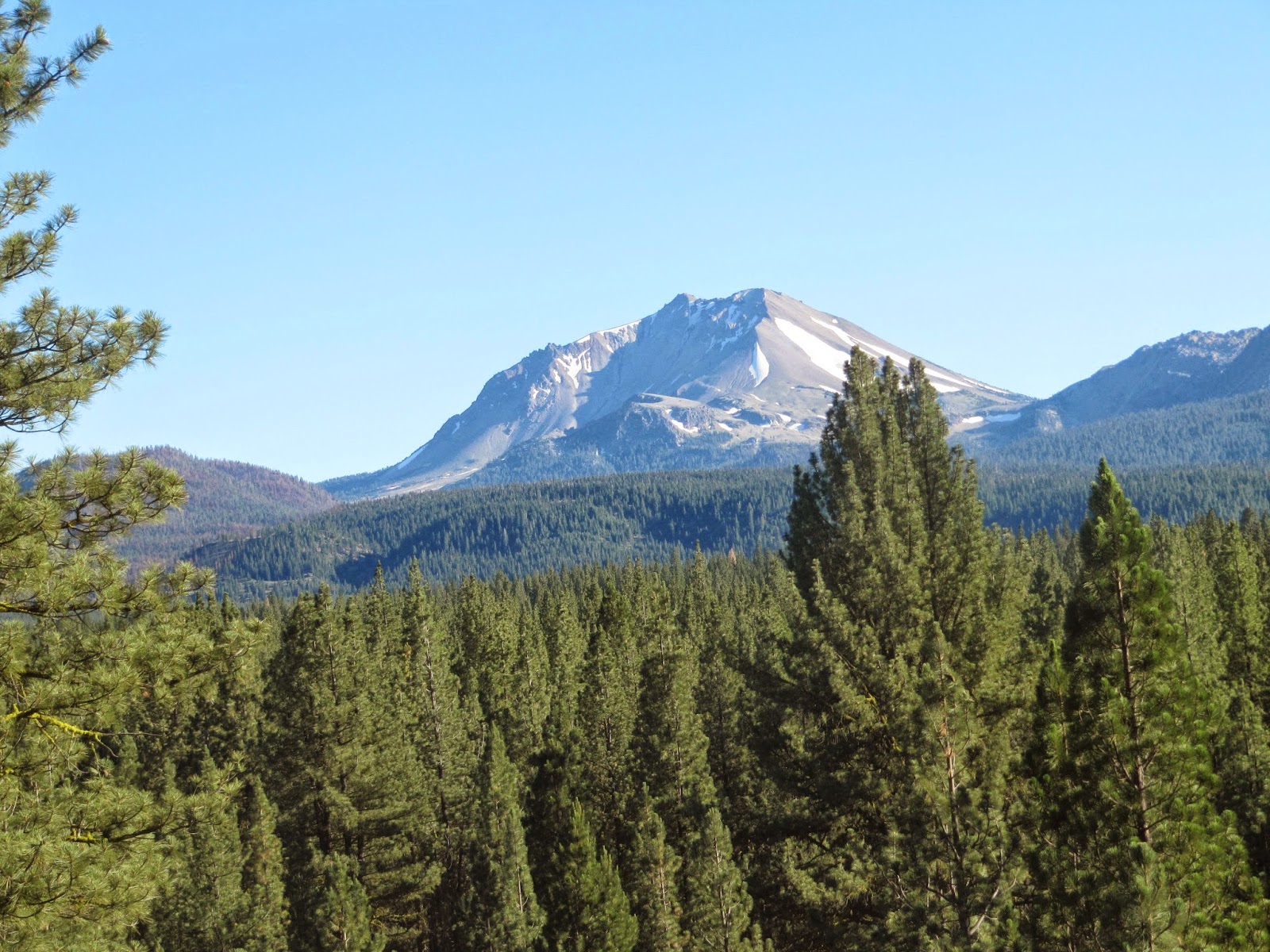 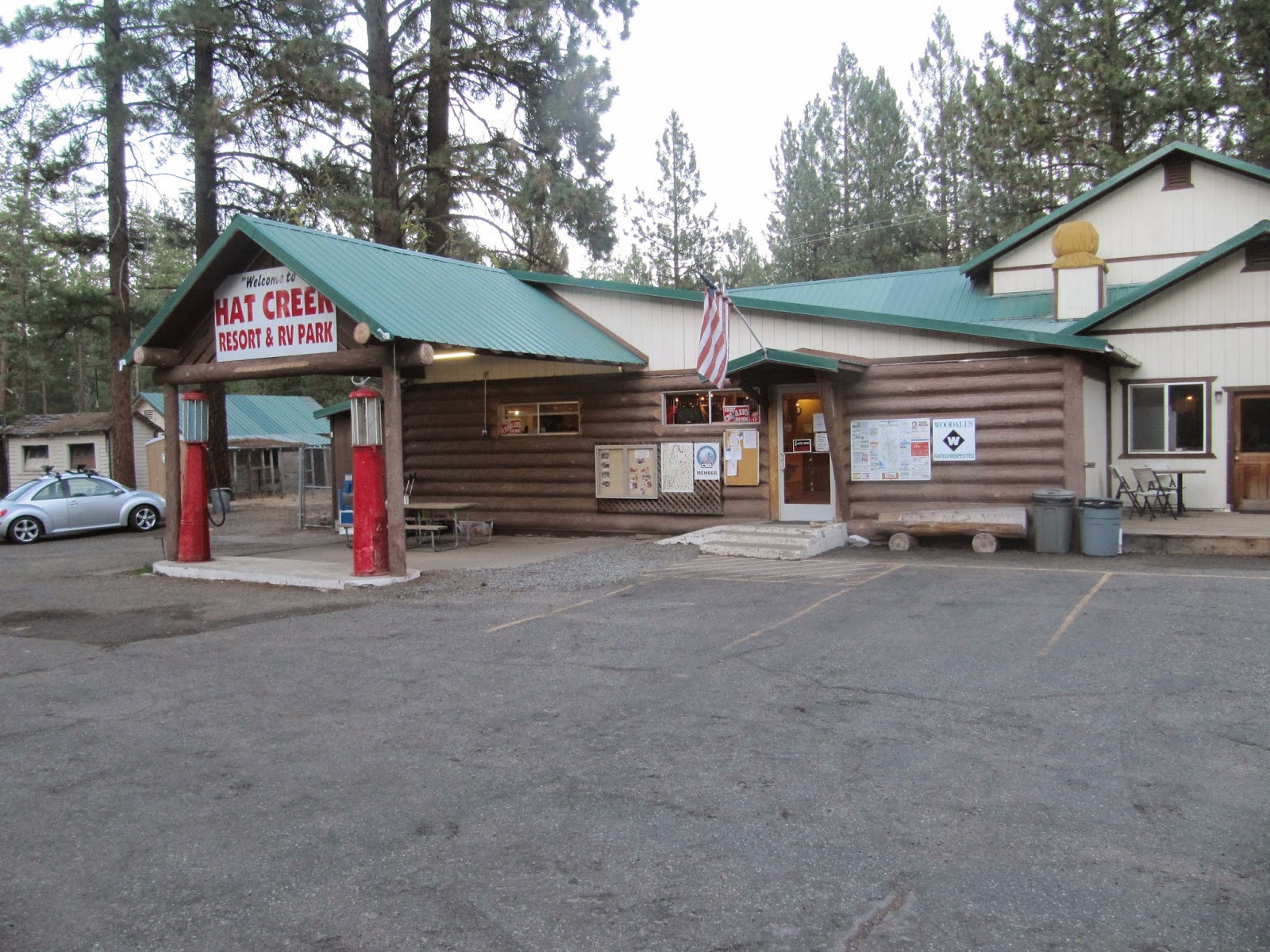 The resort office at Old Station. The gas pumps in front are just for show. The cafe and store are inside the building, and adjacent to this structure is the post office where hikers can receive resupply packages. 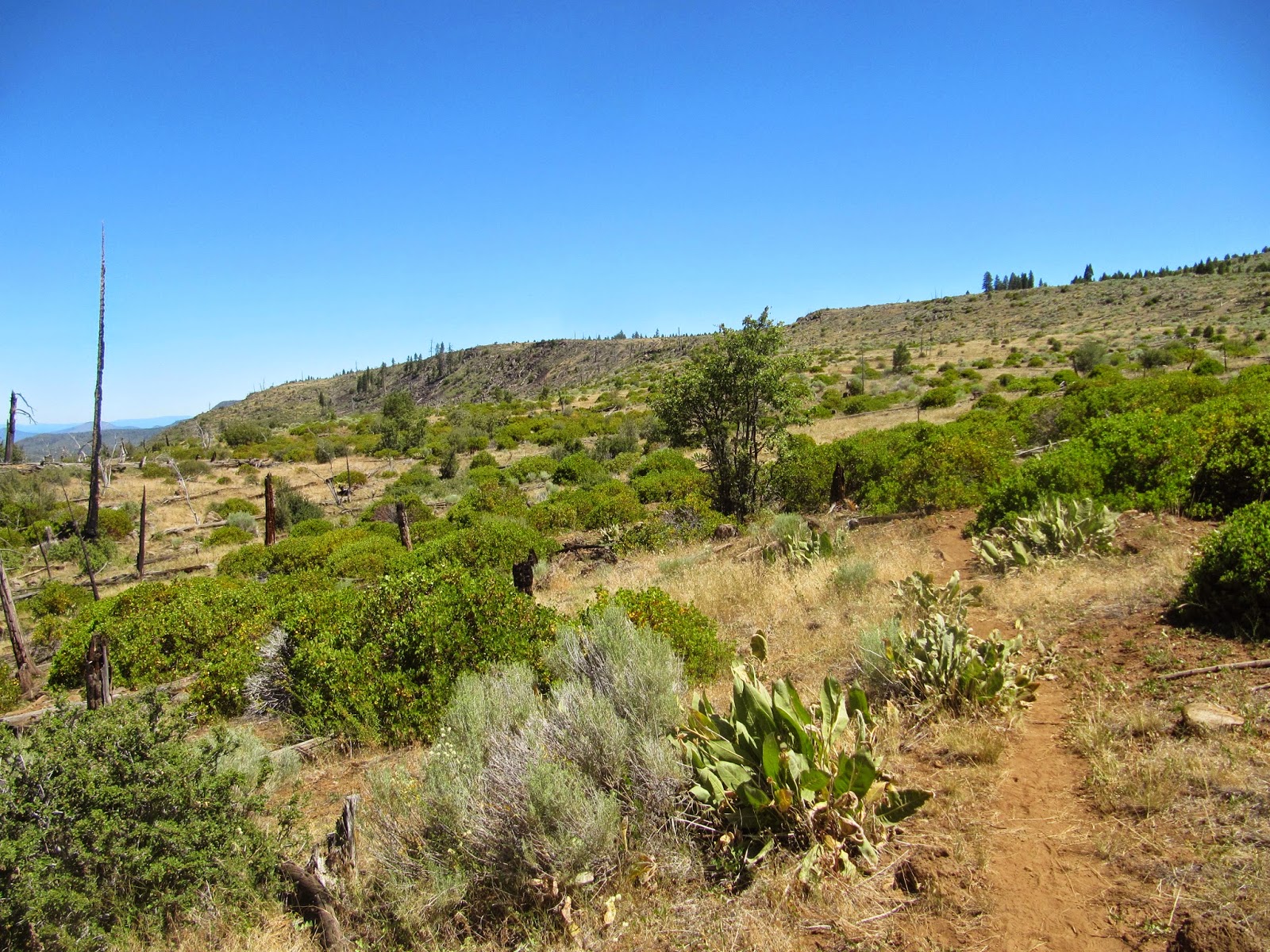