“Between 1914 and 1917, Lassen Peak growled and grumbled, spewed steam and lava, and produced earth tremors, mudflows, and billowing clouds of cinders.  The most frightening eruption occurred on May 22, 1915, when a massive explosion rocked the region, created a mushroom-shaped cloud of steam and ashes that rose to thirty thousand feet, and sent an avalanche of lava surging down Lassen’s northeast slope.” (Gray)

From the PCT halfway marker, it was less than ten miles to Highway 36, and the opportunity to hitch into the small town of Chester.  I had a strong desire to get to Chester before the town rolled up for the night, but I was still five hours away from the highway; however, with a drop of  twenty-three-hundred-foot drop in elevation, it was all downhill, so I put the “pedal to the metal,” and moved as fast as I could down the trail.

A couple of miles before crossing the highway, I passed a small stream with the only campsite available along this section of the trail; a number of hikers had stopped here for the night – Pia, Cowgirl, Charlie, and Sherpa C, plus a couple of hikers I didn’t recognize.  I was tempted to stay for the night and forget about going into Chester, as it was getting dark; but there really was no room, so I pushed on.

At 8:00 p.m., I stepped onto the pavement of Highway 36; there was still daylight, and I stood a reasonable chance of getting a hitch into town; however, across the road, back in the trees, were several parked cars.  I had a suspicion it might be trail magic, which meant food.  I crossed the road to investigate, and discovered that there were trail angels present and immediately the vortex of trail magic sucked me in, and I forgot about hitchhiking into Chester.

Dinner this evening was being hosted by trail angels Gourmet and Sourdough.  The half-dozen hikers lounging around the campfire had all had dinner, but the fixings were still displayed on the tables.  Sourdough asked me if I’d like a hot dog or a hamburger, and I said, “Both please.”  While I waited for the items to be cooked, I listened to the conversation being exchanged between the hikers.

From Gourmet, I learned that he had hiked the trail last year, and was only four miles from the Canadian border when he slipped on ice on the trail and broke his ankle.   Unable to continue, he had to be evacuated by helicopter to the nearest care facility.  He said he would finish the trail this year.  During the evening, I downed five sodas.  I don’t know why they taste so good out here on the trail, but they sure hit the spot.

The conversation turned to taking days (zeros) off the trail.  I told the group that with the exception of the two days I spent with Jodie at Truckee, I hadn’t taken any days off.  Sourdough tried to convince me that given the mileage left to Canada, and hiking eighteen to nineteen miles a day, I could afford to take up to ten zeros and still make it to the border by the end of September.  In one ear was the little voice that said,

“Take the zeros, you’ve pushed hard these many weeks; you deserve to relax more.”
In the other ear was the voice of Virginia Reed, who cautioned,

“Never take no short cuts and hurry along as fast as you can.” (Stewart)

In hindsight, I was mighty thankful I didn’t listen to Sourdough.

Before night was fully upon me, I went a few yards into the forest to set up my camp.  No need for a tent tonight; it wasn’t going to rain and there were no mosquitoes, but there were those pesky, three-quarter-inch-long black ants.  Most go to bed when it gets dark, but there are a few who didn’t believe in a curfew, and they paid the price.

As I lay on my cushy air mattress with my GoLite down quilt wrapped snuggly around me, I took the time to ponder.  I have a long laundry list of things I could think about, as well as a long list of things I don’t have to contemplate or wonder about.  I know that many hikers come to the trail to take a break from their schooling, or to take a well-earned sabbatical before going back into the real world to look for employment.

A few come to sort out the details of their lives, to try and find purpose for their existence, to try and make sense of all that has happened to them; others come to raise awareness for their “cause,” or money for a particular charity they’ve devoted time and energy to.

None of this applied to me; I was here for the sheer exuberance of the adventure.  It was strictly a personal challenge for me – could I do it, especially now that I’m a senior.

I know who I am; I know what my purpose in life is.  I know why I’m privileged to have this mortal experience; I have a basic understanding of my long pre-existence before entering mortality, of the knowledge, wisdom, and talents I acquired before earth life; and I have a simple understanding of the processes and conditions that will exist following the expiration date of my mortal body.

Being retired, I no longer have to seek employment; my family is raised and I can now spoil my grandchildren, and then give them back to their parents.  I have not abused my body with drugs, alcohol, and tobacco; in fact, I’ve never tasted a beer, so in my senior years, I’m not facing health issues related to substance abuse, although I have to admit I have a strong penchant for chocolate and banana cream pies. 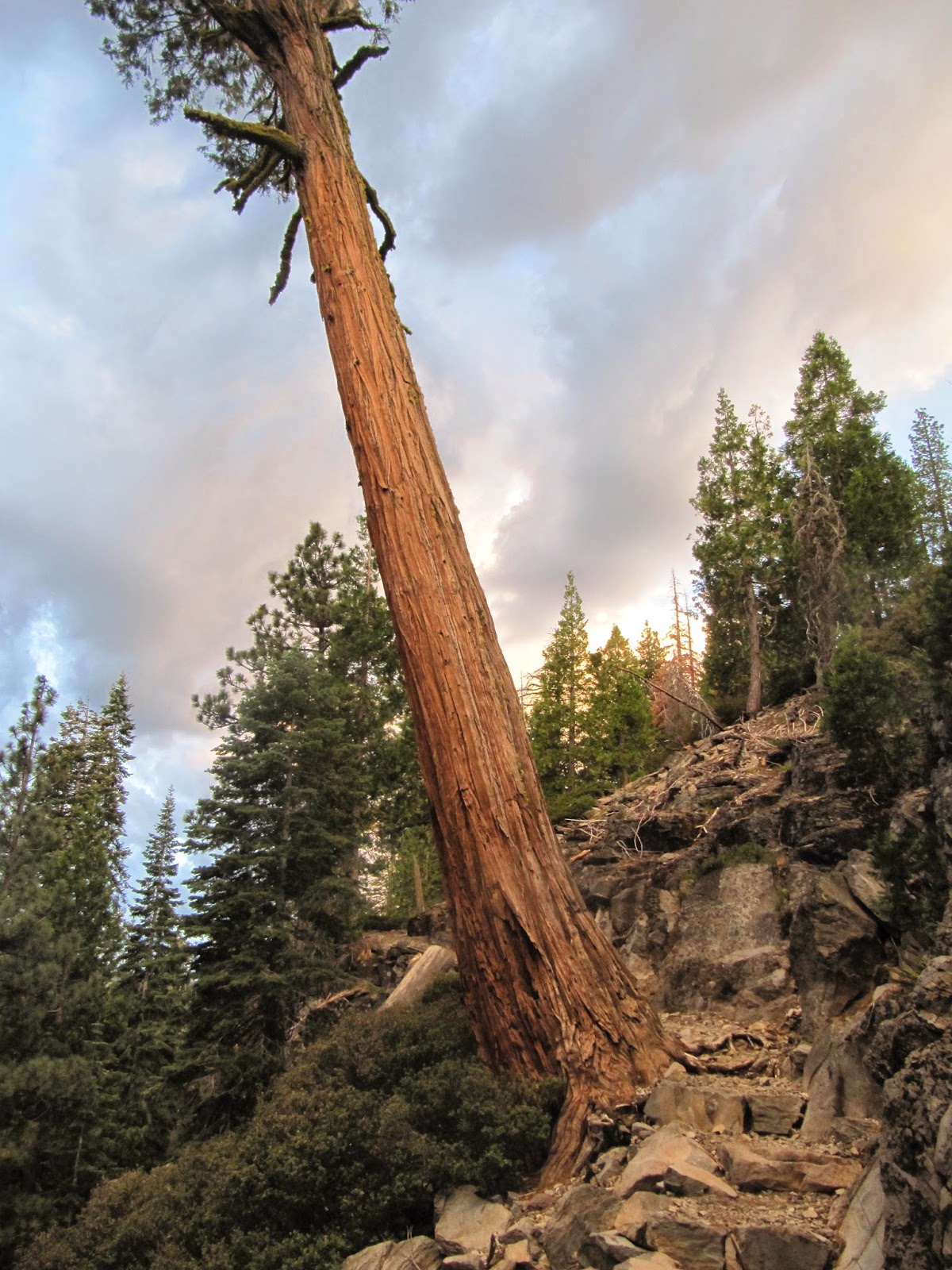 The trail passes just to the right of this giant tree who stands like sentinel guarding the way.
Posted by Richard Jones at Saturday, June 15, 2013