The weather was warm today and the trekking was slower than I would have liked. Ponderosa pines were the primary shade trees along with Douglas-firs and incense cedars.  Within a few hours, the trail descended into Rock Creek Canyon and crossed a steel bridge over Rock Creek.  Just below the bridge were several small falls, while just upstream from the bridge were delightful pools where one could relax and enjoy the cool waters before hitting the trail again.

By the time I reached the creek, Pia, Cowgirl, Sherpa C, and Charlie were already lounging beside the pools enjoying lunch.  I scurried down the scree slope to join them, and in a matter of seconds, my bare feet were in the water, and I was splashing copious amounts of water into my face and onto my head.  It was so refreshing, I couldn’t stop.  After lunch, the group decided to rest in the shade for a couple of hours before moving on; I succumbed to peer pressure and stayed with them.  Pulling my Z-pad from my backpack and placing it on the ground, I lay down and promptly fell asleep.  After two hours, we were all up and at it again.  I was the last one to leave and as I’m getting my gear together, Commando came flying down the trail and dropped down beside me to enjoy the water and have lunch.

The area surrounding the trail was laced with logging roads; most I couldn’t see, but many, in the course of the day, I would cross.  Much of the land was privately owned, and as a result had been heavily logged.  Seen from the air, the land was a patchwork quilt of dense green forest surrounded by swaths of brown, clear-cut land.  Eventually the clear-cuts would be reseeded and in a few years another crop of healthy trees will be ready for harvesting.

Any direction but north that the trail traveled just meant added miles to an already long journey and the upcoming section was a prime example of this fact.  The trail builders decided to link two major scenic, geographic areas together – Burney Falls and Castle Crags, by routing the trail west from Burney Falls State Park around the southern slope of Mount Shasta to Castle Crags State Park on the west side of Mount Shasta.  This westward routing added about eighty-three miles to the trail, but in terms of thousands of miles, what was another eighty miles.

It was almost dark when I entered the wide spot in a road that constituted the camping site at Peavine Creek.  Tents were already set up in the most desirable places, and I had to scramble to find something suitable for the night.  I finally settled on a small section of the Jeep road that was covered with gravel road base, and hoped there would be no traffic on the road during the night.  I could hear the water in the creek, but I couldn’t see it, and Commando had to show me the opening in the bushes that lead down to the streambed.  I put on my headlamp to find my way through the tangled web of bushes and tree limbs to the water.  I slipped and fell several times, but only let out a loud yell rather than utter a tastier four-letter word.

It took me about a half hour to set up my camp, eat a meal, and prepare my food for the next day’s journey; if I didn’t prepare everything the night before, these same procedures would delay my exit from camp the next morning.

Preparation required selecting six snacks and stuffing them in a pouch in my waist belt, then selecting several meals from the scent-proof plastic pouches that I carry all my food in, and transferring them to the stuff sack that carried the peanut butter and jam, tortillas, cheese, and hard salami, etc.  I purposely situated my campsite away from the others; as always, I know I will be leaving early, and I didn’t want the light from my headlamp to annoy them.

It would take me three more days of hard hiking to reach the Sacramento River that flowed past Castella, and my mileage for each day was twenty-five, twenty-six, and eighteen respectively.  This morning I left camp at three o'clock with anticipation of getting to the post office at Castella before it closed at three in the afternoon.  If I were unable to retrieve the resupply box this afternoon, that meant I would have to lie over until tomorrow –Tuesday, which I didn’t want to do.

In the early morning hours, I was walking by the light of my headlamp, which was not very bright because of low battery power, following the path along the McCloud River; in the dark, I missed a critical trail junction where the PCT left the trail along the river, made a sharp U-turn and headed up the mountain.  I walked for several miles down the wrong trail, all the while having a sneaking suspicion that I was not where I wanted to be.  The tip-off was that I was not seeing the diamond-shaped aluminum markers that were generally attached to trees along the PCT.  I backtracked and found the junction I missed; the effort I made to get an early start had now been wasted.  I should have slept in and started walking when it was light, but I could only say this in hindsight. 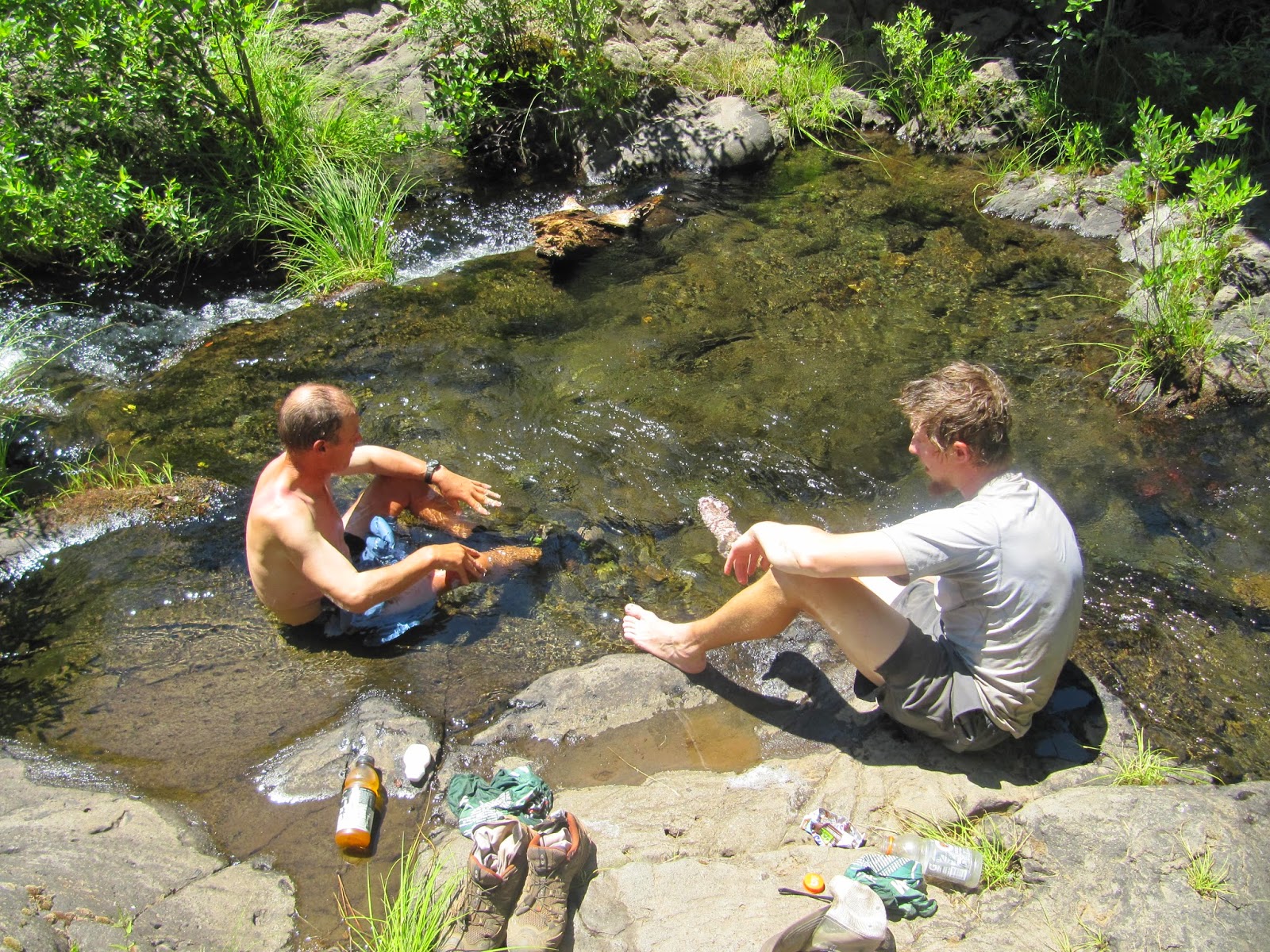 The refreshing pools of water in Rock Creek. 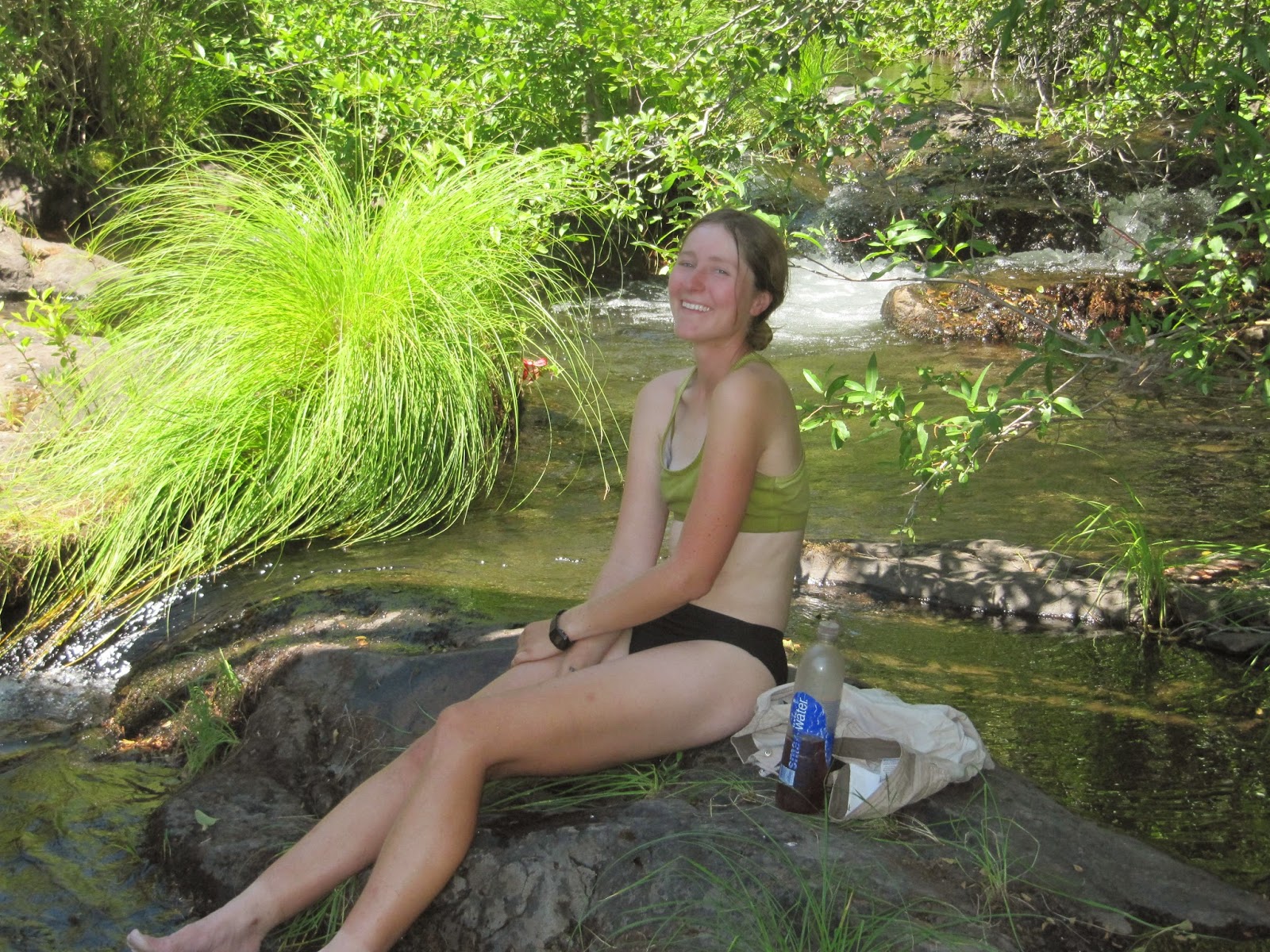 Pia enjoying her time at the pools. 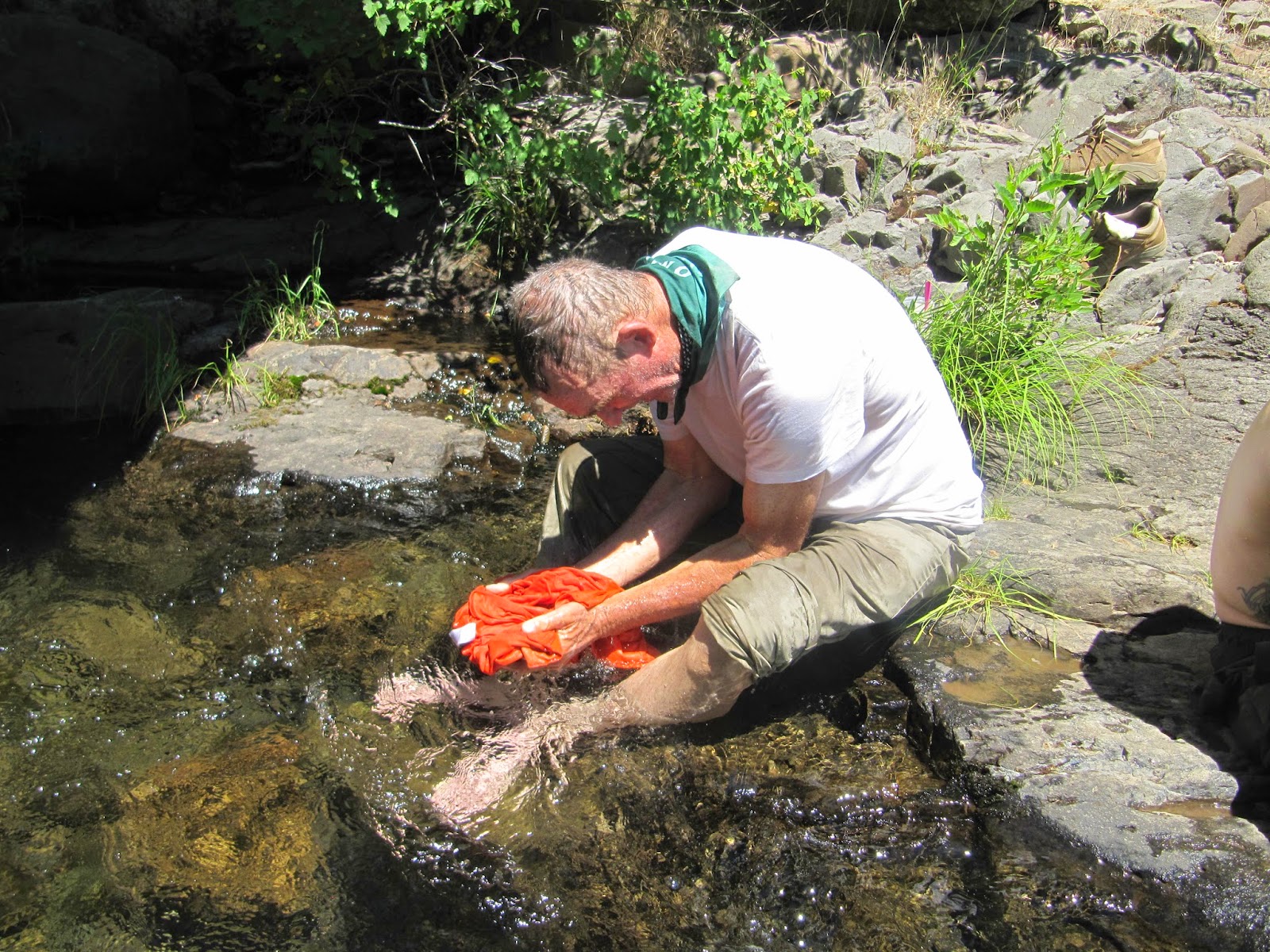 The water was cool, not cold, and I spent much time just soaking my face and head in the refreshing water. 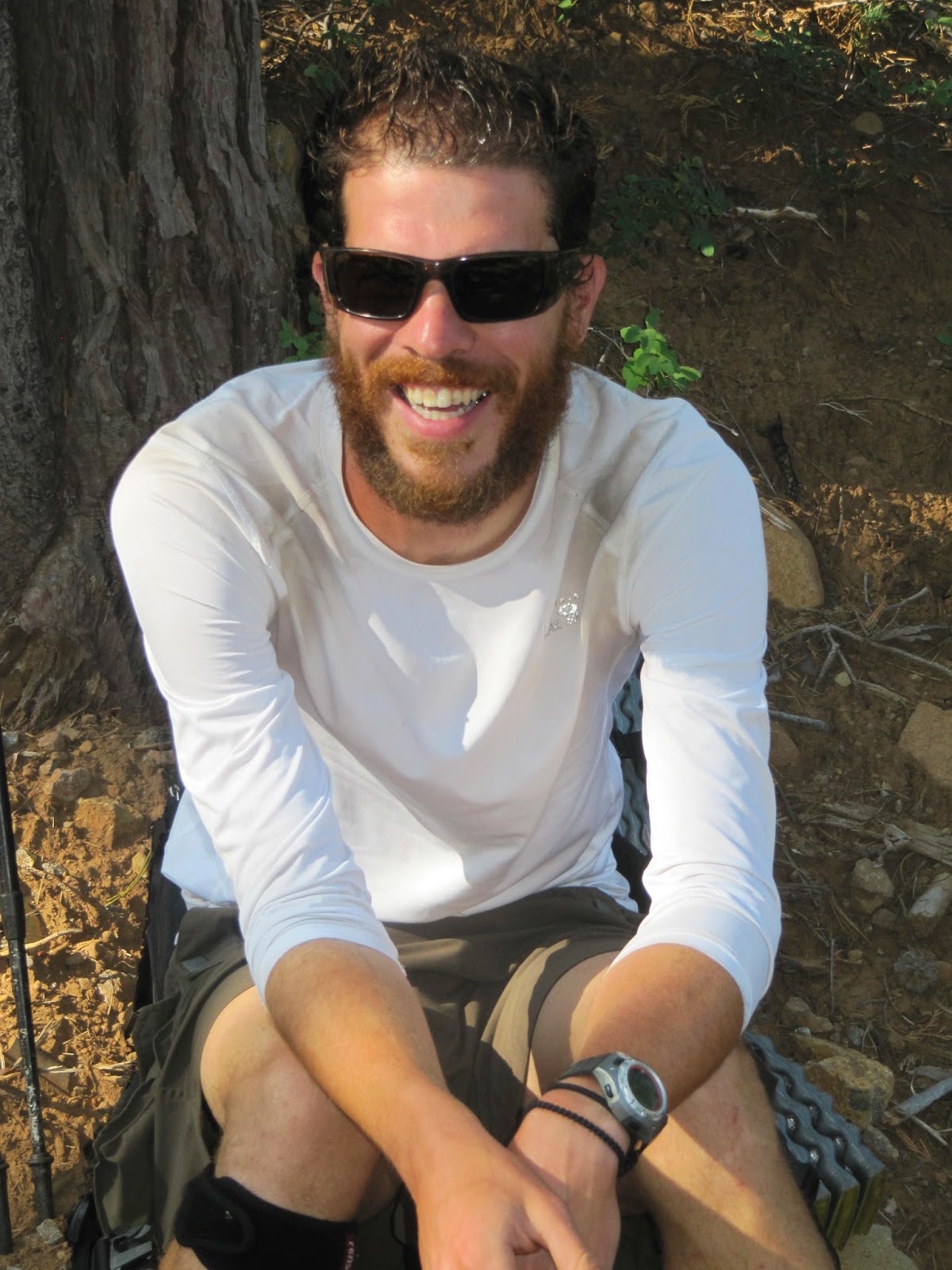 The legendary Commando, who I met on the first day at Campo. He's still wearing his kilt. 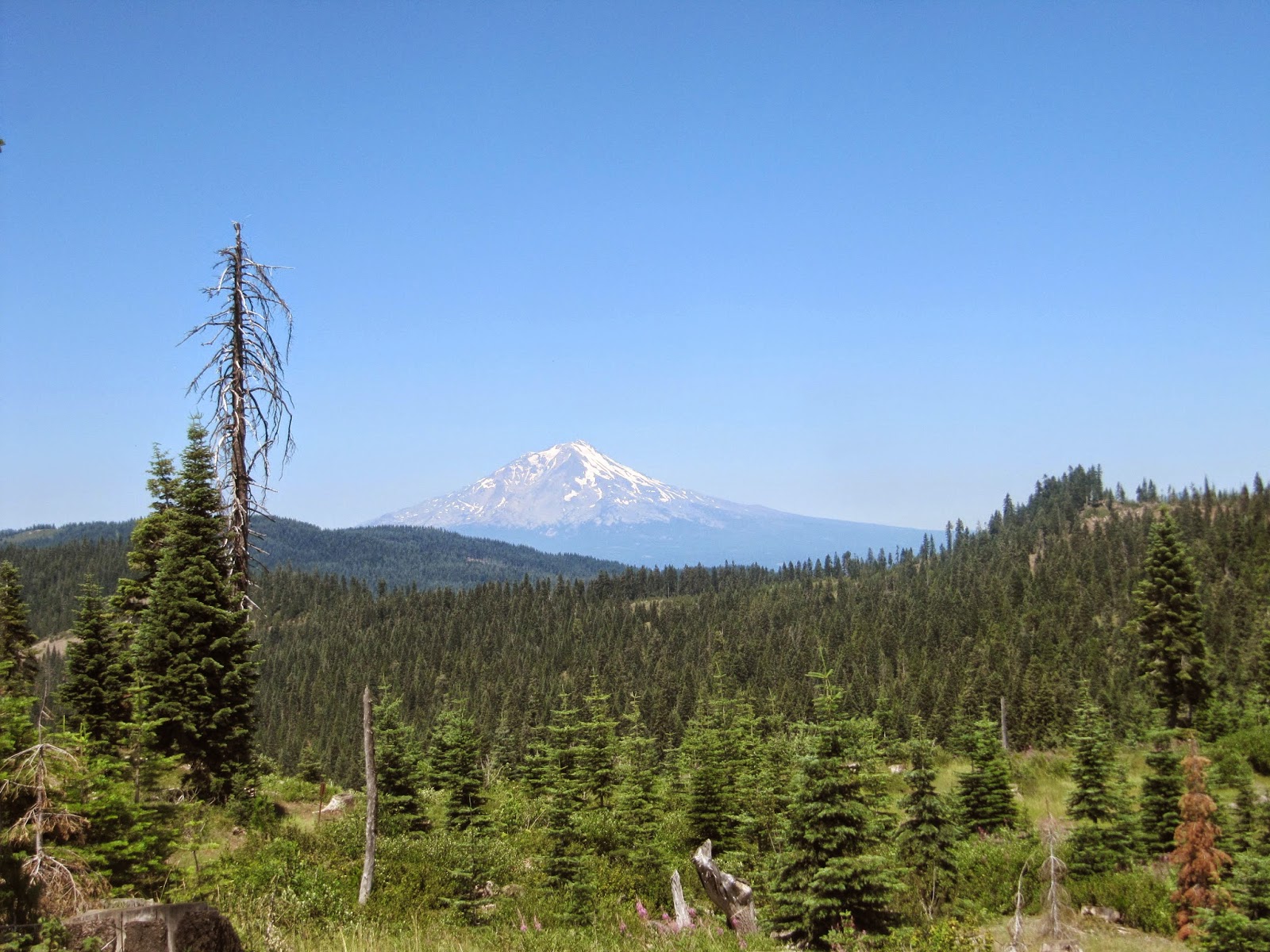 After Mount Lassen, the next volcanic peak on the horizon is Mount Shasta, which dominates the horizon. 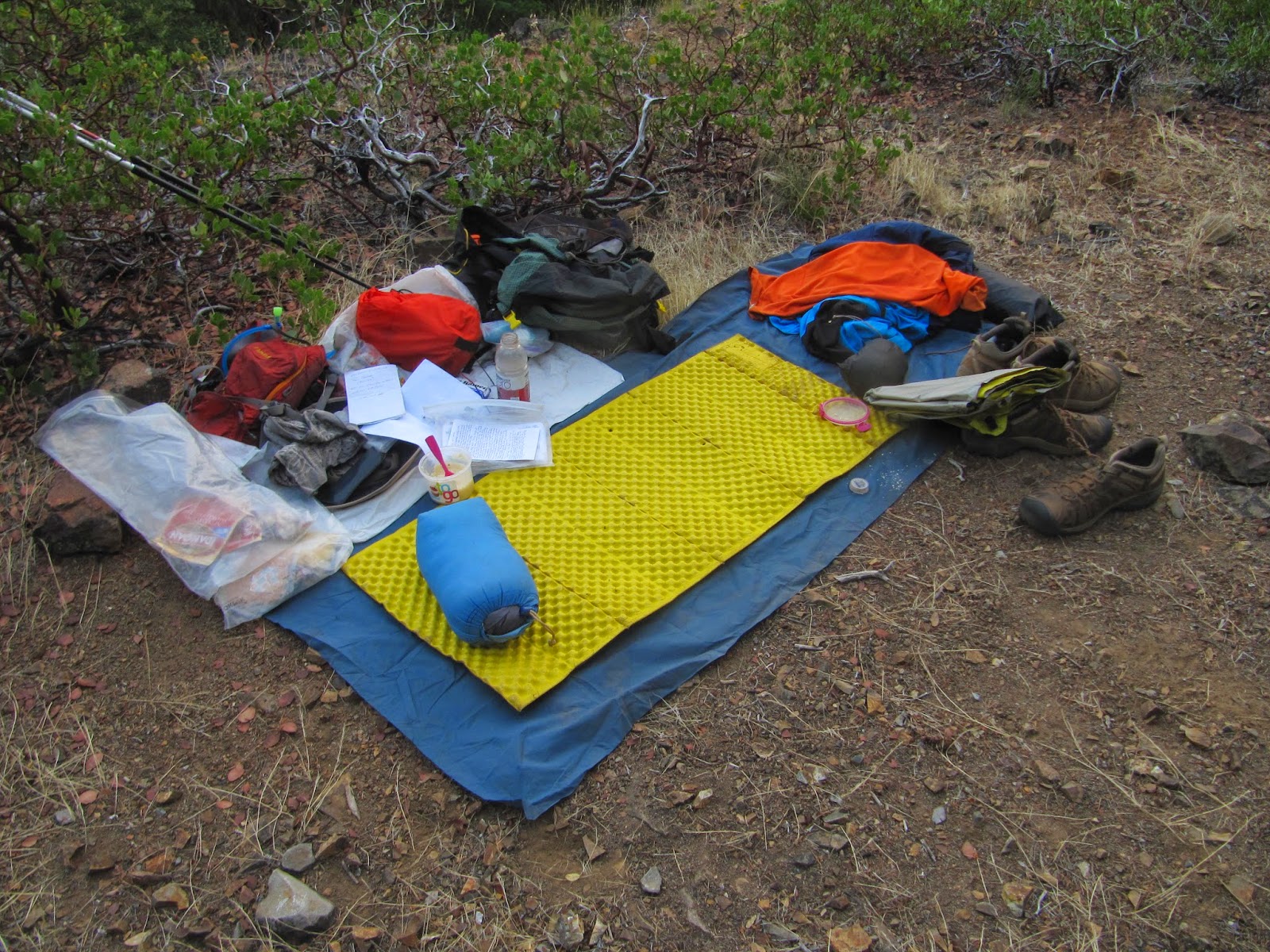 My campsite for the evening. Rarely did I ever put up my tent. 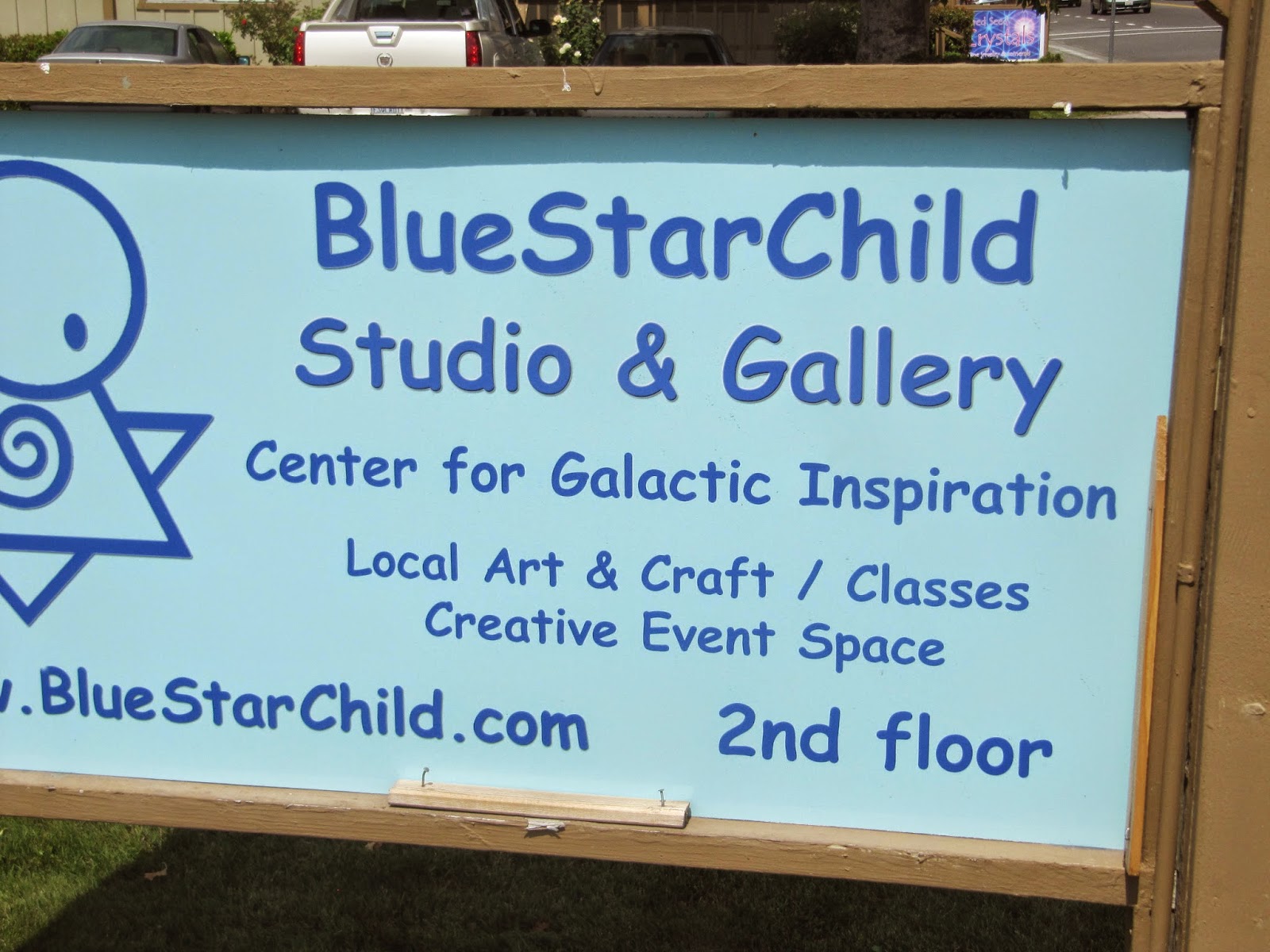 This sign from Mount Shasta really reflects the atmosphere of the town. 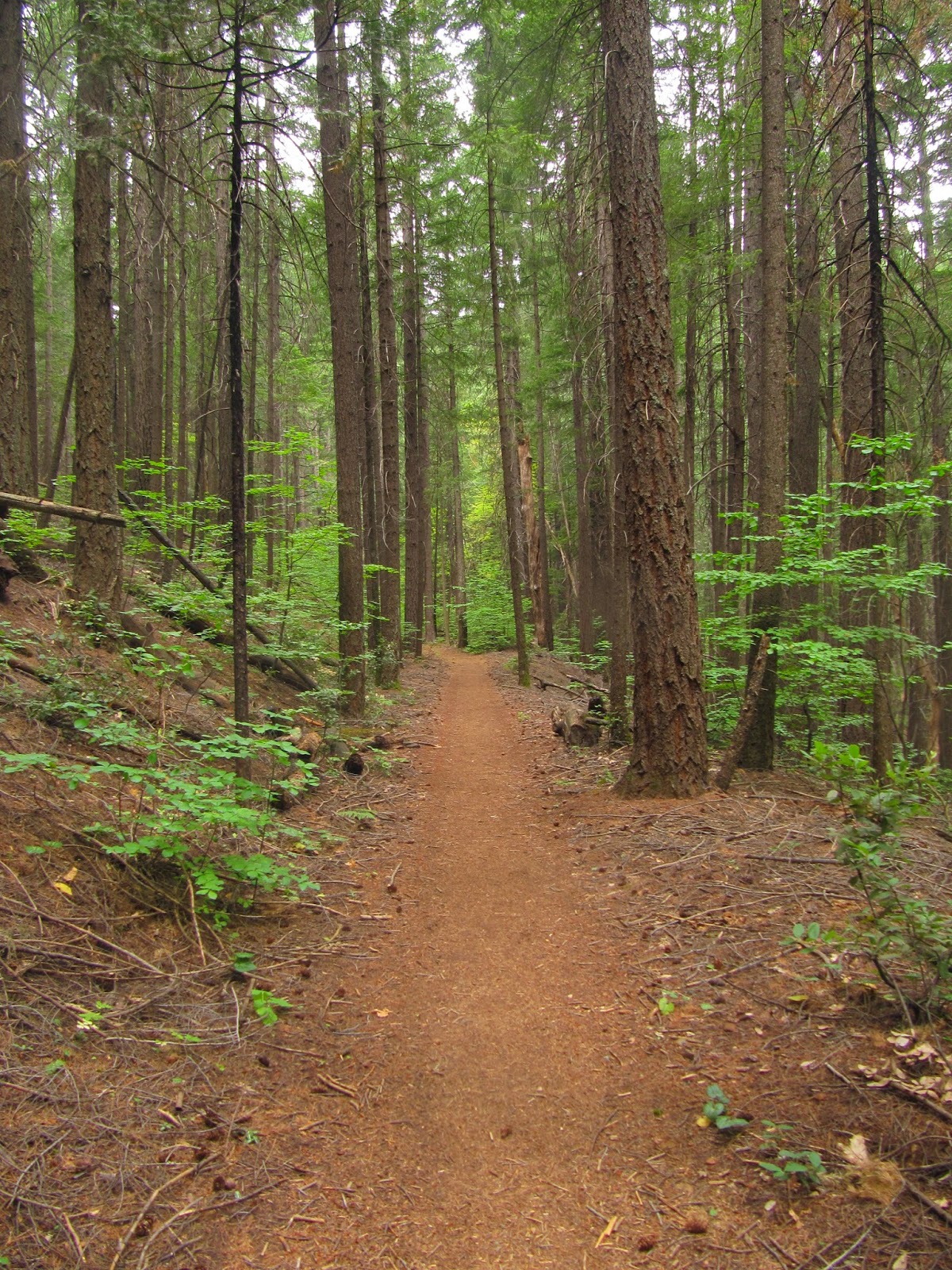 A walk in the woods. Hey that would be a great name for a book. 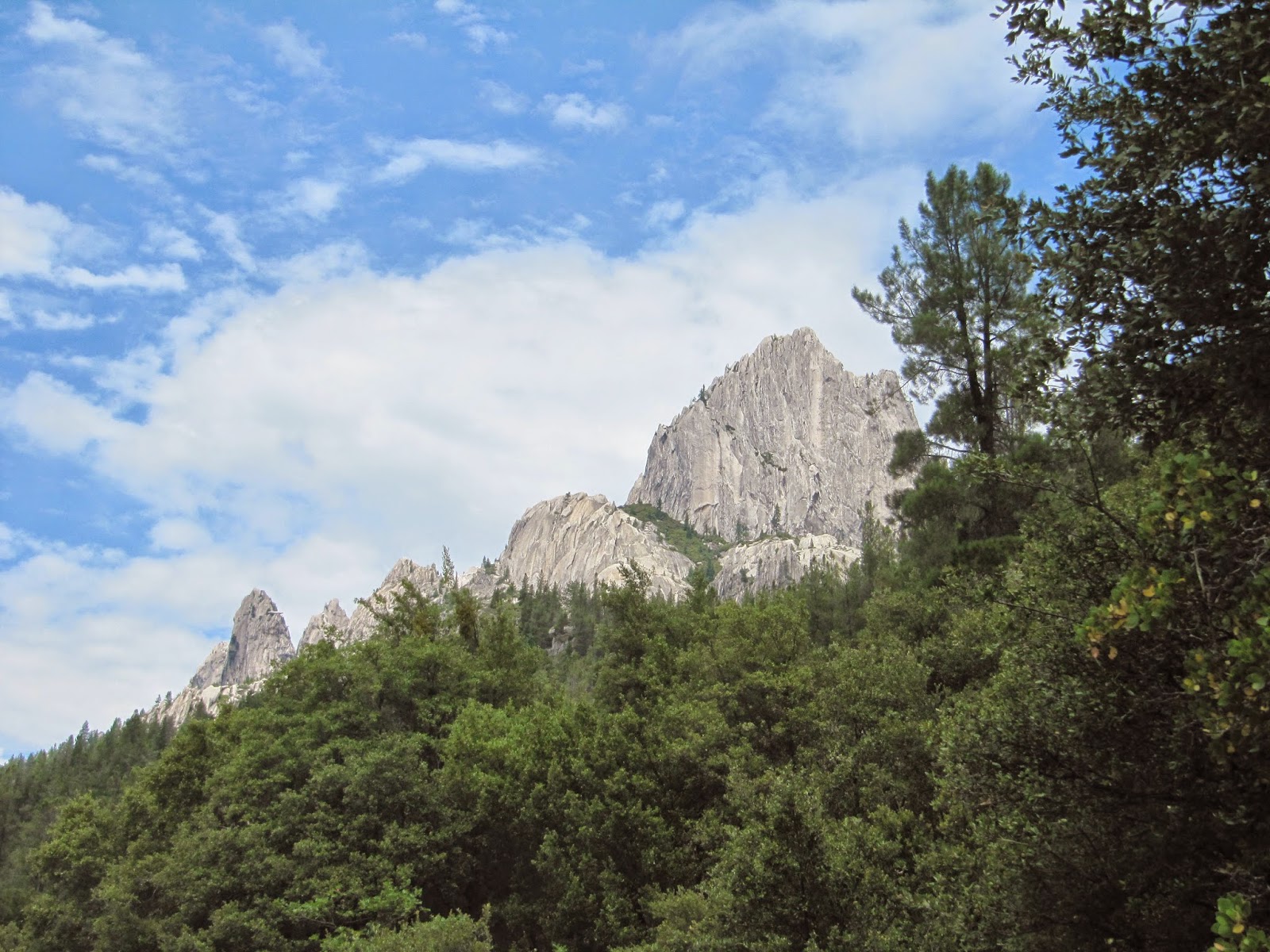 The crags of Castle Crags.