On the rivers in Utah, before coming into camp, it was customary for one of the boats in the party to stop at a driftwood pile and collect sufficient dry wood to supply fuel for the evening meal and the breakfast meal the next morning.  As I looked around the sand island on which we were camped, there wasn’t a lick of driftwood, not even a tiny speck.

This was more than a serious problem; I conferred with my guide and the local Mexican guide I had made arrangements with, about the challenge of finding wood for a fire.  The Mexican guide suggested we take the boat over to the bank of the river and look for driftwood there, and/or chop wood from bushes or trees hanging down towards the water.

This we did, but we found no driftwood; the river in high water had scoured the beaches and banks of the river clean of any wood; likewise, any wood we procured from the overhanging trees along the riverbank was damp, and why shouldn’t it be; after all, this is the rain forest.  The Mexican guide took an axe I had with me and cut down a ten-inch diameter tree, then split the log into kindling-size wood.

We hauled this wood back to camp and attempted to make a fire, but the wood was green, and even after soaking it with gasoline and using the big manual boat pump as a billow, all we got was a weak, smoky fire.  Dinner tonight was to be tortillas with all the fillings and toppings just as one would buy at a taco stand.  Desperate to get something, anything going for dinner, I mixed the tortilla flour with water until I had the right consistency and then sectioned off small pieces that I rolled into balls to be pressed flat in the tortilla press.

This we tried and it worked a little better, so with help from the passengers, we began an assembly line of making tortilla shells.  It was a slow process, the smoky fire could hardly cook the shells, let alone the meat that needed to go in the shells, and it was late at night before everyone had at least two tortillas.

To say that the trip wasn’t going well would be a gross understatement.  However, the mantra I’ve always followed that has sustained me in more than one venture, is the scriptural statement that says
“If ye are prepared, ye shall not fear.” (D&C 38:30)

Always trying to stay one step ahead of potential trouble, it was for this reason that I purchased a new Ford pickup truck for the long journey into Mexico, brought a new Mercury outboard engine plus two spares for the journey on the water, and carried a gas generator on the boat to power hand tools if I needed to make repairs on the rubber boat.  To this list of preparatory steps I could add the brand-new three-burner Coleman Stove I purchased as a backup to wood fires, and a sufficient quantity of freeze-dried dinners to be used in case we ran out of food.

For the rest of the journey, with the help of the Coleman Stove, I was able to prepare sufficient quantities of meals for the group, and the freeze-dried dinners, although not gourmet by any means, provided us with sustenance, such that we weren’t starving.  To be sure, there was grumbling among the passengers, but at the moment, there wasn’t much I could do about it.

The next day, around four o’clock in the morning, an ungodly noise began to reverberate through the jungle; it sounded like howling.  It lasted for several hours, and everyone was mystified as to the source.  By 8:00 a.m., we were on the water, floating through an eerie fog that has settled on the river, obscuring our vision of anything on either side of the river.

As the morning wore on, the fog slowly began to lift.  At a bend in the river, we spotted a group of large monkeys playing on a sandbar adjacent to the water’s edge.  They were making the same sound we had heard early this morning, and then we realize that the monkeys were howler monkeys and they were the ones responsible for the sounds we heard.

After the fog had fully dissipated from off the water, we had the incredible luck to see a flock of brightly colored macaw parrots flying single file through the air.  Macaws have feathers that are red, yellow, green, and blue, which made them look like a rainbow flying through the air.

There were two massive Mayan ruins we wanted to visit, Yaxchilan on the Mexican side of the river, and Piedras Negras on the Guatemalan side of the river.  We visited both, and without a doubt, seeing these ancient structures in the dark and gloomy jungle was the highlight of the journey.  At the caretaker’s home next to the Yaxchilan airstrip, I traded all of the tortilla flour, about twelve bags, for a bucketful of citrus fruit.

From the caretaker at Yaxchilan, we learned that there was another group on the river, just a few days ahead of us.  They were Americans, eight in number, traveling in kayaks and sit-on-top canoes. 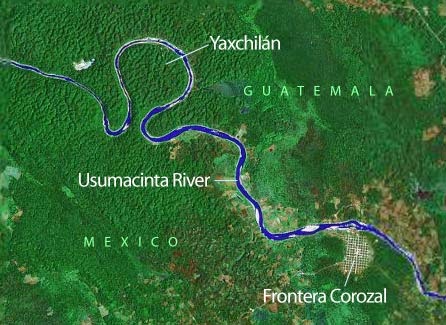 Aerial photo of the Usumacinta River and the location of the ruins of Yachilan.