After taking a shower and repacking our backpacks with the contents of our resupply boxes, kindly, saintly, trail angel Brenda drove Commando and me to the trailhead that was just opposite the Belden Resort Bridge.  It turned out that the PCT was not the steep, switchback trail Commando and I had seen from the top of the mountain yesterday.  No matter, we go wherever the trail takes us.

Adjacent to the trailhead was an historical marker detailing some of the mining activity that occurred in the canyon, specifically hard rock mining that produced gold ore.  To highlight the theme of milling and ore processing, a five-ball Eby stamping mill had been erected for public viewing.  The action of the stamps, some weighing as much as two hundred pounds, was controlled by the rotation of a cam, in much the same manner as a camshaft in a combustion engine operates to open and close valves.  The stamps would alternately rise and drop, crushing the ore, which was then mixed or amalgamated with mercury located at the bottom of the stamp.

Gold, no matter how fine, will adhere to mercury, which was then heated in a retort.  The mercury vaporized and was recycled, leaving only the concentrated gold.  It was an effective method for processing gold, and the miners in the Feather River Canyon extracted millions of dollars worth of this precious metal.

This was the same recovery method that Robert Stanton tried to use with his Hoskininni dredge in the Colorado River in 1898, but which turned out to be a total bust.

I knew what lay ahead of me, and I felt completely exhausted before I even started up the trail.  It was four thousand feet of uphill climbing stretched over approximately twelve miles, but every journey begins with the first step, and this one was no different.  My goal for what was left of the day was the Williams cabin, some five miles up the trail.  Commando said that was where he was going to camp, and I hoped to meet him there.

The trail climbed into the mountains above Chips Creek and stayed in a forest of trees that were dark and gloomy, and with evening coming on, the effect was even more depressing and dreary.  The mountainside was steep and offered no place to set up a camp, and I knew I had to make it to the cabin site before I could quit for the night.

I walked on and on, yet no cabin came into view.  I checked my GPS often to see where I was in relation to where I wanted to be.  The GPS said it was just a little farther, but now it was dark, and I could barely make out the trail in the dark forest.  I crossed a small stream and entered a clearing of sorts.  In the distance among the dark trees, I could just make out a small flicker of light.

I left the trail and walked towards it, and found Commando sitting beside his tent with his headlamp on, diligently writing in his journal.  I greeted him, and asked if this was where the Williams cabin was located.  He said he wasn’t sure; he hadn’t seen a structure when he arrived here an hour earlier, but decided to stay anyway, as it was the only flat spot he had seen in his hike up the mountain.  He indicated there were several flat places a few yards from his tent; and I went to investigate.  I located a suitable spot, erected my tent, and called it a day.

I left camp this morning at 5:30 a.m.  Commando was not stirring, and probably wouldn’t even poke his head out of his tent until around 8:00 a.m.  As I walked though camp, I passed a fire pit that had the remains of a cooking pot sitting on a few pieces of charcoal, and a few feet from the fire pit, tacked to a tree was a wooden sign that has been scorched by fire, and read Williams Cabin.  Apparently this was the site of the Rex Williams cabin but the cabin had been destroyed in the Belden fire that swept through the area two years ago.

I walk until 12:30 p.m., seven hours straight, and only gain eight miles.  The climb had been uphill all morning long, at the stupendous pace of the Old Man Shuffle.  I was exhausted, tired, and beat and took an hour’s lunch break before moving on.  At 5:00 p.m. I called it quits for the day; in fact, I was through with the whole trail.  After I put my tent up, I tried to make a call to Jodie on my satellite phone, to tell her I was through with the hike; I simply could not go on any farther.

The call didn’t go through, and I retreated to my tent and promptly fell asleep.  I sleep straight through until five the next morning.  In my exhausted state, I still hiked seventeen miles, and camped at mile 1,310.5.

As tired and exhausted as I felt, as discouraged and depressed as I sometimes became because of the fatigue I often experienced, I was still glad to be on the trail; still happy to be pushing myself to the breaking point, for I knew that quitting was always an option, but a night’s rest, a bowl of oatmeal, and a new day always seemed to turn things around.

A new dawn has a way of making things look better; I’m grateful for the experiences I was having, for the new people I’ve met, for life itself

But like fatigue and exhaustion, which merely become a part of the total package of experiencing life on the trail, some hikers acquire a more intense awareness of life in the wilderness than others.  Muk Muk, a female hiker from Australia, falls into this category. 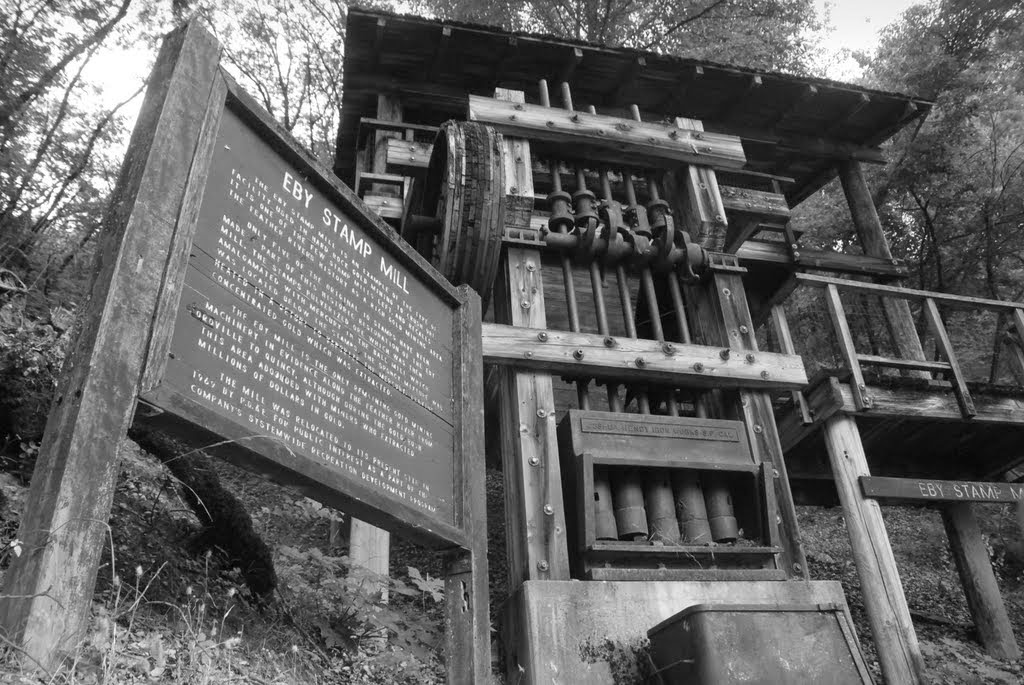 These stamping mills were commonly found along the rivers on in the backcountry. It was the primary method used by hard rock miners to extract minerals from the rock matrix.