After finishing my meal and recharging my cell phone batteries, I retraced my steps back through the campground, past the pickups and horse trailers, to where I could pick the trail up again.  It was now dark and I didn’t want to walk any farther, so I went off into the woods and with the help of my headlamp, clear a space on the ground underneath the trees and laid out my bedroll.

Heading north, the trail builders now had a difficult decision to make – route the trail low, around private land holdings where water from Hat Creek was available in the valley adjacent to Highway 89 or build it high on the valley’s volcanic rim, where no water was available.  For whatever reason, thirty miles of waterless trail was built high on Hat Creek Rim, a volcanic plateau that overlooked Hat Rim Creek in the valley far below.

Like many points on the trail that require true grit, great physical effort, and prolonged endurance to succeed, the upcoming thirty-mile section of volcanic, waterless trail had a reputation that will demand the best effort on the part of any hiker setting foot on the trail.  It was not exactly the same as the eighty miles of mud and salty muck that the Donner Party faced in crossing the salt flats south of the Great Salt Lake, but the Hat Creek Rim Trail is a second cousin.  I started the trail this morning with five liters of water and was confident it will be enough to see me through to the next water source, even if the water caches along the way were dry.

From my camping site last night, the trail climbed a small ridge, and then paralleled Highway 89 for several miles before crossing Highway 44 that came off the top of Hat Creek Rim.  The drop off the rim appeared to be at the same location as the original William Noble 1852 trail.

Much of the vegetation at the beginning of the rim trail had been destroyed by one or more forest fires, and the resident land manager had cut down many of the blackened trees, leaving a vast, wide-open space that was currently being reseeded.  From the top of the rim, I could look west into the valley far below and see traffic moving along Highway 89.  It was, indeed, hot and dry on the rim with little shade.  In the early afternoon after walking for several hours along the dusty and rocky trail, I rested for a bit in the sparse shade of a juniper tree.  Yashinka passed me, but did not see me lying on the ground under the tree.

There were two prominent geographical features that dominated the view from the rim; first, the massive lava flow on the valley floor, just below the rim, whose origin was some unnamed volcano to the north; and secondly, snow-covered Mount Shasta about seventy-five miles to the north as the crow flies.

I walked until nine that evening, and then camped on a small rock outcropping overlooking the Hat Creek Valley below.  The temperatures were moderate today, so the hiking wasn’t as bad as anticipated.  The moon was full, and there was no wind to disrupt the serenity of the evening.  Far in the distance to the north were the blinking red lights that signaled the presence of many wind turbines, and indeed, during today’s walk, I could see the outline of numerous turbines on ridges below Mount Shasta.  I covered twenty-six miles today, one of my better days, primarily because there were no uphill climbs.

I was on the trail by four thirty this morning; I was wide awake at four o'clock, and it just seemed a shame to waste valuable walking time lying in bed.  Five hours of walking should get me ten miles by 10:00 a.m.  Preparing for the trail, I put my Camelbak hydration pack on first, followed by my backpack.  I still suffered pain from wearing the backpack, especially late in the day, but I have just learned to live with it.

As I began the morning’s trek, I noticed tiny little piss ants were crawling all over my shirt and hydration pack.  I brushed them off, but they kept reappearing.  For most of the day, I found ants still crawling on my shirt.  After an investigation, I discovered that the bulk of the ants were inside the sleeve that held the hydration pack.  I had been putting powdered flavoring in my water reservoir and some of the flavored water had spilled inside the sleeve.  The ants discovered the sugar water, and during the night, a whole colony took up residence in the bottom of the hydration sleeve; they got high on the liquid, and forgot to leave in the morning.

I encountered two water caches on the rim walk; one was sheltered under a large juniper tree that had the appearance of an Indian wickiup, complete with lounge chairs, and the other was beside a communication’s tower, known as cache 22, named for State Road 22 that passed in front of the tower.  I still had plenty of water by the time I found these caches, but I took advantage of both of them and refilled my water containers. 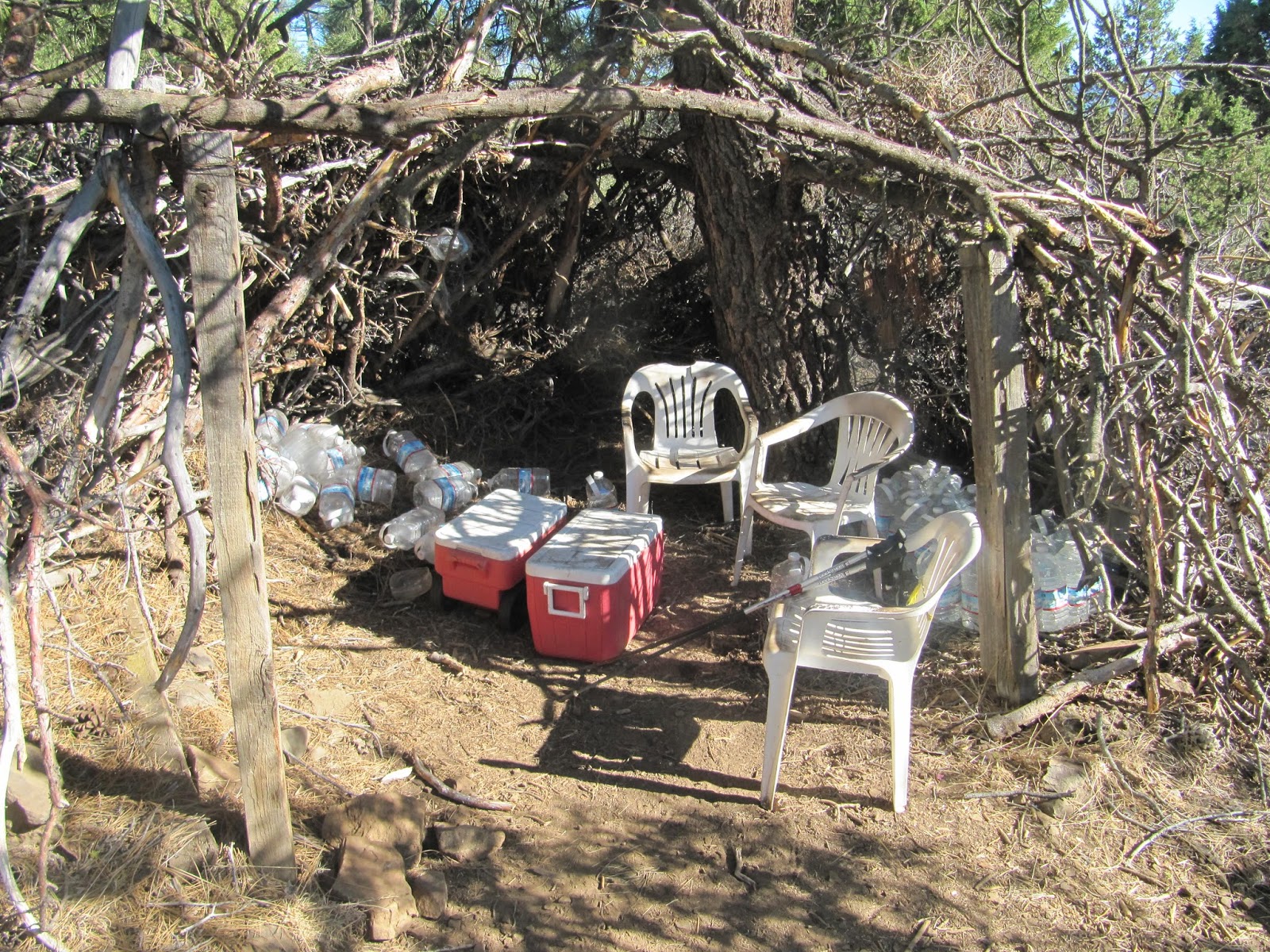 A water cache along Hat Rim Creek. As these caches can never be relied on, it's best to come prepared with sufficient water to walk the 30 mile section of Hat Creek Rim. 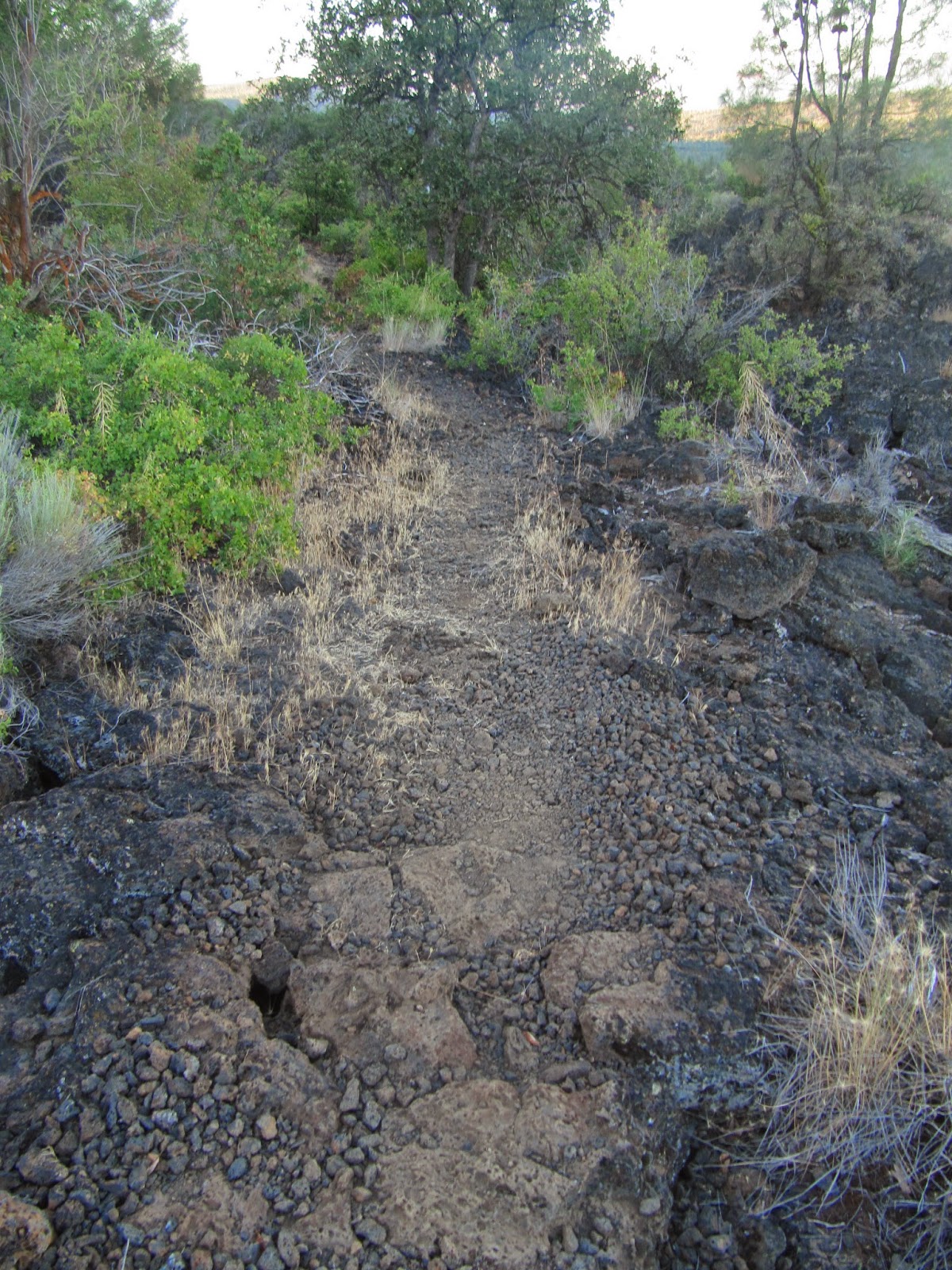 The trail on top of the Hat Creek Rim is across lava flows. 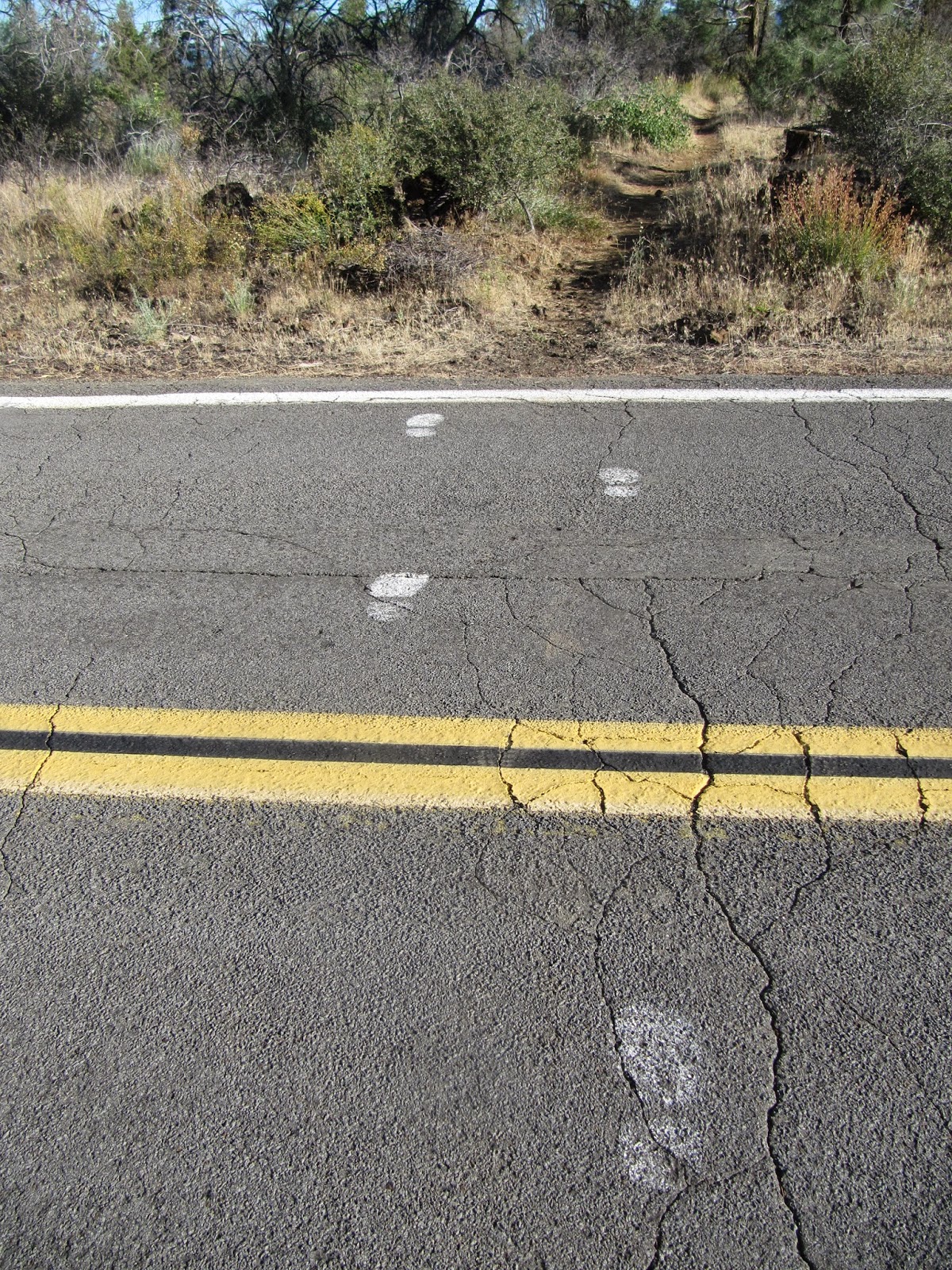 Yes, this is where the tail goes. 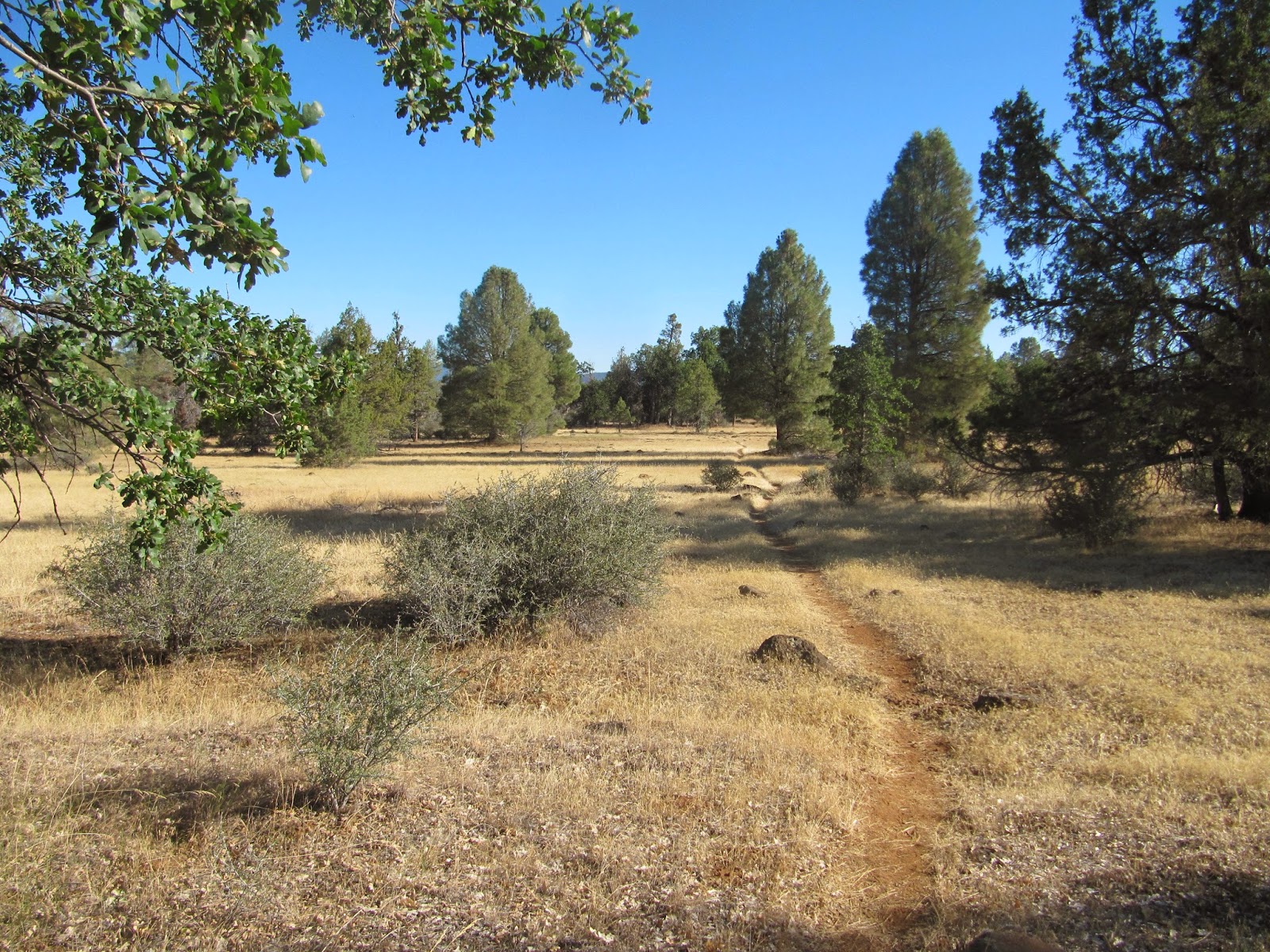 With moderate temperatures, it was pleasant walking on top of Hat Creek Rim.