Once in the vehicle, a late-model Ford pickup truck, I asked the driver if he would recognize the place where the PCT crossed the highway, because I knew there were no PCT logos on either side of the roadway to indicate the trail’s presence.  He said he did, but he overshot the spot anyway. I told him not to bother turning around and going back; I would walk back to the trail crossing.

Two hundred feet into the woods, after leaving the highway pavement, I found the most incredible bit of trail magic I would encounter on the trail that wasn’t hosted at the home of a trail angel.  These trail angels had built a sturdy wooden table on which was arrayed: a battery-operated radio to check the weather, a small camera to take a selfie (I guess so the trail angels could see who stopped at their offerings), a trail register, and bolted to the bottom of the table, a donation box.  There were lawn chairs in which to relax, coolers filled with drinks, milk, breakfast cereal, granola bars, fruit, chips and Cracker Jacks, and a box filled with first-aid items.  It was definitely the most elaborate trail angel camp I came across on the entire trail.  I grabbed a Gatorade, a few Granola bars, signed the register, and left a donation in the box.

The trail was level and I was moving fast as I hoped to make it to the campground store inside Burney Falls State Park before it closed at 8:00 p.m.  There were a number of roads in the area, so I had to watch carefully that I didn’t mistake a Jeep trail for the actual PCT.  Off to my right was the Pit River that flowed into impounded Lake Britton and on my left was the dry streambed of Burney Creek.  Beneath this creek bed was an unseen, flowing river that rose to the surface just feet after crossing a wooden bridge over the dry creek bed.  The volume of water that erupted from the springs below the bridge was enormous and was the sole source of water that cascaded over Burney Falls, creating the natural spectacle that drew visitors to the region.

As luck would have it, I arrived at the store just minutes after it closed.  I found Hermes and Lotus sitting at a picnic table in front of the store, so I joined them.  We debated where we were going to sleep for the night; the two of them decided to backtrack towards the PCT, while I elected to stealth camp back in the trees behind the store, as I had to stick around until ten tomorrow morning to retrieve my package that the postal service would be bringing to the post office located inside the store.  I erected my tent tonight as there were mosquitoes about; then, when it looked like all the tourists had settled in for the evening, I made my way to the restrooms and commenced to do a little laundry in the sinks.  The socks were the big culprits, being filthy dirty from the long hike on Hat Creek Rim.

As promised, the postal service truck arrived at ten the next morning, and I now had a new pair of Keen Voyageur shoes, but the old ones still had life left in them, so I’ll send them home when I reach the next trail town.  In the meantime, I just tied them onto my backpack and let them flop around as I hiked up the trail.

Cowgirl and her husband, Charlie, came into camp, as well as Commando.  We visited awhile, shared some cookies and drinks, then packed up and re-crossed the bridge over Burney Creek and picked up the trail just beyond, up a small hill.  At the trailhead was a large wooden sign that read Pacific Crest Trail, Mexico 1,418 miles; Canada 1,231 miles.  Even though it was still a long way, it really felt good to be on the downhill side of the total distance to travel.

My walking speed was still a mystery to me.  Most times, usually going uphill, it was a sluggish walk that sometimes slowed to a shuffle.  Other times, like this morning, with a fairly even tread, I could walk with ease and some speed.  Feeling a burst of energy, I flew past Cowgirl, Charlie, and Sherpa C, caught up to Pia and moved out in front of the group, like I was in a race.  Ahead of me was the dam that impounded the Pit River, forming Lake Britton.  I was across the bridge and up the hill before any of the others even started across the bridge.  If only such energy would last.  It was not long before they all passed me and I settled into my more leisurely pace. 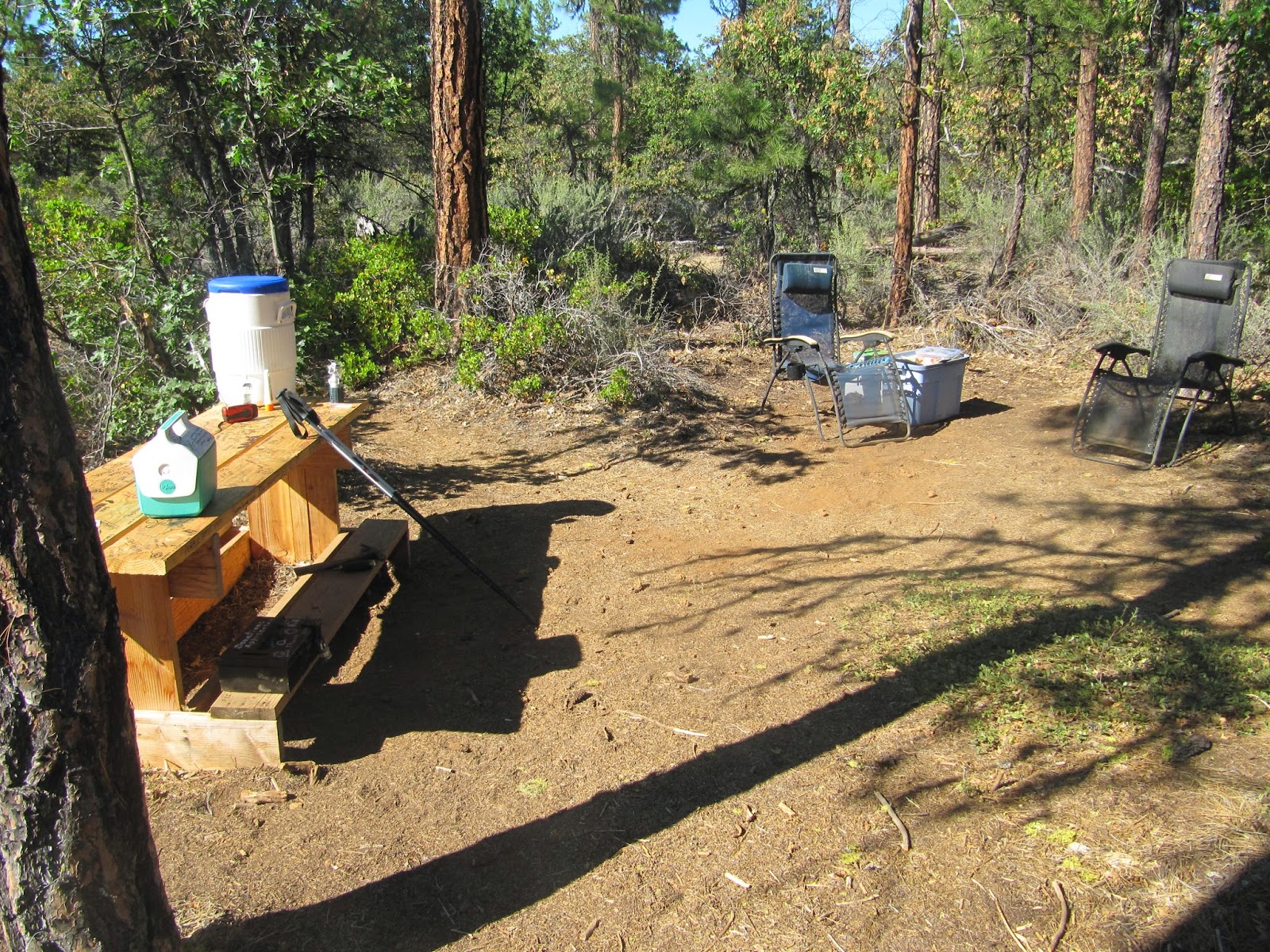 Just off the highway leading to Burney Falls, I encountered this very elaborate trail magic set-up. 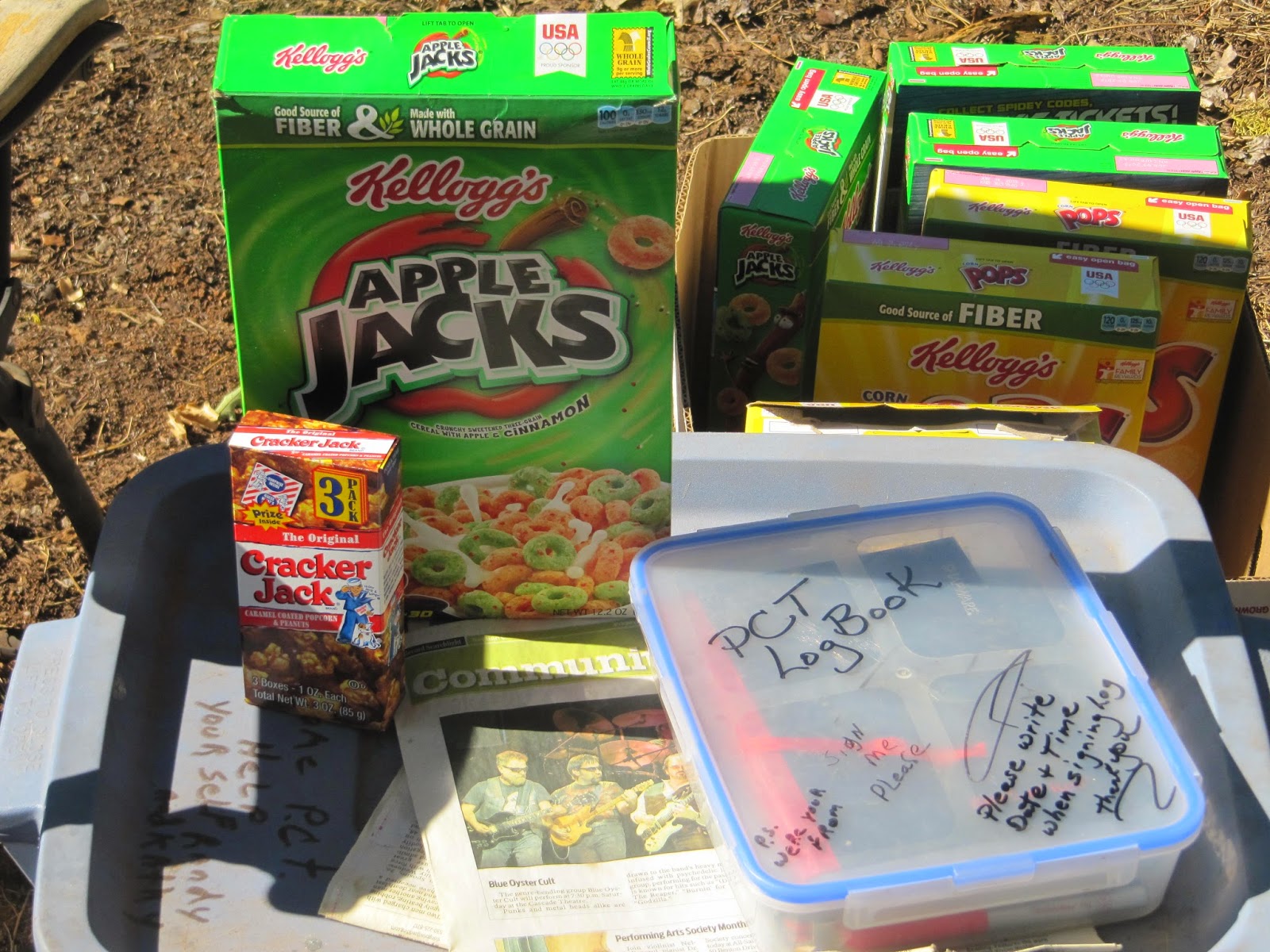 I partook of a little of everything, then left my donation in the ammo can. 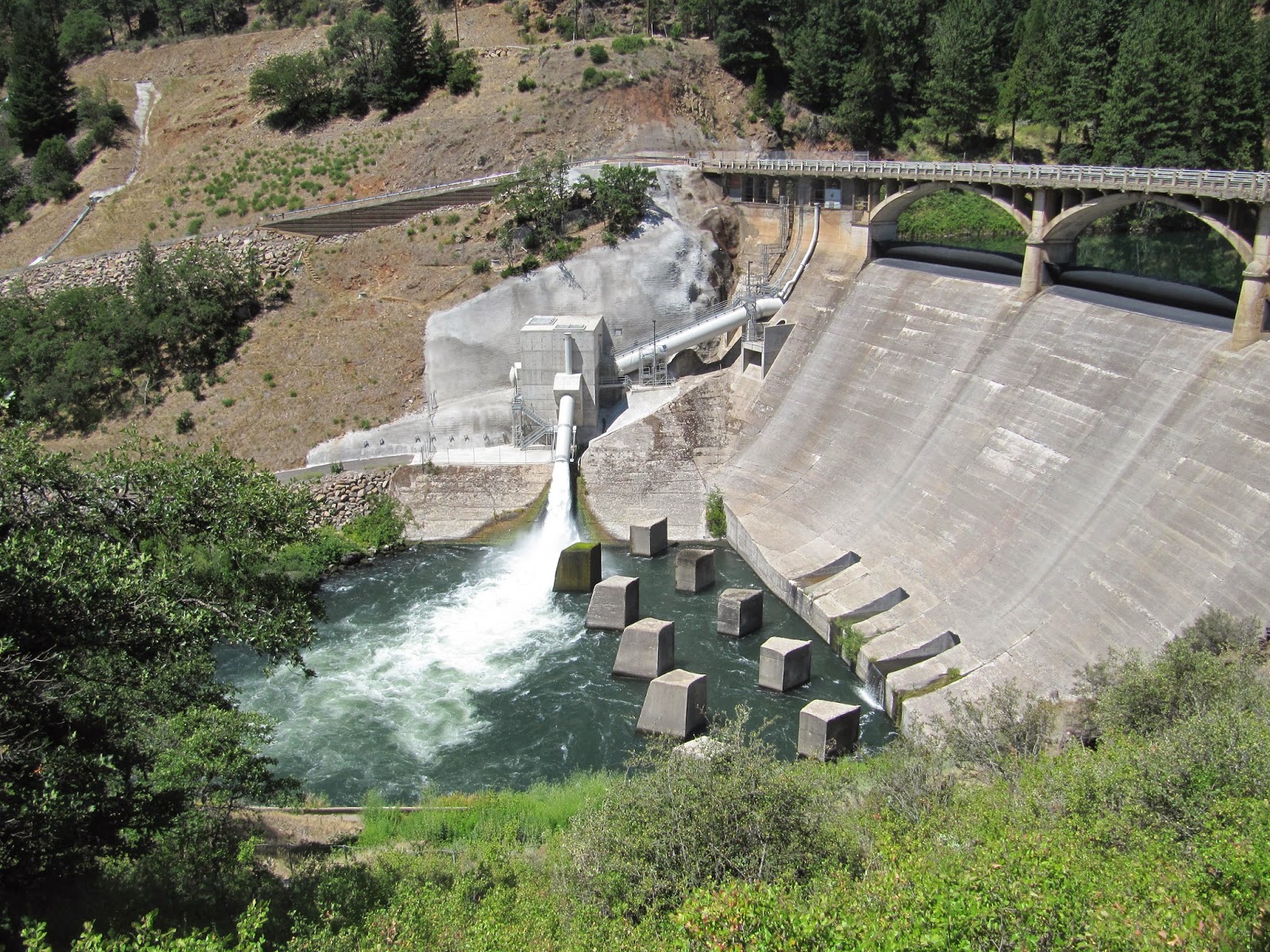 The Pit River Dam. The trail crosses over it and heads into the mountains on the other side. 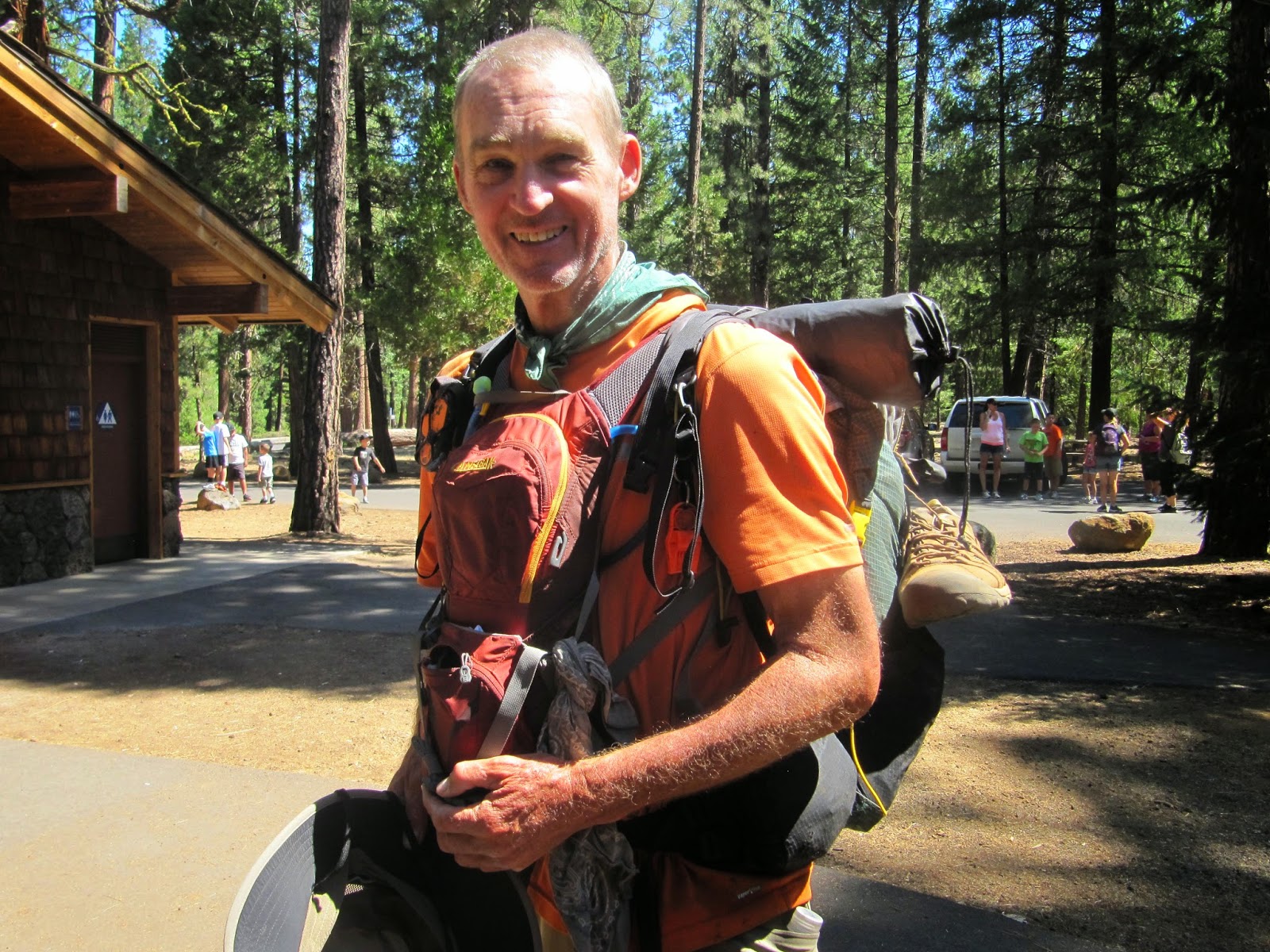 The postal service arrived on schedule; I have my new shoes and I'm on my way to Castella, the Sacramento River and Castle Crags. Moving forward. 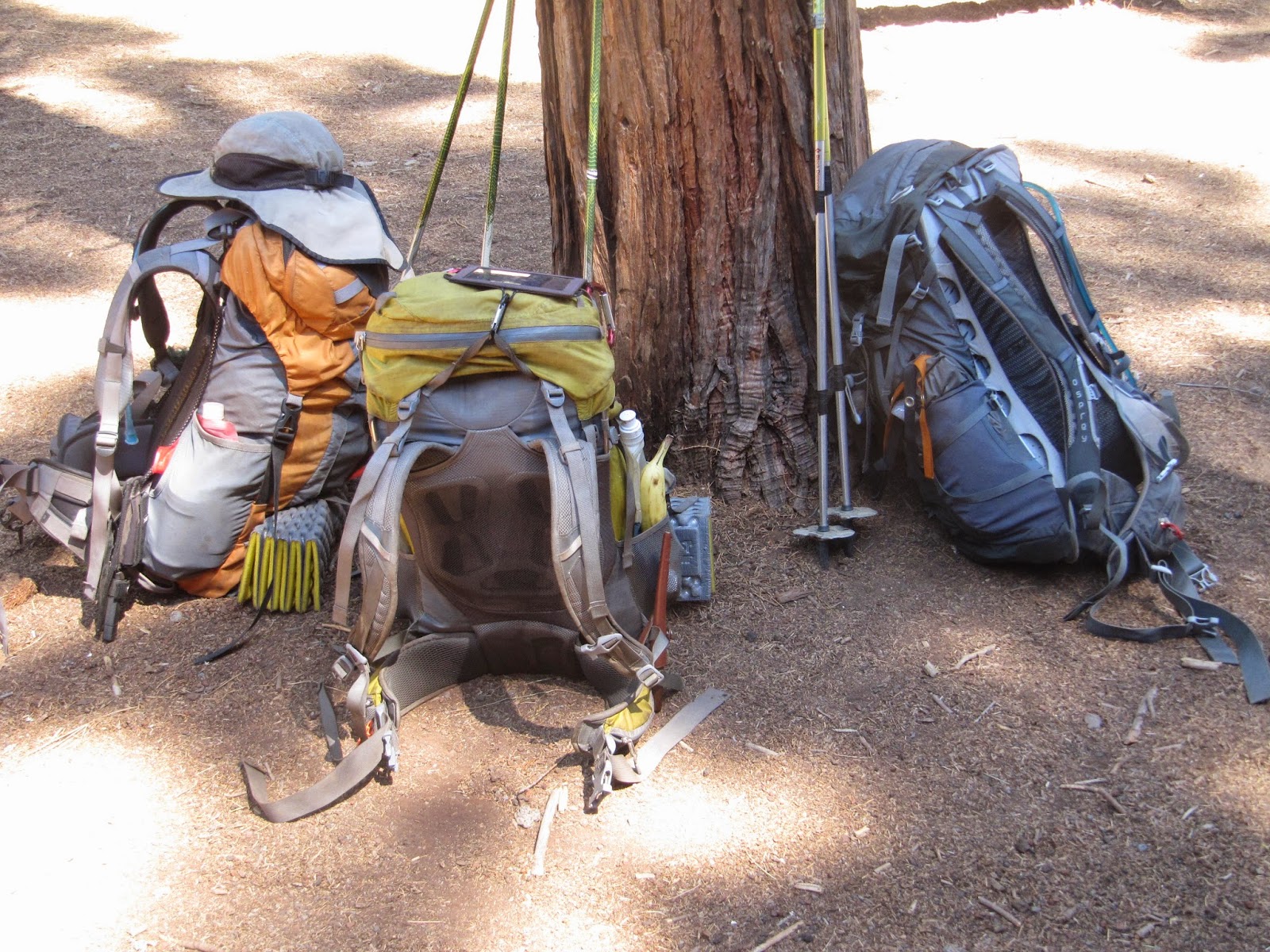 Hiker packs lying on the ground while the owners enjoy a round of cookies and milk. 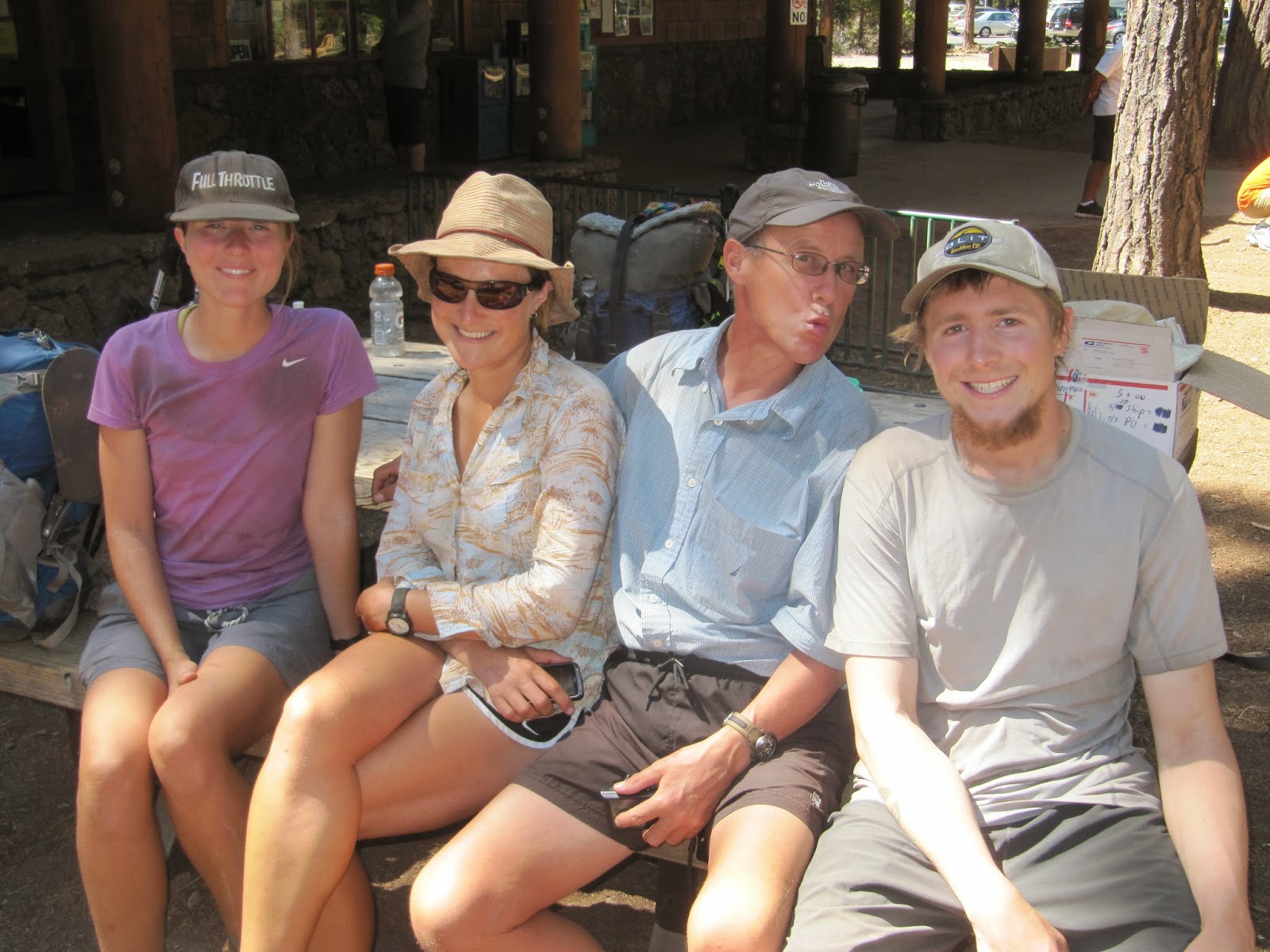 At the Burney Falls campground this morning was Pia, Clair, her husband Charlie and Sherpa C.