Even on the downhill descent, I couldn’t keep up with Commando; it frustrated me that I couldn’t walk at a pace equal to his.  I even tried to imitate his stride, and although he was not walking terribly fast, I still couldn’t match his pace, and before long, he was out of sight.  I dropped back to the pace that felt comfortable to me and gradually made my way down the mountain.  I know I should be happy that I’m even out here on the trail, that I’m making my mileage, that I haven’t sustained an injury and been forced to leave the trail, as has happened to several hikers I’m aware of.

At the bottom of the canyon, I passed over two sets of train tracks belonging to Western Pacific and a bit farther on the entrance to the Old Belden Campground that had been obliterated by a flood in 1986.  Yogi’s guidebook has a quote from a former thru-hiker who stated that Belden felt a little creepy.  With this thought in mind, I was anxious to enter Belden and see for myself what the place really felt and looked like.

As a side note, Belden, in its earliest days, was no more than a whistle-stop on the railroad line.  It had its beginnings in 1909 when Robert Belden was appointed as postmaster for the area.  The town, if it could be called such, was just a wide spot beside the river that could only be reached by a bridge that spanned the Feather River.  Robert started the construction of a saloon and store, and eventually a three-story hotel during the time the railroad was being constructed through the Feather River Canyon.  It eventually became a favorite stop for fishermen from the San Francisco Bay area.

Rave concerts are a bit different, to say the least, and concertgoers could easily be profiled as really free spirits, who tend to “push the envelope,” in terms of what they can get away with, specifically drug use; for this reason, in some countries and cities, they are illegal, which tended to promote a veil of secrecy as to the location of the event.  Rave concerts are distinguished by mechanical music – disc jockeys spinning/playing music versus live performances with bands, laser light shows, projected images, visual effects and smoke machines, and if one were to describe a typical rave participant - using such words as frenzy and madness, and a feeling of never wanting the party to end, would not be inappropriate.

The bar/restaurant was the main building on the property and was surrounded by rental cabins.  A lawn off to one side of the restaurant contained teepees that might have been rentals also, and at the far end of the road, closest to the bridge were several large buildings, one of which was a school and the other may have been a car garage in its day.

Approaching the entrance to the restaurant, I saw a number of backpacks sitting on the ground, which told me the place was full of smelly hikers.  Adjacent to the doorway, sitting on benches were two brothers from Florida – eighteen-year-old Strider and his twenty-one-year-old brother, Frodo.  These two fellows are quiet and keep to themselves; they didn’t freely interact with other hikers.

I set my pack down beside the others and attached my trekking poles to my pack, just to keep track of them, and entered the “creepy” Belden Town Resort.  Inside, against the patio window, were tables around which sat five hikers; outside on the patio are others, and all are eating breakfast.  I noticed an empty chair next to Runs with Elk and pulled up beside her.  She explained the menu to me and I placed an order with the waiter.

While I waited for my meal, I observed my surroundings.  There was a long bar behind me with bar stools that were scuffed and well worn, an open space for dancers, a stone fireplace with lounge chairs in front of it, and a pool table adjacent to the dance floor.  To my right was another room for restaurant diners, while the opposite end of the building contained a small convenience store, with supplies mostly geared for fishermen and campers, but there was also Gatorade, ice cream, and other assorted hiker junk food.

My overall impression of Belden was that it’s not “creepy,” and I was thinking I would petition the author of the guidebook to remove the reference to Belden as being so.  If I were traveling through the area, I would definitely rent a cabin or stay in the campground, but probably not on a weekend when the place was a hoppin’ and a jivin’ to the sound of grunge and punk rock.

As I was leaving the establishment, a large group of motorcycle riders come roaring across the bridge and parked their big Harleys in front of the restaurant.  They were from the big city to the west and were stopping at the Belden Town Resort for a bit of lunch.

When Jodie, our friends, the Cutlers, and I were here two weeks ago and left my resupply package with Brenda Braaten, she said to call her when I arrived in town and she would come and pick me up.  She did this for hikers who had resupply packages at her place, as she felt it was too dangerous for hikers to walk the road to her place, which was only a mile up the canyon road.  After crossing the bridge and looking at the road, I could see her point; the pavement went right by the guard rail.

Vehicles had the right-of-way to the entire width of the pavement, leaving no room for roadwalkers. These were the times when a cell phone was so invaluable.  I placed the call to Brenda, and within ten minutes, she was sitting beside me in her car.  She drove me to her place that she and her husband, Laurie, (yes, that’s her husband’s name) had named Little Haven.  The Braatens had been teachers in the Boston, Massachusetts area for twenty-five years.  When they decided to retire, they chose to come home to the Feather River Canyon, for Laurie had gone to school in the little schoolhouse in Belden. 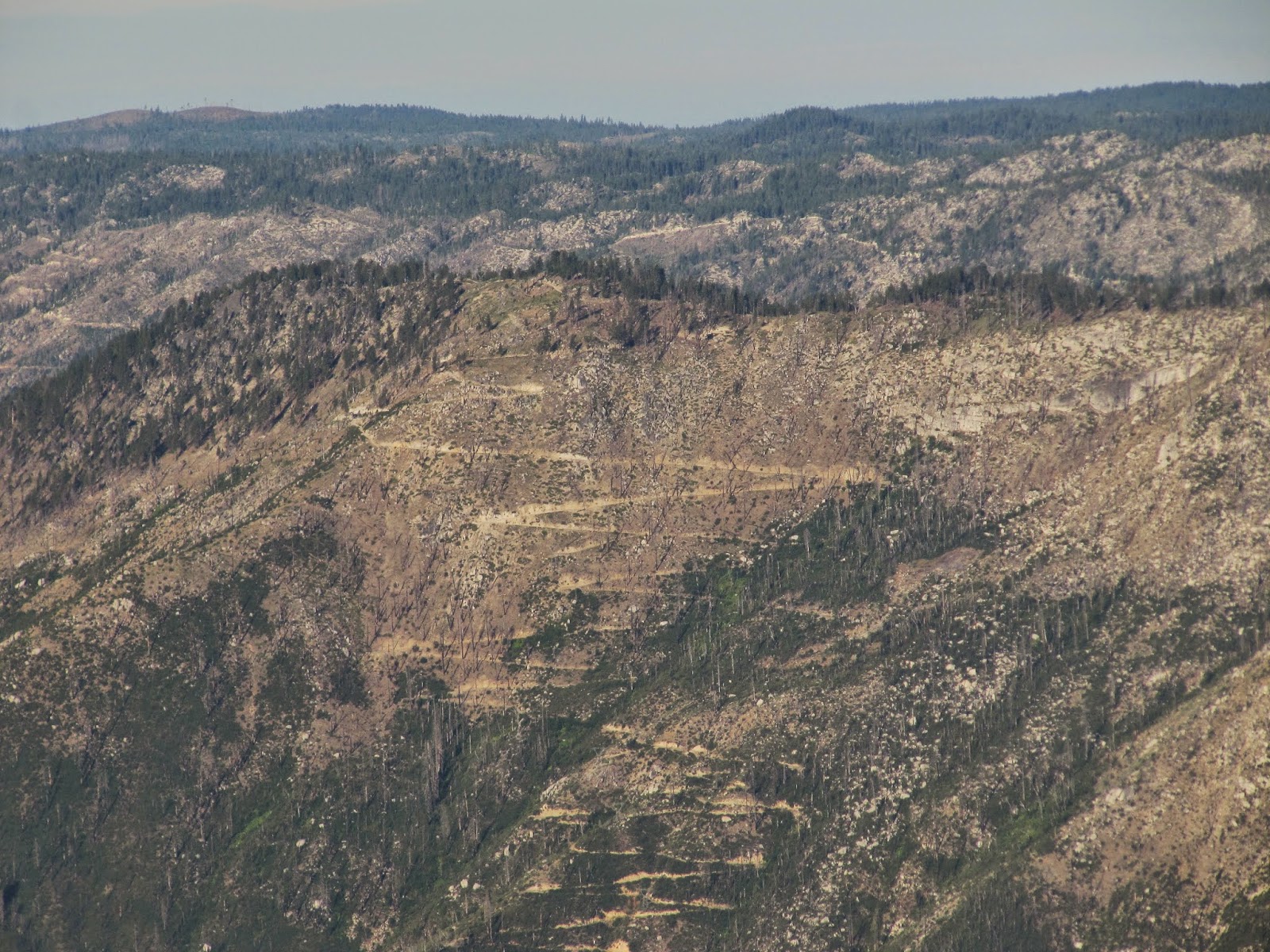 From our vantage point high on the mountain, Commando and I hoped that the switchback trail we could see across the way was the trail leading out of Belden, which meant that the climb out would be short and sweet. It wasn't. 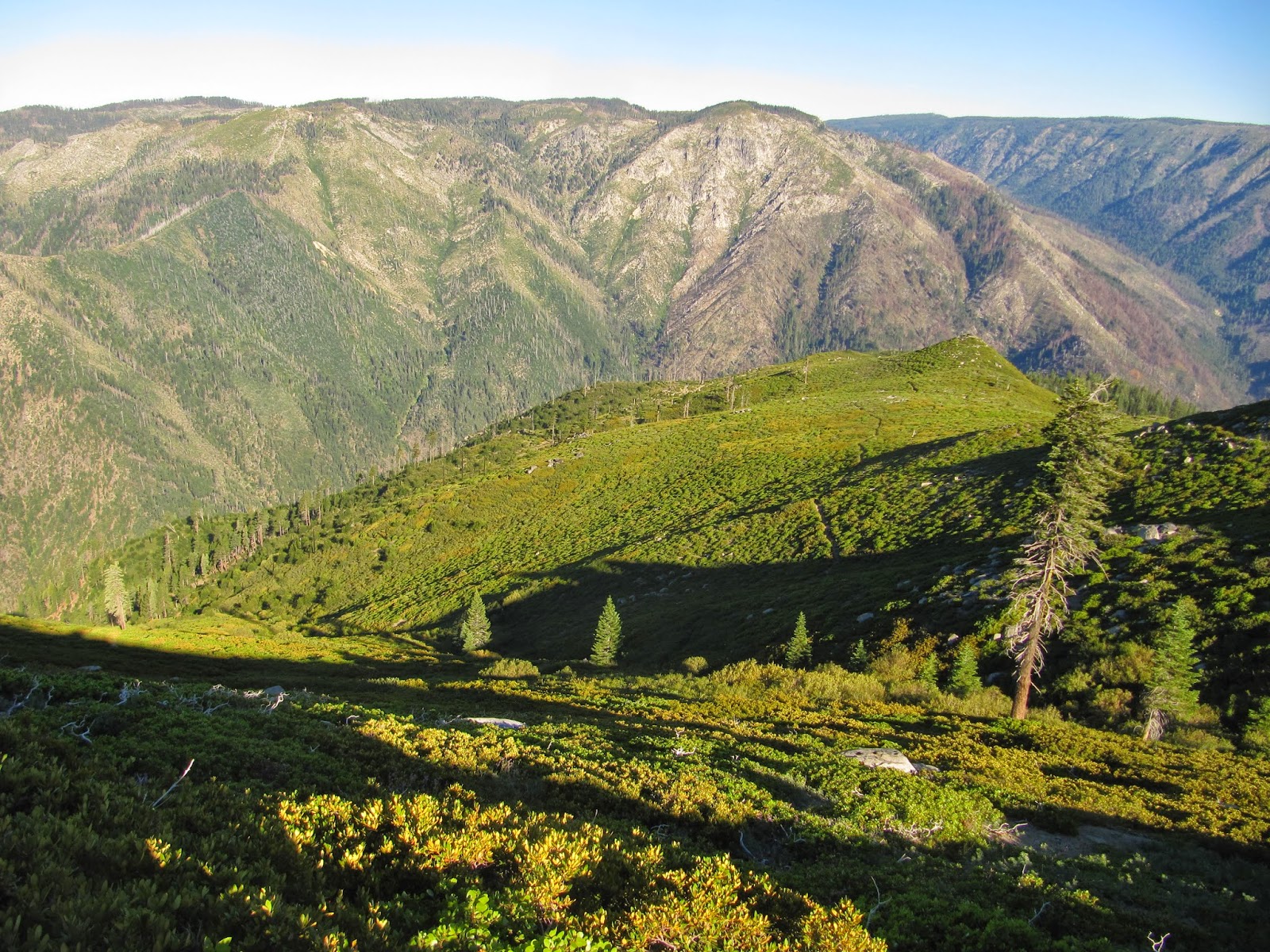 From here on the tops of the mountain, it was a 4,000' drop to the river and the entity called Belden. 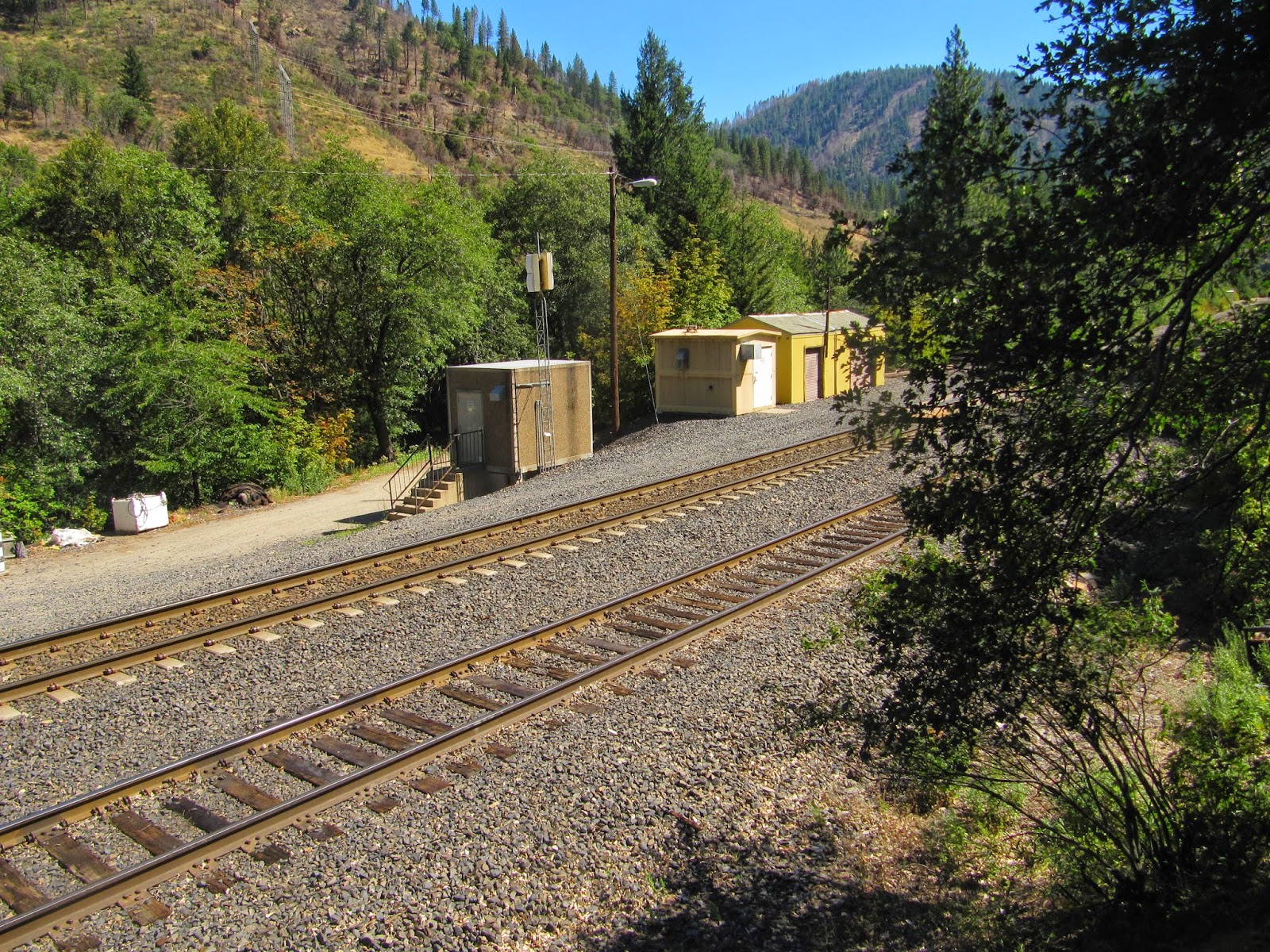 Belden owes its existence to the railroad. The campground and buildings comprising Belden lie just beyond the tracks and tall trees. The river and the train tracks are connected to Belden.