By early afternoon, the clouds that were sparse and widely separated this morning, had solidified into a mass of dark, grumpy thunderheads, spewing out raucous thunder and dazzling lightning bolts.  After the first few drops, the three of us realize that the rain was for real, and we stopped, dropped our packs, and dug into them to find our rain jackets and rain pants.  Of course, mine were on the very bottom of my pack and I had to pull everything out to get to them.

Runs-with-Elk was up the trail a little bit, but Cookie was beside me.  She had her rain gear on in a flash, while I’m still fumbling with mine.  To my astonishment, rather than walking on up the trail after she had donned her rain jacket and backpack, she waited for me while I put on my rain gear, sealed up my backpack and shouldered it.  Because it took time for me to locate my rain gear and put it on, I got soaked from the rain, which made me a little disgruntled.

The mere fact that Cookie waited for me, to ensure that I was okay with my gear, rather than taking off and leaving me to fend for myself, really impacted me.  She was considerate of me and my needs, and whether she knew it or not, the simple act of waiting for me to complete my task sent a message that said,

“I care about your welfare and want to make sure you’re okay before I move on up the trail.”
If she had headed on up the trail after putting on her rain gear, it would have sent the exact opposite message, something like,

For the rest of my journey, I reflected time and again upon this small, almost seemingly insignificant incident that I would refer to as, “She waited for me.”  The lesson I learned from this experience was that if I felt this much gratitude for such a small act of kindness, how could I pay it forward in order to enrich and touch with kindness the lives of others?  Thank you, Cookie, for an act of compassion you’re probably not even aware you participated in.

We walked for several hours in the on-again, off-again rain, and decided to camp around 5:00 p.m. after coming to a clearing beside a road junction.  We scattered, each looking for just the right place to set up our tent.  I moved away as far as I could, as I didn’t want to disturb the two when I got up in the morning.  The two girls would get on the trail between seven thirty and eight in the morning, but I would be up at four and long gone before they began to stir.

I thought I had left the beauty and the splendor of the Sierras behind, but the section of the trail I was now encountering in the Trinity Alps Wilderness and the Russian Wilderness would definitely qualify as a close second.  The mountains' ridges were high, and the trail builders, staying true to their mandate, kept the trail as close to the crest of the mountains as possible, thus affording spectacular views down long canyons, many of which were carved by glaciers.  The trail had long runouts along the sides of the mountains, and when it could go no farther, it crossed over a ridge and continued on the other side.  The mountain slopes were steep and canyons that were eroding towards the crest of the mountains were steeper still.

There was little evidence to suggest the presence of volcanoes, as these mountains were composed of granite just like the Sierras.  Often, the only way to build the trail through these mountains was by blasting through solid rock, and then stacking the debris to form a level platform on which to construct the trail.

The trail wound its way through boulder fields with rocks the size of automobiles along precipitous ledges, through forested slopes, across saddles and over crests, always seeking the high point to provide the hiker with the best scenic views.

Cookie and Runs-with-Elk passed me before mid-morning at a place where the trail sloped upward towards a high ridge.  As they climbed higher and higher, it became difficult to see them and eventually they were lost from view.  I gauged the time it would take me to reach the point where they had disappeared over the crest and guessed thirty minutes.  Upward I climbed, falling back on my true and trusted method for making big climbs – counting eight steps at a time, then repeating the same over and over again.  In the time I specified, I was at the crest and crossed over, only to find the two girls lounging on the trail having breakfast.  Pleased to have succeeded in making the long climb, I joined them for a well-earned rest and a breakfast of oatmeal.

From high on the mountain, we had an expansive view of the rugged terrain that lay before us – mountains and valleys and glacier-carved canyons – and somewhere in all that beauty was the Pacific Crest Trail.  We felt small and insignificant, yet we were thrilled to be privileged to visit and enjoy this unprecedented wilderness.

After our breakfast break, the three of us left together, but Cookie and Runs-with-Elk quickly outpaced me and I continued walking solo for the rest of the day.  Towards evening, Swiss Army caught up with me, and finding an established campsite in a boulder field close by a stream, we decided to make camp there.

After dinner, we visited for a while.  Swiss Army confided in me that this was his second year on the trail.  He had started at Campo last year - 2012, and hiked as far as Castle Crags before having to leave the trail.  Like me, he would always check in with his wife, but on this occasion, he wasn’t able to make contact with her.  He called friends and asked them to check on her; eventually, he received a phone call back with the disheartening news that she had passed away in her sleep.  He declared that he intended to go all the way to Canada this year, and I silently applauded him for his determination and tenacity in sticking to his goal, despite his significant loss.  I really liked Swiss Army; I found him to be gentle and kind, a man without guile; indeed, a man without an agenda. 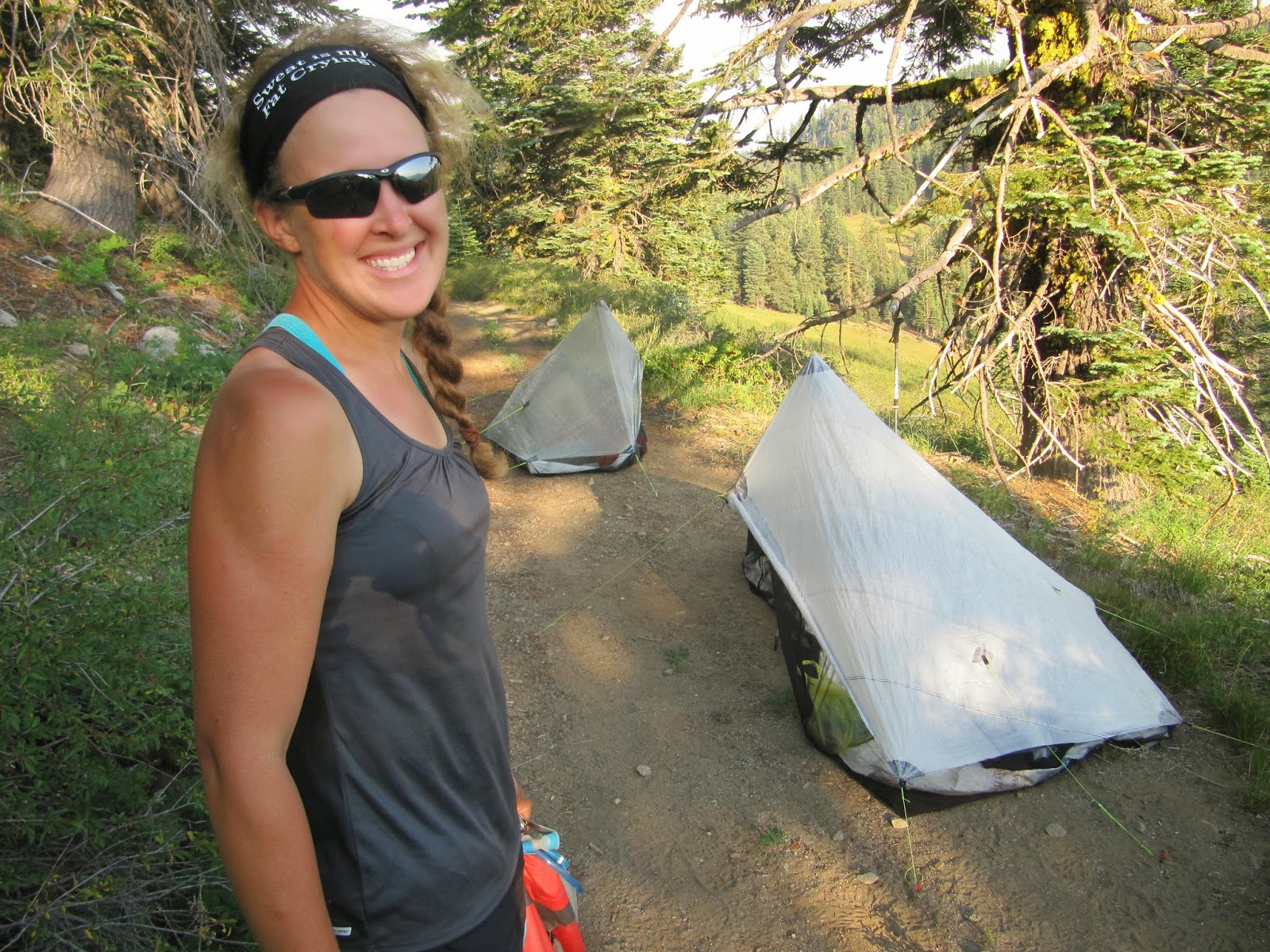 Cookie. She and Runs-with-Elk getting ready to strike their tents and get on the trail for the day.