Within ten miles, I approached a major trail junction at Windigo Pass.  The official PCT lay straight ahead while the older Oregon Skyline Trail veered off to the right.  Both arrived at the same destination  - Shelter Cove, but the Skyline Trail was many miles shorter.

When next I saw Storytime and Cookie, they were cooling their feet in the waters of Summit Lake.  I dropped my pack beside the trail and joined them.  We all concurred that this lake was undoubtedly the most scenic lake we had seen on the trail.  After taking pictures of one another and filling our water bottles, we moved on.  Within minutes, the two of them were out of sight.

There was a primitive campground and boat ramp around the lake from where we were sitting, and a dirt road that give access to the facilities.  Within a short distance, the trail crossed over this road and moved off into the trees, to parallel the road.

After crossing the road and following the trail into the trees, I suddenly become very weak, to the point that I had to sit down on the trail to regain my strength.  I had no idea what the problem was, but suspected I might be having a heart episode, however, checking my pulse, I found it close to normal.  I rested for a few minutes, then got to my feet and attempted to move on once again.  Almost immediately I felt wiped out and again sank to my knees and then to the ground where I sat and rested for a few minutes.  After this happened a third time, I opened my backpack to find my first-aid kit which contained my heart medication.  Of course the kit was on the very bottom of the pack, which required that I pull everything out of the pack and lay it on the ground.

After taking the medication, I stretched out on the ground to rest.  I prayed that no one would come by and see me sprawled on the trail with all my gear lying beside me.  They would undoubtedly think I had had a heart attack and would be terribly concerned not knowing what to do for me.  I fell asleep for ten or fifteen minutes, and when I awakened, I quickly repacked my pack and stood up on my feet to see what was going to happen.  Lucky for me, I finish packing my backpack just before a father and son passed by me.

This time, I was able to stand upright without falling down; I attributed my improved condition to the heart medication I took.  I decided to follow the road around the lake to where the PCT crossed it again in case I should need help.  At least if I were on the road, someone might find me.

The following morning, I found Storytime and Cookie just rising from their beds.  For the first time in a long time, they both had camped under the stars.  They immediately asked me if I had any water I could spare as they had used all of theirs in putting out a smoldering fire they found at the base of a tree.  How it started, they didn’t know, but they knew they couldn’t just walk on by and try and report it later.  As I always carried plenty of water, I was able to give them a full liter.  The maps said there was a stream just ahead on the trail, but Cookie said she walked quite a ways last evening, but couldn’t find it.

After leaving them, I encountered the stream just a short distance from where Cookie turned around last night.  Its source was the snowfields high up on the glaciated face of Diamond Peak.  As with most of the peaks in the Diamond Peak Wilderness area, Diamond Peak was an extinct volcano.  The large curved bowl of the mountain looked like the remains of a caldera through which the trail passed.

There were at least fifteen hikers at the resort, and I knew all of them.  I took my pack off and leaned it against the stone foundation of the store.  Beside it was the hiker box and I immediately started digging through it, looking for anything I could use to supplement my own meals.  I scored a few items and set them aside.

Shelter Cove was a beautiful resort with boating facilities, cabins to rent, and a large RV campground.  I had to walk through the campground to get to the resort store, and noticed there were a lot of late-model pickup trucks attached to good-sized fifth-wheel trailers, which equated to a lot of money tied up in just one truck and trailer.

The clerk at the counter retrieved my resupply box for me, and in exchange for five dollars gave me a handful of quarters for use at the coin-operated shower.  After taking a shower, I partnered with another hiker to share a load of laundry, and when it was finished, like always, I didn’t bother with the dryer, but put the clothes on damp and walked around while the sun dried them out.

It took about an hour to repack my backpack with the supplies from my resupply box, plus trying to stuff in the extras I scrounged from the hiker box.  I did the repacking on the spacious lawn in front of the lakefront.  Sitting next to me on the lawn was Sherpa C.  For shelter, he used a Big Agnes Copper Spur UltraLite1 tent.  I asked him to demonstrate it for me, as I wanted to see just how fast it could be erected.  At $370.00, it was an expensive tent, but were I to hike the trail again, this is the tent I would go with.  I liked the fact that it was freestanding, had double-side doors as opposed to entering and exiting through the front, and had a detachable rainfly, which would help considerably in reducing condensation which was a real deterrent with single-wall tents such as I was currently using.

In preparing for my trip, I let the weight of an item dictate whether it was purchased or not, as I was determined to go as light as possible and ounces added up to pounds.  It was for this reason that I went with the Rainbow Solo Tarp tent.  It weighed less than two pounds, whereas the Big Agnes Copper Spur UltraLite 1 weighed in at 2lbs 8 ounces.  In the end, I sacrificed a few ounces of weight for the comfort of a better quality tent.  This was not to demean the Rainbow Solo, but the difference between the two, on rainy or snowy days, was significant.  First and foremost on the trail, it was important to stay dry, and I couldn’t always achieve that with the Rainbow Solo. 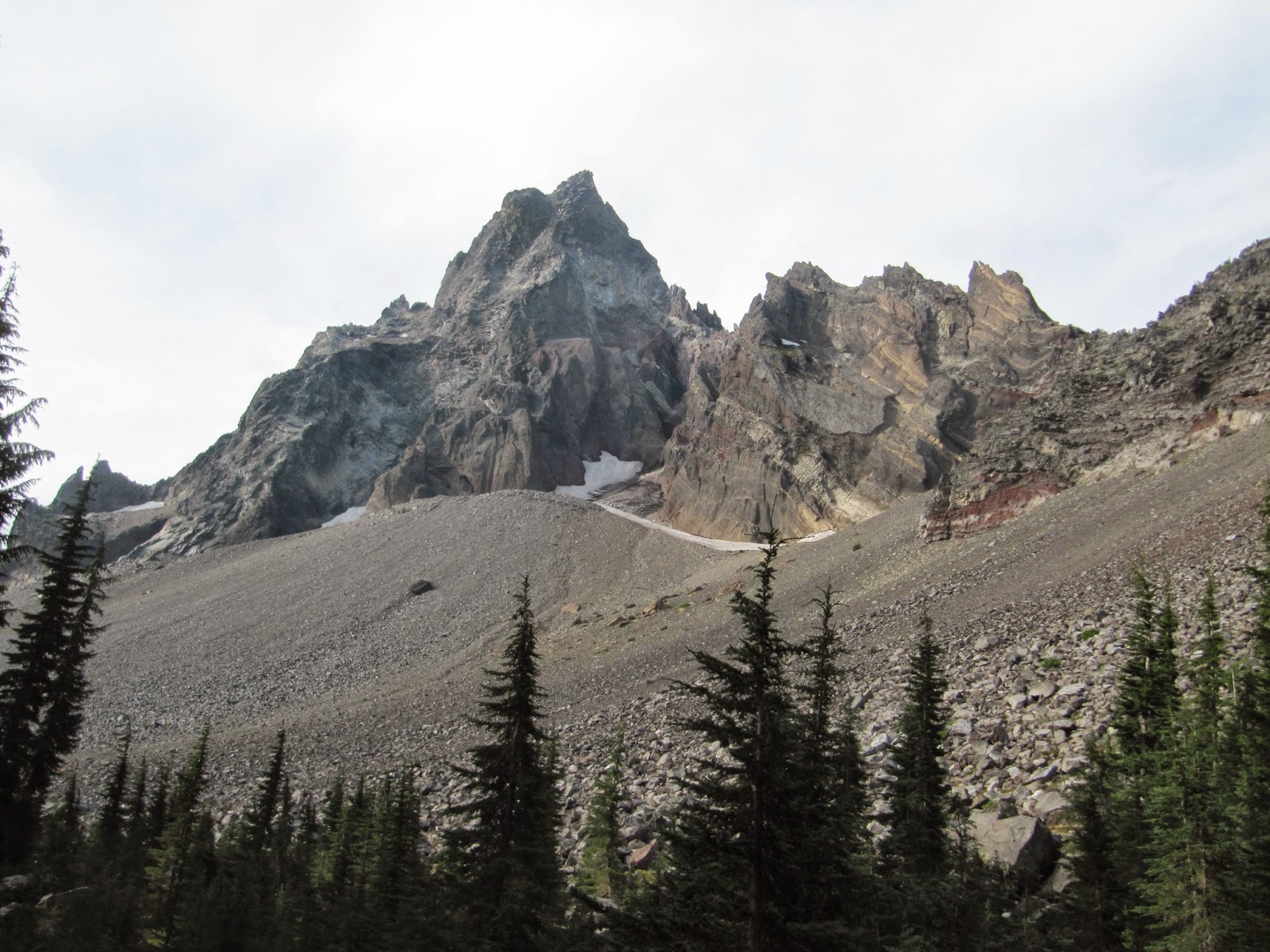 The rugged wilderness around Mount Theisel. The rock formation in the middle is the remnant of a volcanic plug - the hot, molten magma that formed in the throat of the volcano and solidified. Over time, because the matrix around the plug was softer, it weathered away, leaving only the plug. 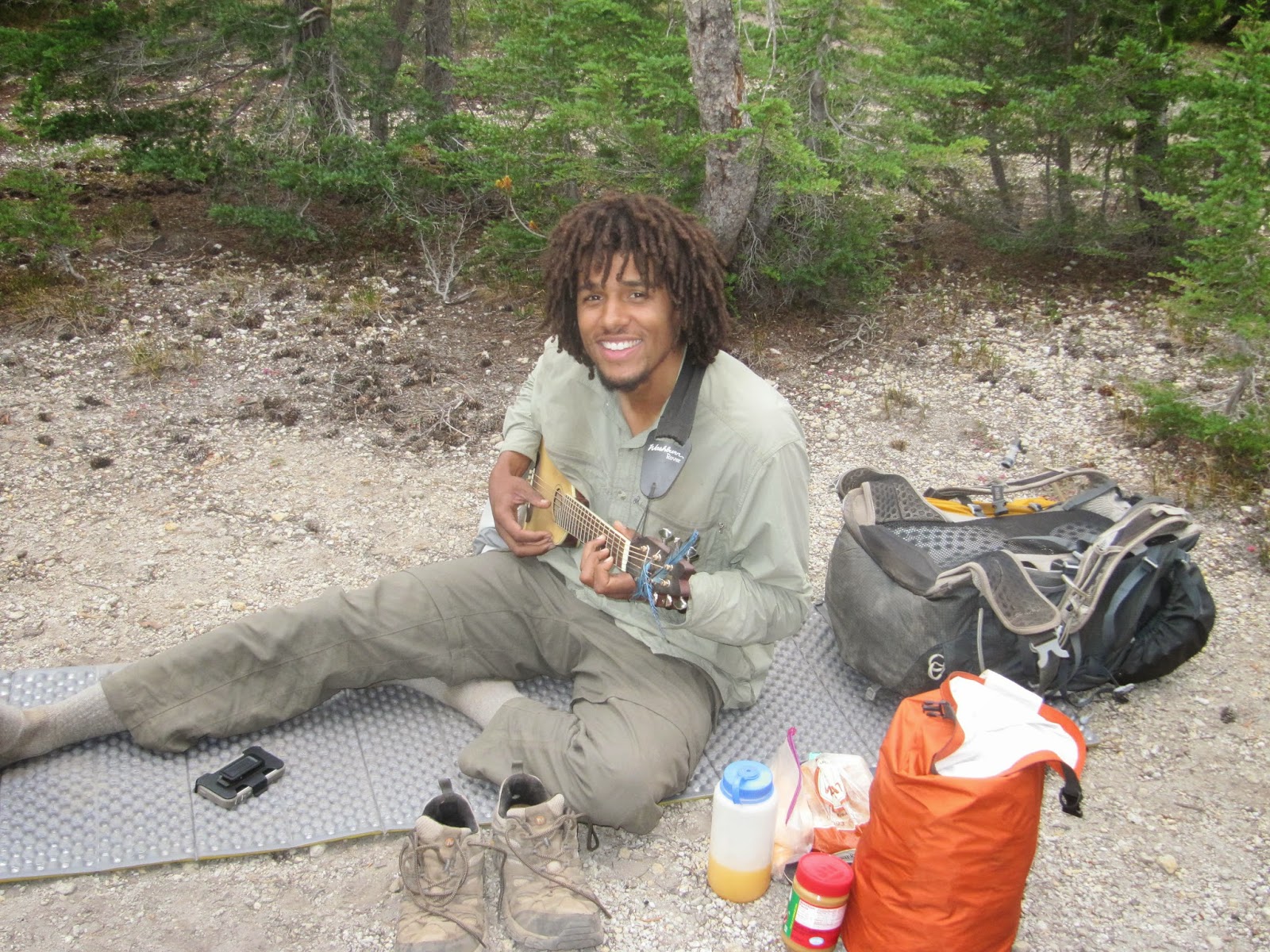 A young hiker with his miniature guitar. 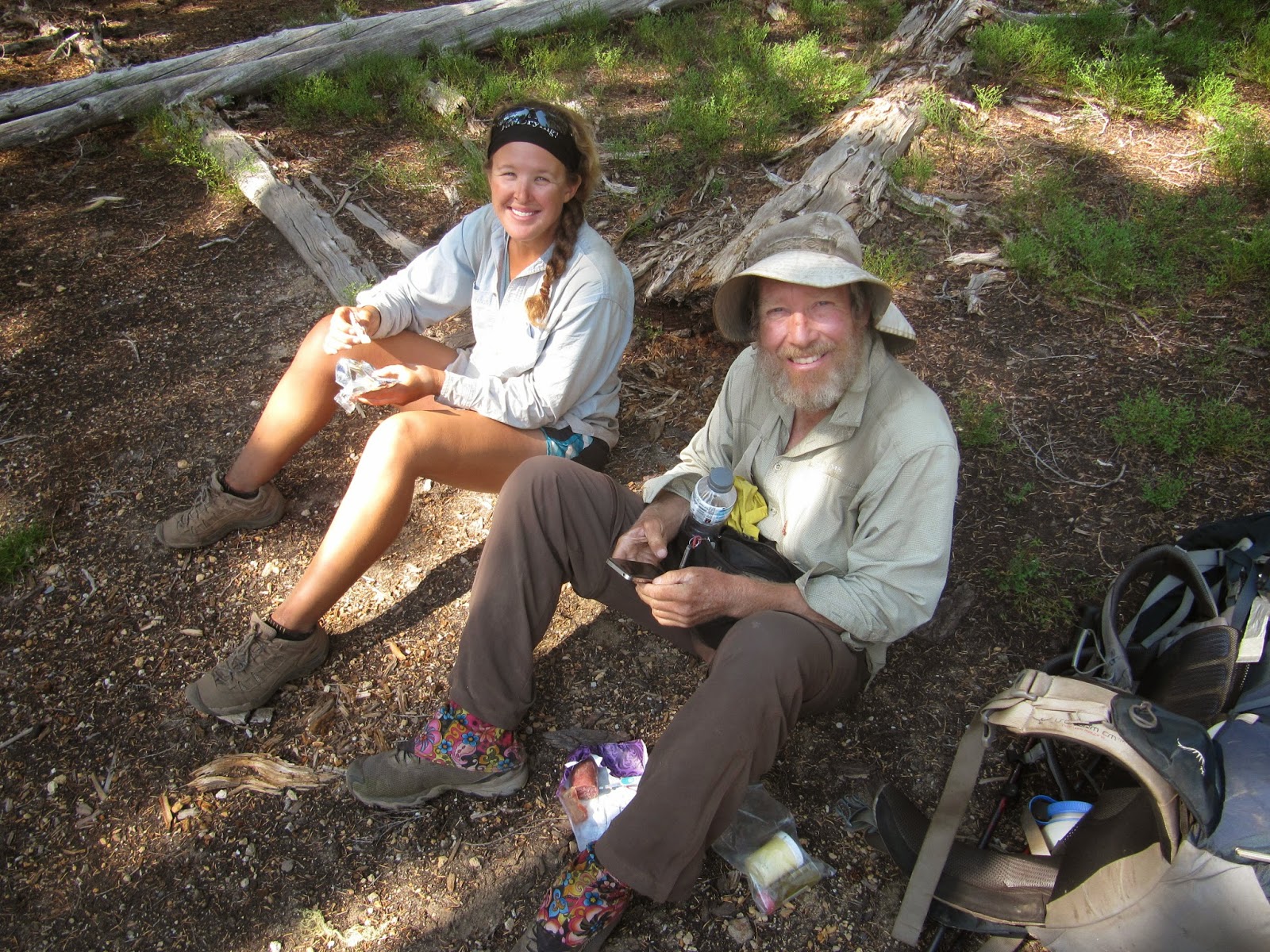 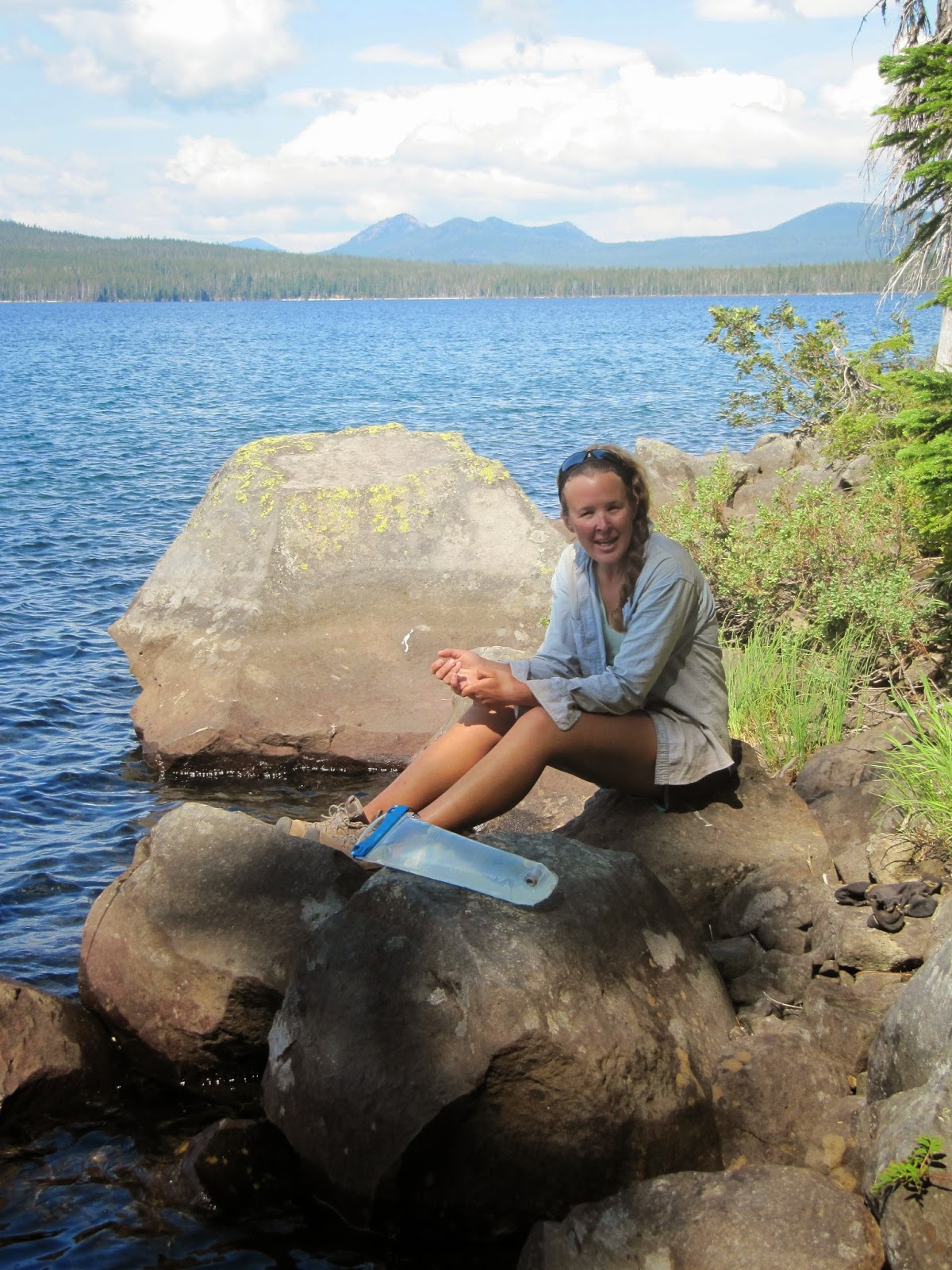 Story Time, Cookie and I all agreed that Summit Lake was the most scenic lake we had encountered on the trail. 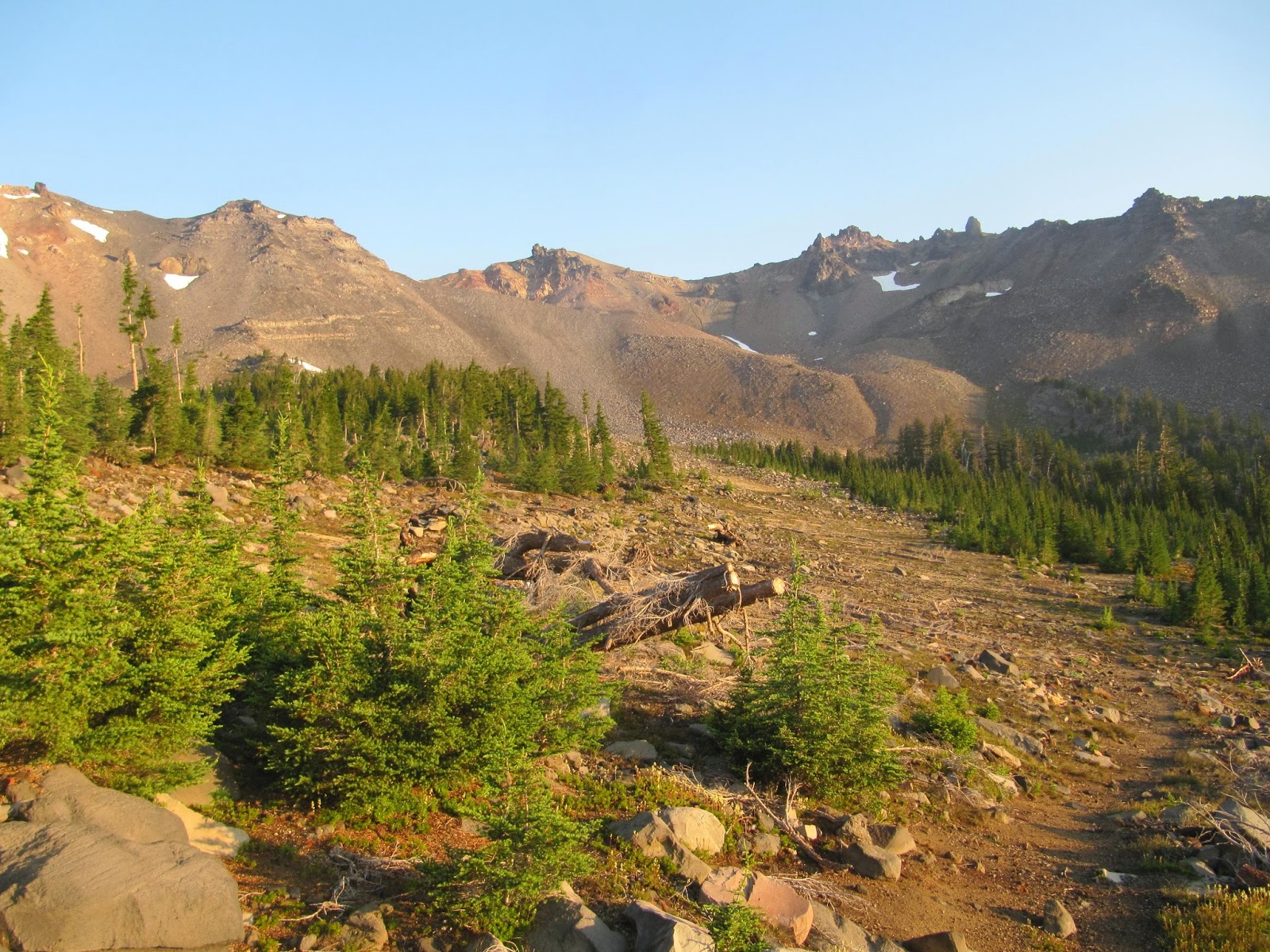 This is the Diamond Peak Wilderness. The trail makes a half circle around the base of this formation which appears to be the inside of a volcano caldera. 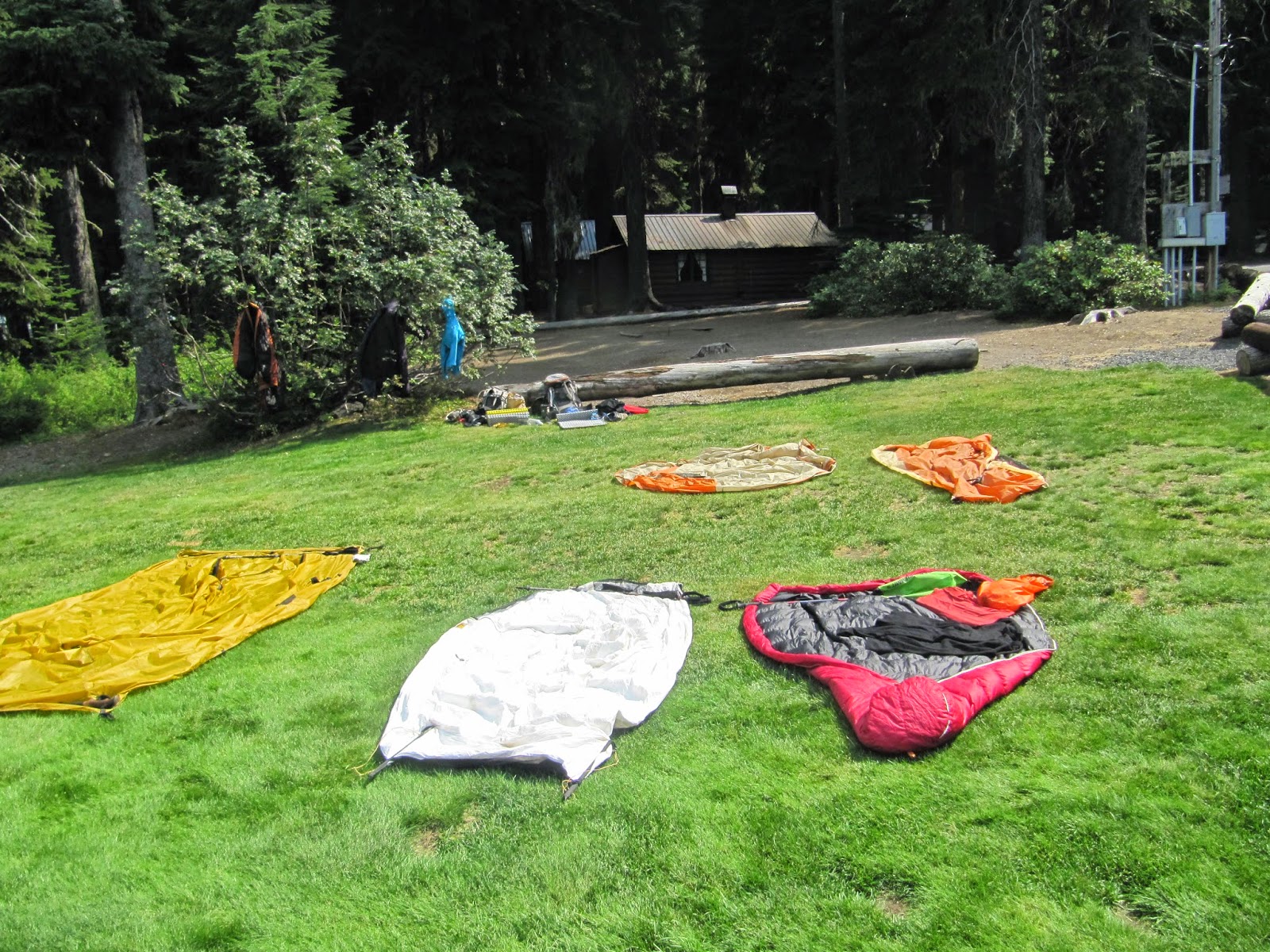 The lawn in front of Shelter Cove Resort. After showering and doing laundry, many hikers placed their tents and sleeping bags on the lawn to dry out. 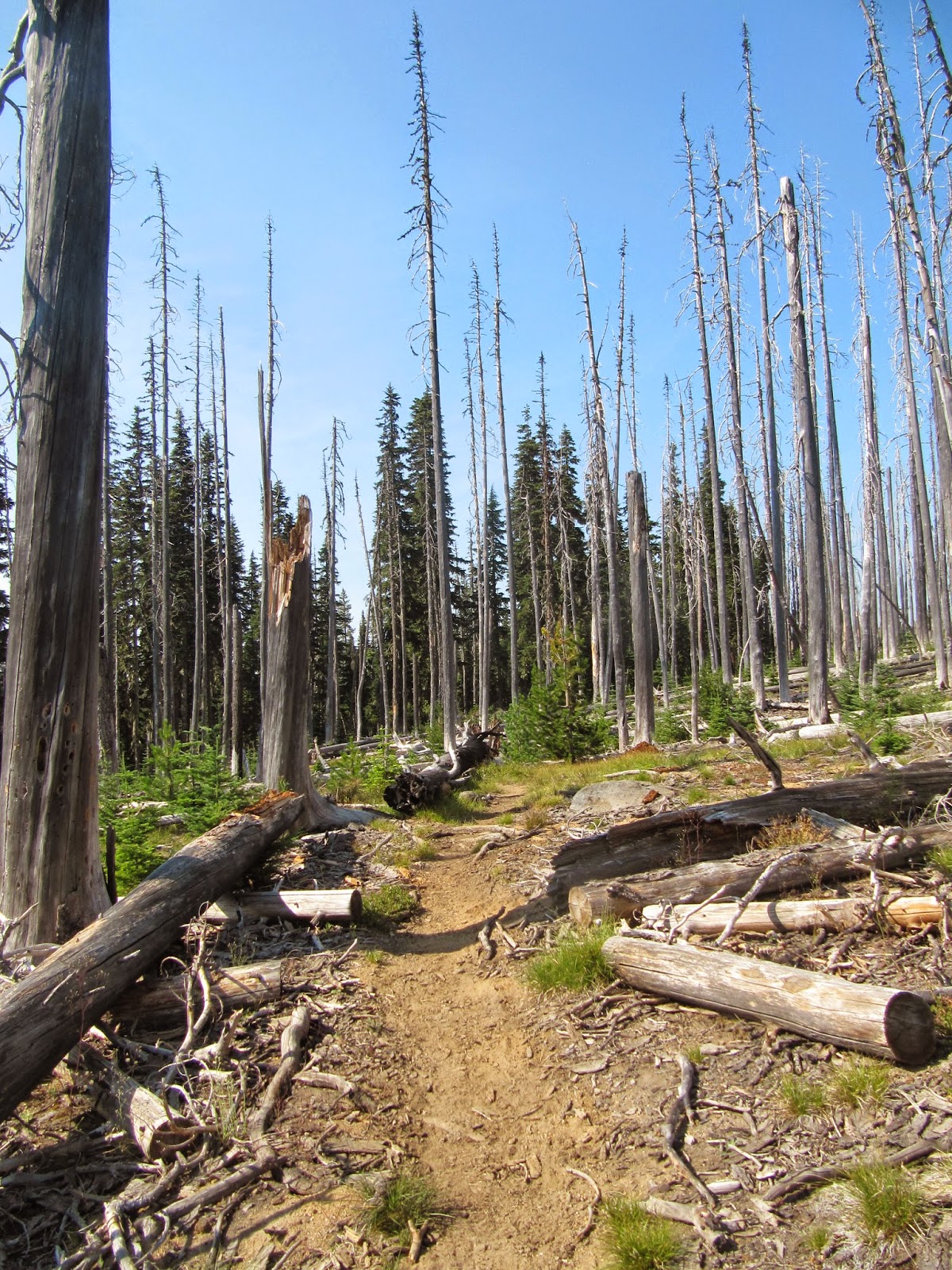 The dead trees are either from a long ago fire, or beetle kill. 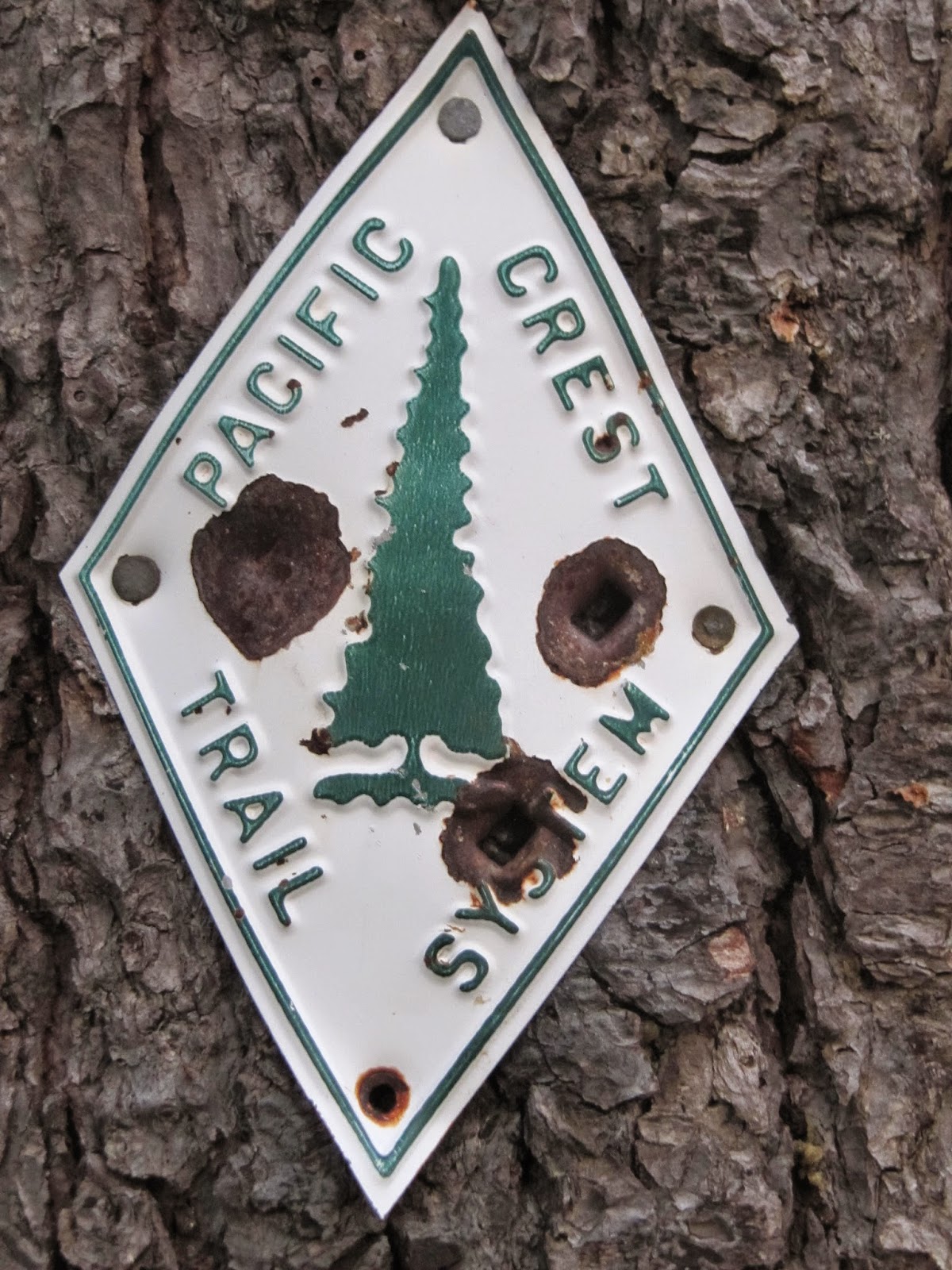 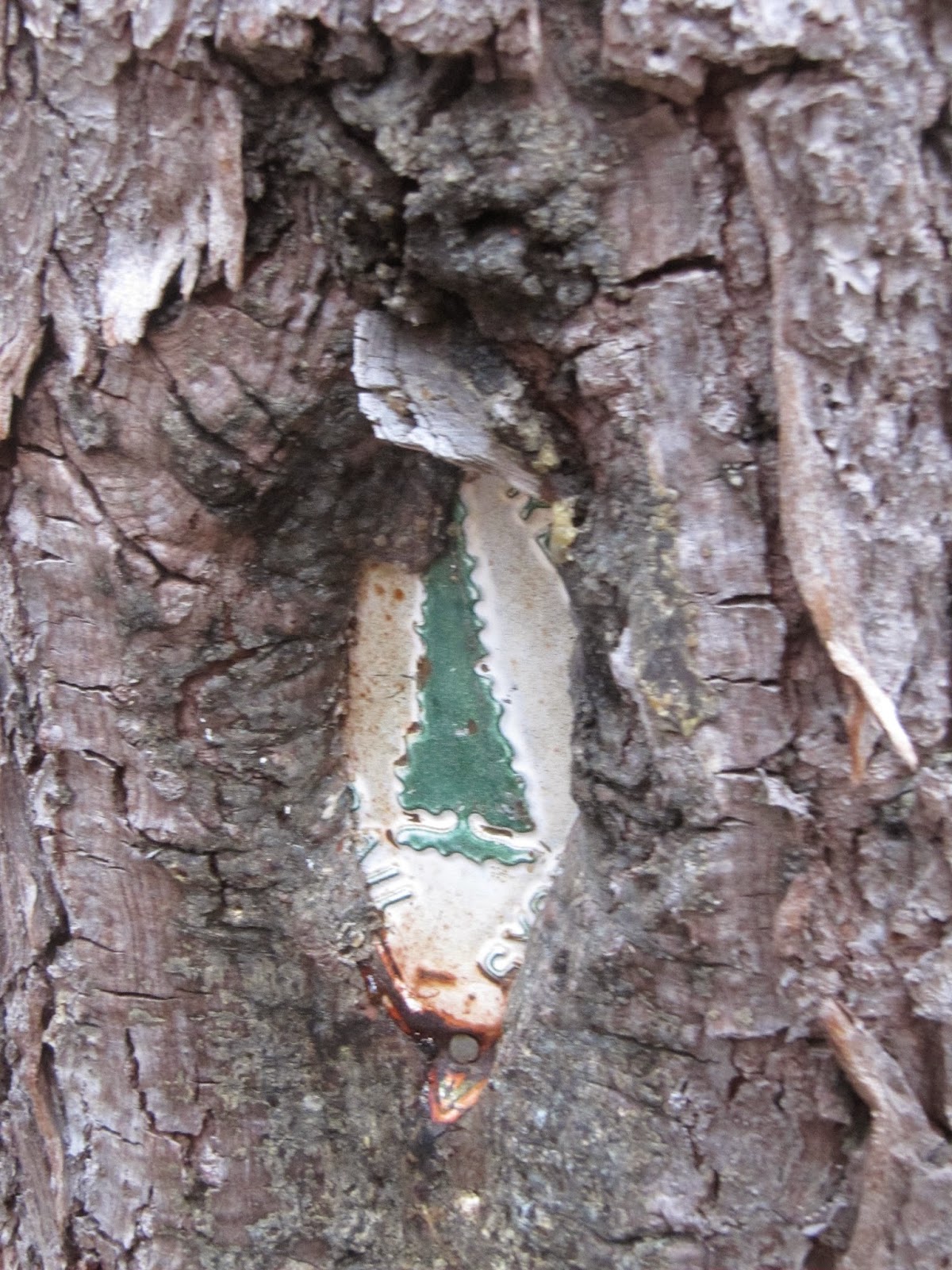 These two photos show several original Pacific Crest Trail logos tacked to the trees to mark the trail.
In times past, there were many more, but hikers have taken them as souvenirs.