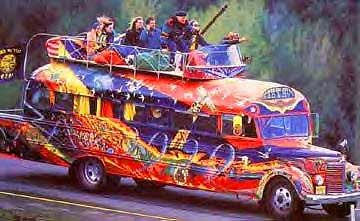 Ken Kesey and his Merry Pranksters heading for Washington, D.C. The bus with its psychedelic colors, and its occupants loudly proclaiming the merits of LSD were some of the hallmarks the defined the decades of the 1960s and '70s.