This was the American culture that produced the first residents to reside at the Black Bear Ranch Commune, originally lead and organized by Richard Marley and his wife, Elsa Collie Marley.

The ranch and surrounding land had once been the property of John Daggett, Lt. Governor of California during the gold rush days.  Because of his political connections, he was able to secure the services of three hundred Chinese indentured laborers to build a hair-raising nine-mile road from the one-store town at Sawyers Bar to the ranch and mine at the end of the road.

The ranch and mine, which consisted of eighty acres of forest lands, buildings, trout streams and verdant meadows, were for sale via the Big Sky Realty Company in Mount Shasta, California; asking price was $22,000, with a down payment of $2,200.  The money was raised by the Marleys from friends and associates, primarily in the movie industry, who sympathized with their ideas. (Coyote)

From its earliest beginnings, when there was little understanding of how to live off the land, when property was communal, and residents were discouraged from sleeping with the same person for two nights in a row, to avoid the stigmatism of appearing to be a couple, the commune, out of necessity for its own survival, evolved to a more structured organization, with rules and committees.

Membership in the commune was a revolving door; once accepted into the community, one may stay as long as one likes, but most move on after a season or two. However, once a communal member, a resident is always a communal member and reunions of alumni are held once a year at the time of the Summer Solstice – June 21.

I hoped Yashinka was able to make acquaintance with these latter-day adherents to the communal way of life and get the interview and photographs he so desired.

By 5:00a.m. I’m up and moving and, as usual, of the twenty or so hikers on the property, I was the only one doing so.  I wanted to go to breakfast, but it was a little too early; nevertheless, I found a suitable loaner bike and began my ride into town.  I rode slowly, taking the side streets through the community.  I liked to look at the homes, the yards, the architecture.

It was Monday, and there were only a few lights on in the homes I passed; I suspected that these would be homes that had children getting ready for school.  The smell from wood-burning fires lingered heavy in the air, adding a sense of comfort and coziness to the homes and families that were just waking up.  I found deer resting in the yards of several homes; they didn’t even bother to get up or try to move away as I peddled by.  I saluted them and whistled a tune as I glided by their resting places.

There was a Mormon church in town next to a major highway that was landscaped with extensive green lawns.  When we got the tour of the town yesterday from the shuttle driver, he indicated that several large bucks had taken up residency on the lawn.  The church was not out of my way to Bob’s Ranch House, so I swung by to see if I can see any.  No luck.

Dotty's Café was open, but I didn’t want fast food this morning; rather, I had my heart set on a large stack of pancakes piled high with warm butter and overflowing with maple syrup.  As I peddled into the parking lot of Bob’s place, I saw another bike parked beside the front of the restaurant.  Inside, I found Swiss Army sitting at the counter.  I inquired as to why he was here so early; he said when he awoke and found me gone, he assumed I’d gone to Bob’s place, and wanting breakfast himself, followed after me.

The post office didn’t open until 8:00 a.m., so having a little time to kill, I rode my bike around town.  At the far end of Main Street, I found a corner lot that was part junkyard and part used-car lot.  Assembled on the lot were several early model 1950s Chevy panel trucks with price tags in the windows that read, “For Sale – $5,000,” a few broken down, early model Mercedes, and most intriguing – a collection of aging Nash Ramblers and Nash Metropolitans. 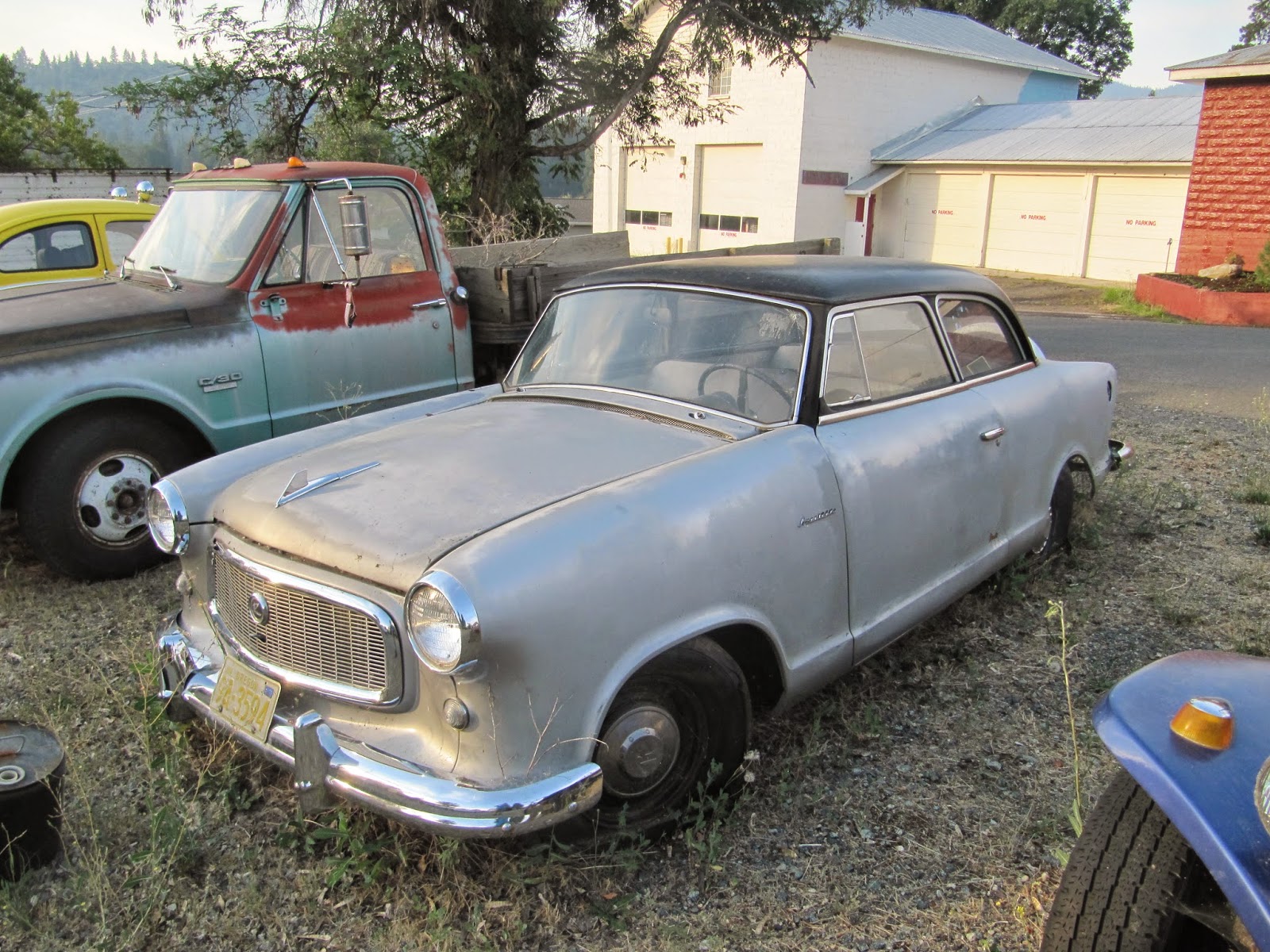 The iconic little Nash Rambler. There were four of them on the lot. 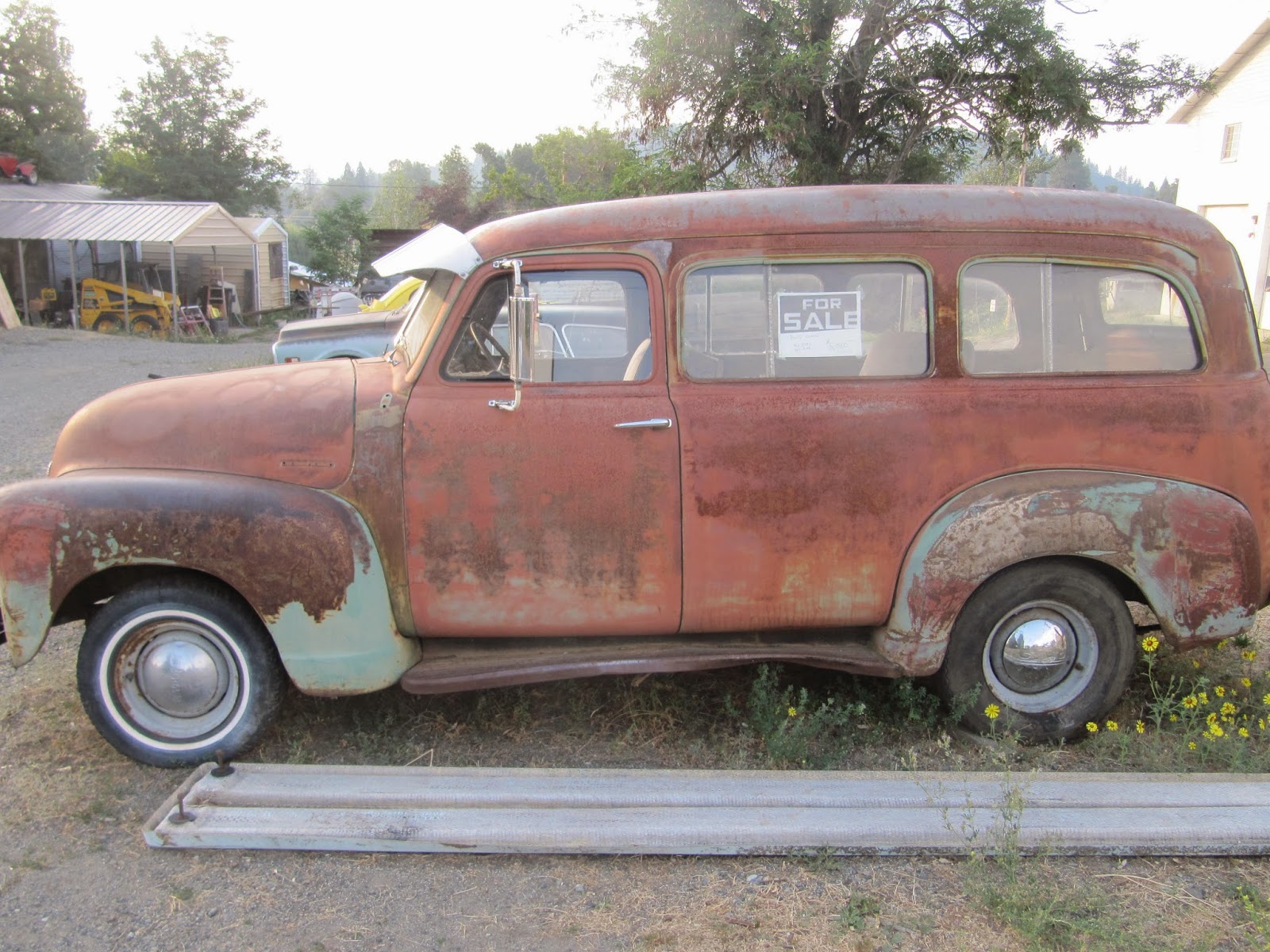 The Chevrolet panel trucks, that Dave says the owner paid about $200 for each. Asking price is not $5,000. 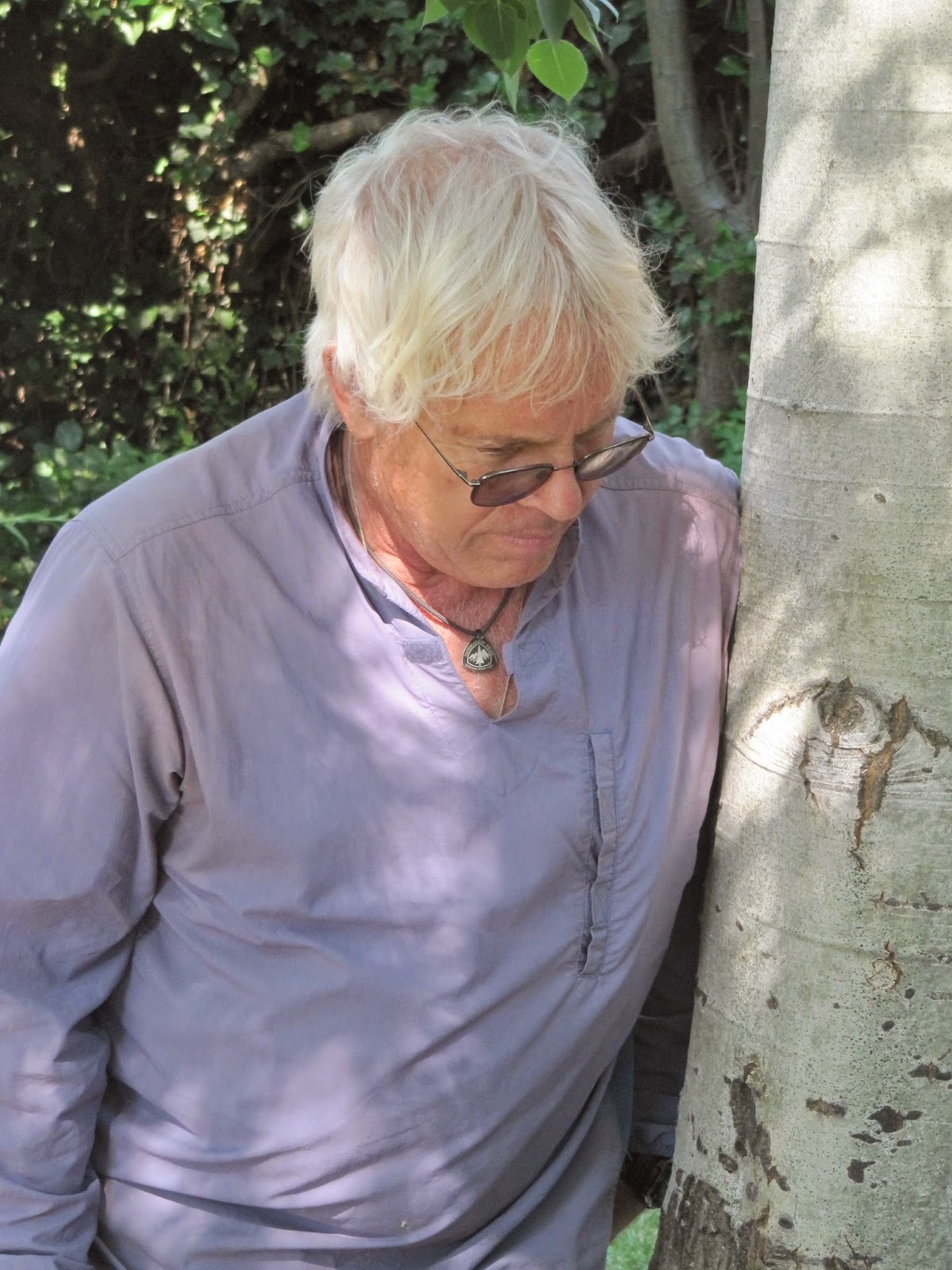 Swiss Army in a pensive moment. 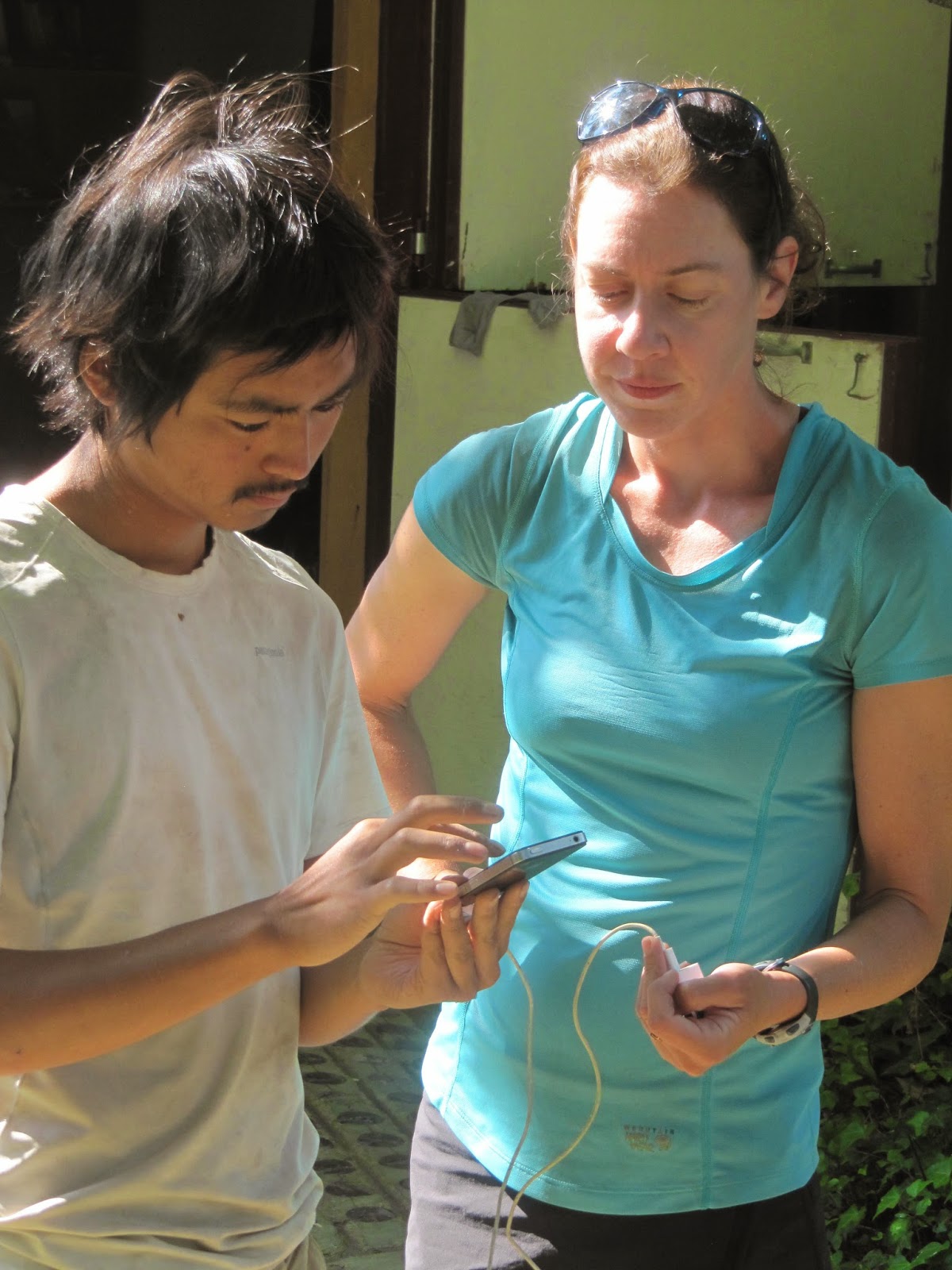 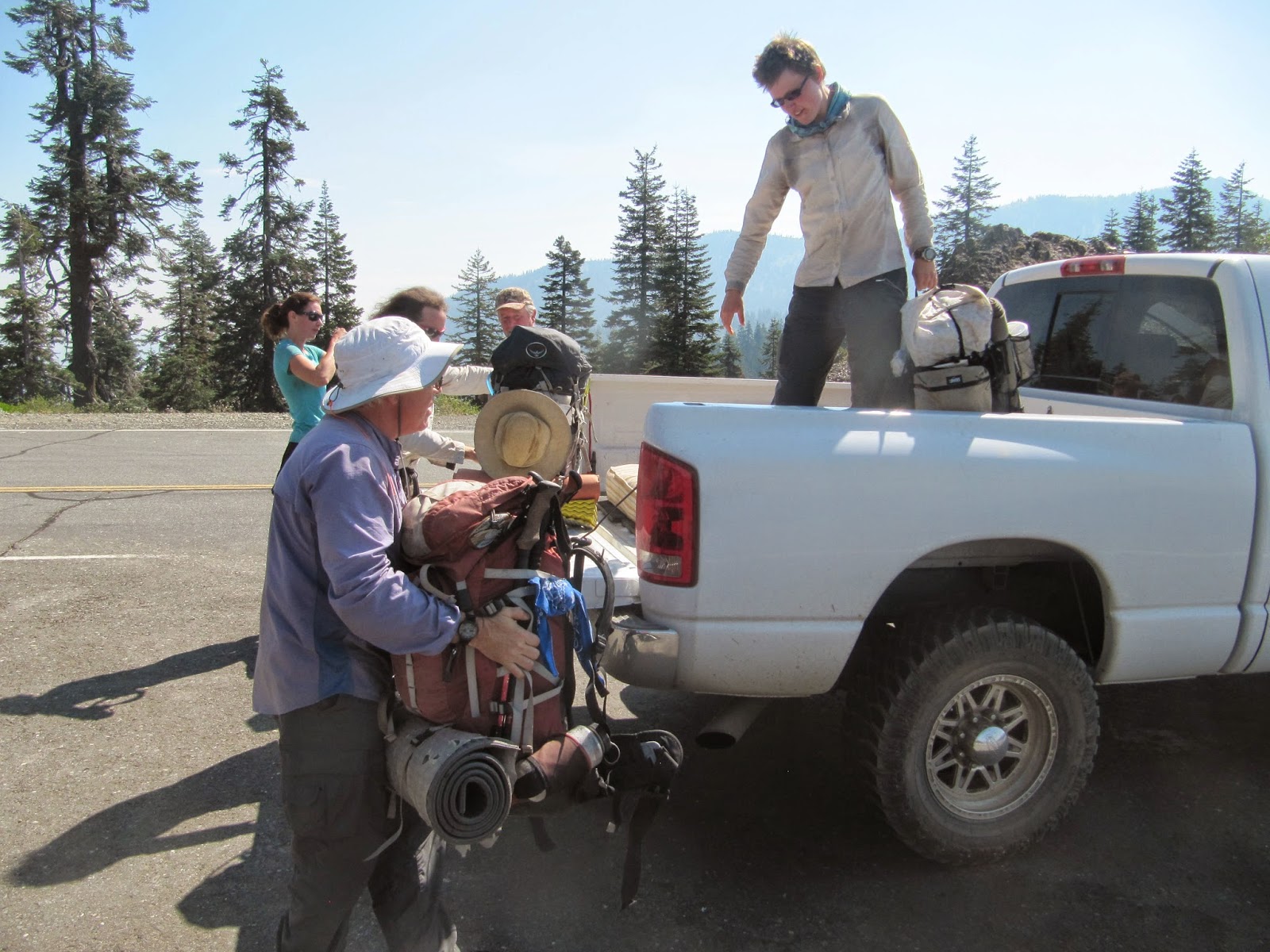 Hikers unloading their packs after taking the shuttle back to Etna Summit.