I found an empty place by the store wall, and set my pack on the ground, then entered the store looking for something to eat, as I was starved.  There was a self-help food bar with hot dogs and all the trimmings, plus a soda fountain.  Without waiting in line to pay (I did so afterwards), I made several Polish dogs and smothered them with relish and mustard, ketchup, and any other condiments that was available, and literally gulped them down.

The store was crowded with visitors who had come to see the lake; families with small kids who ran berserk around the store, grabbing at everything they could find; teenagers with cell phones pressed tight to their ears talking to their best friend who they couldn’t stand to be away from for even a few days.

When the crowd at the sales counter thinned, I approached the clerk and asked to reclaim my package.  The clerk scanned the entries in her three-ring binder, but didn’t find my name listed.  Once again, I made a call to Jodie to ask if she sent the package on time.  She said she had and the tracking number said it had arrived at the village.  Again, I asked the clerk to check her entry book, and she replied that the only Jones she had in the book was a Jodie Jones. Somehow my package was entered under Jodie’s name, but now the manager of the store, who went to retrieve the package, informed me that I couldn’t have it unless I could provide identification for Jodie Jones.  I hope the expression on my face conveyed to him my thoughts that screamed,

“Are you really that dumb?

Do you think I carry around identification for my wife?”

When the package was placed before me, the mailing label showed that it was sent to Richard Jones, and not Jodie, and I was able to retrieve my box without further hassle.

Somehow I always arrived at the next resupply point with leftover food packets.  This time was no exception.  I have snacks, Mountain House dinners, MiO drink flavoring, Clif Bars, etc., that I offered to the other hikers around me.  They in turn shared their extras with me.

Before leaving the village, Storytime, Brownie, and I walked over to the restaurant to partake of the all-you-can-eat salad buffet, which we all topped off with a chocolate sundae.

It was six in the evening and rain was threatening, but I chose to leave the village and hike a few miles before calling it quits for the day.  It was only five miles from Mazama Village to the rim of Crater Lake and its facilities, and I wanted to get there early to have breakfast at the café with others who left before me.

To return to the trail required a roadwalk of about a mile, and then it was an easy walk through the forest to the trail junction at Dutton Creek, where the trail to Crater Lake departed. There were several official campsites at Dutton Creek, and I had expected to see other hikers there, but there was no one around except for a group of noisy boy scouts who were camped around a bend.

I moved off the trail a few feet and cleared the debris from the ground to make a campsite.  I couldn’t believe how tired and exhausted I was feeling.  I had covered over 1,800 miles of trail so far, and yet had taken only four full days' time off for relaxation.  I knew I should take more, but I was straddled with that nagging feeling of making every day count, and wasting none.

The night’s rest was restorative and it was still dark when I left my campsite, but I didn’t have to use my headlamp to see the trail.  It was only two and a half miles to the lodge at the rim and I arrived at the cafe parking lot at 7:30 a.m., and was surprised to find the parking lot empty. I walked over to the front door of the café to see if their hours are posted, which they were, and found that the café didn’t open until 9:00 a.m.  Rats, I could have slept in this morning.

In the parking lot was a restroom, a really clean one, and I went in to refill my water bottles.  While waiting for the restaurant to open, I decided to eat an early breakfast of my own making which I did while sitting on the stone steps of the restroom.  With time to kill, I walked over to the lodge, thinking I might be able to get breakfast there.  But once in the lodge, I felt out of place; it looked to be a high-end establishment, therefore I assumed that breakfast in the dining hall would be overpriced.  However, in retrospect, after the café opened and I spent seventeen dollars on a sandwich, yogurt, and chocolate milk, more than likely, I could have enjoyed a decent breakfast here at the lodge for less money.

After walking away from the lodge, I should have just left and continued the walk around the lake, but the lure of cooked food at the café was too much to resist.  Finally, it was 9:00 a.m. and I and several others headed towards the café to take our place at a table and place an order for a large stack of pancakes.  I arrived at the cafe just in time to see Cookie approaching.

Once inside the café, we found that it was not a sit-down restaurant, but a way overpriced buffet of prepackaged snacks – sandwiches, fruit, drinks, yogurt, etc.  Trapped, and not wanting to go back to the lodge, I made my selections and sat at a table with Cookie.  I spent seventeen dollars; Cookie said she had to limit her selections to about twelve dollars.

At 9:30 a.m., the two of us left the café and started the walk around the lake.  Far in the distance, up high on a cliff, we could see a tiny mound that we knew to be the Watchman fire tower.  From our starting point, it was a four-mile walk to Watchman.

The fire lookout station was constructed in 1932 and manned continuously by park service personnel until 1977, and since then, only intermittently.  Because it offered a clear 360-degree, unobstructed view of Crater Lake and the surrounding terrain, it had become a favorite hiking destination for visitors to the park.  The lookout station was still manned by the park service, but it also served as a museum for the public. 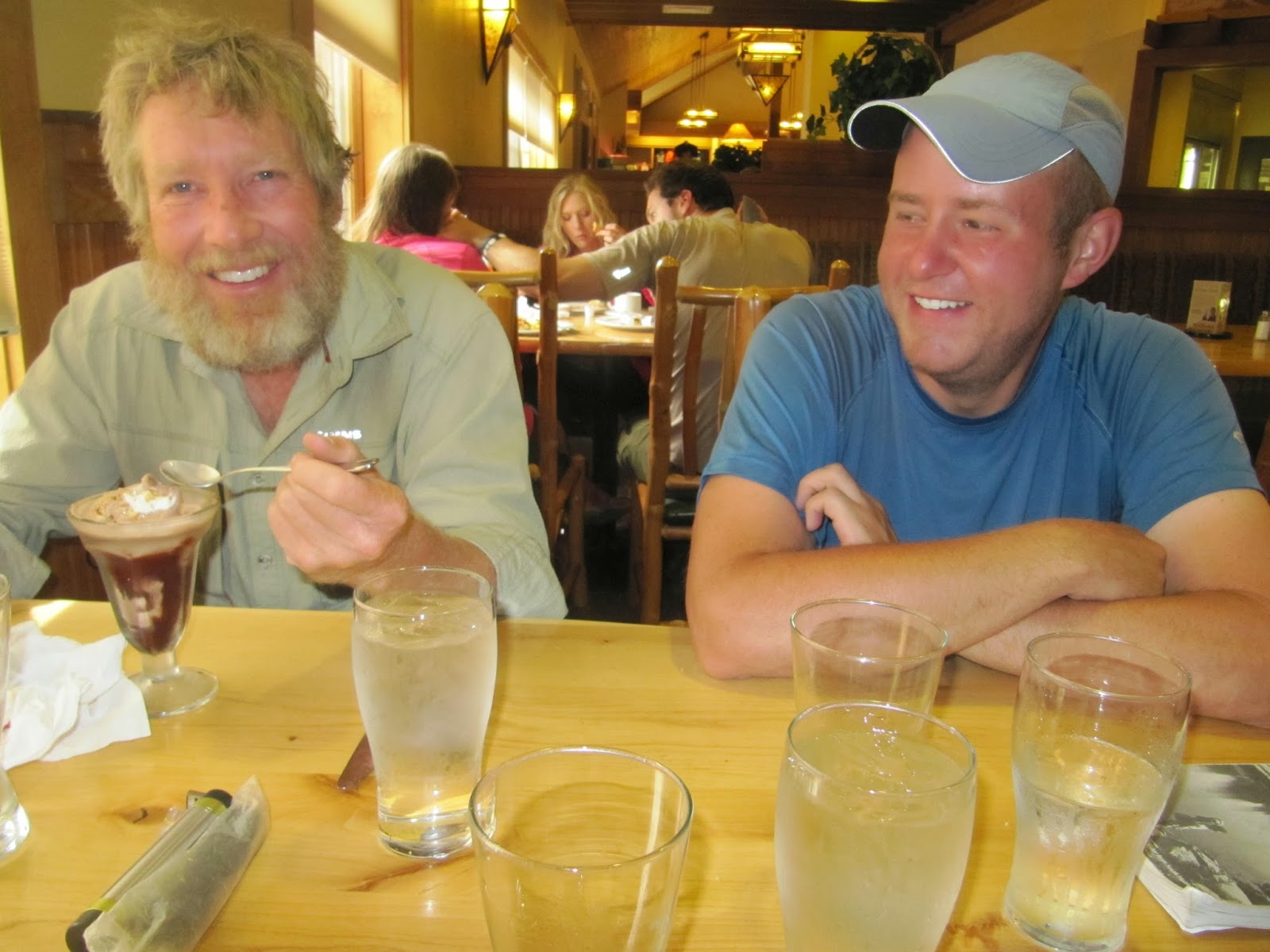 Before leaving Mazama Village, Story Time, Brownie and I enjoyed the all-you-eat-buffet at the restaurant.