Passing around the south ridge of Kangaroo Mountain, the very mountain I had seen several days before, the trail began to parallel a Jeep road that always stayed several hundred feet below me.  I believe the road led to a mine.  Shortly, the sound of a vehicle could be heard slowly making its way up the road and through the trees; I could see that it was a white, fifteen-passenger van.  As I walked, I watched it; its movement was slow and hesitant and then it stopped.

The doors opened and two men stepped out of the van.  They looked at it, as if somehow it had betrayed them and then they moved to the rear of the vehicle and begin trying to push it, but it didn’t move.  I watched awhile as they continue to fiddle with the van; from my perch high above the road, my impression was that the van was stuck; perhaps the back wheel on the driver’s side has slipped off the road.

Whoever they were, they were a long way from home; I was willing to go and help them, but the trail never did descend to the vicinity of the road; it stayed high above it.

From my viewpoint on the trail, overlooking the road and the stalled van, I could see that the trail began a gradual descent, which would continue all the way to Cook and Green Pass, my next water source.  I continued on, past the van and the two men struggling to make the van do whatever it was they wanted it to do, and through forests that had been burned from a fire dating back to 1987.

The Cook and Green Pass was a major intersection for Forest Service roads in this area, and it kind of reminded me of a freeway spaghetti bowl; as I approached the pass, I saw that a large camp has been set up beside the road, one that would be suitable for at least a dozen people.  The main tent was a large geodesic North Face tent and scattered around it were packs, cooking stoves, and other paraphernalia associated with camping.  Seeing the camp here made me think that the white van I saw from the trail might be associated with this group. I approached the tent and yelled out,

Moments later, the tent flap opened and a young girl stepped out.  I started to tell her about the two men and their white van, and wanted to know if it belonged to her group. However, she was not an American, but French, and I had a tough time understanding her English.  After all was said and done, and after I had obtained water from the spring and started to move on up the trail, I still never figured out why the girl or her group were camped here, or if the white van did, indeed, belong to the group.  But, I did the best I could to obtain help for the two men and their cantankerous vehicle, and moved on.  I camped for the evening at mile 1,689, having made twenty-five miles for the day. 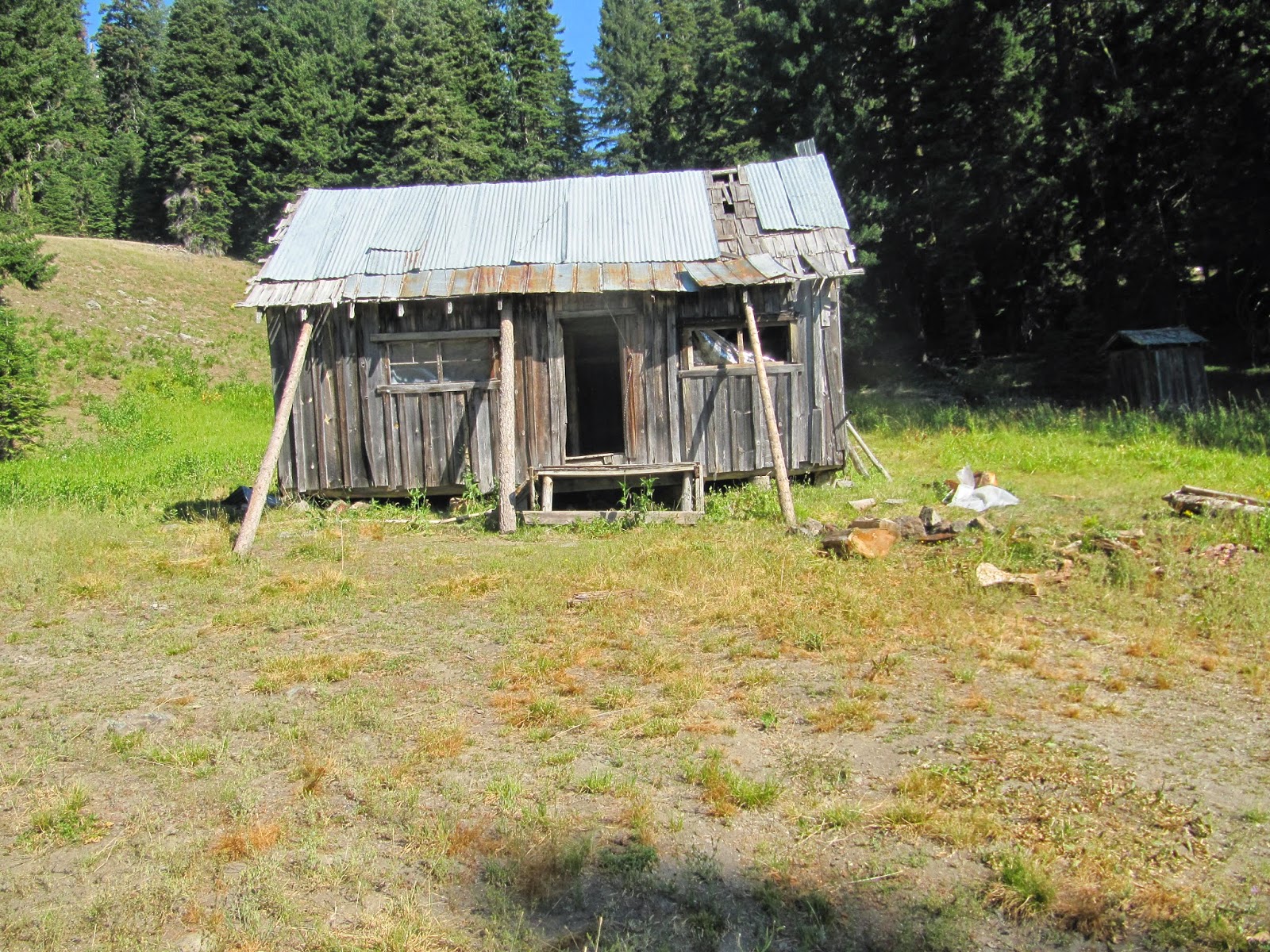 Somewhere along the trail, I came across this dilapidated cabin. The guide book said that at times, when the owner is around, he'll invite hikers to stay the night. From the looks of the inside of the cabin, the owner hasn't been around for a long time. 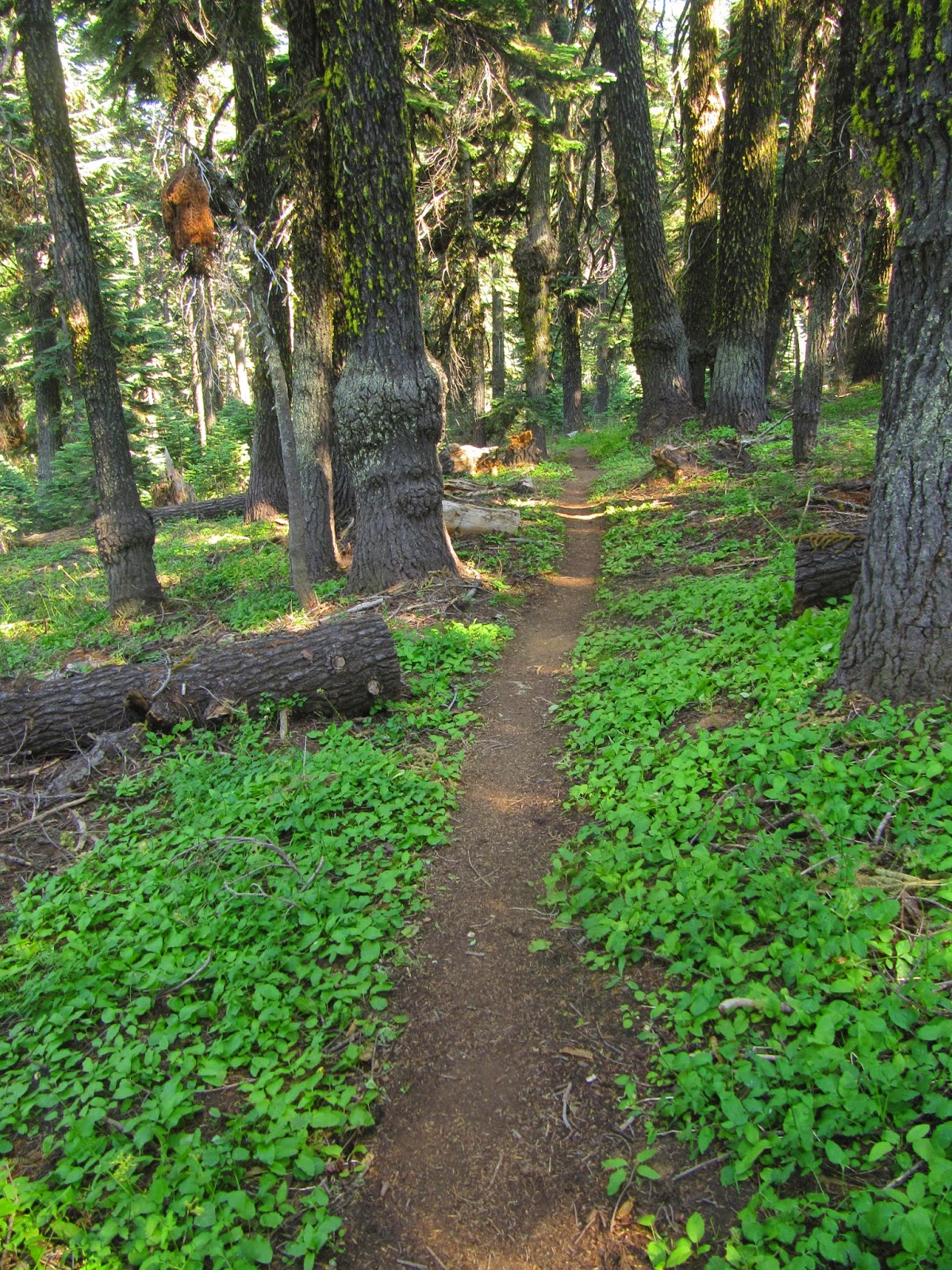 Where the trail meanders. 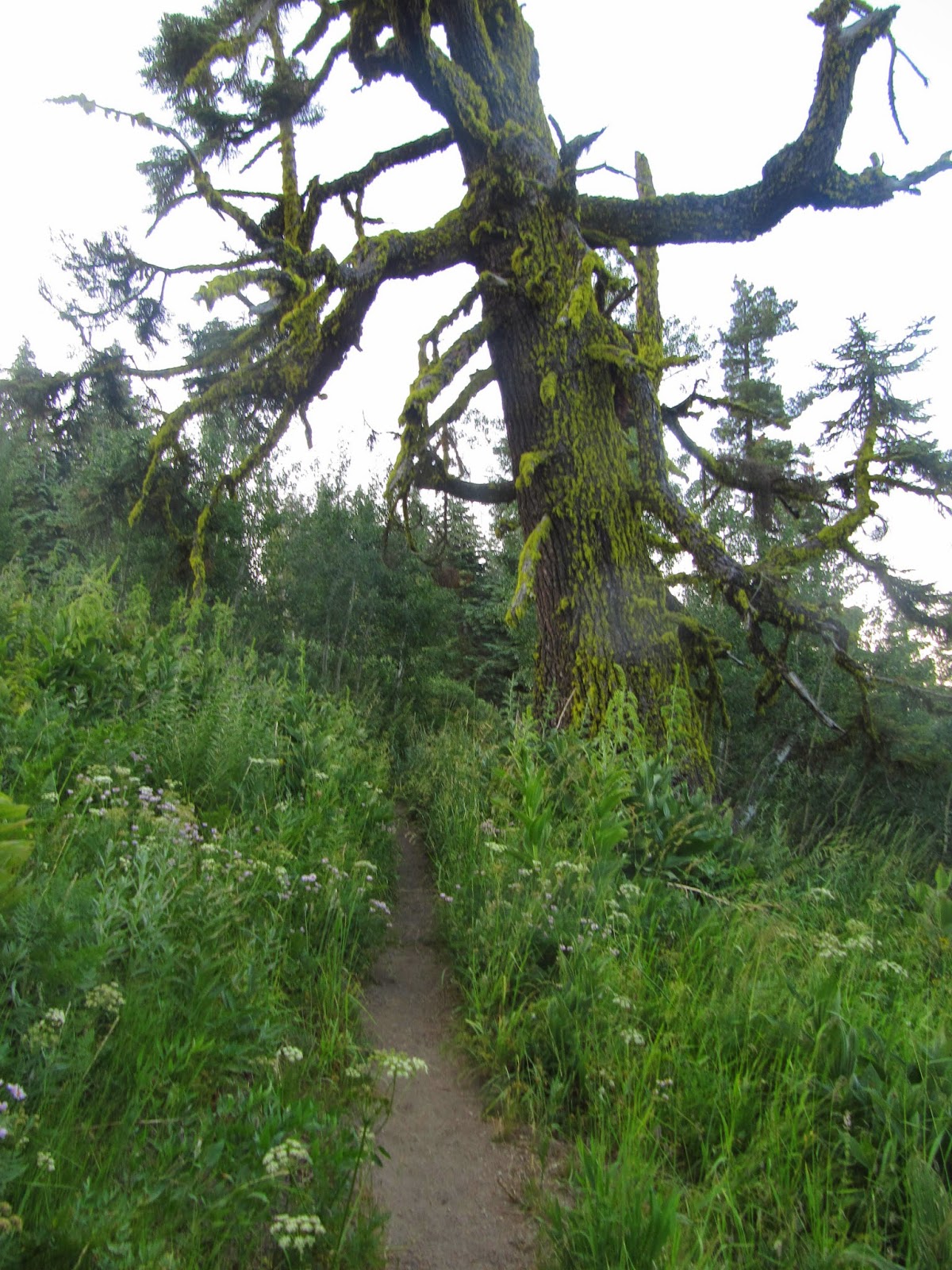 Other sights along the trail. 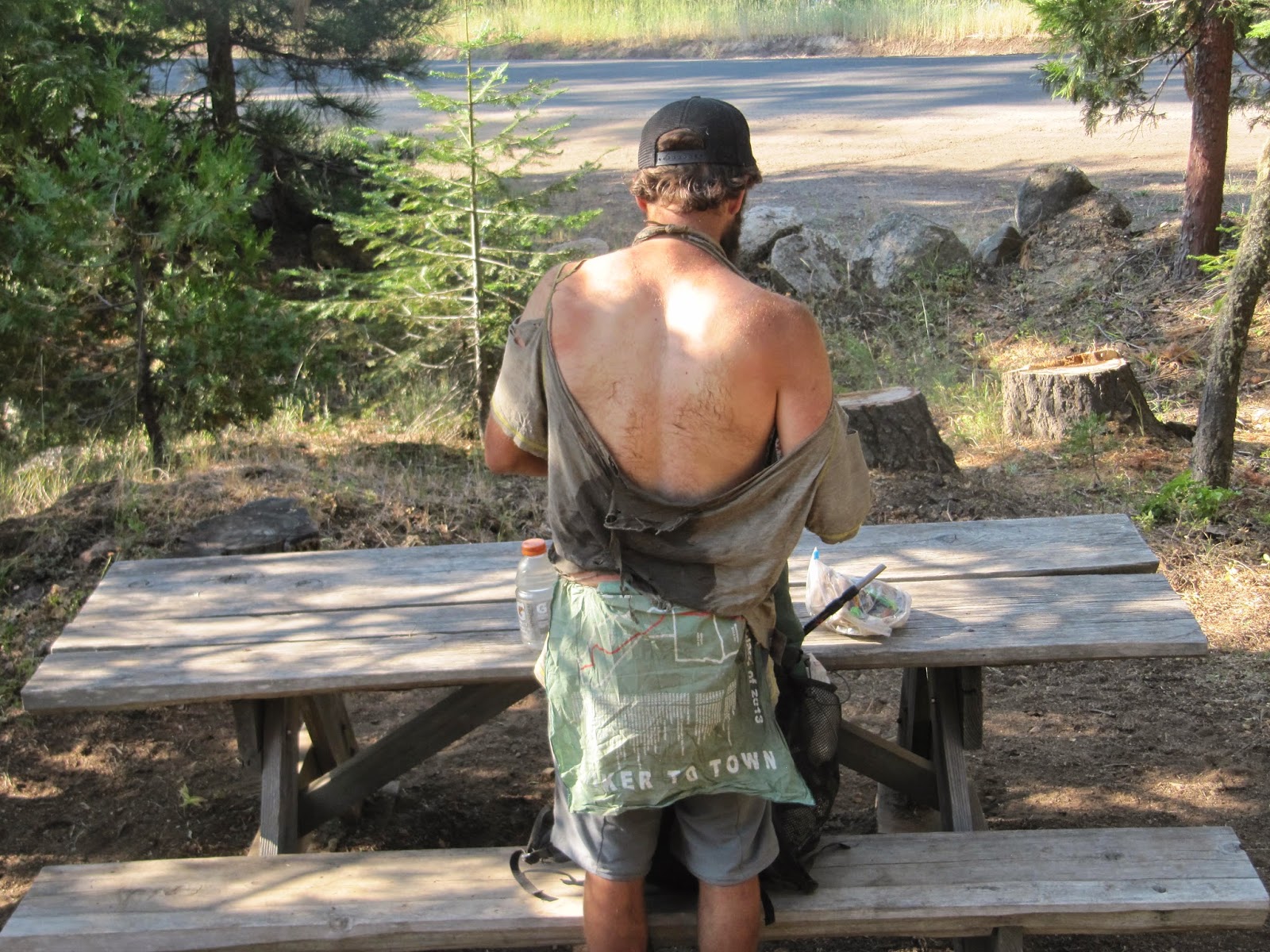 And along the way, I ran into Veggie just before Callahans' Resort. 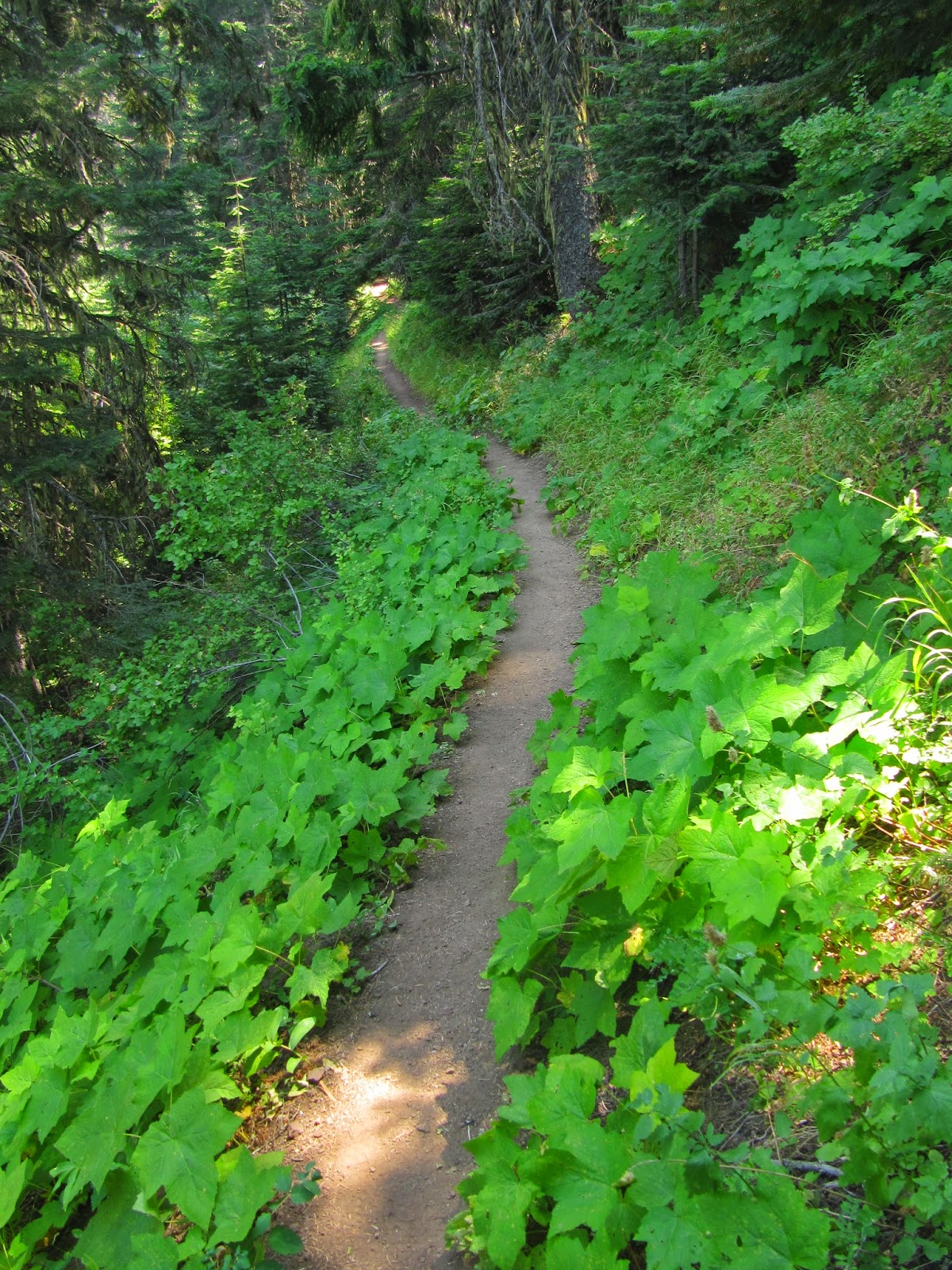 The trail, when flat is always a pleasure to walk along.