Three months of trudging through California had come to an end; it was a great state, but I was glad it was behind me.  Now it’s on to Oregon and the first thing that comes to my mind when I think of the state, is the movie Paint Your Wagon starring Lee Marvin.  Why, I had no idea, for the setting of this movie was the gold rush days in California, not Oregon.  But wagons reminded me of long, emigrant wagon trains heading west along the famed Oregon Trail for the Willamette Valley, often portrayed to emigrants as the land of milk and honey.  I was in Oregon now, and without a doubt, it was going to be considerably different than California.

California was quite diverse in its climate, landscape, plants, and animals.  In contrast, Oregon is more homogenous; the land is much flatter, the rock virtually the same– basalt and volcanic rock, and the land is lower in elevation.  The forests are predominately mountain hemlock and the hiking is over rolling ridges without a lot of elevation change.  The consensus among hikers is that the average daily mileage will increase because of the flatness of the terrain.

Crossing under Interstate 5, the trail headed east across barren hills before circling north around the landscape's most notable feature – Pilot Rock, a beacon for weary emigrant travelers on the Applegate Trail heading for the Rogue Valley.

Geologists refer to it as a volcanic neck, which is molten lava that never reached the surface of the earth, but cooled inside the volcano’s throat. In time, erosion stripped away the softer, outer layers of rock, eventually exposing the volcanic neck.

The land underneath the trail was crisscrossed with a multitude of Jeep trails, some abandoned, and others quite active.  Springs and other water sources were plentiful in this section of trail, but I still carried three to four liters whenever I filled my containers.  For a long time now, I had been flavoring my water with squirts of MiO Liquid Water Enhancer which made it easier to consume large amounts of water, but the downside was that I had to stop often to take a whiz.

I was delighted that the terrain was relatively flat which made hiking more pleasant.  As I walked, I hummed the song "The Happy Wanderer," and sometimes I would burst out singing the English words.  I don’t speak a lot of German anymore, having learned it on my Mormon mission to Bavaria, Germany, fifty years ago, but when I ran out of known English words, I improvised a mishmash of German words to accompany the tune. It made me happy and helped the miles speed by.

My maps showed that I would be approaching three bodies of water – Little Hyatt Reservoir, Hyatt Lake, and Howard Prairie Lake, all three being man-made lakes for water storage that fed into Emigrant Lake five miles southeast of Ashland, a primary source of water for the Rogue Valley.

Little Hyatt Reservoir was small, but had good swimming.  The other two lakes had resorts that catered to fishermen and recreationalists, complete with convenience stores, rental cabins, and boat docks.  The facilities at Hyatt Lake also catered to PCT hikers and will hold resupply boxes for them.
Beyond the lakes, the trail meandered through low meadowlands and then began an ascent to a crossing over paved Keno Road, a major logging road for trucks hauling timber to the lumber mills at Klamath Falls.

In the last few weeks, I’ve taken the time to learn about some of the trees that I associate with all day long.  Thus far, I am able to identify the incense cedar - it has overlapping scale/leaves, and mistletoe hangs from its branches like Spanish moss; the mountain hemlock – this one is easy to spot, as it has short flat needles and the tops tend to droop; the Douglas-fir – think Christmas tree and the sugar pine – of all the pine trees, this one has the longest pinecone and is a source of pine nuts.  Now, when I walk through the forests, as an added diversion to monotonous trail hiking, I try hard to identify the conifers around me.

Old Baldy Mountain came into sight, with its heavily logged southern slopes.  The trail shot past Baldy’s summit and once again plunged into the dense green canopy that characterizes the Oregon forest.  In many places, the trail was overgrown, as shrubbery of all types spread their branches over the trail.  And if there was condensation on the branches from dew or rain the night before, everything got wet.

It was getting dark and I was not finding a decent place to make camp; I pushed on with the hope of finding a log cabin shelter known as the Brown Shelter that was supposed to have a water well with a hand pump adjacent to the cabin, and a wood-burning stove inside the cabin. As I hurried along the trail, undergrowth grabbed at my ankles trying to trip me up, while branches slapped me in the face.  When the foliage became uber dense, I would position my hiking poles in front of my face as a guard and first defense against smacks to the face.

I didn’t know what I was looking for in terms of a shelter, but with just a little daylight left, I found a wooden sign attached to a tree with an arrow pointing off to the left that said Brown Shelter. Wasting no time, I took the spur trail and reached the log shelter in a matter of minutes.  I breathed a sigh of relief, for I have a home for the night.

The structure measured twelve-by-twelve and was constructed like a Lincoln Log cabin with heavy, overlapping plastic strips for a door, such as one would find in a refrigerated meat locker.  With my headlamp on, I entered the cabin and looked around.  There was a wood-burning stove in the middle of the room, raised wooden sleeping platforms around two sides of the cabin that could accommodate five people, and several wooden chairs plus a few kitchen implements.

Firewood had been neatly stacked under the sleeping platforms, and an axe stood near the door.  In a heavy snowstorm or downpour, this would be a decent place to wait out the weather, but tonight, the weather was great and I chose to sleep outside.  My desire in coming to this place was to find a flat place to sleep, but there wasn’t much flat ground available, so I slept on the picnic table instead.  A plaque on the inside of the cabin said that the structure had been built in 1993 by the 162nd Engineer Company of the Oregon National Guard. 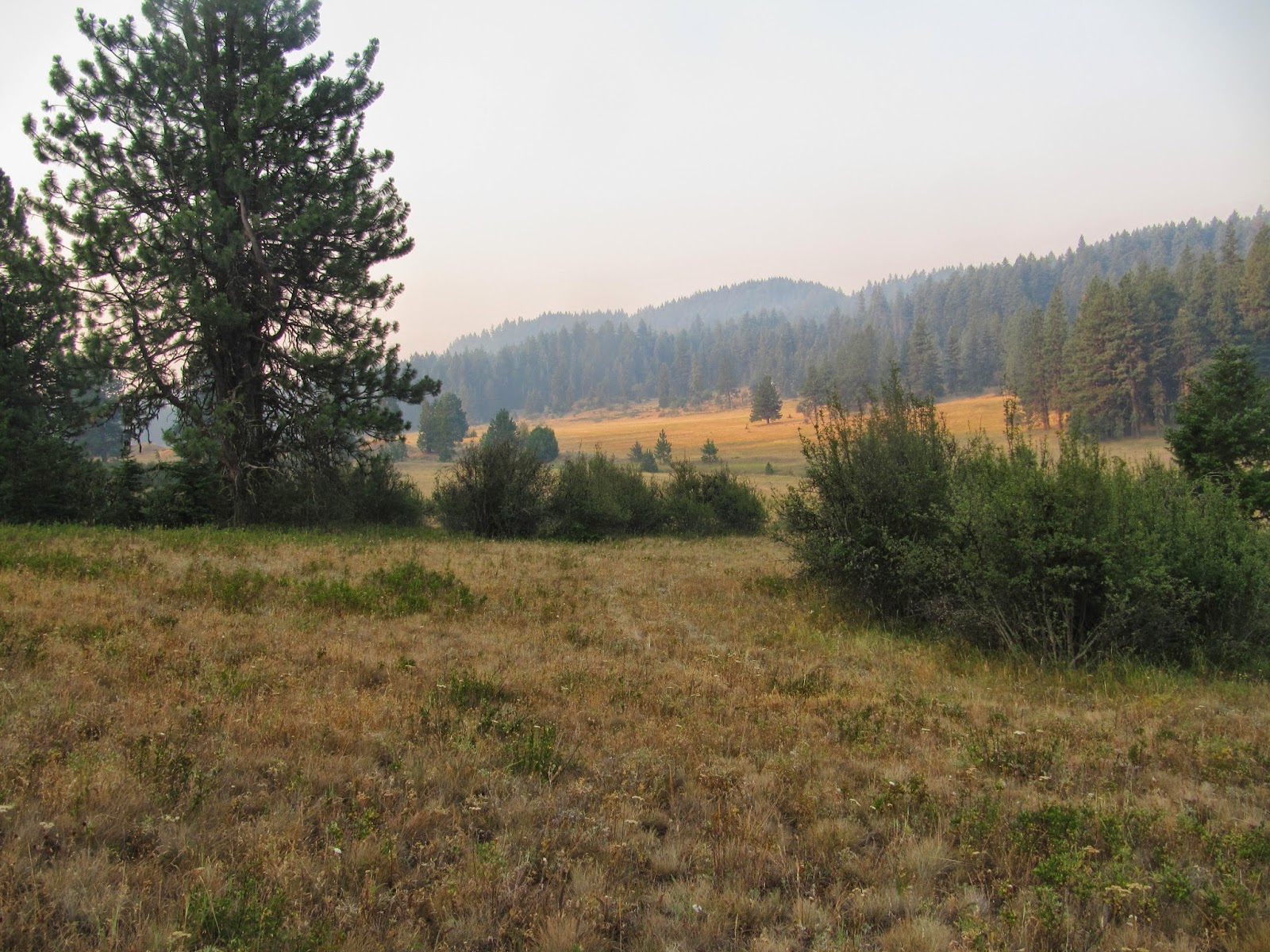 Oregon was indeed flatter than California. And instead of granite rocks on the trail, I began encountering lava and basalt rocks 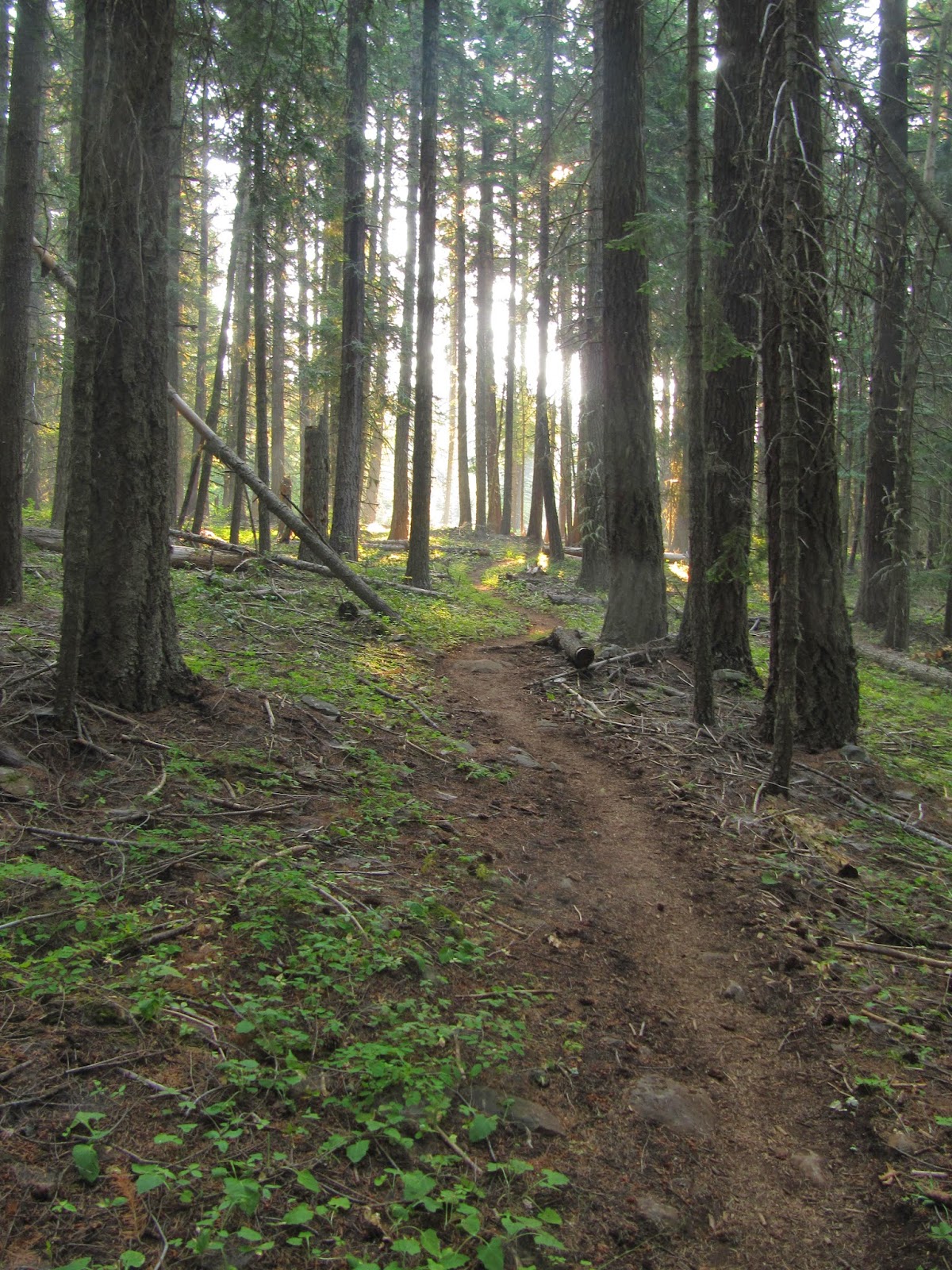 There weren't many sounds in the woods, just the thumping of my own heart.