As I made my roadwalk down Grinder road, I saw a number of signs proclaiming the area to be part of the state of Jefferson, and after crossing the bridge over the Klamath River and heading west on Highway 96 towards the town of Seiad Valley, I passed a sign on the south side of the highway bearing the seal of the state of Jefferson, showing the double X's in the center of the seal.  I got the impression there was still a lot of sentiment for the good ol' days of the patriotic rebellion, but not a lot of activity.

Downtown Seiad Valley was one general store/café/post office building and a trailer park/campground which constituted the central portion of the town.  The valley itself was unincorporated, which meant there were no specified boundaries to the valley and surrounding hills that concealed a population of approximately three hundred inhabitants.

From a distance, I could see an American flag flying from the top of the general store/post office building – flags always fly above a post office, and as I came nearer to the building, I saw the large round sign above the gabled end of the building identifying the Seiad Store.  The sign was a combination of the state of Jefferson flag and the great seal.  The sign was round and painted green, with two X's in the middle, one above the other, and the words Seiad Store printed above and below the X's.

I walked around to the side of the building to the parking lot, and discovered a long line of backpacks sitting on the ground.  Judging from the number of packs, I would guesstimate there were eight to ten thru-hikers inside the café.  I sat my pack down beside the rest of them, and then walked over to the post office to ask for my resupply package.  It was there, and I thanked the postal employee for her super friendly service.

The Seiad Valley Café was well known for its pancake challenge; you eat 5 one-pound pancakes in under two hours and your meal is free; otherwise, the cost is $13.95.  From the reports I had seen, there were very few hikers who could finish the breakfast, but they had fun trying.  I would like to have tried the challenge, and I think I could have finished the five pancakes but the challenge was only available during the morning hours when breakfast was being served.

The store was crowded with smelly hikers; every stool, chair, and table overflowed with long-haired, bushy-bearded hikers.  There was no room for locals.  The female hikers were outnumbered four to one inside and outside; I only saw Orbit, Runs with Elk, and Wendy. Cookie had been here, but had left early this morning.

I had lunch with Swiss Army and Storytime, and then took time to repack my backpack with the new food items; I had an excess of snacks and freeze-dried meals and offered them to anyone who might want to supplement their store of foods.  Everything I offered was quickly snatched up.

The day was hot, and the five-thousand-foot climb out of the Seiad Valley was notorious for being difficult.  I and many others decided to wait a few hours to let the heat of the day pass before setting out.  The owner of the trailer park/campground next door to the café/store had showers and laundry facilities available, as well as lawn and shade trees, so the group of hikers who was waiting to leave migrated to the shade trees and sprawled out on the lawn to await their time of departure.

I took advantage of the time to shower – best four quarters I’d ever spent, as well as rinse my clothes in the shower.  I didn’t bother to put the clothes in the dryer; I just put them on damp and allowed the sun to dry them out.  My time of departure from the campground was at 5:00 p.m., which was still several hours away.  I spent the remaining time eating a pint of Ben and Jerry’s banana split ice cream and resting on the lawn. 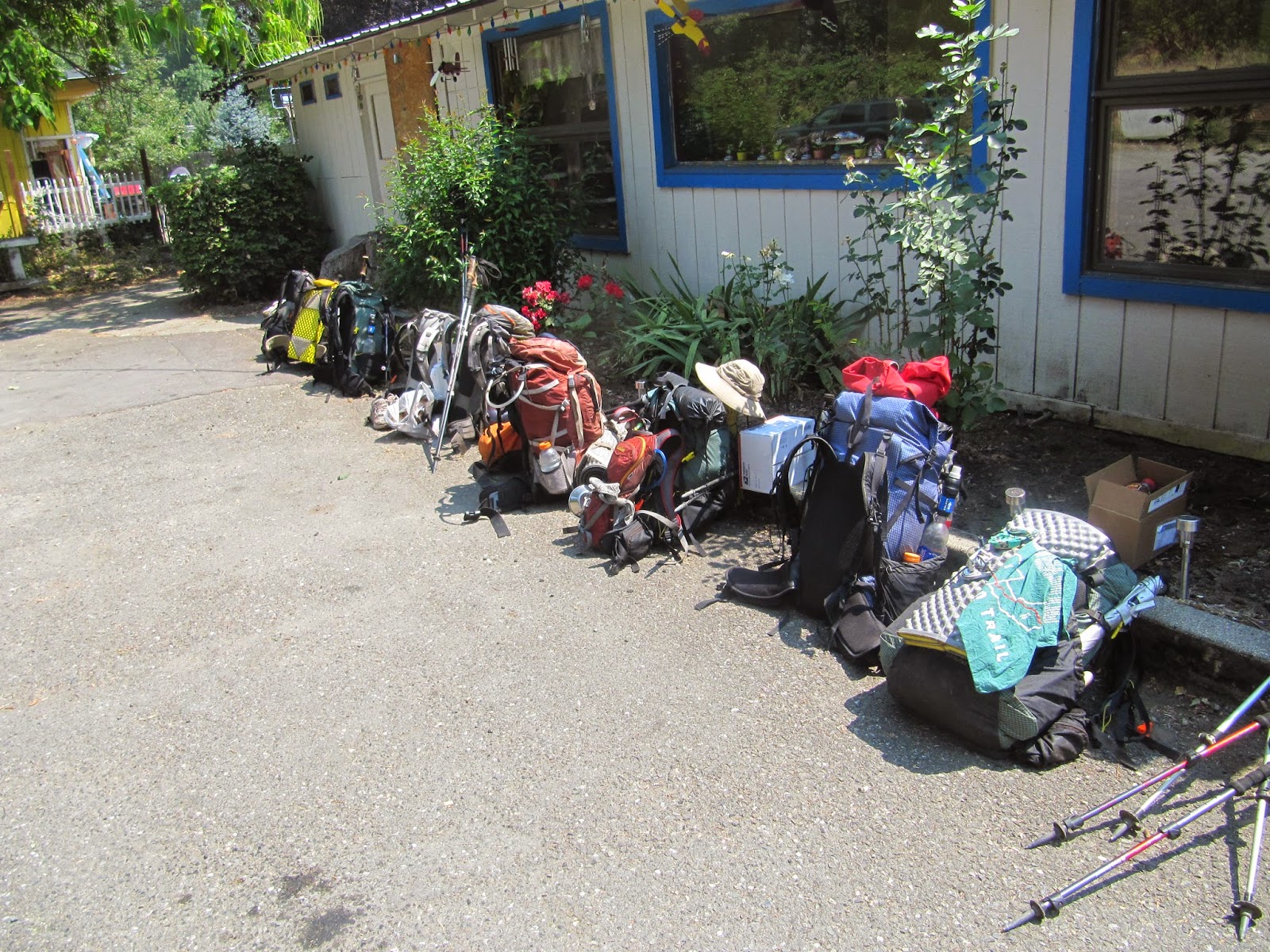 At the Seiad Valley store/cafe/post office, hikers shuck their packs while they enjoy the air conditioned comfort of the cafe and order a huge stack of pancakes. 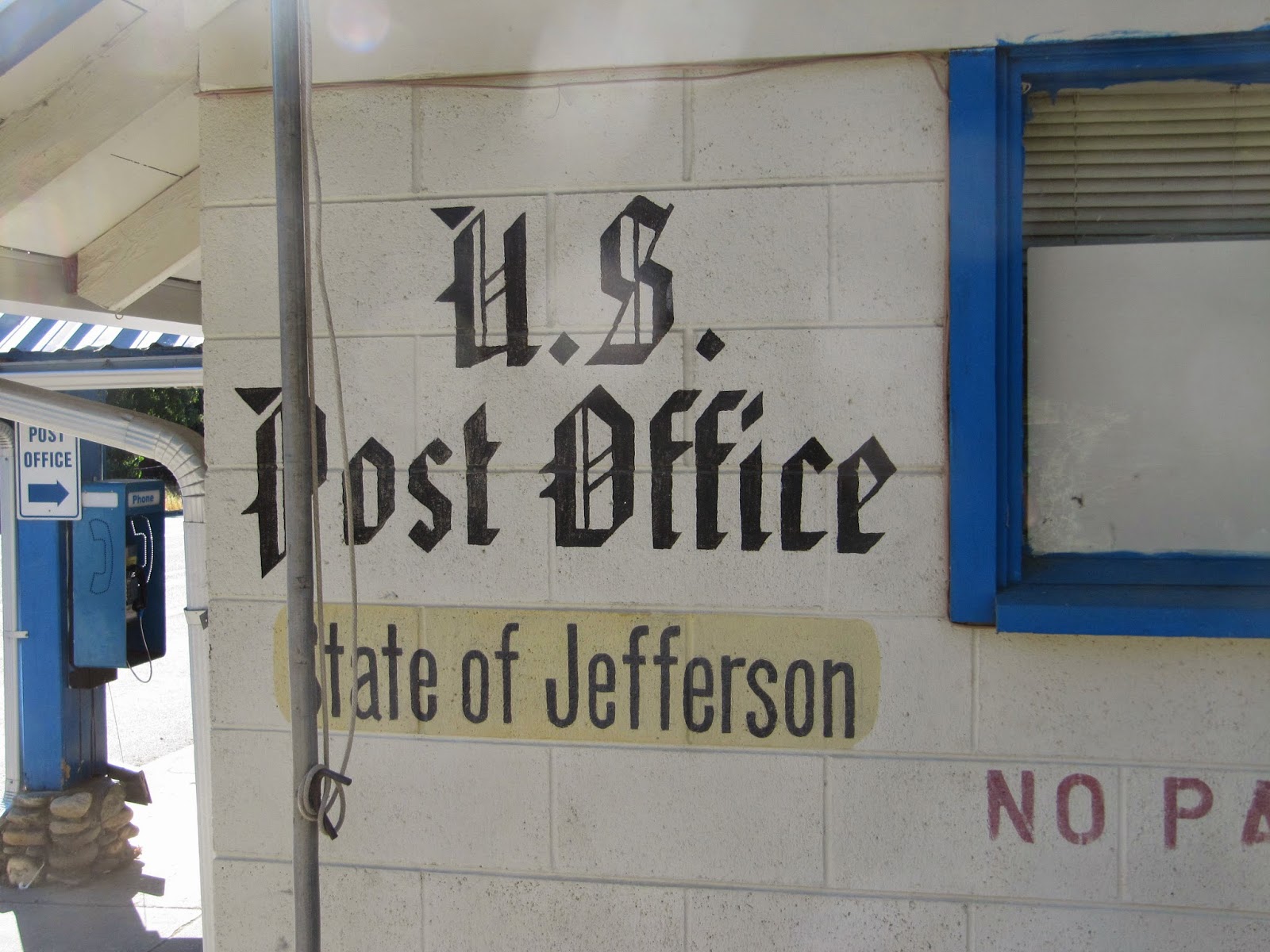 The post office is in the same building as the store and cafe. 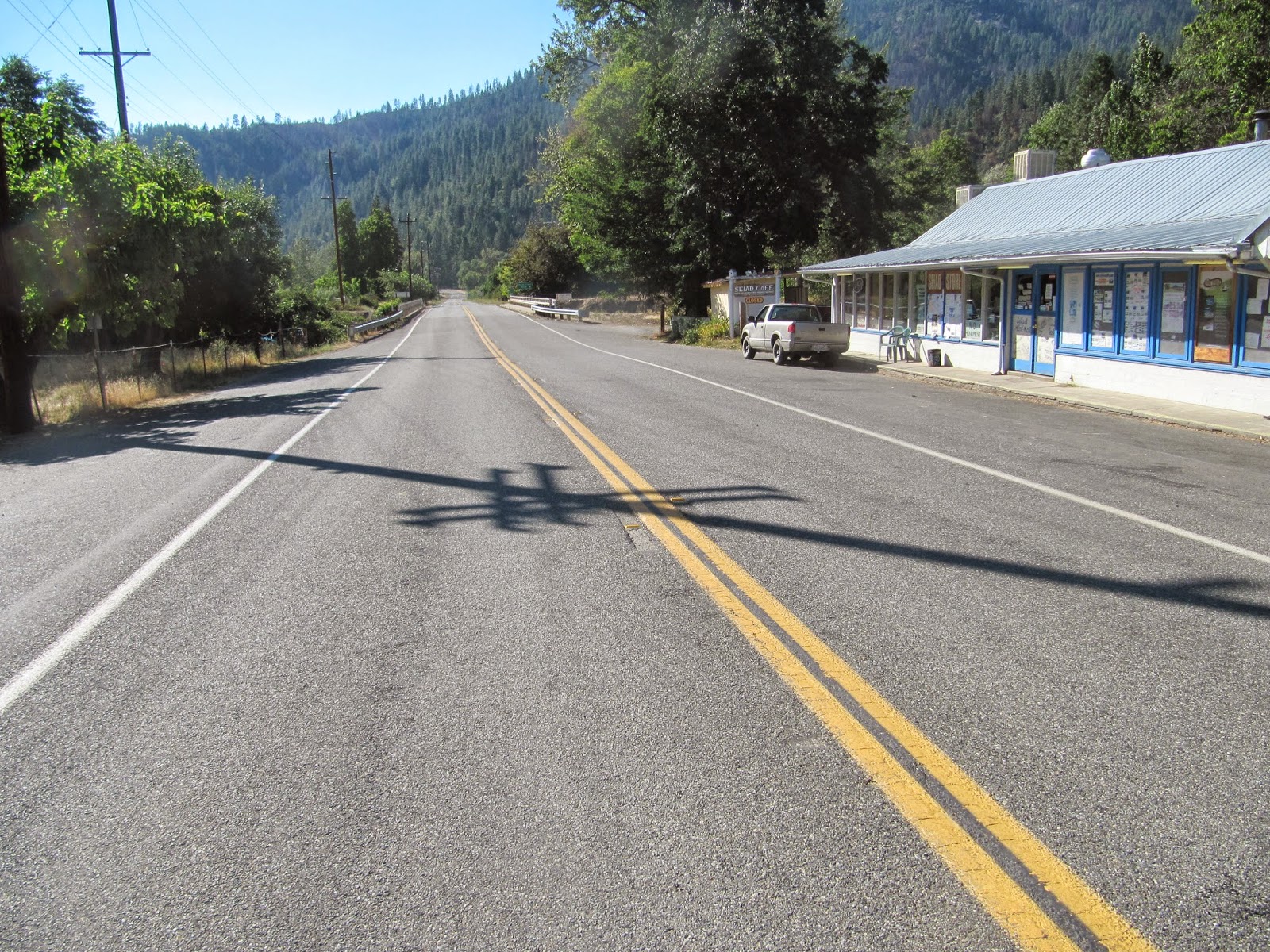 Looking at main street of Seiad Valley and the only building in town. 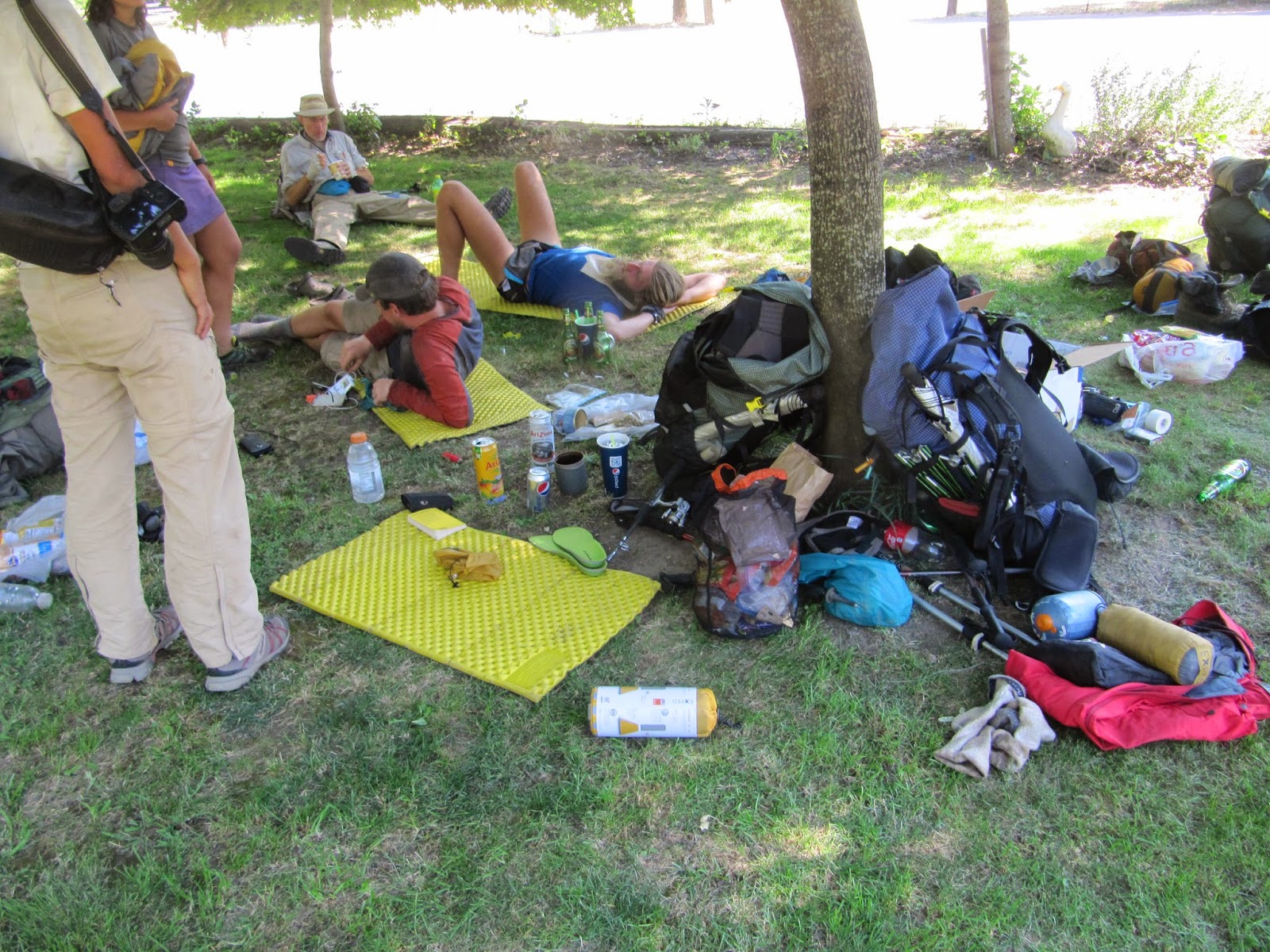 Next to the store was a camp ground and the owner allowed hikers to rest on the lawn, in the shade of the trees, while waiting for the temperature to drop before commencing the long climb out of the valley. 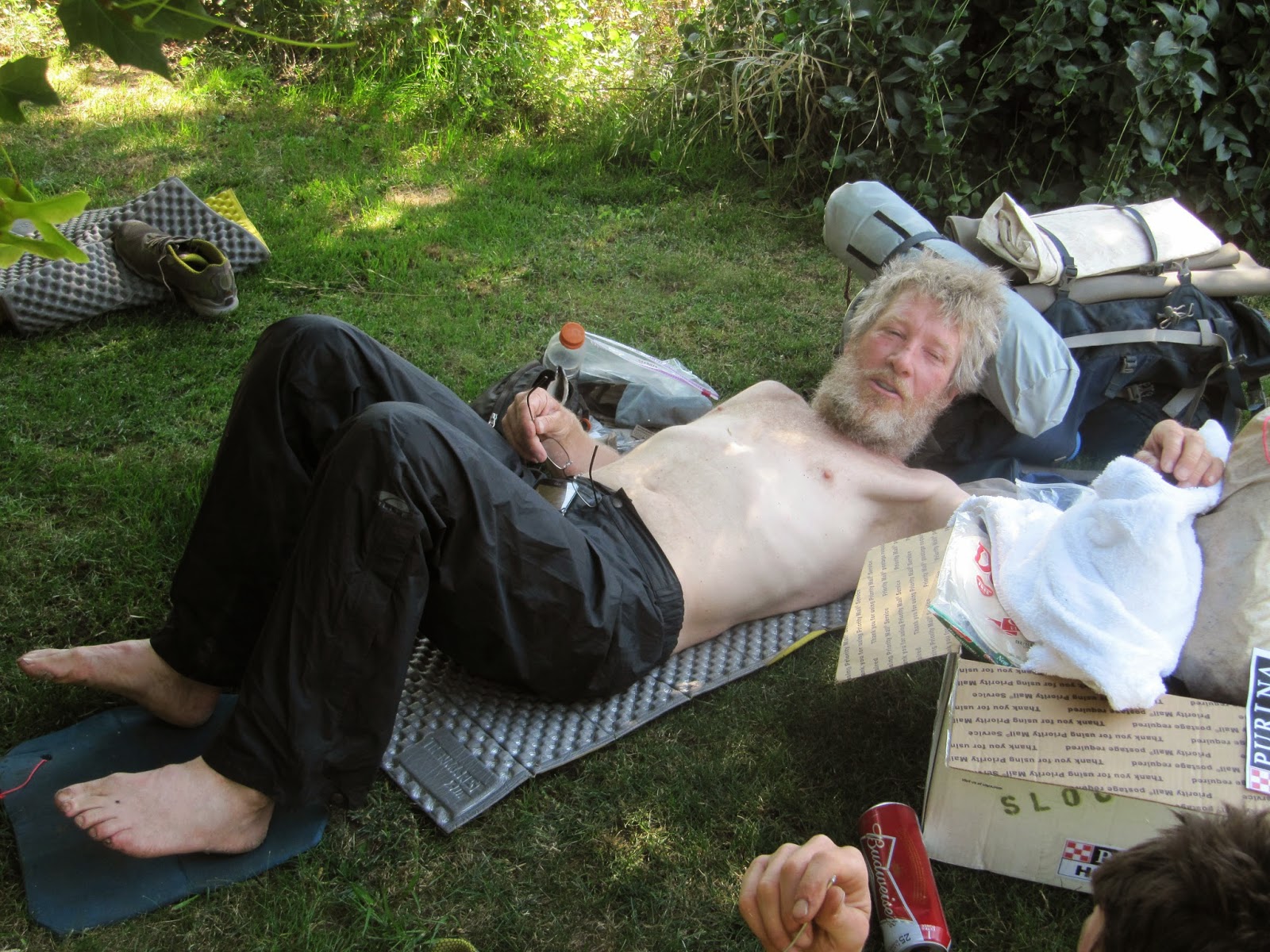 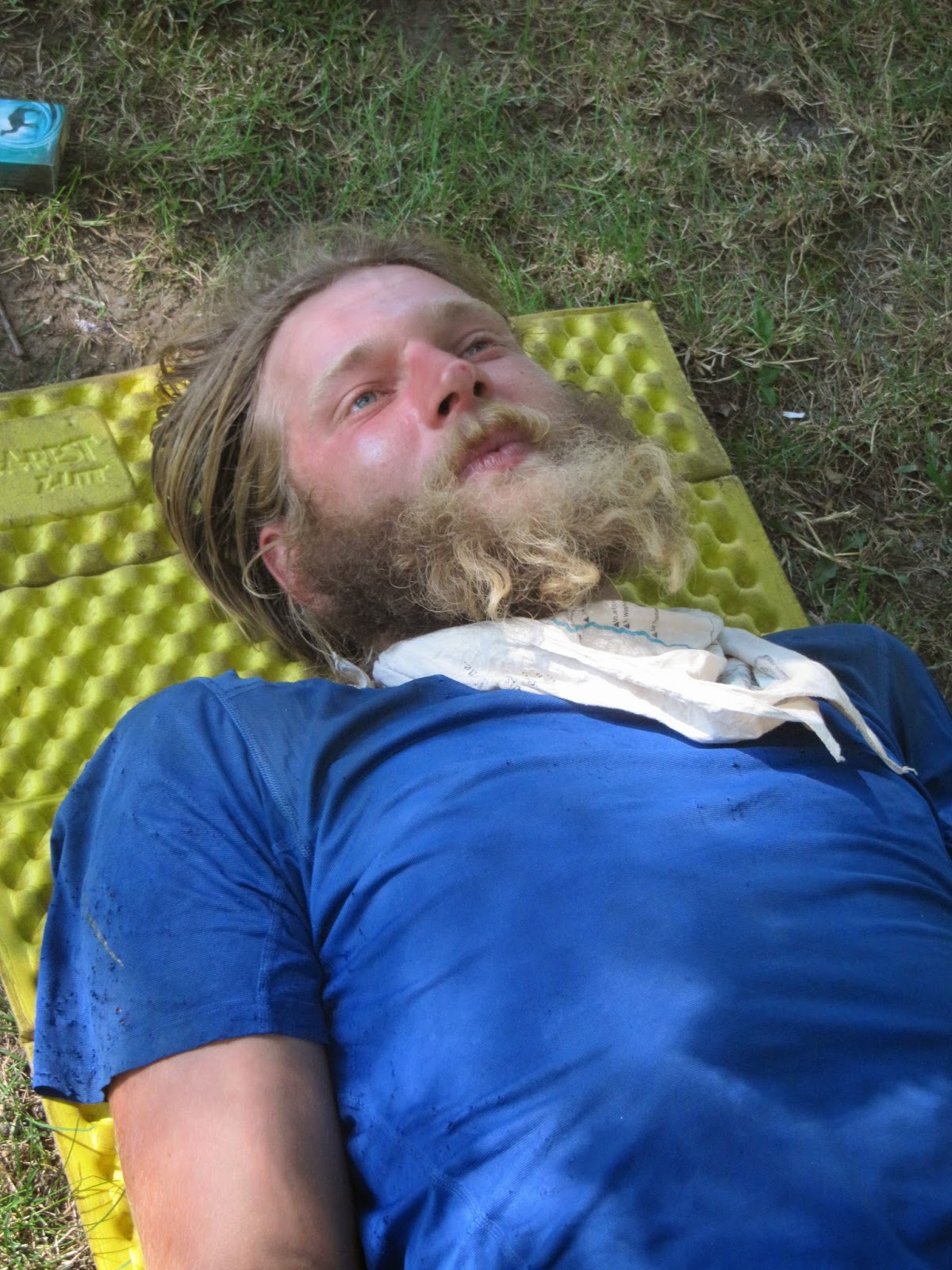 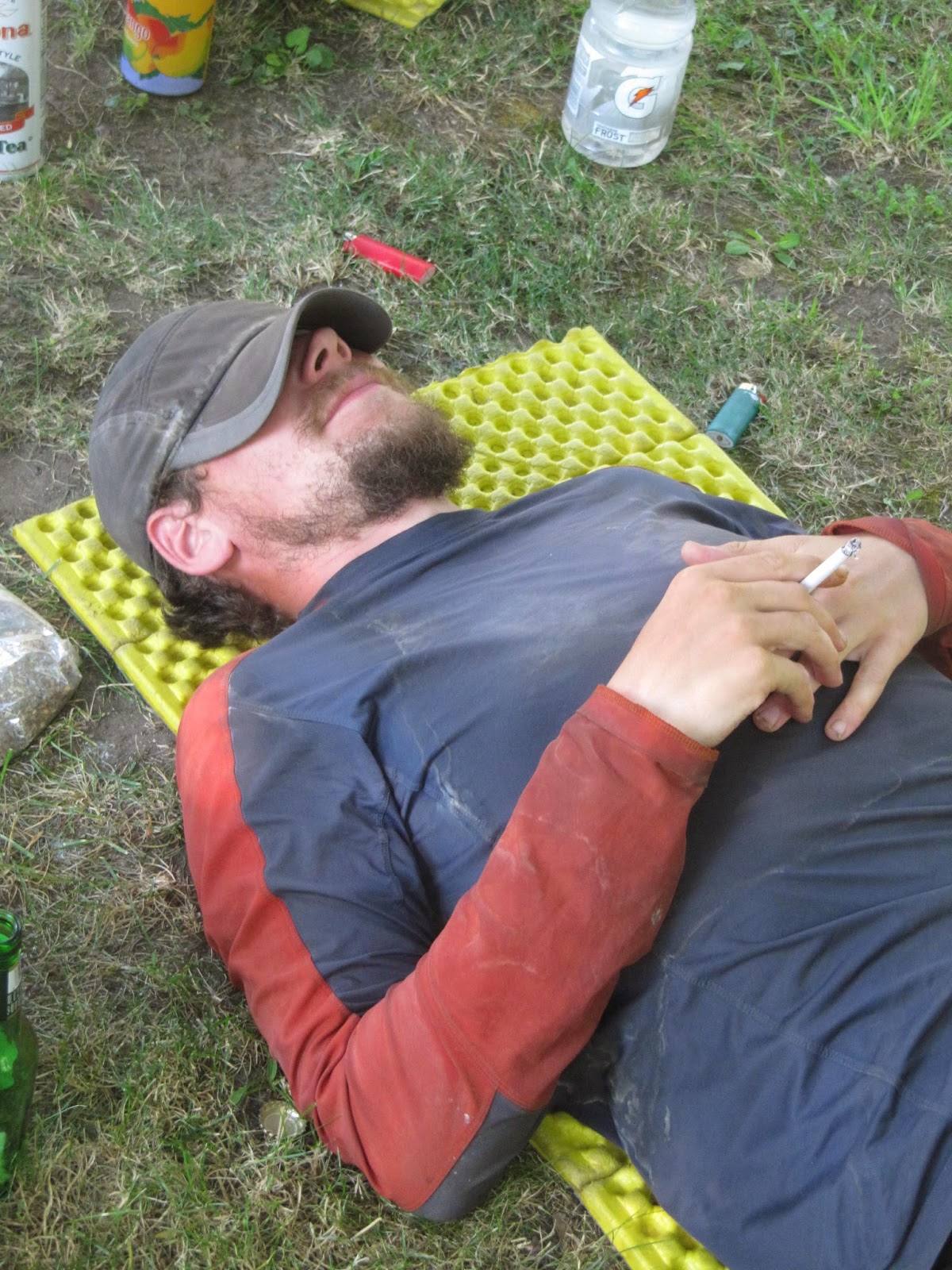 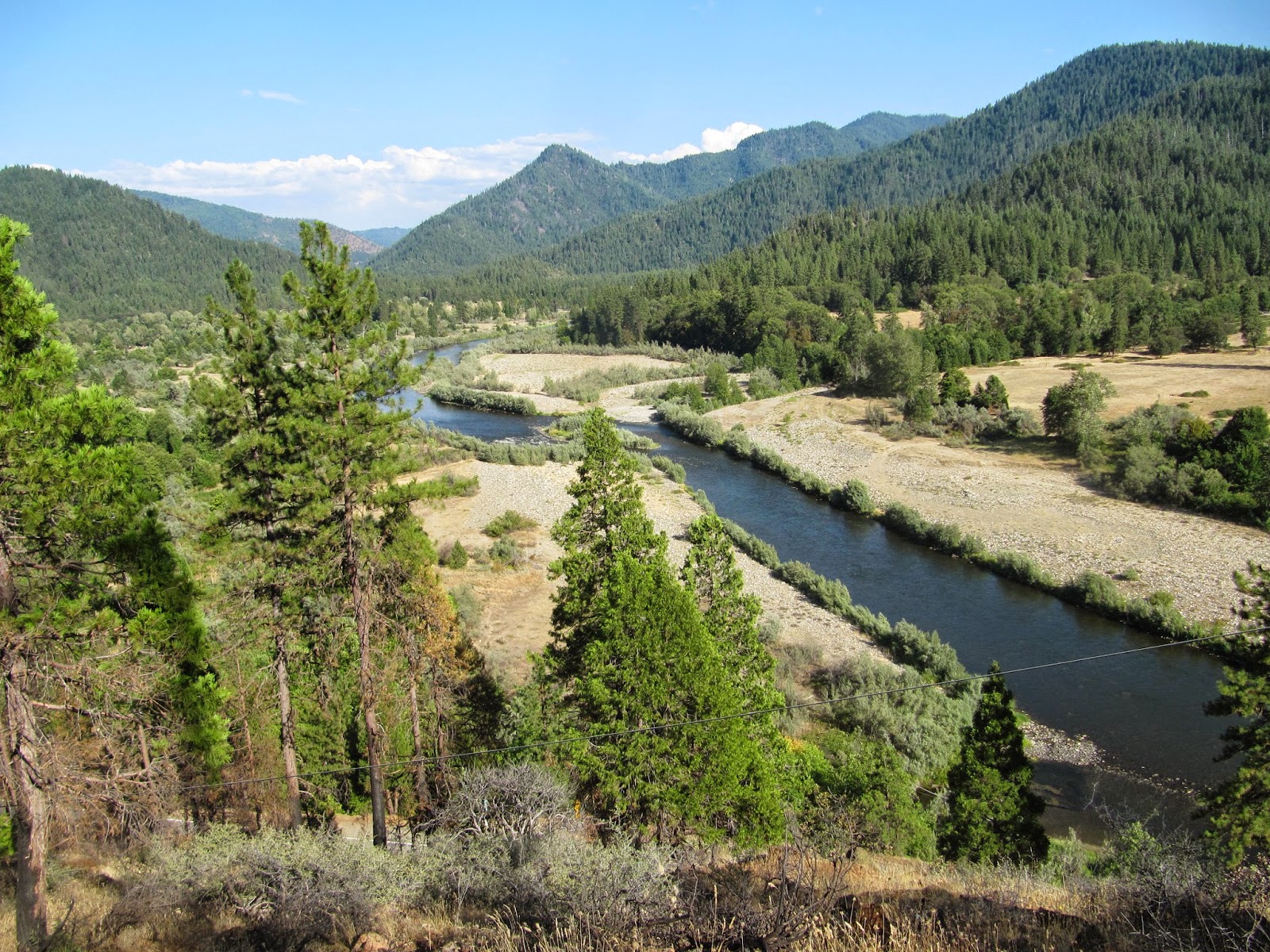 Stopping for a moment, after starting the long climb out of the Seiad Valley, and looking back at the Kalamath River that flows through the valley. 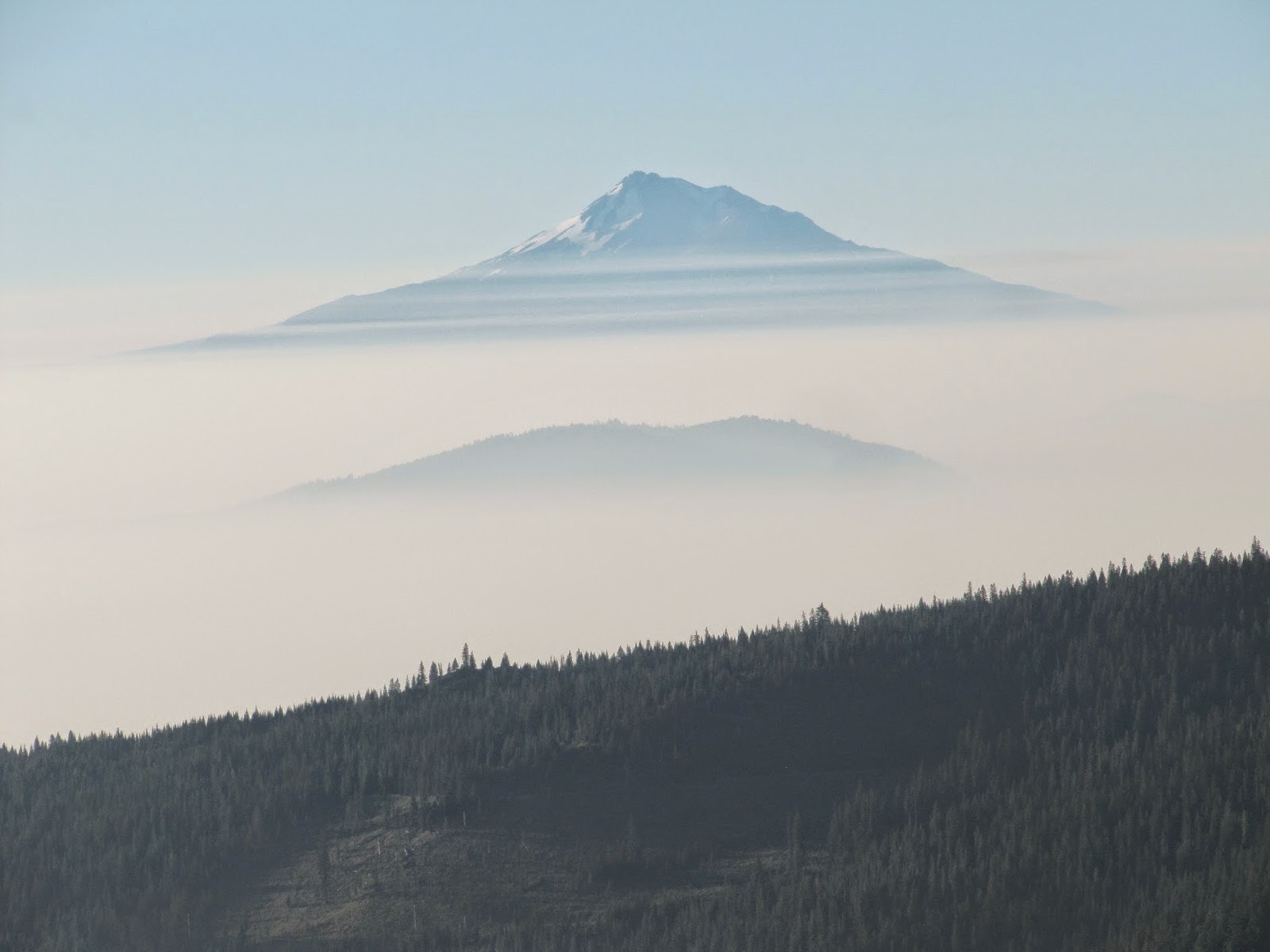