It was dark when I left this morning, and Swiss Army was still snoring as I crept out of camp.  In just a short distance, the trail crossed over a clear stream of ice-cold mountain water.  I stopped to fill my water containers, and in the dim light of my headlamp, I could see that there was a fork in the trail.  A little confused as to which way to go, I made my judgment based on the depth of the tread in the trail.  I chose the left-hand fork and hoped it was the correct one.  Not too far along the trail, my choice was verified by a PCT metal marker tacked to a tree.  However, had I been totally confused concerning which trail to take, I could have retrieved my Garmin GPS, turned it on, and chosen my direction from the information that would appear on the screen.

To my knowledge, I was one of the few trail hikers that was actually using a stand-alone GPS such as Garmin for direction finding, and for good reason; it's old-school technology compared to what is now available.  Most of the hikers who used GPS for direction and location finding did so with a downloadable app for their Smartphone.  The two most common apps were Halfmile's, offered free by the owner, Lon Cooper, who produces the paper maps most hikers use, and another app called Guthook, which is a set of four downloadable maps, one each for Southern and Northern California, Oregon, and Washington, at a cost of $5.99 per download.

When I bought my Garmin GPS in 2011, GPS apps for the Smartphones weren’t available.  With the Garmin, I was able to download all of Halfmile’s maps into the unit and it worked reasonably well, although I never really became proficient with it.  When activated, it would display waypoints, then with the mouse hovering over the waypoint, the mileage from the Mexican border would be displayed on the screen.  I never found the setting that would show the PCT as an actual line on the map, which was disconcerting.

Many hikers had both apps downloaded in their Smartphones and both were user-friendly, but from what I saw, Guthook’s app provided a ton of information in addition to pinpointing one’s location on the trail.  I had Guthook’s app downloaded on my Version Android phone, but it took so long for the GPS to pinpoint my position, that I didn’t use it much, and when it did refresh, it always started at the front of the trail, as opposed to starting at my actual position.

If I were to do the Pacific Crest Trail again, I would leave my Garmin GPS home and buy an iPhone with all of Guthook's maps properly, and I emphasize properly, downloaded into the unit.
The maps I’m using aren’t expanded enough to give a real bird’s-eye view of the land surrounding the trail, which makes it hard to keep straight the boundary lines between forest lands and wilderness lands.

Etna Summit and the road leading down to the small community of Etna were now just a few miles away.  The trail began a gradual descent down a canyon, and as I got nearer to Etna Summit and the highway that crossed over it, I could see the land falling off to either side of the ridge.

The last big push took me down the trail of dirt and rock to the trailhead and parking lot and to a bright green 1978 Volkswagen bus sitting at the edge of the road.  I knew instantly that the bus belonged to Weebee’s parents, Kermit and June Bug, and they were performing trail magic.  I was so delighted to see them; we all embraced like we were long-lost friends and had known each other since childhood.  Actually, this was the third time I had encountered them on the trail.  They are such sweet people with oversized hearts of gold.

They invited me to sit in a camp chair around the small camp table they had set up next to their bus.  They offered cookies, salty snacks, and cold lemonade.  The best part of their trail magic was just the opportunity to sit in a real chair.  As we visited, I contemplated how best to get into Etna – twelve miles distance, and it was soon apparent that hitchhiking was the only solution.  I inquired about Runs-with-Elk and Cookie, and Kermit said they had come through a few hours ago, and immediately caught a ride. The green VW van belonging to Kermit and June Bug. 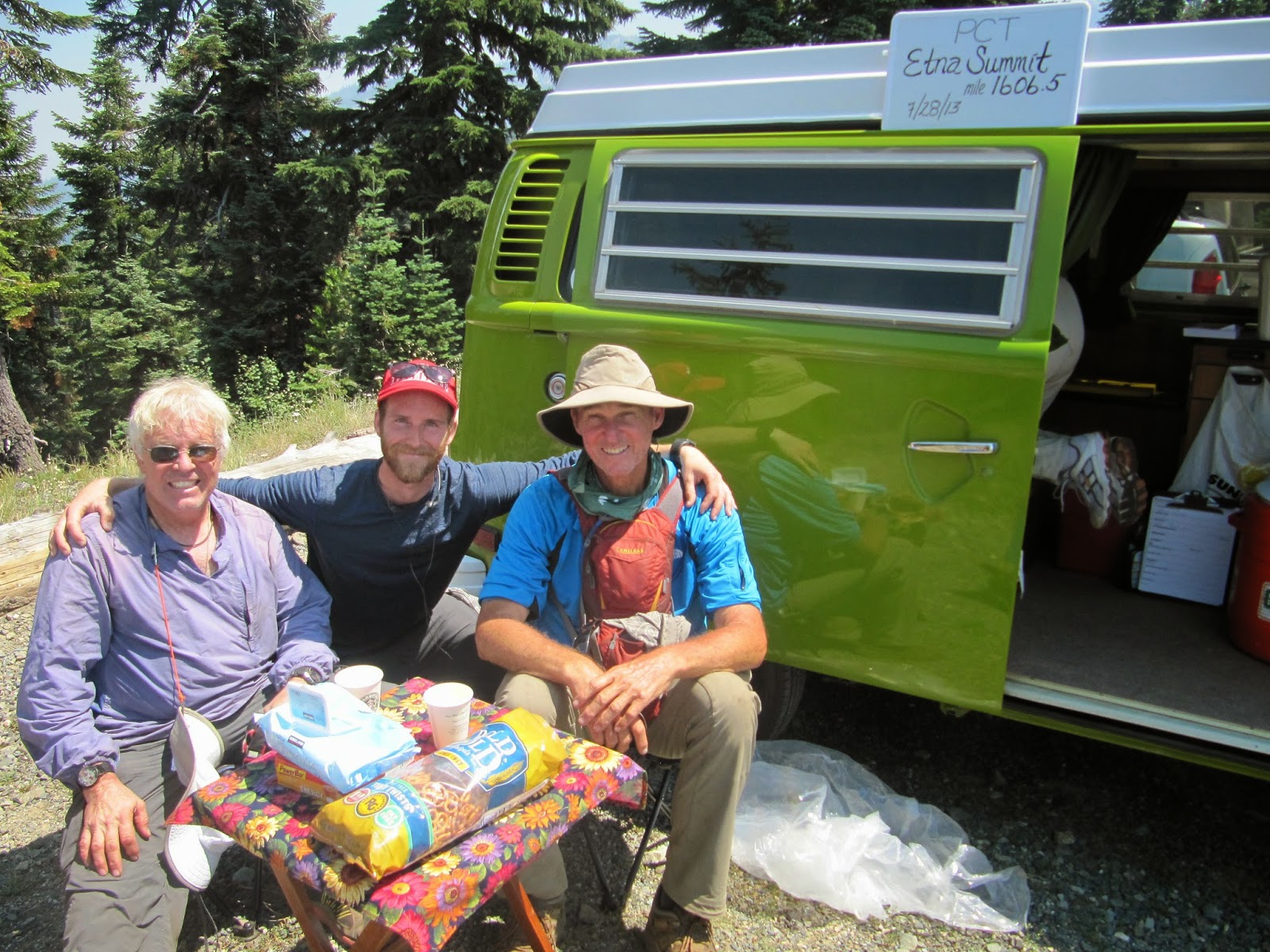 Where the road crosses Etna Summit, Kermit and June Bug set up their trail magic. Sitting at the table with me are Swiss Army and Fun Size between us. 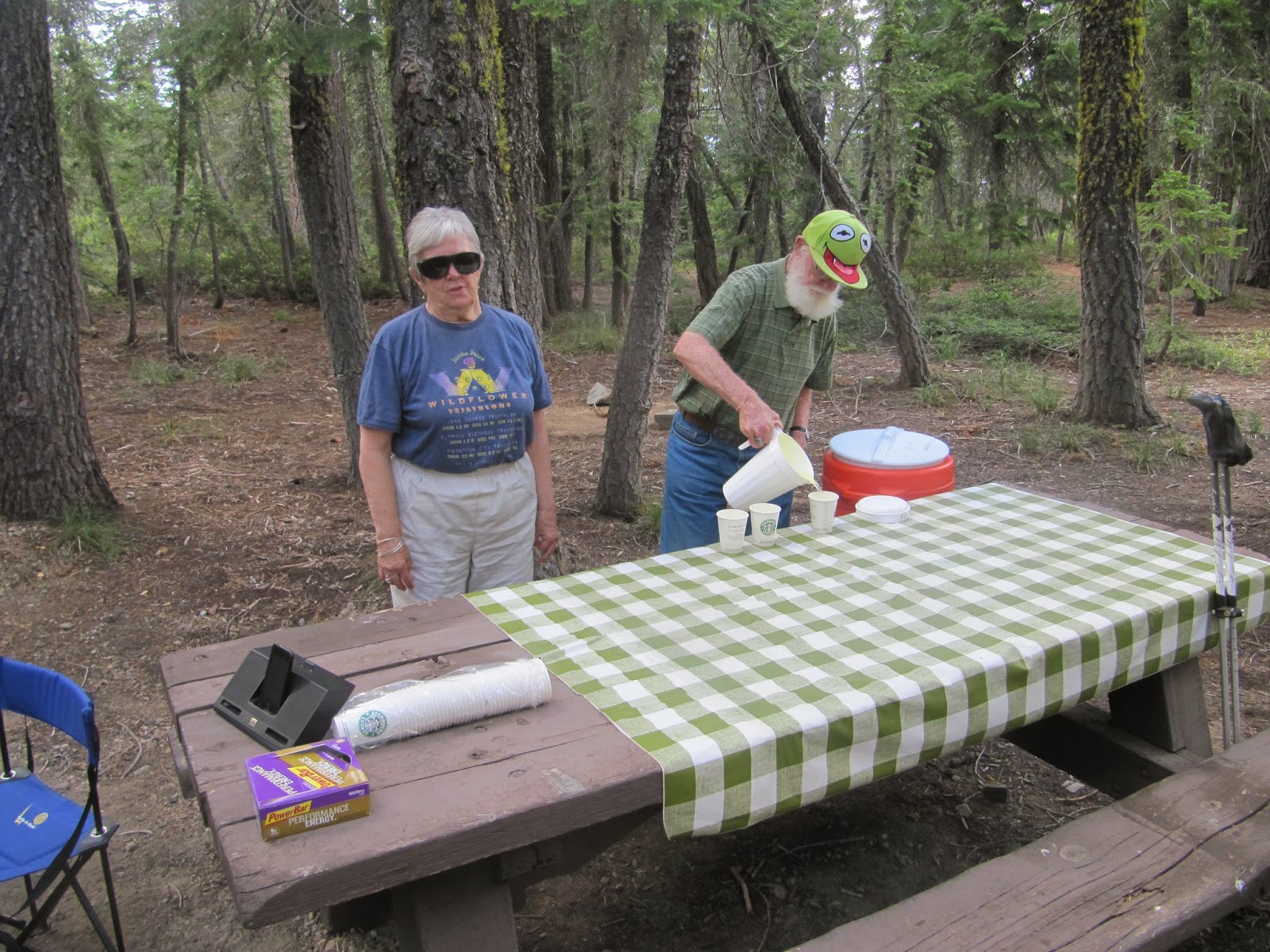 Kermit and June Bug getting their trail magic ready for incoming hikers. We love them so very much for their kindness and generosity.