Clouds began to form as Cookie and I started our walk, and the weather was quite blustery by the time we reached the Watchman Trail leading to the fire lookout station several hours later.  There was a parking lot and restroom facility adjacent to the Watchman trail and the lot was filled with cars and visitors who were either gathered around the lake’s viewpoints or were preparing to hike the Watchman Trail.

Cookie and I stopped to take pictures of the lake, and several park visitors, upon learning that we were PCT hikers, wanted to have their pictures taken with us.  We knew we didn’t smell too good, which is why the visitors probably didn’t linger long after the pictures were taken.

Crater Lake was formed when the original volcano known as Mount Mazama blew its top; the peak that no longer exists was given the name Mazama by a mountaineering club from Portland, who came to the lake in 1896 on an excursion.  They named it after their club – the Mazamas, which is an Indian name meaning “mountain goat.” (Lewis)

Mount Mazama started to grow and expand about four hundred thousand years ago.  Eventually it reached an approximate height of twelve thousand feet, then in much the same manner as Mount Saint Helens disintegrated in 1980, Mount Mazama exploded approximately 7,700 years ago, resulting in a loss of over five thousand feet of mountaintop.  As lava continued to flow down the mountain and into the surrounding countryside, with some flows extending as far as forty miles away, the magma chamber below the mountain emptied, leaving a void into which the walls of Mount Mazama collapsed.  The lake inside the caldera, at 1,943 feet is the deepest lake in the U.S. and it took approximately 720 years to fill.  Rainwater and snowmelt, coupled with evaporation, allows the lake to replenish itself every 250 years. (Geologic)

From the parking lot, the trail veered to the left and crossed a wide expanse of open land. At mile 1,844, the Crater Rim Trail, which is the official alternate trail, reconnected with the old PCT and equestrian trail.  Horses and their riders are not allowed on the rim trail and must use the official PCT which is lower in elevation and departed from Dutton Creek where I camped last night.

After passing this trail junction, Cookie and I took a break for lunch; it was stressful for me to try and keep up with her, so after finishing lunch I told her to continue on without me. Picking up the trail again, I passed around the west side of Grouse Hill, continued across flat terrain under a canopy of tall trees that tended to block out the sun, then skirted around the edge of Timber Crater and finally arrive at Highway 138, the east-west highway just north of Crater Lake. 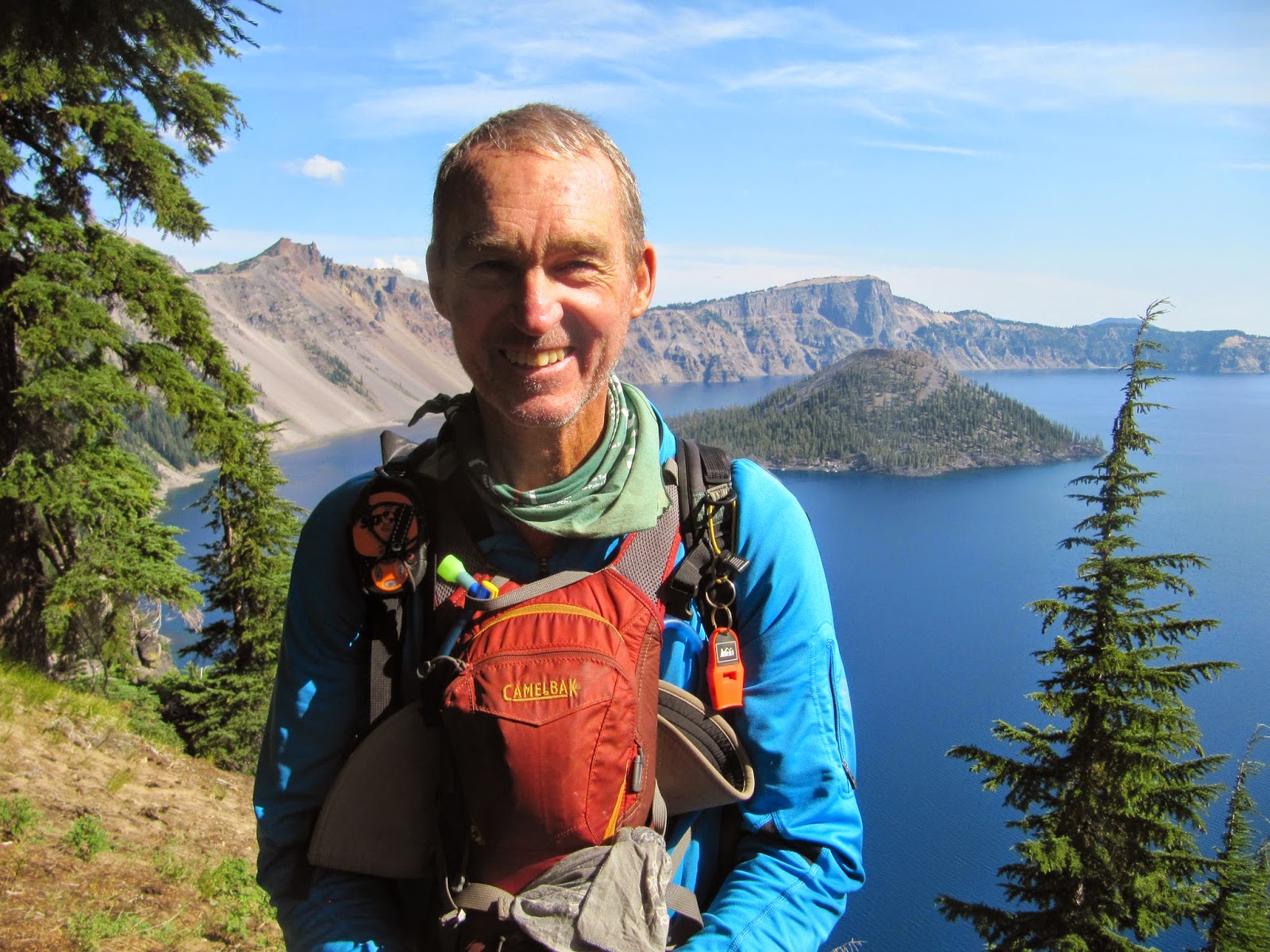 This is Crater Lake, with Wizard Island showing in the background. 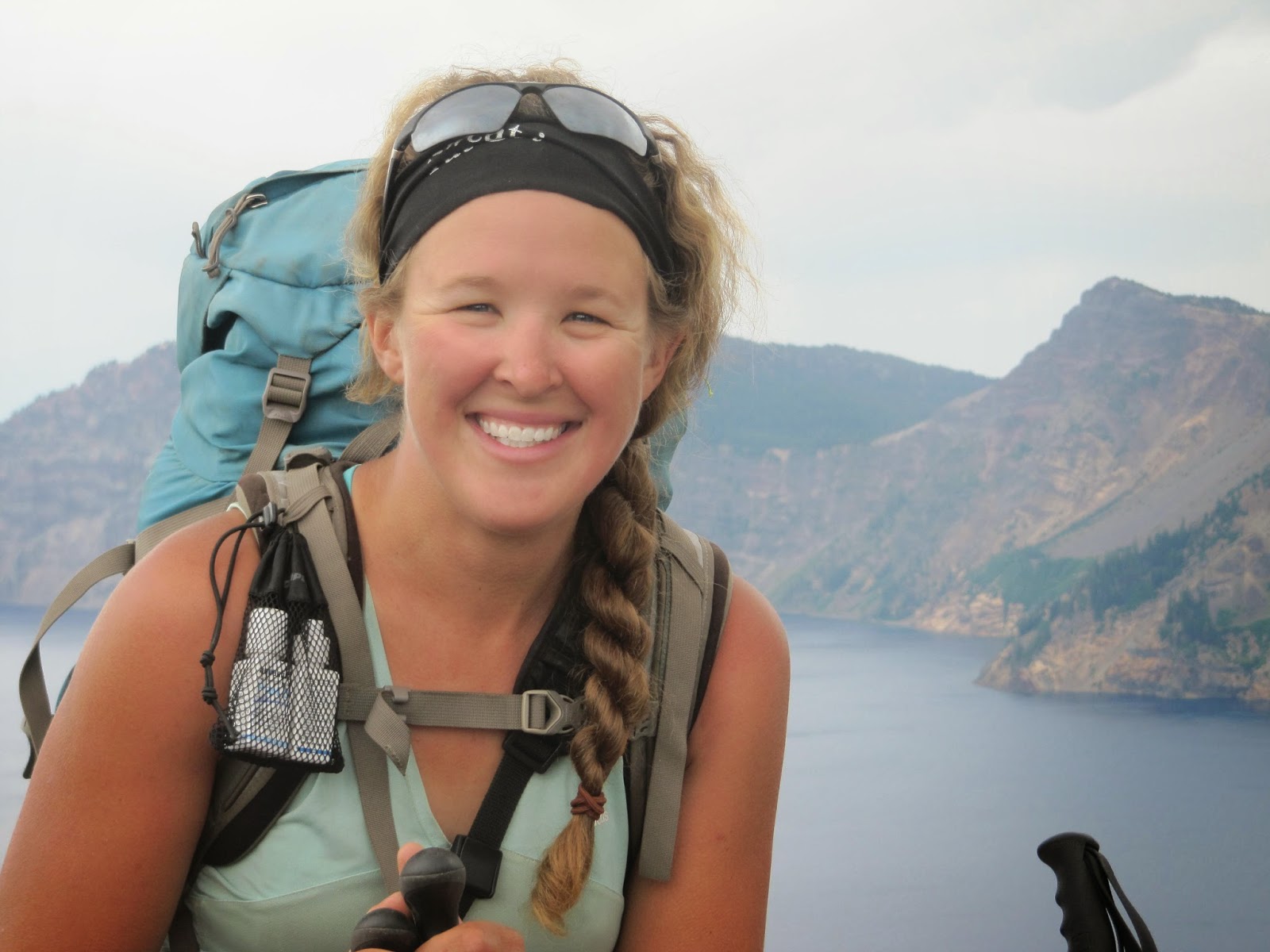 I walked with Cookie the four miles around the lake. At the Watchman Tower parking lot, some tourists wanted to have their picture taken with us, and we had them take these photos also. 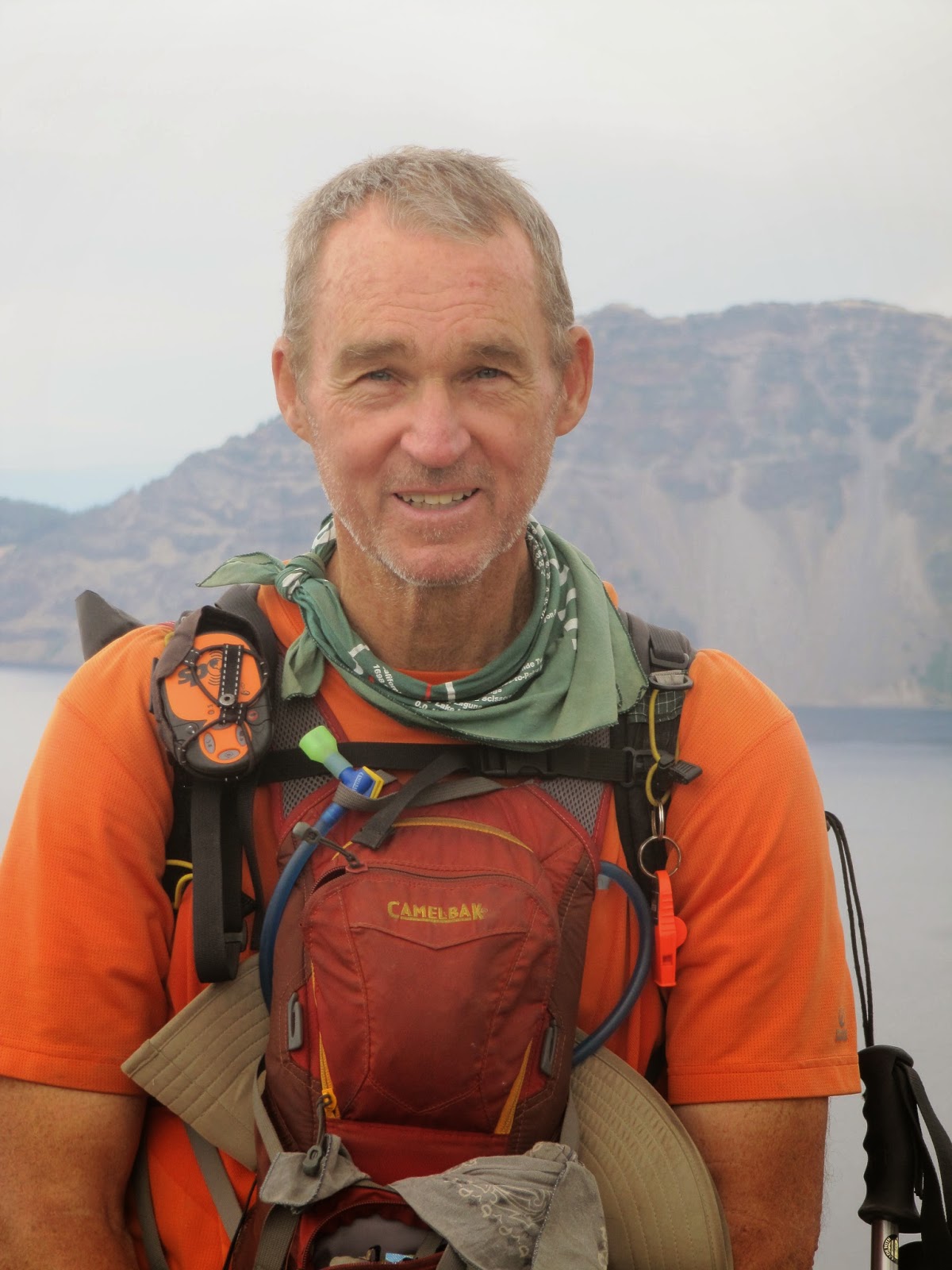 I can tell I'm steadily loosing weight. By the end of the journey in Canada, I had lost about 40lbs. I was down to my high school weight of 180 lbs.