Presently, Swiss Army came over the hill and descended the trail to the parking lot and joined me at the small table for cookies and lemonade.  Twenty minutes later, Fun Size joined us, and within another half hour, Sundog and his lovely wife, Giggles, were standing beside us.

The road leading into Etna twelve miles away was not a heavily traveled road, and of course, today being Sunday, there was no traffic at all.  Nevertheless, hitching a ride into Etna was the only way all of us were going to get there.  I thanked Kermit and June Bug for their hospitality and walked to the edge of the parking lot, set my pack down on the ground beside me, and prepared to solicit a ride from any vehicle that did come by.  In these extreme circumstances, when a ride was mandatory and the traffic was sparse to nonexistent, when I saw a vehicle approaching, I would place my hands together in a pleading fashion and seek to make eye contact with the driver, in order to make him or her feel guilty for not stopping and offering a ride.

I waited a long time, but patience paid off.  From far down the canyon road, I could hear the muffled roar of a high-powered pickup truck heading up canyon.  I prepared myself for the moment when the truck would crest the hill in front of me.  It topped the crest, but it didn’t continue towards me; instead, the driver immediately pulled over into the parking lot, exited his pickup, and announced that he could take all hikers into Etna.  He didn’t need to repeat himself, for within seconds, all five of us were huddled around the bed of the truck, vying for a seat.

I sat in the front seat with the driver and he told me he was the shuttle driver for the Alderbrook Manor Bed and Breakfast in Etna, where most of the hikers would be staying.  He said he was returning from a shuttle from over the other side of Etna Summit where he had delivered Yashinka to a commune.  From the townspeople in Etna, Yashinka had heard about the commune and wanted to go there to interview and photograph the members for possible inclusion in the article he’s writing.

The driver stopped in front of the Alderbrook Manor Bed and Breakfast located just on the edge of town; the five of us jumped out of the truck and fire-lined the backpacks from the bed of the truck to one another.  Before departing, the driver announced that he was available to shuttle all of us back to the summit tomorrow morning at five dollars a head.  Among us, we agreed on his services and set the time for 10:30 a.m.

I followed the others through a wooden gate into the yard on the side of the B&B and found a convenient place to set my pack down.  Now that I was here, it was time to make inquiries as to the protocols regarding visitation and overnighting on the property.  The B&B owners and our trail angel hosts were Dave and Vicky Harrison.  Dave came out on the side porch and explained to the newcomers how things work at the Hiker Hut – the portion of the B&B devoted to hikers.

The Hiker Hut, which was just behind the group listening to Dave, appeared to be a remodeled tool shed, which had bunks, sheets, blankets and pillows, for a cost of twenty-five dollars a night and could accommodate four.  If a hiker didn’t want or need a bunk, we could sleep on the grass in the vast expanse of the backyard for fifteen dollars.  Showers in the Hiker Hut were free, and laundry, which included use of the dryer, was three dollars.

“Everything was on the honor system," said Dave, “and after you’ve decided what accommodation and services you want come into my office to pay and get a receipt.”

“Also," he continued, “if you want to go into town, there are loaner bikes just outside the gate.”
Swiss Army and I elected to sleep on the lawn way out in the backyard, as did most of the hikers.  We also elected to do our laundry.  We paid Dave and hustled out back to claim a spot on the lawn.  Of course, there were ants to greet us.

Several days ago, it was Runs-with-Elk’s twenty-fourth birthday.  I told her and Cookie that when we arrived in Etna, I would treat us all to milk shakes.  The two of them had their tents set up in a different part of the yard, and when I asked them if they’d like to take bikes and ride into town with Swiss Army and me for shakes and burgers, they declined, saying they’d already had lunch, and would have to take a rain check.

The local burger place was called Dotty's and was located on the other side of town.  Our shuttle driver had given us a quick tour of the town before dropping us off at the B&B and pointed out the post office, the grocery store, Dotty's café, and Bob’s Ranch House restaurant.  Swiss Army and I grabbed loaner bikes and headed into town.  We both enjoyed the biggest hamburger and milk shake Dotty's could fix for us.

On our way back to the B&B, Swiss Army and I rode our bikes leisurely through town, observing the quaint architecture of the turn-of-the-century buildings, and making a brief stop at the only grocery store in town.  In front of the store, sitting on the sidewalk were hikers Biers and Ranch, Viking, Feather – a Norwegian hiker, and Siesta.  Swiss Army and I walked the aisles of the store looking for just the right combination of comfort food to buy and take back to our camp on the B&B lawn; I eventually settled on a box of cookies and a quart of chocolate milk – what else is new? 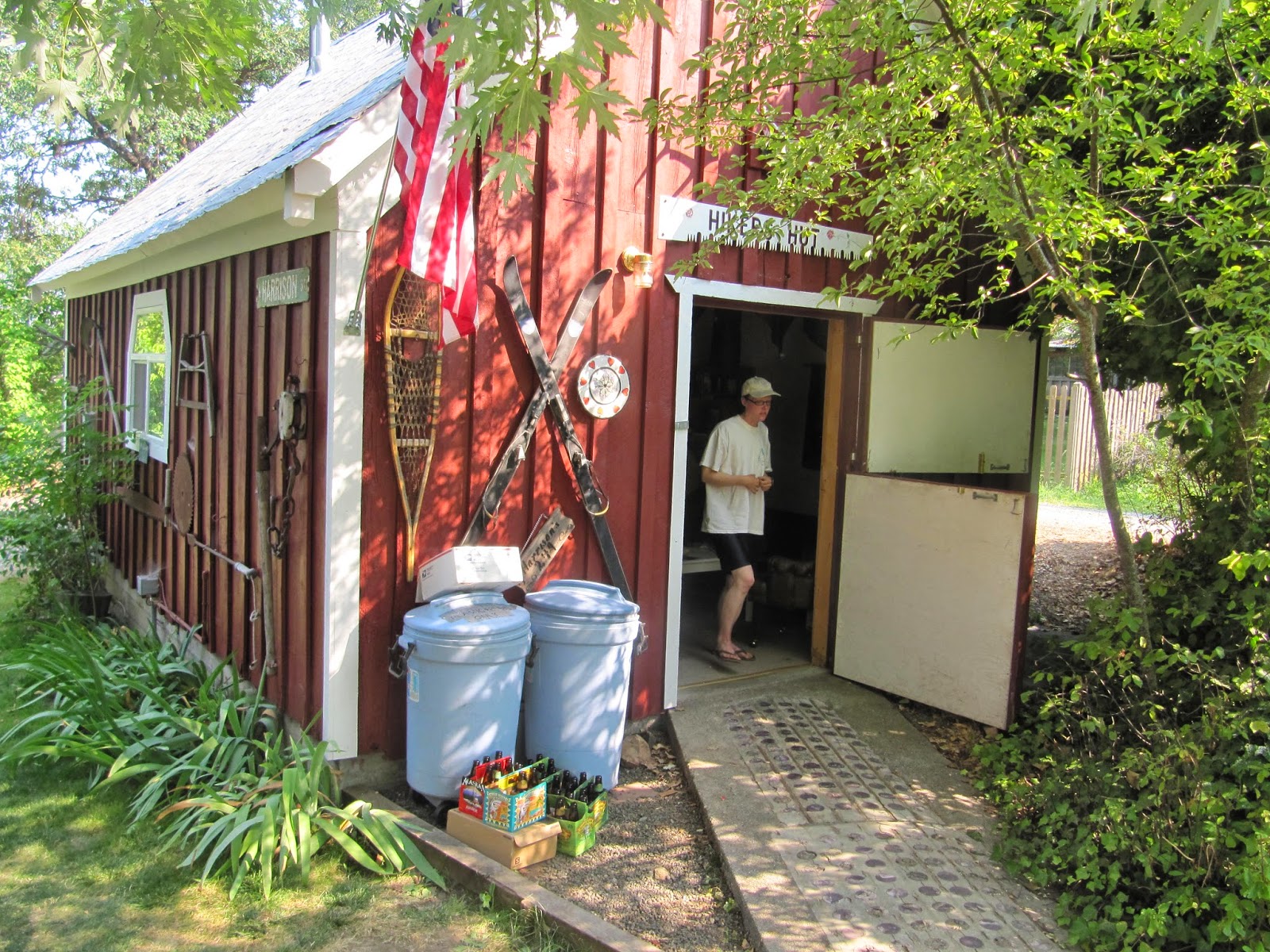 The Hiker Hut at B&B. For $25 a night, a hiker could have a bed with clean sheets. Inside, for all hikers to use was a shower and toilet, and small kitchen. 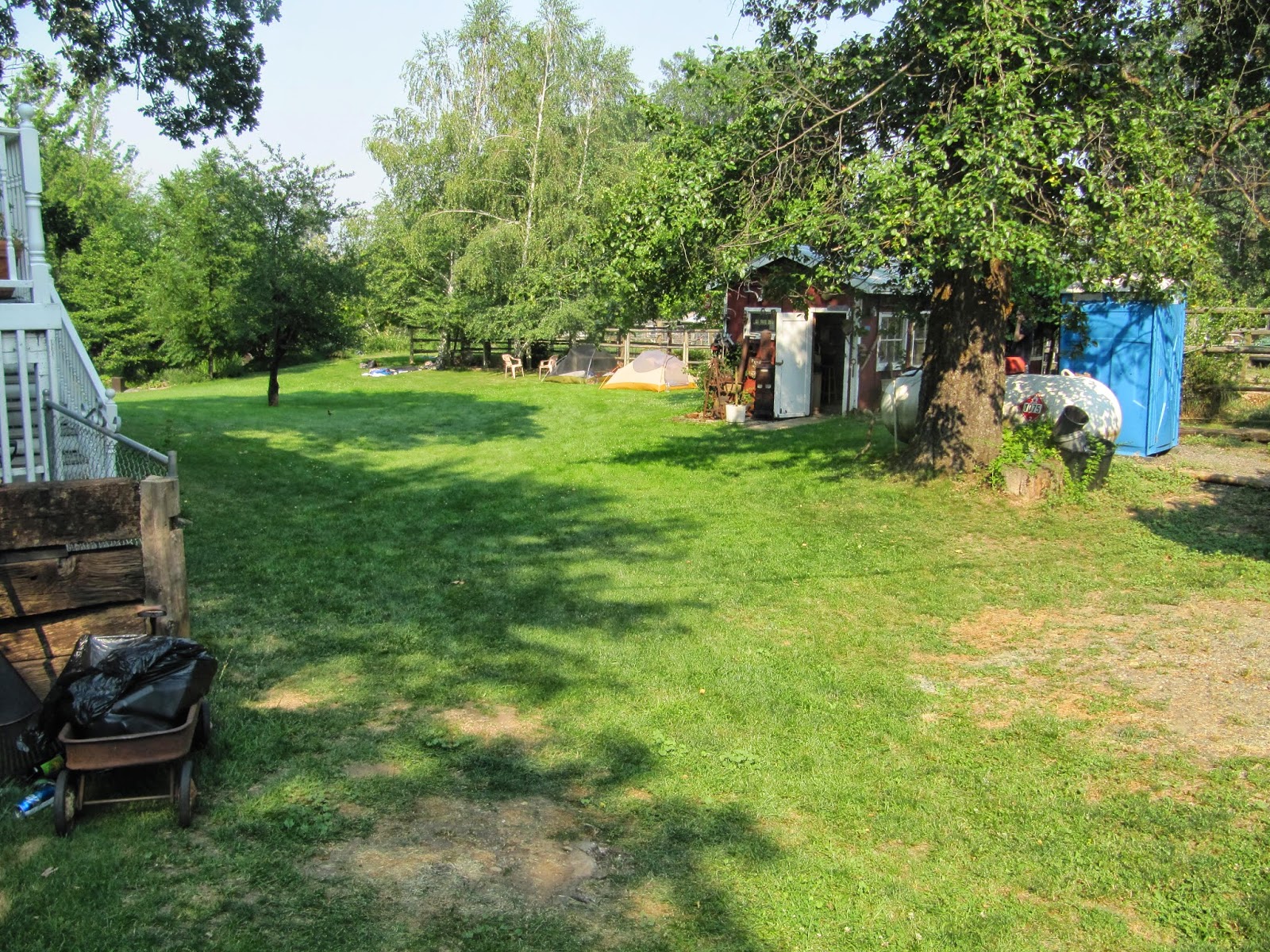 For $15.00, hikers could camp out on the spacious lawn behind the B&B. 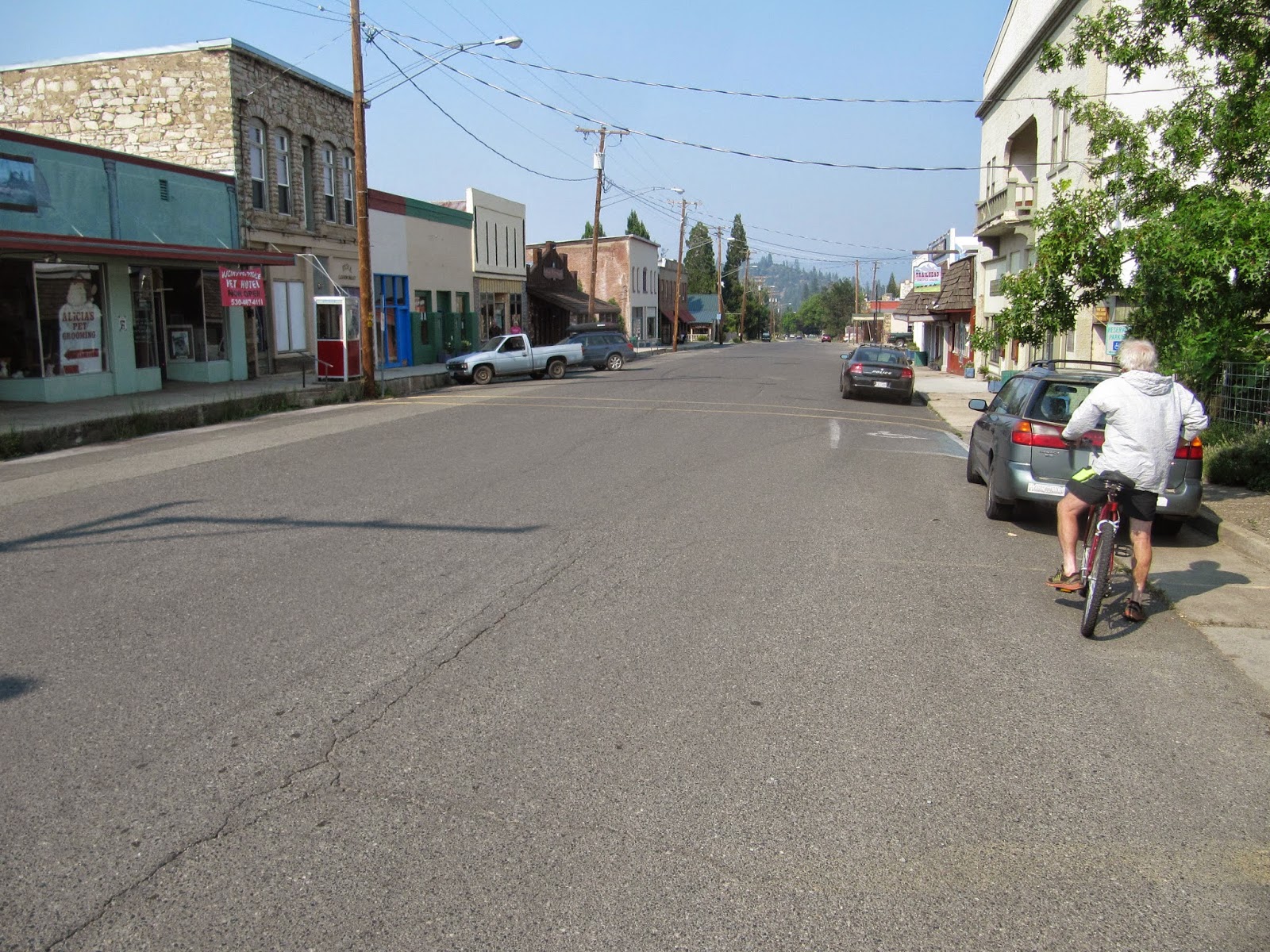 Swiss Army and I rode loaner bikes into Etna, to check out Dottie's place for Chocolate Shakes. 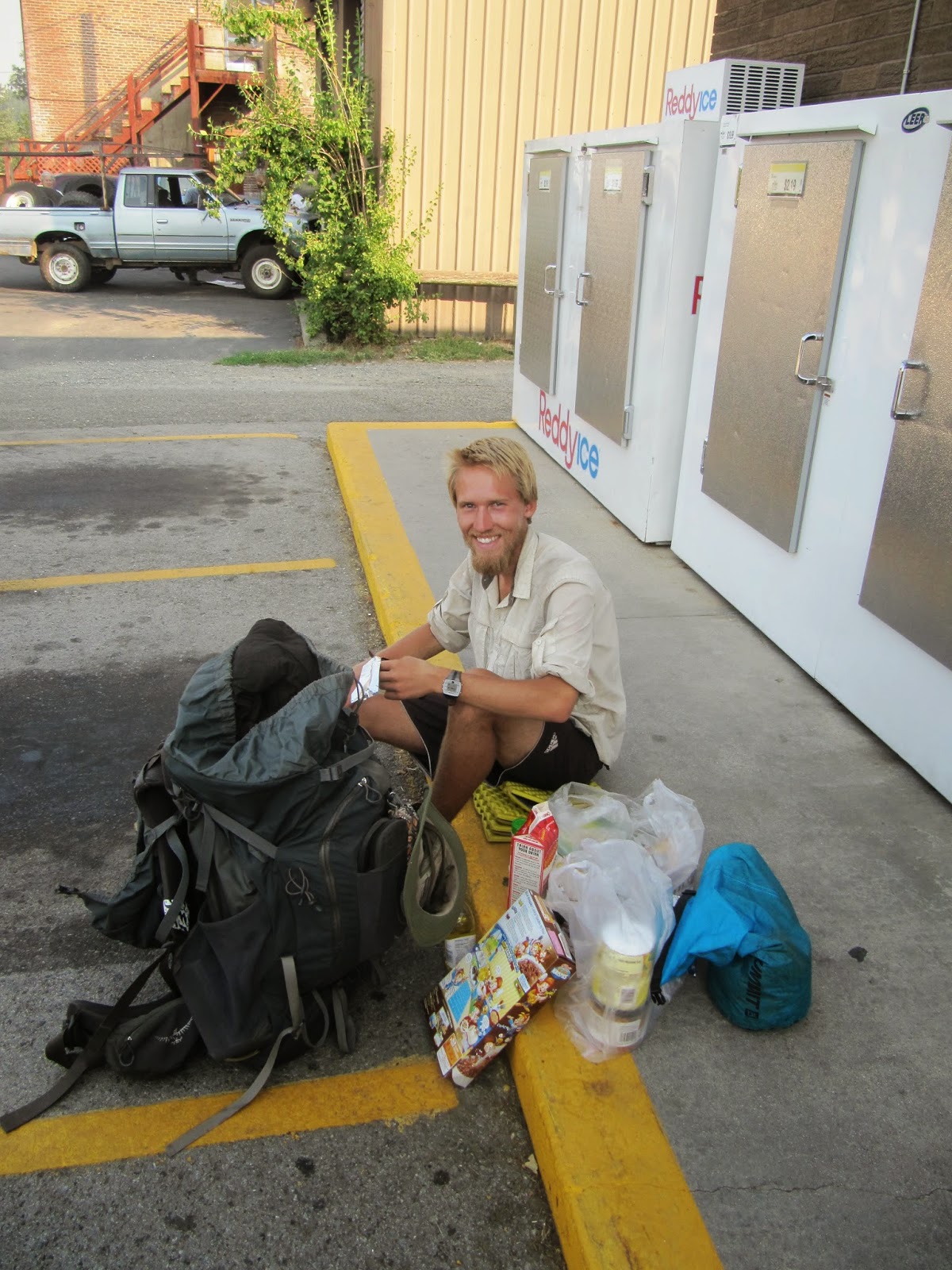 At the local grocery store, I met Feather for the first time. Feather and his friend Laptop are from Sweden. 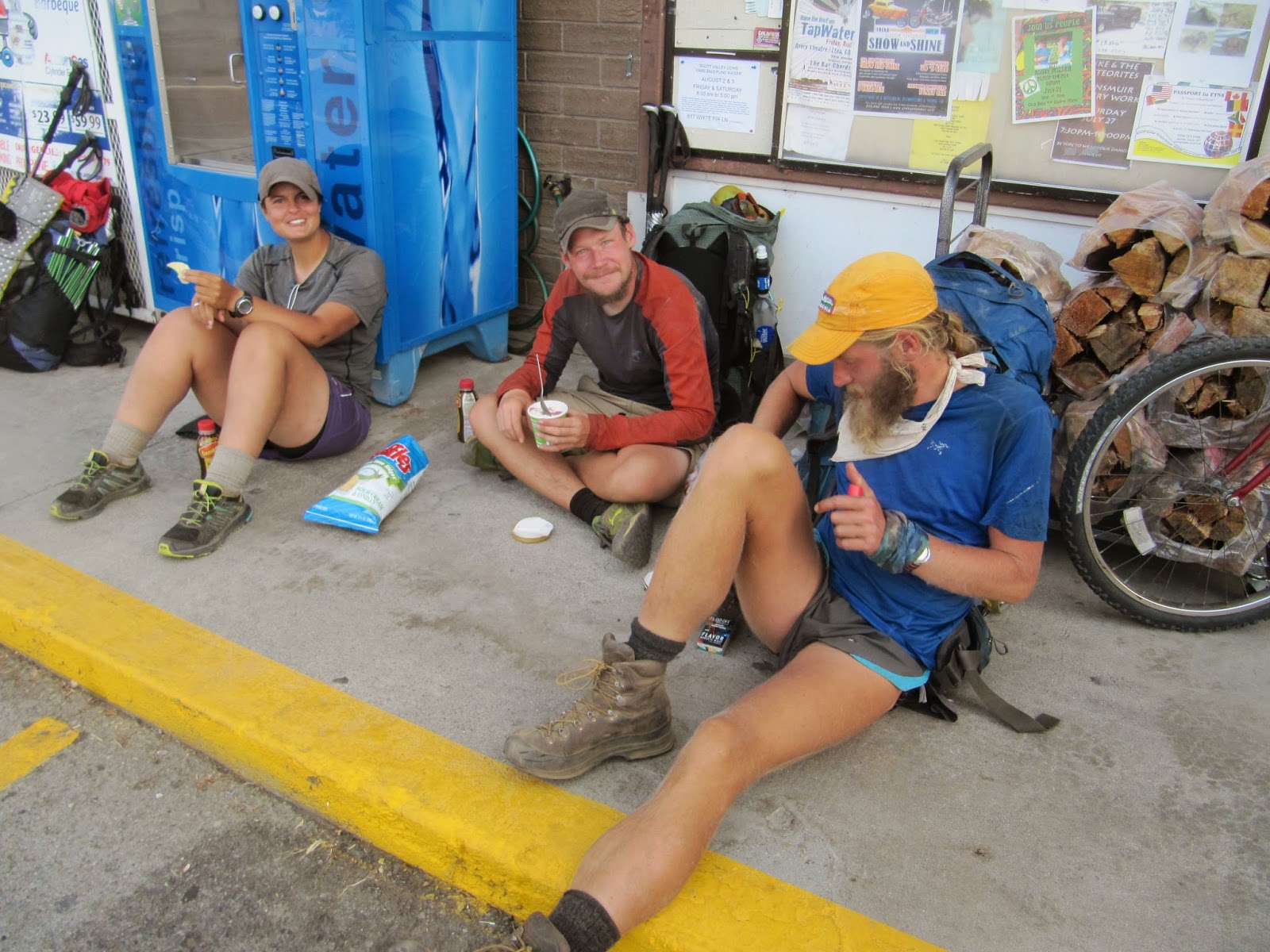 At the same store at Feather, I found Ranch, Biers and Viking. All are from Germany. 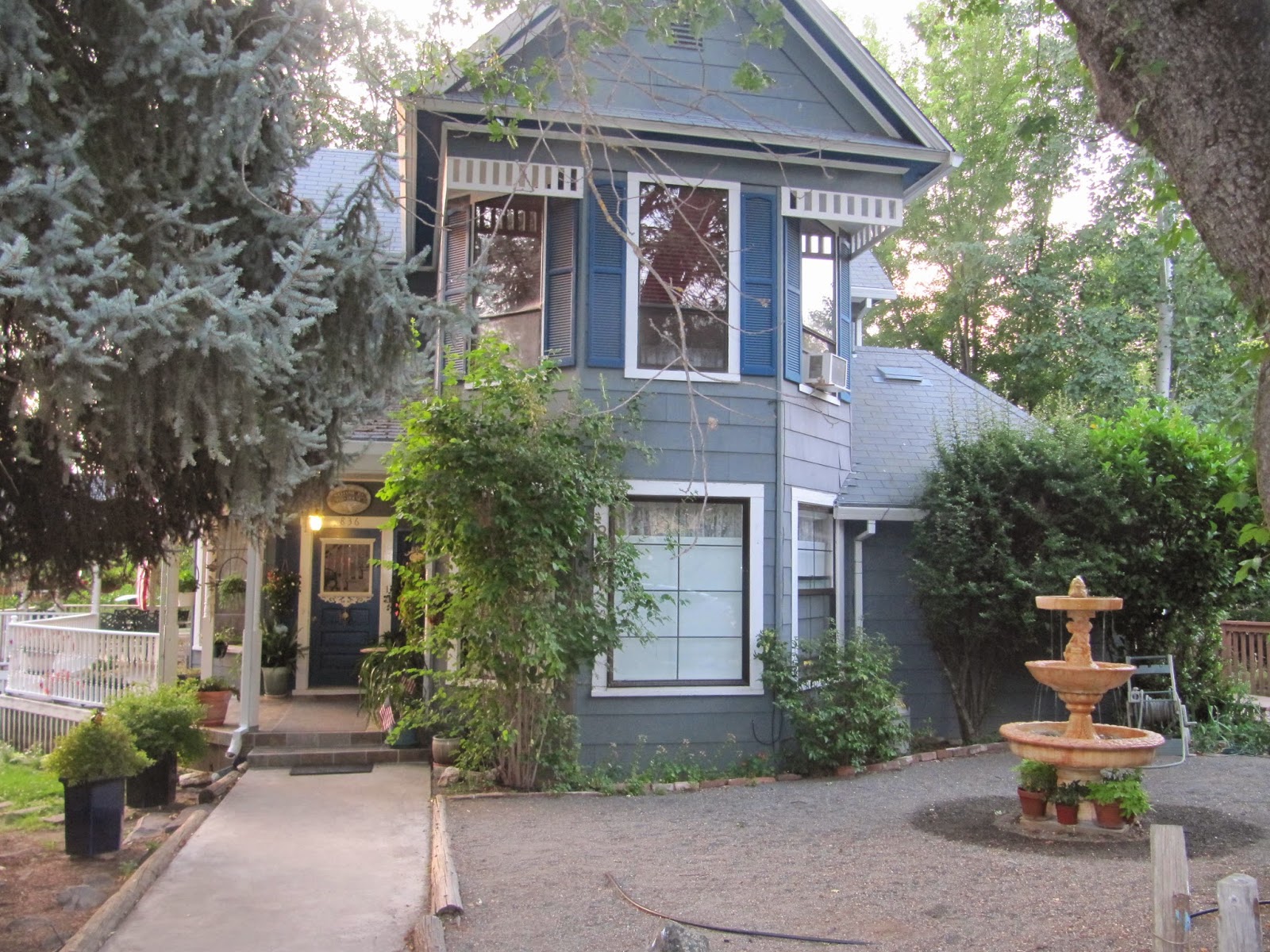 This is the elegant Victorian Alderbrook Manor B&B, owned and operated by Dave and Vicky Harrison. 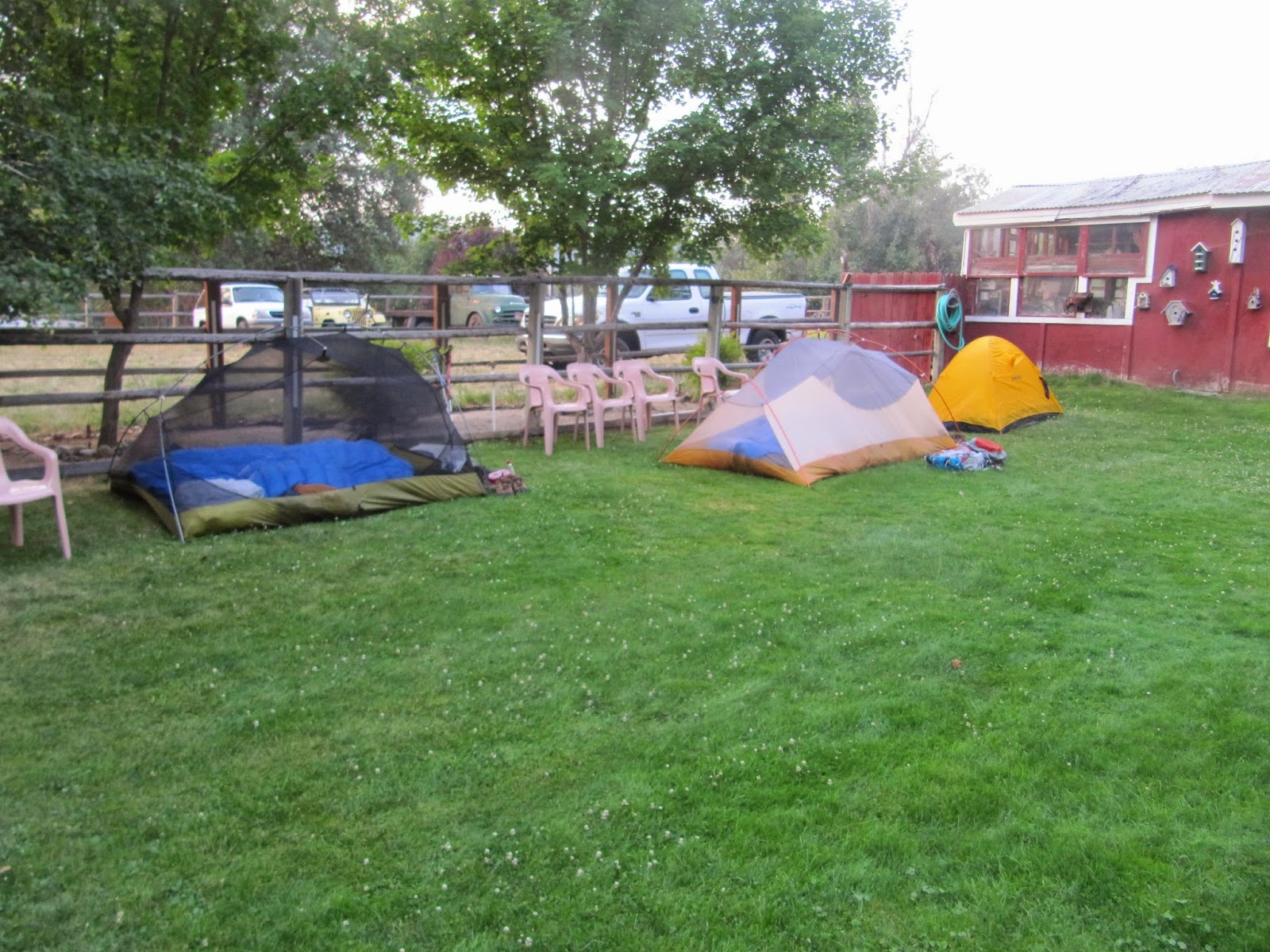 The back lawn of the B&B was great to camp on, but guess what, there were ants, and lots of them, plus ravens, that would snatch things from your pack if you left it unattended.